Time to head away on a multisector trip, it had been a while since I last did one of these and it was a trip I had been bidding for too! This trip was starting off with a layover in Singapore, continuing on for a layover in Brisbane before heading back to Dubai directly. I love this trip as I have my friend Matt in Singapore and also my old flat mate Hannah who I lived with for three years in Dubai who relocated to Brisbane with her boyfriend Dustin, so it works out nicely for me does this trip! What’s a shame is that this trip is getting stopped from mid March so I wanted to try and do it one last time before these flights are cancelled.

Departing Dubai at 21:00 it was a lovely six hours and fifty minutes over to Singapore Changi Airport. Landing at just before 8am, we went through immigration and checked into the hotel where I got a couple hours sleep before meeting a few of the crew in the lobby.

We had decided to go for lunch before going for a wander around Singapore. The captain, Gareth, had recommended we had a street food place not far from the hotel that had communal seating and different vendors that you could purchase from. I was super keen, but after speaking with the concierge he said many things wouldn’t be open until the evening but recommended a similar place in the heart of the city.

So we jumped in a taxi and went over to Lau Pa Sat instead when the biggest downpour ever started, and it just did not stop. The short run from the roadside to the inside of Lau Pa Sat had you soaked and you were only out there for a few seconds, thankfully we were stopping for food otherwise this wouldn’t have been great. 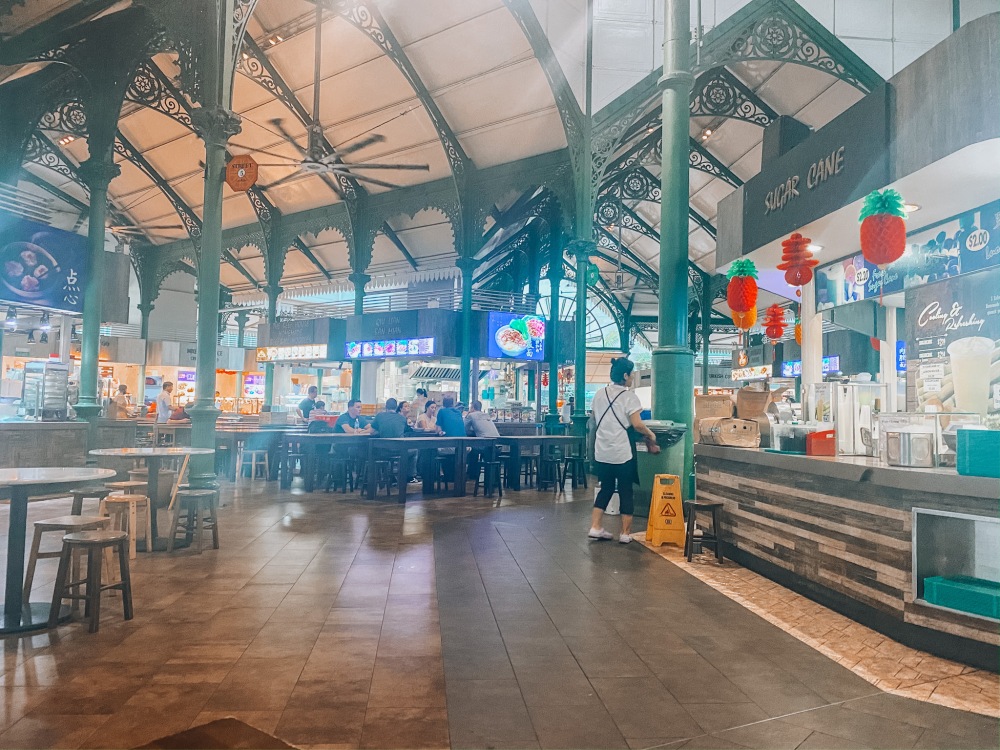 We grabbed a table and everyone headed off in different directions coming back with different food items. I opted for grilled calamari with morning glory and rice and it cost me just $8, and I couldn’t resist purchasing some spicy steamed wontons from another stall on the way back to the table for just $5 either!

We sat chatting away tucking into such a wide variety of dishes, the food was really good and cheap in price! Others had pad Thai, some had cornflake prawns and we all shared our dishes around sampling a taste of everything. Highly recommend visiting here if you’re doing Singapore on a budget.

When the rain eventually stopped we decided to walk down to the Gardens By The Bay, I’d actually not wandered into the gardens before despite being in Singapore numerous times. We went down through the financial district and into the bay to the most wonderful view of the gardens.

What I love about the gardens is that they’re free to enter and walk around! It’s just the other activities that you can do within the gardens that cost. 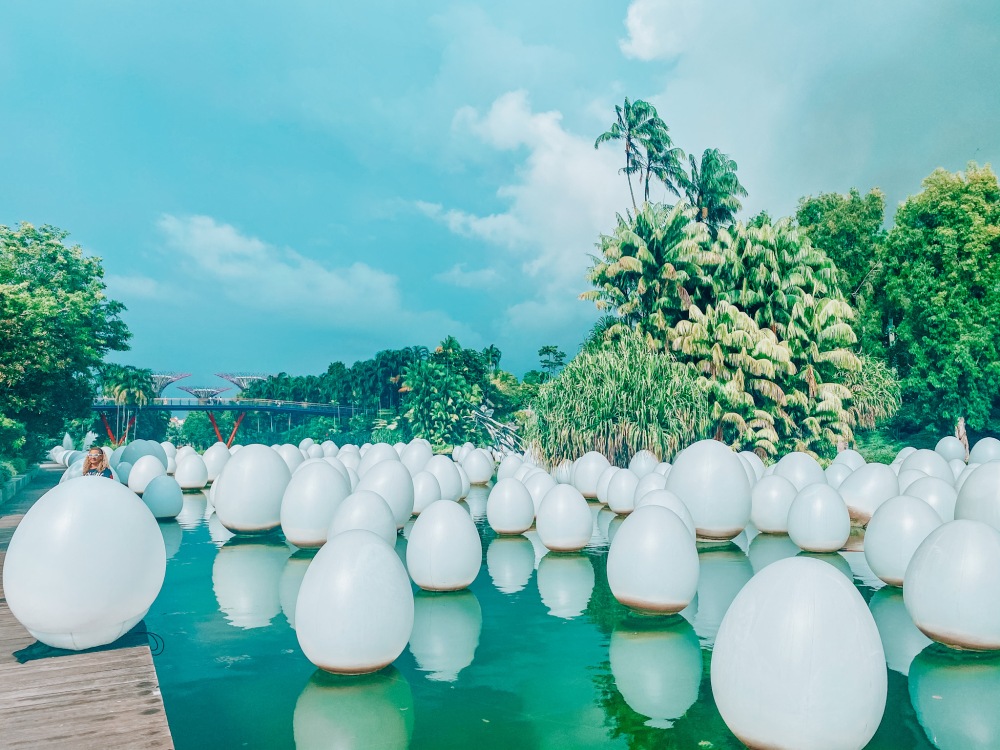 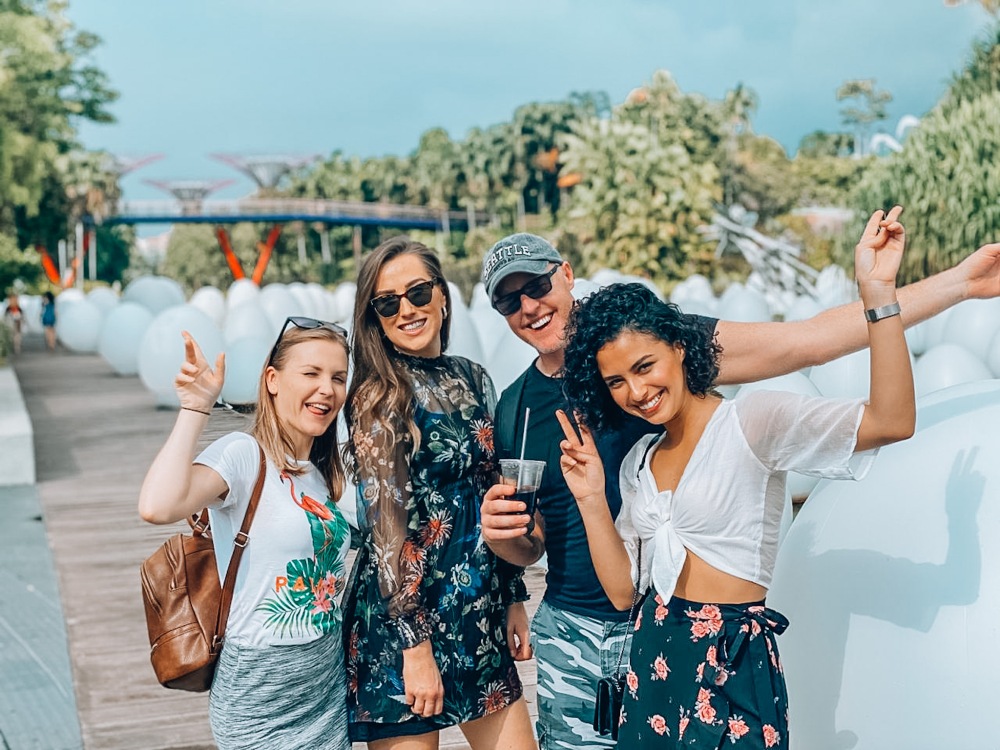 The weather was heating up and we all decided it was time for a well earned ice cream! Couldn’t deny cooling down with some cookies and cream. 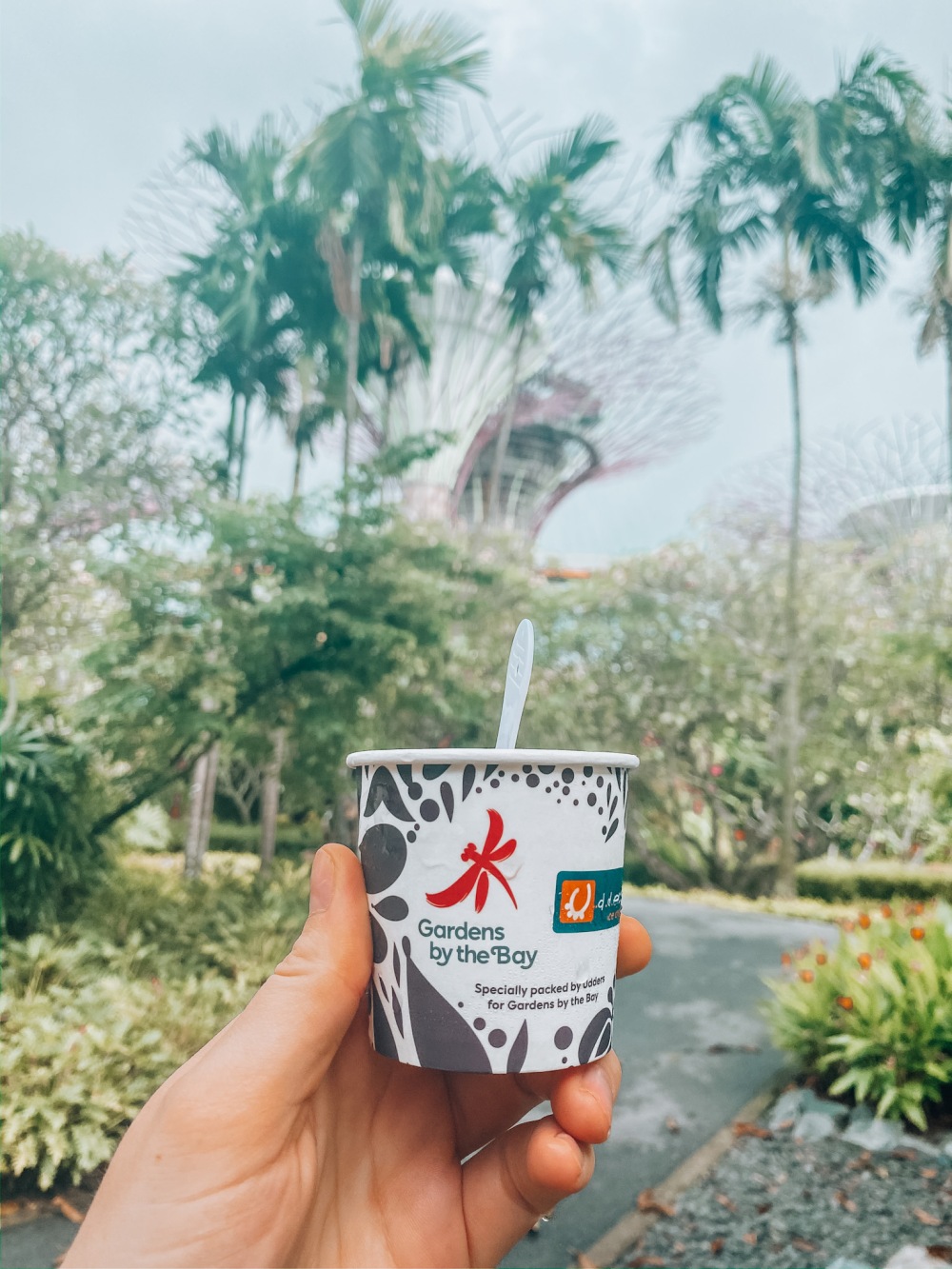 Heading towards the ever impressive supertree grove probably the structure that people resonate most with the gardens we continued on eating our ice creams. 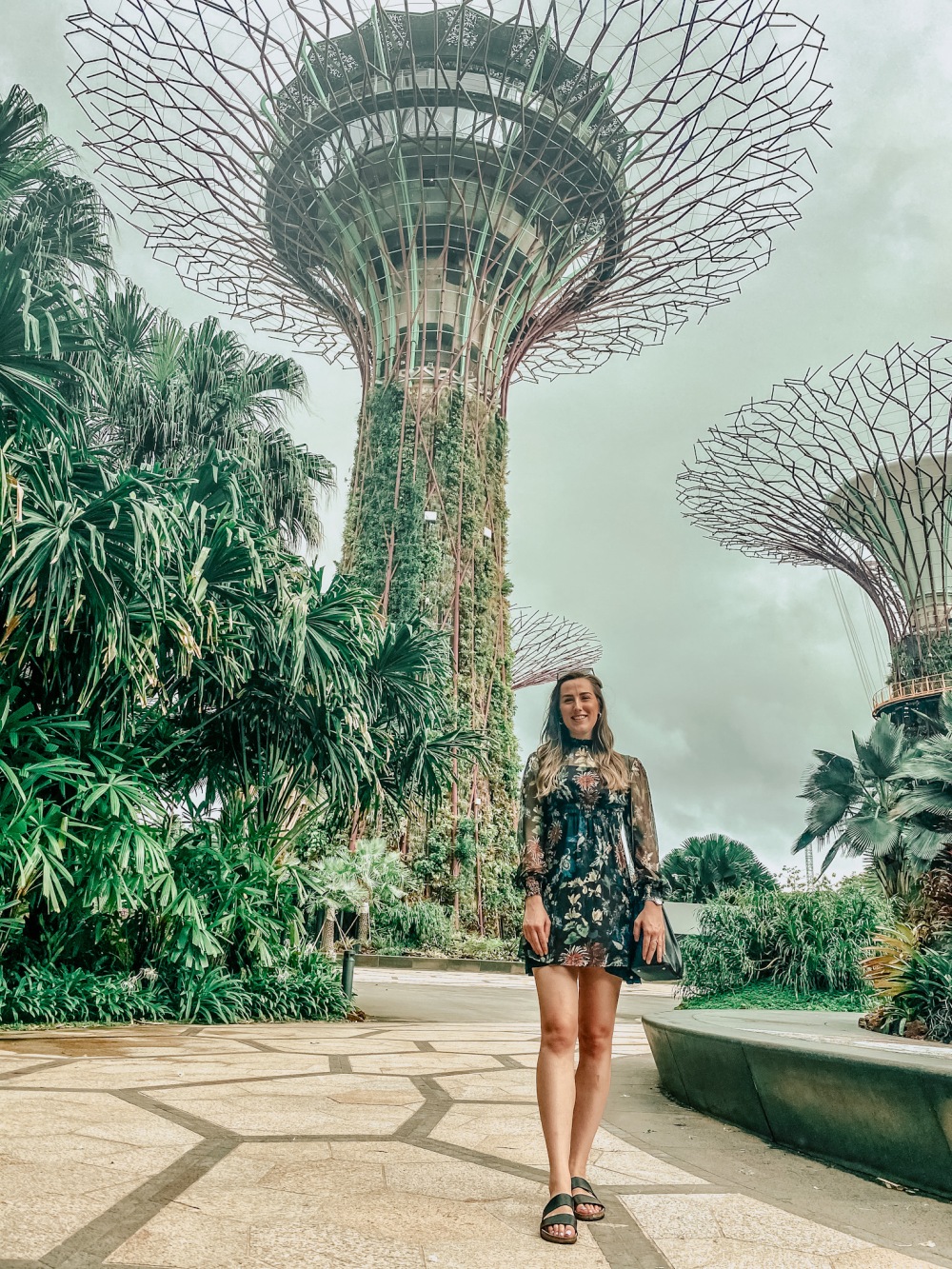 It appeared the rain hadn’t stopped for good when out of nowhere with not really anywhere to shelter we got stuck in the biggest downpour I have seen for a long time!

We were now absolutely drenched and I was getting eaten alive by mosquitos. Desperate to get out of the rain and away from getting eaten alive I suggested we head to Lantern a bar at the Fullerton Bay Hotel which my friend Matt had taken me and my sister when we were in Singapore for some shelter and a well earned beverage.

One thing that was quite strange but I guess a good strategy being implemented was that before we went into the bar we had our temperature taken and we had to leave our details with the issue of coronavirus getting worse around the world and especially as we were in Asia! Good to know precautions were in effect though.

My friend Matt then came to join us when he had finished work and a couple of his friends from home were also in town as they’re away travelling and the whole group of us then went out to dinner to a place called Clarke Quay.

Clarke Quay to say it was a Tuesday evening was super busy and had an abundance of restaurants to choose from. We opted for a place called RENNThai and grabbed a table out by the water. I went for the Pad Thai as the small taste I’d had at lunchtime had given me a craving and we sat chatting away into the night! 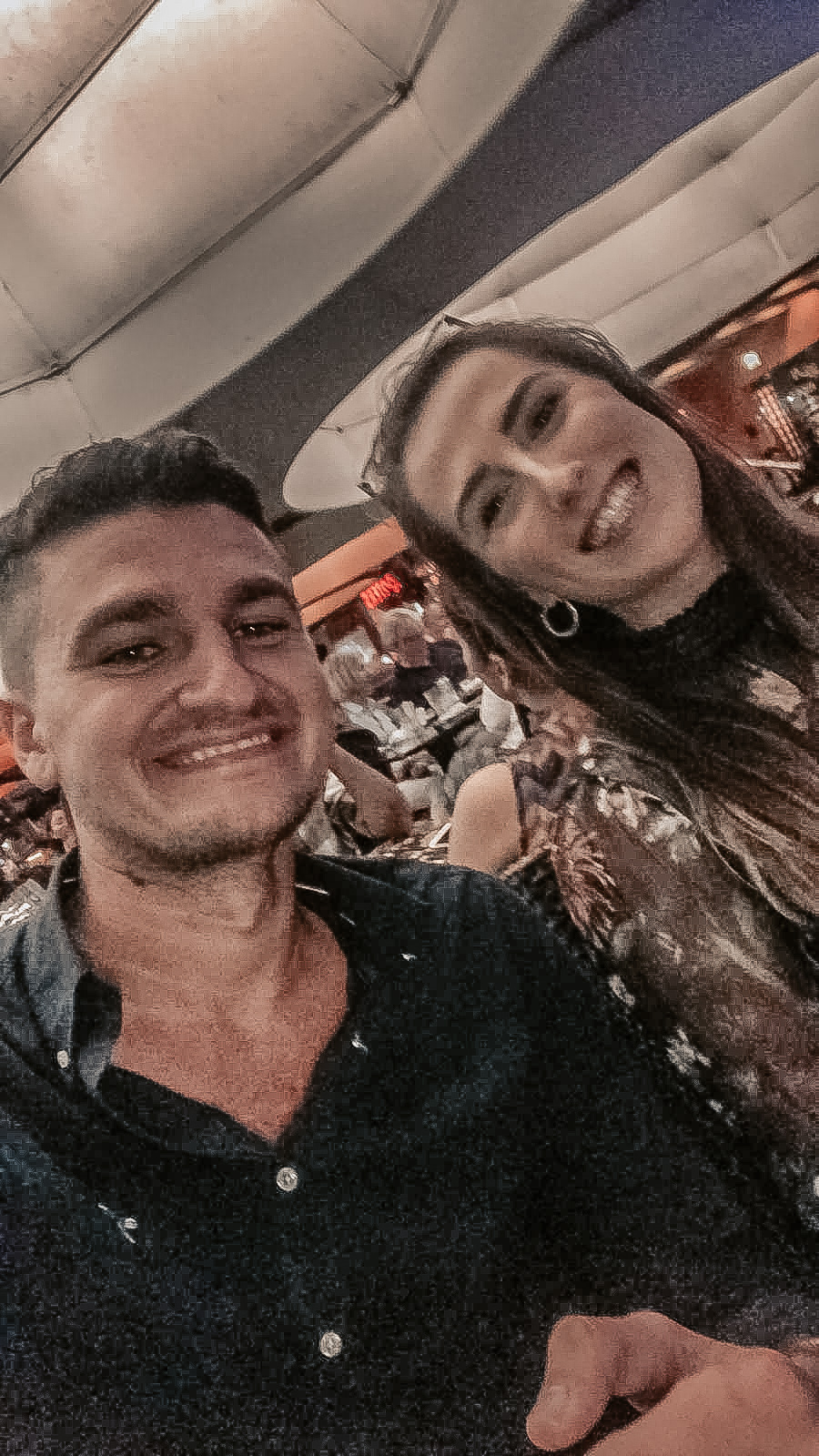 Soon enough all the crew were struggling to stay awake after a long day, a night flight and a short power nap and we went back to the hotel to get a good night’s rest before the early wake up call the following morning for our flight to Brisbane. I said goodbye to Matt not knowing when we were next going to see each other, it had been a whole year since I’d seen him last on his holiday in Dubai!

The next day we flew the lovely seven and a half hours over to Brisbane International Airport where we again landed to the constant showers in the evening. The only plans I had for this layover were to catch up with my best friend Hannah after she relocated there last summer and have a day doing whatever it was we wanted. So I don’t have much to write up on about Brisbane unfortunately, I’m sure it won’t be long before I’m back again though!