An afternoon departure out of Dubai at 16:30 in the afternoon with a nice and easy five hours over to Moscow Domodedovo International Airport in Russia. Landing in the evening, it was rather late by the time we got to the hotel so I ordered some room service before calling it a night.

The next morning, I met three of the crew downstairs to brave the cold and go out and do a little sight seeing. I’d seen Moscow before, but I wanted to get out and stretch my legs and eat some Russian cuisine. We jumped in a taxi and headed in the direction of the Red Square.

The Red Square is a city square in Moscow, Russia. It separates the Kremlin, the former royal citadel and now the official residence of the President of Russia, from a historic merchant quarter known as Kitai-gorod. Red Square is often considered to be the central square of Moscow since the city’s major streets, which connect to Russia’s major highways, originate in the square.

We got out of the taxi and it was lightly snowing and with all the Christmas lights and trees it felt super festive. 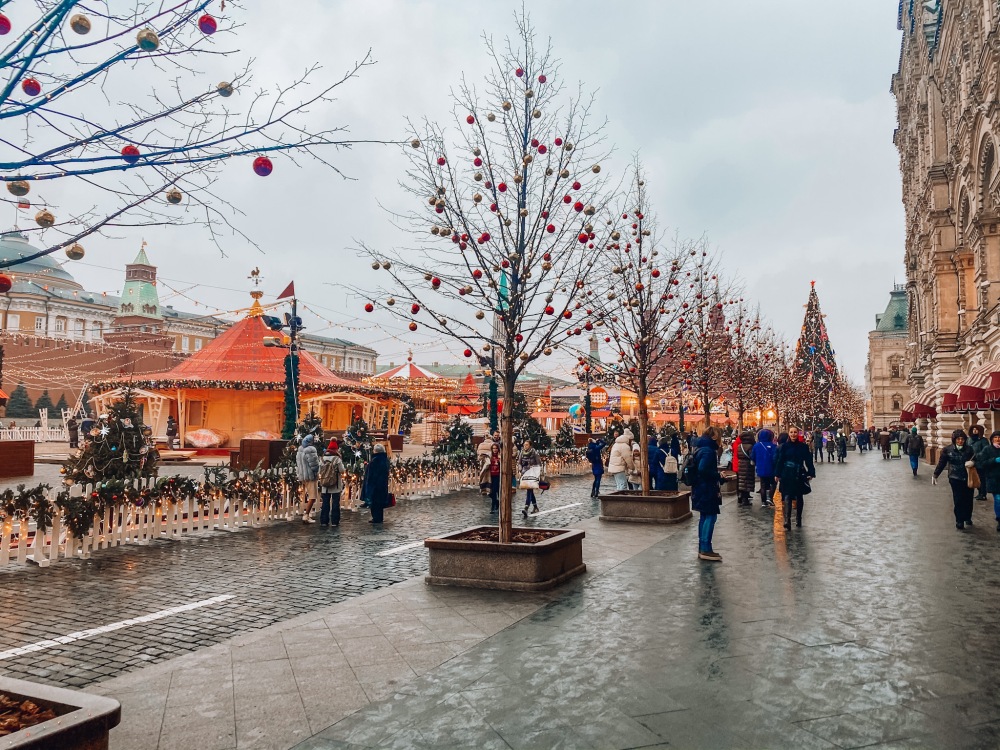 Before we made our way over to St Basil’s Cathedral to admire it in all its beauty. 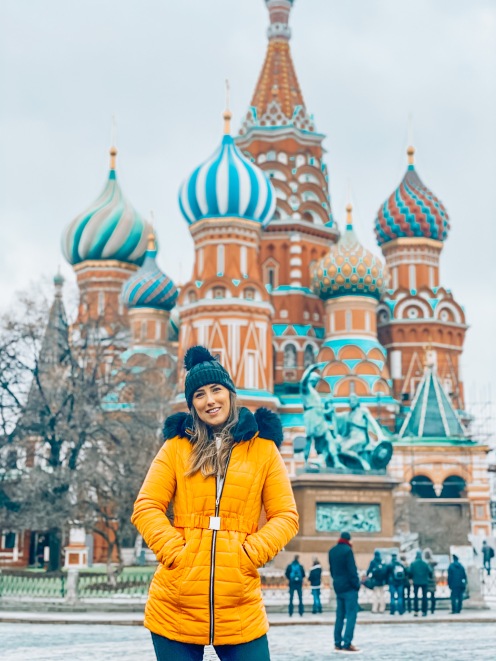 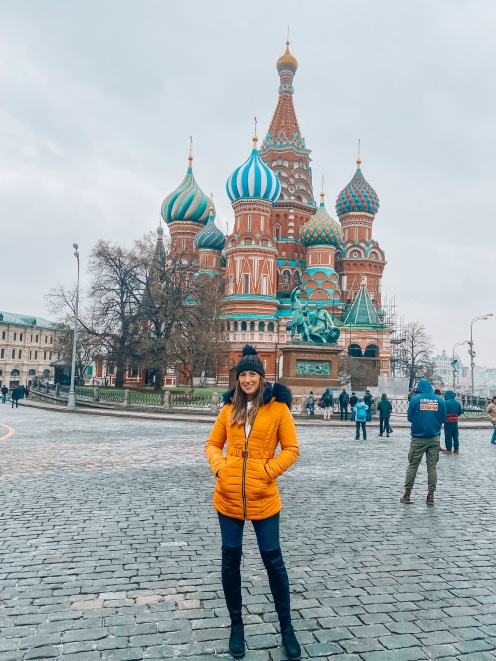 The Cathedral of Vasily the Blessed, commonly known as Saint Basil’s Cathedral, is a church in Red Square in Moscow, Russia and is regarded as a symbol of the country. The building, now a museum, is officially known as the Cathedral of the Intercession of the Most Holy Theotokos on the Moat  or Pokrovsky Cathedral. It was built from 1555 to 1561 on orders from Ivan the Terrible and commemorates the capture of Kazan and Astrakhan.

Needing to move around as the zero temperatures were beginning to make us rather cold, we walked past the Christmas Market which was sadly still under construction. Russia celebrates an Orthodox Christmas so it was a little early to be fully open. 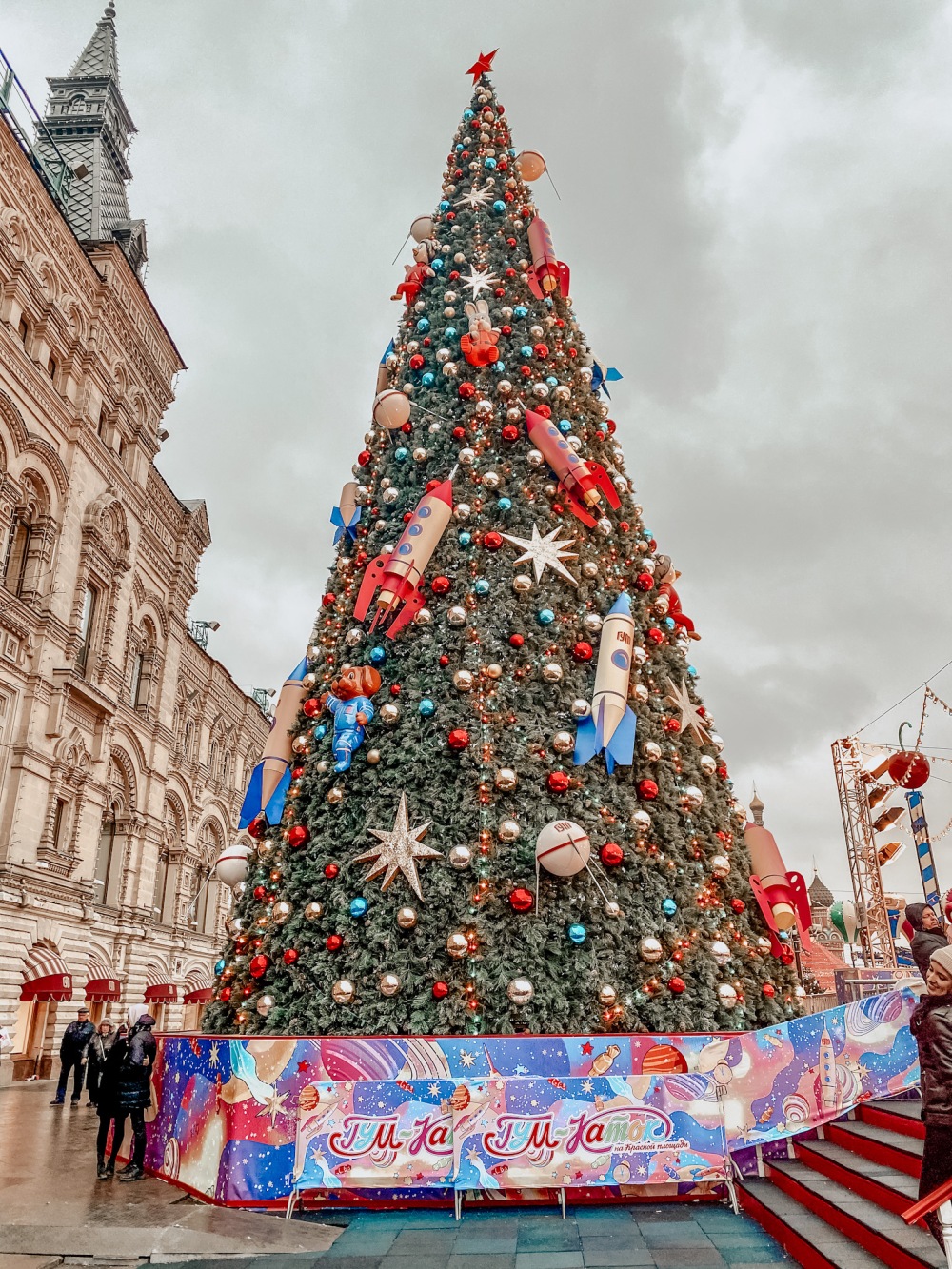 We walked down the main high street that was completely covered in twinkling lights. It was such a nice touch, and despite it being a cold and wet Sunday morning there were an abundance of people wandering the streets.

Desperate for a morning coffee and something to warm us up in the cold streets of Moscow, we ducked into a nearby cafe for take out coffee to take with us through the Christmas stalls inside the mall.

Soon after we were all ready for some lunch and we had found a good place online that served up an abundance of local dumplings, something we were all craving for and wanting some Russian cuisine. We opted for a place called Pelmini and all four of us piled around a table. I chose a chicken noodle soup to warm up with and some Siberian dumplings and my favourite from when I was in Georgia earlier this year, Khinkhali.

Food was amazing and I left feeling so full and sleepy ready for a nap before the night flight back to Dubai. A wonderful layover, very cold but nice and laid back and filled with good food. As always, feel free to follow me on Twitter, Instagram, Facebook and YouTube:
www.twitter.com/Jessicaaahhh
www.instagram.com/Jessicaaahhh
www.facebook.com/JessicasJourneyWithEK
www.youtube.com/Jessicaaahhh123