My final flight of August and one that I was looking forward to too! A new destination for me as crew and I was heading to Vienna in Austria, however as you can probably tell from my blog post title, I had a different ideas for my layover.

Departing Dubai at 15:50 it was five and a half hours over to Vienna International Airport and I was also flying with my friend Anna which was so nice too. Landing in the evening, after I’d checked in at the hotel I was feeling sleepy and ordered some goulash soup from room service and went to bed knowing it would be an early start.

When my alarm went off at 6:30am the next morning, I wanted nothing more than to turn it off. But I powered through and got ready to meet Anna in the lobby so we could take the bus across to Bratislava in Slovakia. This would be country number 70 for me, so I was very excited! 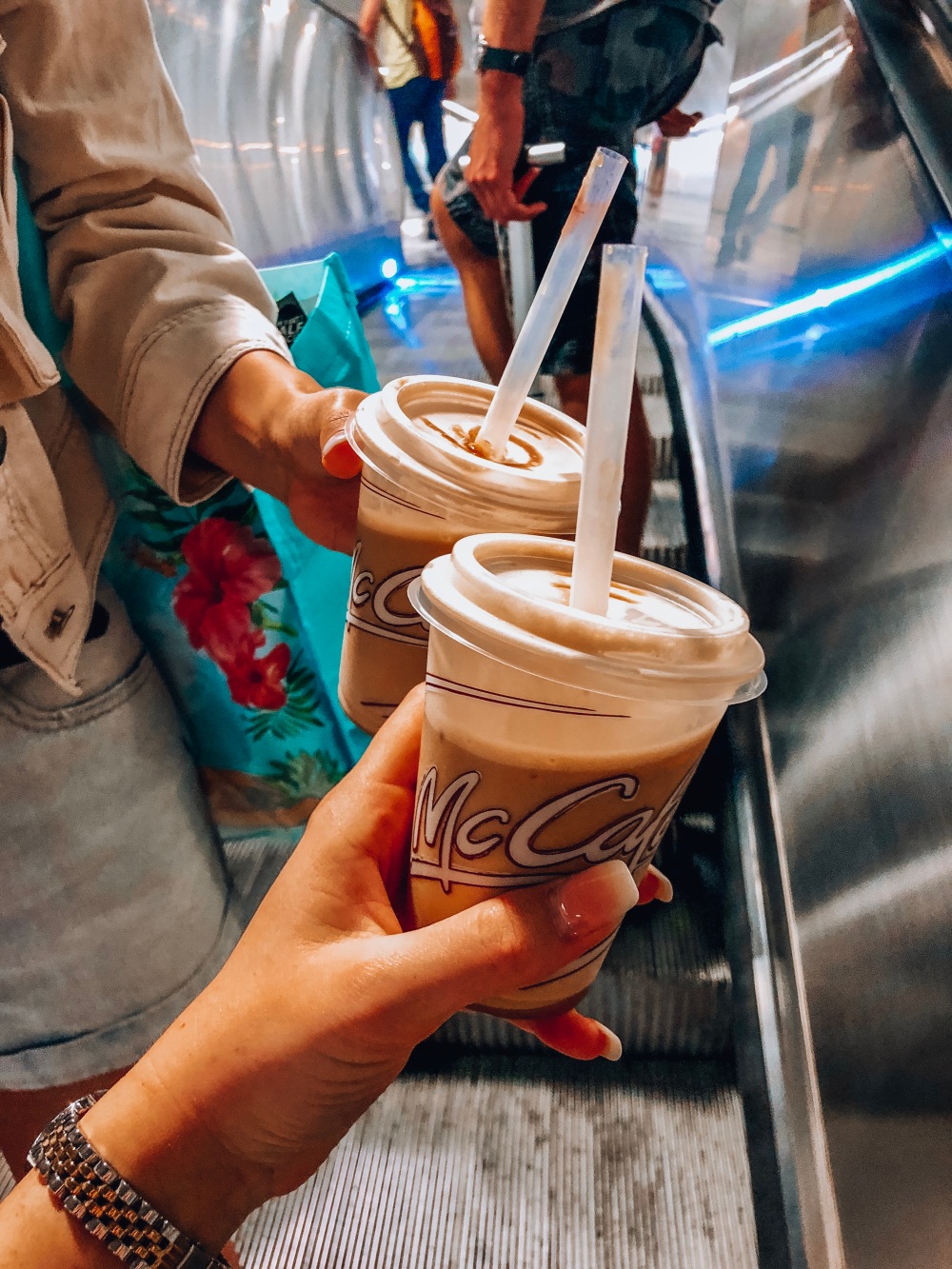 Iced coffees to power us through this early morning, myself and Anna had booked the coach with a company called Flixbus from Vienna Central Station to Bratislava Bus Station for €4.99 each way. The journey took around an hour and only had one stop in between the two stations.

We pulled into Bratislava just after 9am and we said our goodbyes as Anna was going to see her grandparents who lived in Bratislava, and I was going to explore. I looked on google maps and it was a half hour walk to the old town and with it being glorious blue skies and the sun shining, I set off on my way. 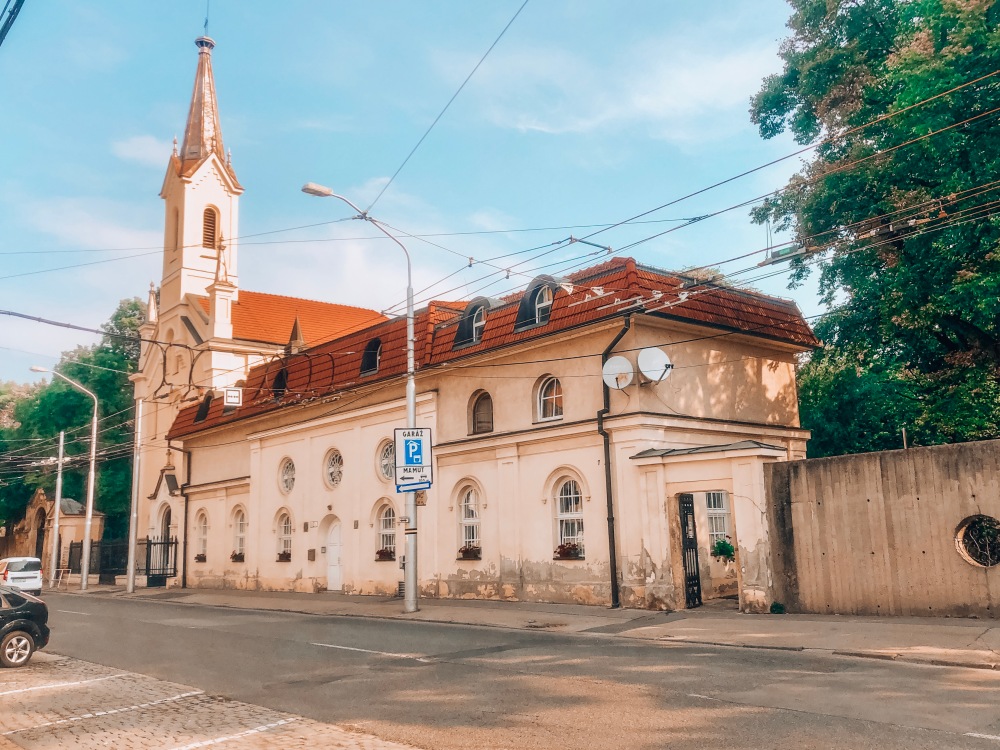 I was pretty hungry and was on the search for a place to eat breakfast, and as soon as I stumbled into the Old Town I came across a place called Urban Bistro. I’d seen this recommended online and with a few tables outside in the sunshine, I grabbed one and ordered an early grey iced tea which came served in a glass mug of early grey tea, honey, ginger and lemon juice and ice and then the Australia, Say Hello! for breakfast which was poached eggs, fried mushrooms and toast with avocado purée. 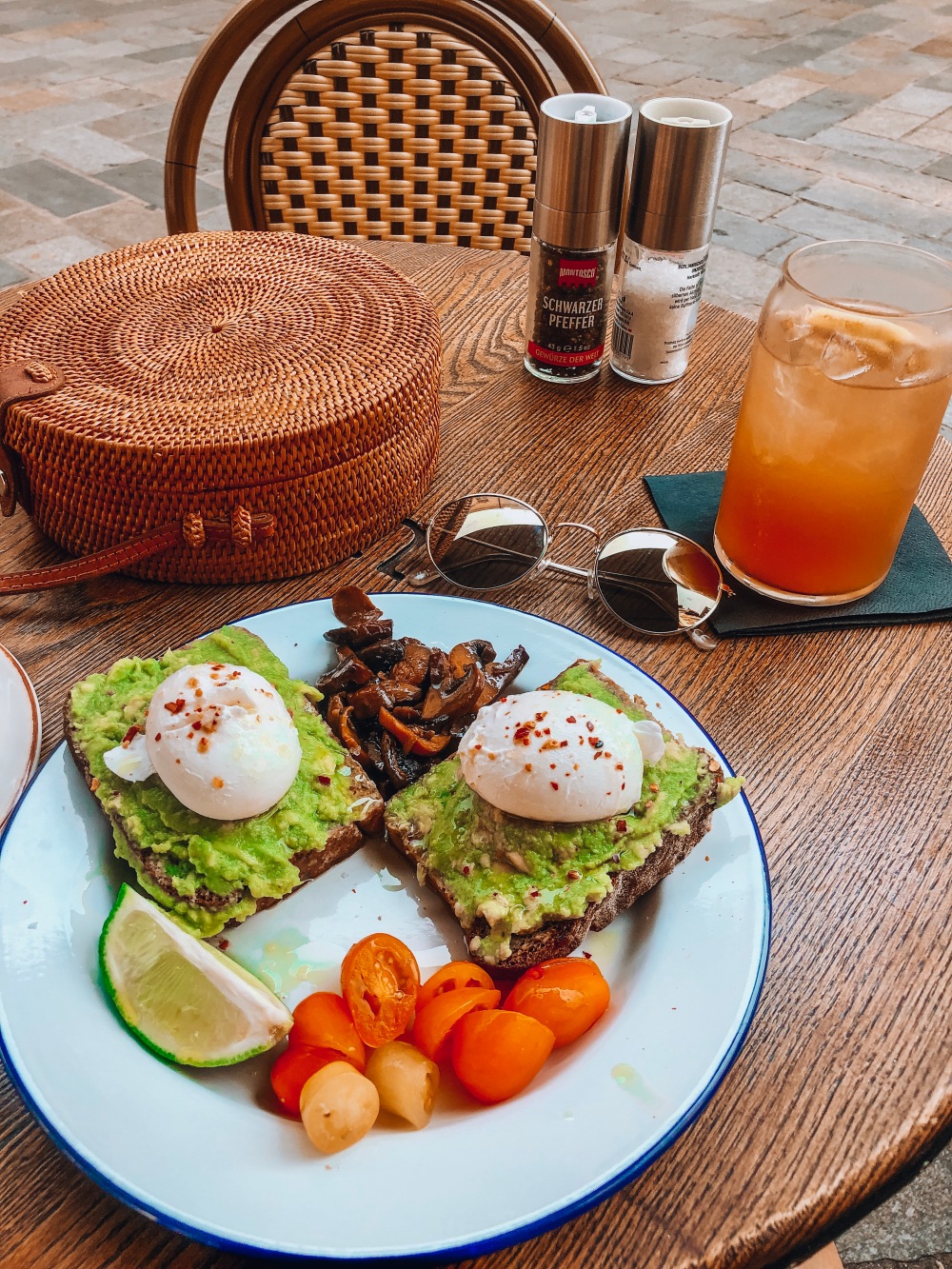 Food was lovely and the service very quick and I paid the bill and set off on my way for some sightseeing. First things first was to see Michael’s Gate! Michael’s Gate is the only city gate that has been preserved of the medieval fortifications and ranks among the oldest town buildings. Built about the year 1300, its present shape is the result of baroque reconstructions in 1758, when the statue of St. Michael and the Dragon was placed on its top. The tower houses the Exhibition of Weapons of Bratislava City Museum.

My friend Anna said that when her mum was younger whenever they walked underneath the gate they would hold their breath for good luck, so I did the same! Hoping that some good fortune comes my way at some point.

I wandered through the quaint streets of the Old Town admiring the architecture and the beautiful pastel colours of the buildings. The uneven cobbled streets added a rustic charm, and you never knew what was just around the corner. Tourists were milling about everywhere and I was more than happy just strolling around in the sunshine.

I could see Bratislava Castle just peering over the top of the city, so I set off in that direction following the signs that were up throughout the Old Town. 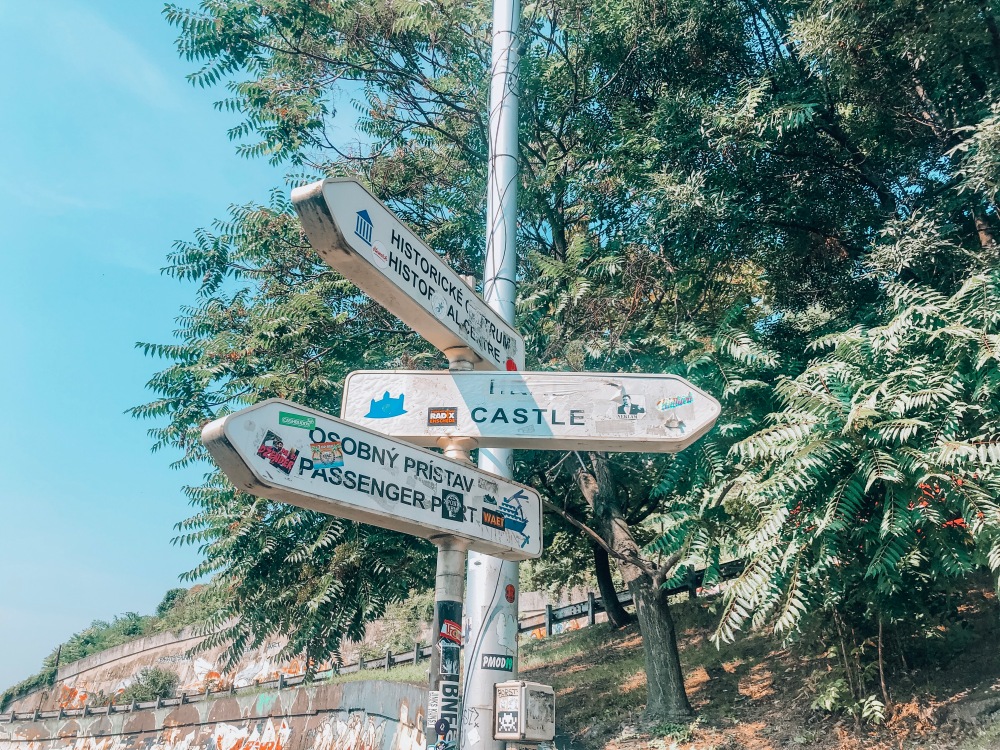 I began the walk up to the castle which is on quite a steep incline may I add! On my way I walked past so many cute bars and restaurants, and check out these prices too. Only €1 for a glass of prosecco? I’ll be heading back to Bratislava for sure! 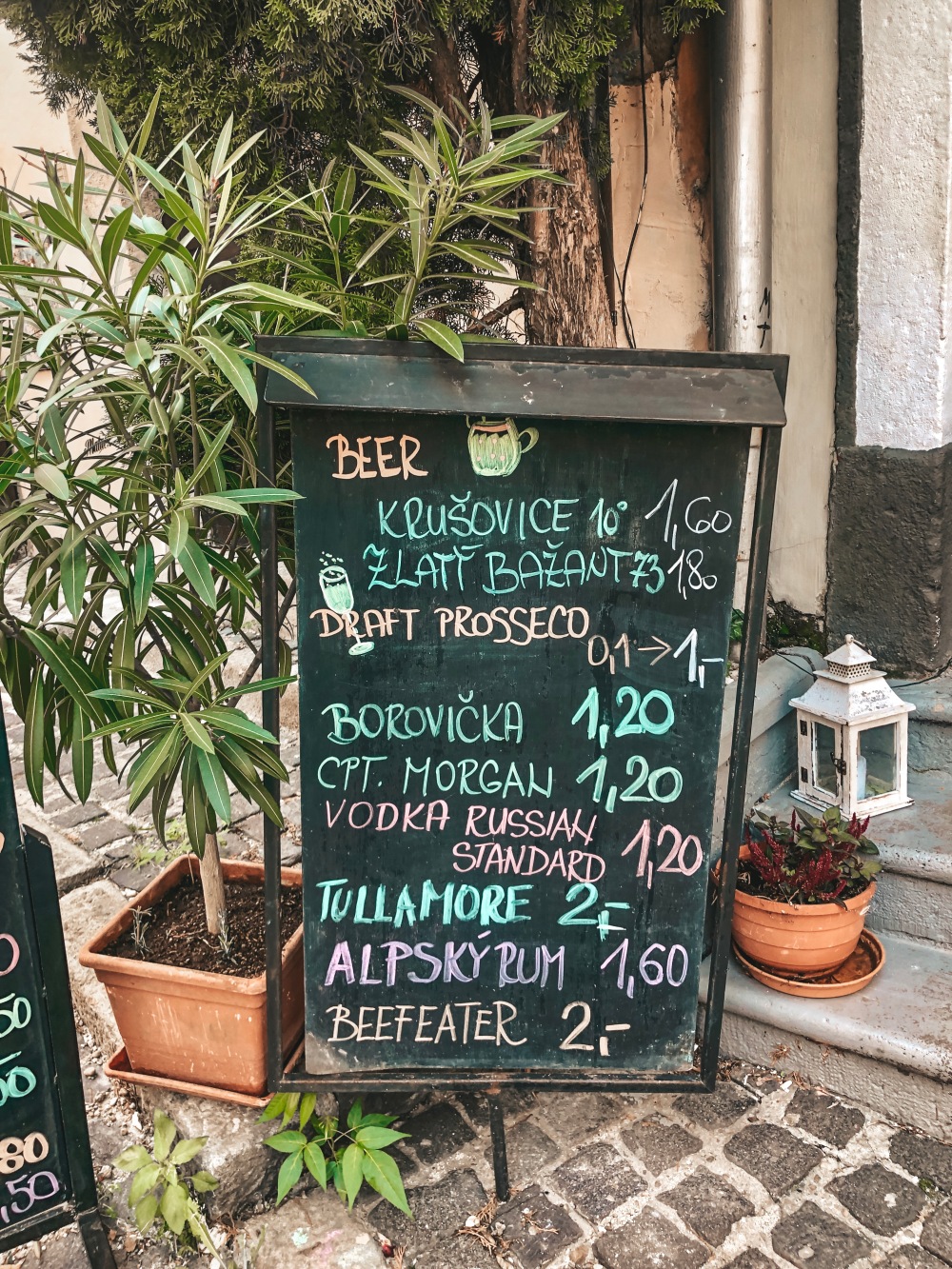 Sadly I couldn’t stop for a drink with me flying later that evening, so I powered on to the top to come out to a beautiful view across the city showing off the Most Slovenského národného povstania, or more commonly referred to as the UFO tower due to its resemblance to a UFO space ship.

I wanted to go up to the top to view the city from the observation deck, however it was a little out of the way and I just couldn’t find the time to squeeze this into my day as well as everything else.

I finally made it to the top of the castle which stood there gleaming in the afternoon sun. It was very impressive with beautiful surrounding gardens. 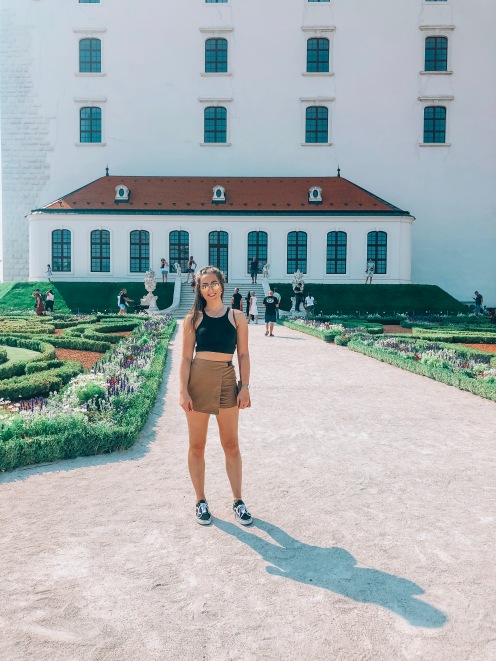 With the midday sun beating down, it was getting very very warm and I wanted to cool down when I came across some deck chairs just below the castle in the shade. I grabbed one and sat admiring the view and people watching. 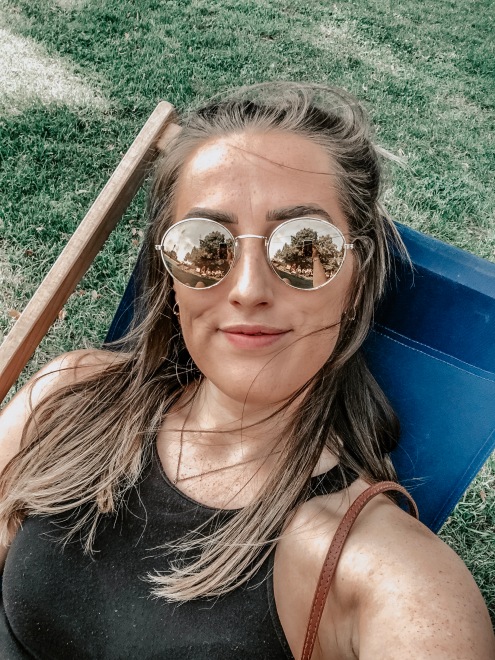 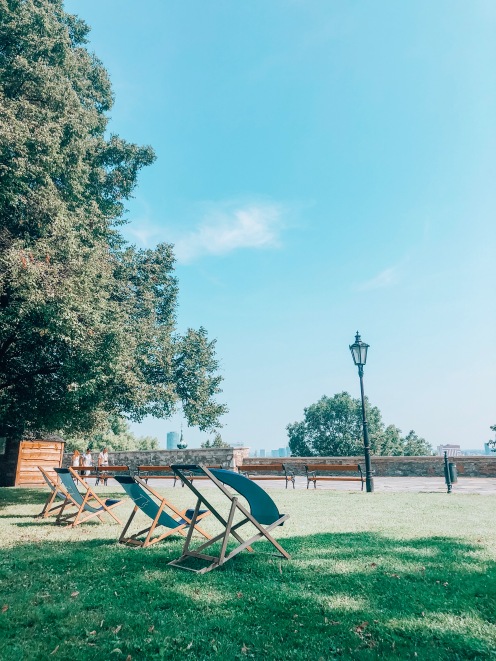 After about half an hour I walked back down to the Old Town towards Čumil, not before stopping for an ice cream to cool down again. I went for a coconut sorbet which was so refreshing! 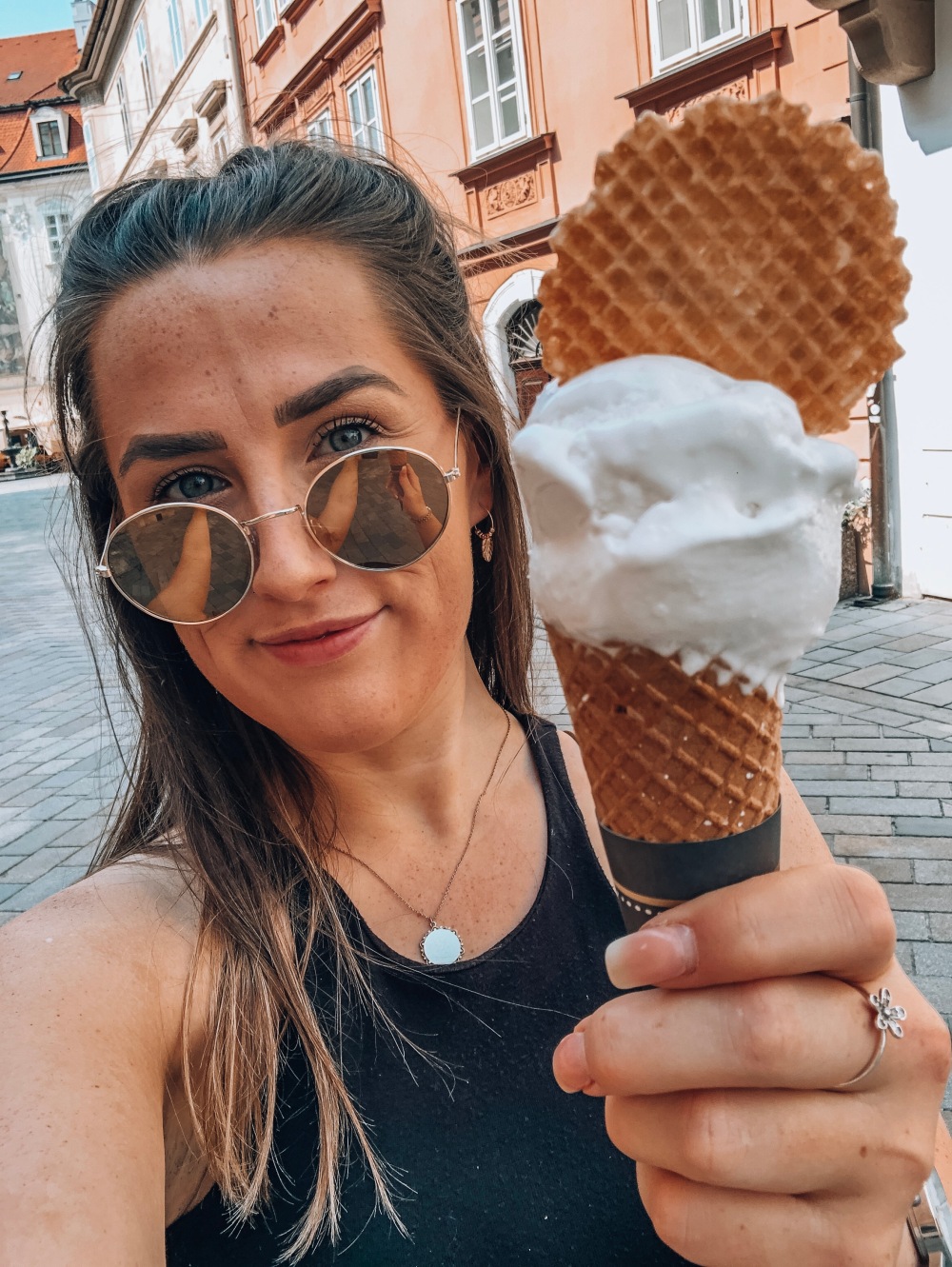 Čumil, often referred to as the man at work, is one of the most famous statues in Bratislava and one of the biggest attractions in the city centre. Čumil is a bronze statue by sculptor, academic painter, graphic artist and artist Viktor Hulík  .It was mounted on July 26, 1997 at an event called Korzo Party , to celebrate the reconstructed and renewed pedestrian zone. Thirty thousand people together with the President of Slovakia Michal Kováč attended the party. The odd statue was installed in 1997 as part of an effort to spice up the look and feel of the area which was traditionally marked with drab Communist-era architecture and decoration. People also stroke his head for good luck too!

My next and final stop of the day was to the Church of St. Elizabeth or often referred to as the blue church due to the church being entirely blue. Look how beautiful and different this looks!

Like something from a fairy tale. Bratislava’s most appealing art nouveau building, a model of which is present in Brussels as well, representing Slovakia. When you look at it on a sunny day, it has the same colour as the sky – and has its name for this obvious reason. The facade is blue. The mosaics are blue. The majolicas are blue. Everything, including the pale blue-glazed roof through the gate is blue. And not only exterior – its interior is also painted in shades of pale blue. 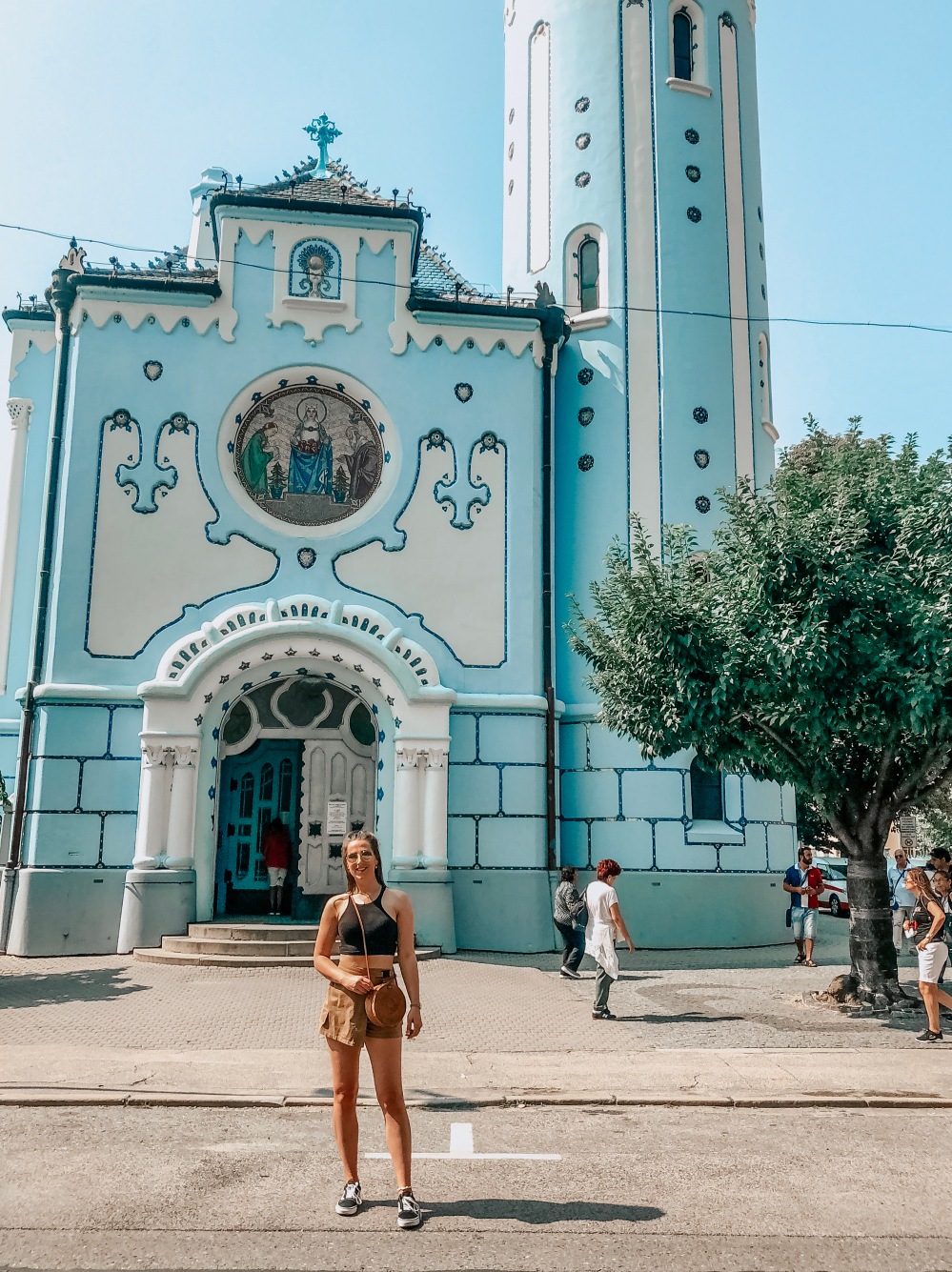 After this, I quickly called in a few shops before it was time to make my way back to the bus station to go back to Vienna and sleep for a couple hours before the night flight back to Dubai. I was exhausted after a day of exploring and rightly so! I’d done 20,054 steps, that’s 9.1miles!!

I really enjoyed my visit to Bratislava, I really recommend a day visit there if you’re ever in Vienna! Especially to crew on the layover, it’s super easy to get there! The coach over had wifi and plugs, and Bratislava had a lot to offer and is super cheap! What a great way to tick off country number 70!