I swapped my Milan layover and a day off for a turn around to Karachi and a layover in London Gatwick as I had tickets to see Ariana Grande at the London O2 Arena. A very lucky swap for the other person, but it was working out in my favour too! A very early departure out of Dubai at 2:50am landing into London in the early hours. As soon as we checked in to the hotel, I went to bed to sleep for a few hours knowing that I would be having a late night with an early wake up call.

As my alarm went off, I got up and got ready to meet my friends Kitty and Rozz at the Royal Victoria Docks where they were staying so we could have a few pre show drinks before heading over to the O2. They were staying at the Good Hotel which is actually a floating boat hotel and is SUPER cute! I really recommend this hotel for anyone coming to London for an event at the O2, for its close location and cute interiors. 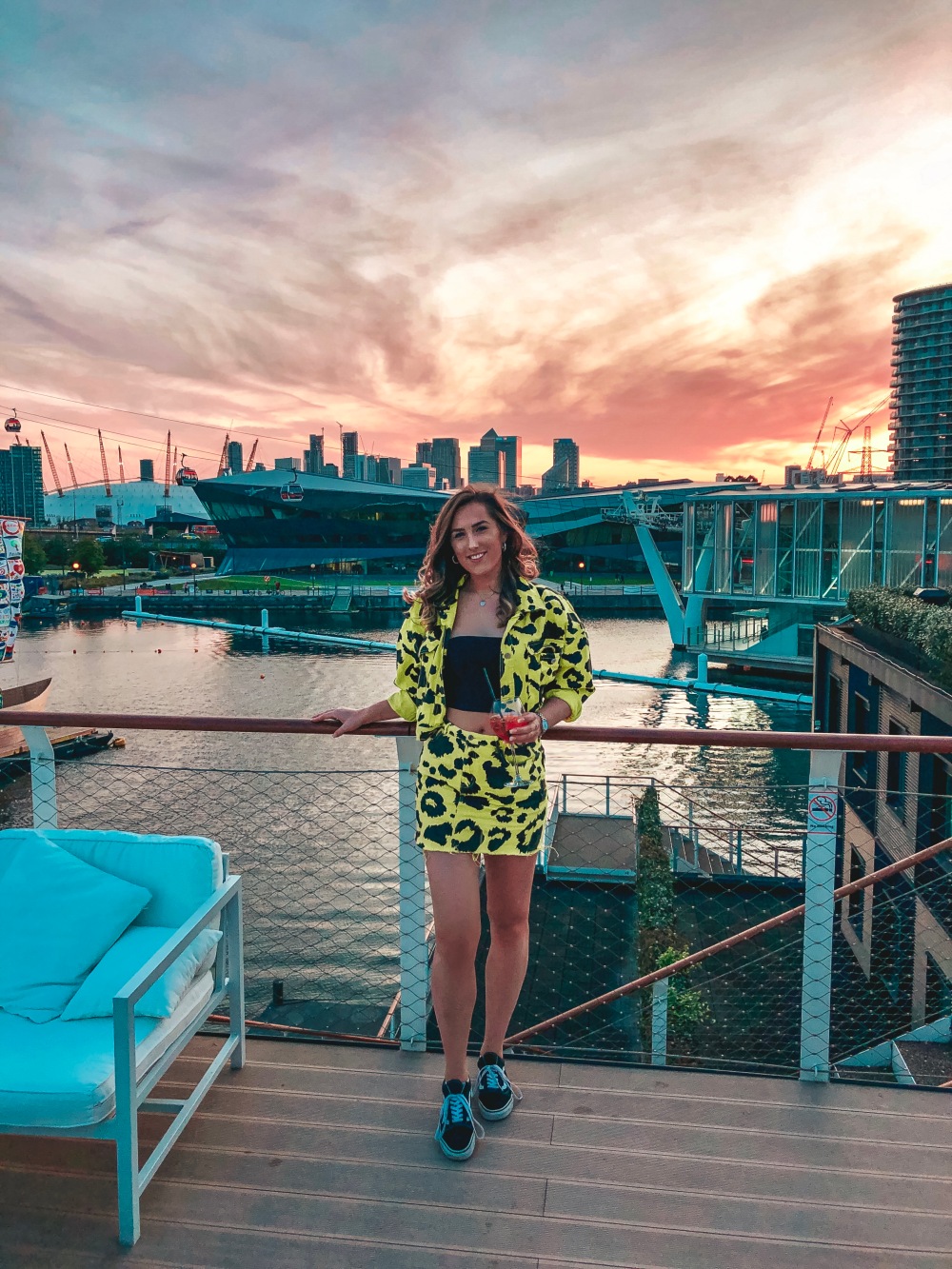 When the girls were ready, we headed up to the roof for a rooftop beverage. I grabbed an Aperol Spritz and we sat watching the sun go down behind the O2 with the view of the Emirates AirLine cable cars floating past, and with the close proximity to London City Airport we had the planes flying right overhead. It was incredibly picturesque and such a lovely setting. 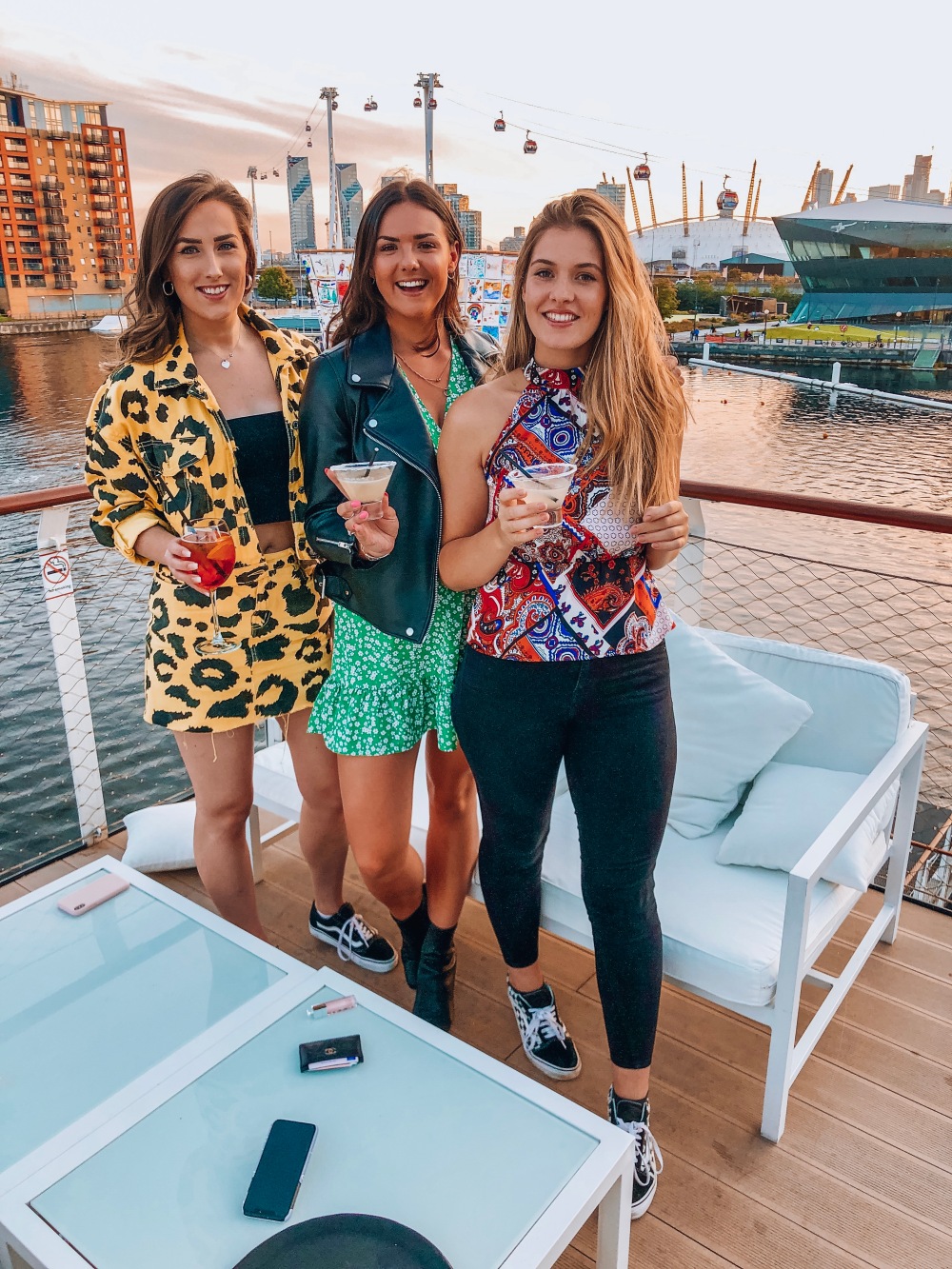 After an hour on the roof, we walked over to the Emirates AirLine to take the cable car to the venue and is comprised of a 1 kilometre gondola line that crosses the Thames from the Greenwich Peninsula to the Royal Victoria Dock, to the west of ExCeL London. 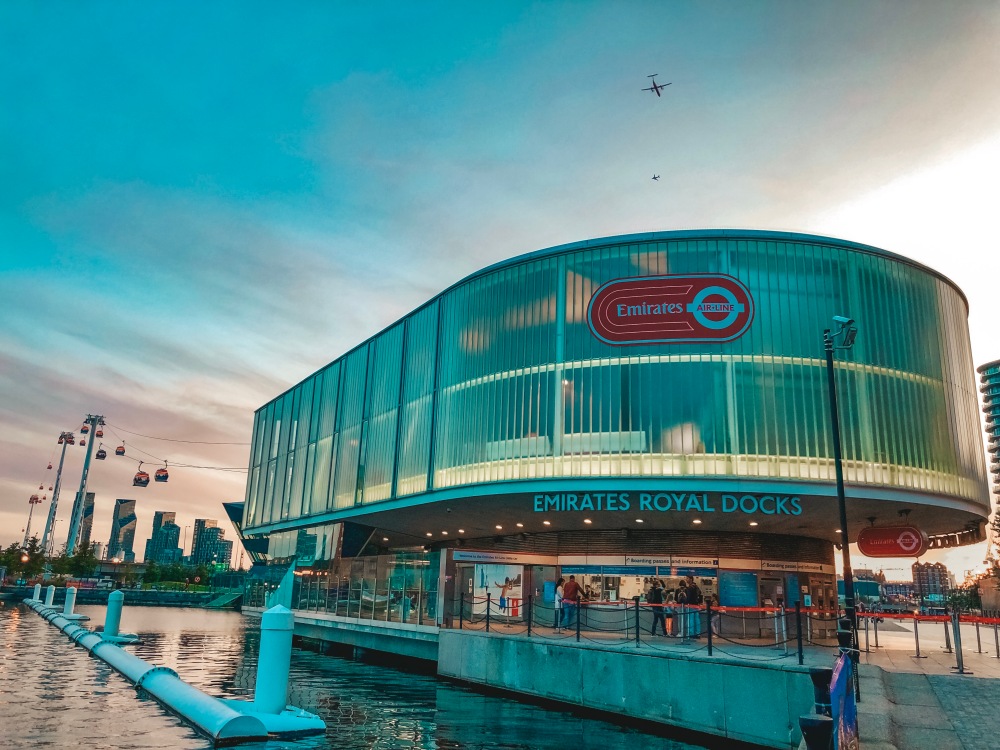 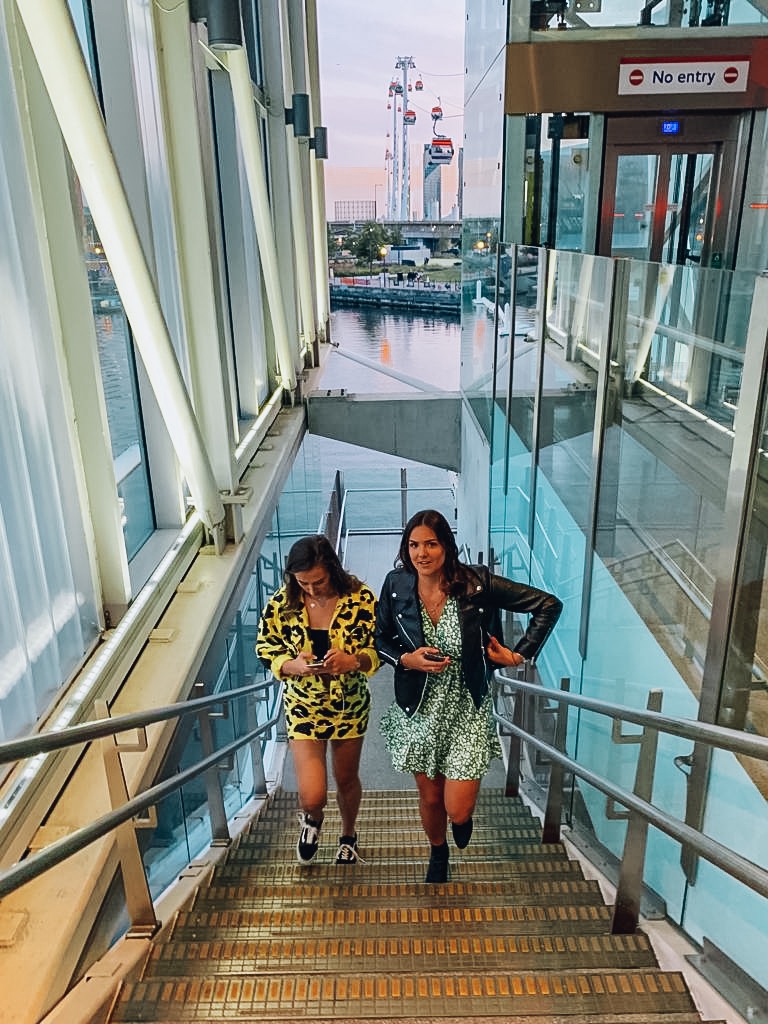 It boasts great views of East London and is a wonderful way to see the city. I’d never seen this view of London before and it looked gorgeous with the hues of yellow, orange and red as the sun set. 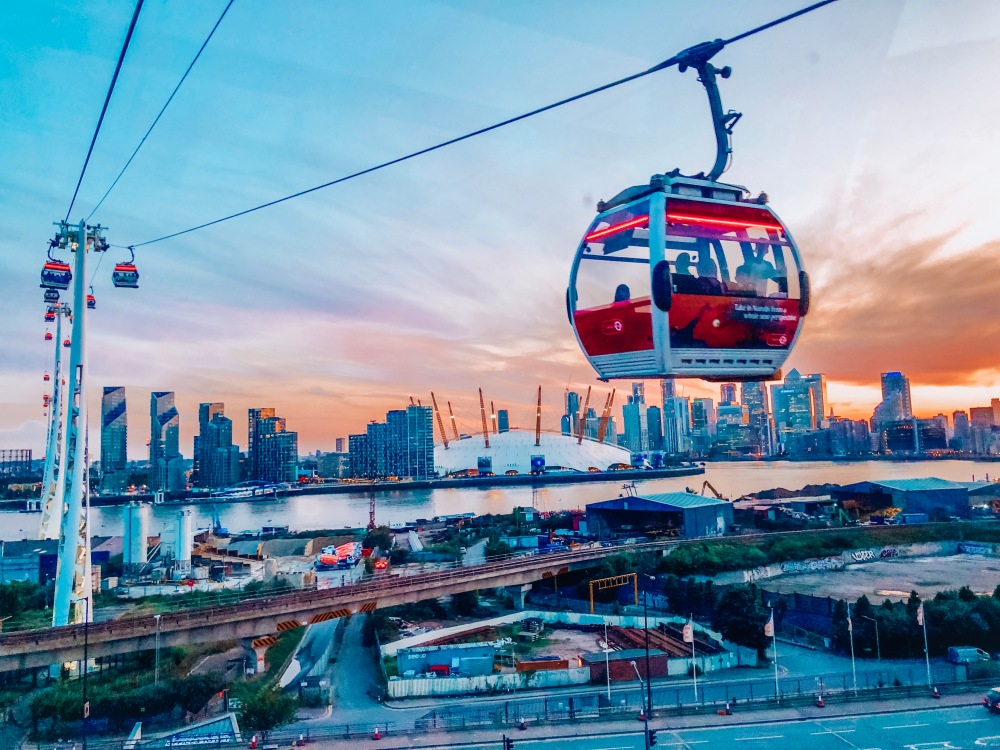 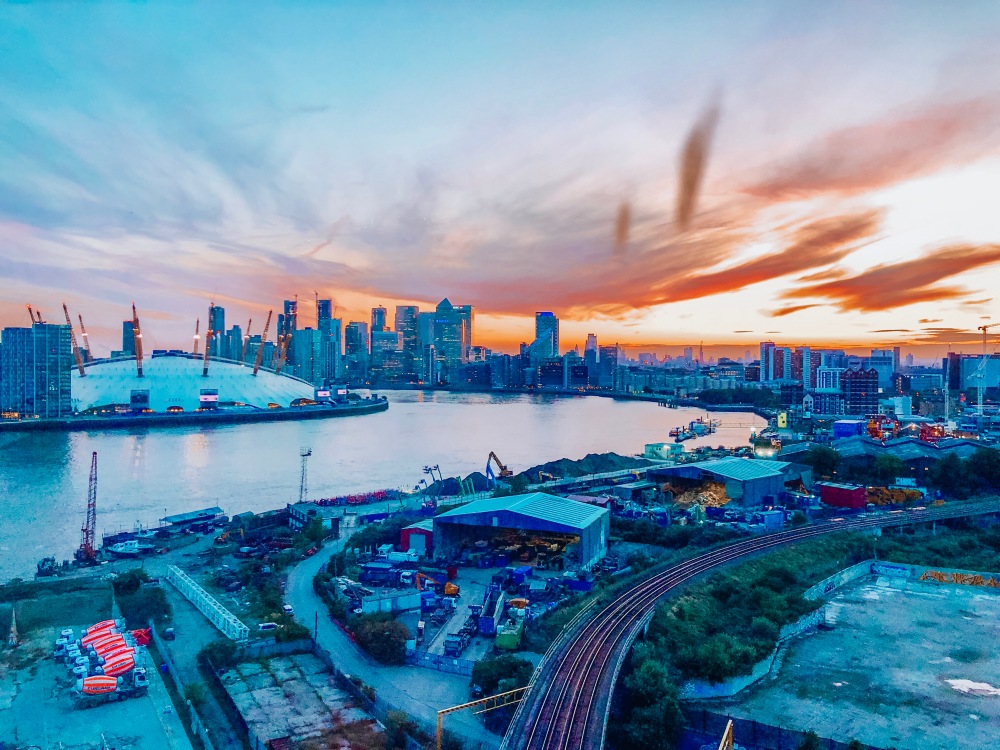 It takes ten minutes one way and cost £4.20 for the ticket! It meant us missing all the queues on the tube and dropped us right around the corner from the O2. Couldn’t have been better! 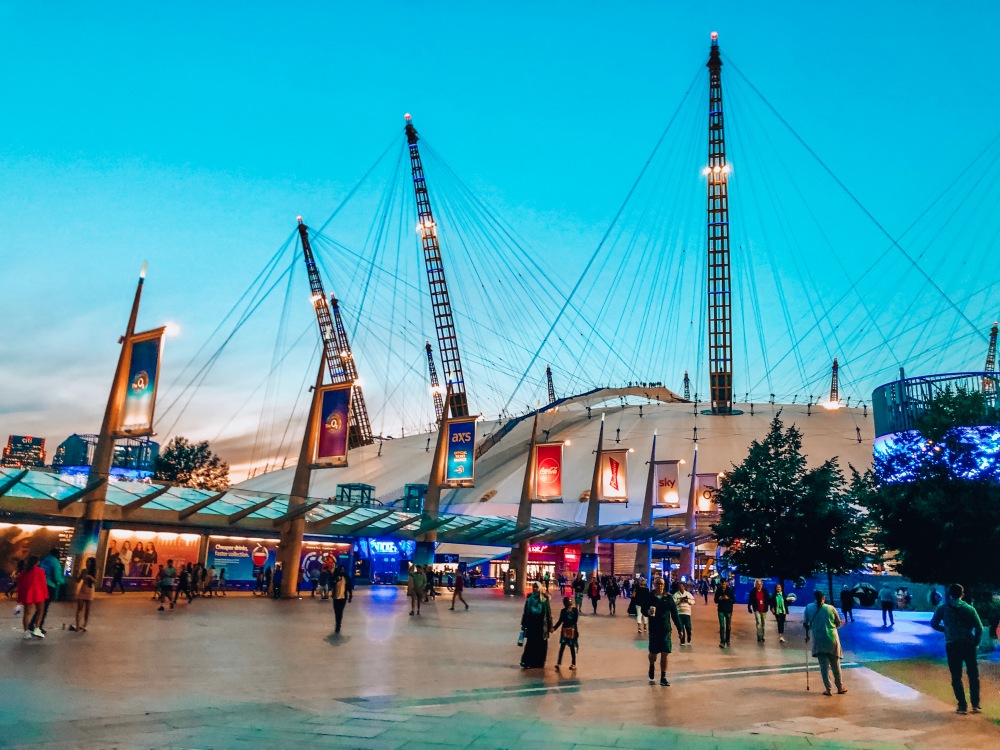 When we got into the venue we stopped for a bar snack in All Bar One, only to find they wouldn’t be able to get it to us in time before Ariana coming on, so we went through security and grabbed a space at the back (as we had standing tickets) moments before her angelic voice came through the speakers.

I don’t have many pictures of the evening, I was way too busy dancing and having fun and listening to her unbelievable vocals. I knew she could sing, but wow. She completely blew me away. Such an insanely talented artist and performer. I’ve wanted to see her for the longest time, I’ve been a huge fan ever since she started on Broadway and she really did not disappoint, AT ALL. As we were quite far at the back, and none of us were really bothered for battling it through the crowds to get further forward my pictures aren’t that great. You’ll have to zoom in to identify petite little Ari on the ginormous stage. 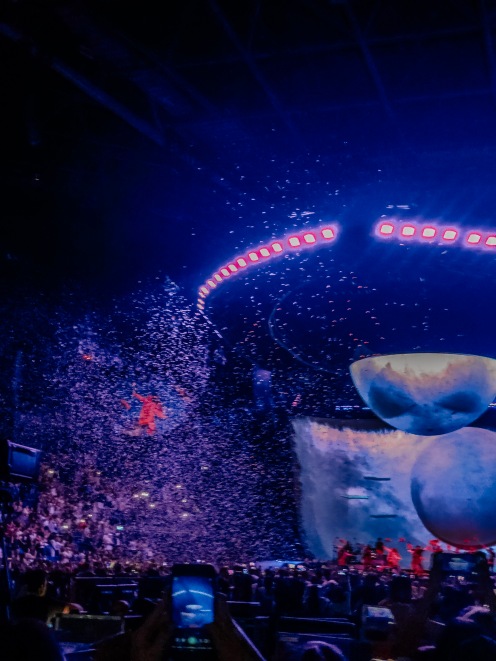 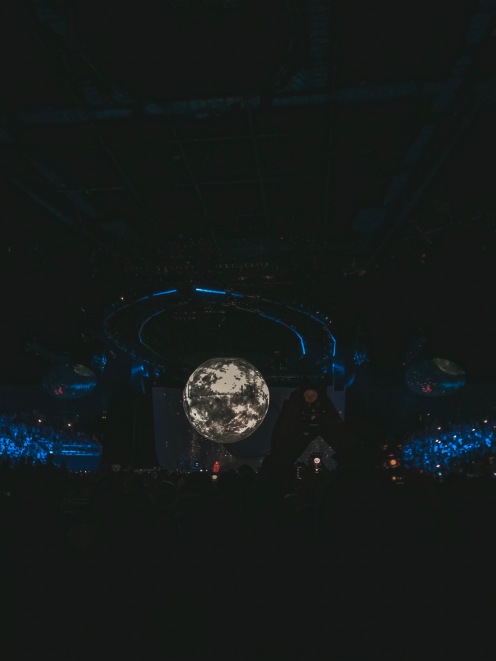 As soon as she finished her last song, I ran as fast as I could out the arena so that I could jump on a tube as quickly as possible to make my way back over to Gatwick. We had a 6:45am wake up call, and I wanted a decent sleep before the day flight back to Dubai and I managed to make it back in just over two hours with a little pit stop in M&S for a food haul. I’d barely eaten all day, so I was really hungry! 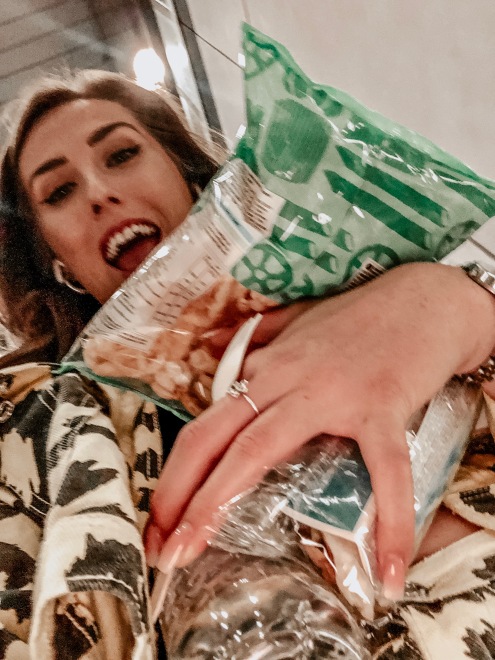 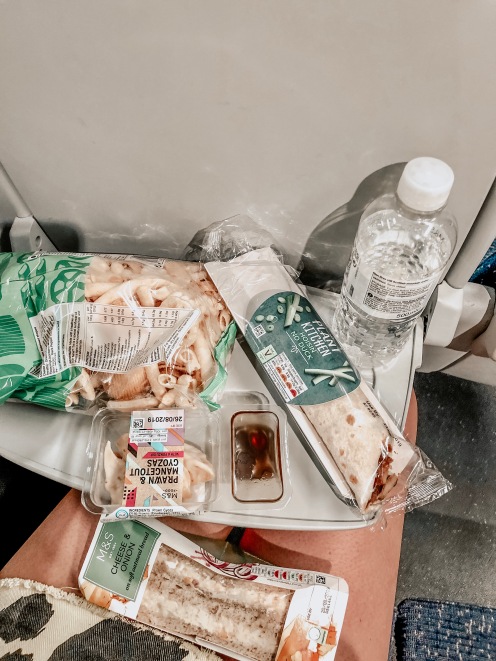 A great layover, not much to share but I definitely want to recommend using the Emirates AirLine cable car when in London. Such a great way to see the city and something I’d never thought of using before!