The newest destination on the Emirates network and one that I was really looking forward to! We departed Dubai at 9:15am and it was seven hours and fifteen minutes over to Francisco Sá Carneiro Airport in Porto, Portugal. A full flight that kept us busy all the way over but it didn’t feel like long before we were landing at 2pm. After making our way through immigration, we got on the bus to the hotel and five of us arranged to meet downstairs forty minutes later.

One of the crew, Fatima, was from Porto and she had so kindly written us a list of must sees, things to do, where to eat, where to drink etc! So after looking at all the suggestions, we jumped in an Uber in the direction of Ribeira. 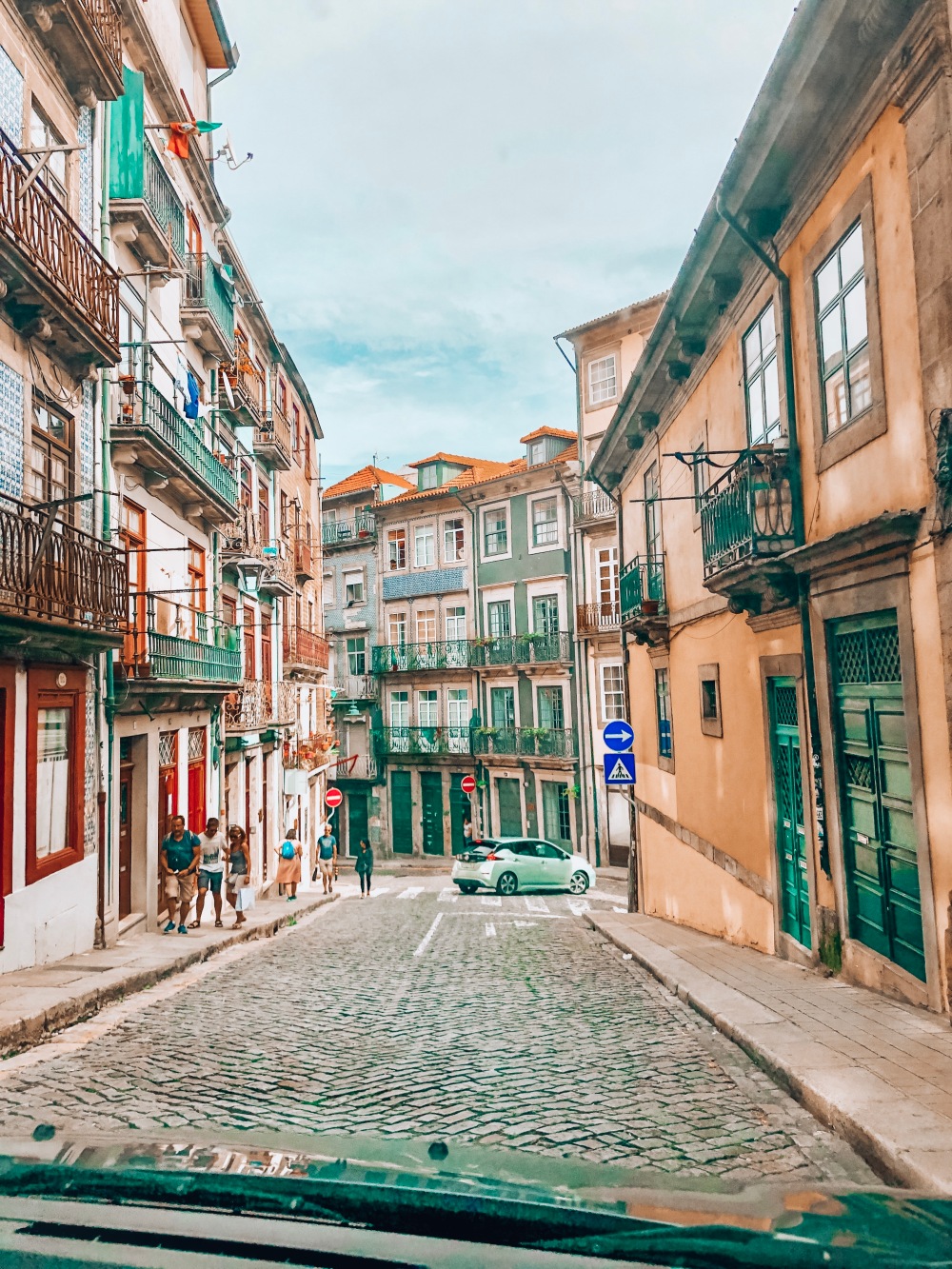 The weather was perfect, not too hot, not too cold and the sun was shining down. We hopped out the Uber and walked along the busy riverside. With it being a Saturday afternoon on a warm day in August it was absolutely packed out with tourists. We weaved in and out of market stalls selling an abundance of souvenirs and admired the gorgeous multitude of coloured houses with the famously red tiled roofs that Portugal is known for. 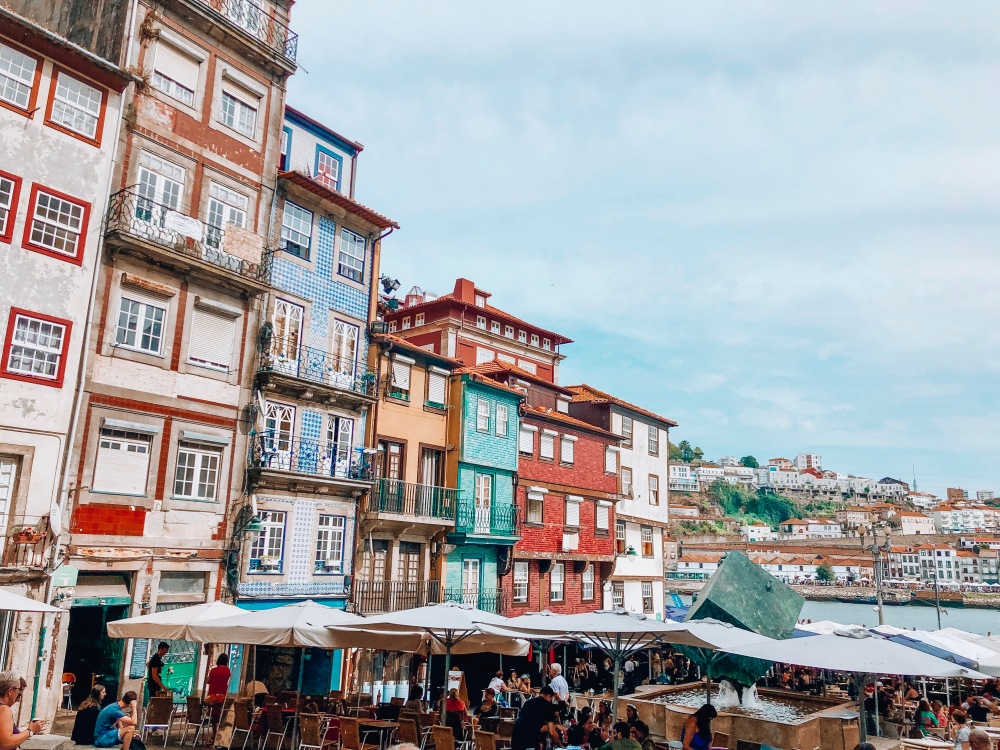 We walked towards the Luís I Bridge for a gorgeous view of the river back over Porto before walking back up the many steps into Porto town. 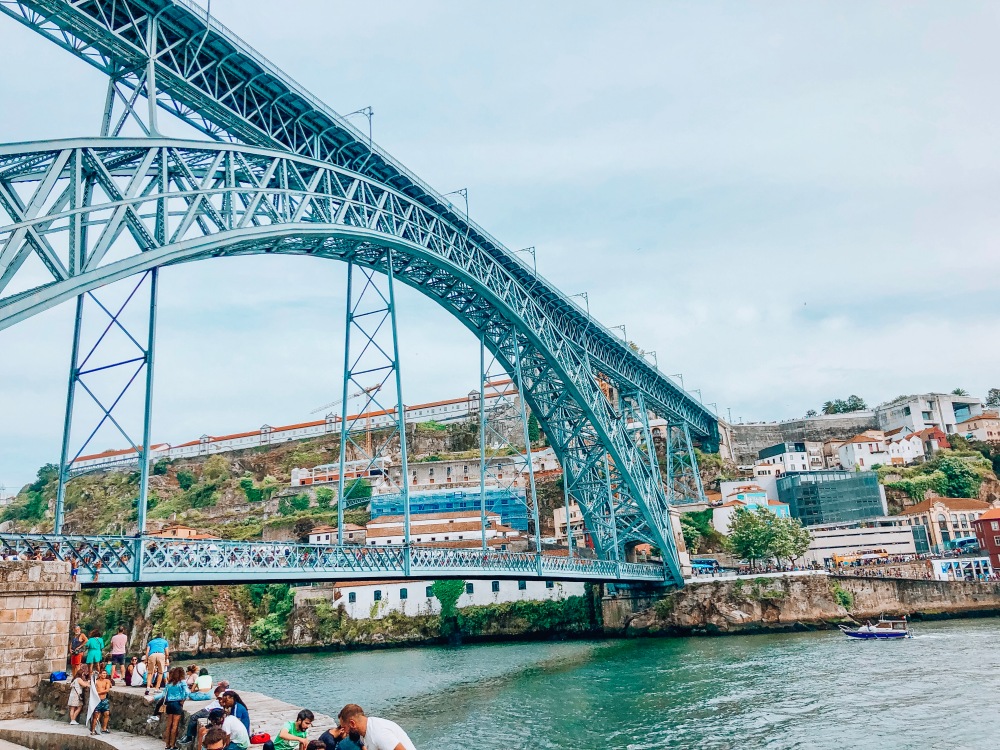 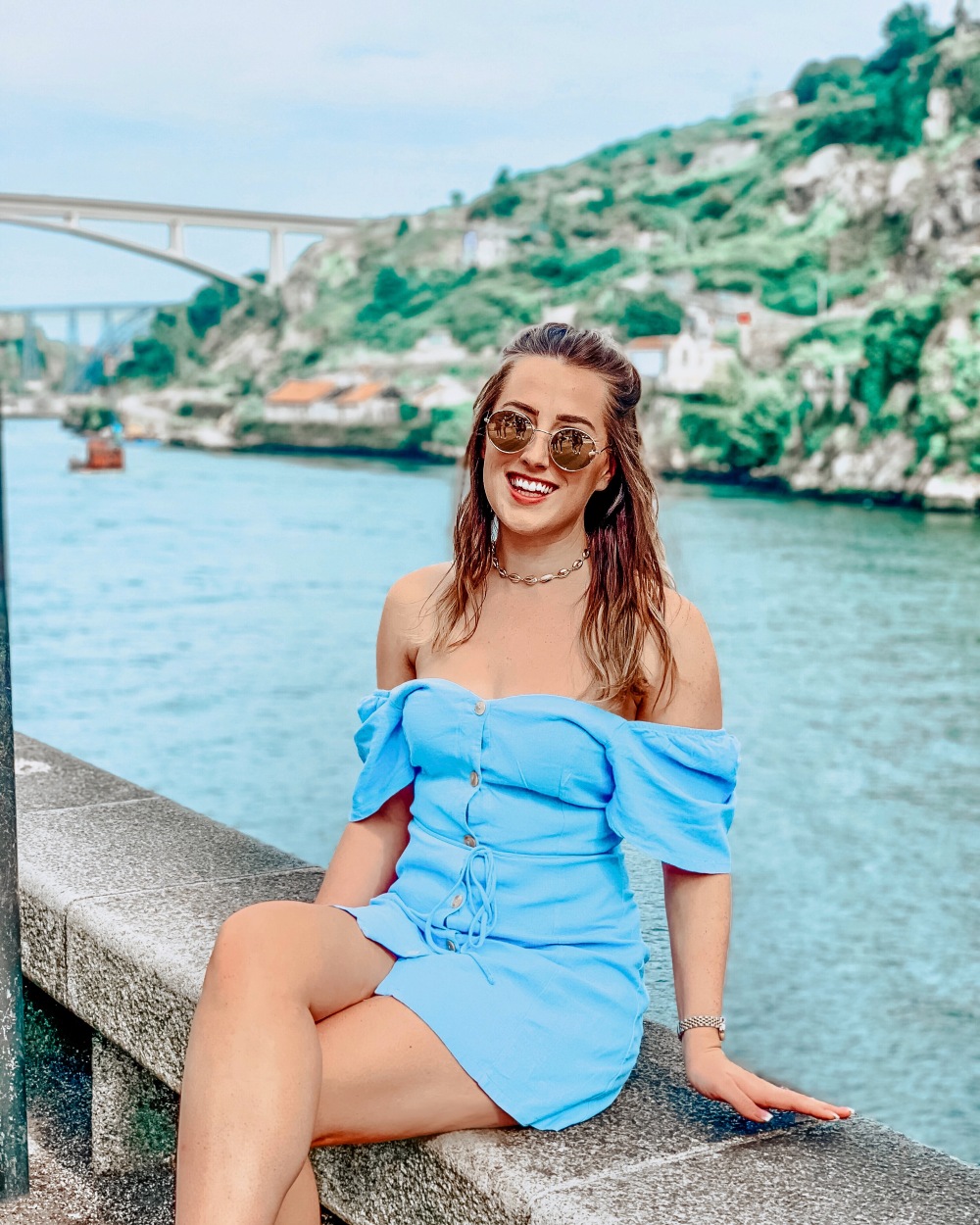 We headed back up into the town we wandered through winding streets admiring the gorgeous architecture on the hunt for pastel de nata. On my last trip to Portugal for some reason I didn’t try the Portuguese egg tarts that Portugal are famous for and I’ve never regretted something so much in my life. As we walked in the direction of Clérigos Tower we came across a cafe with tables outside in the sunshine. With all of us feeling tired from the flight and wanting a little coffee pick me up, we grabbed a table and I ordered a cappuccino and my first ever pastel de nata, and it blew me away. WHY HAVE I LASTED TWENTY FIVE YEARS OF MY LIFE WITHOUT TRYING THIS!?

The Pastéis de nata were created before the 18th century by Catholic monks at the Hieronymites Monastery in the civil parish of Saint Mary of Bethlehem, in Lisbon. At the time, convents and monasteries used large quantities of egg-whites for starching clothes, such as friars and nuns’ religious habits. It was quite common for monasteries and convents to use the leftover egg yolks to make cakes and pastries, resulting in the proliferation of sweet pastry recipes throughout the country.

Following the extinction of the religious orders and in the face of the impending closure of many of the convents and monasteries in the aftermath of the Liberal Revolution of 1820, the monks started selling pastéis de nata at a nearby sugar refinery to bring in some revenue. In 1834, the monastery was closed and the recipe was sold to the sugar refinery, whose owners in 1837 opened the Fábrica de Pastéis de Belém. The descendants own the business to this day. In 2009 The Guardian listed pastéis de Belém as one of the 50 “best things to eat” in the world. 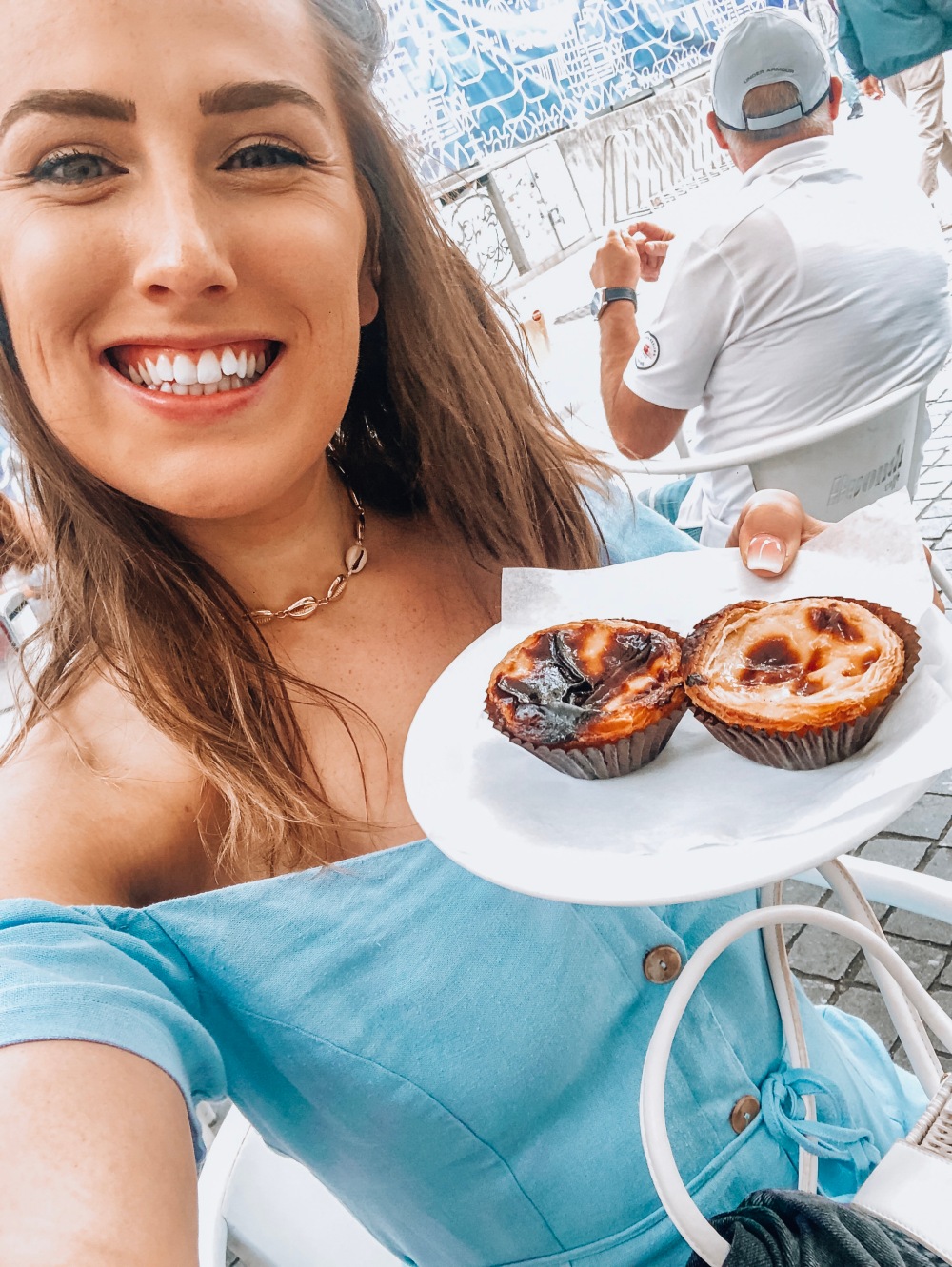 Feeling refuelled we continued on and reached Clerigos Tower. There was quite a long queue to go up, so we passed up on it and walked back towards the river and across the bridge in search of a rooftop bar with a view.

Choosing one of the places Fatima had suggested to us, we strolled up along the hills of the city and meandered in and out of winding staircases and narrow alleyways before arriving at Porto Cruz. It was really quite busy and I can see why with a fabulous drinks menu and a great view, but we managed to grab a table as a small group left and myself and Malgorzata shared a jug of white wine sangria as we sat chatting away admiring the view.

After an hour or so stomachs were beginning to rumble and we found a restaurant by the water to watch the sunset. And what an unbelievable sunset it was. The last time I saw a sunset this colourful was in Cambodia, but this just continued to get better and better and better with every few minutes. Check out these photos below with their times in the captions. Every time I sat back down, I had to get right back up to admire the new colours!

Ordering some more sangria, I opted for the polvo a lagareiro which was freshly grilled octopus served with crushed potatoes, crispy spinach and a large amount of garlic and rosemary. It was absolutely heavenly, and will definitely want to be ordering this again at some point.

As the night drew to a close, we ordered an Uber and went back to the hotel feeling full and content of our afternoon spent exploring Porto.

I set my alarm for 10am the next morning so that I could venture out for some breakfast. After googling online, the best places seemed to be back in the centre and I set off in the direction of a place called Cafe Zenrith. However, when I got there it seemed every other person in Porto had also had the same idea as every table inside and out was taken and there was a queue of around thirty people snaking down the street! I can see why as the food looked so delicious and many people were sat sipping mimosas and filling up on pancakes ladened with cream and berries on this gorgeous Sunday morning. Having seen a couple others online too, I could see that Noshi was just a few minutes round the corner and as I approached I grabbed the last table outside ordering a matcha latte and an avocado on toast with poached eggs, bacon, lettuce, tomato and cheese. Again the food was amazing, and I sat people watching admiring the beautifully blue tiled buildings around me with the traditional Portuguese trams going by.

As I finished my breakfast, I wandered back through the busy streets of Porto in search of coffee and freshly made pastel de nata. After my first amazing one yesterday, I couldn’t wait to have another. 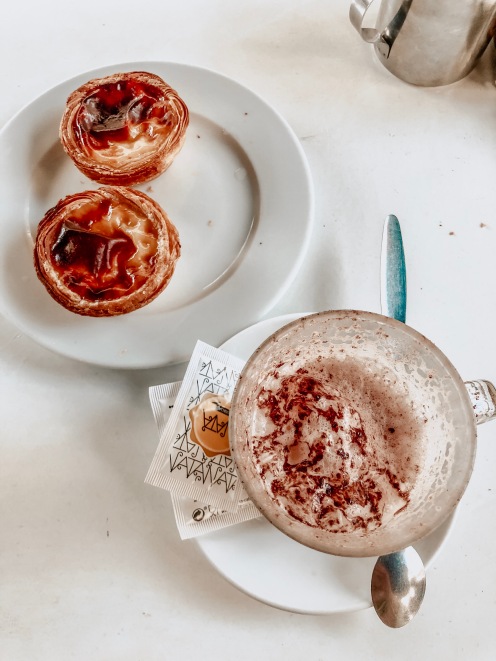 Enjoying them so much, I also bought a pack of six to take back to Dubai with me. I can’t go back to my flat mates without egg tarts!! Before having a little browse through a few shops to work off all those pastel de nata eaten and soak up the morning sun! 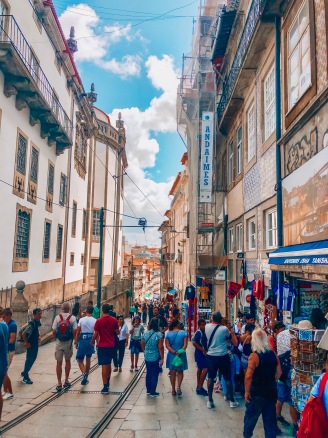 I made it back to the hotel with twenty minutes to spare before the wake up call, and then got ready to head back to Dubai.

Porto is such a beautiful city, and I can see why so many people rave about it. The beautifully coloured houses, the traditional red tiled roofs, the pastel de nata, the gorgeous views, the stunning sunsets and the delicious food, it’s a great place for a relaxing city break.