Back to Africa again for me but this time to the destination of Harare in Zimbabwe. It was around three years when I was last there and took a trip out to Lake Chivero, and I was looking forward to heading back and exploring more.  It was a morning departure from Dubai and a long day at work with seven hours to Lusaka in Zambia before finishing the day with a short forty five minute flight across to Harare. Landing at 17:15 into Robert Gabriel Mugabe Airport, we collected our bags and made our way over to the hotel taking in the breath taking African sunset.

A few people, or so I thought, were heading down to dinner. So I met the crew an hour later after checking in, but most people were just coming down for drinks so I ordered a beer and some coconut crumbed fish and called it a night afterwards knowing I had an early start the next day.

The next morning I was up bright and early as we had booked to go on a safari via horseback. The cost of the trip was $25 and was a morning excursion with us having an afternoon wake up call. We were picked up at 8:50am and we drove out to Mukuvisi Woodlands.

When we arrived we were taken across to the paddock and the four of us given a little brief and a helmet before we were each assigned a horse.

I was given a black and white female horse called Semi and we saddled up and exited the paddock and into the African savannah.

There are many animals that can be found in Zimbabwe and it wasn’t long before we stumbled across some zebras and some giant eland.

We continued further on through the savannah when we saw a giraffe grazing on the leaves from a tree! It was so lovely to see a giraffe in its natural environment, and we stopped for a quick picture before leaving the animal in peace. 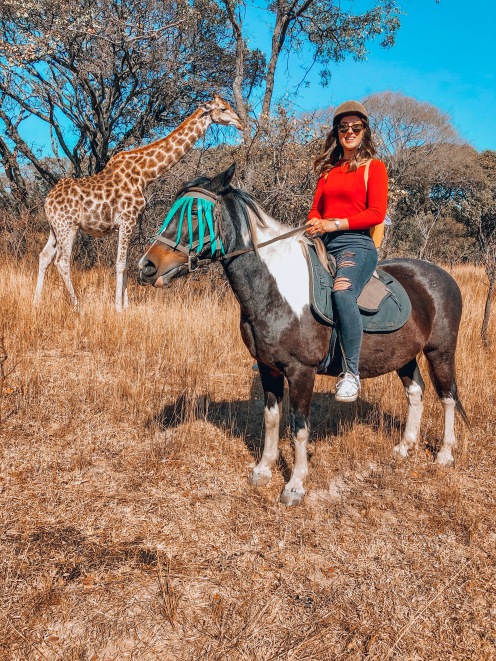 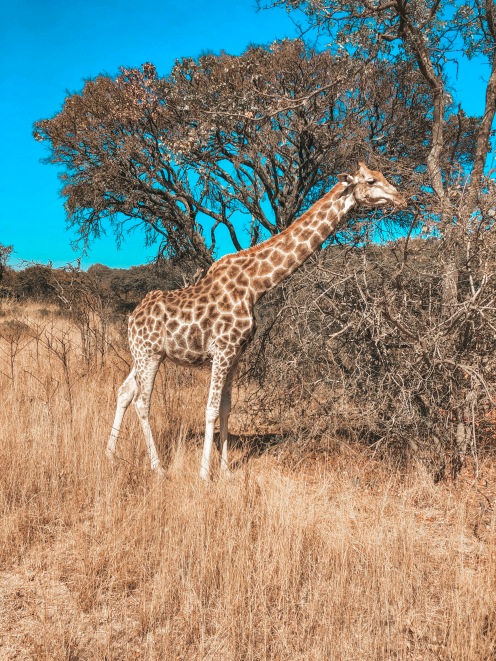 For any UK readers, I felt like I was in an episode of Wild At Heart (I used to love that programme) as we trekked along through the warming winter sun taking in the scenery around us. The gorgeous blue sky, the dusky oranges and beiges of the dried out grass and dust and the lovely bright colours of the animals that were going about their own lives.

As the trek drew to a close we made our way back into the paddock and dismounted from our horses, thanked our guides and decided to call at a local market before going back to the hotel.