Next part of our holiday and a place I have wanted to visit for the longest time was the Bahamas. It was a new country for me to visit, taking my total up to 69! We flew from JFK to Lynden Pingling International Airport in Nassau with Delta and it was a nice and easy three hour flight down the east coast of the USA. 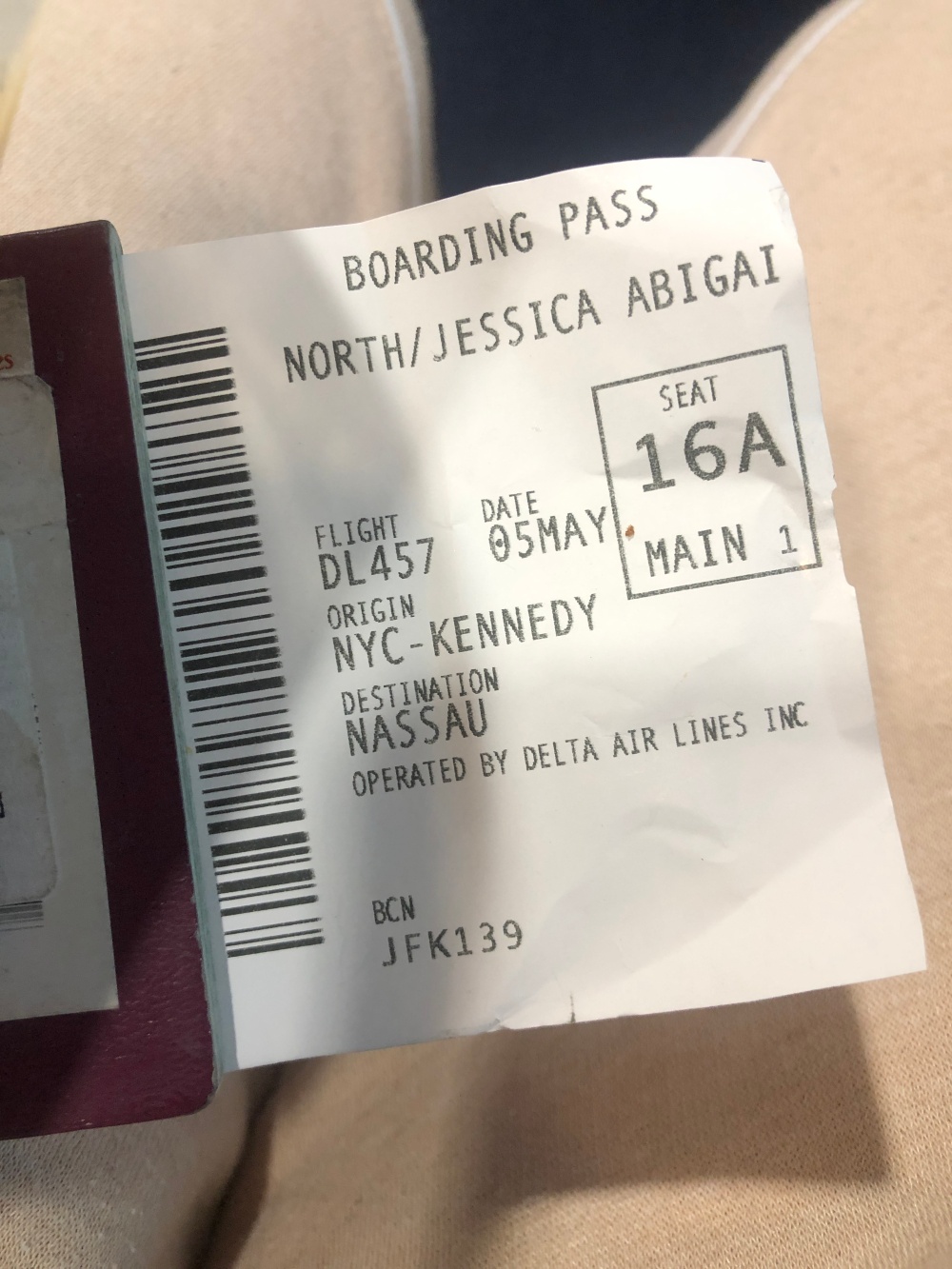 The flight over was beautiful, the scenery from the window seat was amazing. Insanely blue waters with sporadic tropical islands lined with bright white sand beaches, we really were flying into paradise. Landing just after lunchtime, we made our way through immigration and across to the hotel.

We checked in and went straight up to the room to change and go out onto the beach to tan. We only had a few hours of tan time left that day and we wanted to make the most before heading out to dinner later on.

The water was so clear and blue, and we were really close by to the cruise terminal which was so interesting to watch and see! I’d love to do a little cruise one day and couldn’t get over the sheer size of these ships!

That evening we went to dinner at a place called Señor Frogs (a restaurant we visited in Mexico last year and absolutely loved) for fajitas. They do some of the best fajitas we’ve all ever eaten and couldn’t wait to have them once more! 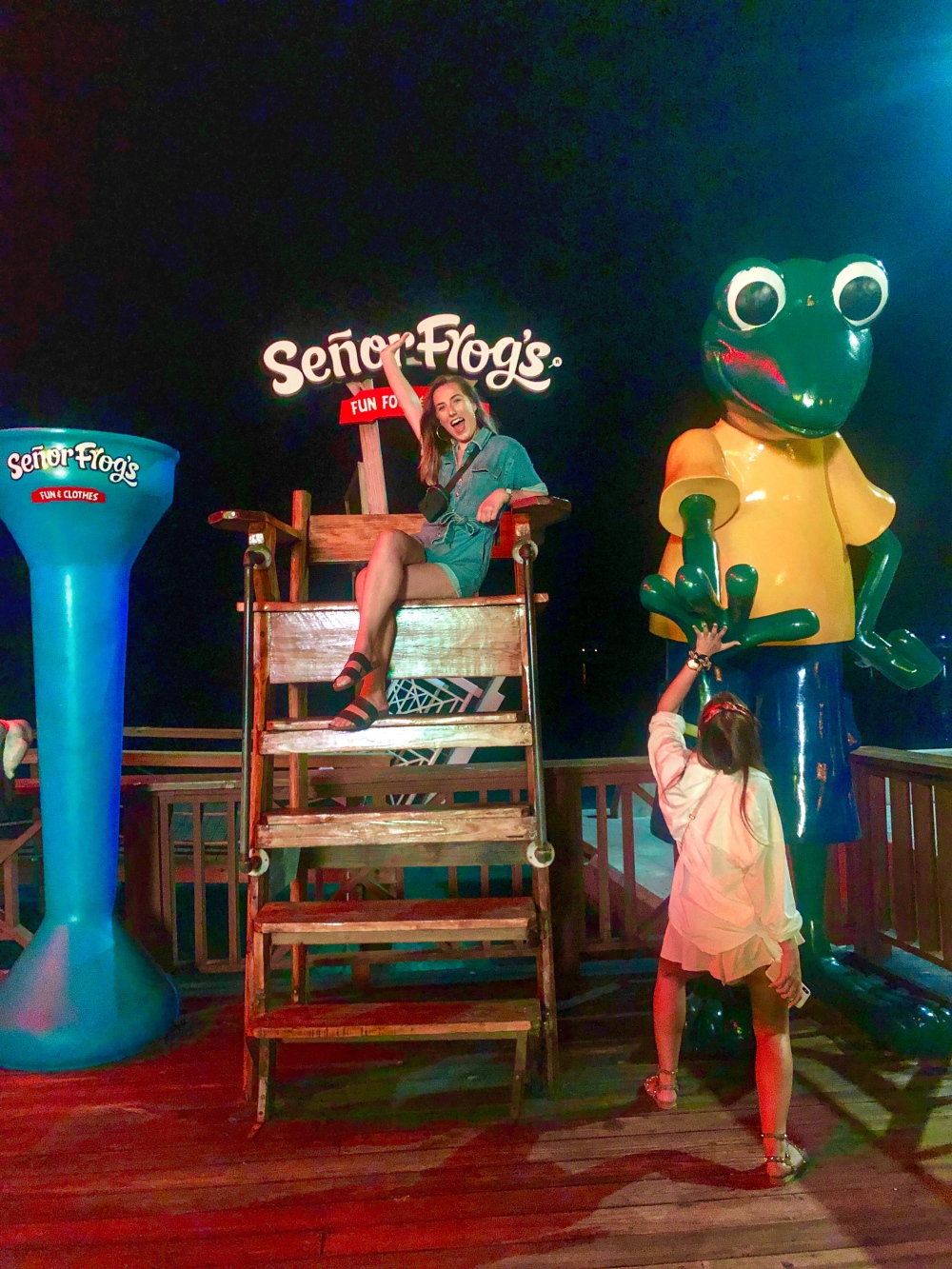 Unsure why I didn’t take a picture, but take my word for it the blackened chicken fajitas are amazing. I don’t know what it is they do that makes their fajitas so yummy, but they are seriously THE BEST. 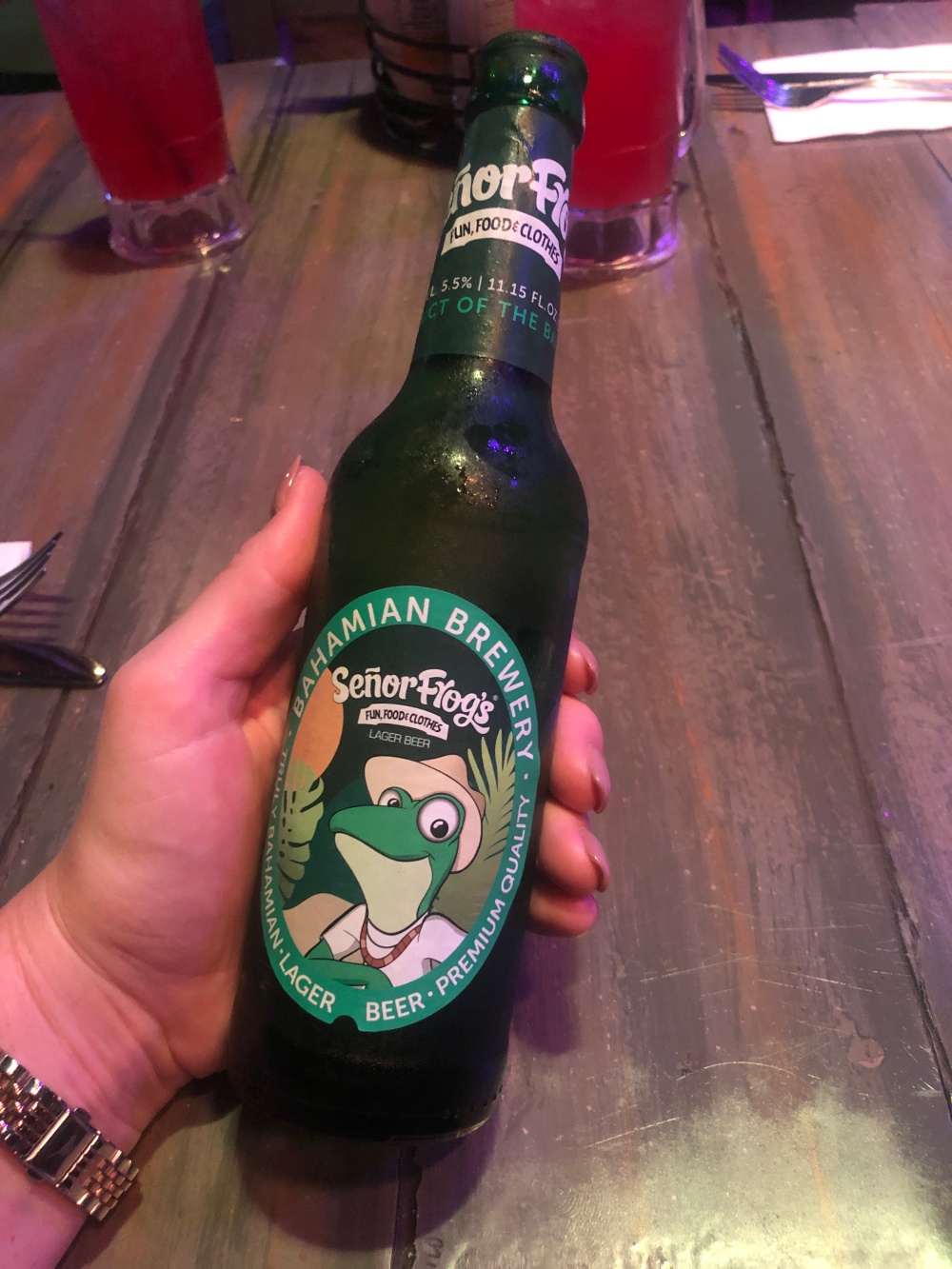 The next day we woke up early and we were all SUPER EXCITED for our excursion we had booked. The whole point of our trip was to go to Pig Beach and we’d booked a day trip with a company called Hidden Beaches. This is honestly the most expensive excursion I have ever done. I researched so much into this trip, and looked into every option there was. Flying, power boat, ferry over to the islands and then small boats and this was the cheapest option I found. A day excursion on a powerboat from 8am til 4:30pm and was priced at $399 (and that’s US dollars) PER PERSON which takes you from Nassau to the Exumas.

The first stop of the trip after an hours very intense and fast boat ride was to Iguana Island. The Exuma Island Iguana is endemic to the Exuma Cays and are sadly endangered with only around 1,300 iguanas reportedly left due to their isolated location. 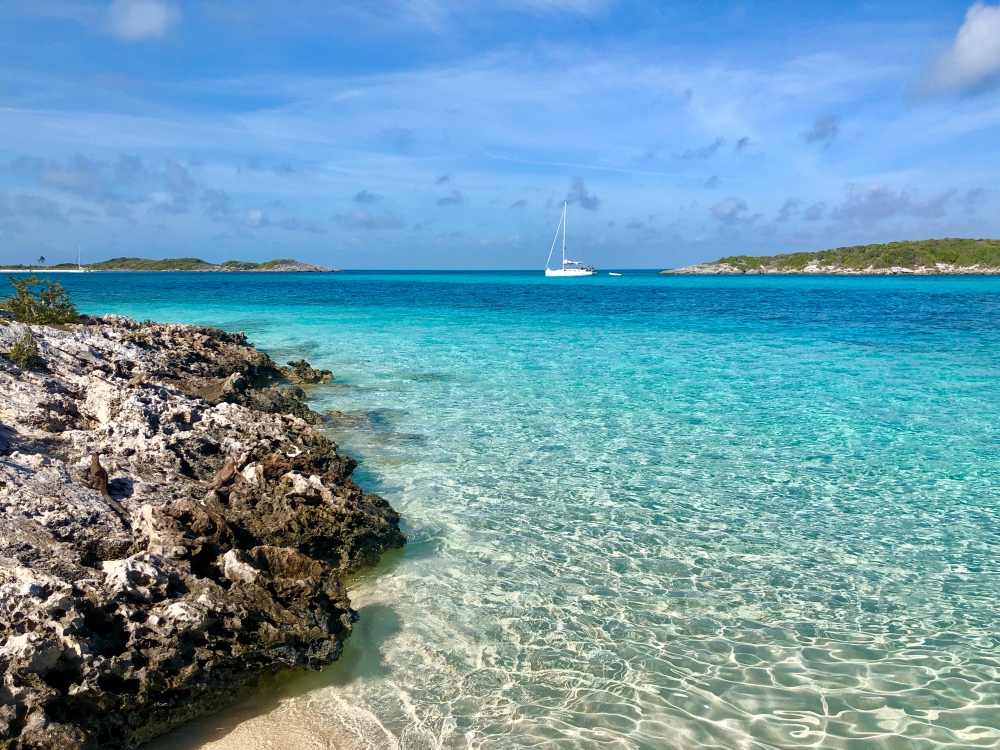 We pulled into the most beautiful cay with pristine white sand beaches, gorgeous blue seas and yachts moored up around surrounding islands. And the closer you got, the more you can see the many iguanas that adorned the sand. 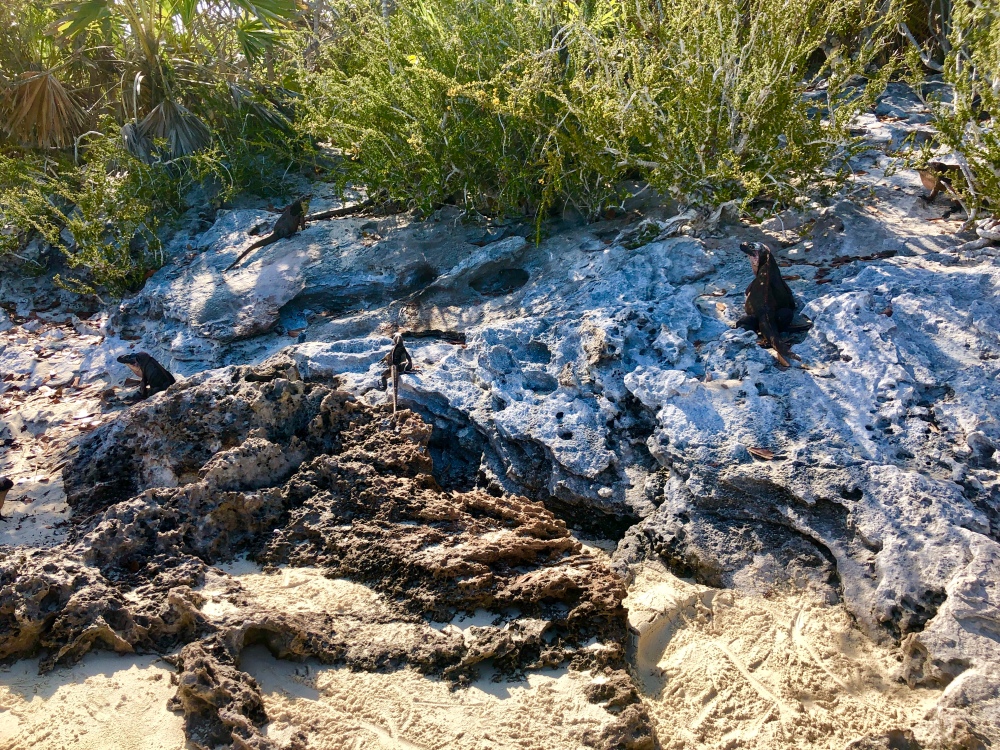 We were told that the iguanas like to eat bread and grapes and we were given a small wooden stick to place the food on and feed them. Some of the iguanas were pretty shy especially the smaller ones, yet the big ones would come out of nowhere when they saw you placing food on a stick for them. 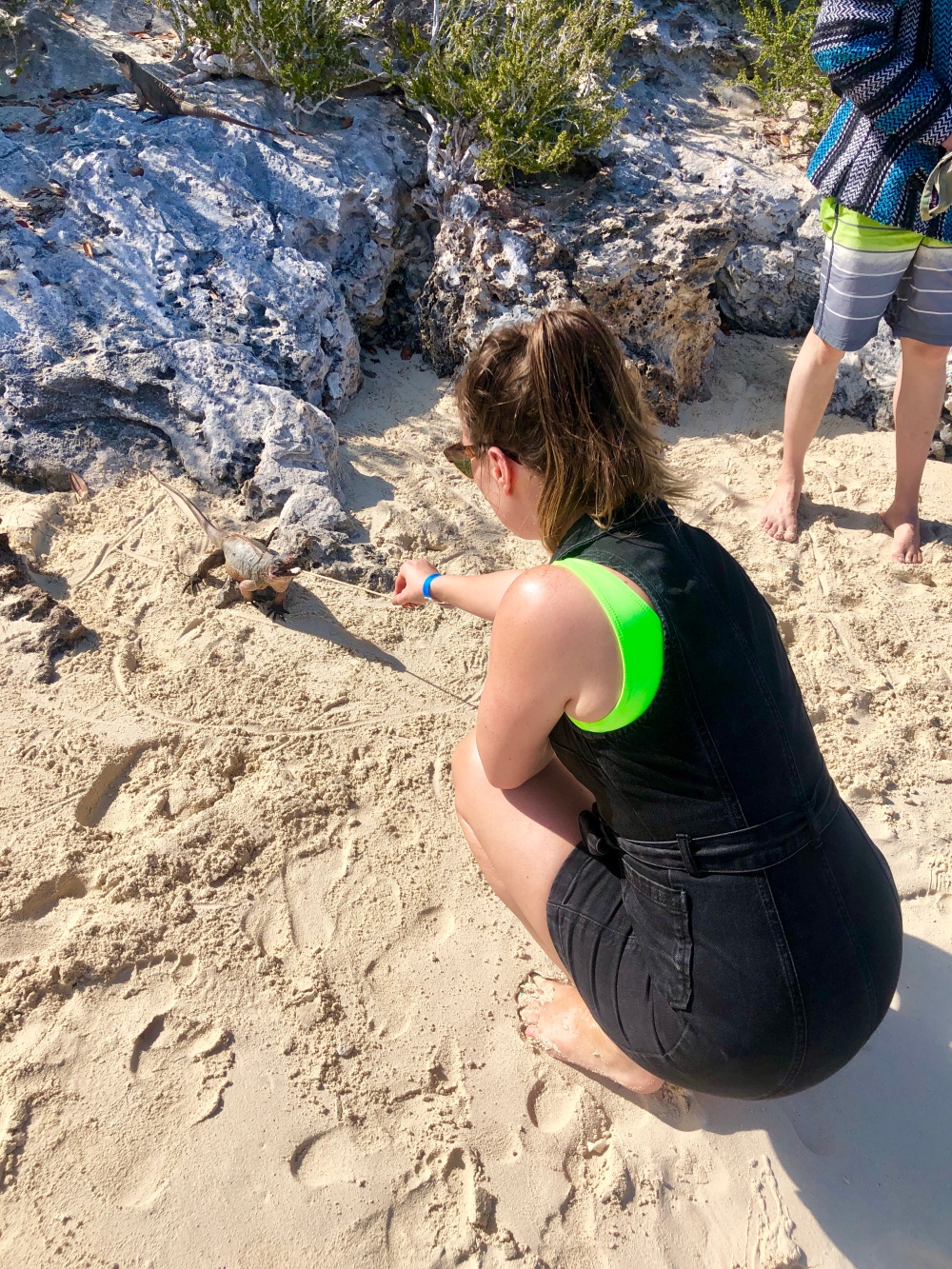 You had to be careful of painted nails and toes as sometimes they iguanas would mistake them for grapes and would try and bite them! We spent around thirty minutes here before it was back on the boat over to the next stop of the day.

When we were all seated the crew informed us that it was beer o’clock because it was “12 o’clock somewhere”, and I wasn’t going to argue with that, so we drove gently through the Exumas, sun shining down on us and drinking local Bahamian beer taking in the absolutely breath taking views. 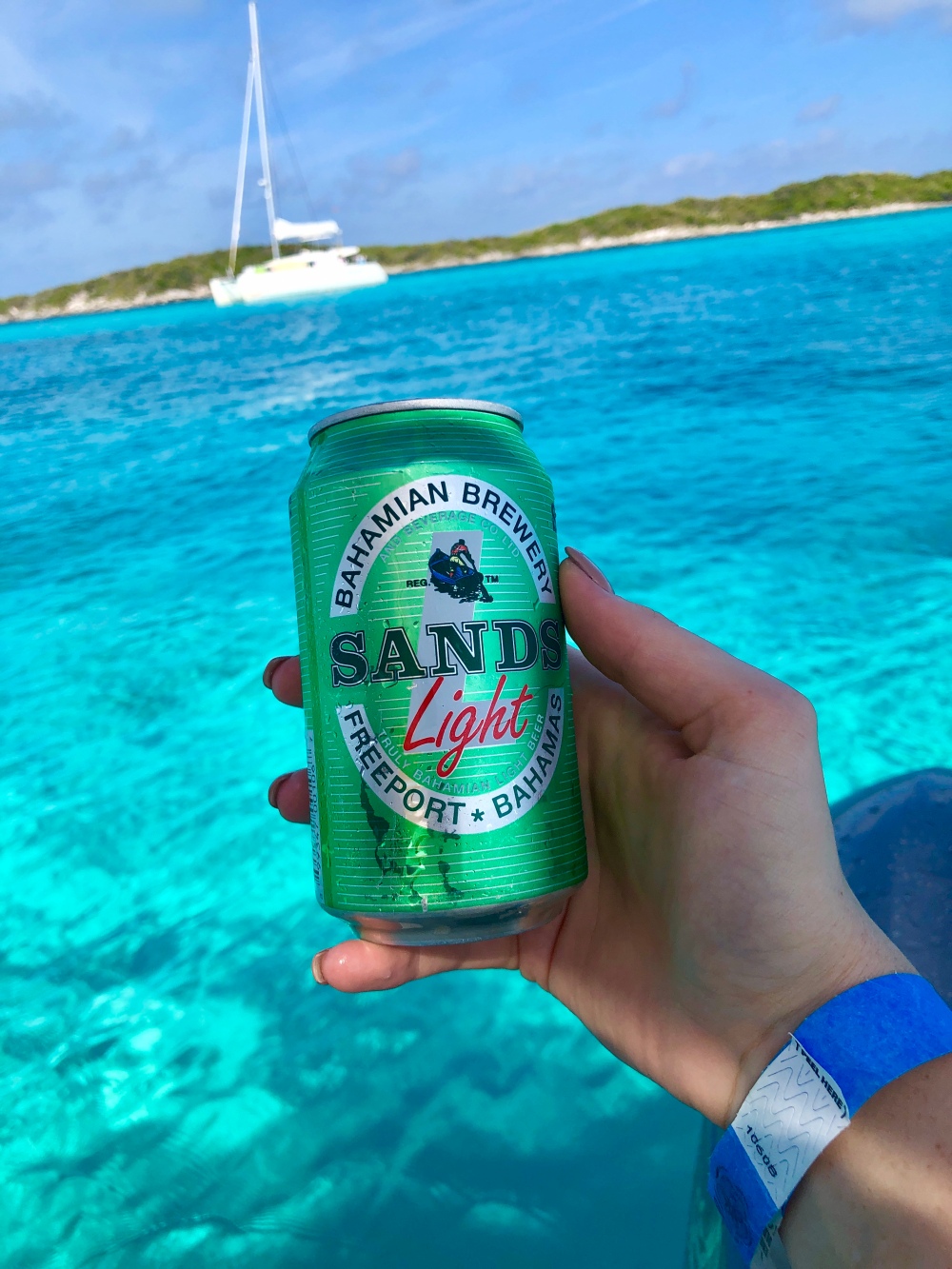 We were pointed out numerous celebrity islands such as Johnny Depp’s, Hale Berry’s and Louis Vuitton’s! For those of you have also seen the Fyre Festival documentary, we went past the island where we could also see things that had been left over from the absolute meltdown that was Fyre Fest. 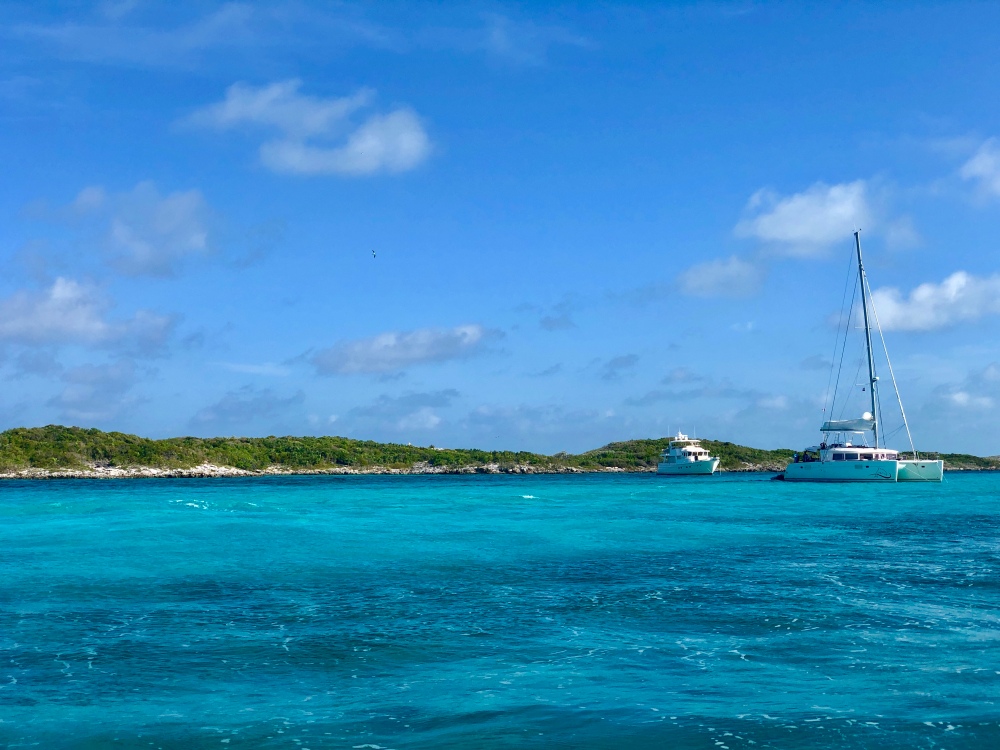 Our next stop was to Compass Cay which is home to an abundance of nurse sharks, and something I was a little nervous for but actually loved this part of the day SO much. What an experience this was to climb down into the water and be surrounded by these gorgeous creatures who were joined by a multitude of fish too! 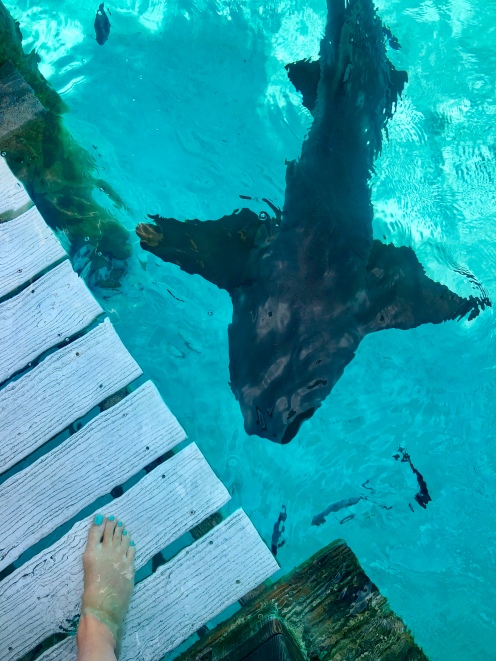 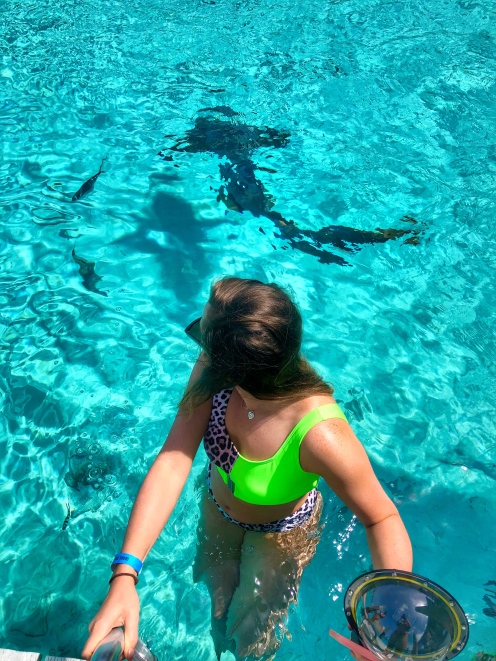 The water was the temperature of a warm bath and at first I was a little on edge because there was genuinely so many sharks circling round me, and they kept grazing your skin which was super rough like sandpaper and catching you off guard. 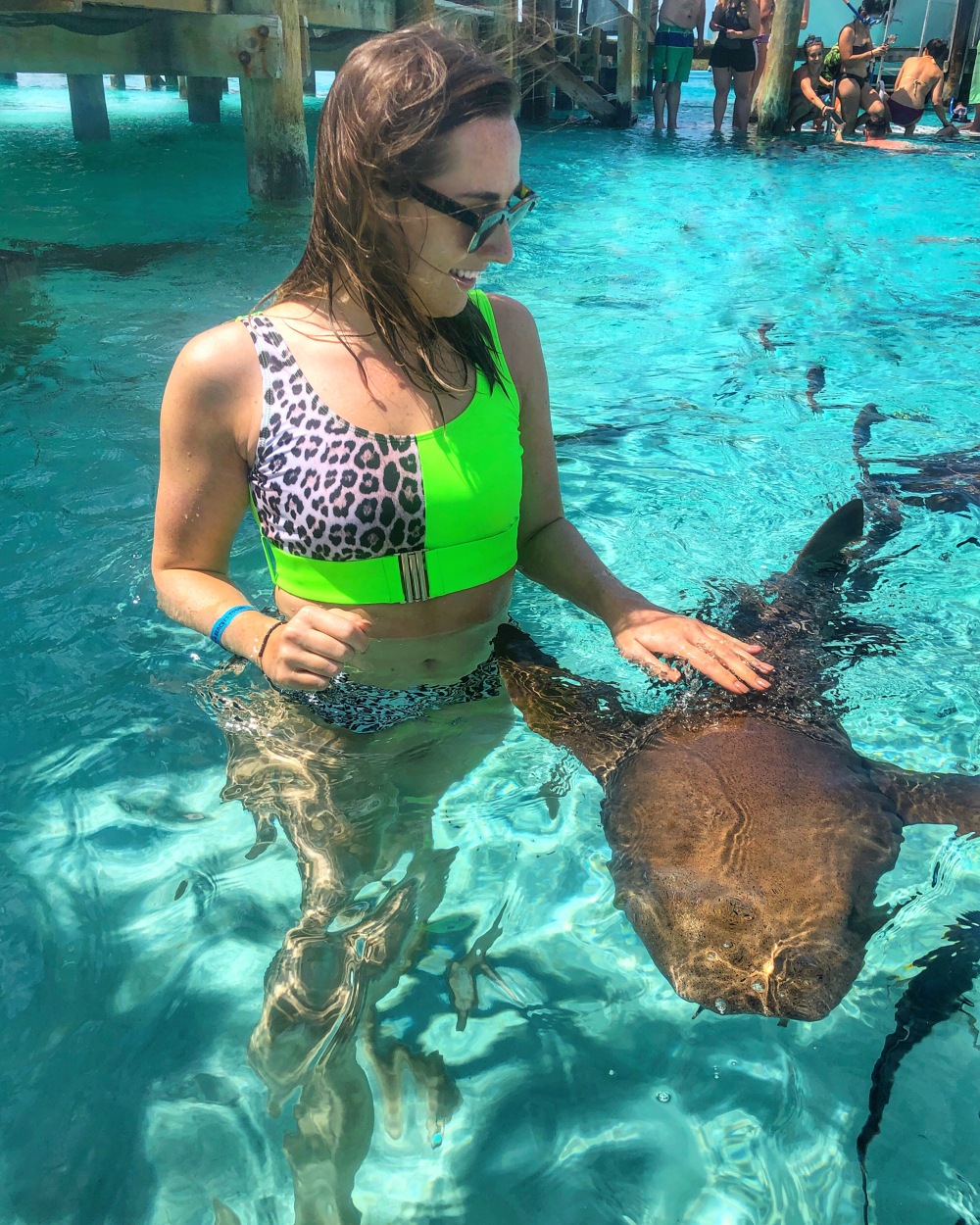 Compass Cay has become infamous for these docile nurse sharks that weigh around 60kg each, and they circle this small marina. There is also a small shop and restaurant here to make the most of your time if you weren’t wanting to get in the water with the sharks! 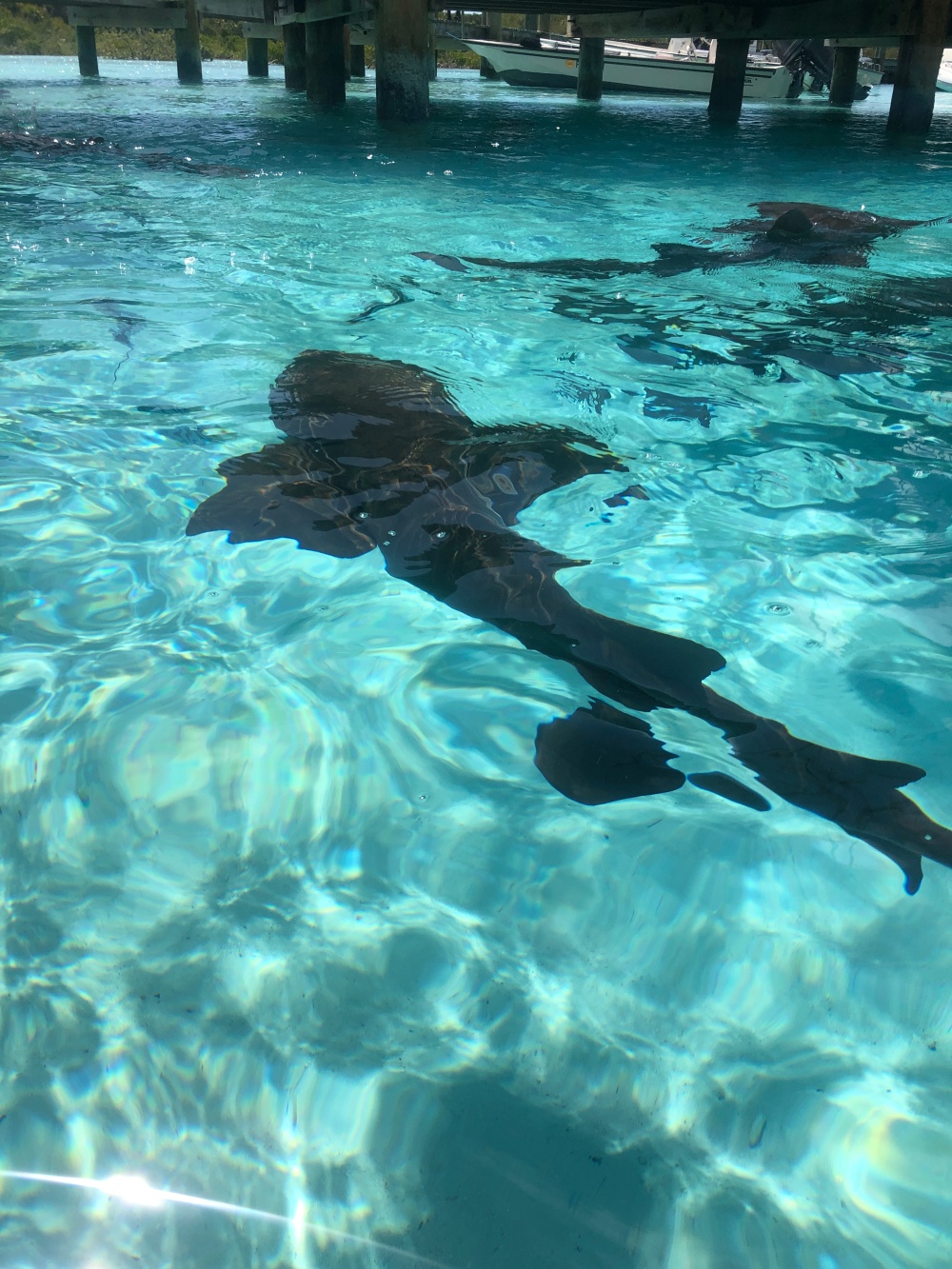 I felt so at ease in the water and could have stayed in much longer than the twenty minutes we were given. I just wanted to take one home as a little pet, not sure how I would house it in my apartment back in Dubai though! 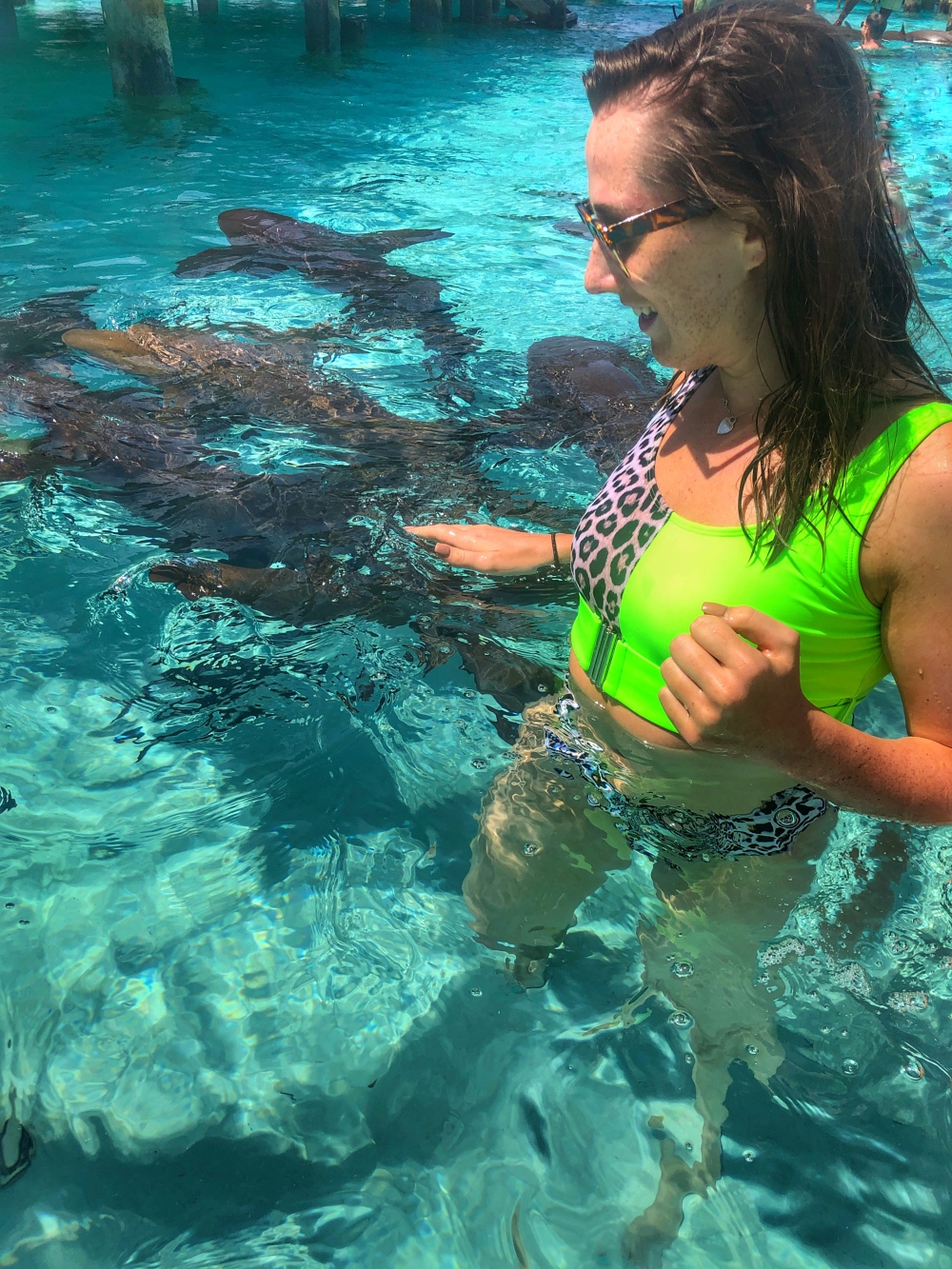 Back on the boardwalk we dried off very quickly in the sunshine and next stop was to pig beach which we couldn’t contain our excitement for. We pulled into the beach and could immediately see pigs on the beach and in the water swimming! Finally I was seeing these swimming pigs that I’d seen and heard so much on! 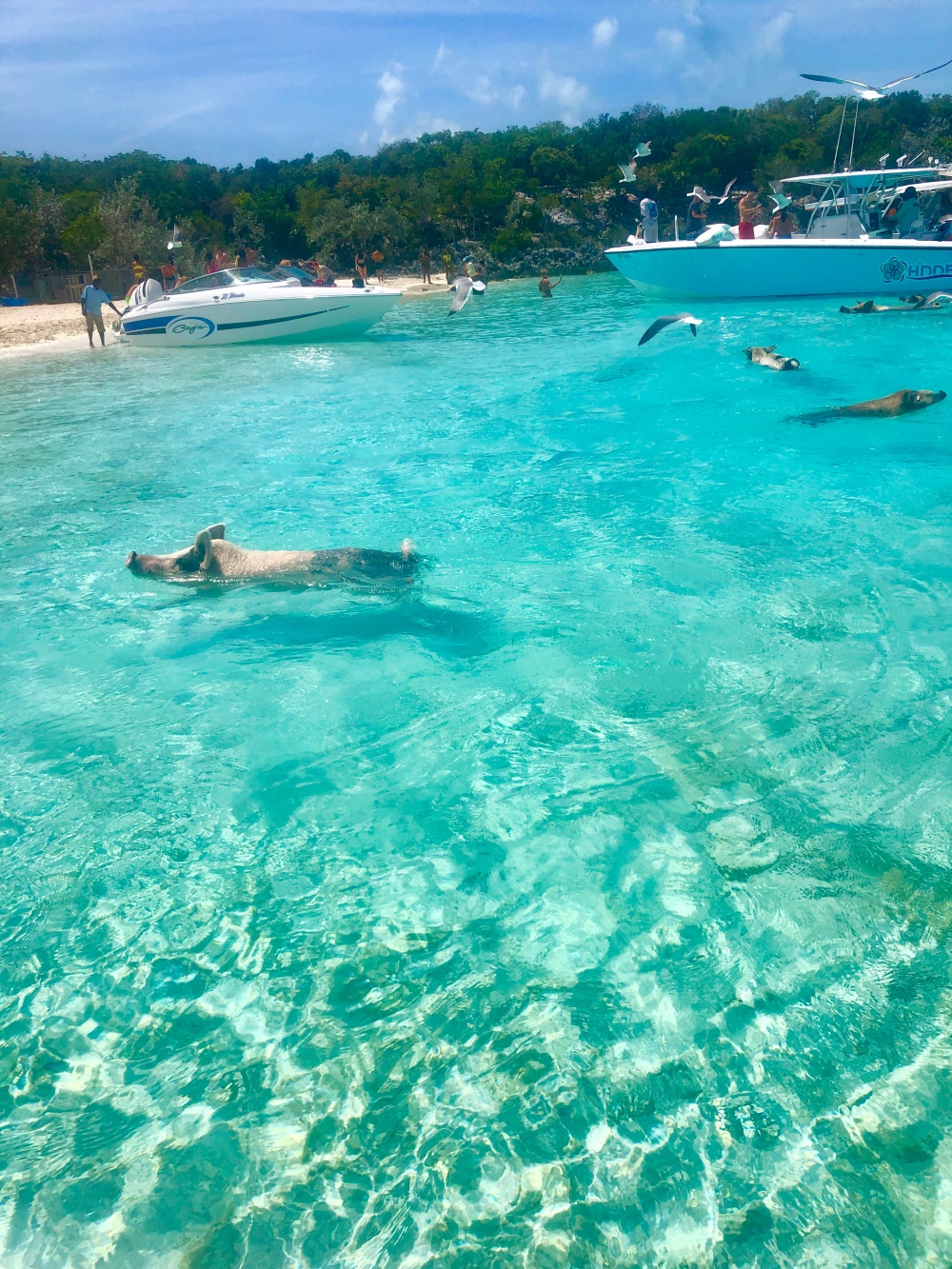 I’m not gonna lie, I found the pigs quite scary! I think I might have mentioned this before, but for those that don’t know, I’m really quite scared of dogs. And these pigs were like giant dogs that knew you were going to feed them, and they would come right up to you wanting food and are also known for biting. So I started with the little piglets on the beach first. Look how cute this tiny little baby is!!!!!!!!!!!!!! 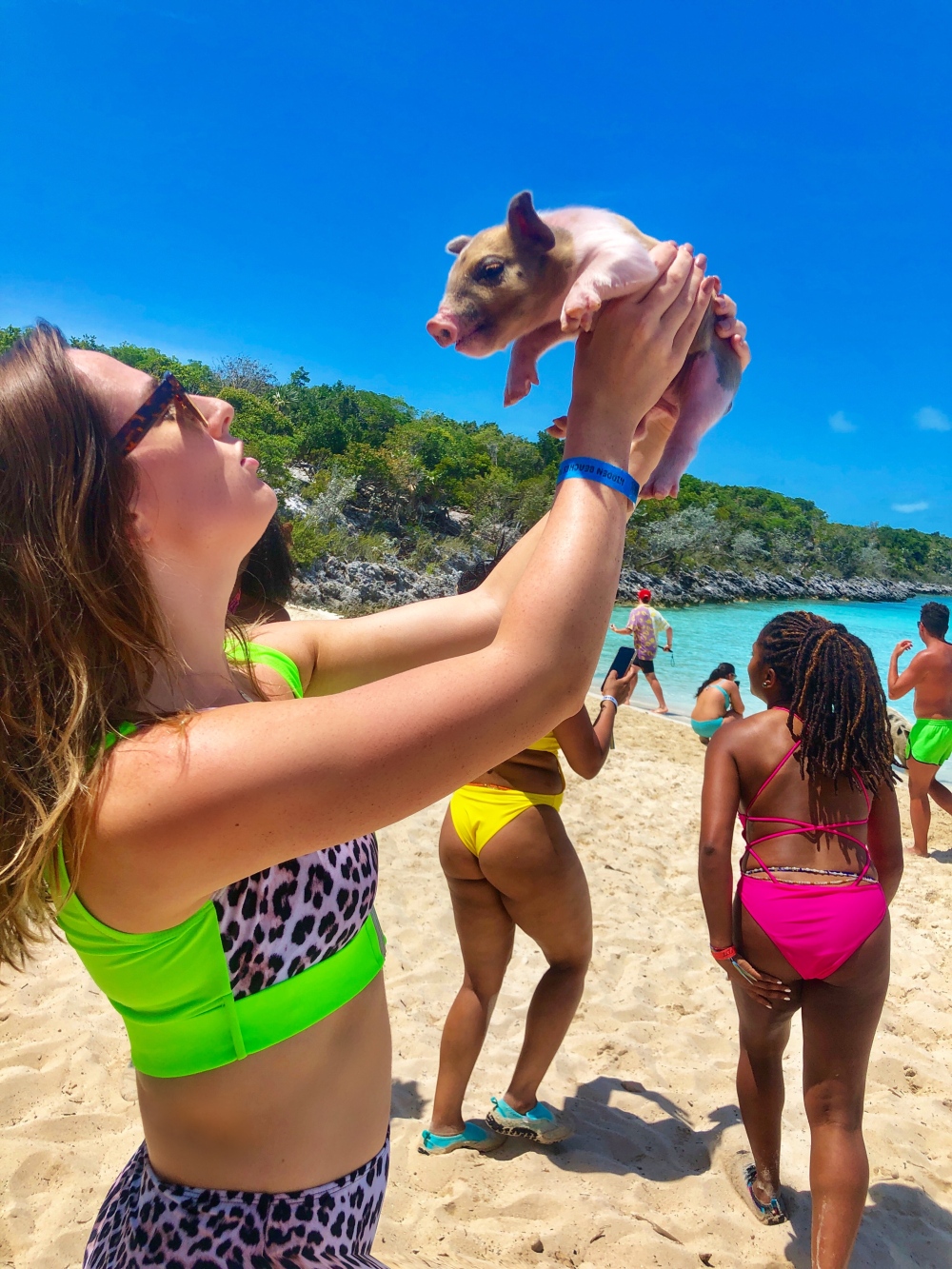 So I was quite nervous at first but one of the crew literally held my hand (I’m such a baby I know) and kind of eased me into it. I didn’t take any food for the pigs for a good while cause I was too nervous to feed them. It’s bizarre to think I so happily got into the water at Compass Cay and had numerous sharks swimming around me, but a pig on a beach was scaring the life out of me haha. 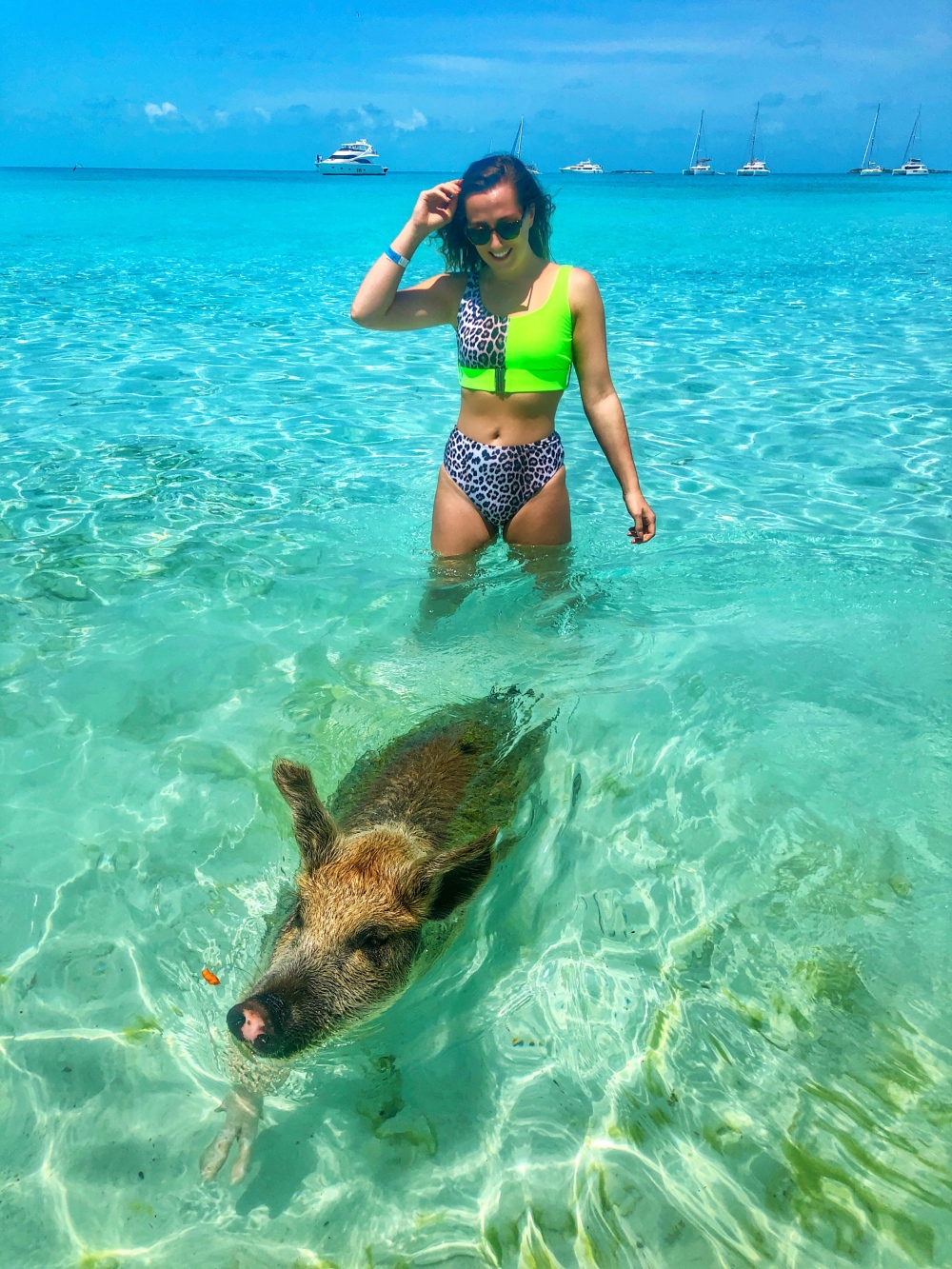 Pig Beach is an uninhabited island (or cay) located in Exuma, the Bahamas. The island takes its unofficial name from the fact that it is populated by a colony of feral pigs that live on the island and in the surrounding shallows. 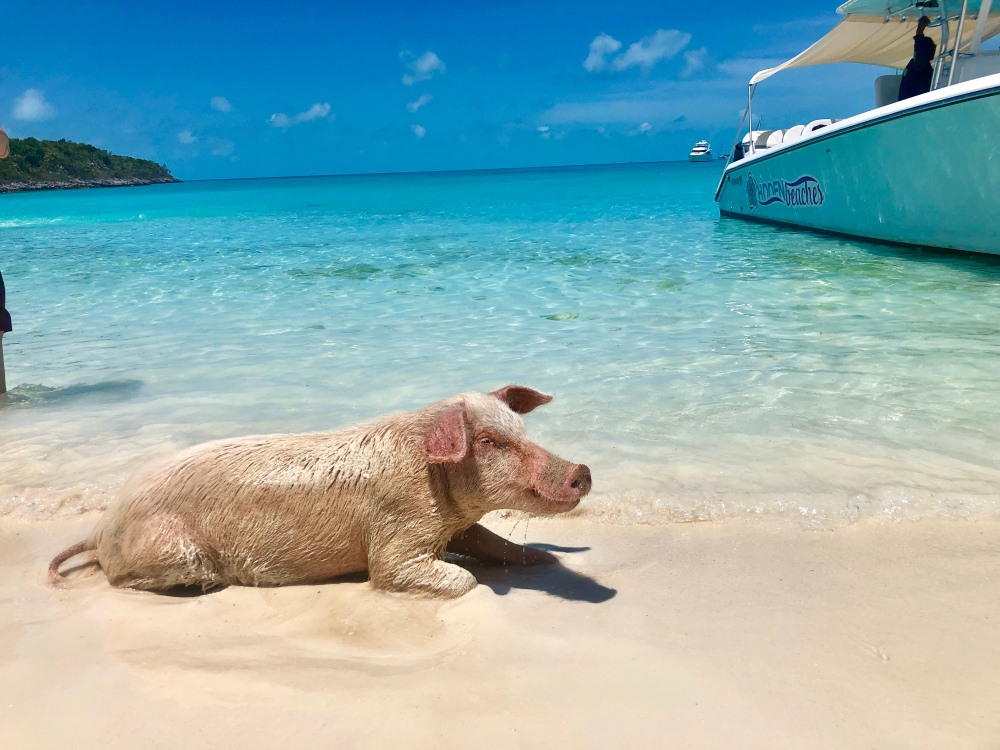 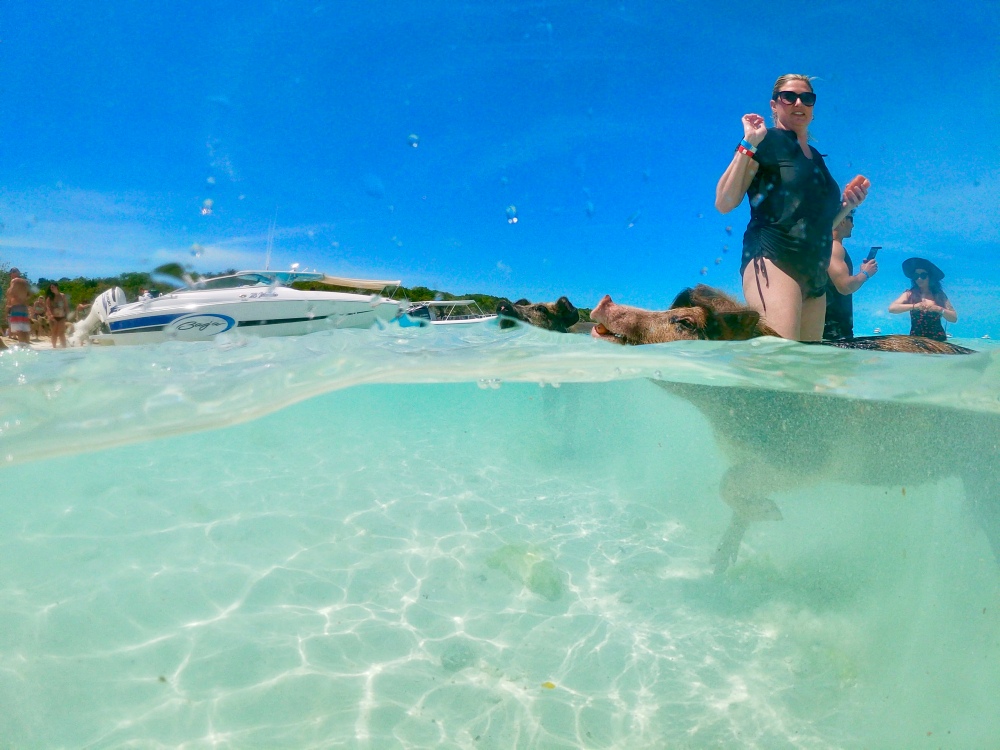 No one knows for sure just how these pigs got here, but there are a number of theories. One theory is that the pigs are said to have been dropped off on Big Major Cay by a group of sailors who wanted to come back and cook them. The sailors, though, never returned; the pigs survived on excess food dumped from passing ships. 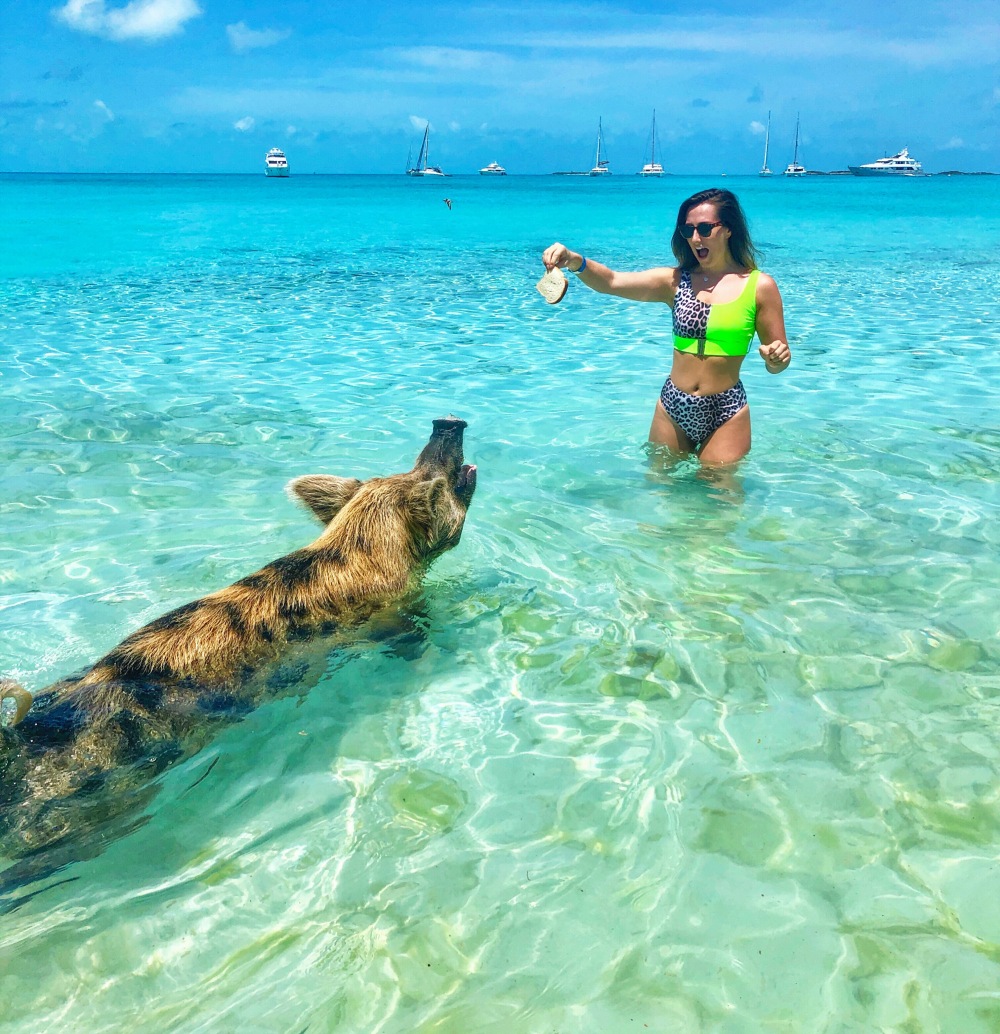 One other legend has it that the pigs were survivors of a shipwreck and managed to swim to shore, while another claims that the pigs had escaped from a nearby islet.

Others suggest that the pigs were part of a business scheme to attract tourists to the Bahamas. The pigs are now fed by locals and tourists and the island is unofficially known as Pig Beach by the locals. 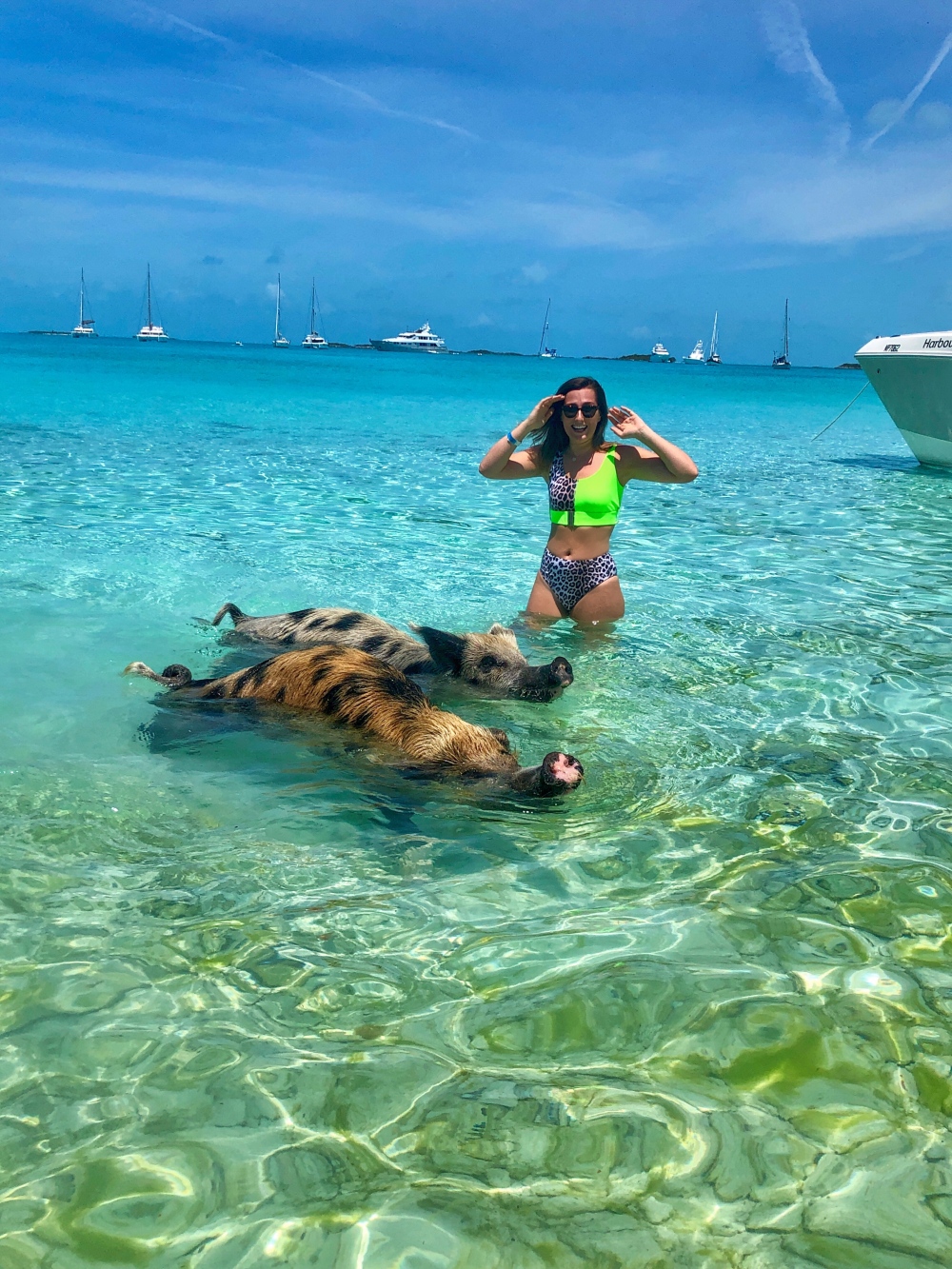 These two pigs swam out to me for a carrot that I had in my hand. When you have no food left you have to hold up your hands to show the pigs that you don’t have anymore food and they will leave you alone. When I showed them I had no more carrots, one of the pigs actually splashed me, TWICE!! 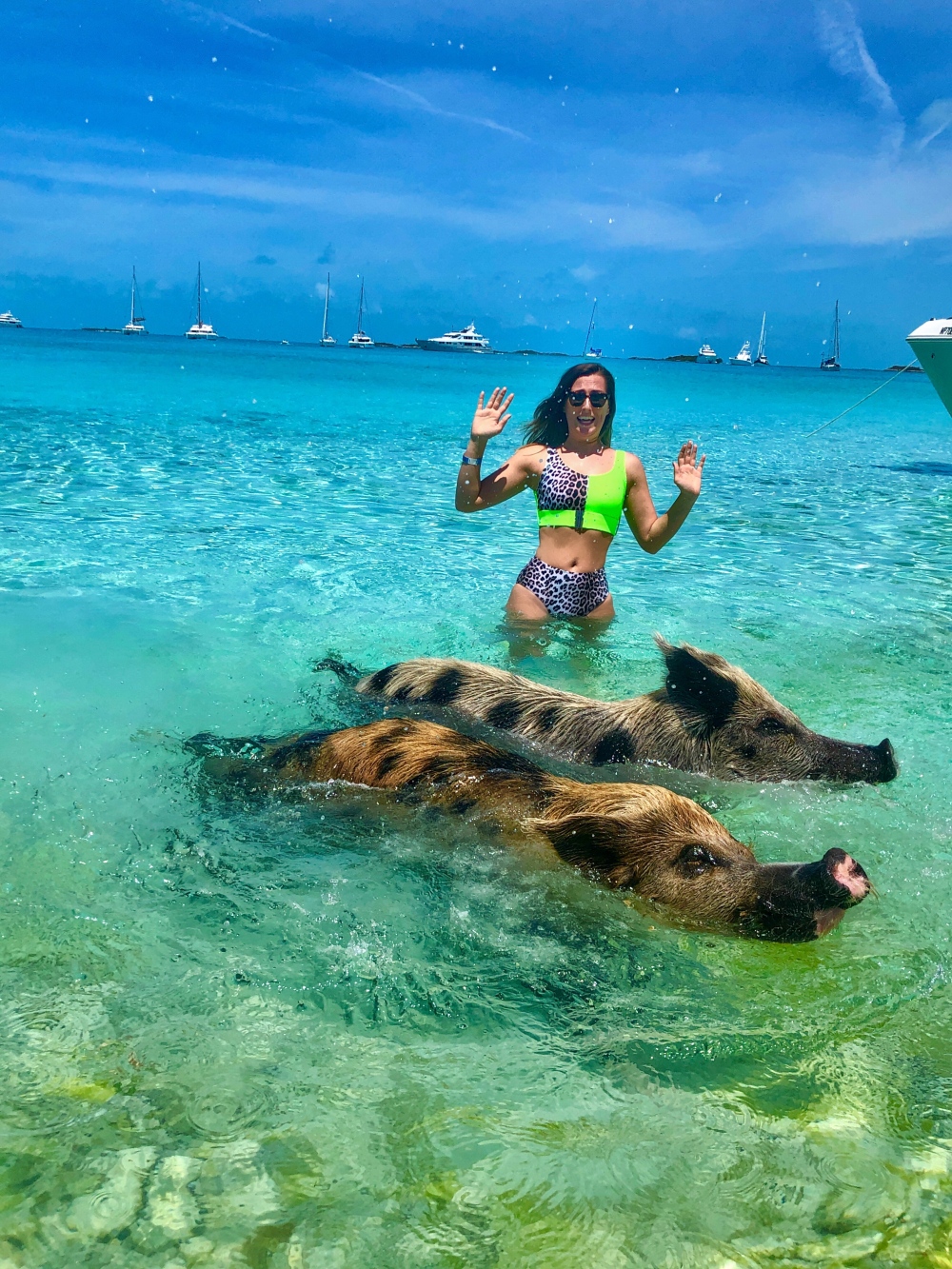 Our time on Pig Beach was coming to an end and it was finally lunchtime, which was included in the price of the excursion (thankfully). We went to Staniel Cay Yacht Club which was super busy with people who had just moored up their boats for a spot of lunch. The life that some people lead, hey?

We had a choice of a few options which we’d already decided on that morning before we set sail. I opted for a fish burger with coleslaw and it was really yummy! Washed down with another beer I really couldn’t complain at all.

Our final stop of the day was to a sandbar. A sandbar, or shoal is a landform which is in or partly in a body of water. Usually it is made of sand, silt, and/or small pebbles. The sandbar was in the middle of the sea and looked like the ultimate definition of paradise. 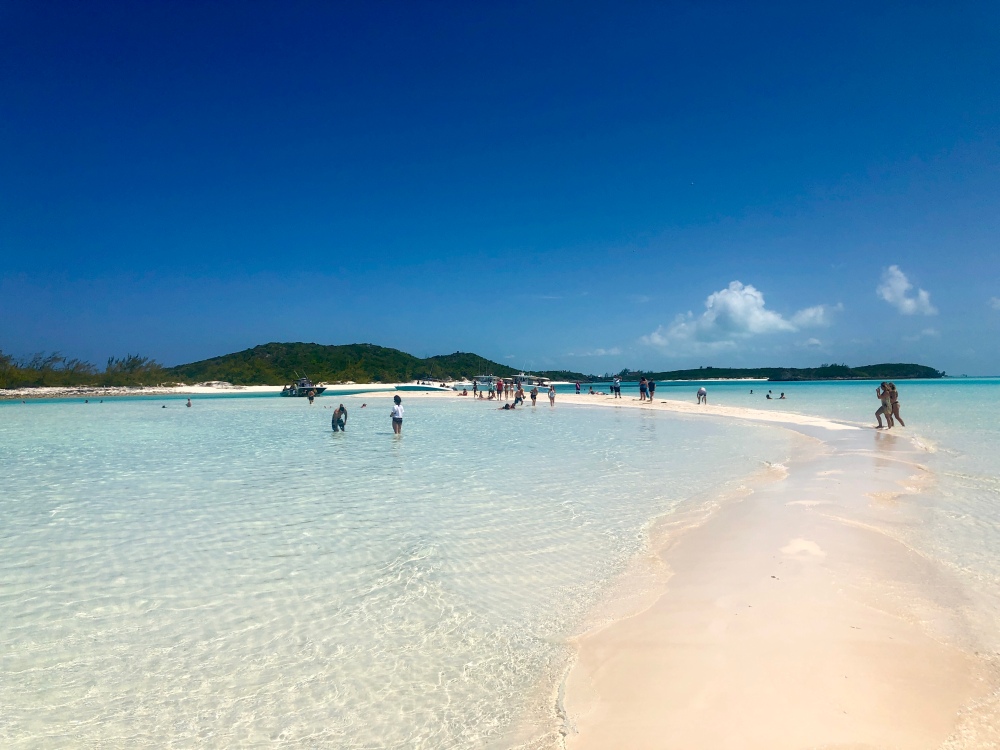 We had just short of an hour to relax here. The boat was playing some Bahamian music, the beers were flowing and we sat in honestly in the most idyllic setting I have ever sat in.

This is the definition of heavenly and I wish I could have spent an entire day here. The water was the perfect temperature, the water was lapping so gently against our feet and other than our boat, there was nobody else here. What a dream. 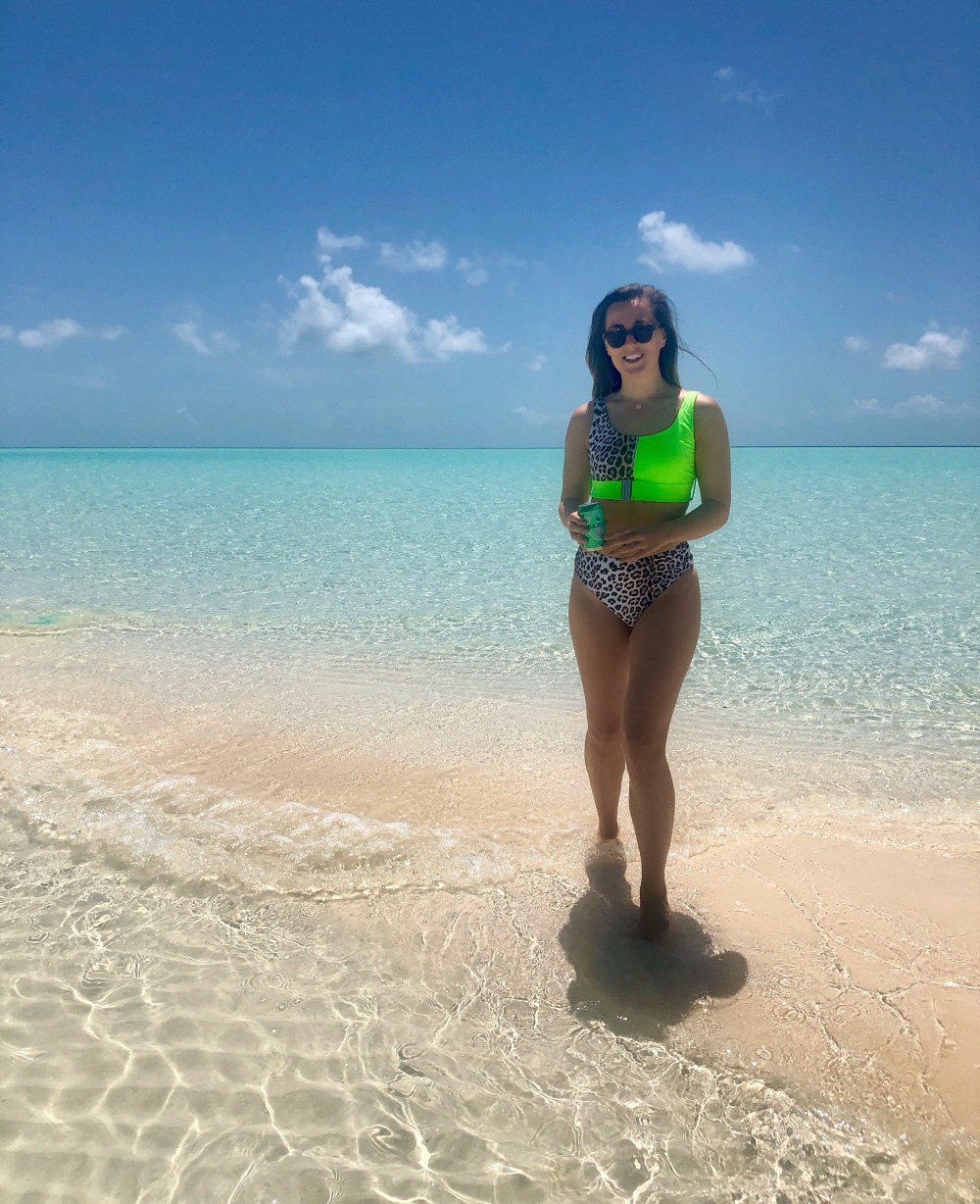 What was also super cool to learn was that Johnny Depp has stood on this very sandbar when they were filming Pirates Of The Caribbean, so basically, I’ve walked the same sand as Johnny Depp.

Sadly our time came to an end, and so did the end of our excursion and we began the journey back to Nassau. 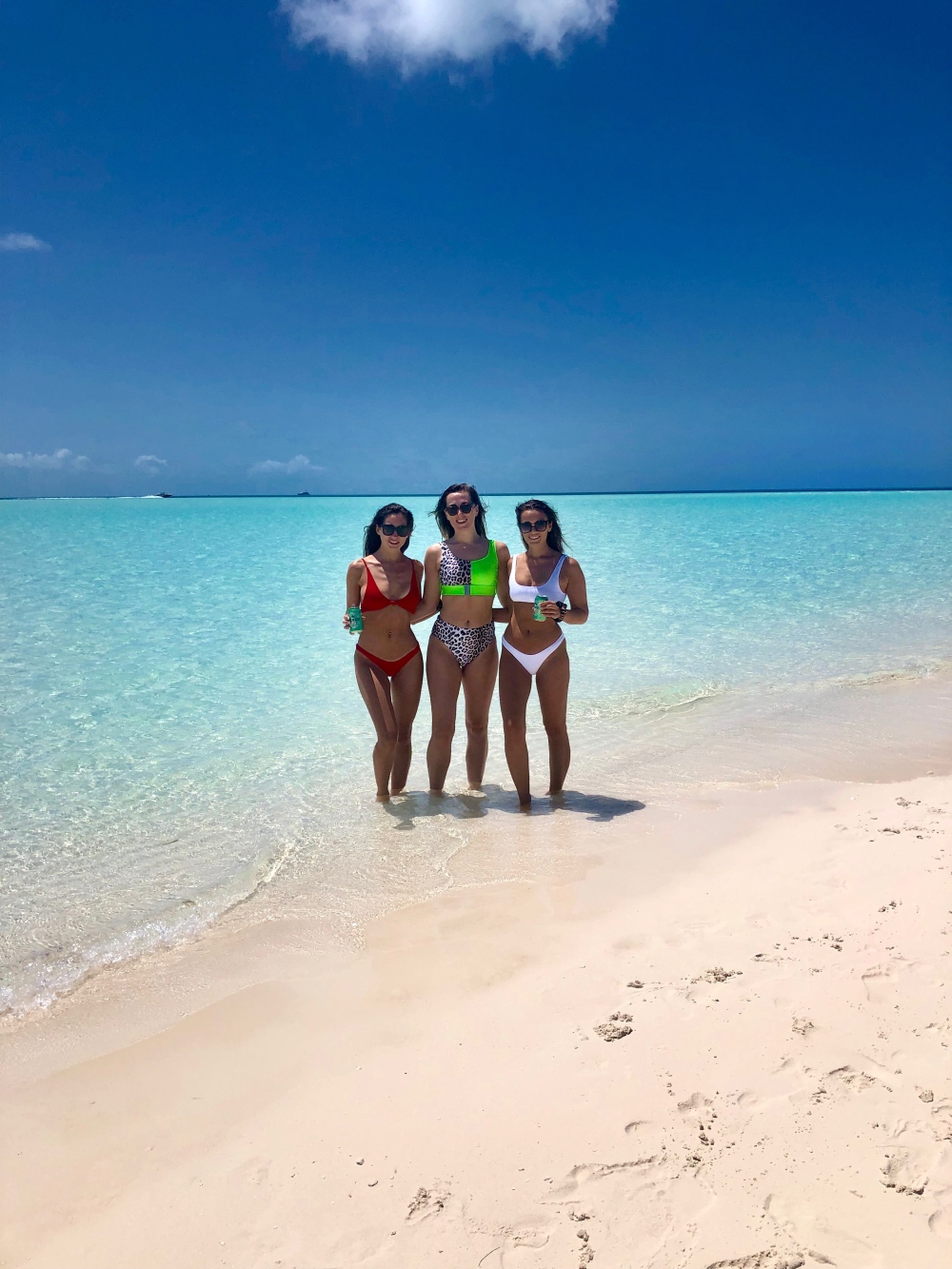 This is without a doubt one of the best excursions I have ever done, but do I think it was worth $399 per person? No, but you don’t really have a choice, as they are all so extortionately priced. I ticked off some serious bucket list stuff I’ve wanted to do for the longest time and it really was everything I wanted it to be and more. One thing I seriously loved was how well preserved the islands are. I did not see one bit of rubbish, or something that shouldn’t be there. So if that price is towards environmental conservation and preservation of this absolutely stunning environment, then I do not mind to pay that at all. Add this to your bucket list if it isn’t already, and if it was already on there I can’t recommend doing this enough, get your flights booked. It’s a day I will never ever forget and I loved that I got to visit the Exumas with two of my best friends.