Continuing on from my last post, we finished up brunch at The Butcher’s Daughter and went back to the hotel to change and freshen up after Soul Cycle before we continued on with our day a couple of hours later. We caught the subway uptown to near the top of Central Park and strolled through towards the Loeb Boathouse. We were feeling a little peckish, so decided on a detour to Halal Guys for a quick snack, as shockingly Grace and Chantelle had never had it before, and we sat in the sunshine tucking in. For anyone who hasn’t been to Halal Guys, I urge you to do so. It is without a shadow of a doubt the best food cart ever. SO GOOD. 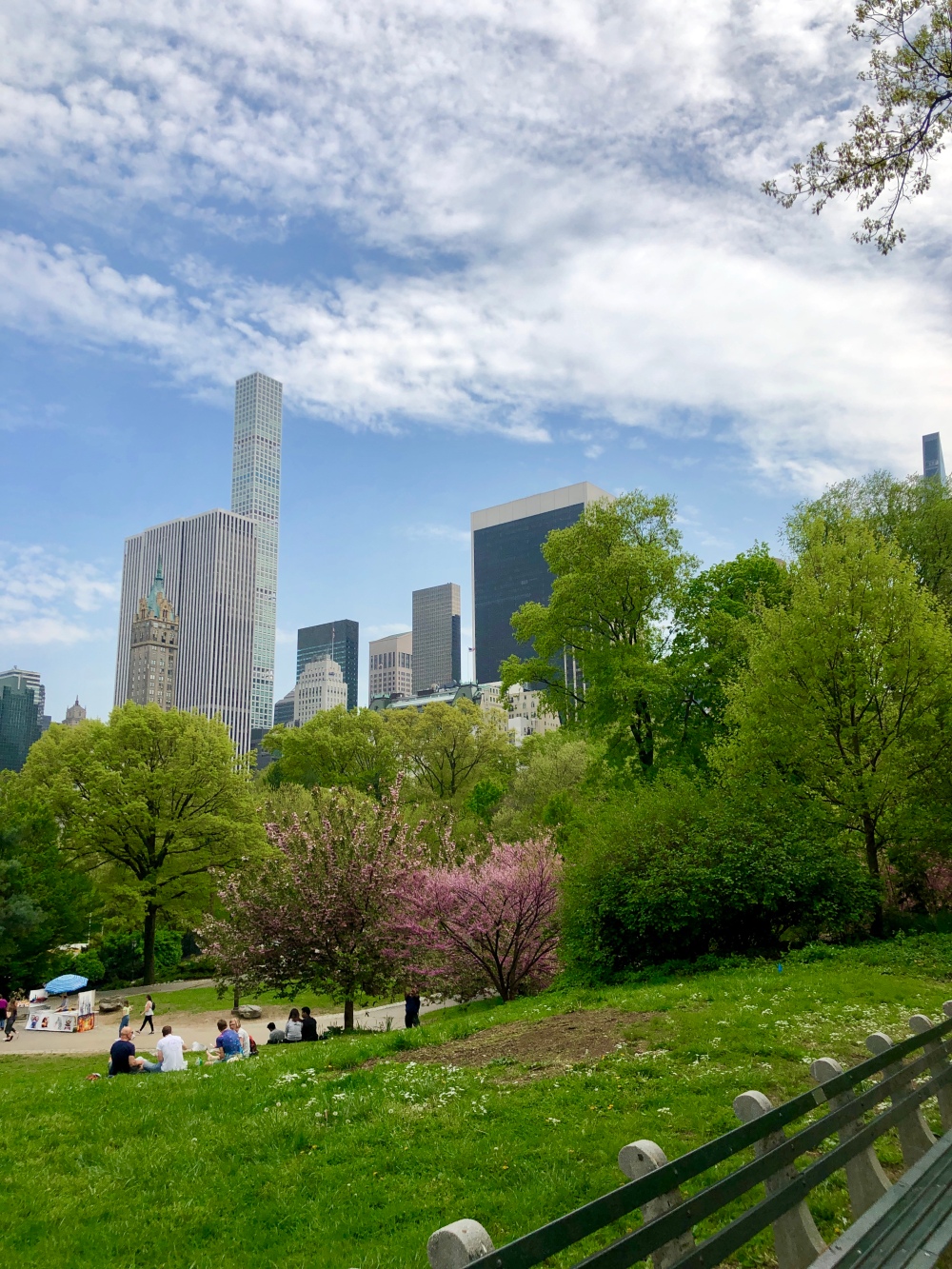 Back up into Central Park we rented a boat for an hour and I think its a really good price too! It costs $15 for the rental with a $20 refundable deposit. We jumped in the boat and rowed out onto the lake in the middle of Central Park which is actually wayyyyyyy bigger than you would think! 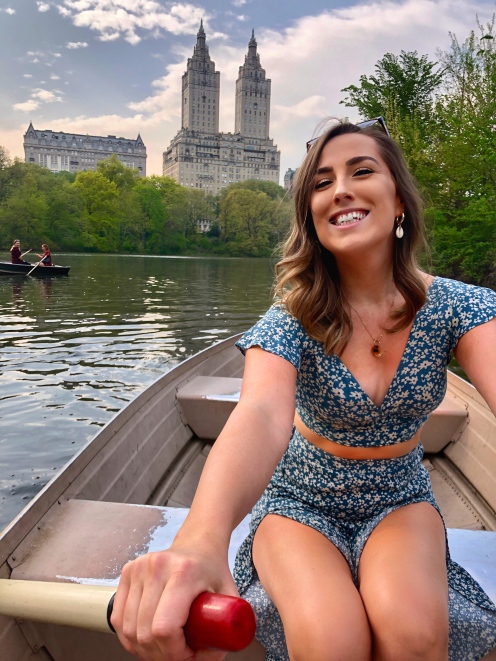 The sun was shining, and we’d made Grace wear a birthday hat and badge so that everyone could know it was in fact her birthday. What a cutie, hey? 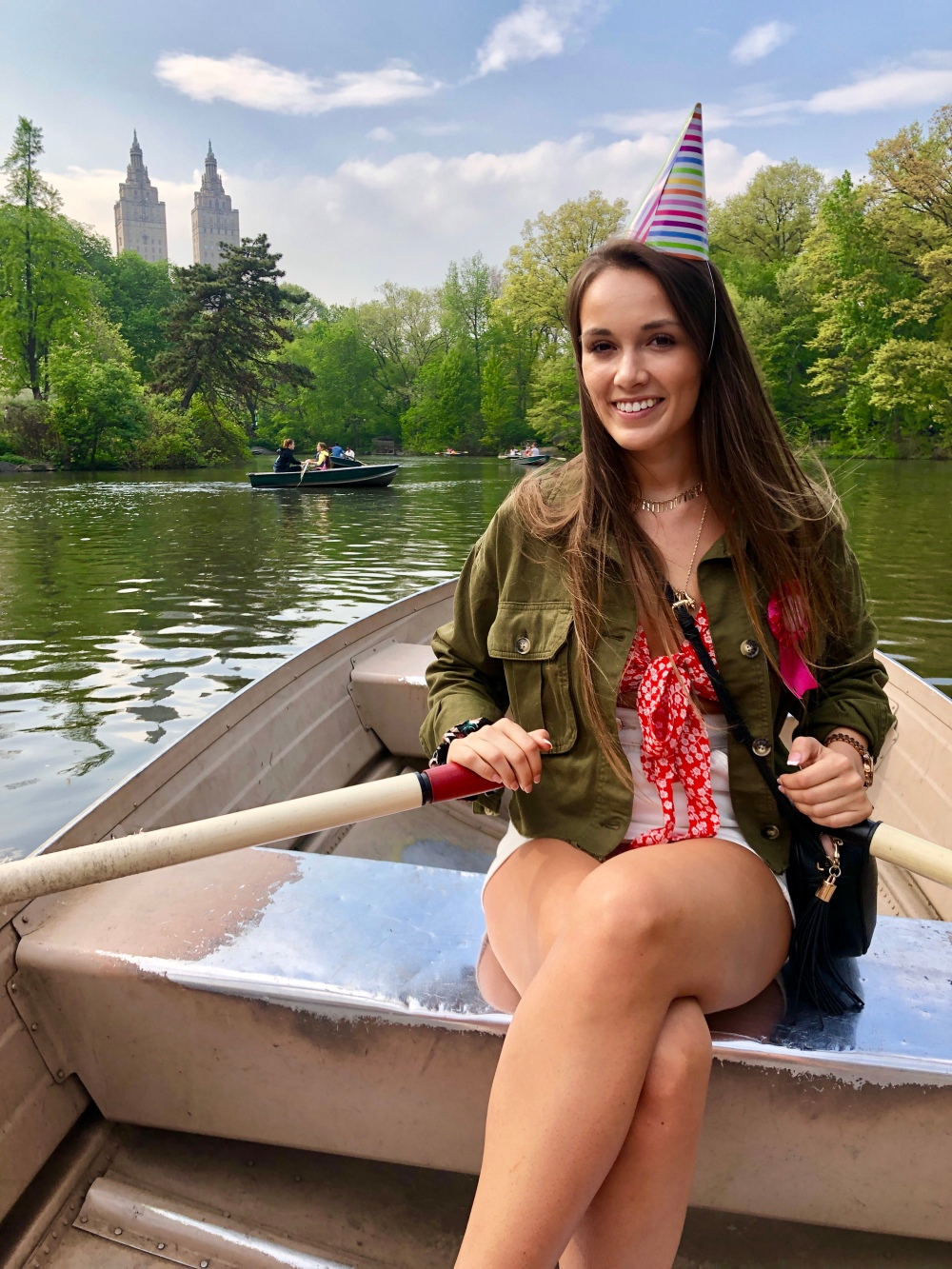 The rowing was quite difficult actually, and a few times we accidentally ended up bumping into other row boats. But it was great fun and a good arm workout. Highly recommend doing this in New York!

After a good hour out on the water, we called into the bar by the lake for a birthday beverage. Opting for three Aperol Spritz, we sat chatting away in the sunshine before we made a move back to the hotel. 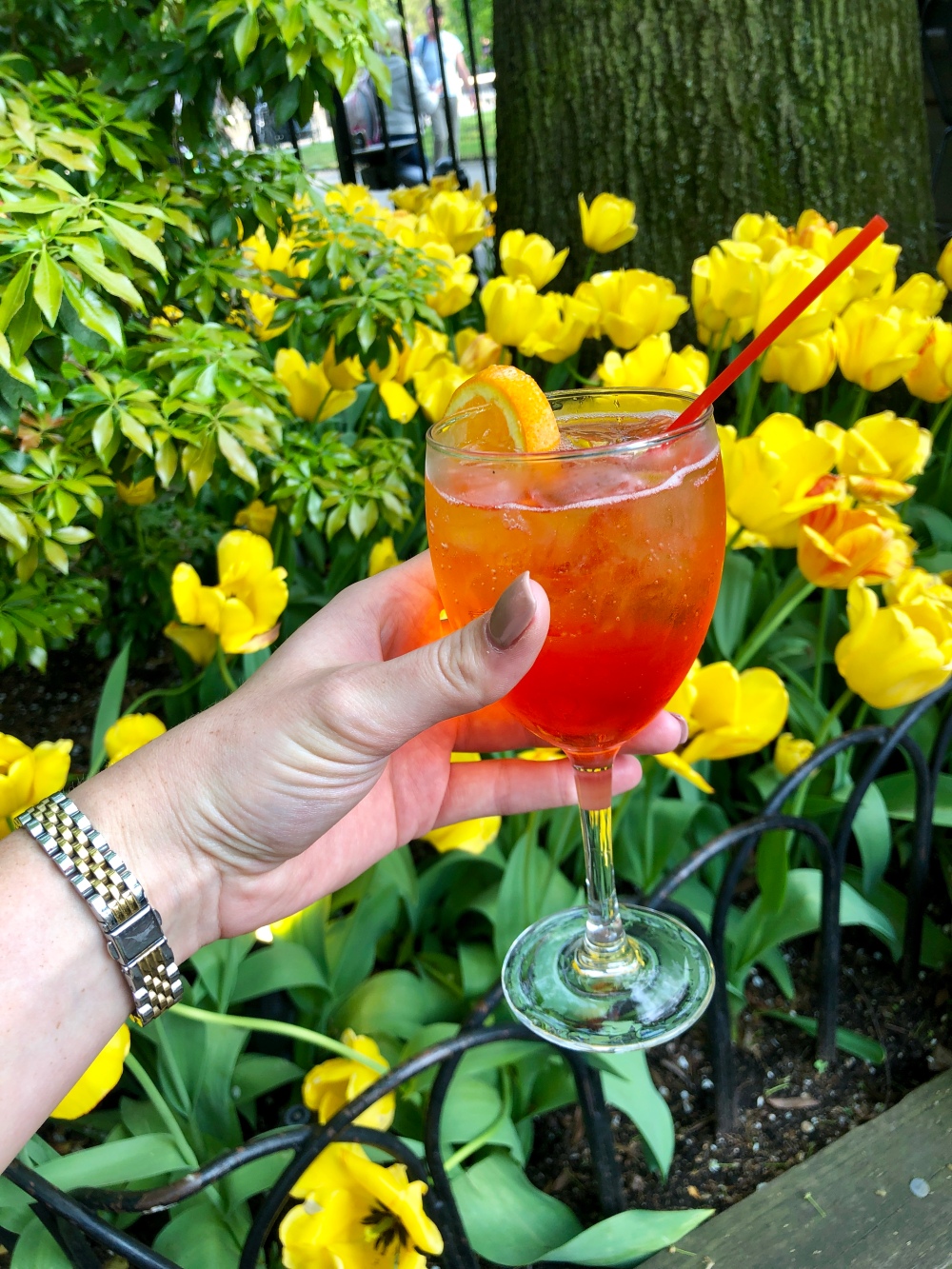 That evening we had dinner reservations at a place called TAO Downtown which serves up Pan Asian and has a club inside too. We sat down and ordered a bottle of wine and an array of vegetarian dishes (Grace is vegetarian) to share amongst us. 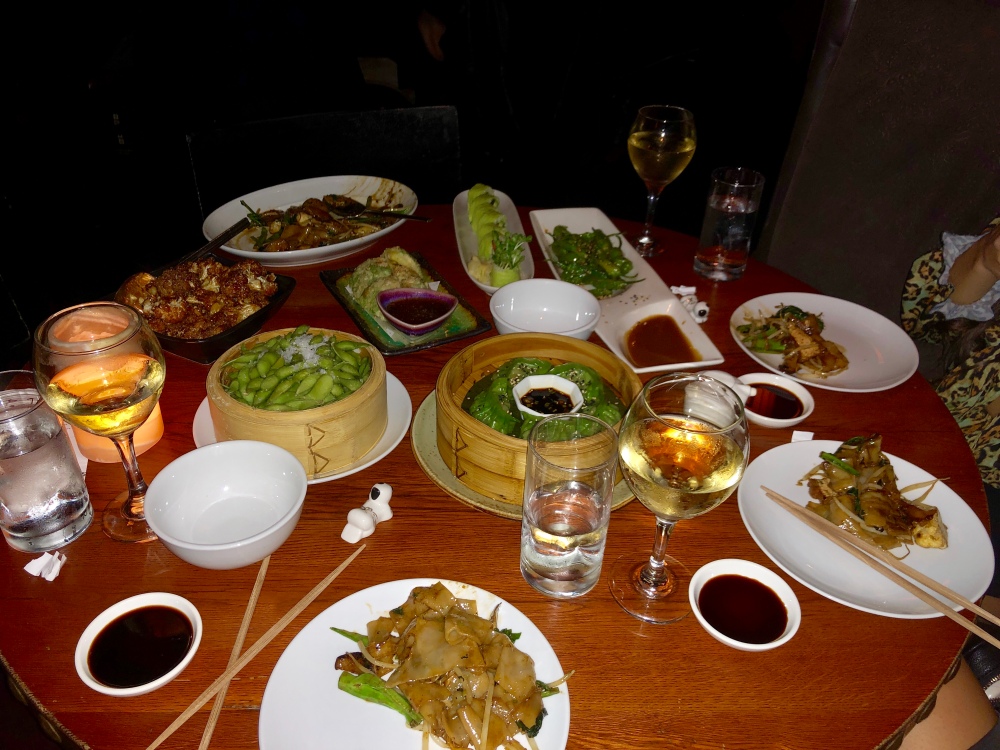 If you do want to go here, make sure you reserve a table prior as we had a reservation for 10:30pm (only time we could get in) and it was absolutely packed out. After dinner, we headed through to the club for a few drinks. We didn’t really rate it in TAO, so after about thirty minutes we left and went just down the road to 1OAK.

The next morning, we definitely woke up a little worse for wear after getting in at 4am, which kind of ruined the plan we had for the day. Wanting something to eat, we made our way over to the Flat Iron District to a place called Eataly. They have a gorgeous rooftop restaurant completely covered in flowers serving up a small menu.

We shared some bruschetta to start with and all opted for a bowl of pasta. Mine was amazing and filled with peas, garlic and pancetta. Service here was really bad though, and even though the restaurant was super pretty to look at, it felt as though not one person who worked there could be bothered to serve us. Before I even had a chance to ask for a drinks menu, our server had walked off and we couldn’t grab anyones attention until the food arrived. 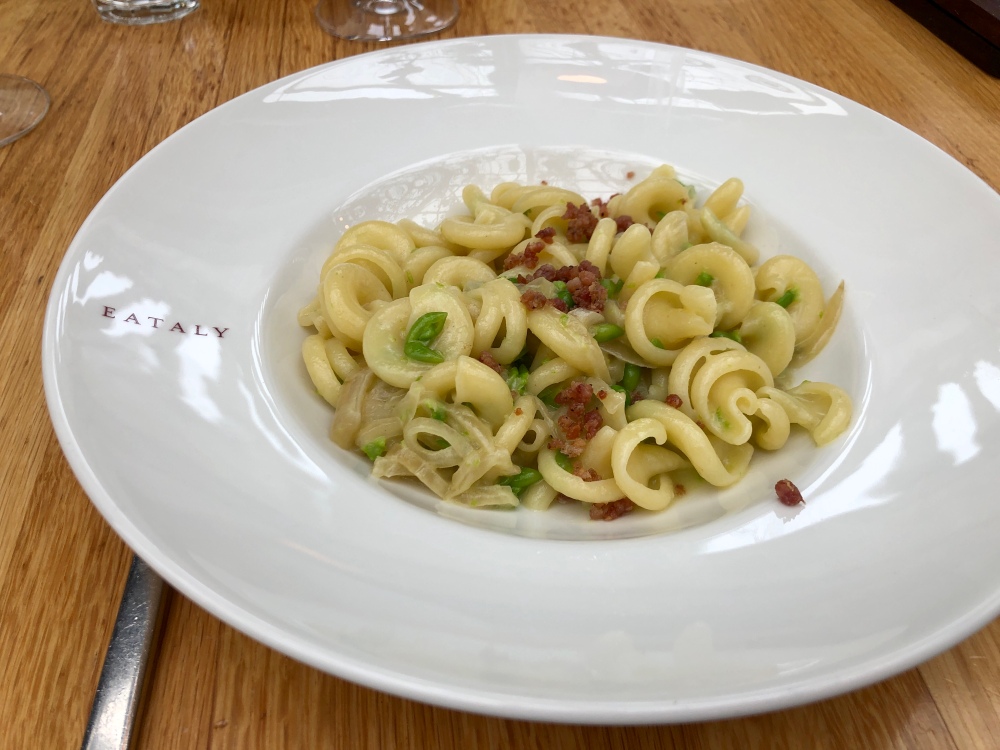 We paid the bill, which may I add still had our starter plates and main plates, and left before heading over to a new addition to New York which is a structure called The Vessel TKA. The Vessel is a public structure and landmark that was built as part of the Hudson Yards Redevelopment Project in Manhattan, New York City, New York. Construction began in April 2017; it opened on March 15, 2019.

Designed by the British designer Thomas Heatherwick, the elaborate honeycomb-like structure rises 16 stories and consists of 154 flights of stairs, 2,500 steps, and 80 landings for visitors to climb. Vessel is the main feature of the 5 acre  Hudson Yards Public Square. Its final cost is expected to be $200 million. 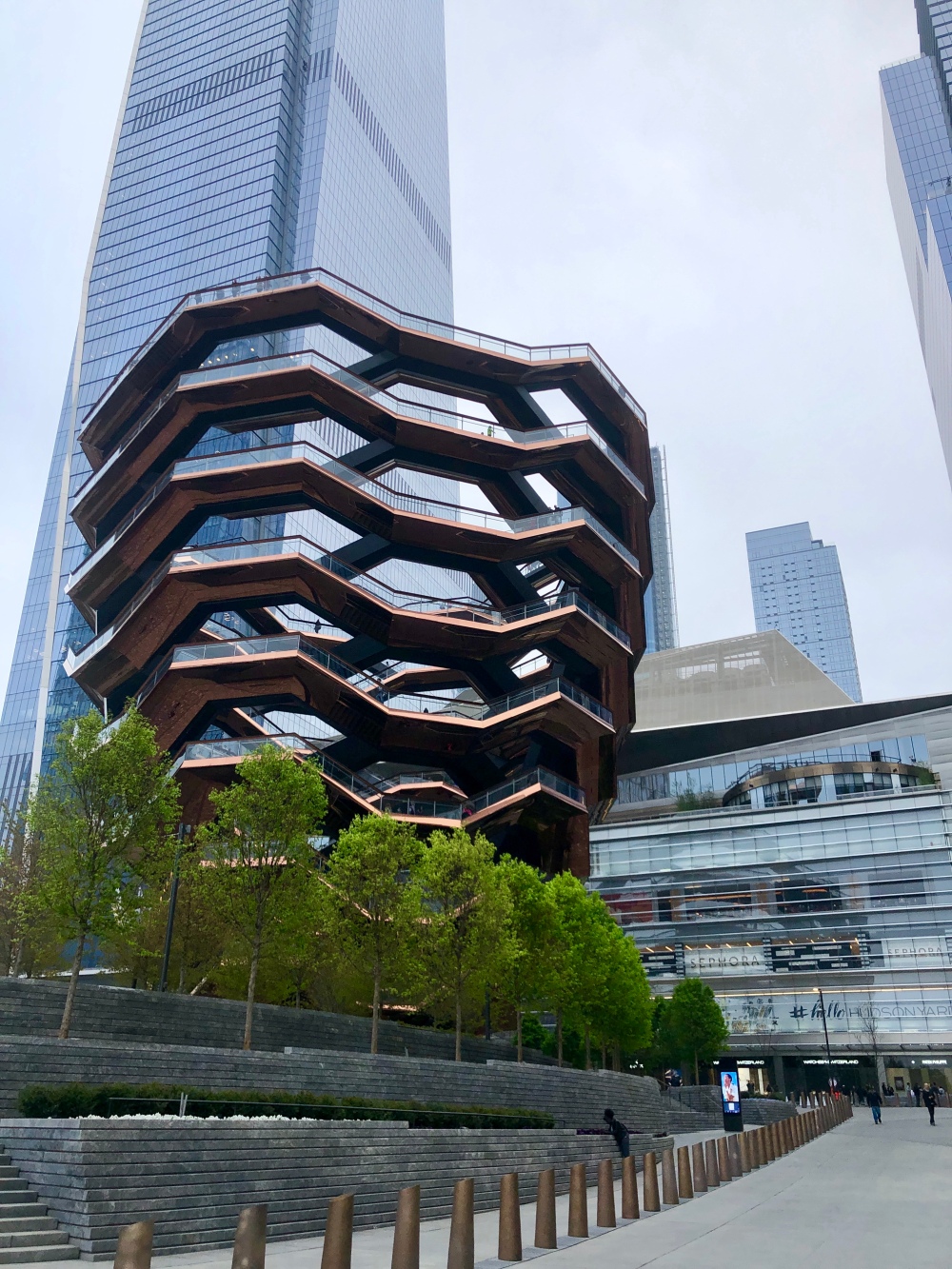 The structure’s name is a working title, noted in the TKA abbreviation, which means “Temporarily Known As”. The structure owners have asked the public to give it a formal name and have a website devoted to naming it. One of the most discussed names on social media was “The Shawarma”, after the cone-shaped meat popular on street carts.

What’s good to note, if you’re planning to visit The Vessel, is that you do need a ticket to venture up here. Which is probably good for crowd control on this small structure. Tickets are free but provide timed slots. They weren’t available for over three hours here, and with us having plans in the evening, we had to pass it up. But something to add to my New York to do list.

Next up we were walking up towards Times Square as we had tickets for Frozen on Broadway that evening, and I cannot put into words how excited I was for this. For starters I absolutely love the film Frozen. Idina Menzel, the voice of Elsa in the film Frozen, is one of my all time favourites from Broadway. Idina’s voice on the Wicked soundtrack is out of this world and I would have loved nothing more than to see her perform as Elpheba in Wicked. This paired with Kristen Bell as the voice of Anna made for a great film, and when I saw they were bringing this Broadway I couldn’t wait to see it.

The show was absolutely phenomenal. The cast, the costume, the staging, the music, the special effects and one of the best and fastest costume changes I have EVER seen. It completely blew my mind and all of the audiences. I’ll link a little sneak peak down below, but WOW. What a show. Something for everyone of all ages, get your tickets booked.

After the show, we walked back to the hotel, not before grabbing $1 pizza slices. This is something new I’ve found out about in New York, and I really wish I hadn’t. Because this pizza is SO good, and I’m going to want to eat it every time in New York! It’s from 2 Bros Pizzeria and its absolutely delightful.

The next day was our last and final full day in New York, so we set off for brunch at a place called Citizens of Chelsea. It didn’t appear to be a great day for weather as on our way the heavens opened and out came the rain, which wasn’t fab! For a Friday morning at 11:30ish, this place was absolutely packed out and we had to wait around twenty minutes before a table became available. Its a pretty popular place and I completely get why.

Boasting an excellent menu this Australian cafe located in Chelsea offers delightful brunch options and delicious coffee. I seriously struggled with what to chose before opting for the pulled pork benny. What arrived was slow cooked pulled pork, two poached eggs, chipotle hollandaise and scallions served on crispy smashed potato.  Because I was struggling to chose between that and avocado toast, I asked for a side of avocado too, as I knew I would be jealous when Grace and Chantelle’s avocado toast arrived.

The food, coffee and service was impeccable and so moderately priced too! I will definitely venture here again in New York as there’s so much more I want to try from their menu in this cute and quirky cafe.

Afterwards we then took the subway downtown to the Color Factory, however this plan went down like a lead balloon when we arrived at 1:30pm and they said the next available slot was 8:30pm… with the rain coming down it wasn’t looking great so we decided to head to a rooftop bar we’d been wanting to try out called Refinery which was also sheltered too. Sadly, when we got there, they were closed for an event, so we then walked all the way back to Chelsea to a rooftop called Gallow Green and on the way there the sun even managed to come out!

With the sun now shining down it was getting quite warm, so after a bottle of sparkling rosé we headed back to change before going to another rooftop bar called 230 Fifth, a favourite amongst crew and had been recommended to me by a few friends.

We were also meeting my friend Molly who I know from studying in Kansas. I hadn’t seen Molly since 2014 and she’d recently located to New York for work, so I couldn’t wait to catch up with her too. I mean, we had almost five years worth of stuff to catch up on and it’s so great to have another friend in New York too.

That evening we went to dinner at Tacombi which is a mexican restaurant known for its tacos and they have a few spots dotted around New York. Being a Friday evening, we had a long wait for a table, and we were SO hungry I didn’t even snap a picture which I regret. Cause it was really yummy, and we ordered numerous dishes to try. From here we met up with my friend Scott (who I usually always see when I’m in New York) for some more drinks in the West Village before I dragged myself in at 1:30am prior to a 5am wake up for our flight the next day. Not fun and not fresh. 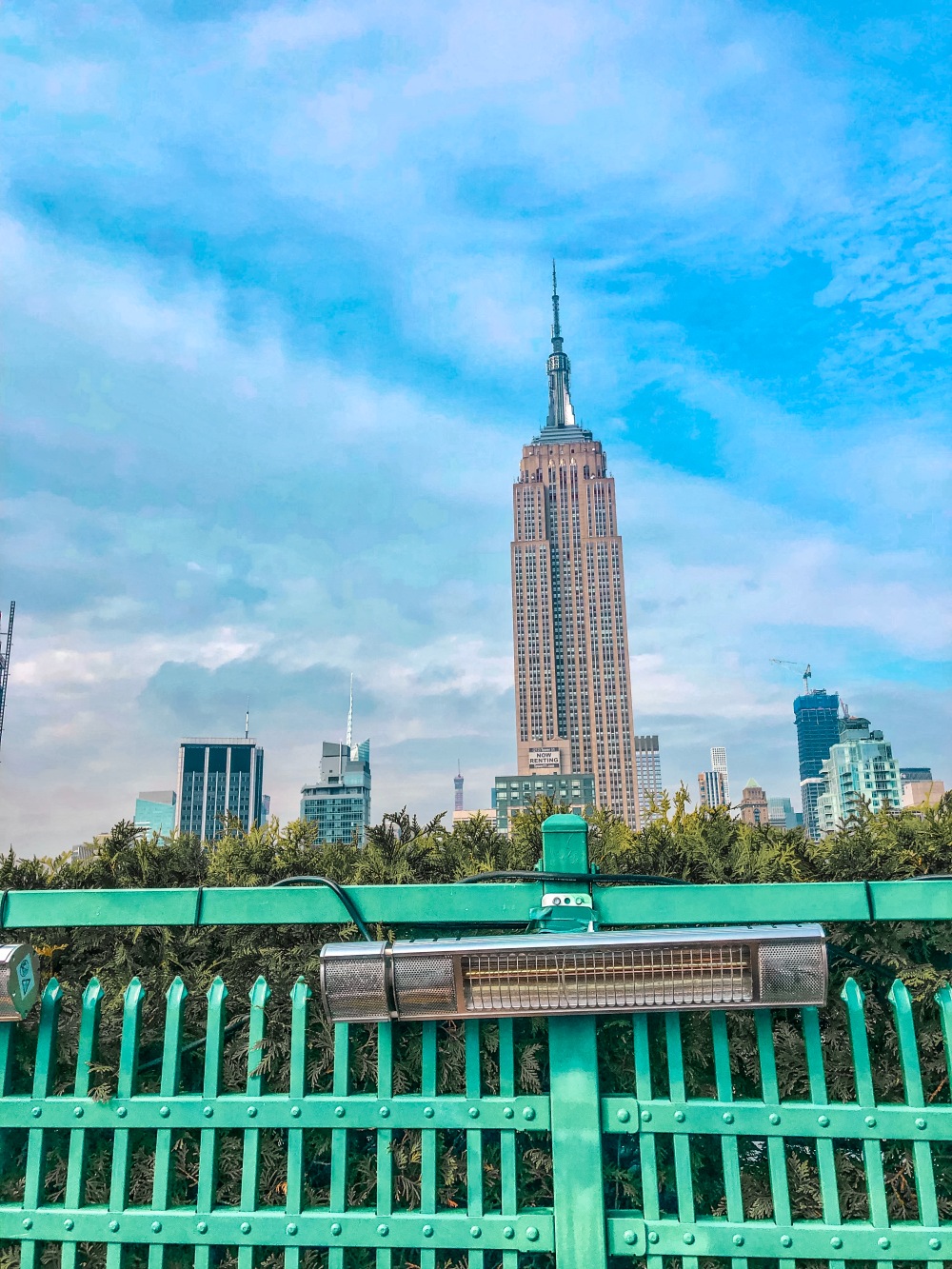 I had the most incredible time in New York, it was so lovely to be in a city I love with two of my best friends and also for more than twenty four hours! I got to try out so many places I’d wanted to and catch up with friends not stressing out about the lack of sleep I was probably going to get before operating a flight back to Dubai. New York is honestly one of the best places on earth, but I also forgot how expensive it is when you don’t have an allowance given to you to spend! If you still haven’t visited New York, definitely make it your next place to visit. As no matter what time of year you head to the city that never sleeps, there is always something to see and do for everyone of all ages. And no matter how many times I see this pop up on my roster, I don’t think I’ll ever tire of it.