An early morning departure from Dubai at 3:30am, and this time I was heading to Seoul in South Korea. A while since I last visited back in 2016, and I was excited to explore the city which I didn’t manage to do last time despite it being winter and VERY cold. We landed late afternoon and when we got to the hotel I arranged to meet a few of the crew downstairs for Korean barbecue. 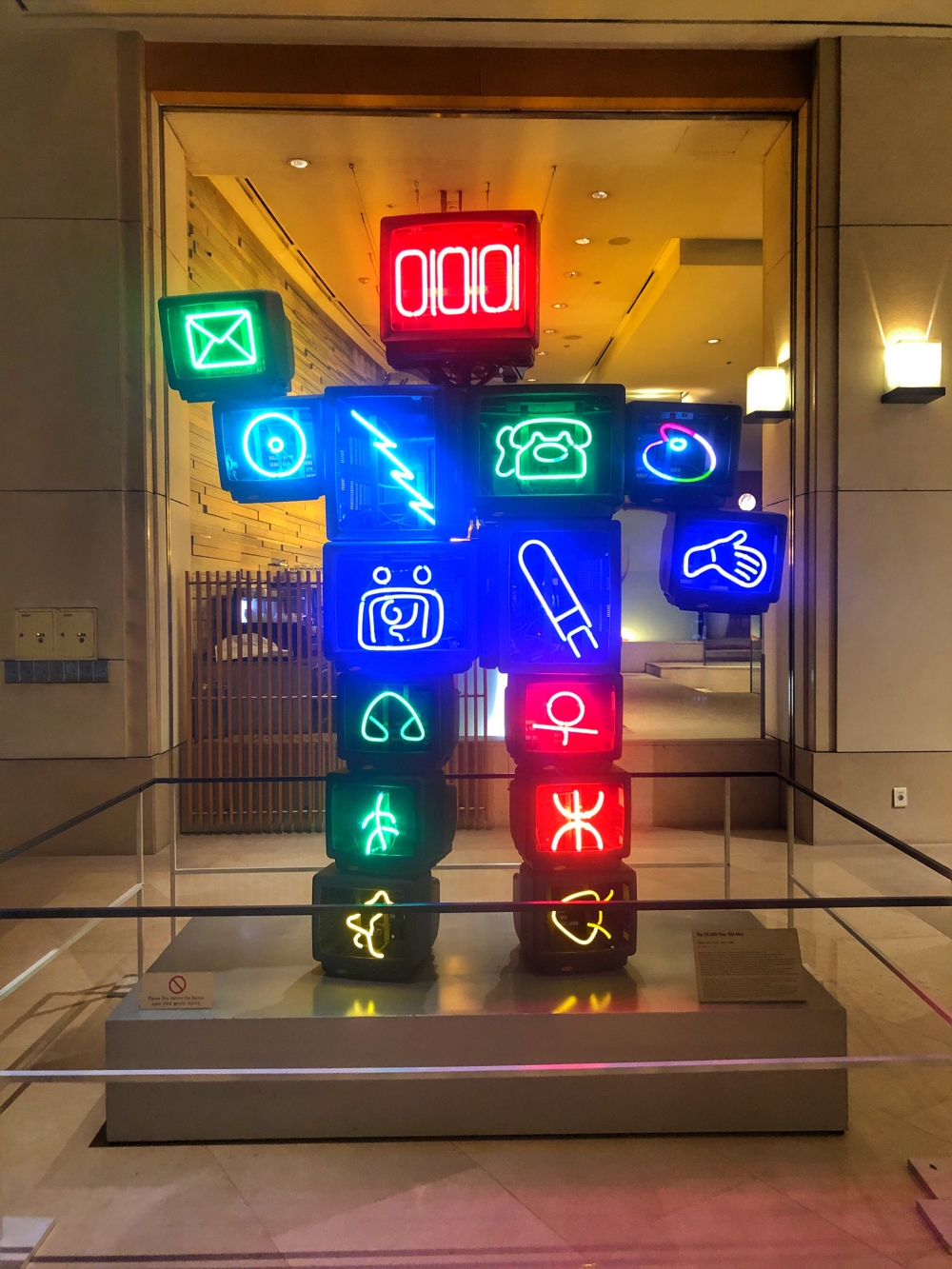 We braced the minus temperatures as we stepped outside into the cold and wandered up the street for ten minutes until we found the restaurant we had been recommended by the crew. All five of us piled round a table and ordered a few bottles of beer and soju (Korean wine) and decided on a couple of platters of meat.

The concept of Korean barbecue is that you are served unlimited multiple different side dishes and you order different plates of meat that you cook on barbecues in the middle of your tables yourself. We ordered a multitude of different meats and types of meat which were absolutely unbelievable, so much so, we kept ordering until we could eat no more. 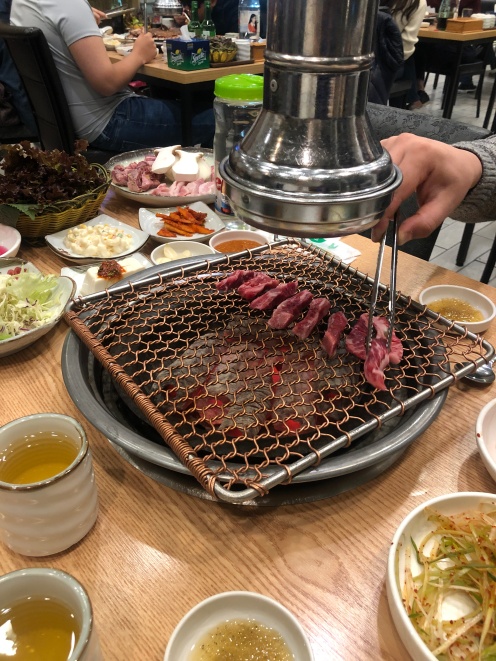 The food and drinks were so delicious and a couple of hours later and many plates and drinks later we were 35,000 won (£24) down each. Amazing food, amazing price. Feeling exhausted after a long day at work and early start and a stomach full of food, we wandered back to the hotel ready for a good nights sleep.

The next morning I met a couple of the crew downstairs to wander into the city. As I’d not seen much of the city before and the other two had not been to Seoul either, we jumped on the train in the direction of Gyeongbokgung which is the Grand Palace.

As we wandered through the main entrance into the forecourt of the palace, the artwork on the ceilings was incredible. The colours were so intense and bright against the gloomy cold morning sky and really brightened up the Palace!

When we stepped inside a barrier had been set up and people were beginning to crowd round, when music started playing and a procession of people came out in costume carrying flags and playing musical instruments. It was similar to a changing of the guards and was a good fifteen minute watch, even if we did begin to freeze up after a while being stood so still!

Ready to move around and warm up, we bought a ticket for 3,000 won to enter the palace and see what it was all about.

Gyeongbokgung continued to serve as the main palace of the Joseon dynasty until the premises were destroyed by fire during the Imjin War (1592–1598) and abandoned for two centuries. However, in the 19th century, all of the palace’s 7,700 rooms were later restored under the leadership of Prince Regent Heungseon during the reign of King Gojong. Some 500 buildings were restored on a site of over 40 hectares. The architectural principles of ancient Korea were incorporated into the tradition and appearance of the Joseon royal court.

In the early 20th century, much of the palace was systematically destroyed by Imperial Japan. Since then, the walled palace complex is gradually being restored to its original form. Today, the palace is arguably regarded as being the most beautiful and grandest of all five palaces. It also houses the National Palace Museum of Korea and the National Folk Museum within the premises of the complex. 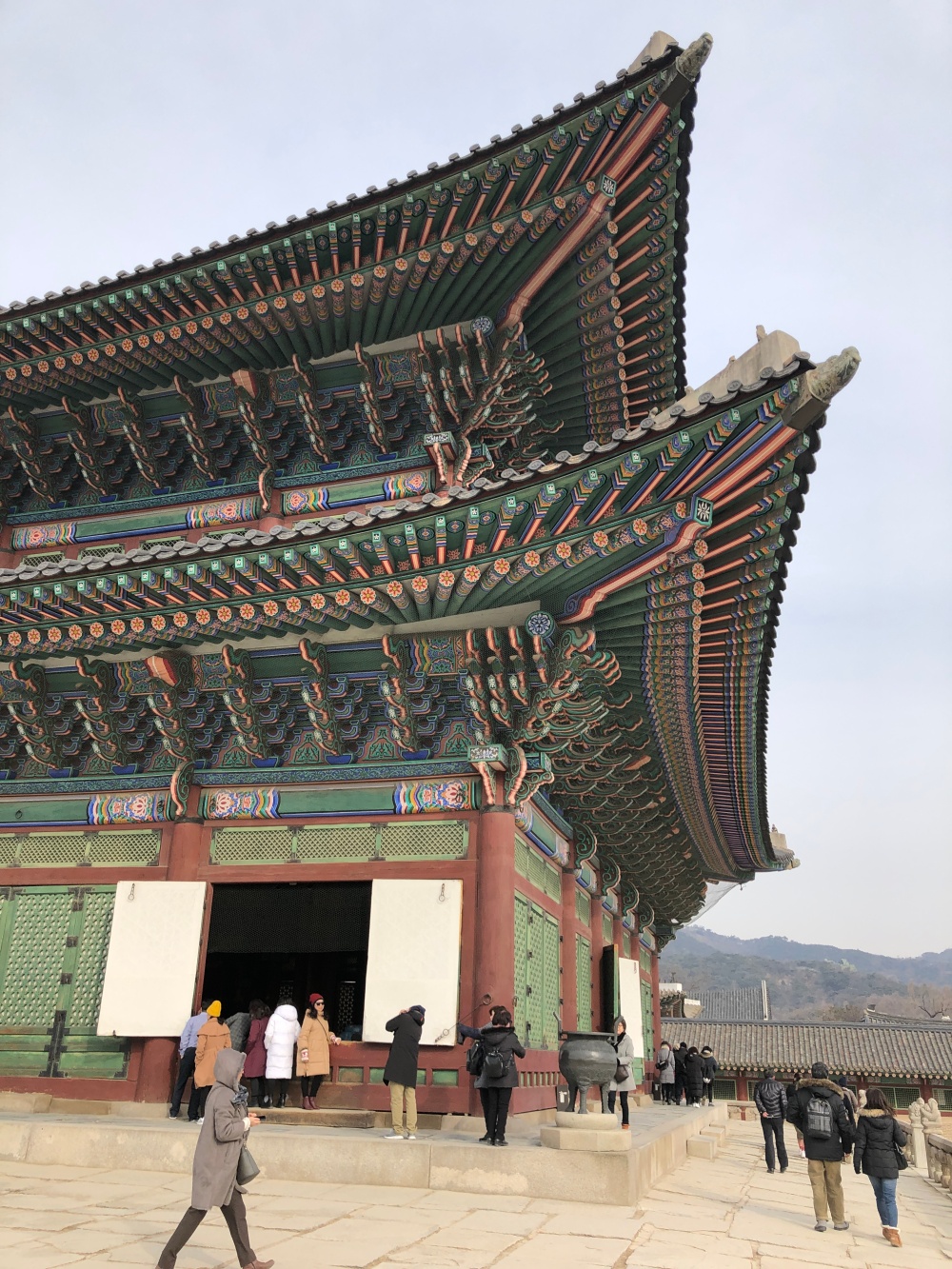 After forty five minutes of wandering we were SO cold, and we exited the palace and stopped at a coffee place where I had one of the best cups of hot tea I have EVER drank. And I seriously drink A LOT of tea. When we asked the server what was in the tea she said it was boiled and frothed milk, with two early grey tea bags dropped in and some special sauce. Unsure what the sauce was, but this tea was so sweet and delicious that we ordered a second one too. It really did the trick with warming us up before we went back out into the cold.

After this we were starting to feel hungry and we wandered back into the centre for lunch. We found a place called Tokyo Steak where we all ordered bowls of bibimbap which is a traditional Korean rice dish which we ate with sides of kimchi and miso soup. We were all so hungry we didn’t manage to take a picture, but the food was so good and we left feeling full up and sleepy ready for a nap before the flight. Not before stocking up on infamous Korean skin care… 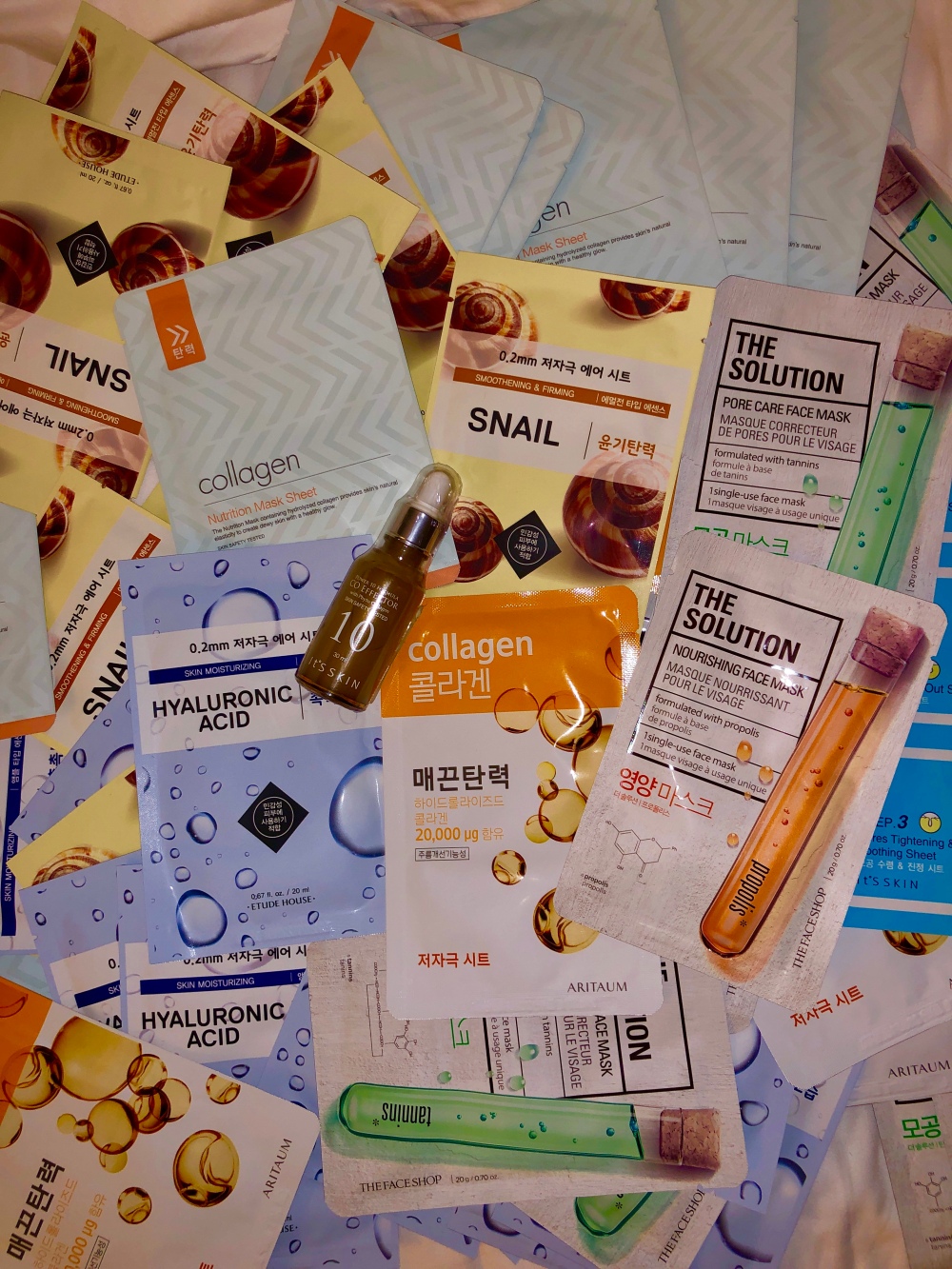 A power nap before the long ten hour night flight back to Dubai, and before I knew it was time to leave. An amazing layover with a great crew and I finally got to explore Seoul and stock up on 62 face masks. So if I suddenly start to look drastically younger and/or you don’t recognise me, it’s all thanks to the face masks!