As I previously mentioned in my February Roster I was given two back to back turn arounds to Muscat which I was trying to swap for ANY layover. As I always prefer getting to visit somewhere and the two short 45 minute flights didn’t rack up many flying hours. It honestly takes me longer to get to work than it does to fly the 214 miles to Muscat. I spent hours on the swaps page and sent out over 250 swaps!! When someone finally accepted for a flight to Durban in South Africa which I was very pleasantly surprised at.

Departing Dubai at 10:35am it was 8 hours and 30 minutes over to King Shaka International Airport in Durban. Landing early evening, we made our way over to the hotel and a few of us had arranged to meet for dinner.

We had wanted to go to a place called Ocean Basket that I had never tried before but all the crew were raving about, except when we got there, it had closed down just a few days earlier which was a little disheartening! With plenty of options on our doorstep, we opted for Cape Town Fish Market which I had last visited when I was in Dar Es Salaam and ordered a glass of South African red whilst we looked through the menu. I went for the creamy garlic mussels to start with and then had grilled shrimps and calamari for main which was heavenly. 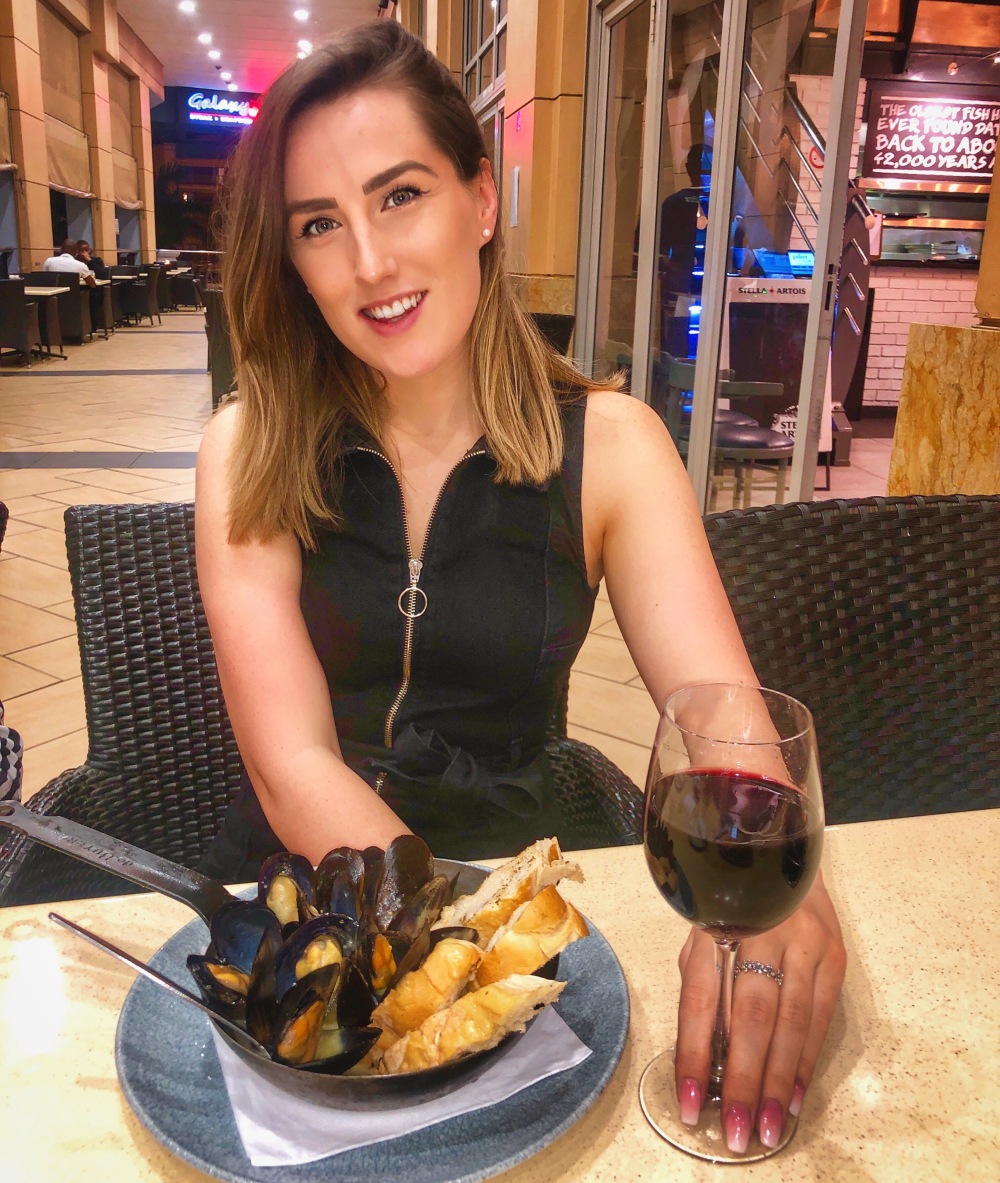 After dinner I made my way to bed after a long flight, ready for an early start the next day. Myself and one of the other girls, Charley, had arranged to go horse riding the next morning. I had seen on our layover tips facebook page a fellow crew member post about this a while back and thought this was something different to do whilst in Durban!

We met in the lobby at 08:30 and took an Uber across town to Giba Gorge which took around forty minutes. This place was genuinely in the middle of nowhere and we were a little concerned at how we were going to make it back or have an Uber get back to us. Our driver said he would wait for us and leave the metre running which only added on 0.70cents per minute so we knew we’d be able to get back to the hotel in time for our wake up call, which were incredibly grateful for.

We were given helmets, and myself chaps as I wasn’t wearing long trousers in the warm summer sun and taken over to the paddock and introduced to our horses. I would be riding Shamrock and Charley would be on Gambit.

Saddling up we were joined by another group of four and we ventured out into the gorge with the destination of the waterfall. It was just over an hours trek and we were treated to the most spectacular views with all different hues of green contrasting to the dusty burnt orange dirt tracks that we were following.

I hadn’t been horse riding in a long time and I was left to my own devices with Shamrock as we wandered along. It seemed that Shamrock was very hungry though as at every given opportunity he would be grabbing leaves from the side as he trotted along the paths. 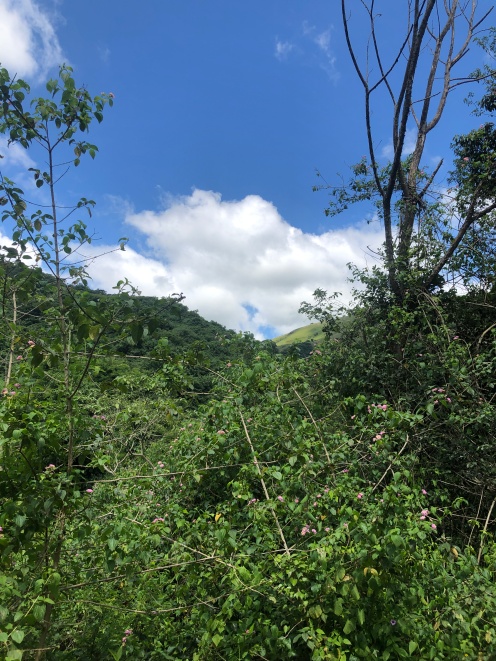 We waded through the river and after this we pulled out into the most beautiful open space boasting a lake filled with ducks against the backdrop of the undulating lush green mountains. With the sun shining down it was like a piece of paradise.

We moved around the lake and here we would stop for a short break and to visit the waterfall, not before we tried to take a picture of the pair of us on the horses, which proved quite difficult. 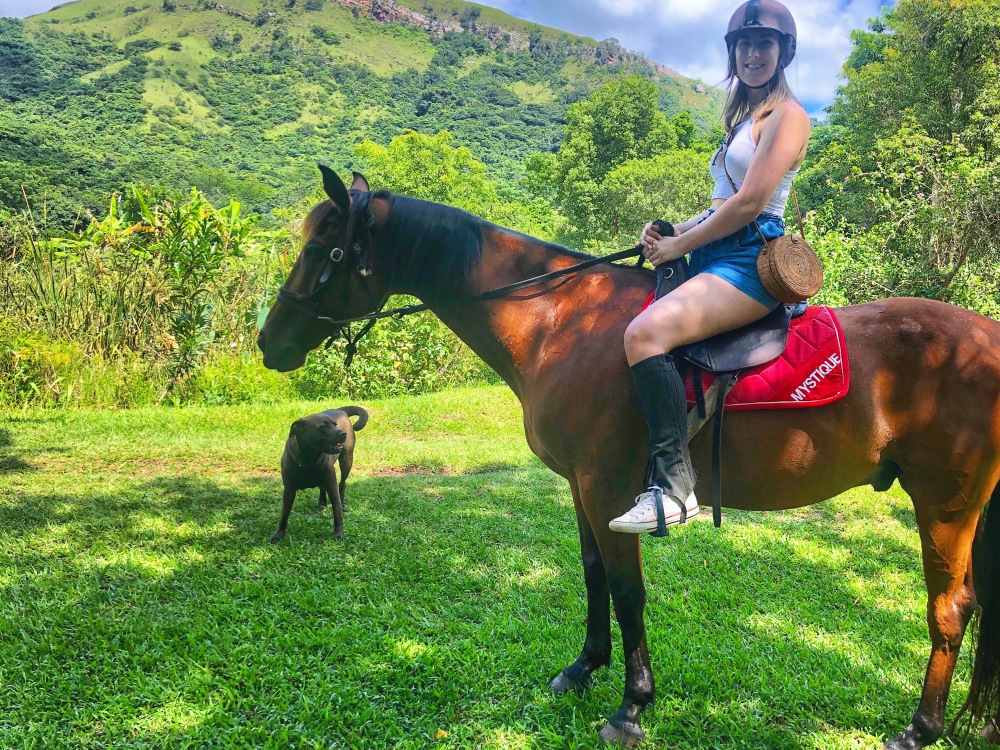 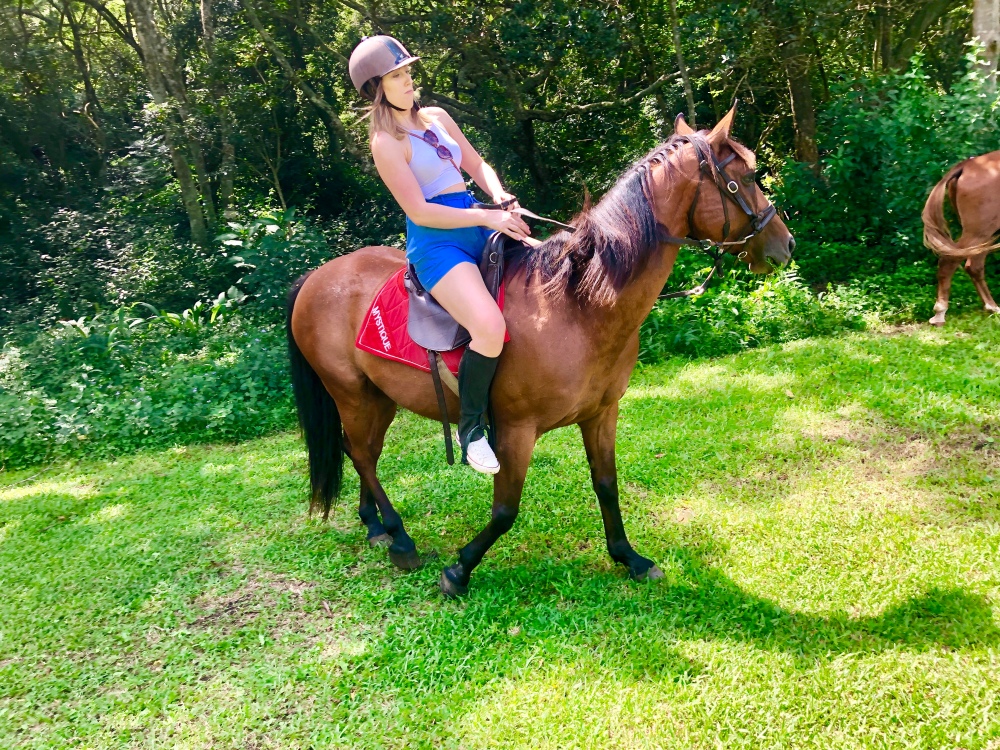 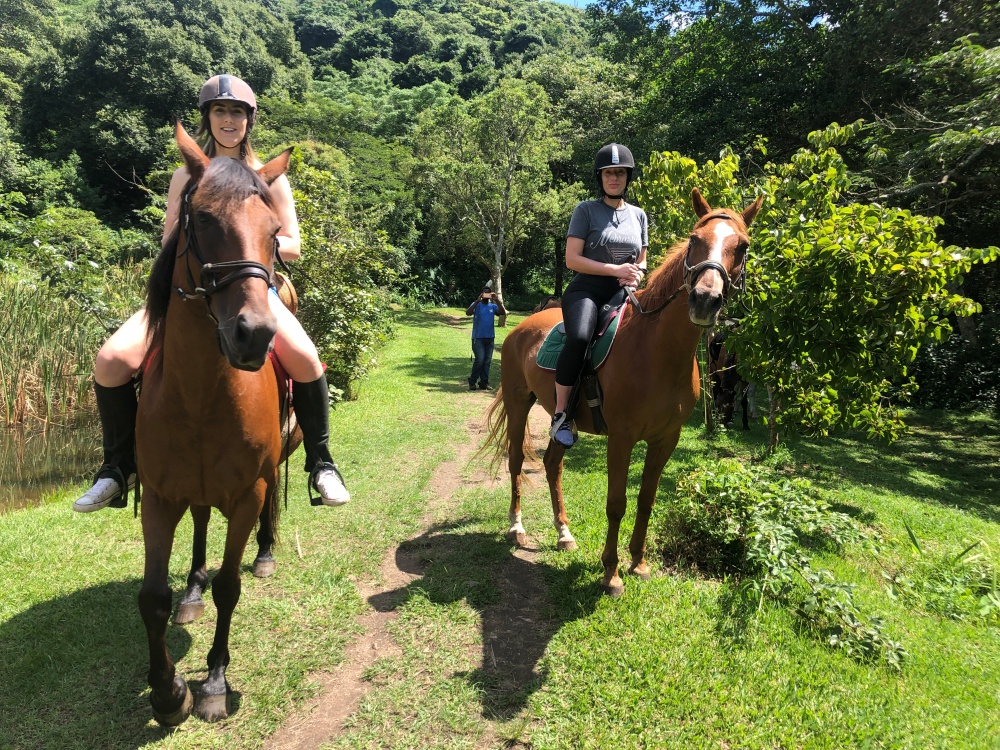 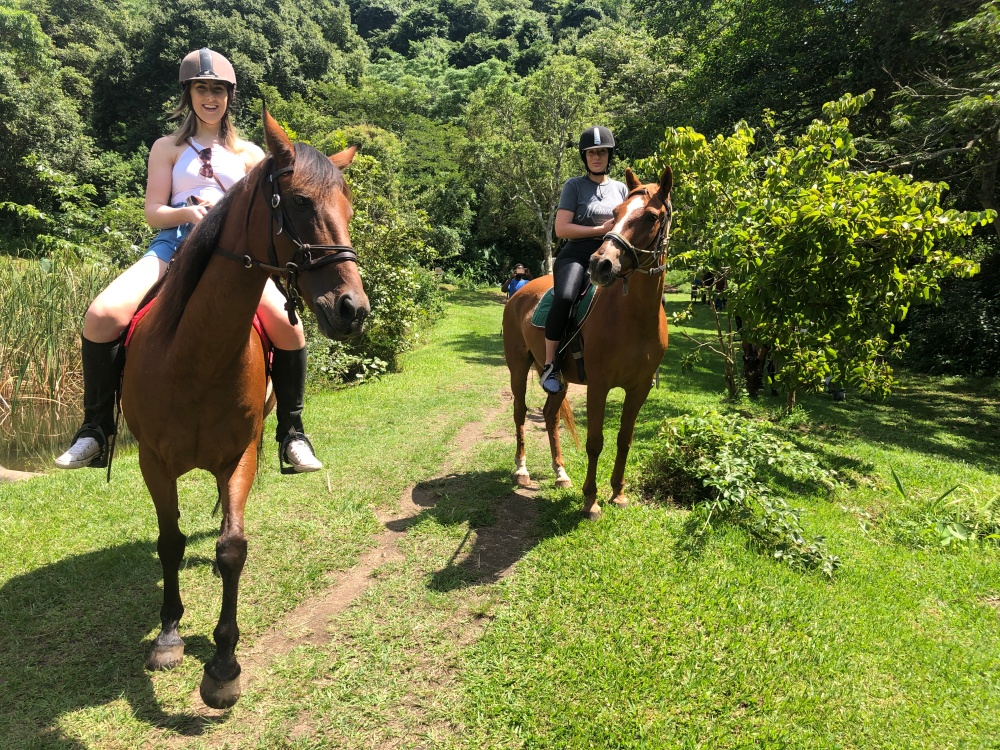 The live photos of these on my phone were very funny, so after a poor attempt at pictures, we dismounted and wandered up and over to the waterfall. 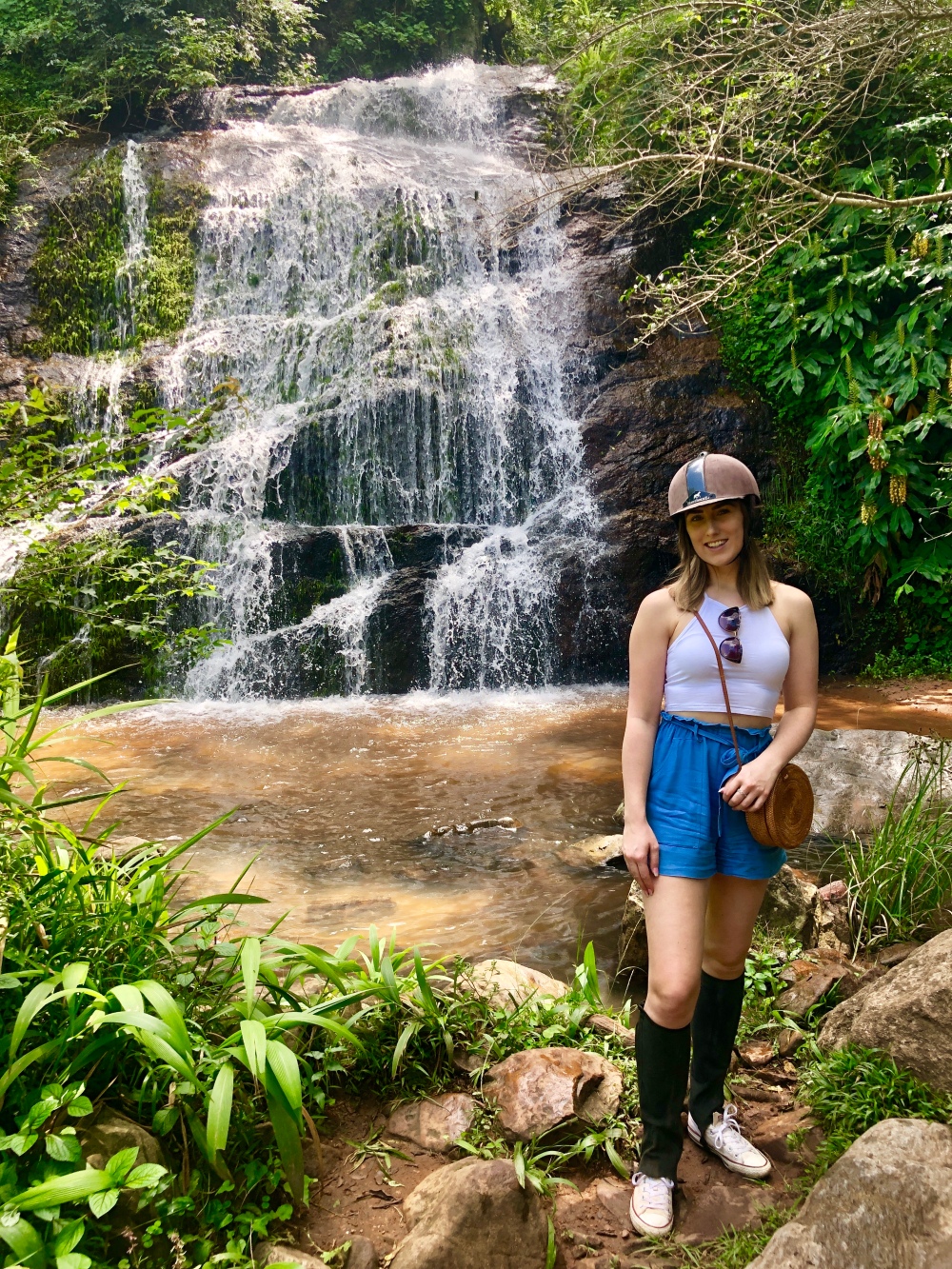 Time to get back on the horses and begin the trek back to the paddock, I enjoyed this so much! It made me want to do more horse riding in the future, its a great way to see somewhere and was something so different for a Durban layover which none of the crew knew about!

When we got back to the hotel, I took a stroll to find a lunch stop as I’d not eaten since dinner last night and called at Tasha’s which is a South African favourite of mine. I went for the Persian breakfast with added bacon and a banana smoothie which was just amazing. I left feeling super full and wandered back to the hotel to nap for a few hours before the long night flight back to Dubai. 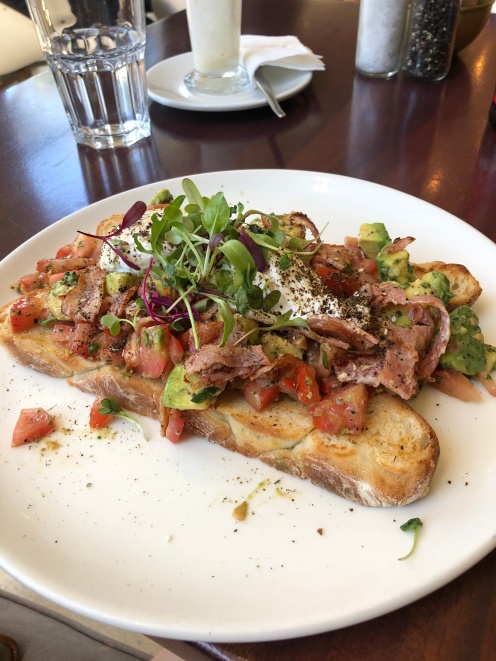 A really fun layover with a great crew, I really recommend Giba Gorge Horse Trails for any crew or anyone visiting Durban. Booking is essential, so if anyone wants to book just email swallowfarm@hotmail.com and it costs 350 rand for an hours trek.