A trip I’d been wanting for a long time, and I was happy to see Fort Lauderdale pop up on my roster. Our layovers here are between two and a half days to five days long, but we’d been placed on an extra flight and were only getting 33 hours here sadly. When the pilots came into briefing to give us our flight details, they said the flight time today will be exactly half of our layover, to which we all gave a very sad laugh to and then we began the long journey over to Florida from Dubai.

Landing into Fort Lauderdale Hollywood International Airport at 9am, we made our way across to the hotel, checked in and six of us agreed to meet downstairs in an hour to go out and explore Miami. 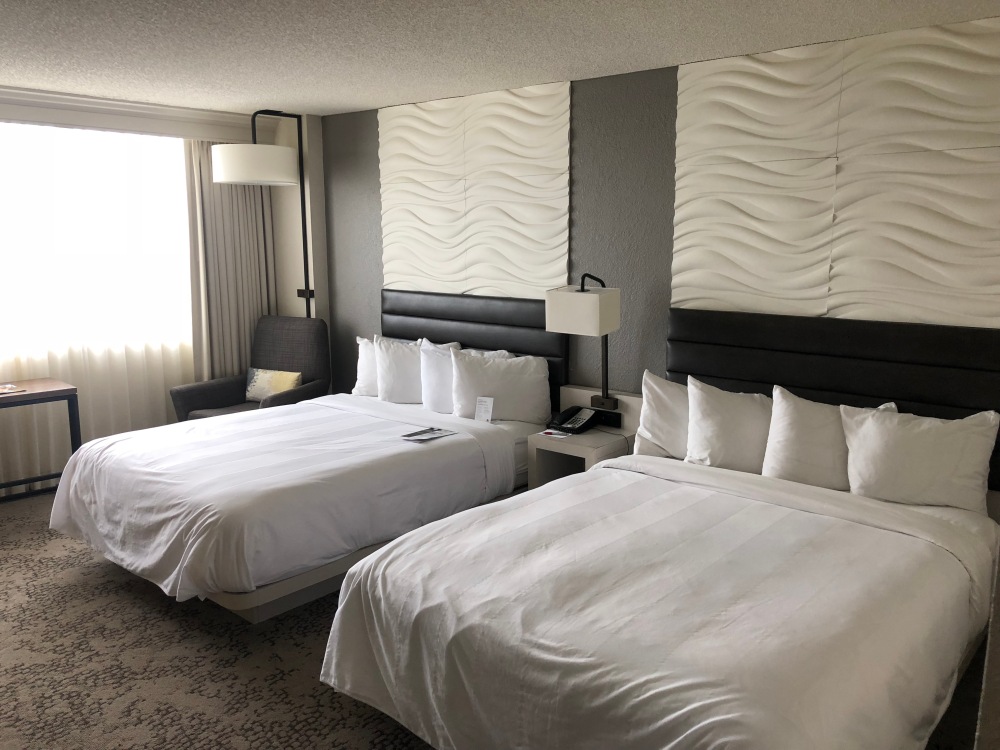 The six of us jumped in an Uber and headed to our first stop of the day, Wynwood Walls. Wynwood is a neighborhood in Miami, Florida. Wynwood is best known for being a prominent entertainment district, dotted with artwork, restaurants, breweries, clothing stores, dance venues, among other retail options. Formerly an industrial district, the area is highlighted by colourful murals that cover the walls of many of the buildings. It is north of Downtown Miami and Overtown, and adjacent to Edgewater. Wynwood has two major sub-districts, the Wynwood Art District in northern Wynwood, and the Wynwood Fashion District along West 5th Avenue.

Launched during Art Basel in 2009, what began as a few commissioned murals to beautify the area has morphed into the city’s only outdoor street art park, featuring more than 40 murals. Some of the world’s most acclaimed artists and muralists have contributed over the years, including Shepard Fairey, Ryan McGuinness, Kenny Scharf, How and Nosm, Faile, Retna, the Date Farmers and Liqen. The best part? Admission is free.

There are really no concepts in Miami that can compare to the Wynwood Walls. It is sort of a walkable outdoor museum, where entire buildings have replaced the usual gallery canvas. The works are impressive in their scale and are reflective of the spunky personality that put Wynwood on the map as Miami’s art district. Certain murals have remained the same over the years, but usually—around December for Art Basel—new murals pop up in a matter of days.

We strolled around the district and the murals for a short while, taking in each of the pieces in the glorious sunshine in the sunshine state, trying to depict in some pieces what the artist was trying to portray (see above) and appreciating each of the artistic murals in their grand scale. I would have loved to have spent more time in and around the district as there were numerous cute and quirky cafes and bars dotted around.

Following on from here, we went across to Ocean Drive. Ocean Drive is mostly known for its Art Deco hotels, many of which have been prominently featured in countless media. Among the most popular is the Colony Hotel, known as the most photographed art deco hotel, a 1939 boutique-inspired hotel that has made cameo appearances in scores of movies and TV shows including Dexter. The Sunray Apartments were featured in the movie Scarface (1983) and the Carlyle Hotel served as the exterior for the Birdcage drag club in the 1996 comedy The Birdcage. The 2002 video game, Grand Theft Auto: Vice City also based the look of it’s eponymous city off Miami and has a replica of Ocean Drive with exactly the same name. Ocean Drive is also the location of the famed Casa Casuarina, the residence of Italian fashion designer Gianni Versace (now a boutique hotel), one of the most photographed houses in North America. Another popular art deco hotel is Clevelander Hotel, aside from its hotel services, it consists of an indoor sports lounge as well a dance floor and pool area on the ground floor and a complimentary roof-top lounge.

As we arrived, we walked out to the long road of Ocean Drive adjacent to the ocean lined with palm trees and the beach on one side, and a never ending row of restaurants, hotels and bars along the sea front. Expensive cars such as Ferraris and Lamborghinis drove up and down Ocean Drive, and we were approached by numerous wait staff trying to get all six of us to take a seat in their restaurant.  We stopped at one place that coaxed us in with happy hour, and two of the girls went to the beach whilst the rest of us grabbed a jumbo margarita and scoured the menu. 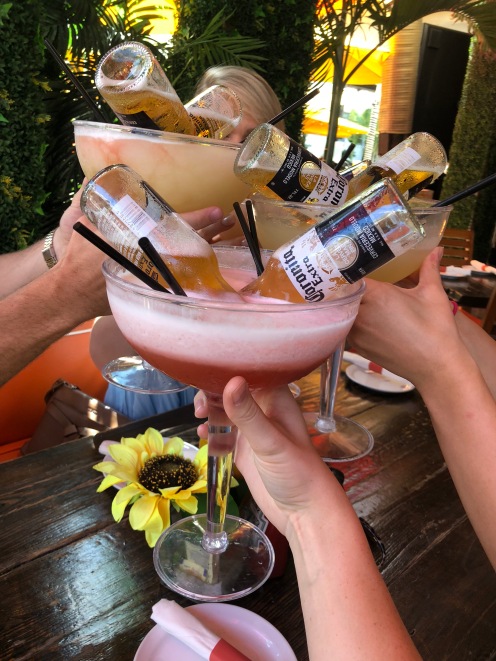 We all opted for Mexican and I ordered the chicken fajitas which were so good, and we sat chatting away and watching the numerous amount of people walking up and down Ocean Drive in their equally interesting outfits. 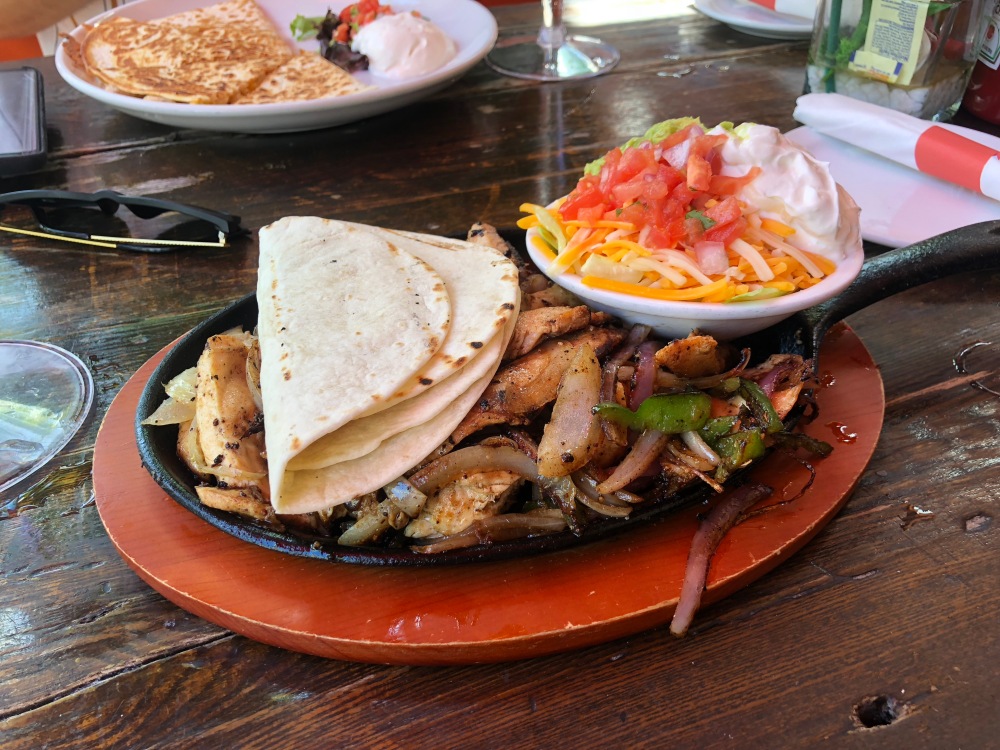 Opposite the restaurant was a famous and “iconic” land mark of Miami, so I was told. I’d never seen this before, but it was a small wall showing the date and the temperature and above that it read ‘Miami Beach’. A few of the crew were impressed by this, but having never seen it before I didn’t quite get all the fuss. But there was always a small queue of tourists waiting to get there picture with it! So of course, I obliged.

Time for a nice leisurely stroll along the infamous South Beach, they had so many of these cute life guard huts all decorated so differently, not that I saw many life guards on duty to say how busy the beach was!

We wandered around the town, and considered going to a beach club at SLS, but we were all feeling pretty exhausted after the long flight and then powering on through the day, so we called it a day and after a while we stopped at Sugar Factory for some desert before we took an Uber back to the hotel again.

A brilliant sunny day seeing what South Beach and Ocean Drive had to offer. I would love to come back to Fort Lauderdale again, especially for the longer trip so I can see more of both Miami and also Fort Lauderdale, and not be completely exhausted with jet lag. I look forward to seeing it on my roster in the future!