Something I had wanted to tick off my bucket list for a while was to visit Munich during Oktoberfest, and I finally managed to visit this year! We departed Dubai at 16:30 and it was a lovely 5 hours 50 minutes over to Flughafen München.

Landing around 9pm, we checked in but half the rooms weren’t ready so I changed in the toilet so that I could grab dinner and drinks with some of the crew and waited for the room to be ready. Perks of the room not being ready resulted in a free dinner and drink and I ate roast pork with gravy, dumplings and sauerkraut with bacon washed down with a well deserved stein. When in Germeny, right? 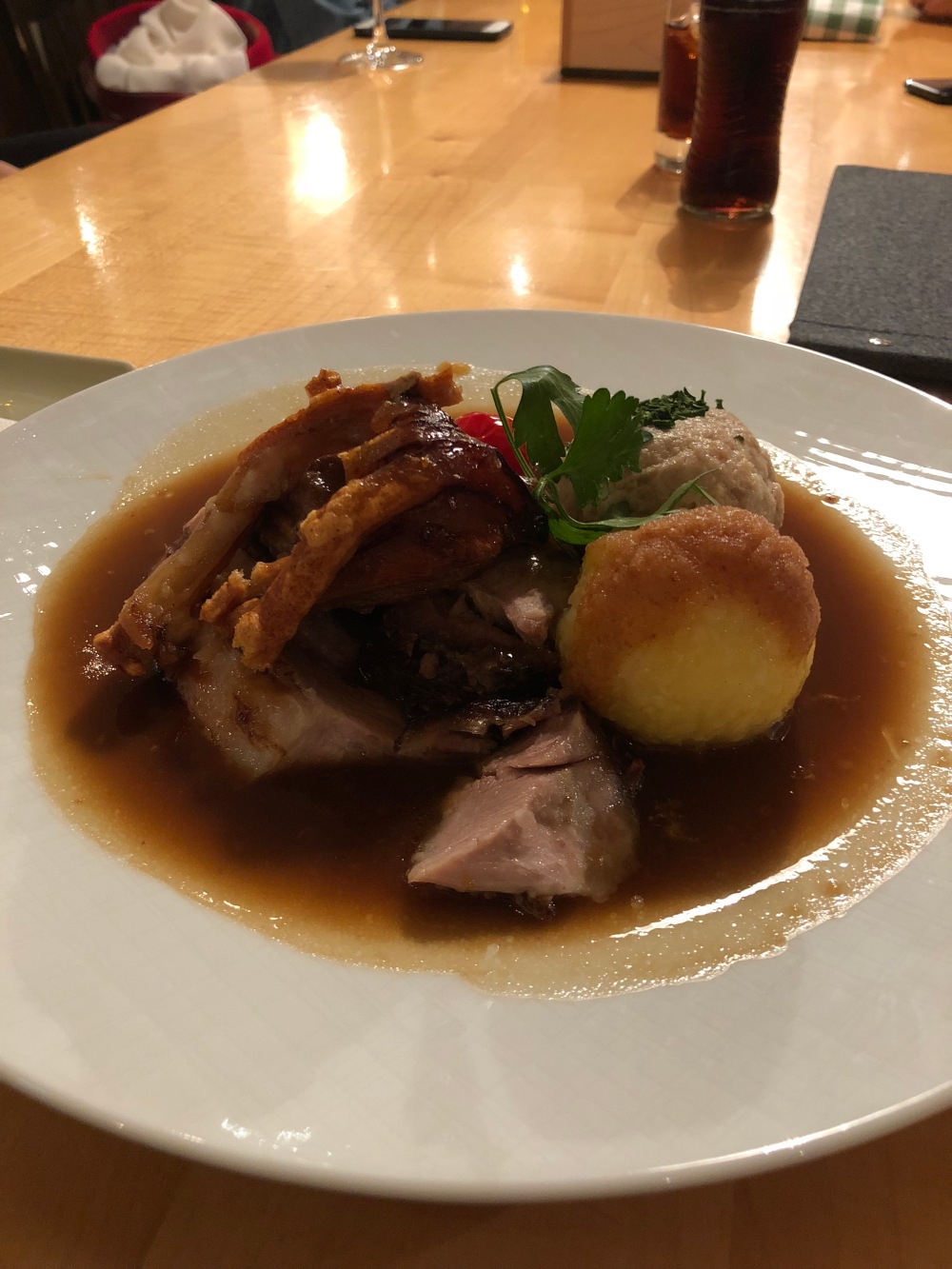 Followed by a few drinks in the bar later, I then went up to bed ready to explore Oktoberfest in the morning.

Waking up at 9:30, I met a few of the crew downstairs in the lobby so we could head into the city to buy outfits, before going across to Oktoberfest. I’d been told there were numerous cheaper stores where we could buy the traditional dress, without having to pay the €300 the shop in the hotel was trying to charge. 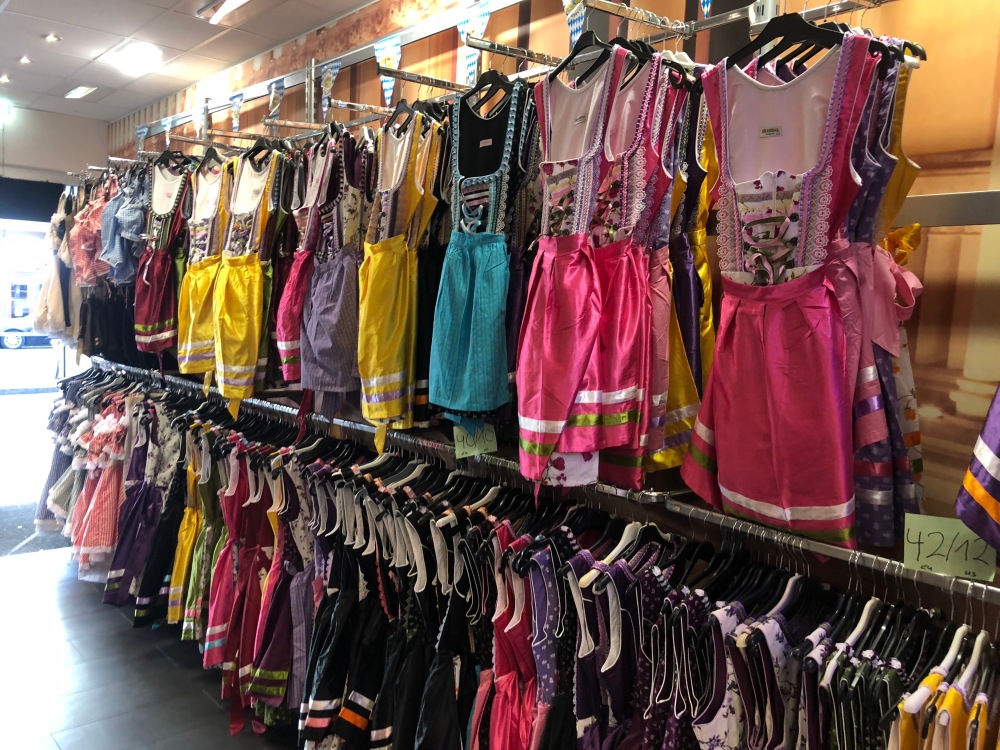 We jumped on the train into the city and exited at Odeonplatz, we passed a pop up store which we wandered into as they had pretty cheap outfits and I managed to get a dirndl (dress), apron, blouse, socks and a headband for €60! All dressed up and ready to go, we walked across to Oktoberfest. Interesting fact, at which side you tie your bow reveals your relationship status! Left is single, right is taken, children tie in the centre and if you’re widowed you tie it at the back! 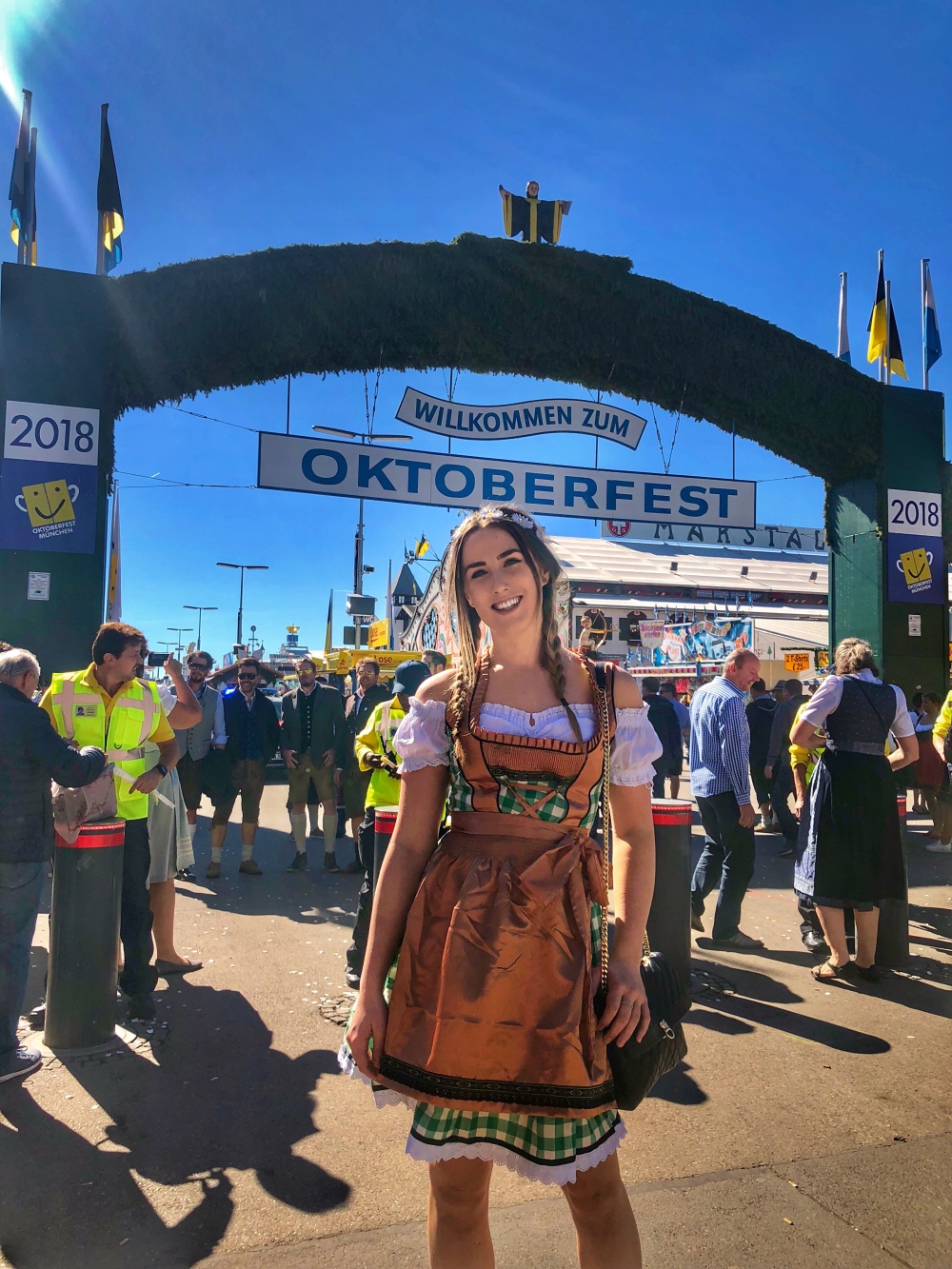 Oktoberfest is the world’s largest Volksfest (beer festival and travelling funfair). Held annually in Munich, Bavaria, Germany, it is a 16- to 18-day folk festival running from mid or late September to the first weekend in October, with more than six million people from around the world attending the event every year. Locally, it is often called the Wiesn, after the colloquial name for the fairgrounds, Theresa’s meadows (Theresienwiese). The Oktoberfest is an important part of Bavarian culture, having been held since the year 1810. Other cities across the world also hold Oktoberfest celebrations that are modeled after the original Munich event. 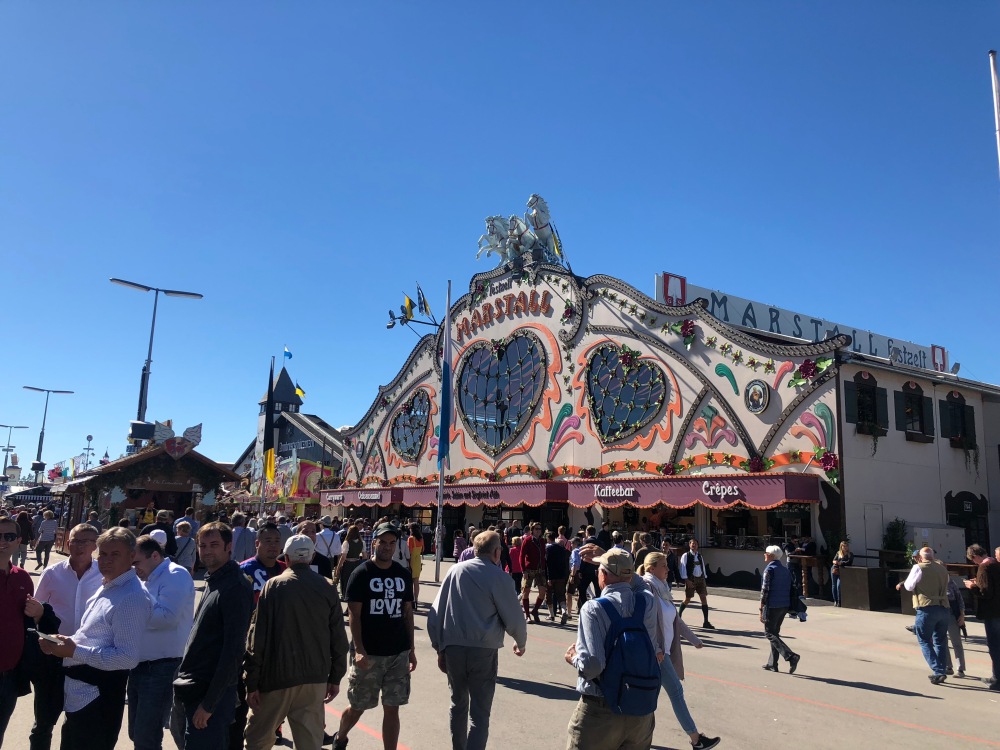 During the event, large quantities of Oktoberfest Beer are consumed: during the 16-day festival in 2013, for example, 7.7 million litres were served. Visitors also enjoy numerous attractions, such as amusement rides, side stalls, and games. There is also a wide variety of traditional foods available. 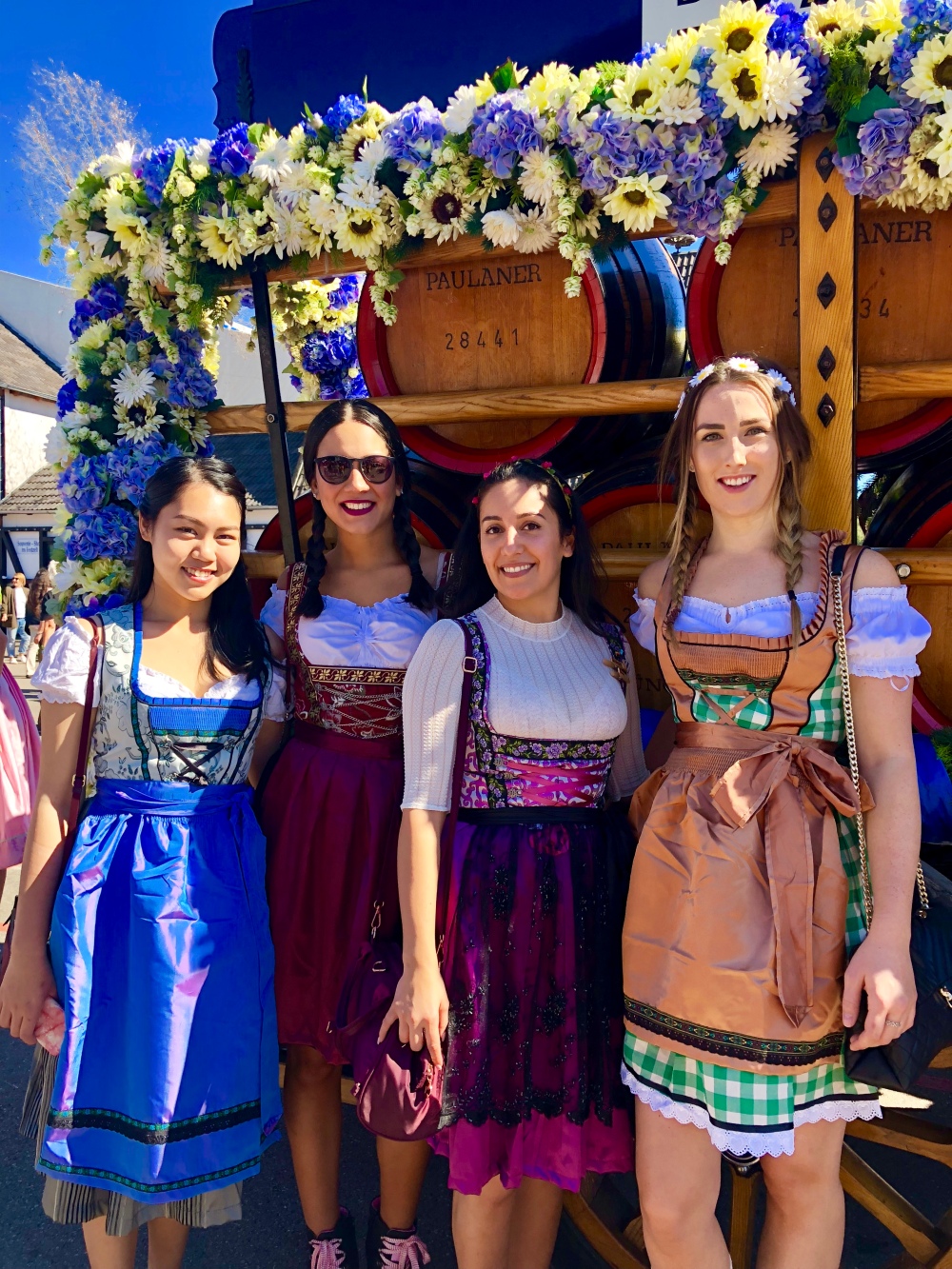 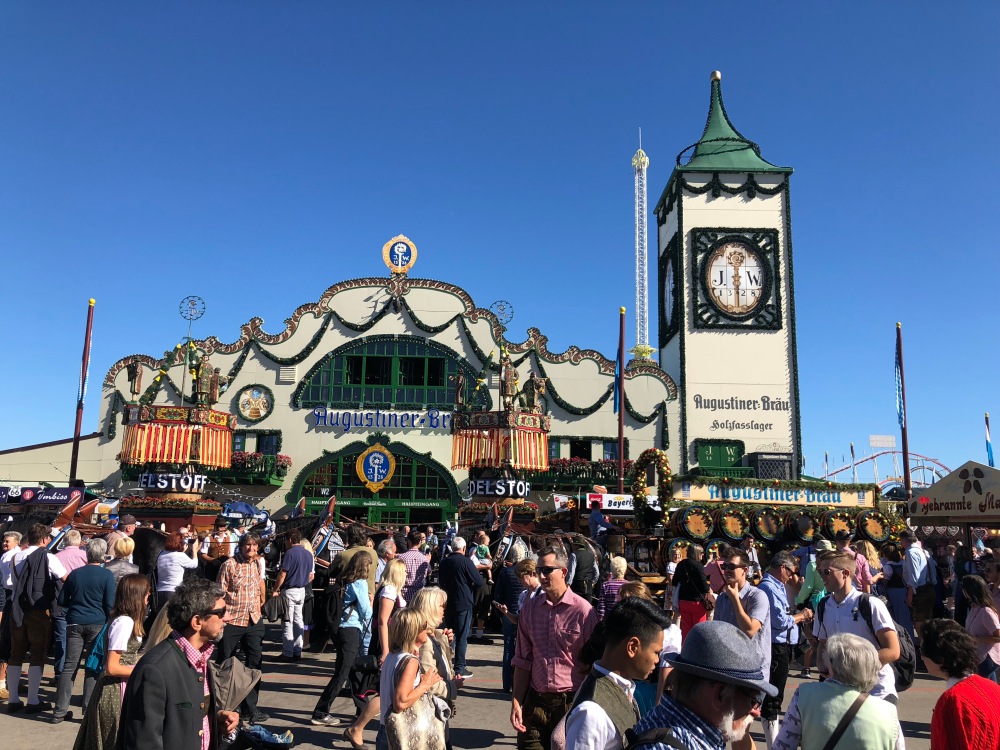 With the weather being perfect, it was absolutely packed out with both residents and tourists soaking up the last of the summer sun and fully immersing themselves in the local culture.

We made our way into one of the tents which was absolutely packed out with people. To say it was 12 o’clock, there were steins EVERYWHERE. What I didn’t realise was that you had to be seated to be served your drink, and by the time we started wandering round the benches, we were struggling to get us all seated.

So we went into the next tent, where we managed to find a spare bench which we all piled around and ordered non alcoholic steins, as sadly we were flying later that evening and couldn’t drink. 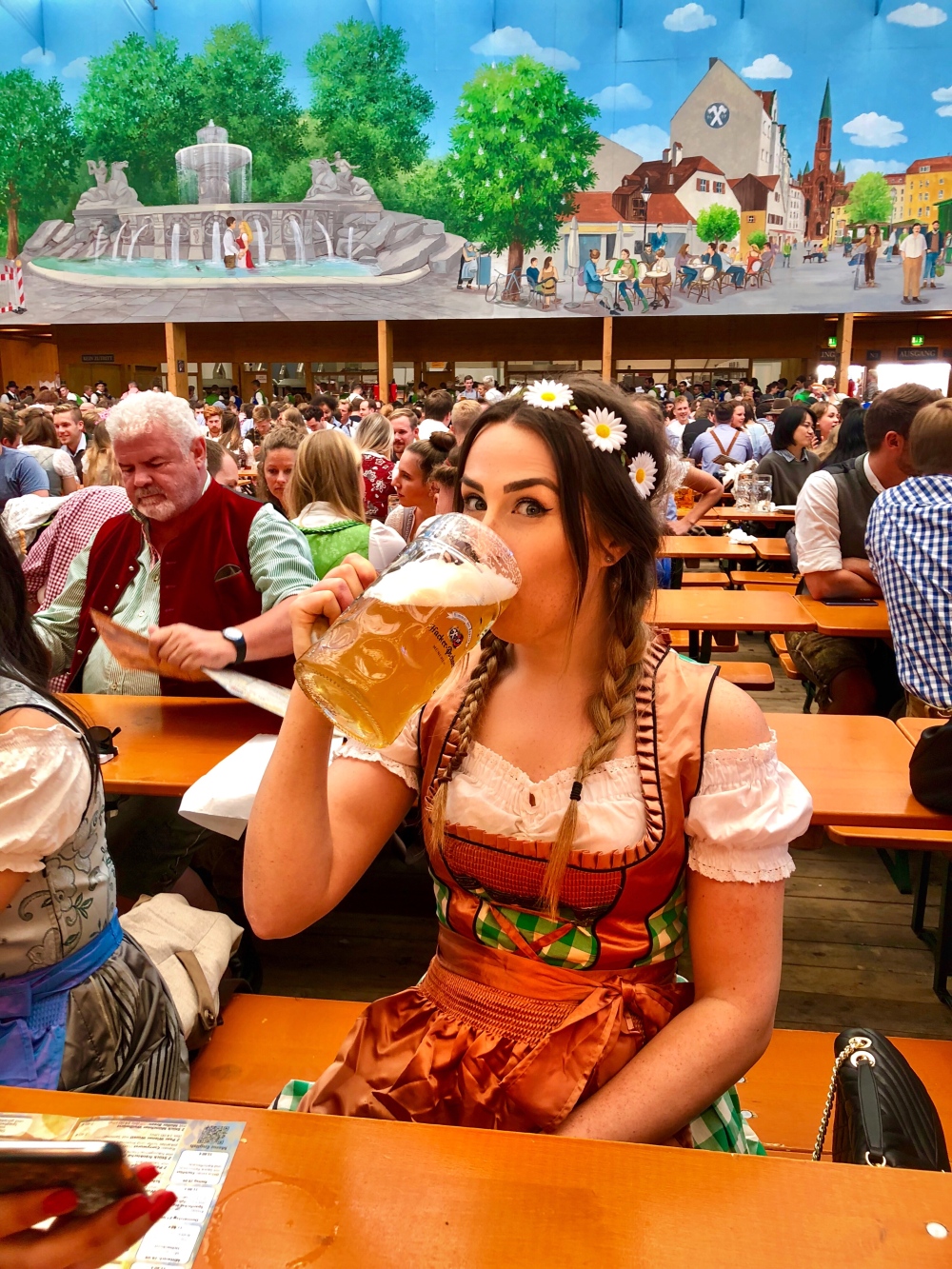 The atmosphere was amazing with the live bland playing traditional music which everyone gets involved with, they would raise the steins and cheers to everyone in their immediate vicinity and shout “prost!” (cheers in German).

The servers, would carry numerous steins at once, I don’t know they do it, but we saw one guy carrying ten one litre steins at once! Imagine if you dropped them all?! They must be so heavy too! 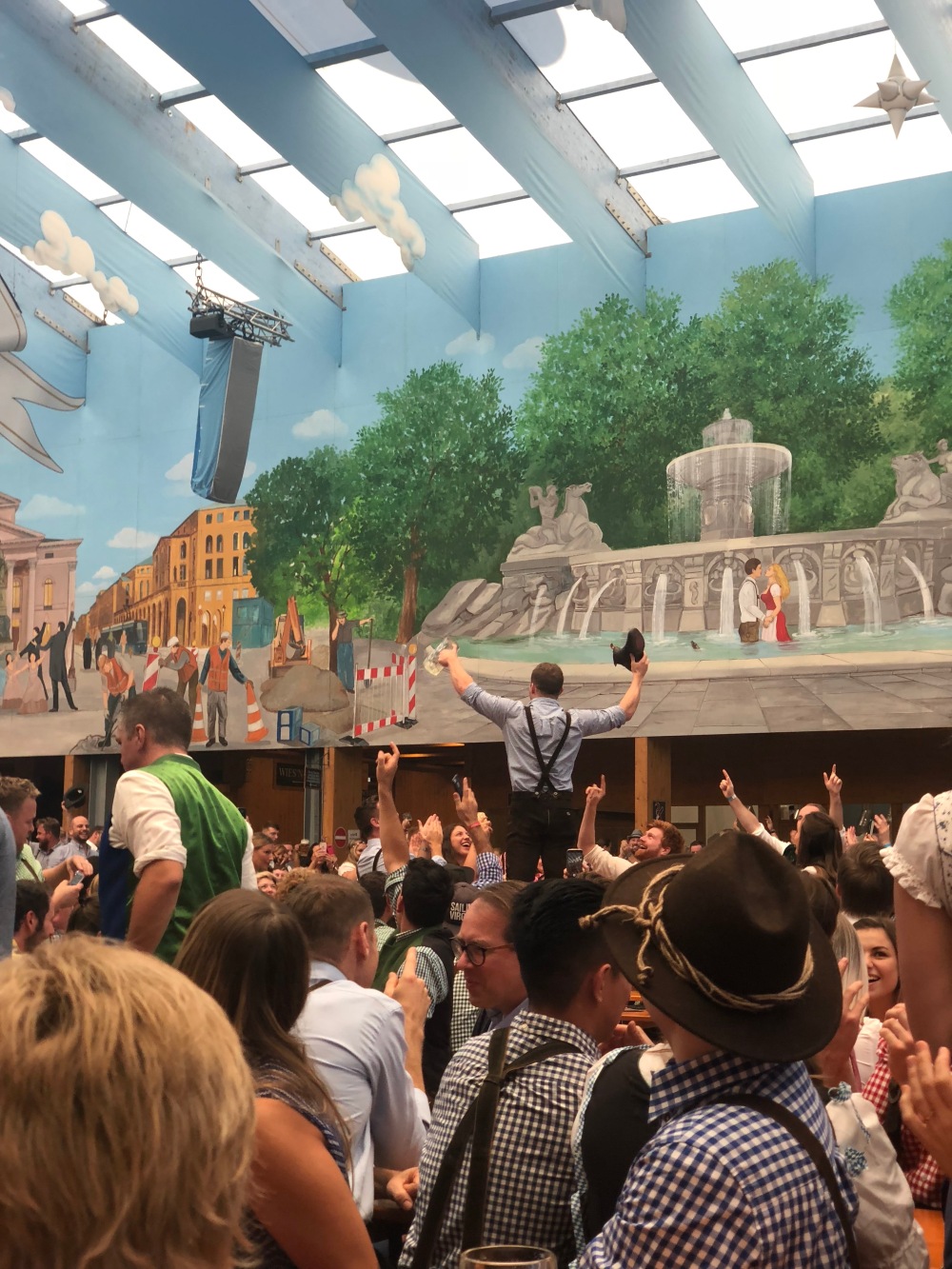 At one point, a guy stood up on the table, poured his stein into his boot and downed it in front of everyone whilst everyone in the tent cheered him on. Everyone was just having so much fun, and I wished my layover was a little longer so I could have enjoyed a few steins myself! 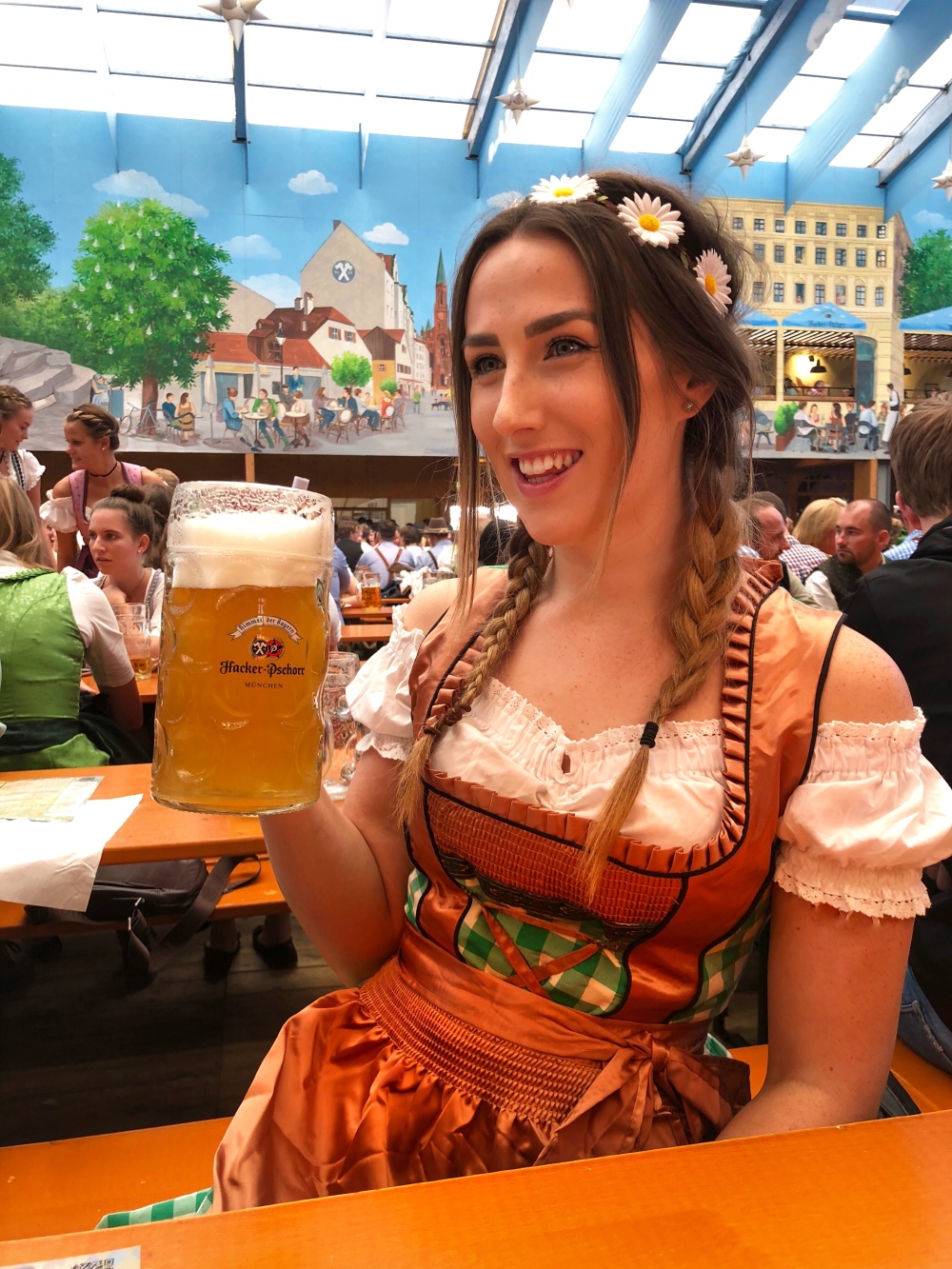 Feeling pretty peckish now, we left the tent and I grabbed a pulled pork sandwich and then stopped for a crepe with lemon and sugar. 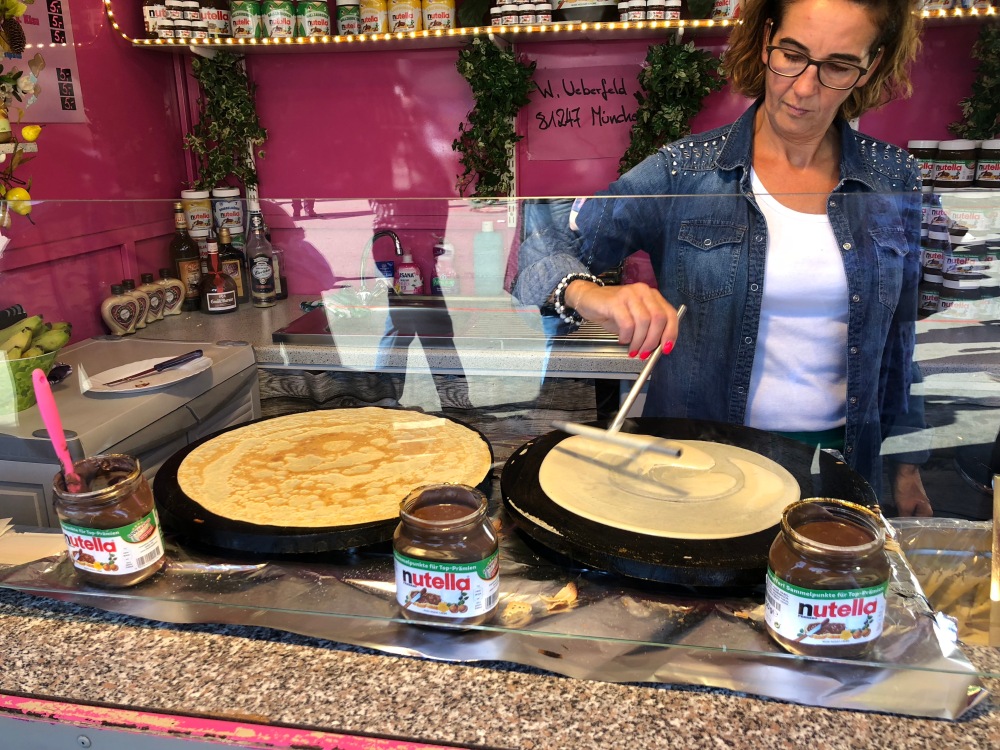 Not having very much sleep the night before, I decided it was time to head back to the hotel and nap before our night flight back to Dubai.

I was then back to Munich three days later and went for some more bavarian food and drinks when we landed! 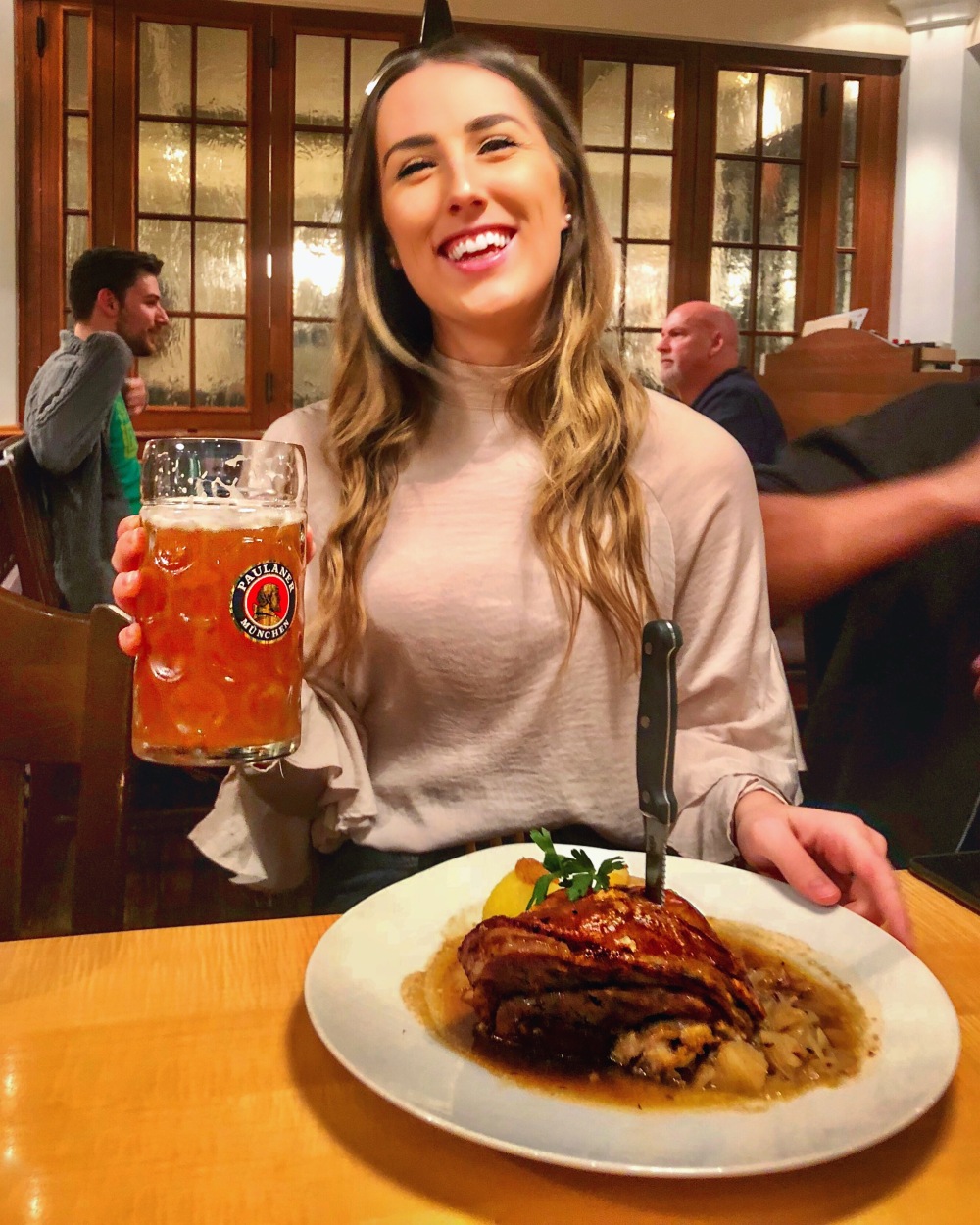 The forecast wasn’t great for the trip, and we experienced some heavy downpours. With bad weather and bad timings, the crew weren’t keen to do very much. So after a couple hours, I went to bed and had arranged to meet one of my friends, Simon, from my time in Kansas for lunch in the city. 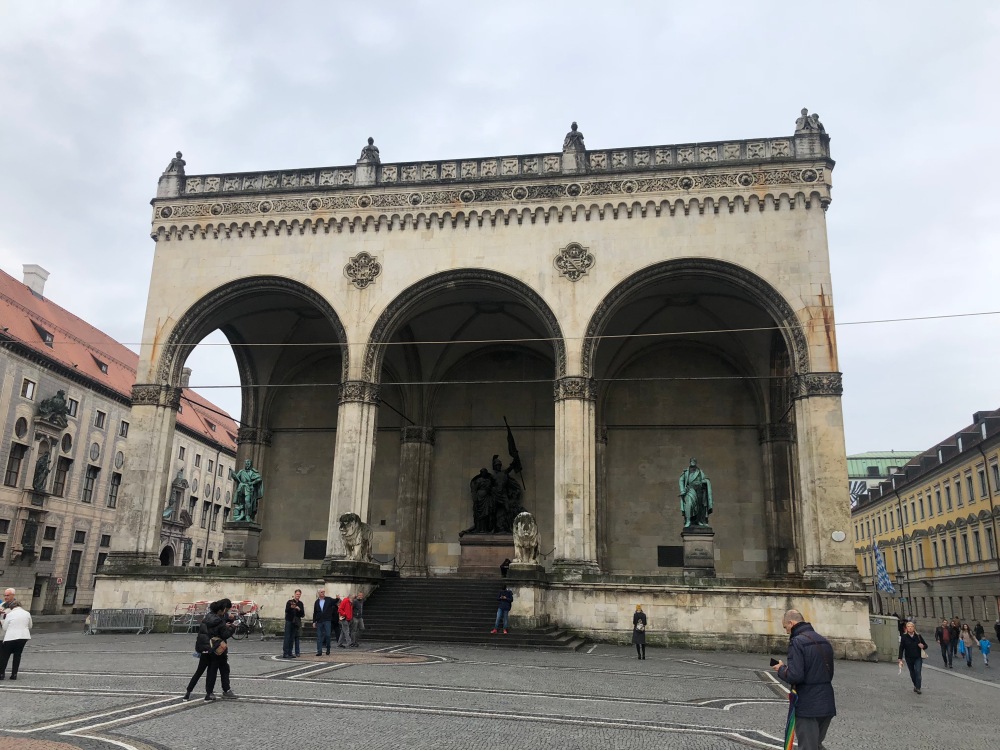 For me the weather was perfect, it was cold and crisp and I wrapped up warm in a knitted jumper and grabbed a warm coffee. I could have spent all day wandering around the quaint streets of Munich.

We stopped at a pizzeria for lunch where I grabbed a tomato and avocado salad with an espresso macchiato, and we caught up over the last four years since we’d last seen each other! I’m not sure why, but I didn’t take any pictures from this part of my day, but after we said our goodbyes, I spent a couple of hours in town doing a little shopping before I went back to the hotel to rest before the wake up call.

I had a great couple of days in Munich, its a great city and I am 100% for sure, returning next year so I can fully participate in the activities of Oktoberfest! Auf wiedersehen und danke München!