Onto our next part of the holiday we we’re visiting Siem Reap. A new country for both me and my sister and I couldn’t wait to finally explore Cambodia. We were staying for 3 nights and flew with Air Asia from Don Mueang International Airport in Bangkok. A short one hour flight and soon we had touched down in Cambodia.

After we checked in it was just after twelve lunchtime and we arranged to do a cooking class before exploring the town. The cooking class cost $26 (which is much pricier than others we saw later on in the week that were being offered for $15) at Champey Cooking School. For this price you were given a welcome drink and were shown how to make three different Khmer (traditional Cambodian) dishes and a visit to the local market, the latter which I don’t think added anything to the authentic experience, more put you off eating if I’m being totally honest…

First up we made fresh spring rolls which were actually a lot easier to make than expected and so yummy. 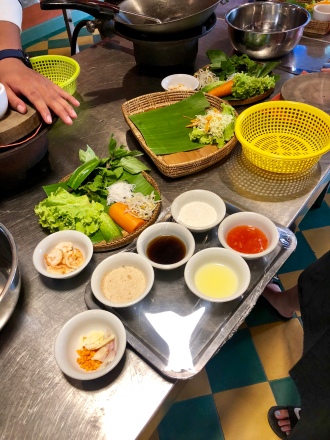 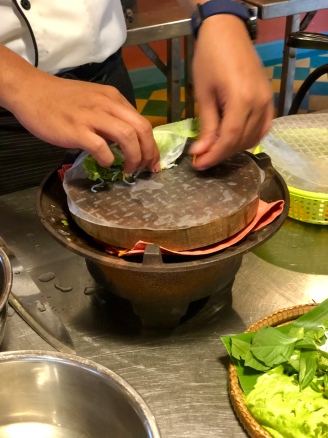 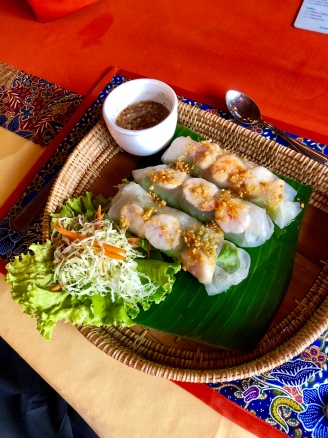 Next was amok fish curry with rice! This dish was so delicious and one that I will most definitely cook myself back in Dubai and cook for my family at some point too! 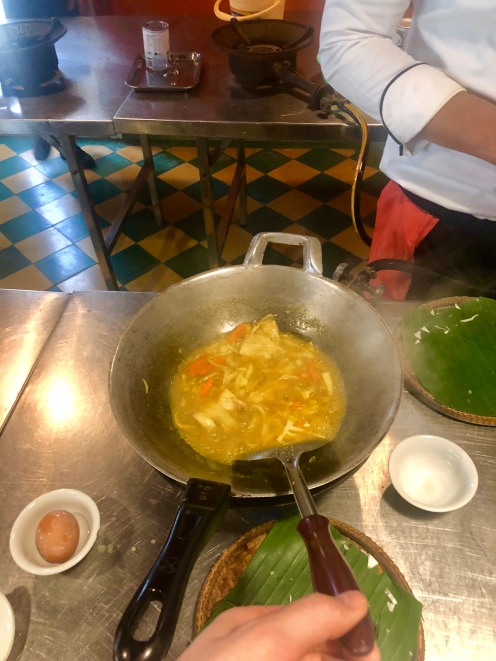 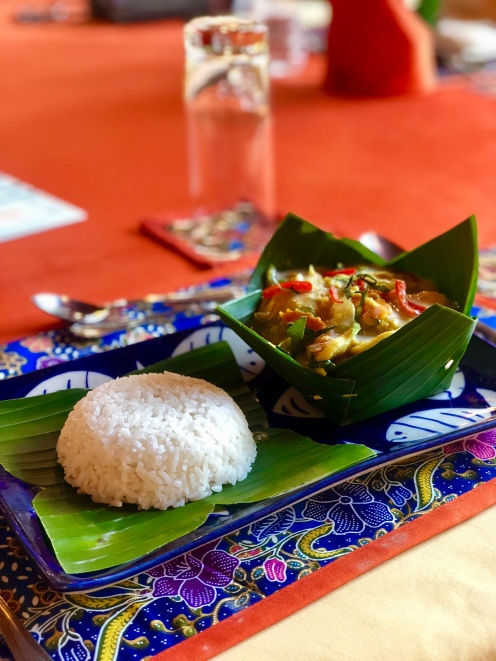 And finally we finished with Chef’s Banana Delight… this one wasn’t anything to write home about but a quick two minute dish if you’re trying to make bananas and custard (something we love at home) a bit more exciting.

When we finished we were given a certificate and a little gift bag that included the spices to make the amok curry which will come in useful for me!

After this we made our way over to Pub Street. Pub Street (or it’s official name Street 8) is a cross of two streets filled with restaurants, bars, cocktail lounges and nightclubs amongst tourist shops and massage parlours filled with bright lights and what I would define as the centre of Siem Reap and backpacker central. Hostels surrounded the area along with thousands of tuk tuks parked up everywhere, and at the back of the streets were night markets so huge you could get lost in all they have to offer.

It was daylight when we arrived here and we stopped in a bar for some local beer before we picked a restaurant for a snack.

We weren’t hungry for a full meal but could definitely eat something and I chose a plate of morning glory (Asian greens stir fried in oyster sauce with garlic and chilli). If you’ve never had this dish I can not recommend it enough, it is SO yummy and I can genuinely eat plates and plates of the stuff. Whenever I eat Thai food if it’s available, I’ll order a plate. 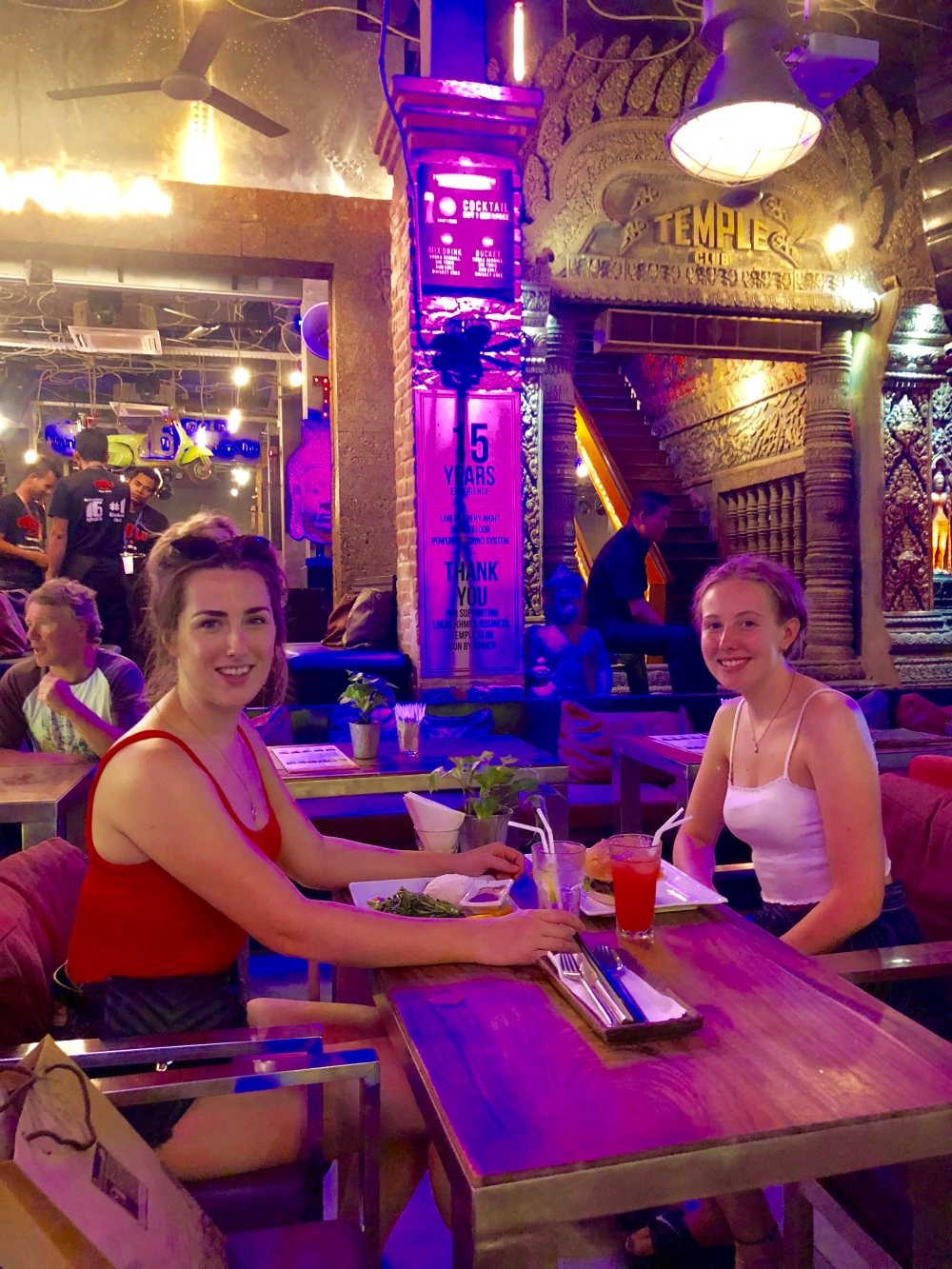 We had an earlyish night as we were up at 3:55am to go to Angkor Wat, so we took a tuk tuk back to the hotel.

Waking up early, we got dressed and went to meet our driver for the day who was taking us to the temples we wanted to visit. It was around a 20 minute drive to Angkor Wat and entrance was $37 for a one day pass which grants you access to not only Angkor Wat but the 72 temples which it boasts on it site.

Angkor Wat is a temple complex in Cambodia and the largest religious monument in the world, on a site measuring 162.6 hectares. It was originally constructed as a Hindu temple dedicated to the god Vishnu for the Khmer Empire, gradually transforming into a Buddhist temple towards the end of the 12th century. It was built by the Khmer King Suryavarman II in the early 12th century in Yaśodharapura the capital of the Khmer Empire, as his state temple and eventual mausoleum. Breaking from the Shaiva tradition of previous kings, Angkor Wat was instead dedicated to Vishnu. As the best preserved temple at the site, it is the only one to have remained a significant religious centre since its foundation. The temple is at the top of the high classical style of Khmer architecture. It has become a symbol of Cambodia, appearing on its national flag, and it is the country’s prime attraction for visitors.

Angkor Wat combines two basic plans of Khmer temple architecture: the temple-mountain and the later galleried temple. It is designed to represent Mount Meru, home of the devas in Hindu mythology: within a moat more than 5 km long and an outer wall 3.6 kilometres (2.2 mi) long are three rectangular galleries, each raised above the next. At the centre of the temple stands a quincunx of towers. Unlike most Angkorian temples, Angkor Wat is oriented to the west; scholars are divided as to the significance of this. The temple is admired for the grandeur and harmony of the architecture, its extensive bas-reliefs, and for the numerous devatas adorning its walls. 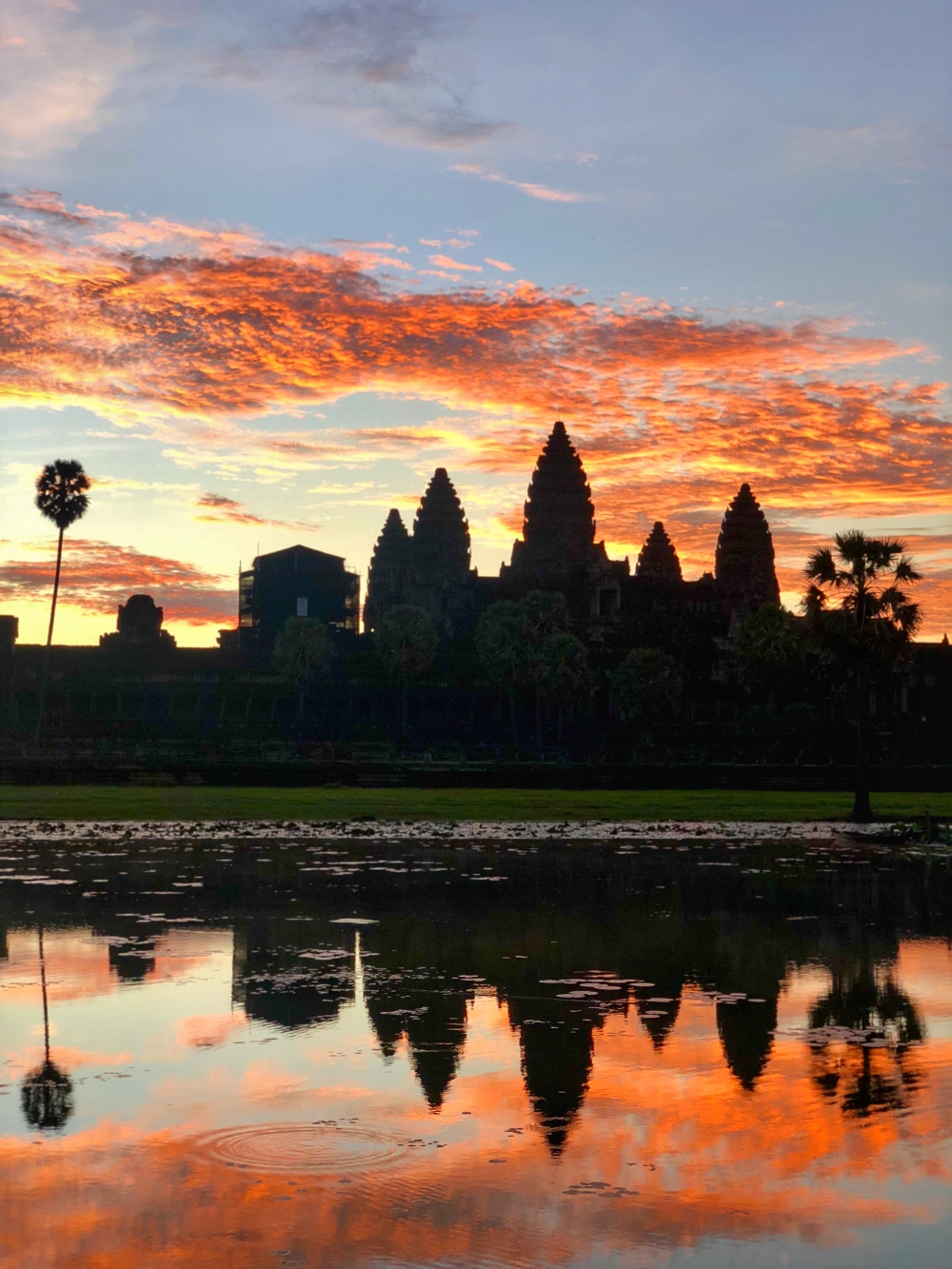 Many tourists flock to Angkor Wat for its infamously beautiful sunrises and sunsets, and me and my sister were joined with many other tourists as you can see here… 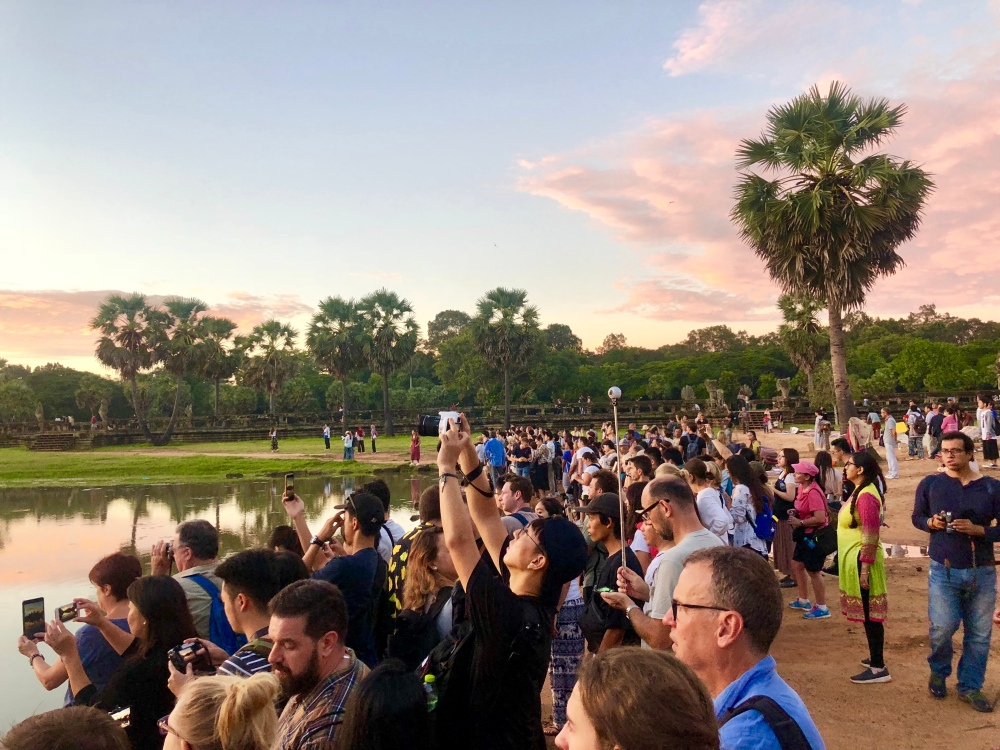 The temple opens at 5am, and I really recommend to get there for 5am so that you can get a good spot for the sunrise, but as we got there around 5:15am/5:20am I felt we missed a lot of the early colours. So bare this in mind when you do plan your trip if you’re heading for sunrise rather than sunset.

We then ventured inside the temple and it is absolutely huge! It reminded me of something from a film, like we had just stepped foot into a film set. It’s crazy to think how long this must have taken to build. 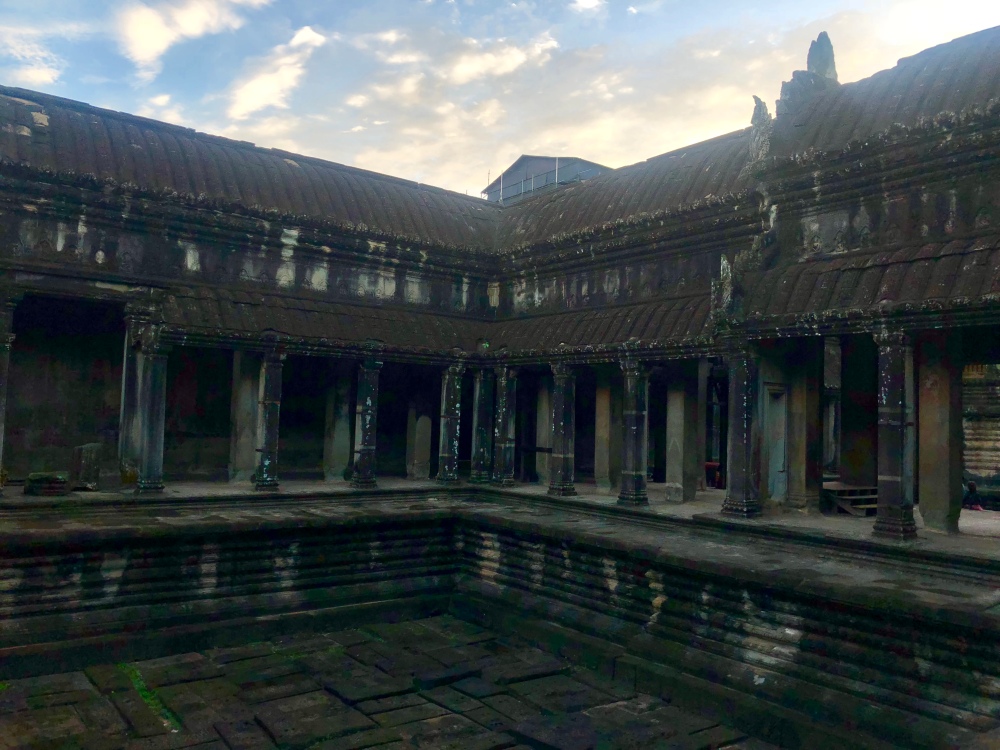 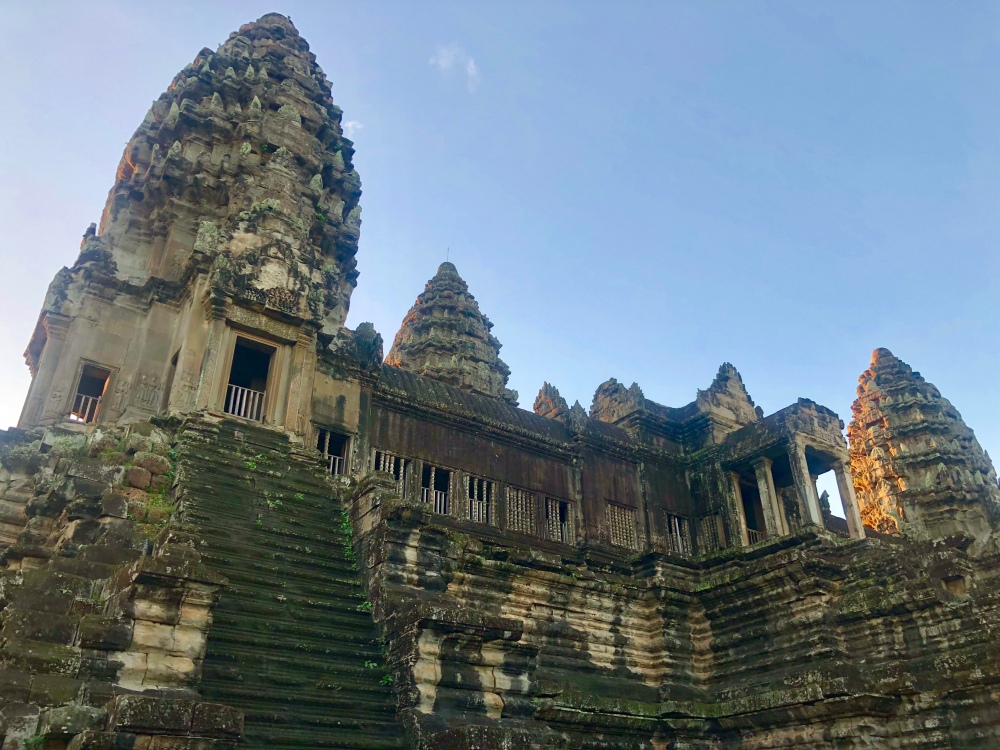 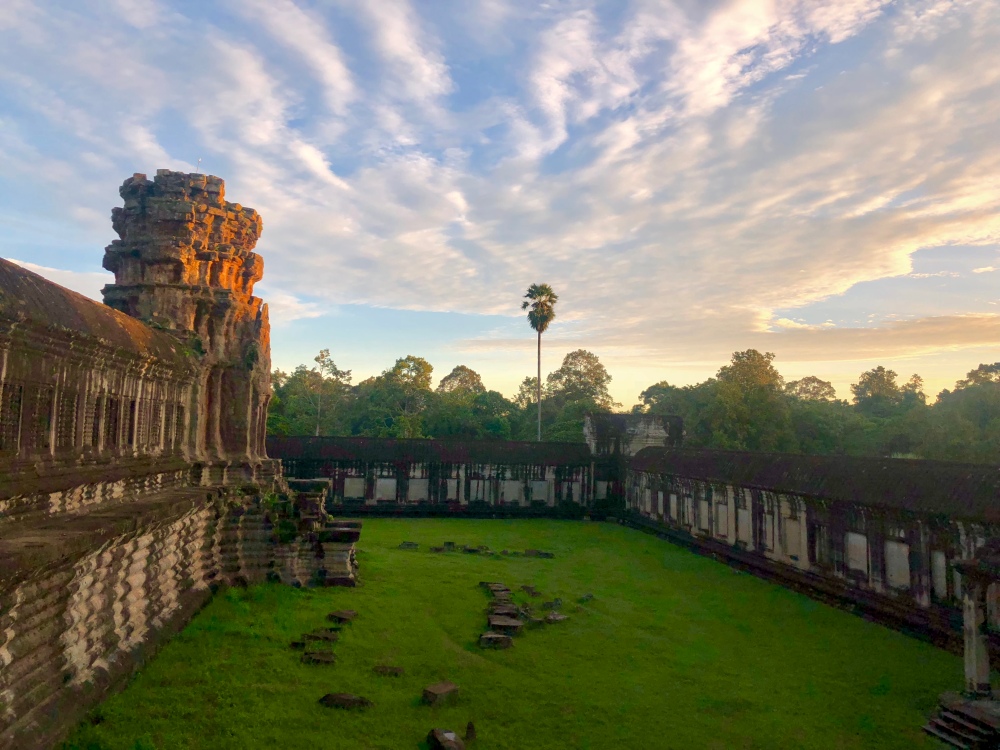 The grounds were huge and we spent plenty of time wandering in and out of the different walk ways, stairs and areas this UNSECO World Heritage Site has to offer. 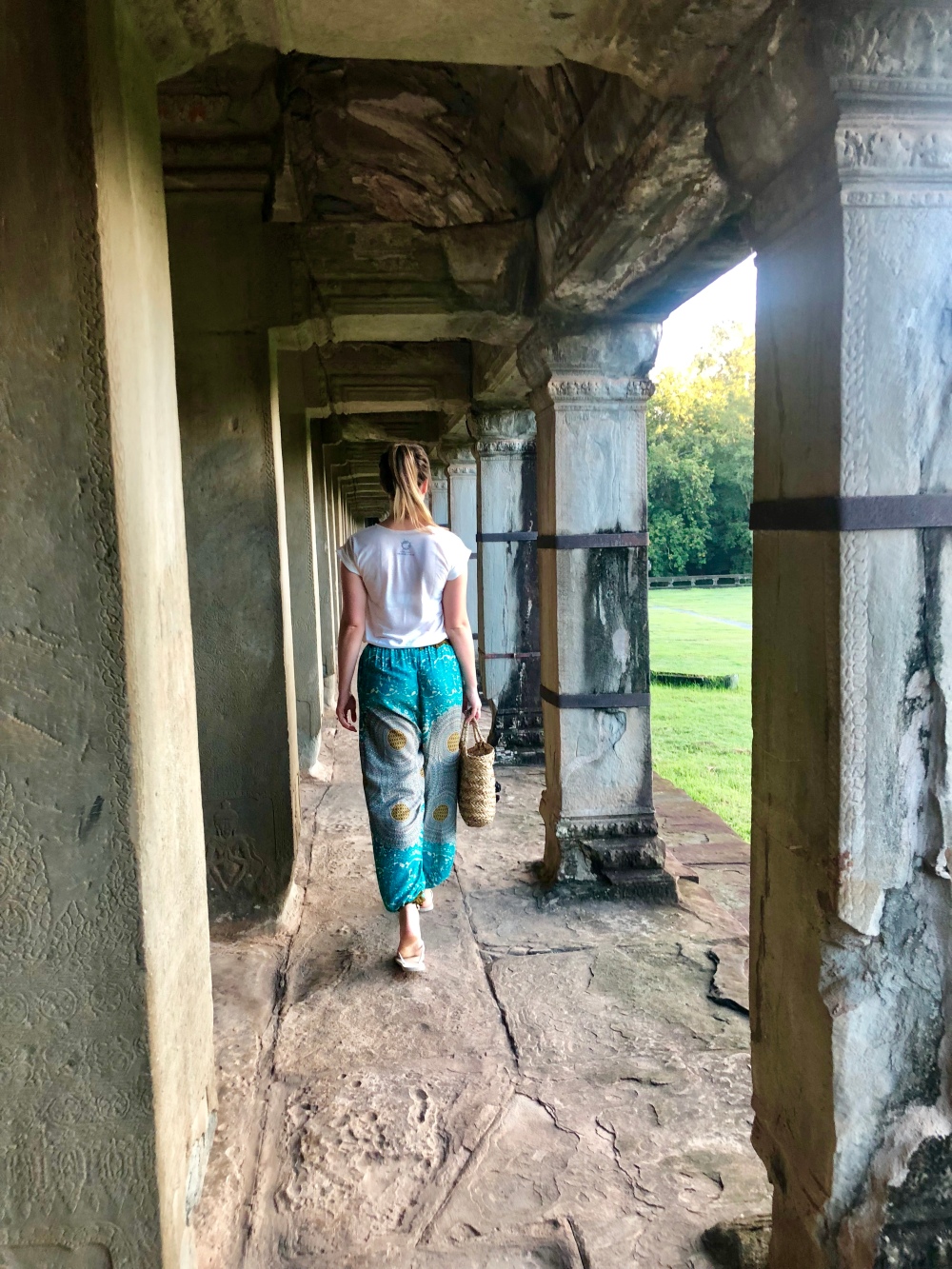 After a good couple hours here, we moved over to Bayon Temple. The Bayon is a richly decorated Khmer temple at Angkor in Cambodia. Built in the late 12th or early 13th century as the state temple of the Mahayana Buddhist King Jayavarman VII , the Bayon stands at the centre of Jayavarman’s capital, Angkor Thom. Following Jayavarman’s death, it was modified and augmented by later Hindu and Theravada Buddhist kings in accordance with their own religious preferences.

The Bayon’s most distinctive feature is the multitude of serene and smiling stone faces on the many towers which jut out from the upper terrace and cluster around its central peak. The temple has two sets of bas-reliefs, which present a combination of mythological, historical, and mundane scenes. The main conservatory body, the Japanese Government Team for the Safeguarding of Angkor  has described the temple as “the most striking expression of the baroque style” of Khmer architecture, as contrasted with the classical style of Angkor Wat.

A relatively small temple that we managed to wander round within about thirty minutes before we wandered across to our third and final stop of the day, Tah Prohm.

Ta Prohm is the modern name of the temple at Angkor, Siem Reap Province, Cambodia, built in the Bayon style largely in the late 12th and early 13th centuries and originally called Rajavihara. Located approximately one kilometre east of Angkor Thom and on the southern edge of the East Baray, it was founded by the Khmer King Jayavarman VII as a Mahayana Buddhist monastery and university.

Unlike most Angkorian temples, Ta Prohm is in much the same condition in which it was found: the photogenic and atmospheric combination of trees growing out of the ruins and the jungle surroundings have made it one of Angkor’s most popular temples with visitors. UNESCO inscribed Ta Prohm on the World Heritage List in 1992. Today, it is one of the most visited complexes in Cambodia’s Angkor region. The conservation and restoration of Ta Prohm is a partnership project of the Archaeological Survey of India and the APSARA (Authority for the Protection and Management of Angkor and the Region of Siem Reap).

The temple of Ta Prohm was used as a location in the film Tomb Raider with Angelina Jolie. Although the film took visual liberties with other Angkorian temples, its scenes of Ta Prohm were quite faithful to the temple’s actual appearance, and made use of its eerie qualities.

Then we were back to the hotel, just in time for breakfast before it finished for the day. We were really tired after our early start and lack of sleep, so we decided to go for a little nap (which actually turned into five hours) before we got on with our day.

We walked into the centre in a search for some lunch. I’d had a little google and came across a cute cafe called Sister Srey. The menu was absolutely amazing, and both me and my sister really struggled to decide what to have. After opting for two iced vanilla lattes, I went for the smoothie bowl and my sister this delicious sounding salad. 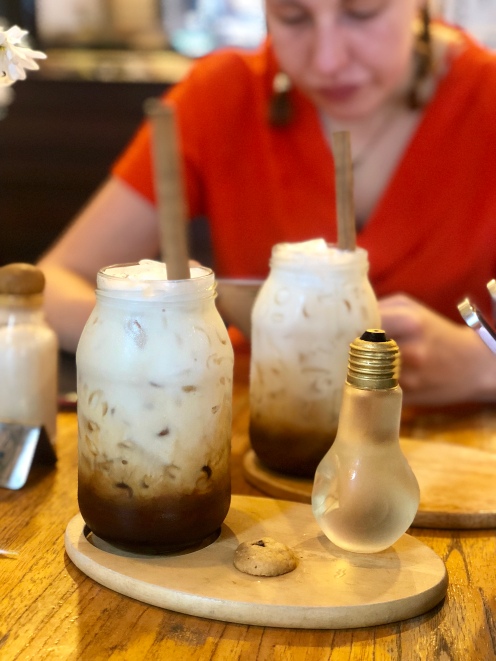 For anyone visiting Siem Reap, I highly recommend this quirky cafe, especially if you’ve had enough of asian food and desperately want a break from it. Feeling full up, we wandered into Psah Chas (the markets surrounding Pub Street) in the search of small circular wicker bags. I bought one in Bali last year for the equivalent of £5 (you’ve probably seen this bag in my previous posts) and my Mum wanted me to get her one. But many of the vendors were charging a fortune, some even as high as $35!!! Even after trying to bargain with them, we left empty handed. 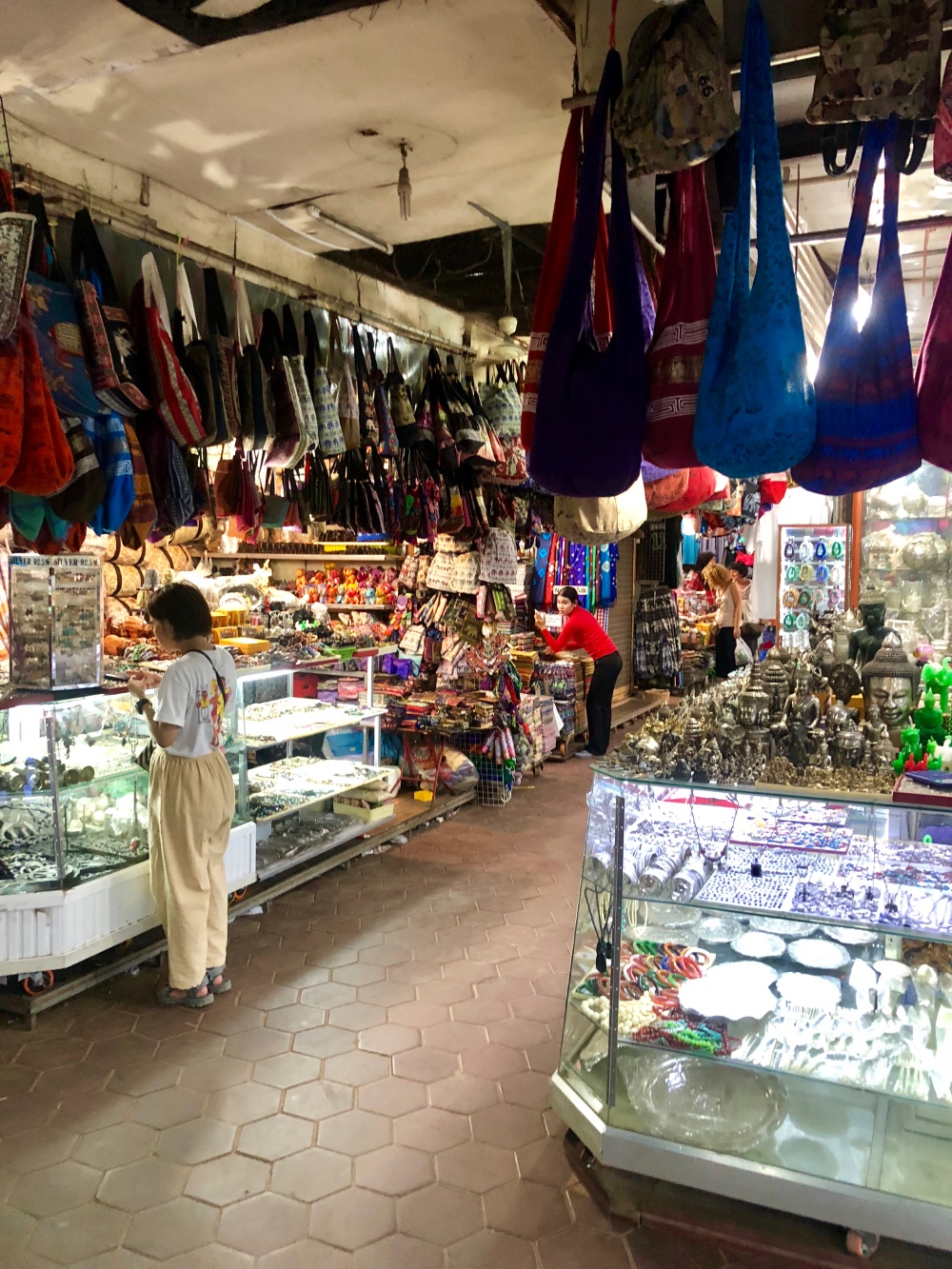 When we let Psah Chas the heavens had opened and the biggest downpour of rain you have EVER seen was coming down with huge claps of thunder and flashes of lightning. So we jumped in a tuk tuk back to the hotel to escape the storm, and planned what we would do next.

Googling how long this what expected to last for, we got ready for our evening and had chosen to go to the Cambodian Circus, Phare, which is one of the recommended things to do for tourists when in Siem Reap and also under shelter. Price of the ticket was $18 and the show lasted approximately 90 minutes without a break. It was very entertaining and they told a traditional story whilst doing all sorts of incredible acts. It was very entertaining and we sat drinking $1 beer and popcorn whilst we watched the show. 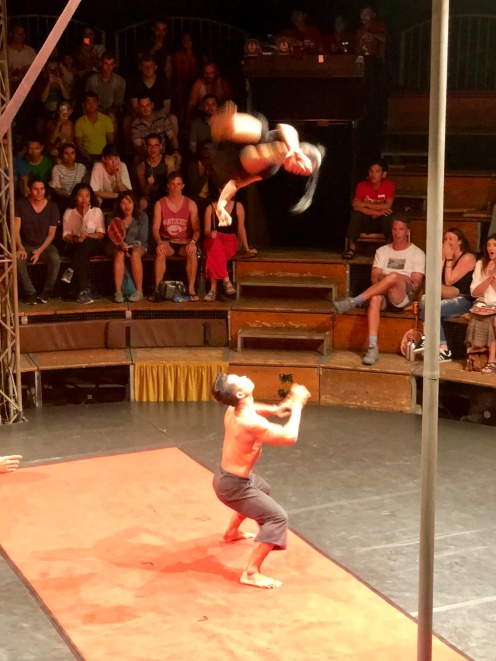 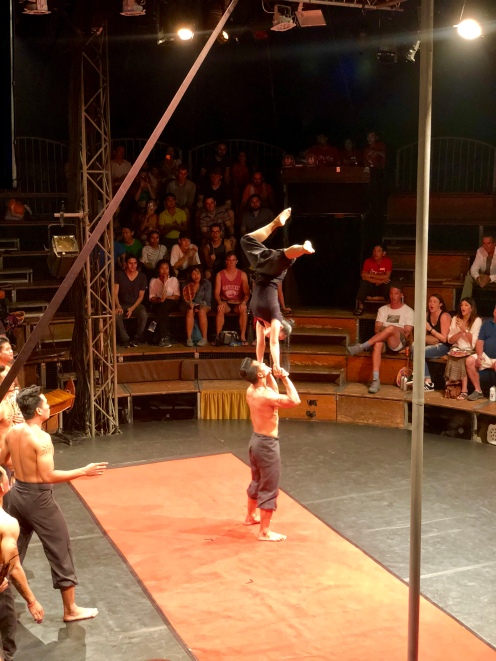 Then we headed to Pub Street for some dinner, before we had a bit of a night out. With drinks so cheap, it seemed rude not to? 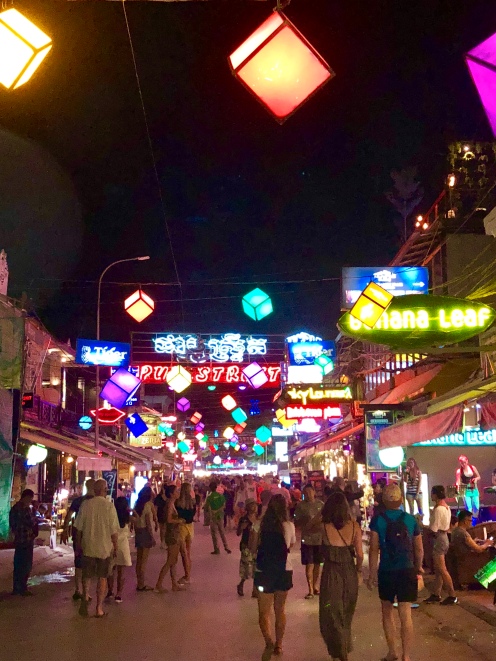 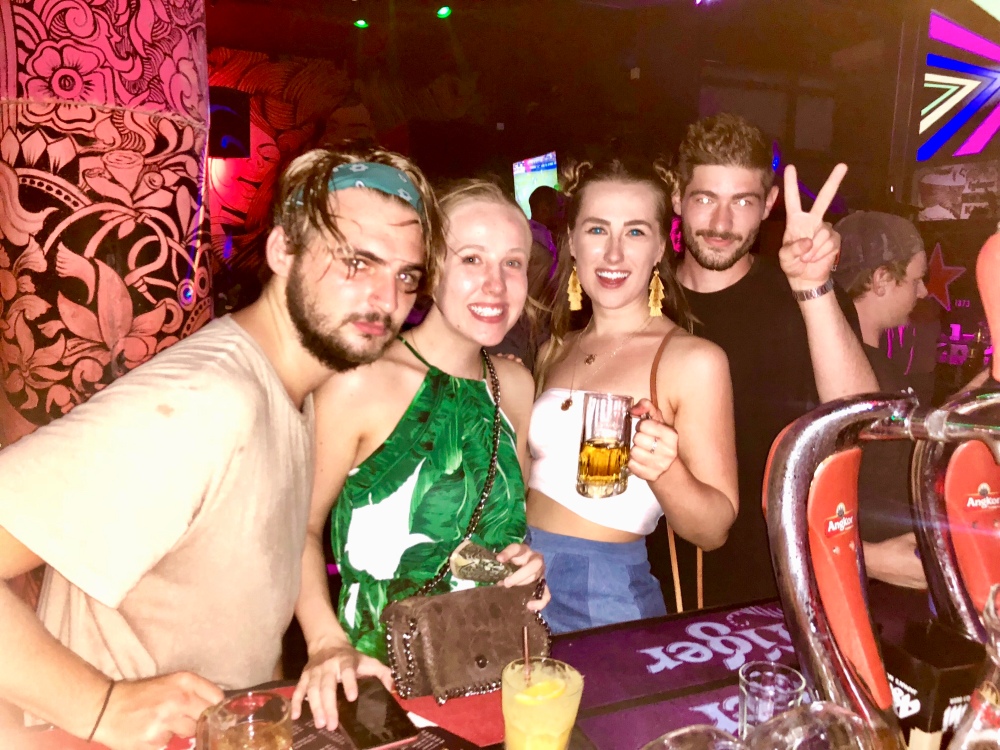