A flight I’ve been bidding for, for over a year now, to see my friend Guya. And I’m more than happily pulled out for it at the back end of my reserve month. Happy happy days. Departing Dubai at 8:15am, it was 14 hours over to Boston Logan International Airport in the US.

Landing just after half one in the afternoon, we made our way over to our lovely hotel in the centre and I arranged to meet up with my friend Guya a couple hours later. 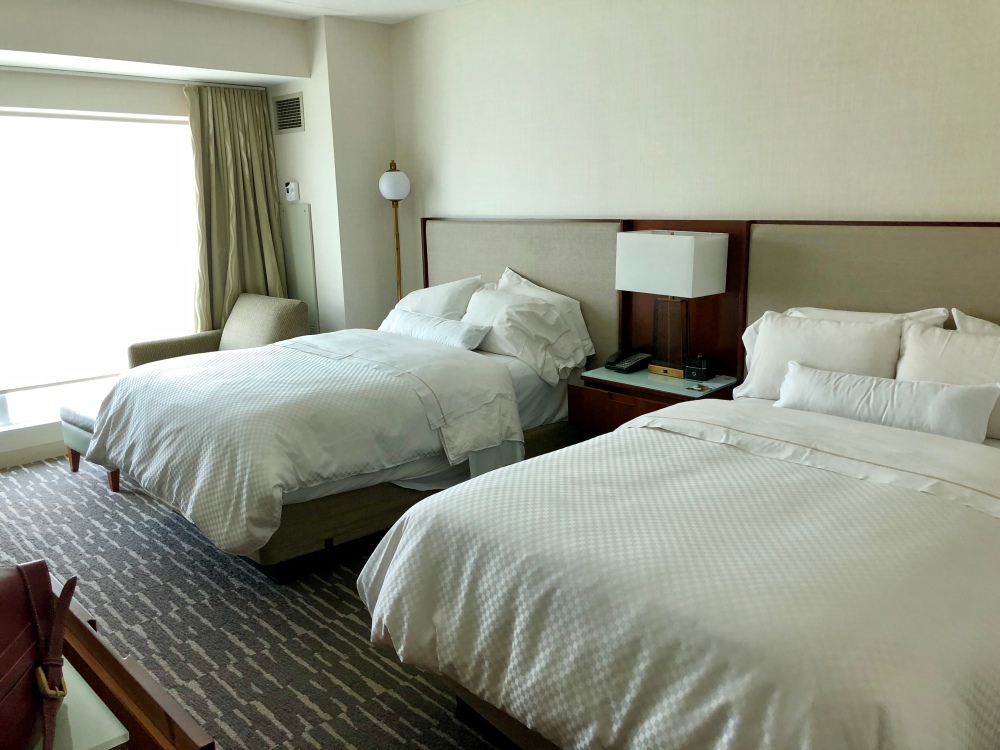 We arranged to go to The Lawn On D which is a park not far from my hotel with some fun summer activities. We grabbed a drink and played around on these cute swings in the gorgeous sunshine before taking an Uber downtown. 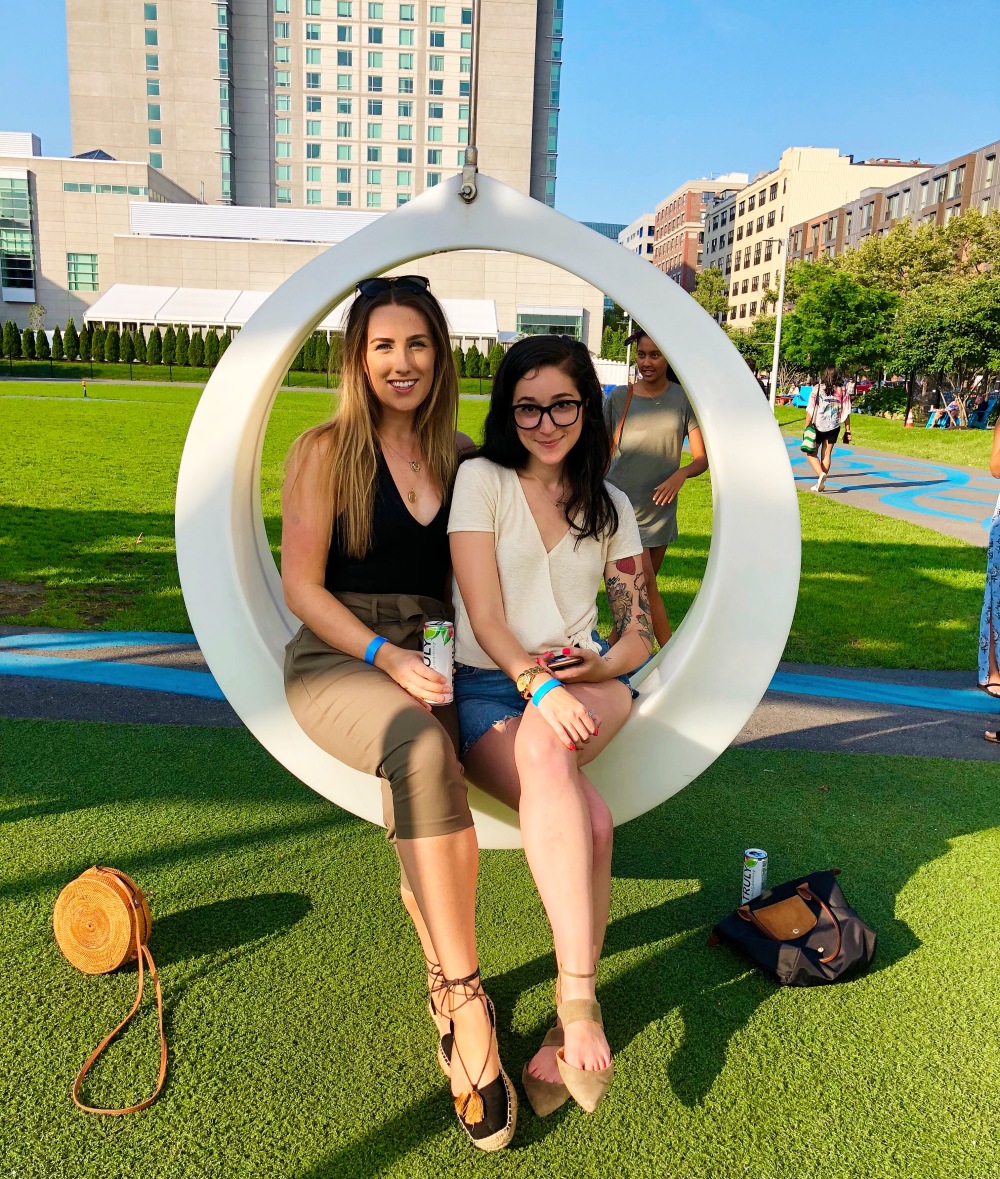 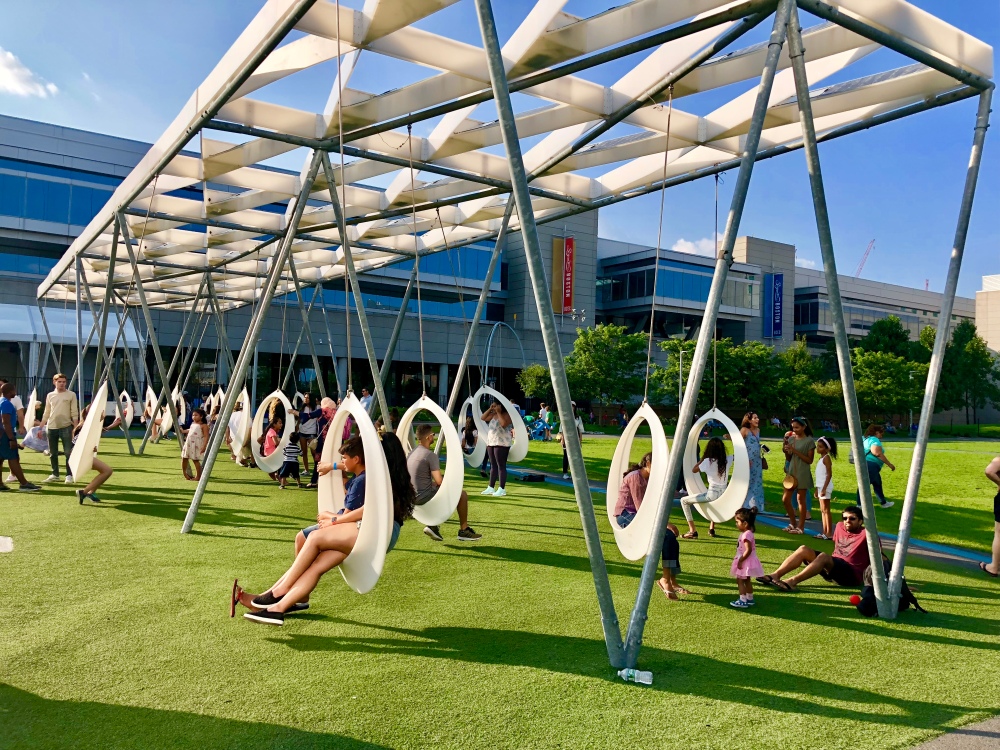 We were both hungry now and I wanted nothing more for some local cuisine (ie: a lobster roll) and Guya had the perfect spot in mind.

We called at a place called Cafeteria where I was finally able to get a lobster roll and Guya a burger and we sat chatting away whilst eating this insane food. I genuinely ate mine in about 3 minutes, it was SO good. 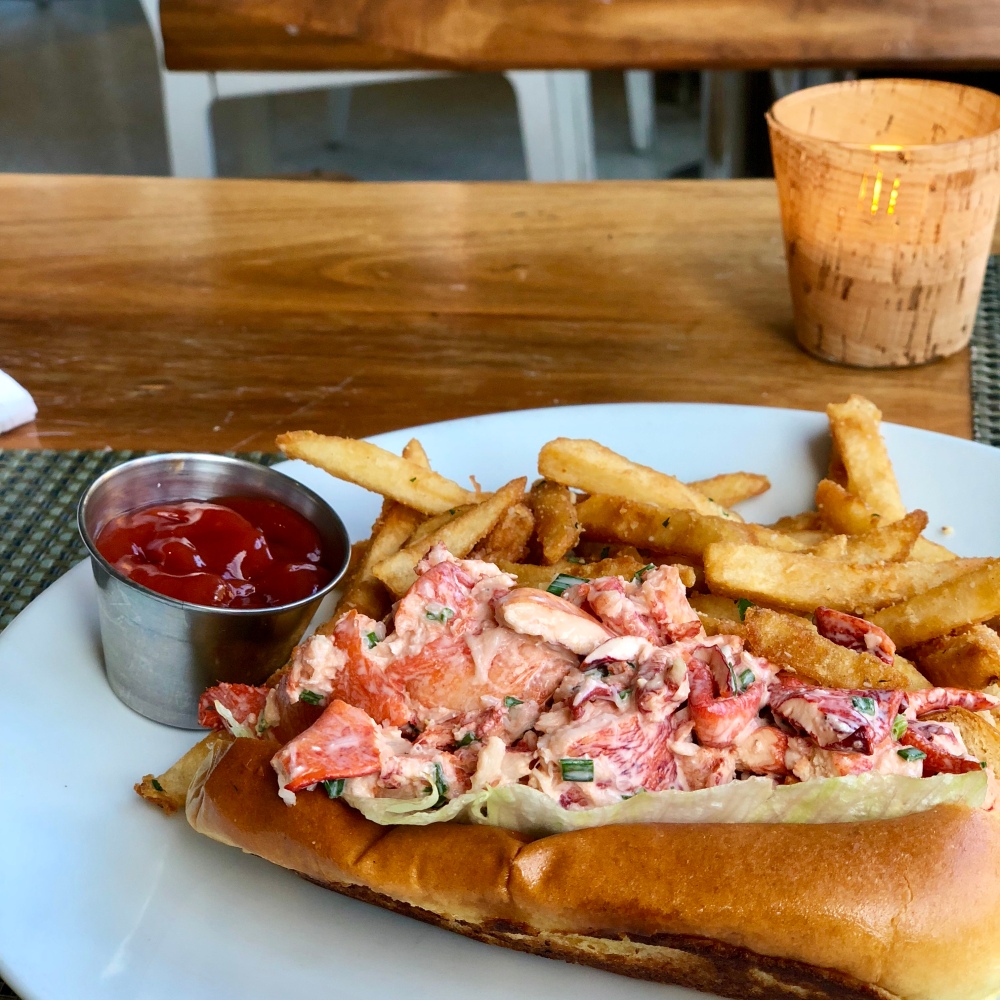 We then walked along Newbury St having a wander in and out the shops as we made our way towards Fenway Park, home of the Boston Red Sox. It was such a good night to be in Boston as the Red Sox were playing the New York Yankees. I thought Guya might want to attend as I know she’s a huge Red Sox fan, but with this being such a big game (if you want a comparison imagine Man Utd vs. Liverpool) so tickets were starting at $140 each just for the bad seats. Having no clue when it comes to baseball, Guya had the perfect solution with a hidden gem that I urge EVERYONE to utilise if they’re ever in Boston for a game. 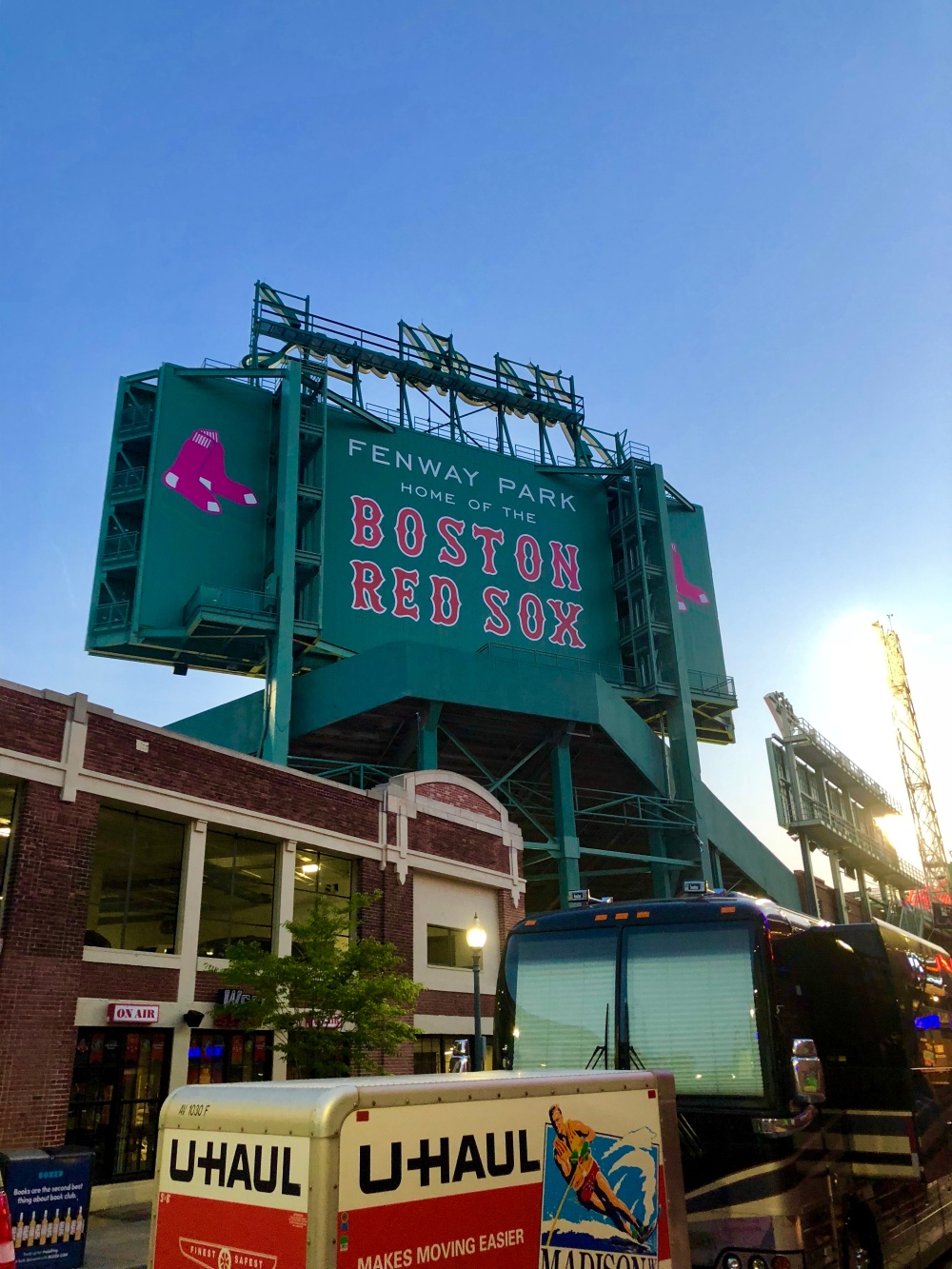 We went to a spot called Bleacher Bar which is a bar located inside the stadium, however the entrance is on the outside. So you don’t need a ticket to enter. What they do have which is absolutely brilliant is a huge glass window pane which looks out onto the pitch. From here we could see the game live in action as we had a drink. It was absolutely brilliant and we didn’t have to pay a thing to watch! Guya said that sometimes the ball hits the glass which gives that real emersion into the game feel. 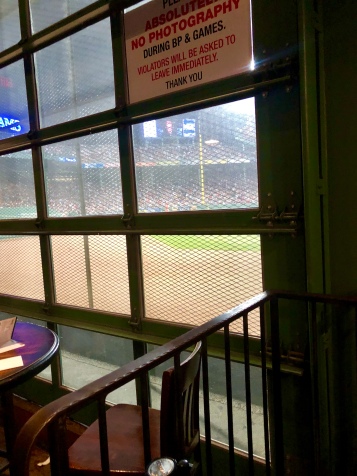 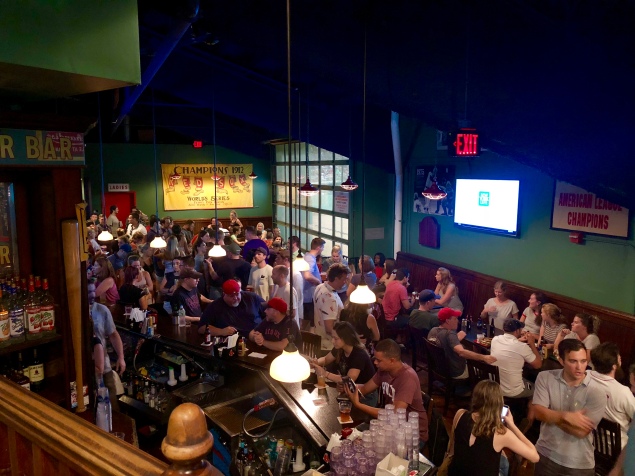 With time pressing on and me having been awake a really long time and only managing an hours sleep in crew rest. We called it a night and said our goodbyes. It’s crazy to think we last saw each other in December 2014, yet we both said how it only felt like last month! So lovely when you can just pick up where you left off with friends.

As soon as I got into the room I passed out in bed and had a good 9 hour sleep before the jet lag seeped in and woke me up around 7:30am. I tried to fight it but in the end gave up and decided to start my day. But first, coffee.

The one thing I really wanted to see whilst in Boston was Harvard University. Located just outside of Boston in the city of Cambridge (there is a lot of English influence in Boston which I LOVED), Harvard University is a Private Ivy League school and one of the most prestigious universities not only in the US, but worldwide. If you haven’t heard of Harvard, which rock have you been living under?? 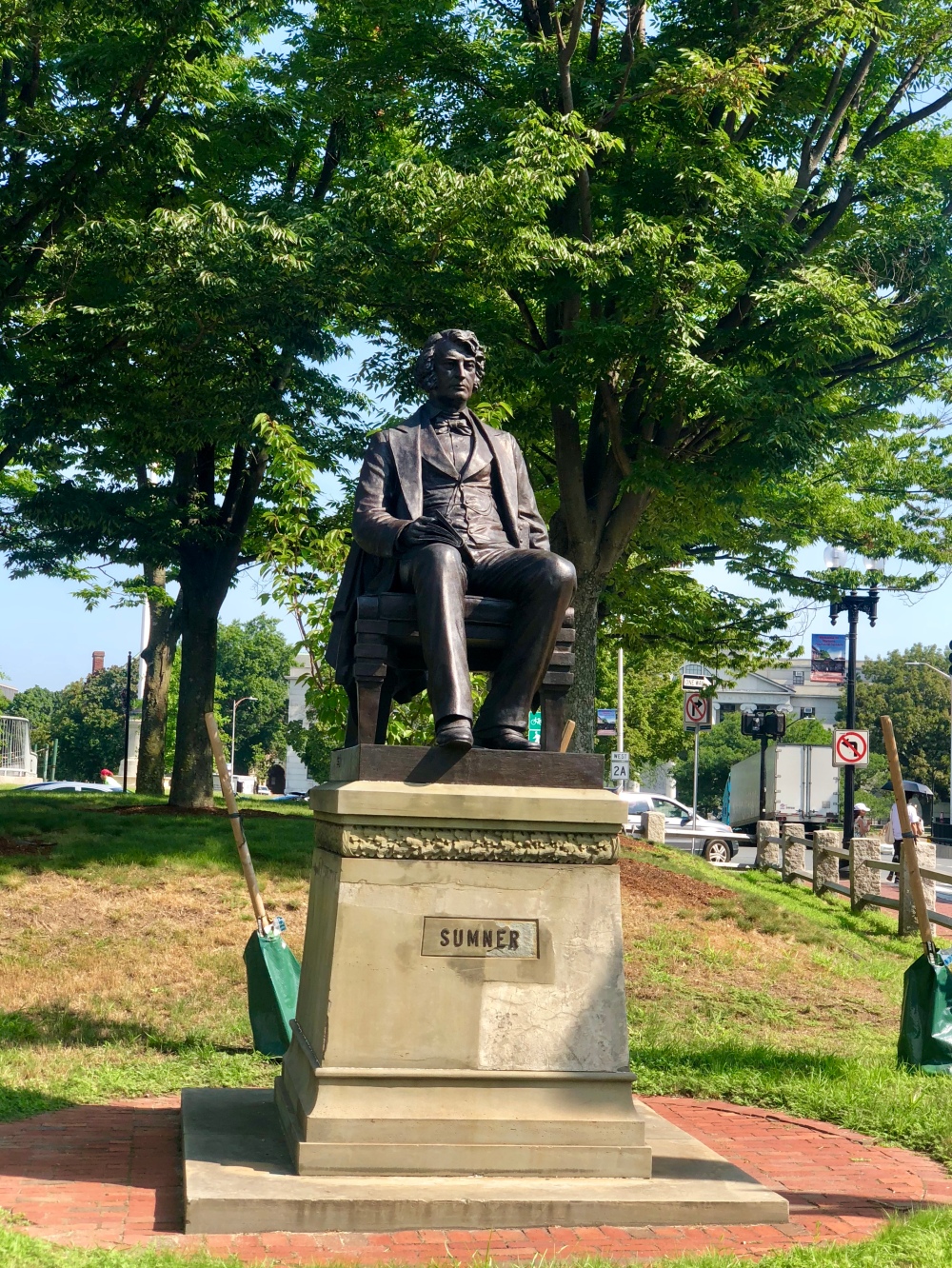 I took the T (metro) across the city which took about 15/20 minutes and cost only $2.75 which I didn’t think was bad at all! Alighting at Harvard Station I came out to the beautiful campus and college town. The American University I attended was in NO WAY in any similar league to Harvard this isn’t what I’m saying, but it gave me all those American college feels and brought back so many fond memories. 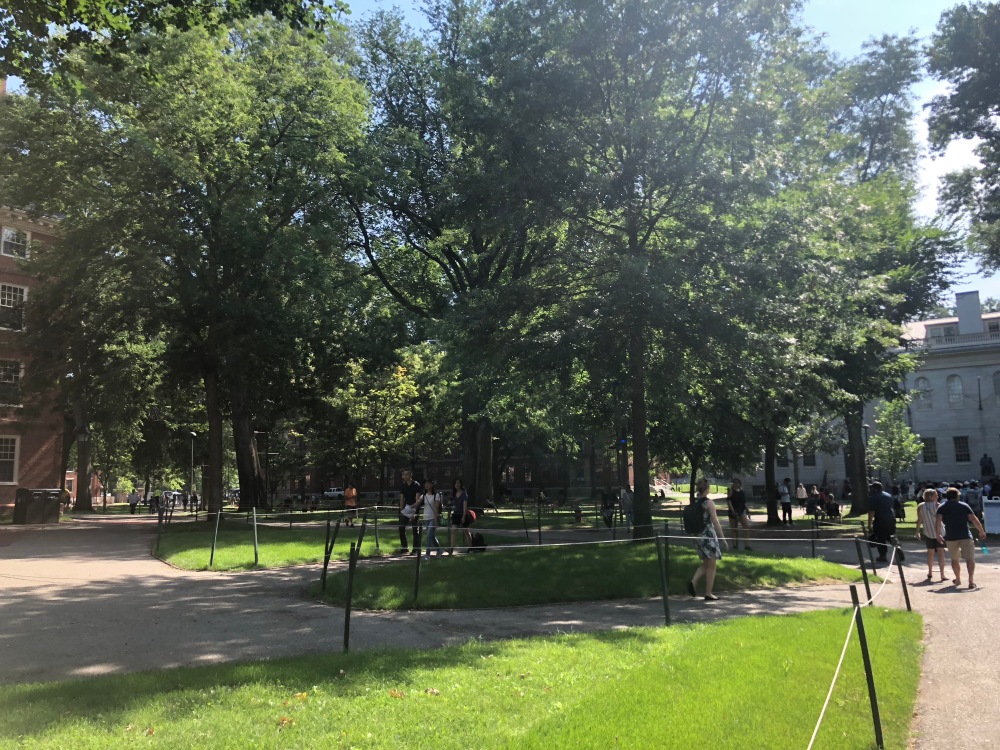 The university is organised into eleven separate academic units—ten faculties and the Radcliffe Institute for Advanced Study with campuses throughout the Boston metropolitan area: its 209 acre main campus is centred on Harvard Yard in Cambridge, approximately 3 miles (5 km) northwest of Boston; the business school and athletics facilities, including Harvard Stadium, are located across the Charles River in the Allston neighbourhood of Boston and the medical, dental, and public health schools are in the Longwood Medical Area. The endowment of Harvard’s is worth $37.1 billion, making it the largest of any academic institution. 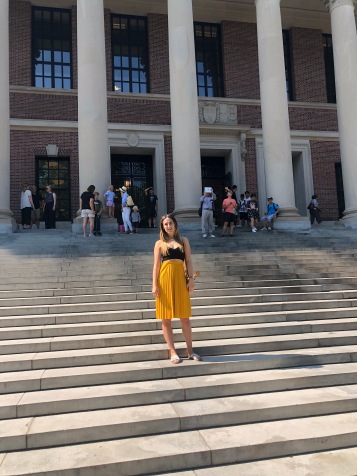 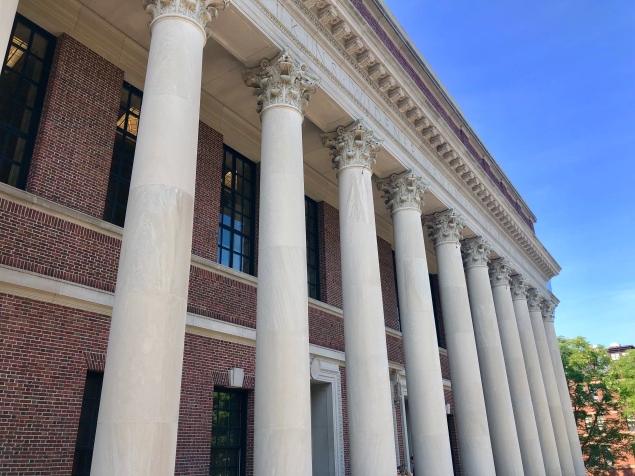 Harvard is a large, highly residential research university. The nominal cost of attendance is high, but the university’s large endowment allows it to offer generous financial aid packages. The Harvard Library is the world’s largest academic and private library system, comprising 79 individual libraries holding over 18 million items. The University is cited as one of the world’s top tertiary institutions by various organisations. 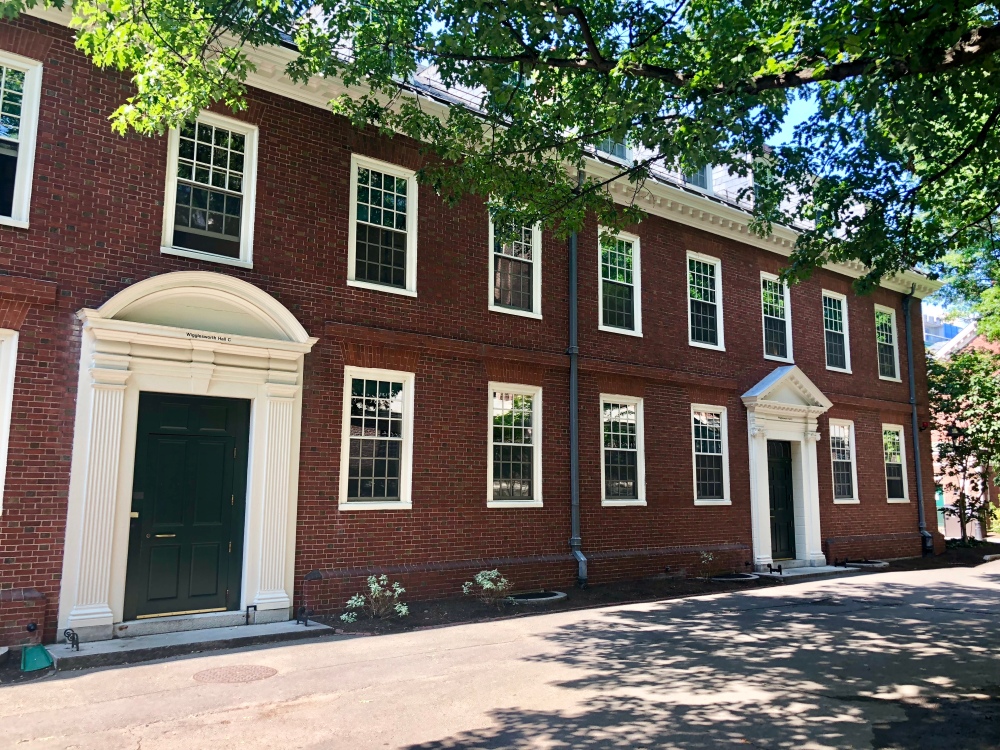 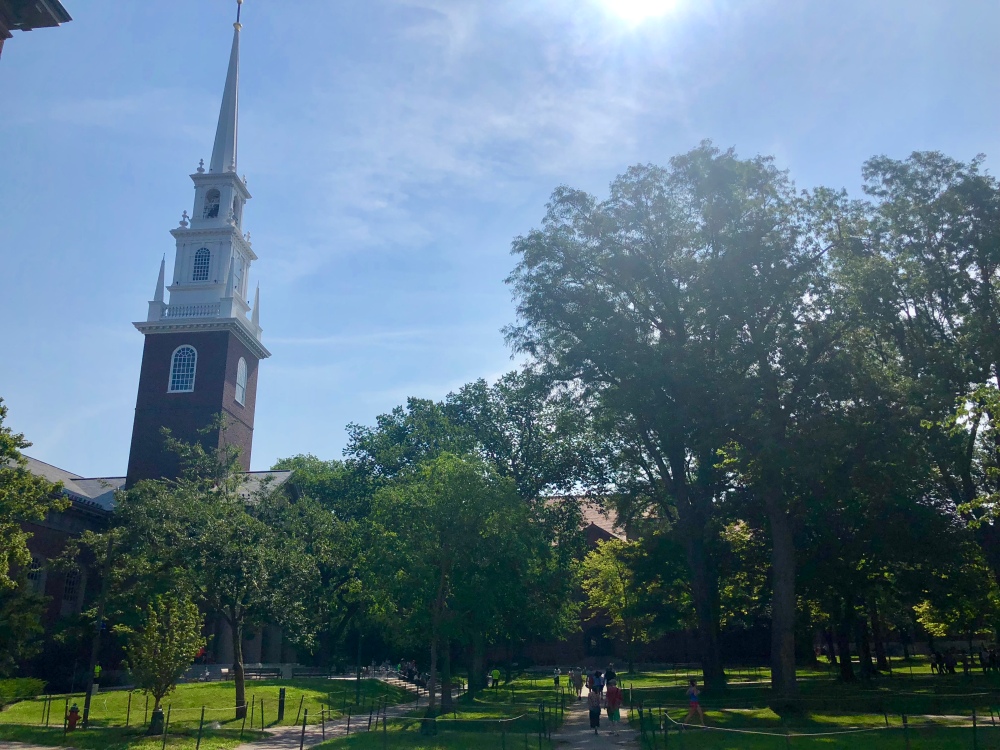 I wandered into the campus and strolled through the grounds. The halls and dorms were so decadent and everything was on such a grand scale. I can only imagine how proud you must feel to attend such a prestigious and renowned college and how it must feel to say “yeah I attend Harvard”. 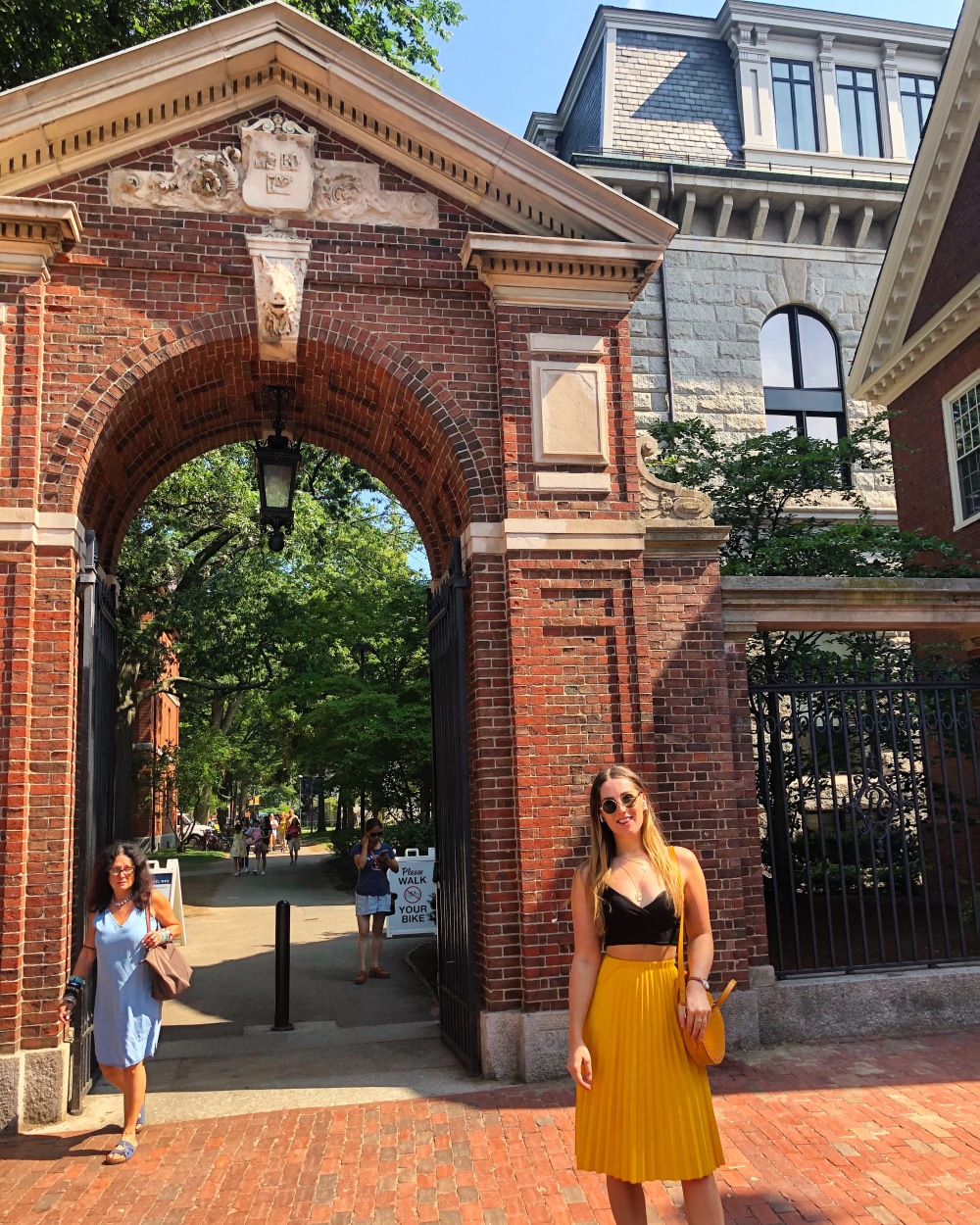 Not only this, but for anyone who’s watched Legally Blonde (if you haven’t, watch it at your earliest convenience) this is where we see Elle Woods attend to win back the heart of Warner. With my Starbucks in hand whilst listening to the Legally Blonde soundtrack I’ve never felt so Elle Woods in all my life. Absolutely nothing was going to get me down that day, I was channelling the strong independent woman vibes that Elle teaches us by the end of the film. 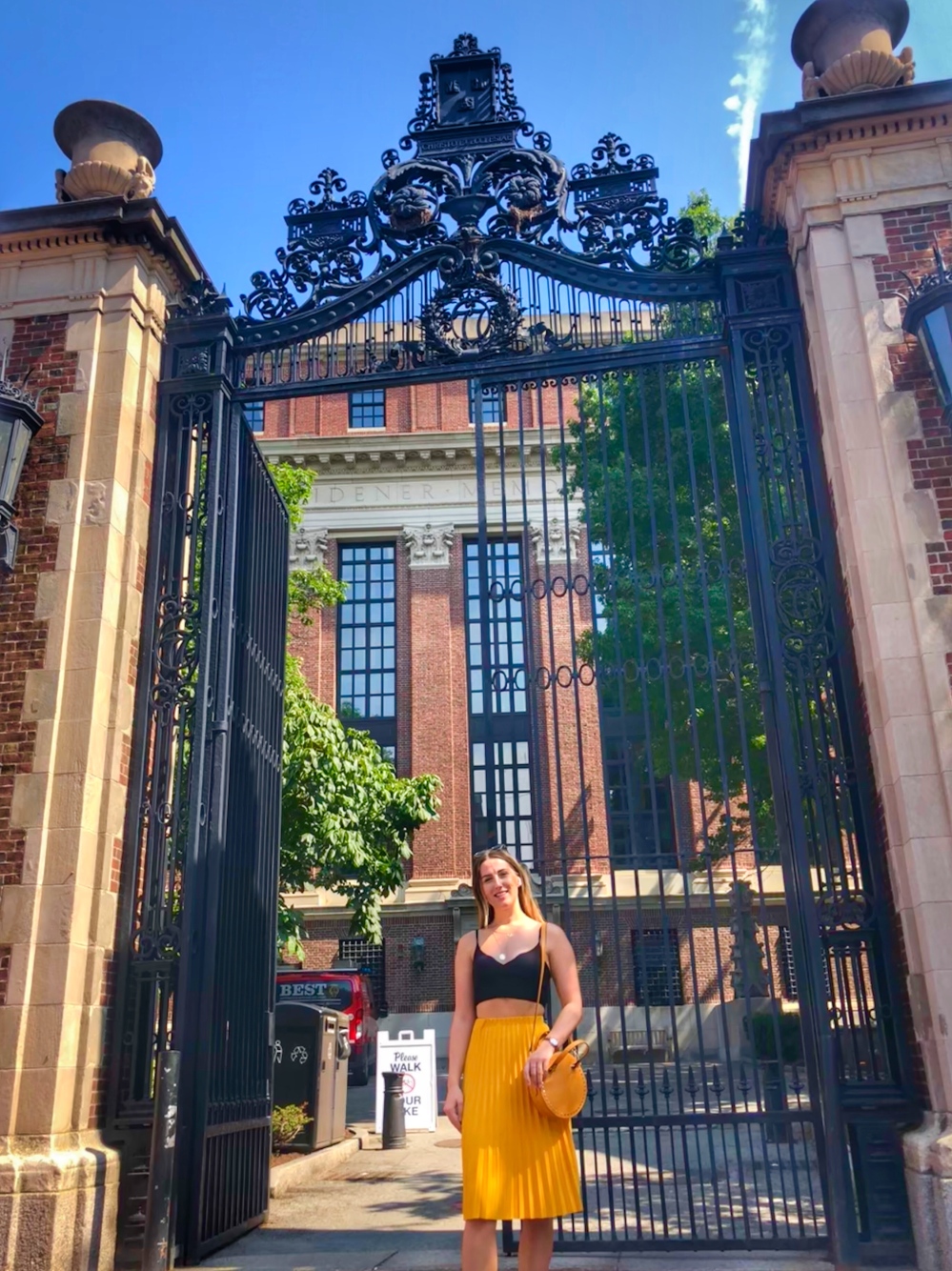 It had been a while since I’d eaten last night so I had a quick google of nice college cafes for breakfast and called at Crema Cafe. I opted for a twist on an English Breakfast muffin sandwich and a fresh watermelon lemonade. Food was really fab and not pricey at all. There were numerous people sat around with laptops doing work and it got me wondering what they were all studying. 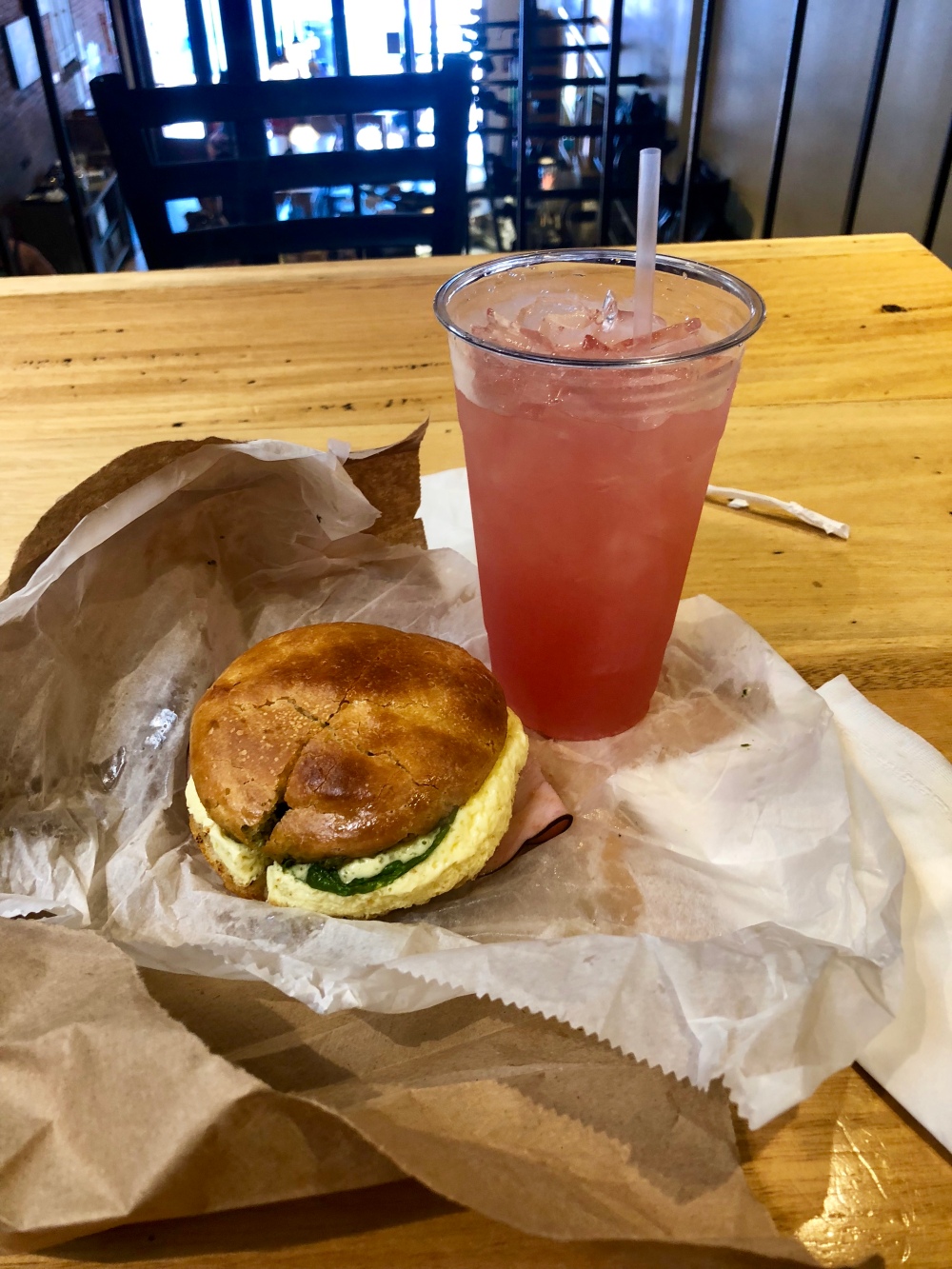 I wanted to do a campus tour but I’d just missed one and another wasn’t for another hour. Not wanting to wait and/or pay, I had a little stroll through the town back to the T to go into the city.

I’d wanted to do a little more shopping and stock up on all my favourite American products (I’d come to Boston with quite the empty case for this in mind) and to see what the centre was like. 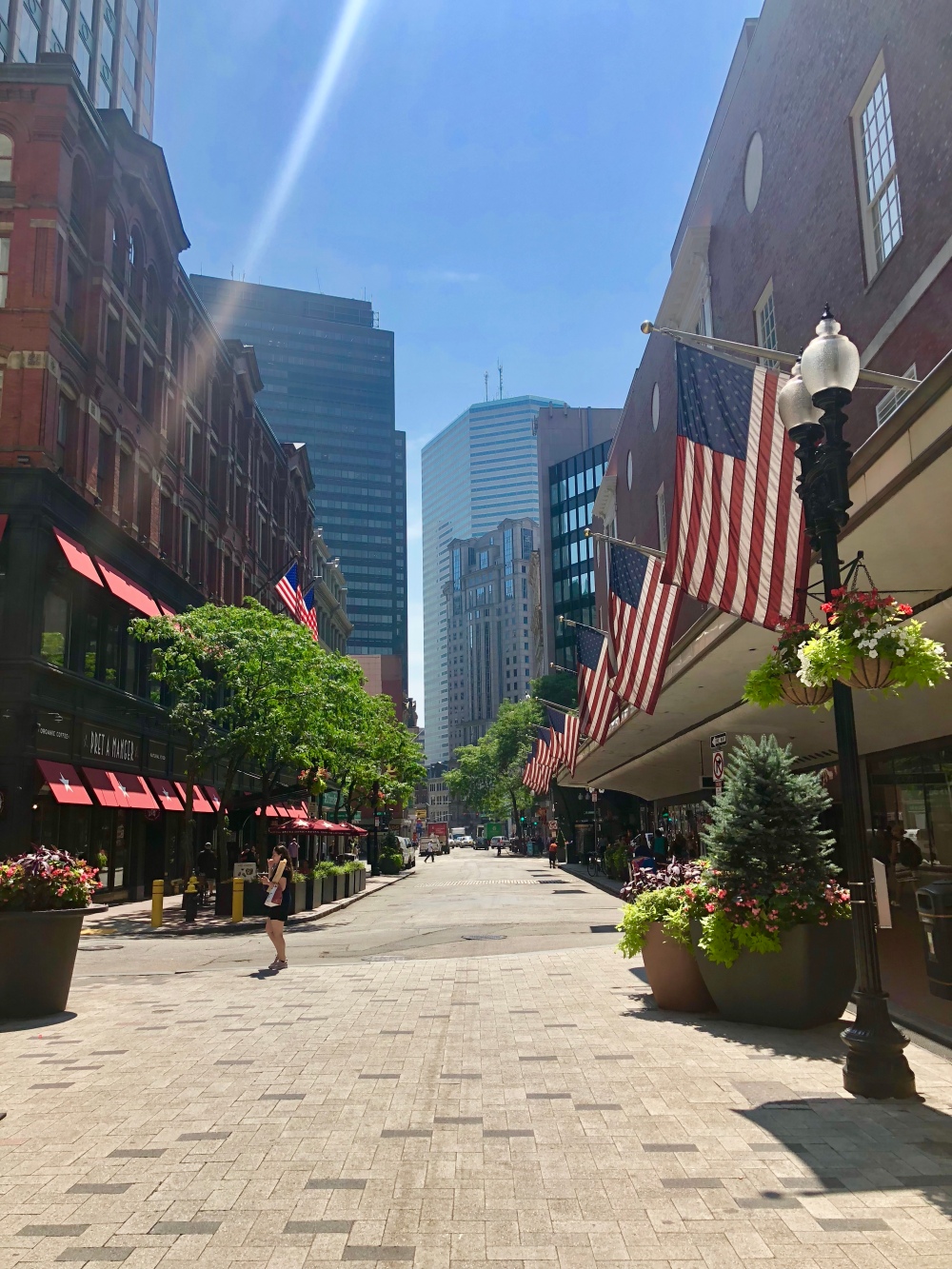 Shopping done, I walked through Boston Common which Guya described to me as “Boston’s version of Central Park” which I can totally agree with. It was so nice to be completely surrounded by greenery and it was such a gorgeous day at 33 degrees C that the park was filled with people enjoy the summer sun. 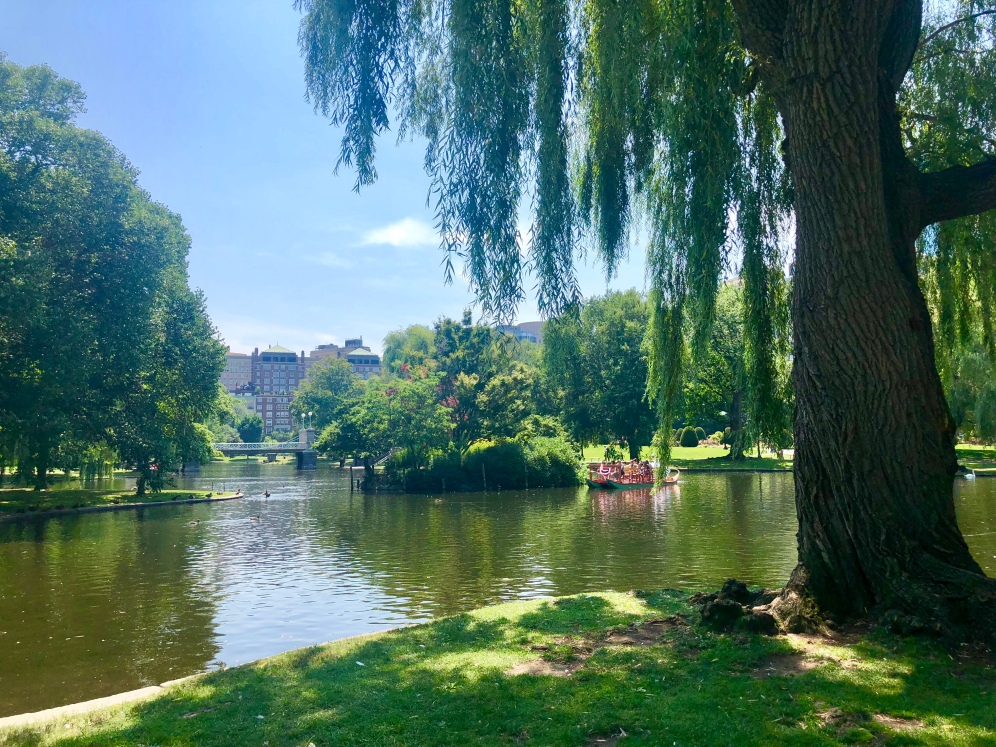 Hoping to get some sleep before the flight I grabbed a chipotle to eat in bed whilst watching some American Netflix in the hope I would get a bit of sleep before our long flight back to Dubai. Sadly no such luck, I fell asleep fifteen minutes before our wake up call, but I had a lovely layover so can’t complain.

I really enjoyed my time in Boston, both for catching up with Guya and also exploring this city that clearly has so much English influence. There’s a lot more that I want to see here and I wouldn’t be sad to see this on my roster again.