First stop of our trip was Las Vegas, but I’ll post on that later after I’ve discussed our day trip to Arizona to go and see the Grand Canyon, another wonder of the world!

We had been looking online and speaking with the concierge about the best and most cost effective way to see the Grand Canyon. One option was to rent a car, which we discussed, and drive the 9 and a half hour round trip from Nevada to Arizona and back in a day. Not feeling driving for such a long time to somewhere we weren’t too sure on how to get to, we opted for a tour. We found a 4th July special online for $70 which was so good in comparison to the others online which were starting at around $120 minimum per person!

Pick up from our hotel was at 6:45am and we began the long 4 and a half hour journey across to the Grand Canyon South Rim. 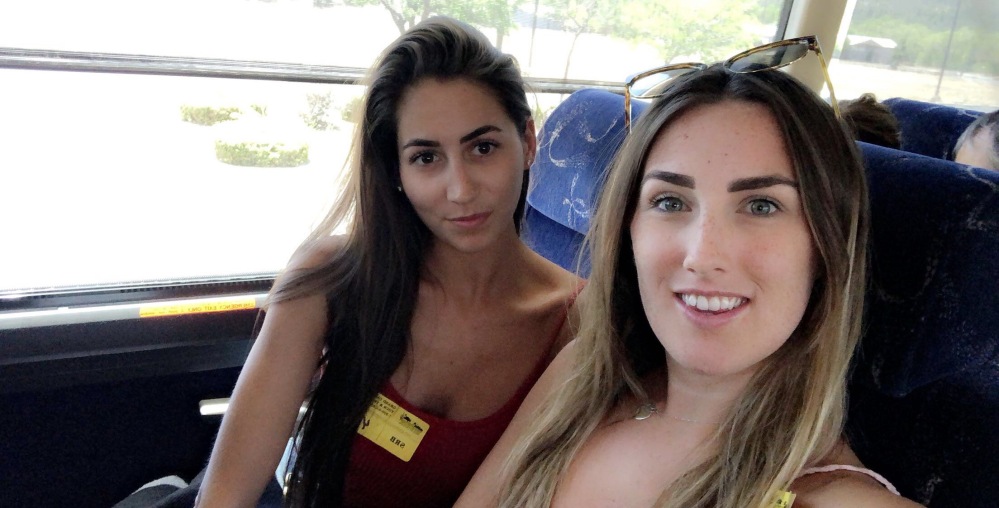 Around 3 hours into the journey we stopped for lunch (which was included in the cost of the trip) and tucked into a buffet lunch of typical American dishes such as mac and cheese and beef brisket.

Last leg of the journey out there and we arrived into the Grand Canyon National Park at 14:15. We were given an hour or so to wander round here and head back to the bus to the next stop, or you could hike from this point to the next. Me and Chantelle (sadly Grace was ill and wasn’t able to attend) hadn’t dressed for hiking not knowing that this was an option so we chose to wander around and take the coach over to the next point. 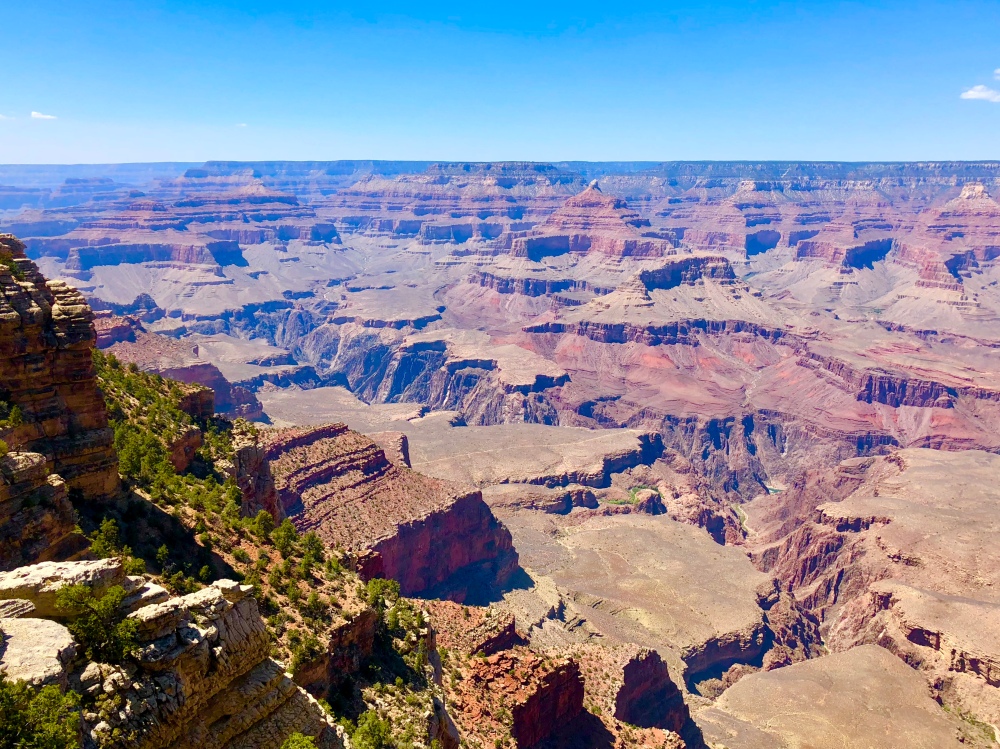 Nearly two billion years of Earth’s geological history have been exposed as the Colorado River and its tributaries cut their channels through layer after layer of rock while the Colorado Plateau was uplifted. While some aspects about the history of incision of the canyon are debated by geologists, several recent studies support the hypothesis that the Colorado River established its course through the area about 5 to 6 million years ago. Since that time, the Colorado River has driven the down cutting of the tributaries and retreat of the cliffs, simultaneously deepening and widening the canyon.

For thousands of years, the area has been continuously inhabited by Native Americans, who built settlements within the canyon and its many caves. The Pueblo people considered the Grand Canyon a holy site, and made pilgrimages to it. The first European known to have viewed the Grand Canyon was García López de Cárdenas from Spain, who arrived in 1540.

Myself and Chantelle, not even remotely dressed in hiking gear, managed to clamber on down into the canyon and out onto a thick ledge that we’d seen a few others doing. Talk about wanting to get that perfect picture moment right? 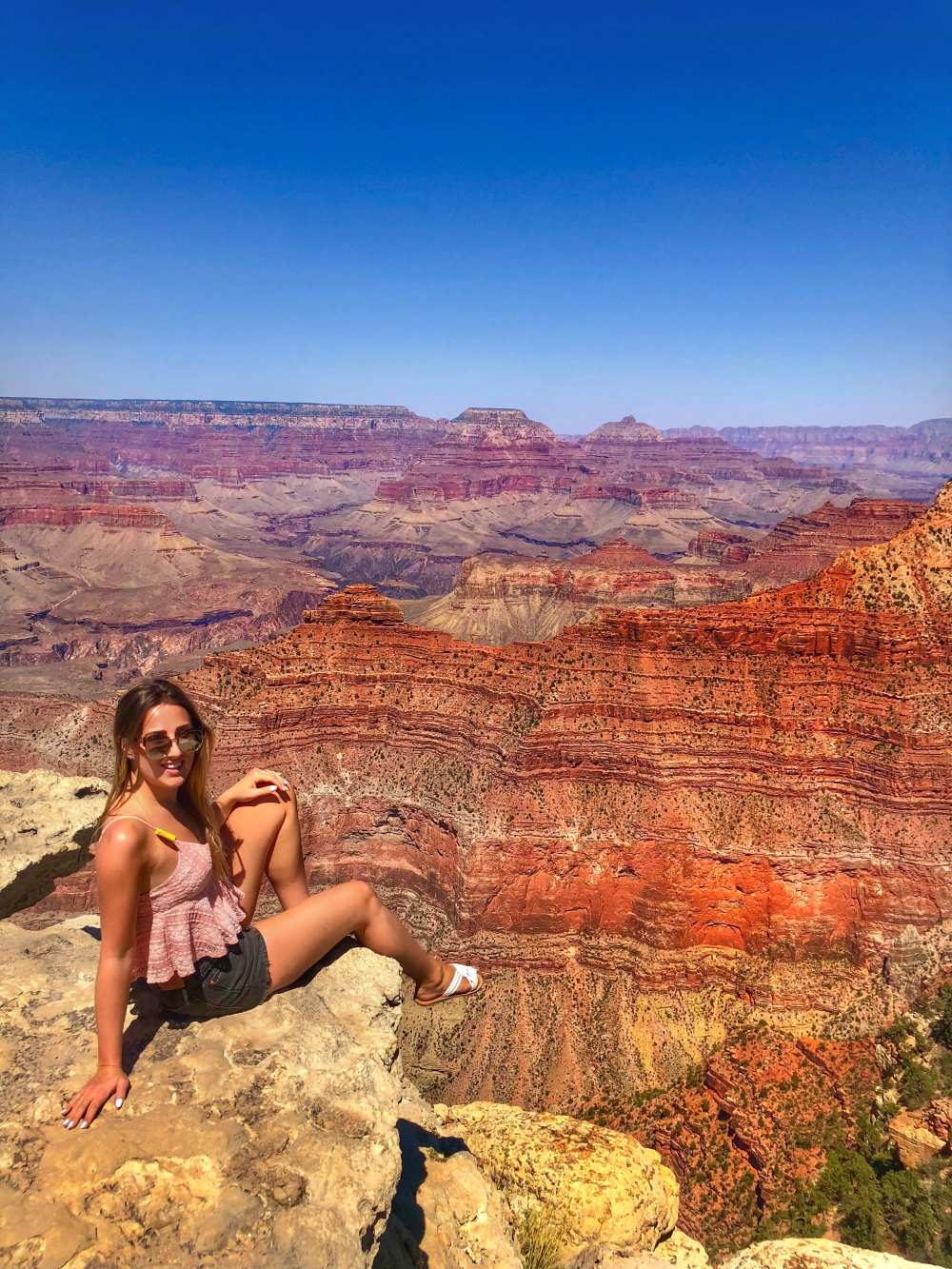 Before long, it was time to get back on the bus and drive across to our next point of the day: Grand Canyon Village.

It was beginning to get incredibly hot, with temperatures reaching 36 degrees Celsius. The tour guide had mentioned good things about an ice cream place in the village and we can see why as the queue was out the door and down the street! But we patiently waited and treated ourselves to a scoop of peanut butter cup and mint choc chip. 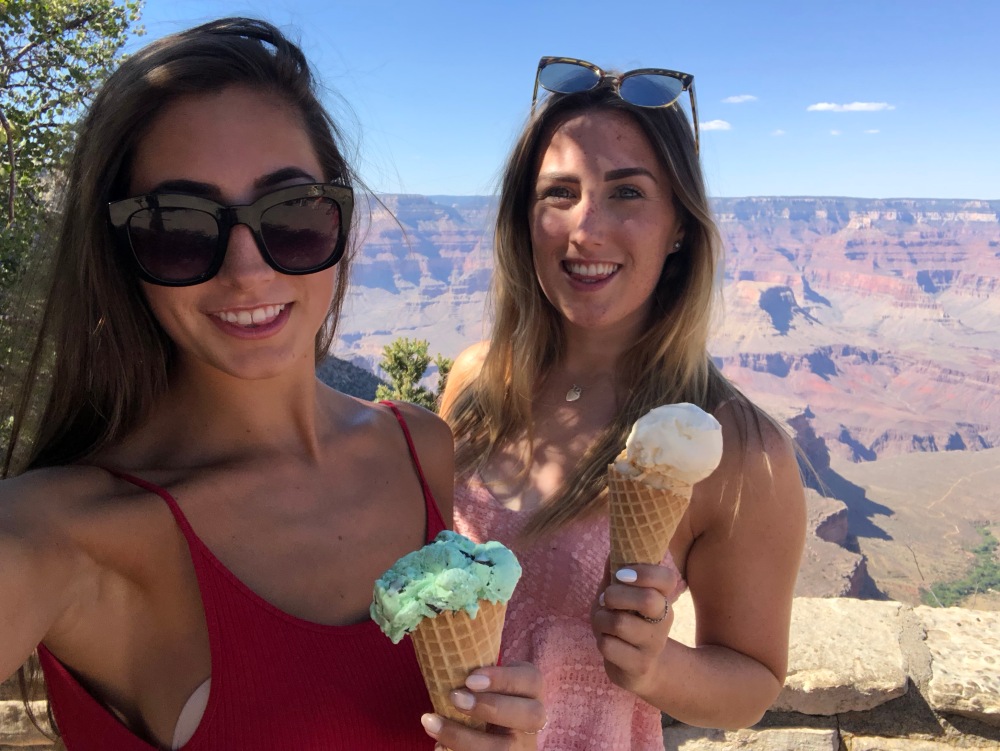 Grand Canyon Village is a census-designated place (CDP) located on the South Rim of the Grand Canyon, in Coconino County, Arizona, in the United States. Its population was 2,004 at the 2010 Census. Located in Grand Canyon National Park, it is wholly focused on accommodating tourists visiting the canyon. Its origins trace back to the railroad completed from Williams, Arizona, to the canyon’s South Rim by the Santa Fe Railroad in 1901. Many of the structures in use today date from that period.

The tour guide said that the views from this point are better, however I disagree I feel we got such better pictures from the first point. Nevertheless, it was completely breathtaking to finally see the Grand Canyon with my own eyes after such a long time. It’s been on my bucket list for years, and to tick it off with one of my best friends was fabulous.