Continuing on our time in Cancun, we woke the next morning and headed for some breakfast before we took a taxi to the nearest harbour. Where we were headed in the direction of Isla Mujeres.

Isla Mujeres is a small island 1,100km2 or 5 miles long just a short 30 minute boat ride from Cancun, and home to a beach that’s earned its title to be included in the worlds top 10 beaches ranking in at number 7. So of course we had to go and visit! A return journey cost $19 and we aimed for the 11:30 boat across.

Isla Mujeres (“Island of Woman”) was a Mayan sanctuary to goddess Ixchel for about a thousand years. In around 1850, the first modern inhabitants moved to the island and established the village of Dolores.

The climate is tropical, with year round hot, humid weather. Peak season is during the winter months when temperatures are cooler. Summer temperatures are sweltering, with blazing sun and highs well over 32 °C (90 °F), although summer visitors (from mid-May to September) have the opportunity to see whale sharks which gather in nearby waters in groups that can contain up to 400 sharks.

I’ve seen whale sharks before, so we weren’t bothered for that. Click here if you want to see what that was like!

On the boat over, the sea crew explained that most people get around the island by golf buggy and they were $40 to rent for the day. A little pricey but we wanted to see as much of the island as possible, and split between the three of us it wasn’t so much. So as soon as we arrived on the island, we went straight to the golf buggy pick up and set off in search of the incredible beach: Playa Norte. 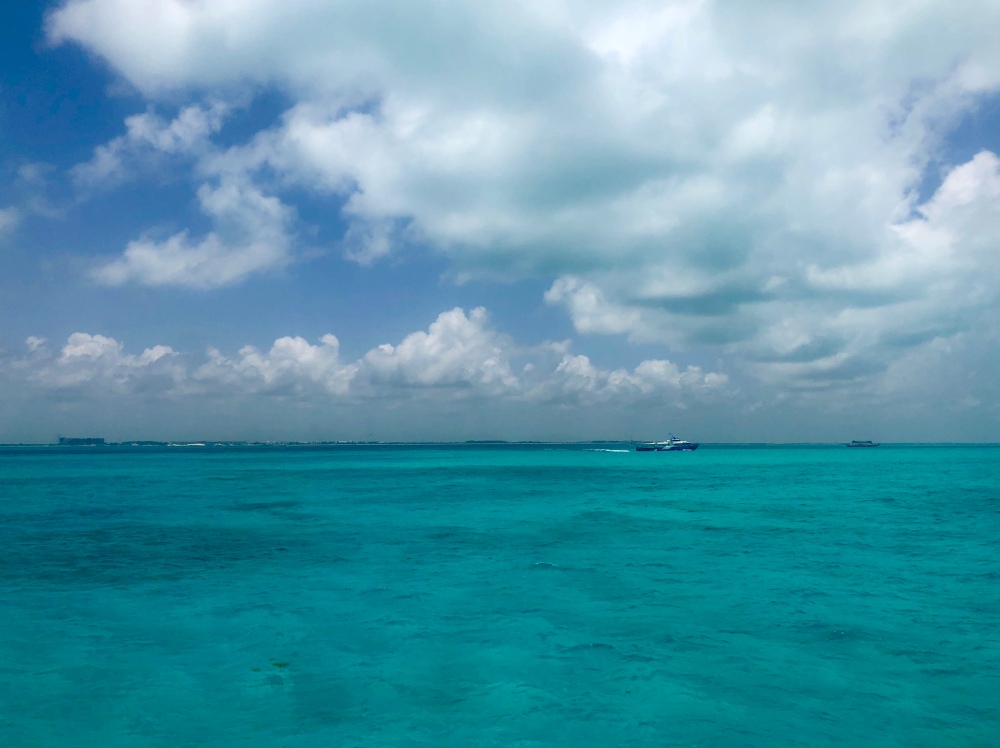 It was actually quite close to where we were, so we parked up for a good hour or so of tanning and taking in the incredible views. Which were so worth it. 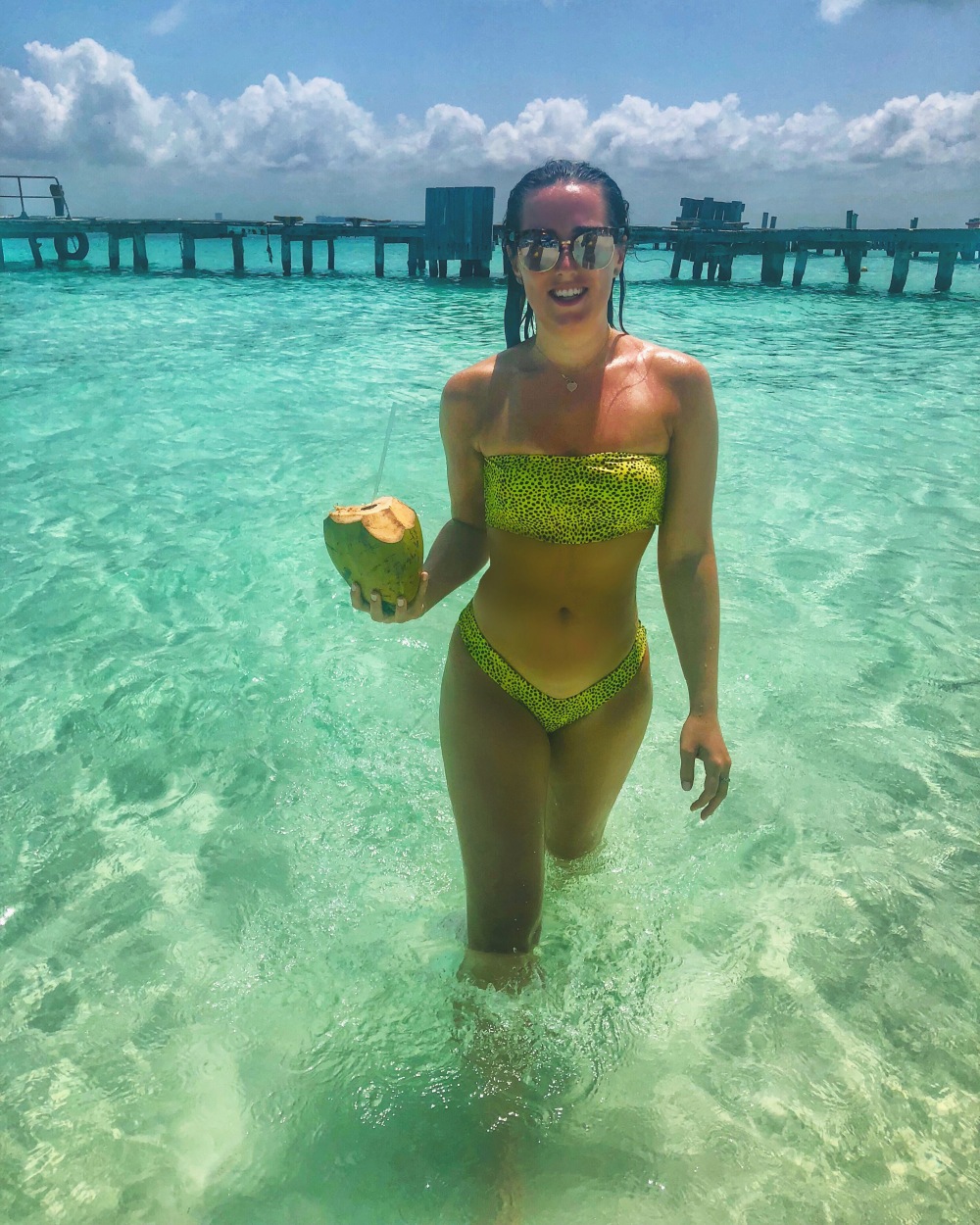 Sipping on fresh coconuts, it honestly felt like the definition of paradise. What more could you want?

Soon after we had explored Playa Norte, we went back to the golf buggy in the direction of the lighthouse at the opposite end of the island.

On the way, we stopped at a turtle farm which is a sanctuary for turtles they have found injured and are rehabilitating them back into their natural environment.

It cost $2 entry which we thought was very cheap, but understandable as it is an incredibly small farm and only takes about 10 minutes of being there to see everything they have on offer. 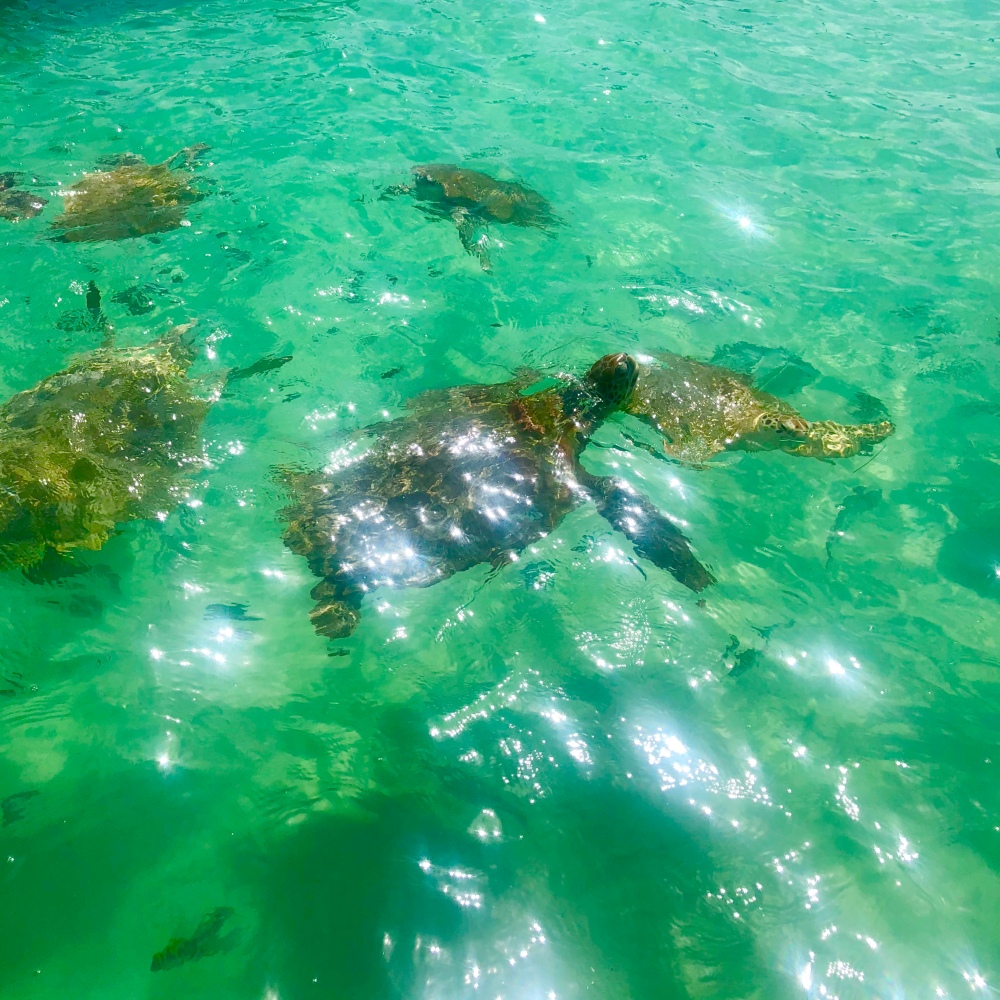 En route to the lighthouse we passed by a place called Garraffon Beach. Now, I wish we’d have known about this from the moment we arrived as this had the most incredible view ever. So much so, we pulled up at the side of the road to admire said view.

When we got speaking to the guy on the desk he told us that it’s actually an adventure park and here you can kayak, snorkel, paddle board, swim, zip line etc. You name it, they had it here and for $50 you could spend the day here doing everything you wanted as much as you want. Which I thought was a really good deal to be fair!

Sadly we only had 2 hours of the buggy left so it didn’t seem viable so we continued on up the road to the Caribbean village where the lighthouse was located for some lunch. 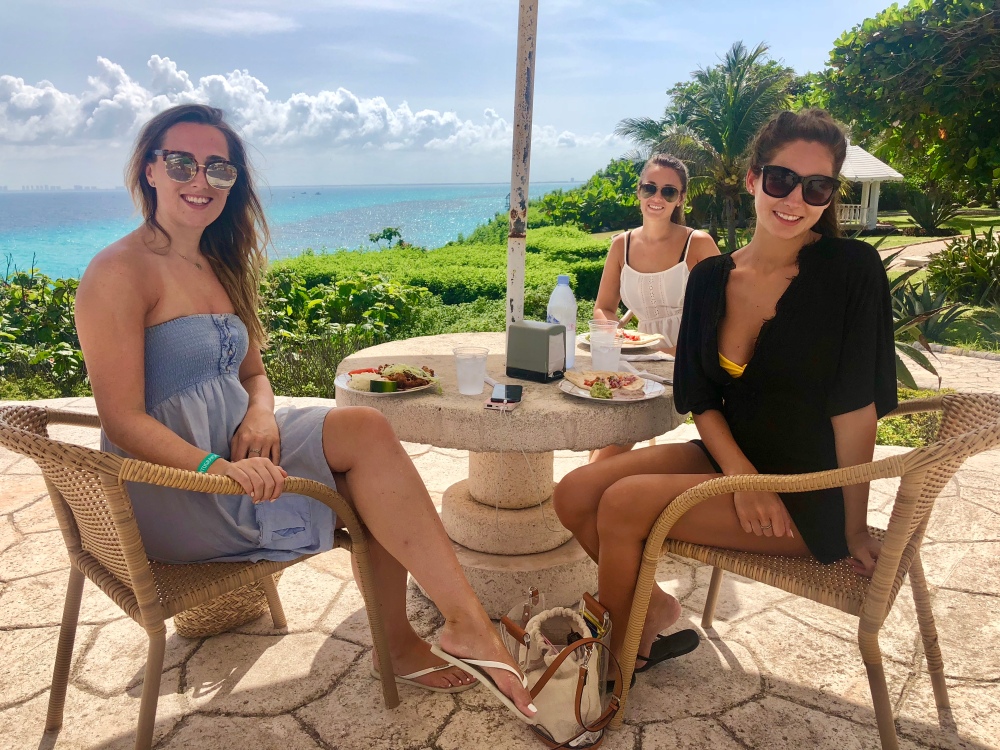 We ate yet more Mexican food. I had fish tacos and we sat in the sunshine admiring the view. There wasn’t actually much to the lighthouse, nor the Mayan ruins which were on the island and you had to pay. So we didn’t bother and took a scenic drive back to the golf buggy rental place.

It was 5pm and still a glorious day, so we went back to the beach for some sundowners and top up our tans before we took the sunset boat back to the mainland of Mexico.

That evening I’d be given a restaurant recommendation by a fellow crew friend who works for British Airways. As they fly to Cancun from London, she said that she and also a lot of the crew loved this place called the Thai Lounge. Craving a change from Mexican food, we decided to give it a go and jumped in a taxi down to the Liverpool waterside shopping complex.

The restaurant was so beautifully designed. It was all outside with water bungalow styled tables to which you were seated with your own group. It was dimly lit which gave a real magical feel to the place, and when we were seated at our table we were given electronic menus so that we could easily see what we were ordering. 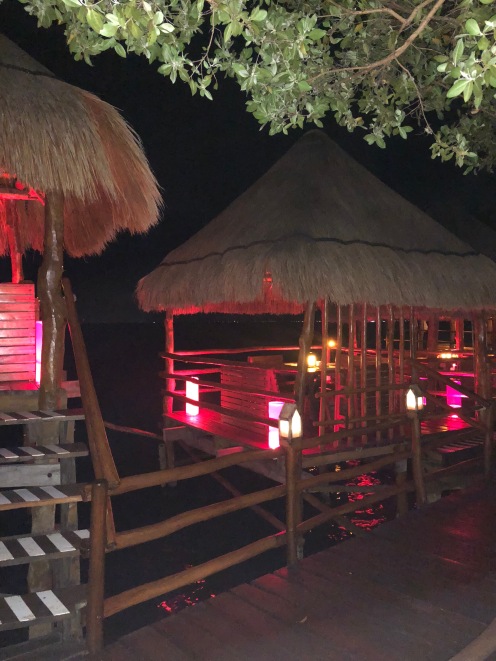 The food was insane. I love Thai food and it really did not disappoint here. The gorgeous setting paired with amazing food and delicious cocktails went down a treat and it was lovely evening with a gentle breeze.

Would highly recommend this restaurant to anyone visiting Cancun, especially as we were able to get mango sticky rice for desert!!

When we paid our bill, the waiter asked if we would like to come and see the restaurants pet crocodile. We thought he was joking, but laid in the shallow waters was their resident croc who comes each day to be fed the left over food!! How crazy! But what a gourmet appetite this crocodile has!!

The next morning was a lazy day after two hectic day trips and we were planning to head to Cocobongos in the evening. 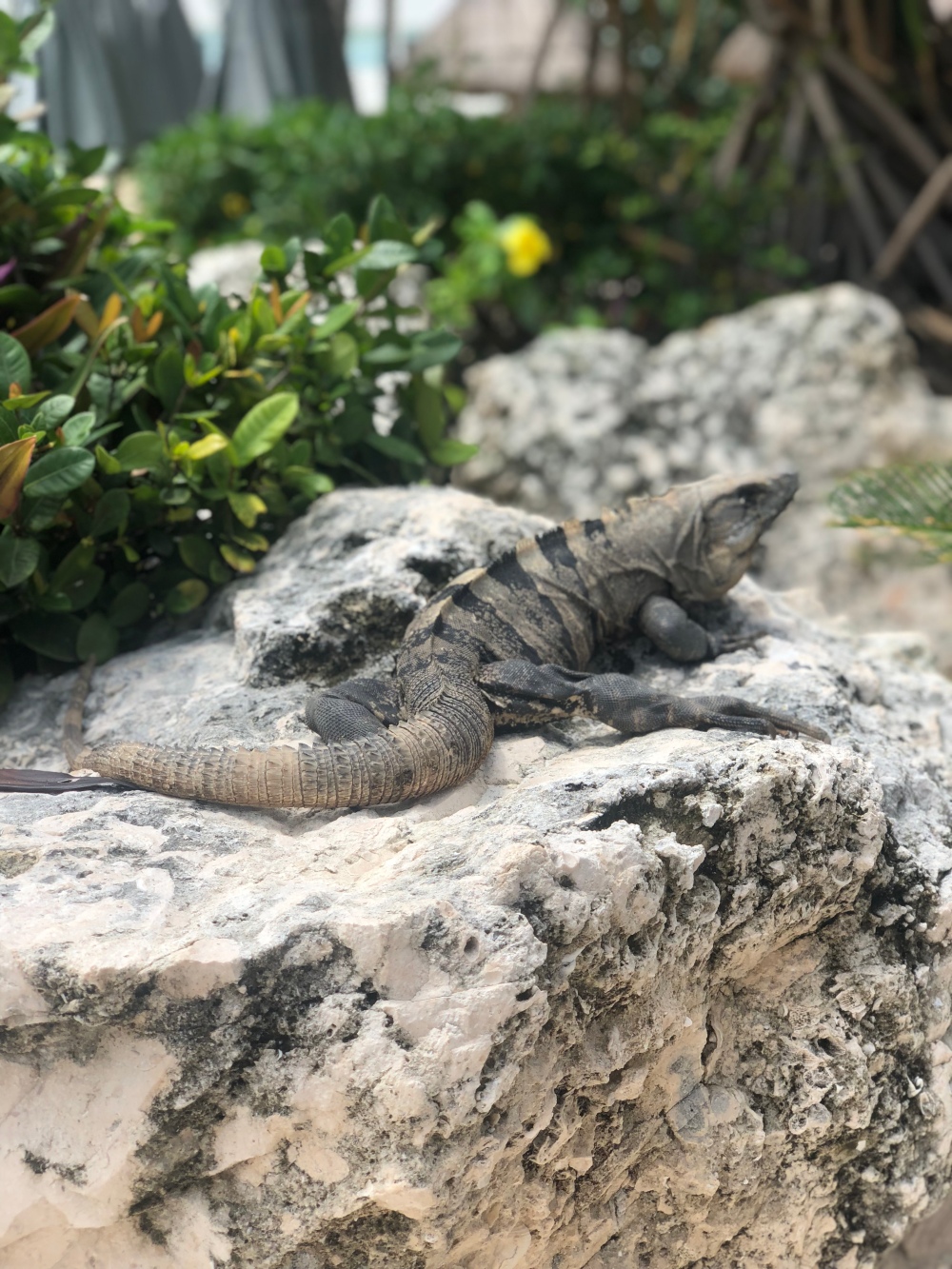 A beautiful lunch in the sunshine of prawn linguine with some sangria went down a storm, and it was a day we all needed to recharge our batteries. 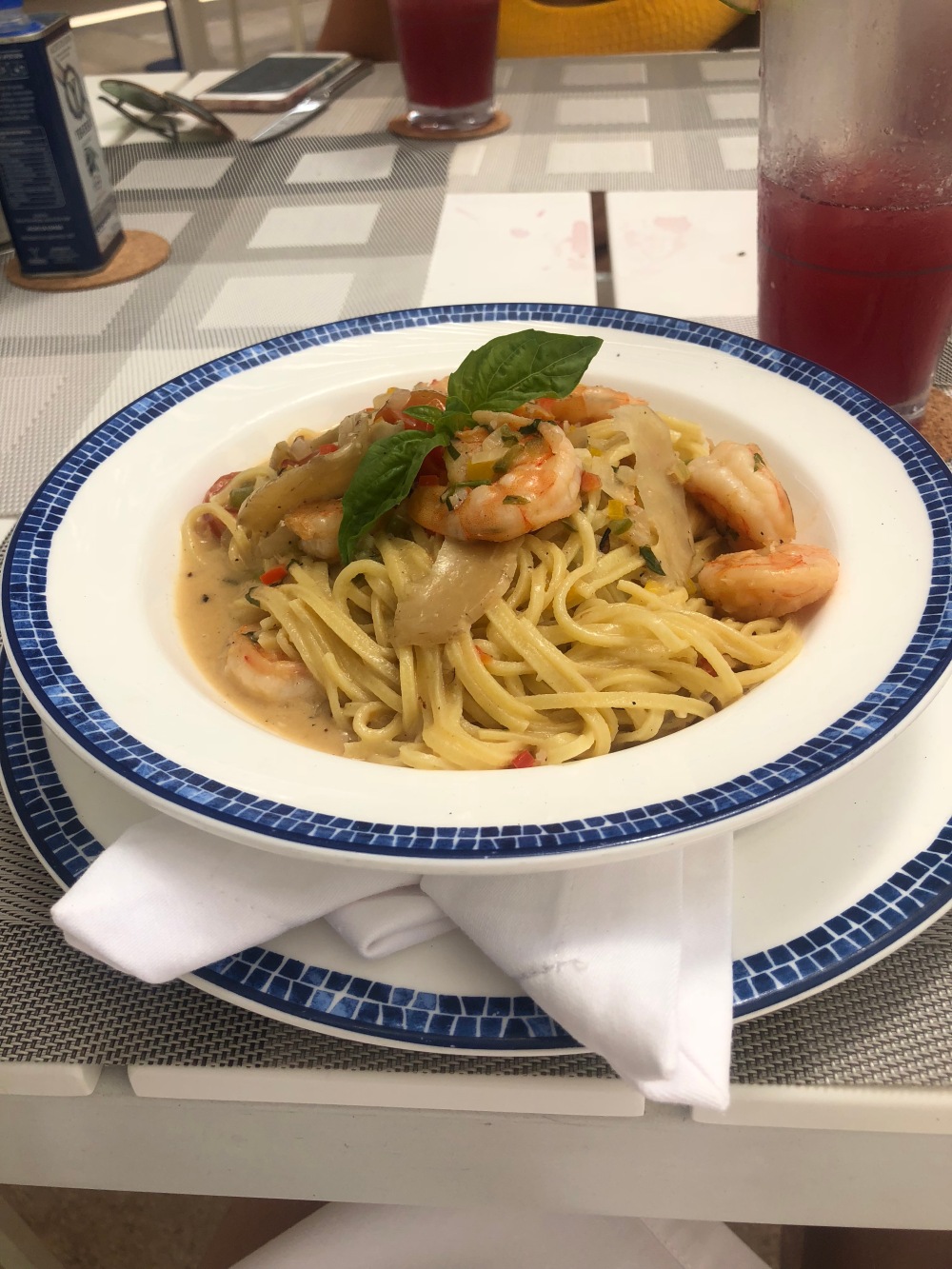 Instead of eating out for dinner we grabbed some pizzas from room service whilst we got ready for our night out and left the hotel around 10:30pm.

Cocobongos is deemed the worlds best night club, and out of every person I’ve known to go, not one of them has said a bad word about it. They’ve actually raved about it. With all this hype surrounding this club, I was worried it might not meet expectations so after a few drinks in a bar outside, we paid $50 to enter.

This may seem a little pricey, but this is a) the worlds best club but also b) an open bar with waiter service. So you can get your moneys worth inside. 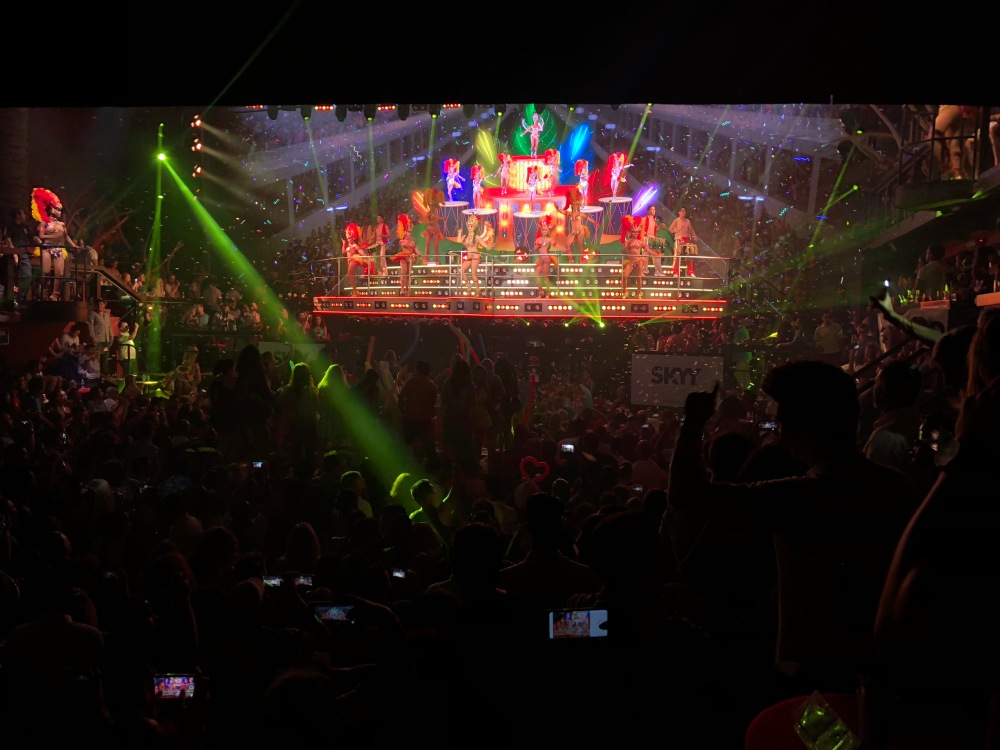 I’m not gonna spoil it for anyone but wow. I completely understand why Cocobongos has the reputation it does. From the music, to the lighting, to the staging, to the dancers, to the acrobatics to the props. There is just so much to take in. It is a complete visual and audio spectacle and everyone of any age must go! We were even stood next to a 50 year old couple from Miami who were loving it!! This guys dance moves were brilliant. 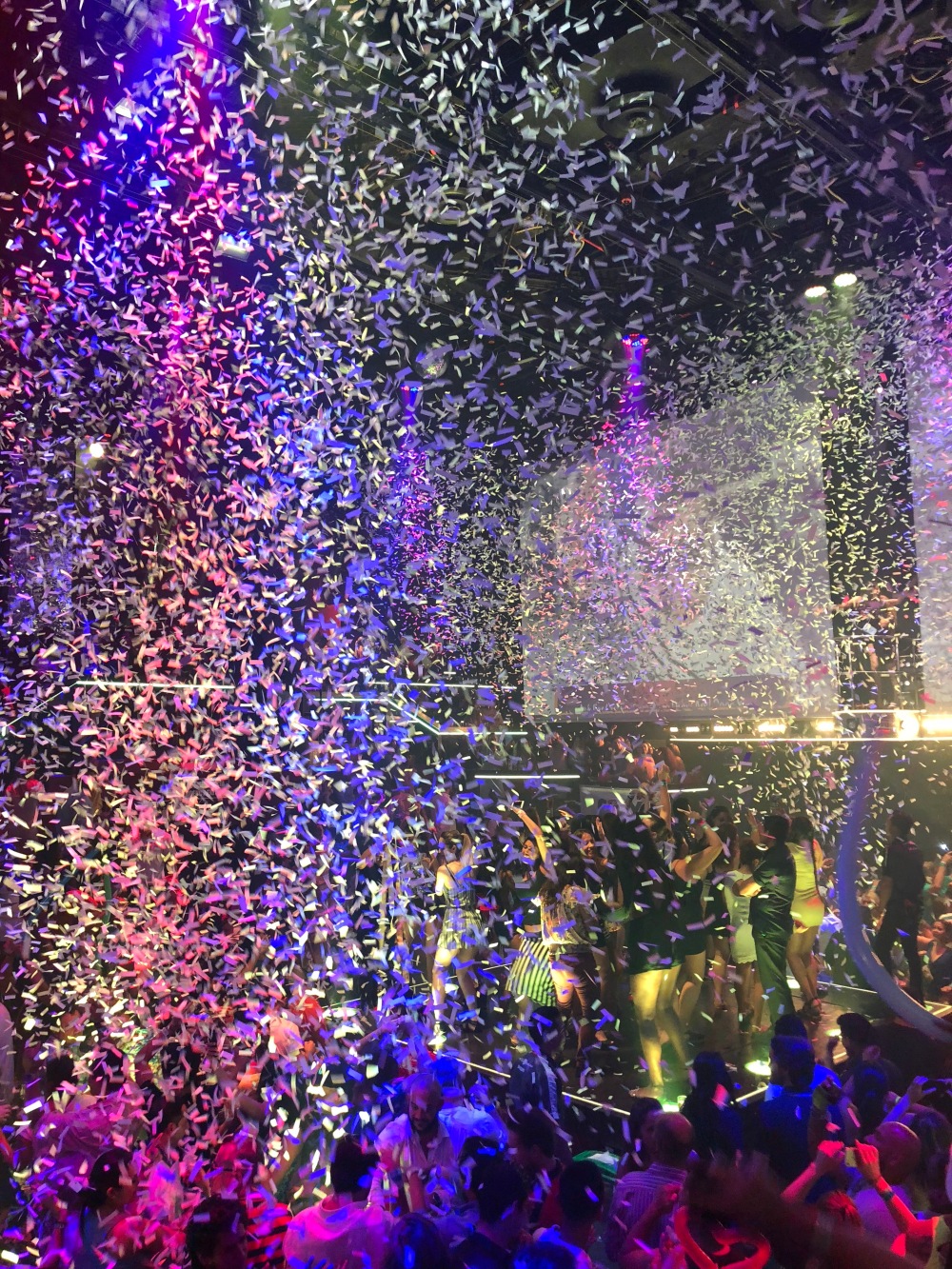 And at the end of the show we were even dragged up onto the stage to take the centre podium for a dance. It was absolutely brilliant. One of the best nights I’ve ever had and will never forget. 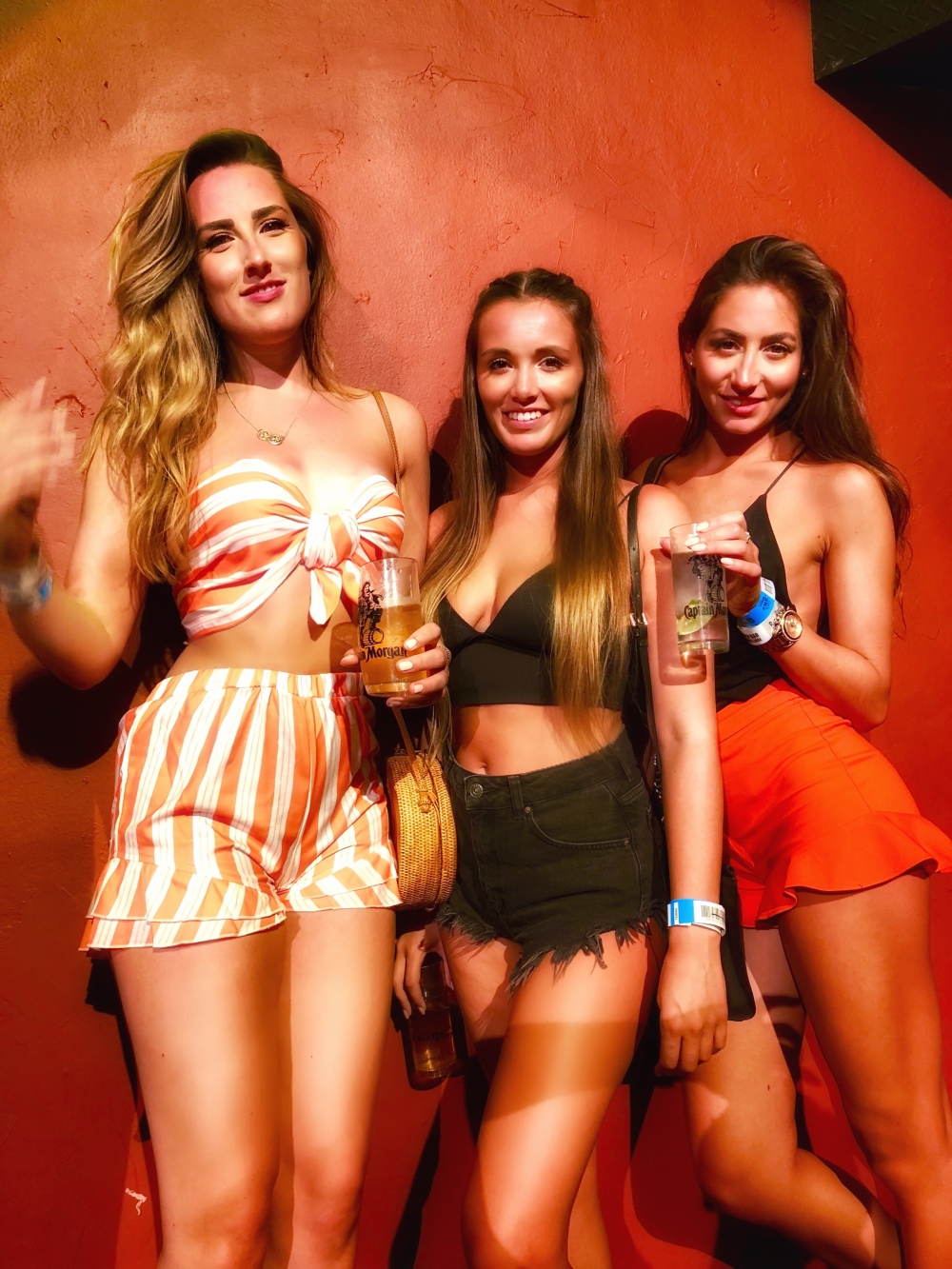 We woke the next morning to our final day in Cancun and yet more gloriously blue summery skies. Feeling a little hungover, we spent the day on the beach until the sun set before we packed up our stuff and got ready for one final dinner before we moved on to Las Vegas.

Mexico was an absolute dream and I loved it way more than I ever expected to. It is the definition of paradise and has a bit of something for everyone. Especially me who can’t just sunbathe for a week straight. If you’re wondering where to head to next, definitely consider going to Mexico and staying in Cancun or if it’s more of a couples holiday go a little further down to either Playa Del Carmen or Tulum.