For anyone who knows me or keeps up with my blog, you may be aware that I have a bit of a love for the hit US show Gossip Girl. I’ve been keen to do a Gossip Girl tour of New York and companies usually charge around $50 per person for this. However, a few people had told me that you were easily able to do it by yourself on foot around the city so I did some extensive research to find all the spots. At the end of my day, and may I add, be prepared to do A LOT of walking, I thought I would post on the best way to tick off Gossip Girl in New York in the space of a day with the best routing. As when I looked into it myself, many people hadn’t given the route for you. If you’re not a fan of Gossip Girl I’d probably stop reading now, and if you are then you’re in for a treat next time you head to the Big Apple. Also please note, there are spoilers throughout this. So if you have somehow been living under a rock and still managed not to watch it all yet, save this post until you have. So here goes… *switches to typing as Kristen Bell*

Hey wannabe Upper East Siders, Gossip Girl here, your one and only source into the best route around New York. Whether you’re wanting to sit highest on the Met steps or feel like Lonely Boy in Brooklyn, this guide will be sure to give you a taste into the scandalous lives of Manhattan’s elite.

1: University of Colombia
The best way to kick start your day, wherever it is you’re coming from, is at Colombia. In season 2 this is where we see Nate attend his freshmen year at college and also later see Blair receive a late admission despite being enrolled at NYU. In season 4, Serena also starts at Colombia much to Blair’s disapproval. 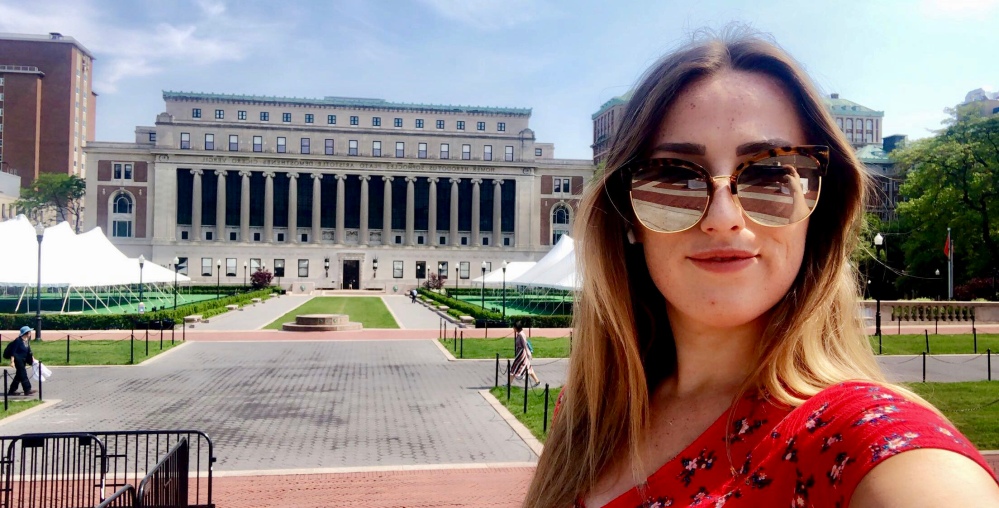 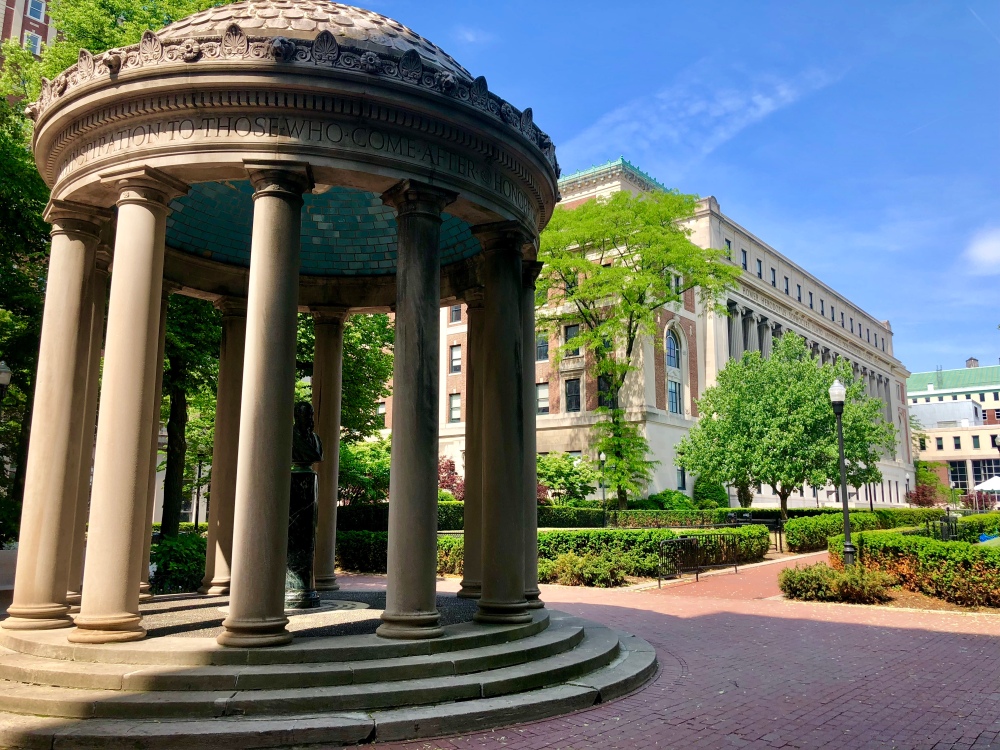 You can also see Hamilton House here where Nate’s girlfriend Juliet is key master and they accept Blair into their “sorority” but not Serena. 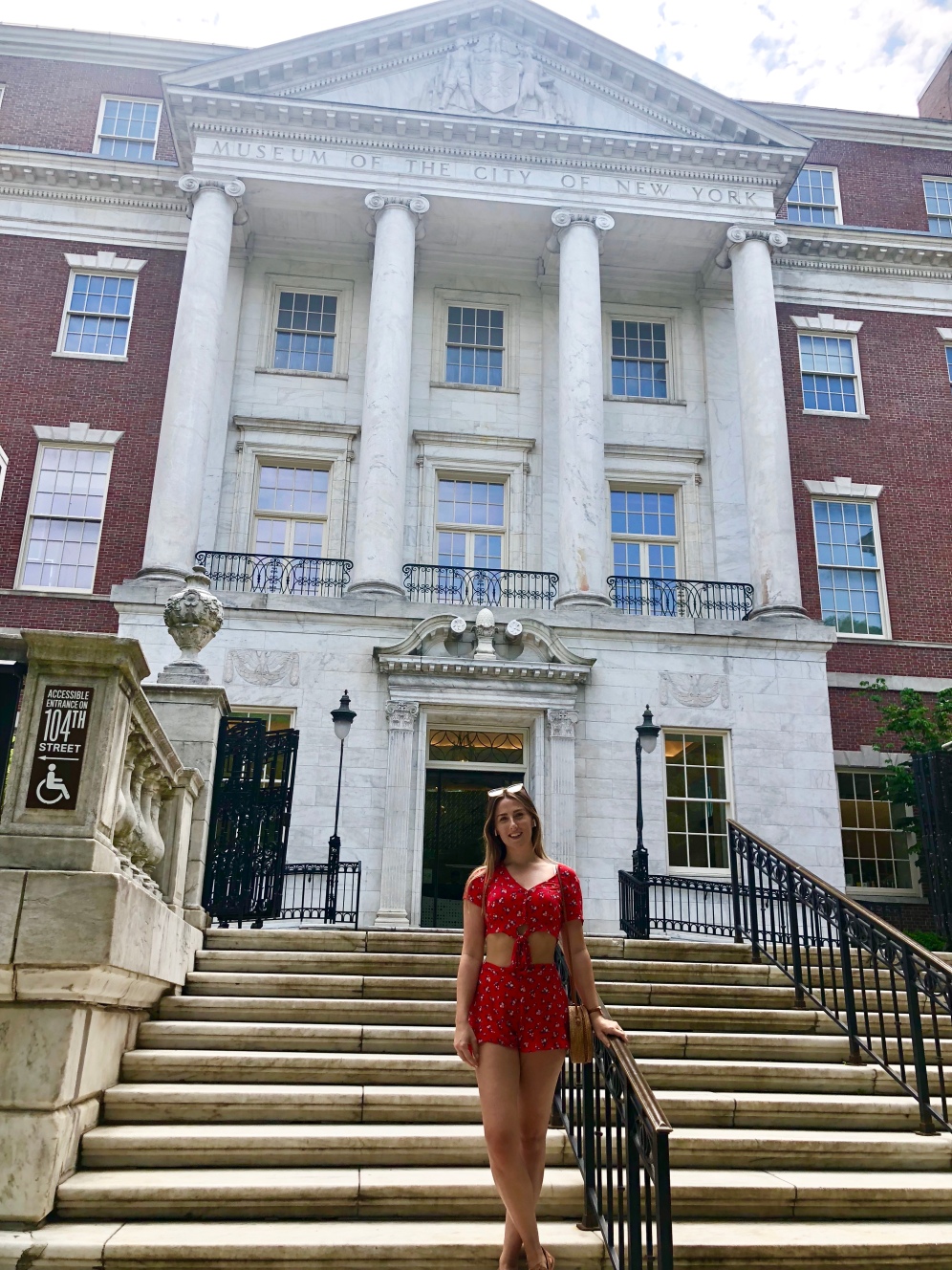 Filming of the outside of the school is actually done at the Museum Of New York so you do not need to enter to get a feel of the school but you can sit and wander the forecourt of the building and imagine what it’s like to be a student of this exclusive private school.

3: Waldorf Residence
Living the closest to Constance is Blair Waldorf. This is not really worth visiting as you don’t really see much of the outside of the building during the entire series of Gossip Girl, but worth noticing as you walk between Constance and The Met Steps.

4: The Met Steps
The Met Steps play a huge part in the hierarchy of Constance with the current queen sitting at the top of the steps and no else sitting above her. Both Blair and Jenny are queen during their time at Constance and many a lunchtime we see them sat on these steps located at the Metropolitan Museum of Art. However don’t be fooled into thinking this is close by to Constance St Jude’s as they’re actually a 1.1 mile walk down 5th Avenue from each other, and I highly doubt that Blair Waldorf walked there and back each day in heels, do you?

5: Archibald Townhouse
Home to the Archibald’s until Nate’s father is caught for embezzlement, Nate has a prime home location just off 5th Avenue right by Central Park. Unfortunately you can’t go inside the townhouse as this is someone’s actual residence but you are able to view the outside of the property which will bring back memories of poor Nate when he slept rough in his apartment that was taken from him. It is a gorgeously styled townhouse, however it is quite difficult to get a picture of the entire building or yourself stood in front of it as it is a very narrow street with cars parked on either side of the road and there is also scaffolding opposite.

6: Bethesda Terrace
Probably remembered as one of the most iconic backdrops from Gossip Girl and also undoubtedly one of the best scenes, this is where Chuck and Blair finally get married (still squeals as they’re my favourite tv couple ever, LOVE THEM).

As you stroll through Central Park (an absolute must when in New York) head towards Bethesda Terrace for gorgeous views of the skyline, the boathouse and of course the glorious wedding scene.

Not only did we see Chuck and Blair marry here, but also where Blair read Serena the letter she never managed to send whilst she was away at boarding school in season 1, episode 3. In season 6, episode 6 we see Dan and Serena escape on a Vespa from TMZ paparazzi and then finally the famous wedding scene in season 6, episode 6. 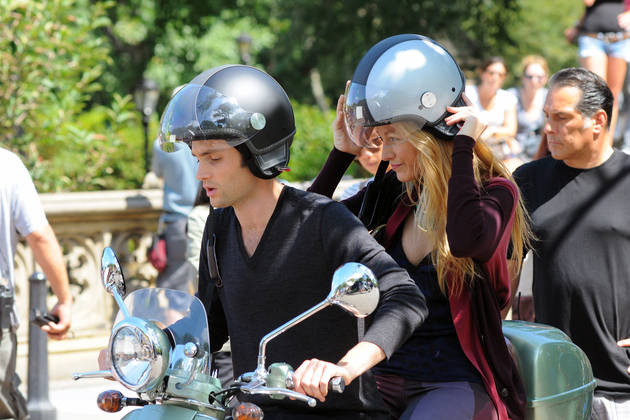 7: The Empire
The very first purchase from Chuck Bass as a hotelier, The Empire is an actual hotel located on the opposite side of Central Park to a lot of Gossip Girl locations on 5th Avenue. As you’ve just crossed Central Park for Bethesda Terrace, take a little detour to The Empire where you can wander inside to the hotel’s cocktail bar to sample aptly named Gossip Girl styled cocktails such as ‘I’m Chuck Bass’, ‘Who Is Charlie Rhodes?’ and ‘Dorota’s Secret’. You’ll have already done a substantial amount of walking by this point so it will be nice to sit and quench your thirst a little.

8: Feed The Ducks In Central Park
One of Blair’s favourite pastimes and when she wants to do some “charitable work” is to feed the ducks in Central Park. And as you leave The Empire and wander back through Central Park towards the South East Entrance, make sure to take some bread with you, or have your version of Dorota carry it for you. 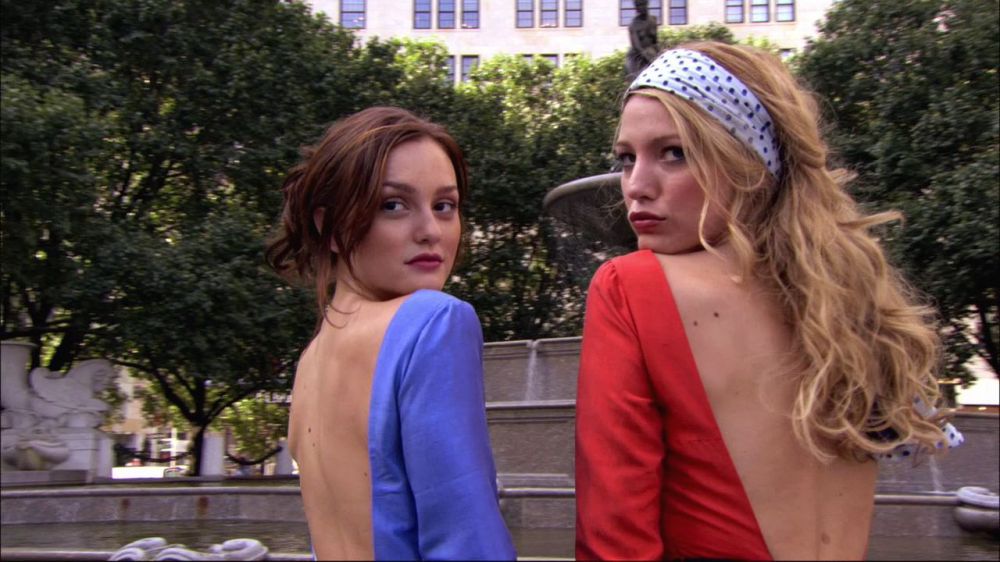 Optional: Dylan’s Candy Bar
I write here optional as Dylan’s Candy Bar appears in season 2 episode 15 with Dan and Vanessa searching for Nate’s anniversary present. It is honestly just a candy store which does have an excessive amount of different candies, but this stop is quite out of the way and doesn’t really add much to the Gossip Girl Tour of New York. If you want to go, go. But I wouldn’t say you’re missing out on anything if you don’t go here.

10: 5th Avenue
Take a stroll down the length of 5th Avenue, home to more stores than you could ever imagine. A favourite of Blair’s is Henri Bendel, pop in and see if you can find the perfect B style headband. Then move on down to Harry Winston, I’m sure it’s every girl dream after watching Gossip Girl to receive their very own Harry Winston ring when their significant other gets down on one knee, but as you wander past, you can picture Chuck picking out the perfect ring for Blair starting at around $24,600. Not much, huh? 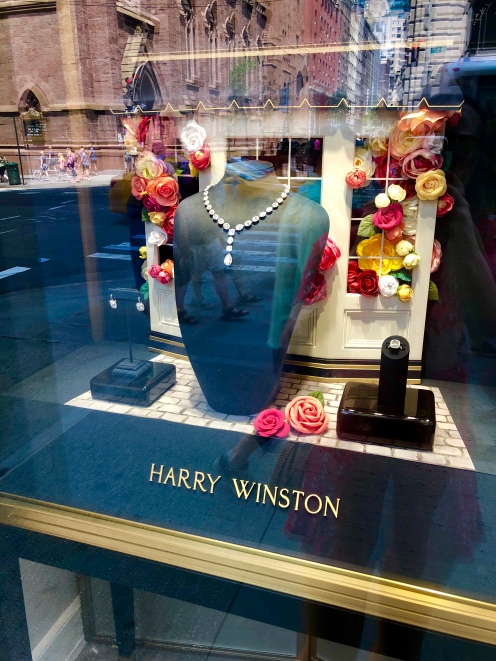 11: Van der Woodsen Home
Just off 5th Ave is the home of the Van der Woodsen’s at The Palace. This hotel is actually called The Lotte New York Palace but the doormen are so wonderful and welcoming and told me I could wander the hotel when they asked “Are you here for Gossip Girl?” If only you could see the suite in which the Van Der Woodsen’s resided.

There’s also a great little place for lunch here if you’re feeling peckish and wanting to do some people watching.

12: Butter
A famous jaunt the Upper East Siders like to visit, it first features in season 1 episode 14 where we see Blair interfere in Little J’s birthday and results in everyone ditching Jenny to join Blair at Butter. I personally didn’t stop in myself but reviews online seem to rave about incredible food and understand why it is mentioned a lot by Blair and Serena.

13: Grand Central Terminal
This is where we kick off the entire series of Gossip Girl. Remember that very first blast from season 1 episode 1? 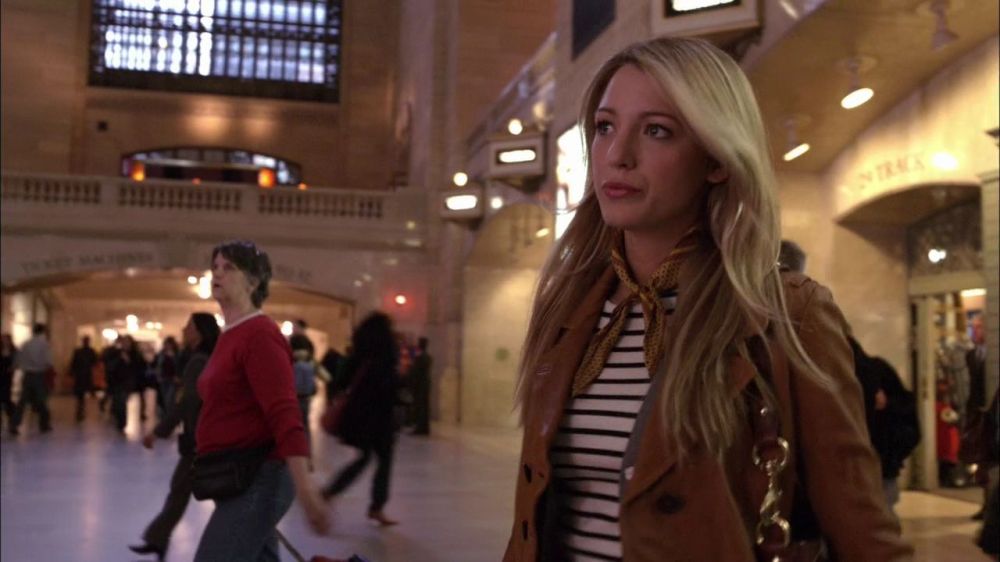 “Hey, Upper East Siders, Gossip Girl here, and I have the biggest news ever. One of my many sources @Melanie91 sends us this. Spotted at Grand Central, bags in hand, Serena Van der Woodsen. Was it only a year ago our “it” girl mysteriously disappeared for “boarding school”? And just as suddenly, she’s back. Don’t believe me? See for yourselves. Lucky for us, @melanie91 sent proof. Thanks for the photo, Mel” 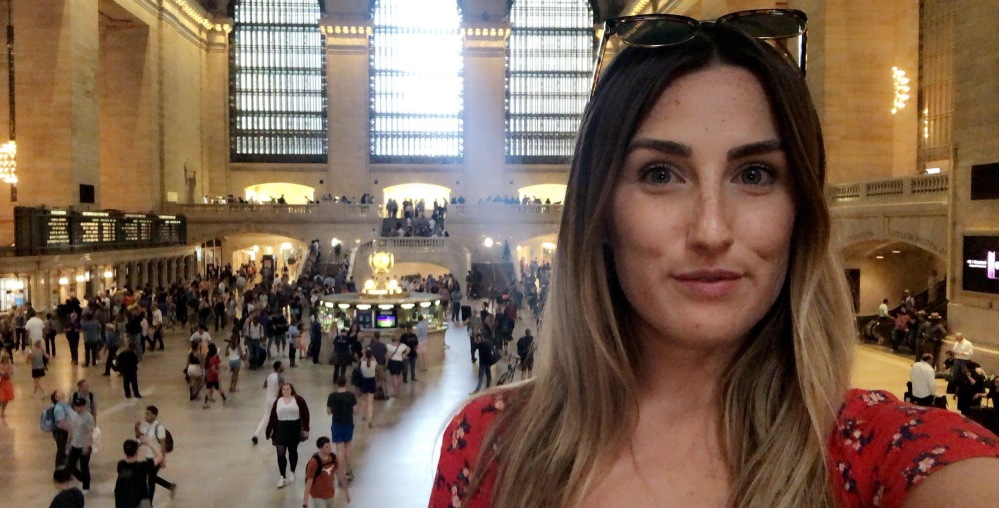 A must see when in New York anyway for its incredible architecture, grand design and features in many films and tv shows but here you can imagine to be Serena as she’s spotted for the first time after she ran away to boarding school.

14: The Campbell
This dimly lit trendy bar is featured in season 3 episode 12 when Serena is seen to be dancing on the bar in front of Nate when they betray Blair. 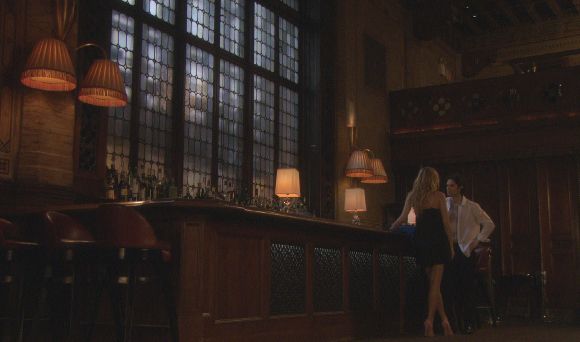 A great place to stop for a drink with their wide variety of cocktails. I could have easily spent the afternoon in here after a busy day shopping. Oh to lead the life of B or S.

15: Empire State Building
Famous in its own right for incredible views of New York City and ariel views of Central Park. Not only this, but this is the place where Chuck waited for Blair with a bunch of her favourite flowers; peonies in season 3 episode 21. A heartbreaking moment to watch, if only I had Chuck Bass waiting for me whilst I made it to the top! 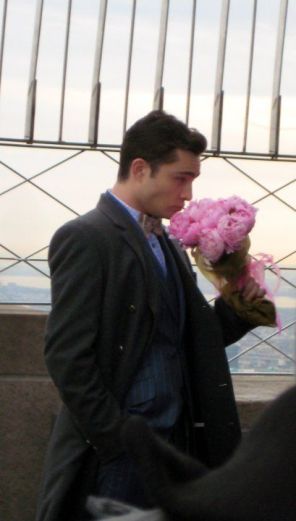 I accidentally went to the Top Of The Rock at the Rockefeller Centre instead when I just visited recently, which gives similar views and also incorporates the Empire State Building into the backdrop too. Not Gossip Girl related but if you wanted to see where Chuck waited from up high, this is where you can do it.

16: Babycakes NYC
This is the spot from season 1 episode 9 where Dan bumps into Serena in attempt to stop her getting in the car and results in him dropping his cakes in the street.

17: Barrio Chino
Just across the street from Babycakes is Barrio Chino another bar for if you’re feeling thirsty. In season 1 episode 9 we see a flashback of Serena stumbling out of a bar on Thanksgiving and into Dan Humphrey. A very small section from the series, but one that kept popping up on my must see Gossip Girl searches.

18: The Humphrey Loft
Ending the tour of New York is at the Humphrey loft, right down in Brooklyn much to Blair’s disgust. You can’t venture inside, but you do get to see the view that we do see regularly on Gossip Girl of the loft right underneath Brooklyn Bridge. From the last stop at Barrio Chino or Babycakes whichever you decide to do, as you’re probably incredibly tired of walking now, you can take the subway from Delancey St and take the orange F line down to York Street and then walk a few minutes towards the loft. 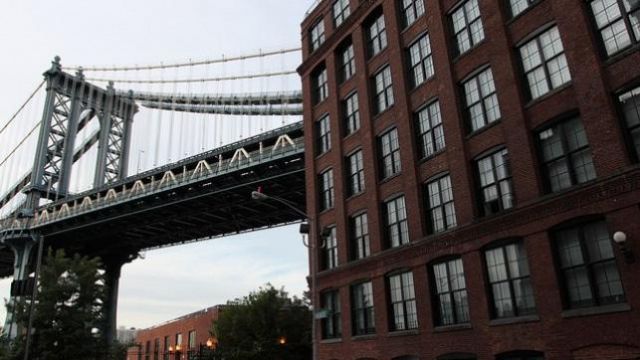 And like all good things, they must come to an end. It may all be over for the Upper East Siders but for you, you can revel in their footsteps, whilst still wanting to get in.
You know you love me.
XOXO Gossip Girl