I’ve only been to Abu Dhabi once since I moved to Dubai back in 2015 and it was to meet my uni friend Riki for lunch whilst he was on holiday. I really need to, but also want to explore more of the seven Emirates of the UAE, so with my mum in town, I thought it would be a great idea to take a day trip to the capital city together.

We took the public bus over to Abu Dhabi. It takes about an hour and a half from IBN Battuta across to central Abu Dhabi and costs just 25 dirhams (£5) each way.

We arrived just after 10:30am and our first stop of the day was over to Emirates Palace. Emirates Palace is a five star luxury hotel which opened in 2005 and cost US$3 billion to build.

Emirates Palace consists of 394 residences, including 92 suits and 22 residential suites. The residences are spread over two wings as well as a primary central building. The majority of the suites are furnished in gold and marble. The main primary building houses an expansive marble floor and a large patterned dome above, picked out in gold. The penthouse floor has six Rulers’ Suites which are reserved exclusively for dignitaries, such as royalty.

It’s a popular tourist attraction for the beautiful architecture and it’s incredible decadence but also people stop by for it’s famous 24 carat gold coffee they serve.

Priced at 75 dirhams (£15) each, it’s probably the most expensive coffee I’ve ever drank, but it was delicious and served with a deliciously chewy date, a dark chocolate disc and a small glass of water.

We initially sat outside in the courtyard but with summer rapidly approaching, we moved inside after about 5 minutes which I’m so glad we did, as there is no way I could have enjoyed a coffee in the baking hot 38 degree heat.

Coffees drank and we made our way over to the Sheikh Zayed Grand Mosque. It is the largest mosque in the country, and is the key place of worship for Friday gathering and Eid prayers. During Eid it may be visited by more than 41,000 people.

The Grand Mosque was constructed between 1996 and 2007. It was designed by Syrian architect Yousef Abdelky. The building complex measures approximately 290 m (960 ft) by 420 m (1,380 ft), covering an area of more than 12 hectares (30 acres), excluding exterior landscaping and vehicle parking.

The project was launched by the late president of the UAE, Sheikh Zayed bin Sultan Al Nahyan, who wanted to establish a structure that would unite the cultural diversity of the Islamic world with the historical and modern values of architecture and art. His final resting place is located on the grounds adjacent to the complex.

I was pleasantly surprised to find that entry to the mosque was free, and upon arrival after going through security checks we were given abayas (full body covers) to comply with the rules of Islam with the covering of your head. 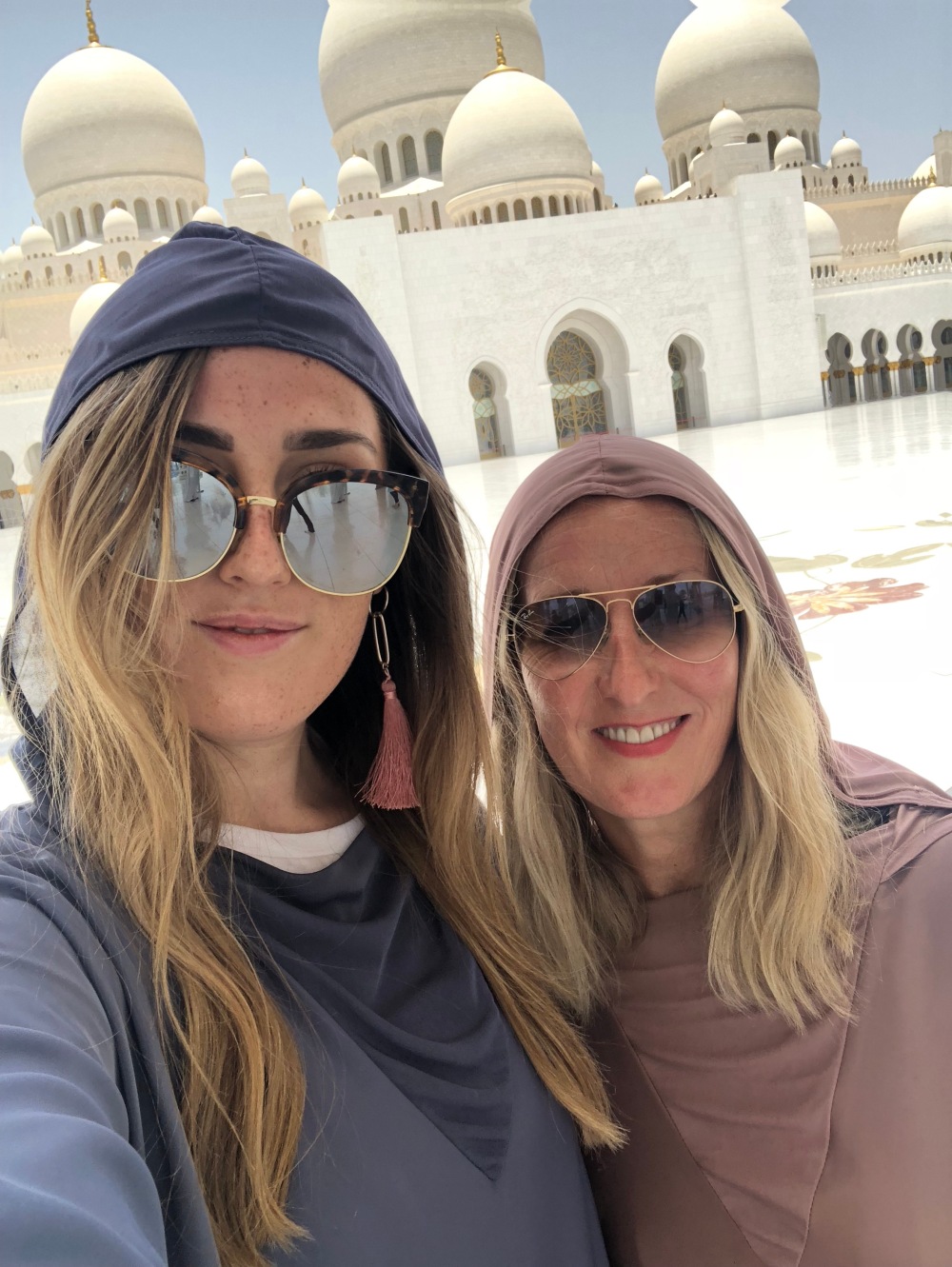 We hadn’t even entered the mosque yet but already the sheer grand scale of the mosque was incredibly impressive. On this scorching hot clear day, the mosque stood proudly glittering in the sunshine and looked stunning. I can only imagine how it must be to visit the Grand Mosque as your place of holy worship.

Just before we actually step foot inside the mosque we had to remove our shoes. Which actually proved quite difficult on the tiles which were scolding the soles of your feet. You could see many people dashing to the comfort of the shade. 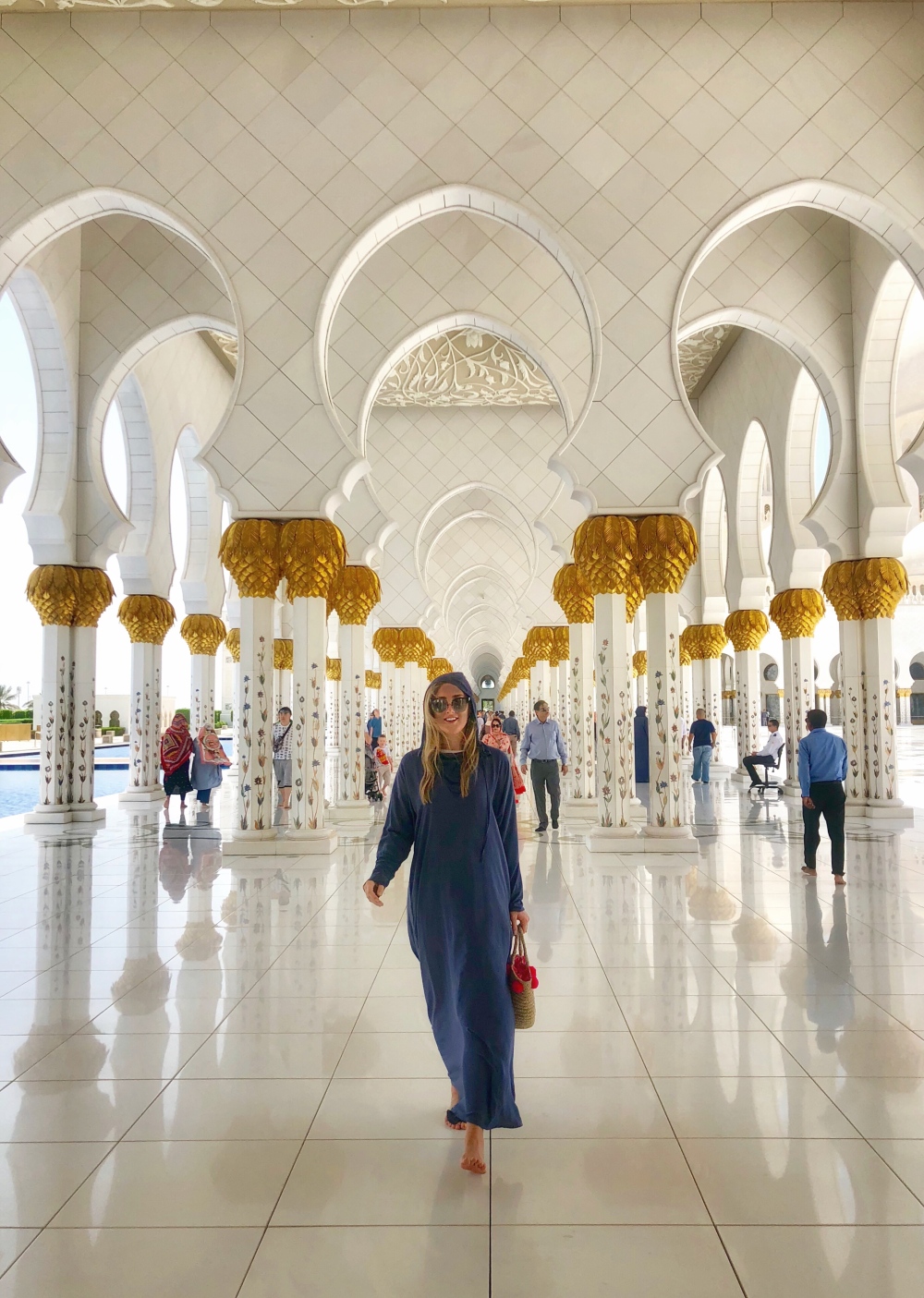 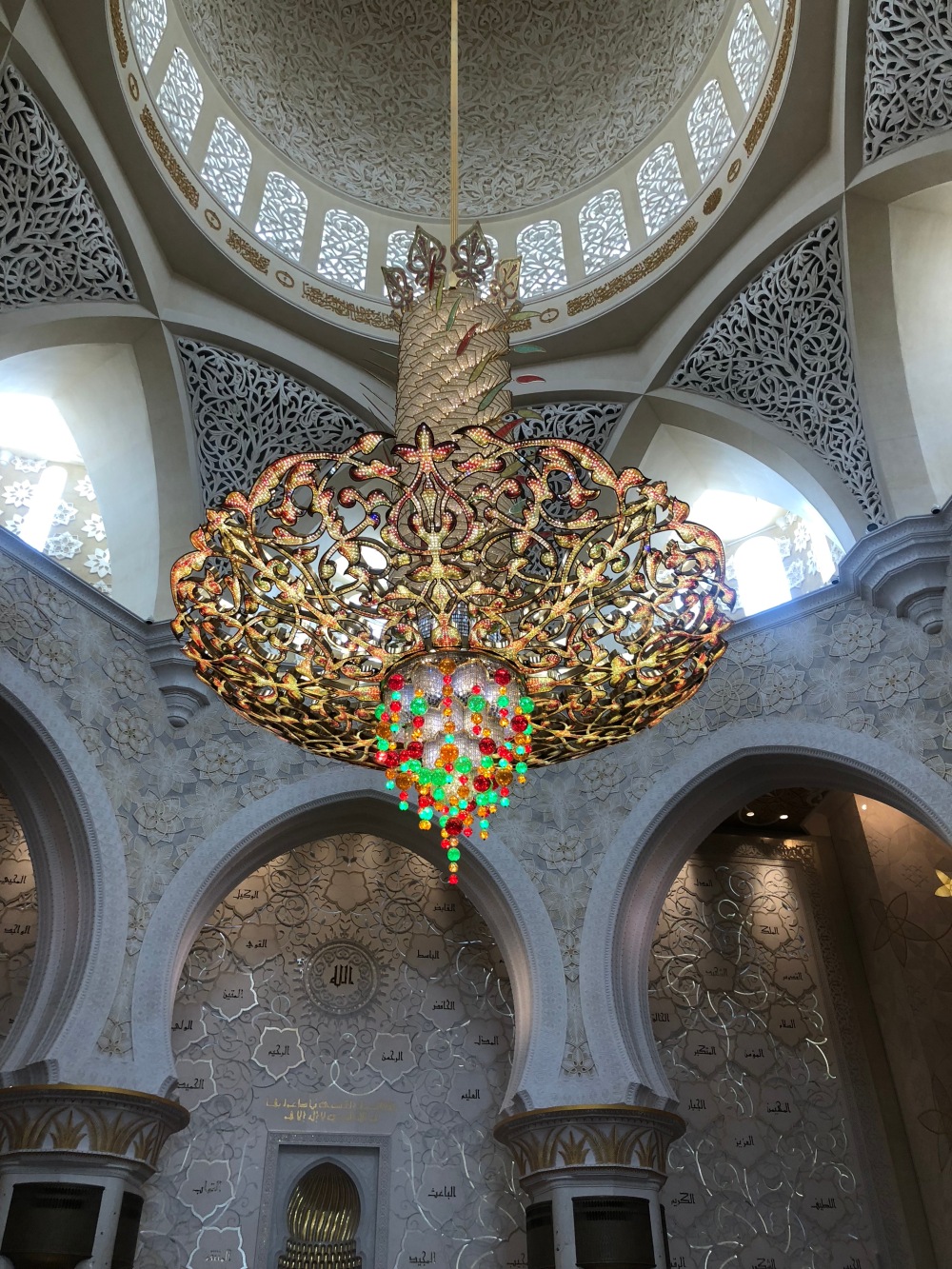 We were at the mosque just short of an hour before it closed for visitors at 1pm for its Ramadan timings.

Feeling peckish for something to eat we wandered across to a mall close to the coach station hoping for some lunch. However the majority of things were closed inside for Ramadan and we only found a McDonald’s, so it went from lavish expensive coffees to a quick cheap McDonalds! What a difference, huh? Then a little browse before we took the coach back to Dubai to be home just after 5pm.

It was a lovely day out in Abu Dhabi exploring with mum, I just need to visit more of the seven Emirates now!