Without even asking, my roster fell in such a way that I was able to join my Mum, Dad and Sister for a few days skiing. With a midnight landing meaning I had all of Tuesday off, followed by 3 days off and then a late departure on the Saturday I would get a few ski days in with them providing the standby loads were okay. I managed to squeeze one of the last few seats onto the 3am flight to Munich. The first time I’ve managed to actually fly out to Munich, as previously I’ve had to go via Prague and Vienna.

Landing into Franz Josef Strauß International at 6:50am, I disembarked as quickly as I could being sat at the back of the aircraft and made my way to the train station to purchase a ticket right the way across to Taxenbach. Usually my Dad comes and gets me from Salzburg but to not eat into their ski day I said I would take another train to the closest place I could get to. However it was much more costly and much more time consuming (for me) in the end, so I won’t be doing that again haha! 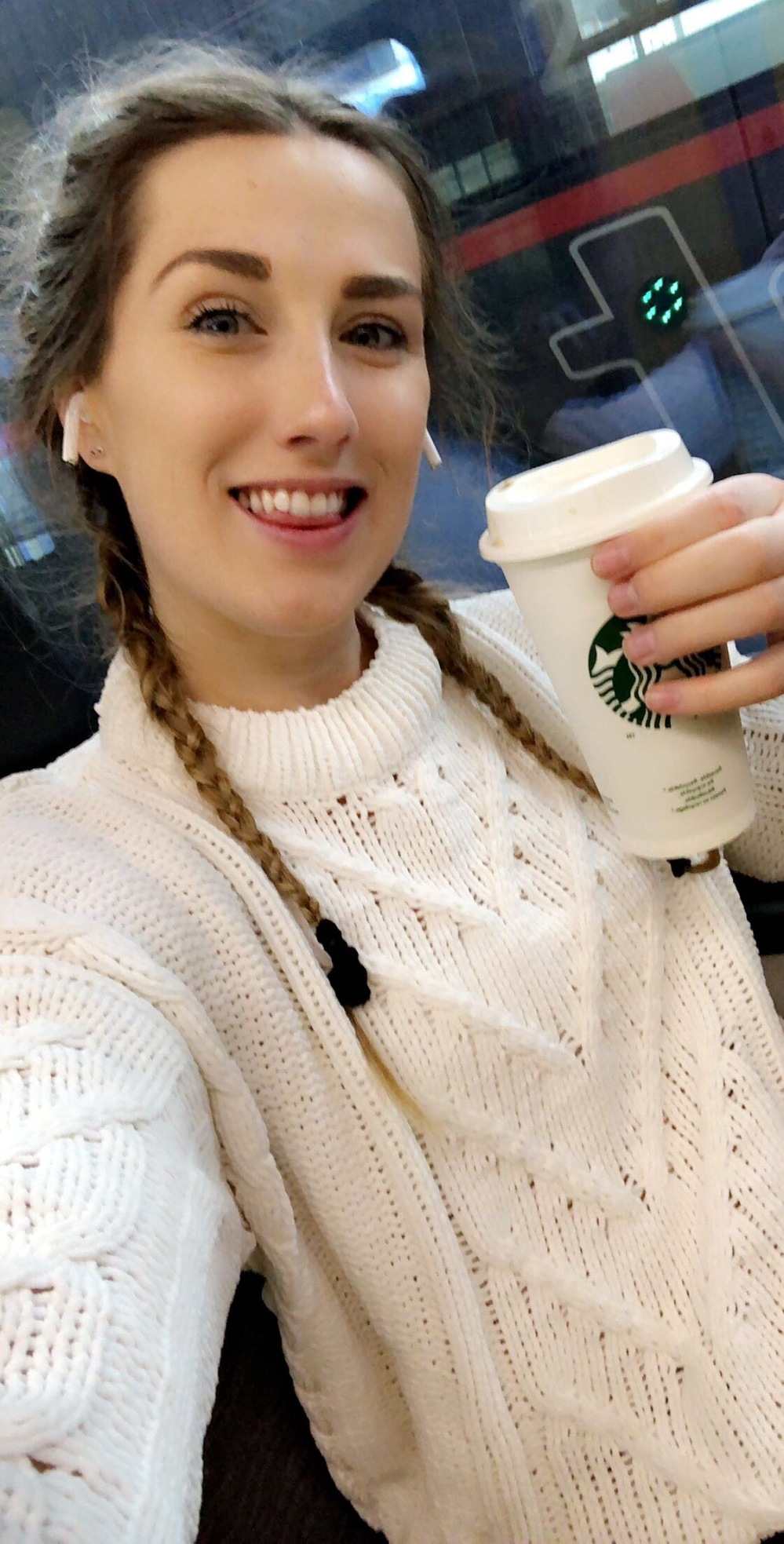 Getting straight of the train, I threw my luggage in the boot and my Dad had brought all my ski stuff for me so I changed quickly and squeezed my feet into my ski boots and headed straight up the mountain. Talk about commitment, I hadn’t stopped from leaving my hotel in Heathrow to reaching the foot of the mountain. Ah well, it was lunch time and I was starving and we met my mum and sister in one of our favourite mountain side restaurants for big bowls of goulash soup.Time to hit the slopes but sadly the weather wasn’t great and the fog was really rolling in on us. Not letting it get us down, we persevered and got in a solid afternoon of skiing. You can see from the picture below how bad the visibility was!

After a good couple of hours we made our way across to the other side of the mountain for some Aprés Ski time! We have earned it after all!

Back to change for the evening and I couldn’t wait to take all my work make up off from the day before! It’s all well and good this world travelling, but after 30 hours on the go I couldn’t wait change. We’d decided to eat in the village at a restaurant called The Schönblick and I had my favourite beef and mushrooms with tagliatelle and a lovely glass of white wine. 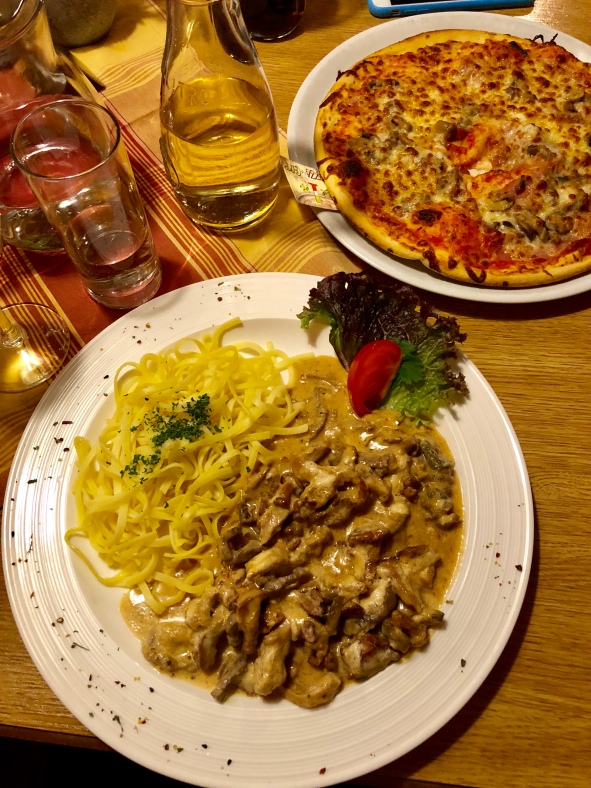 Finally time for bed and I was exhausted, I couldn’t wait to pass out and in an actual bed!

The next day we had decided to head to Bad Hofgastein, we hadn’t skied here in a few years now and upon checking the weather it was going to become cloudy with snow just after lunchtime.

So we packed our swim stuff too just in case we decided to come down the mountain due to adverse weather conditions and head to the thermal spa instead. In the words of my mum “fail to prepare, prepare to fail”.

Starting the day off was glorious with the sun shining and only a few clouds in sight. We were even able to sit outside for our morning coffee stop!

Soon lunchtime approached and I was ravenous. Skiing gives me such an appetite, my mum kept saying to me “Jess, I don’t know where you put it!?”. But one of my favourite things about skiing is the amazing food we get to eat, and this lunchtime I had the most beautiful pork neck with a baked potato and salad.

The food was amazing, and I washed it down with a refreshing Radler.

We managed to avoid the cloud better than expected and had a few more runs before calling it a day.

We stopped at the supermarket on the way back and picked up ribs to take home and cook. We were all feeling a little lazy and couldn’t be bothered to go out that evening, and instead had family night in front of the television. Relaxing and needed, we were all drained!

For my final ski day, we were up and out early to make the most of my lift pass! We were venturing a little further out to a place called Saalbach. Apparently I had been here when I was very little, so little in fact I was taken up the mountain in my pushchair! If only I could find a picture as a comparison!

We didn’t make the first lift up of the day, but it was a much earlier start than we’re used to. However the sun was beating down on the mountain side making the white snow sparkle against the contrasting bright blue skies. A gorgeous, and incredibly big resort too! Here is home to the ski circus. “Almost endless pistes, snow-covered slopes and a fascinating landscape. The Skicircus Saalbach Hinterglemm Leogang Fieberbrunn offers skiing fun at the highest level. With 270 kilometres of ski slopes, it is one of the largest ski areas in Austria. Beginners, families and experts can use 140 km blue, 112 km red and 18 km of black slopes. With 70 cableways and lifts, more than 60 cosy ski huts, numerous snow parks, freeriding park, floodlight slopes and toboggan runs, Salzburg’s skiing region is one of the most diverse and best ski areas in the Alps“. 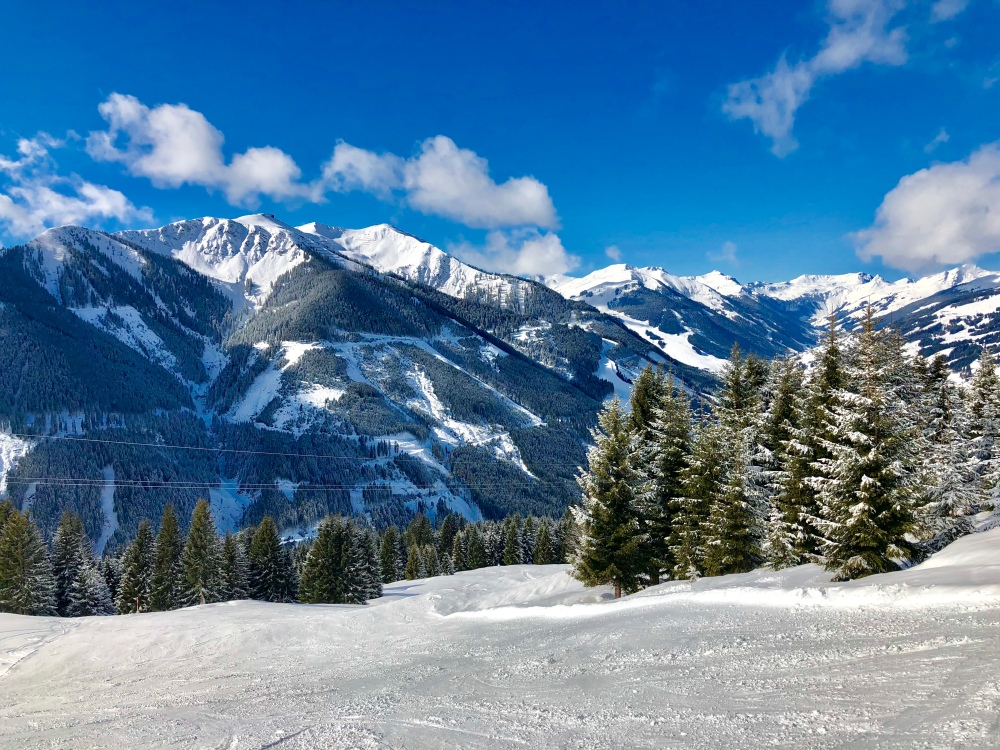 The conditions were perfect. The sun was beating down, the skies were blue, the snow was piste bashed and powdery and we took the cable car right to the top of the mountain to begin as much as we could of the ski circus.

Around 10:30am we stopped for our morning coffee stop and we sat outside in the glorious sunshine and I ordered a steaming hot mug of glüwein. I mean, it’s 5 o’clock somewhere right? 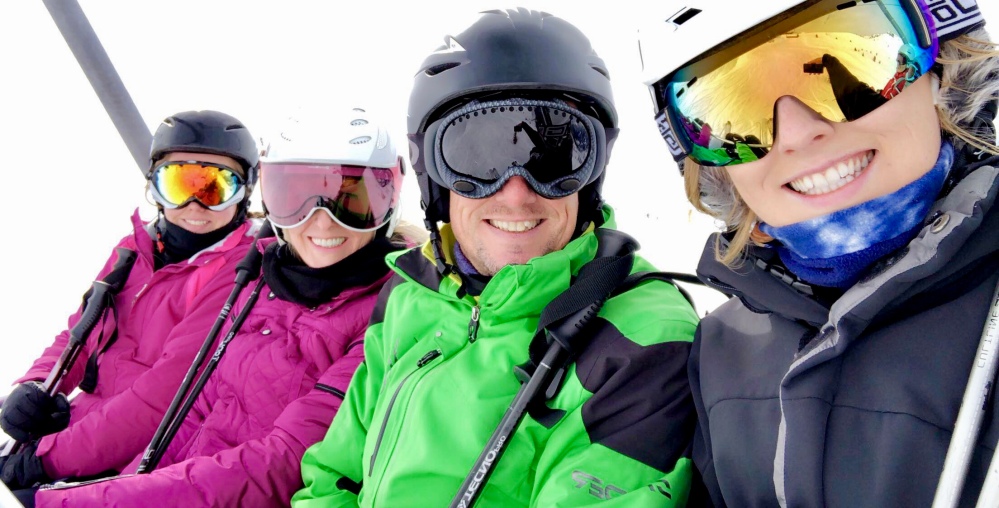 Back at it, we continued on with the ski circus winding across the mountain through the scenic blue runs, racing down the red runs and blasted down a couple of black runs too. With it being a circus, I felt like I was constantly skiing and not getting to rest as much and when lunchtime came around we had worked up quite an appetite.

It was a much busier resort here too as the ski circus connects Saalbach, Viehofen, Vordeglemm, Hinterglemm, Großer Asitz, Kleiner Asitz, Pründlkopf, Kolmaiskopf, Kniwstichkogl, Leogang, Hochfilzen, Fieberbrunn, Lärchfilzkogel, Hochalmspitze, Hasenauer Köpfl, Reichkendlkopf, Spieleckogel, Zwölferkogel, Schatteberg West and Schatteberg Ost all together! Imagine all those ski resorts being interconnected and you can imagine how huge this ski circus is. Anyway, it seemed a lot of people were also stopping for lunch too as we pulled into a packed out mountain side hut who had a DJ playing whilst people around laid in deck chairs soaking up the rays, and others ate lunch and started early on the aprés ski.

I opted for the burger, as the server said it would be an eighty minute wait for the pizza I fancied and washed it down with yet another Radler. They’re just so refreshing I can’t say no.

We skied until we could ski no more and went down to the bottom and back to the car.

Another very quick and wonderful ski trip which I’m glad I was able to sneak in and a great time catching up with my family. Thanks for letting me crash your holiday once more, see you back in Leeds sometime soon.