I managed to swap one of my Houston flights for a trip to the US capital, Washington DC! It’s a shorter layover but gave me a longer weekend in Dubai and I was happy to visit a and tick off a new destination. 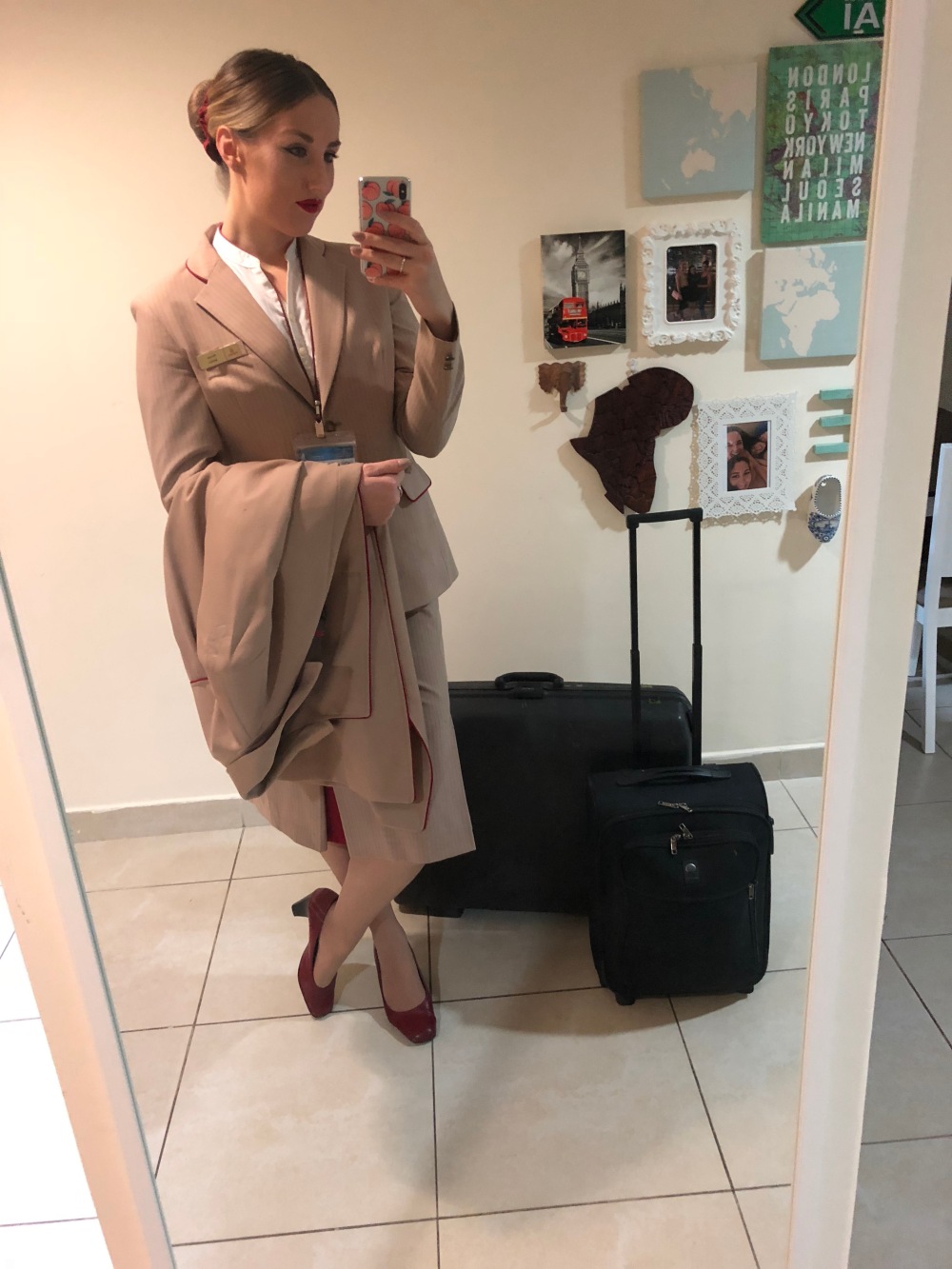 Departing Dubai at 02:25, it was a long 15 hours over to Washington Dulles Airport. It was actually a really lovely flight, and I’m ready to make a bold statement here. That could possibly be the best sleep I have ever had in the CRC. I was so tired and when it finally came around for the last break, I passed out instantly and slept like a baby. Honestly woke up a whole new woman!

Landing at 8am, we made our way through the airport and to the hotel and myself and two other economy crew ventured into the city for a little bit of sight seeing! We jumped in an uber and headed in the direction of The White House. Having seen this building so much in films, TV and on the news, I was excited to finally see it for myself in real life. 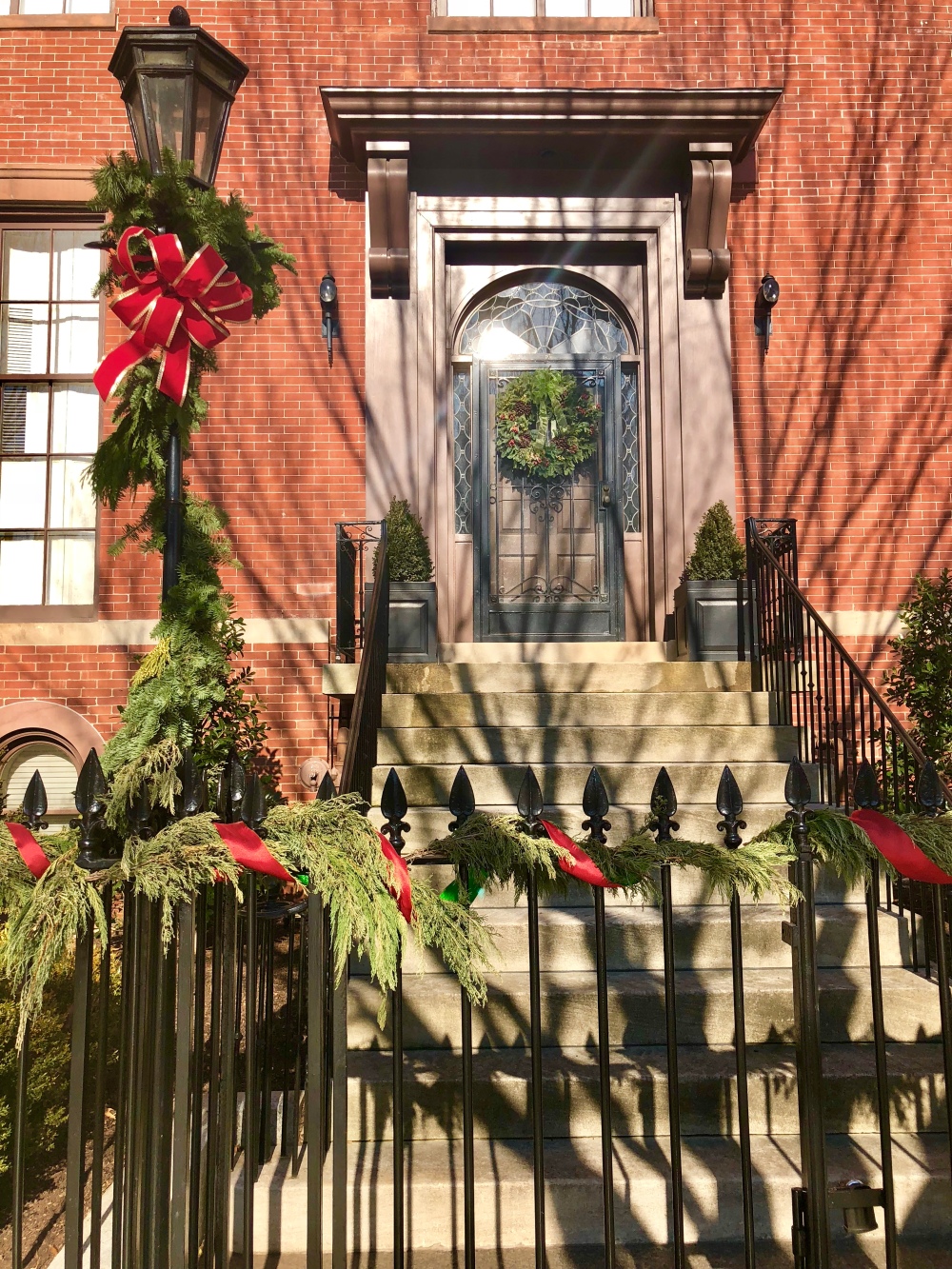 As we pulled up, the buildings surrounding it were grand in design and were all dressed  up in holiday attire. It added to the festive feel in the crisp winter morning air. As we strolled along the street, we walked past The White House which no surprise had incredibly high security, so much so, you weren’t even able to walk across to the same side of the street. 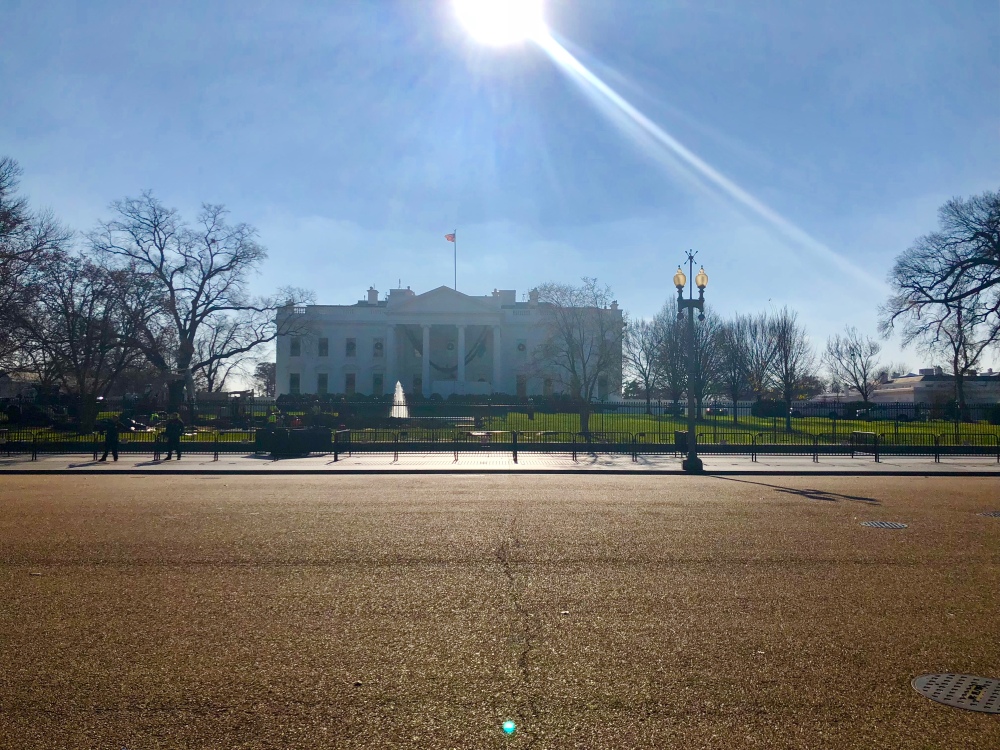 I was a little underwhelmed actually, I thought The White House would be much more bigger and impressive with a grand drive way or something. But actually it was just slap bang in the middle of the city and was much much smaller than expected. Still nice to see it though! 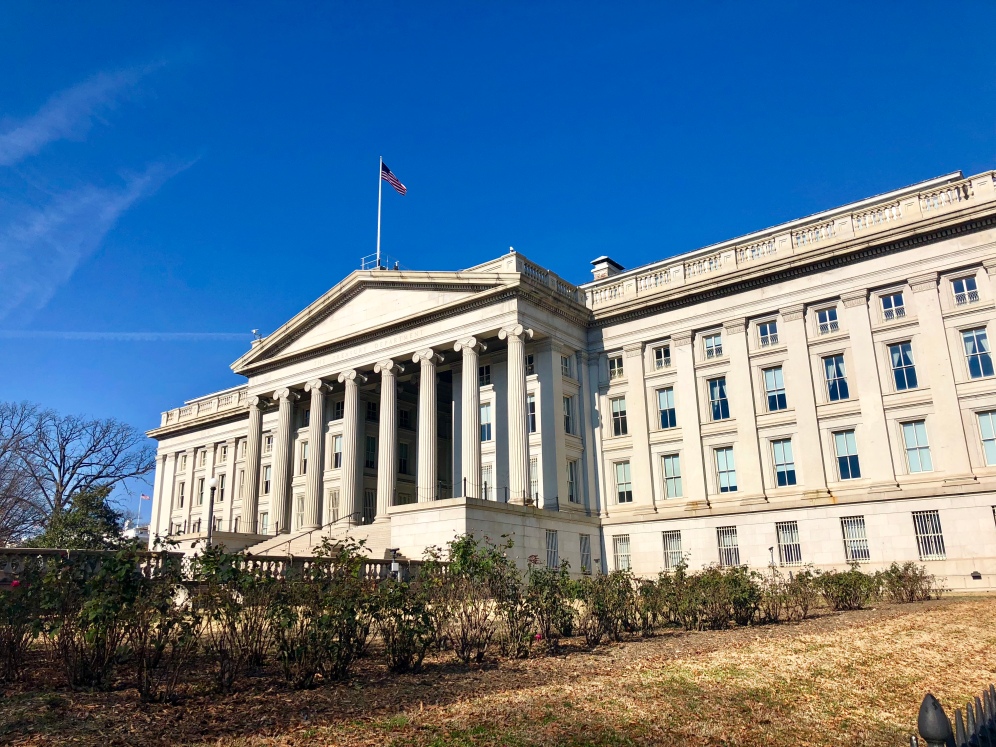 US Department of Treasury

As we walked around the outskirts, the buildings had impressive architecture and I would have only have loved to have gone inside and actually see what they’re like for myself. 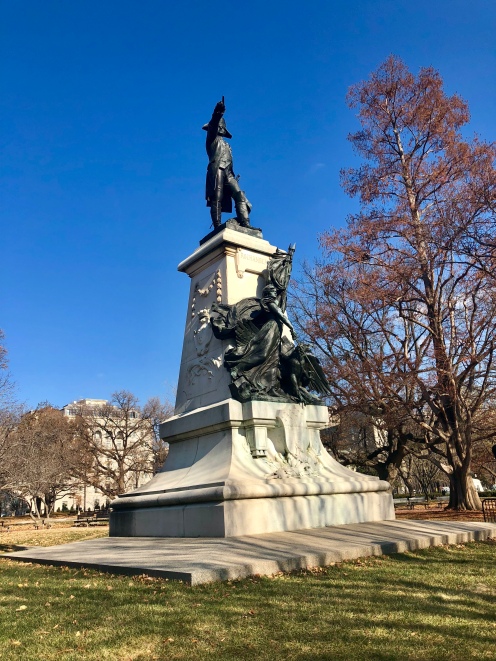 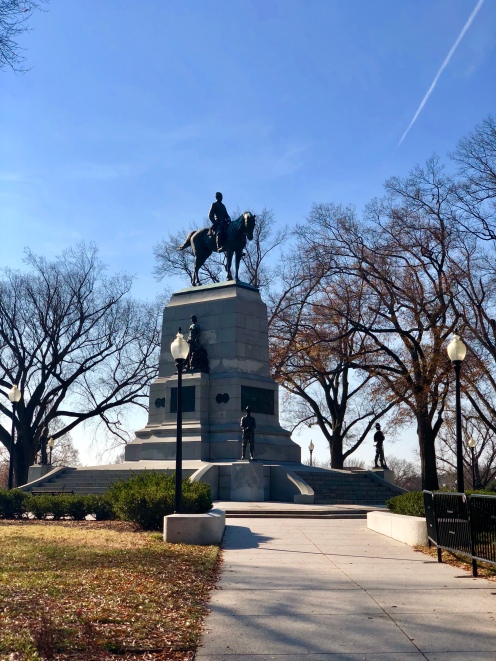 We stood at the back of the White House where we could get a better view without the sun being behind the building and there were lots of holiday festivities going on too! 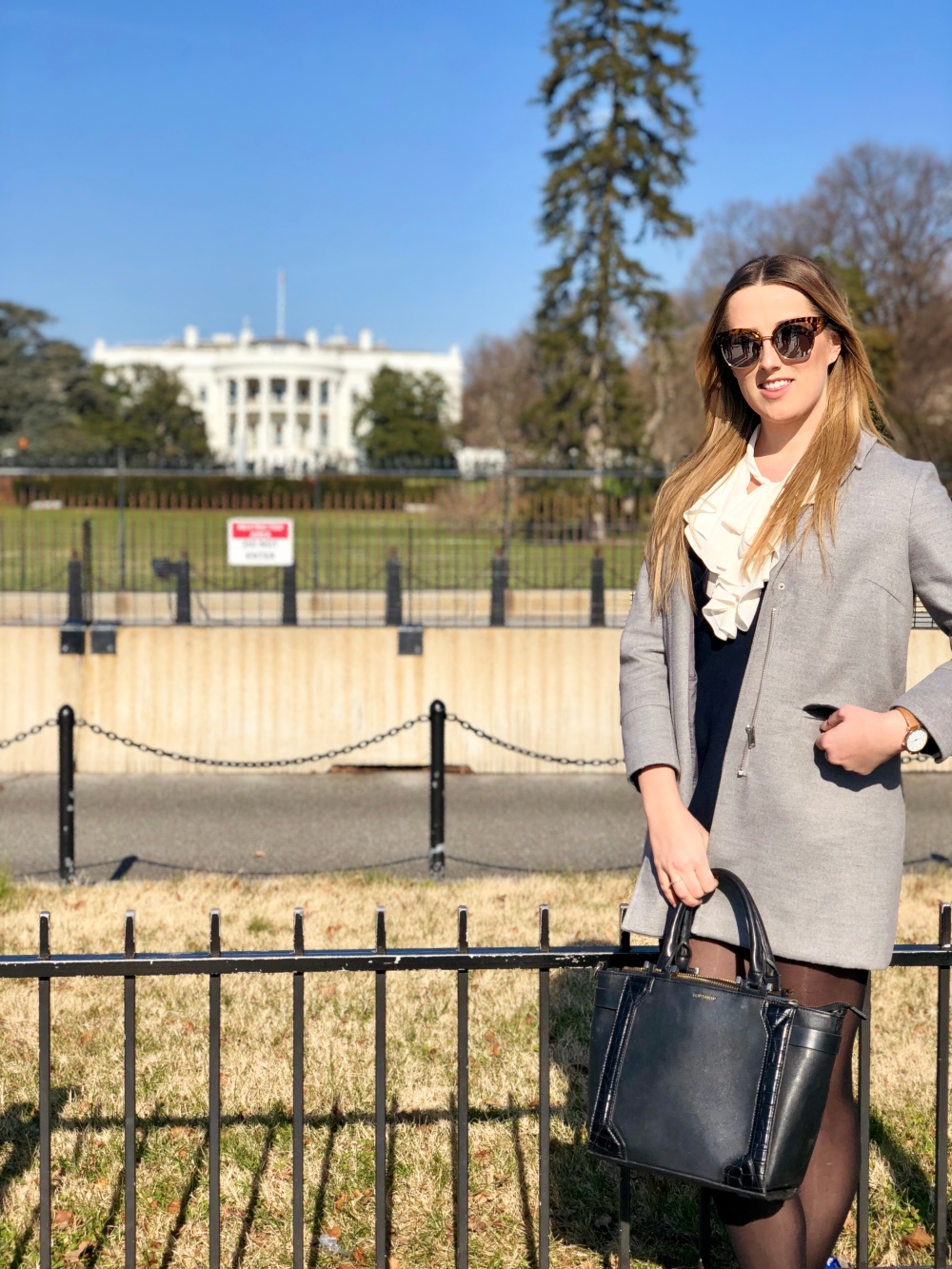 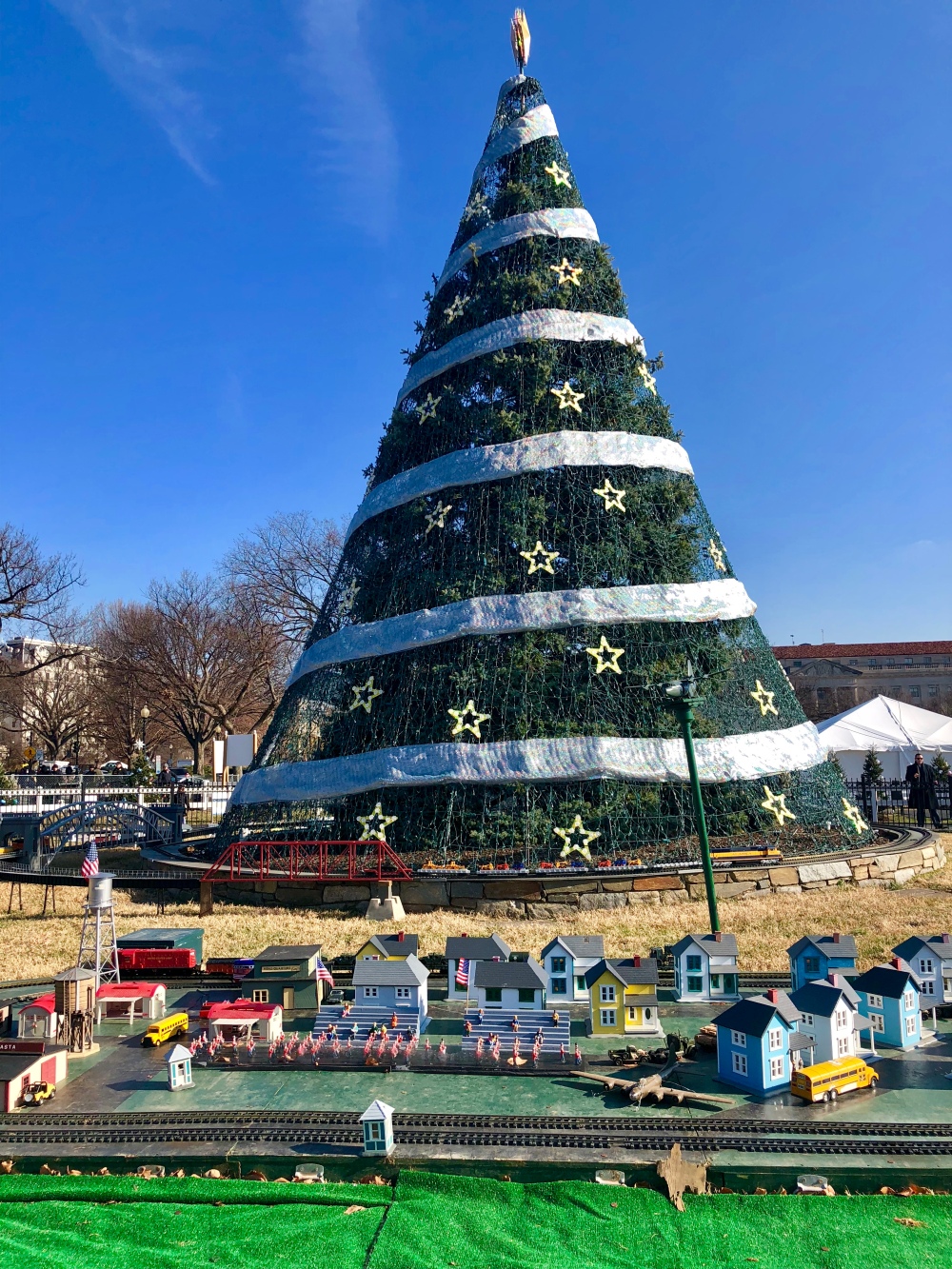 Each of the 51 states had a Christmas tree in the “back garden” and it was nice to go and find Kansas lurking around there somewhere! It’s like a slice of my American home. 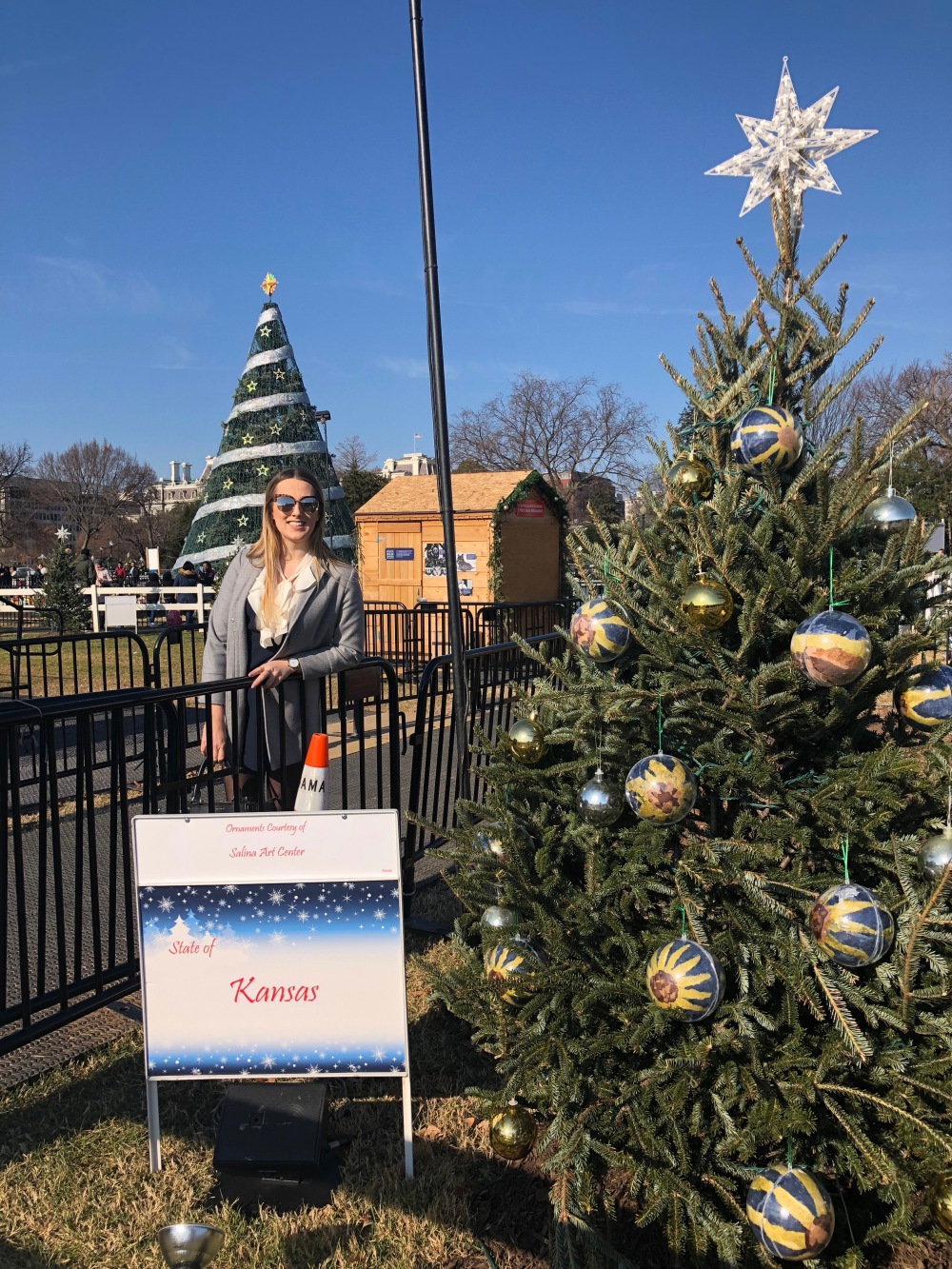 Walking down towards the monument, I was googling some interesting facts to tell the girls, and here’s one for you fact fans, it is both world’s tallest stone structure and the world’s tallest obelisk, standing at 554 feet 7 inches (169.046 m) tall! 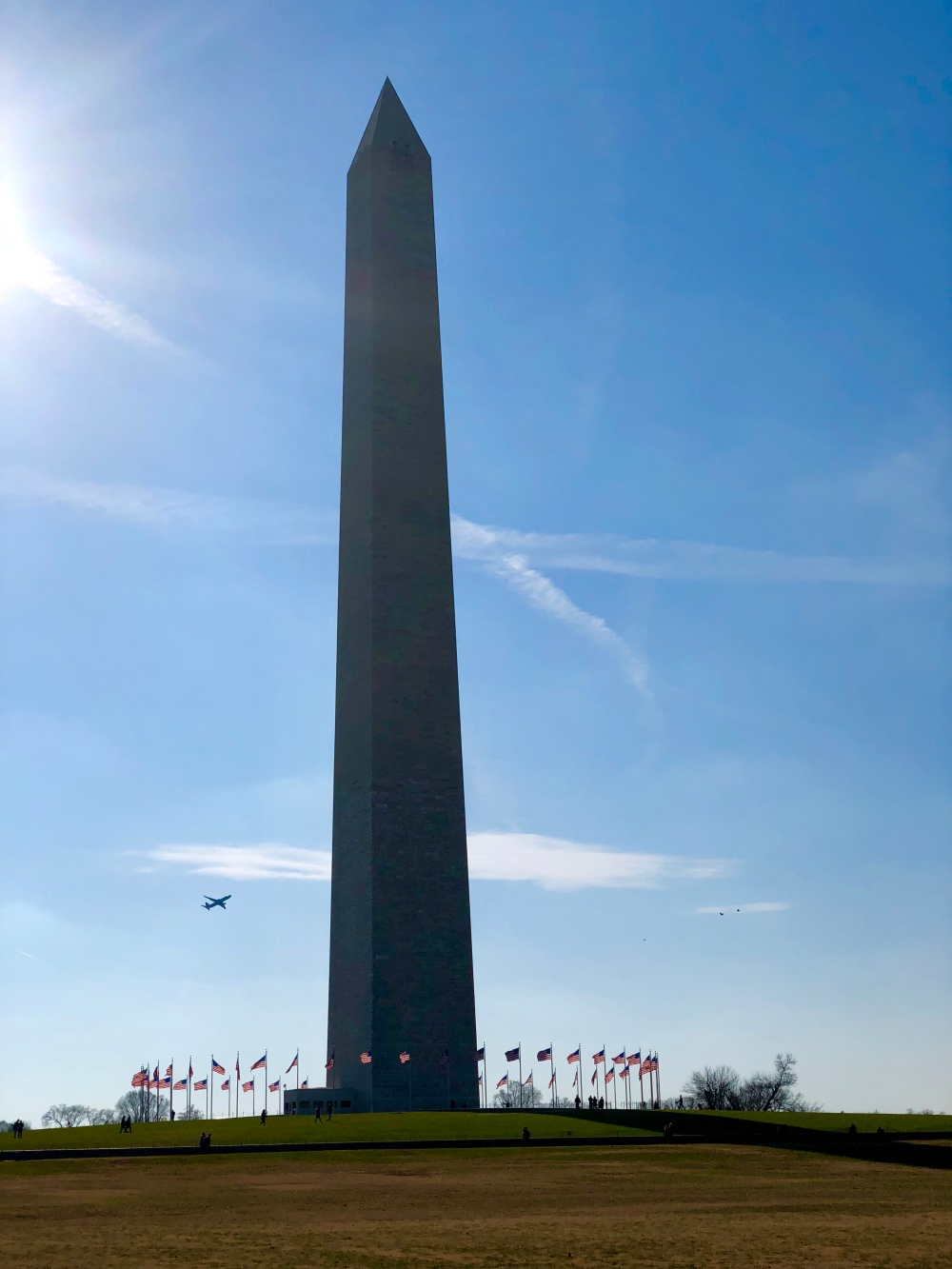 As we looked back on The White House I noticed how flat the skyline is, there weren’t any skyscrapers around but this is because no building is allowed to be taller than The White House! 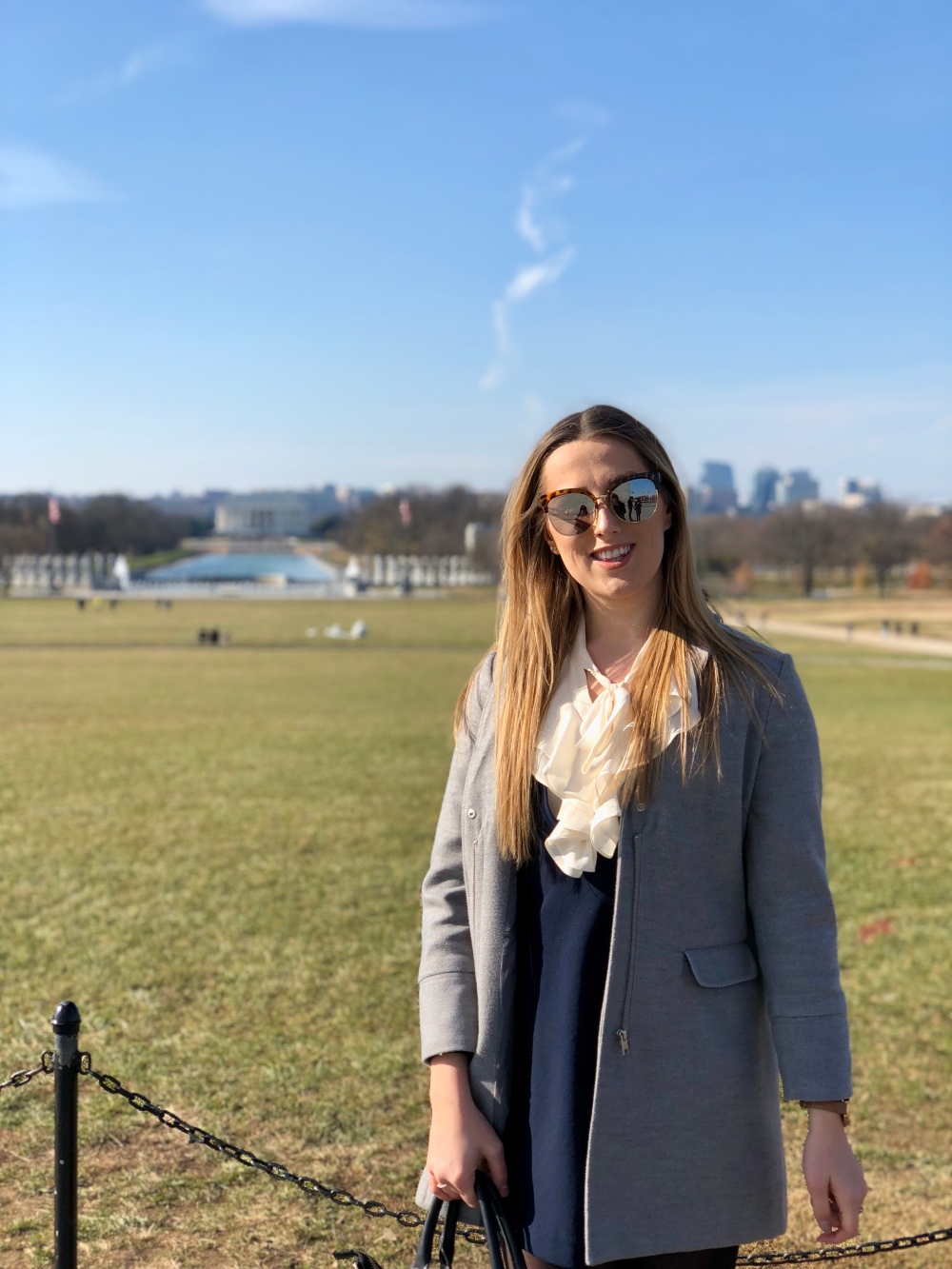 Next we walked down to the WW2 Memorial with the reflecting pool that shows off the Monument. A beautifully designed memorial that was filled with people wandering around and reading the different literature that adorned the marble walls. 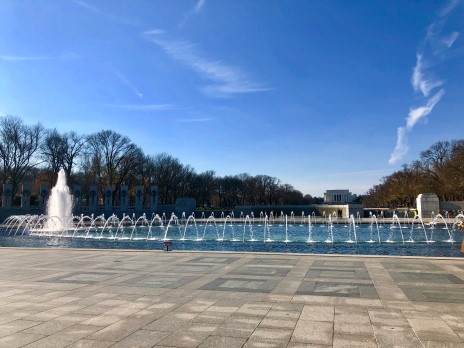 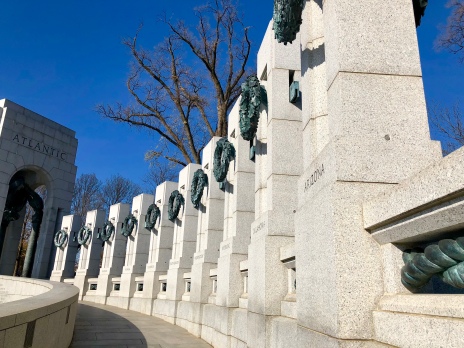 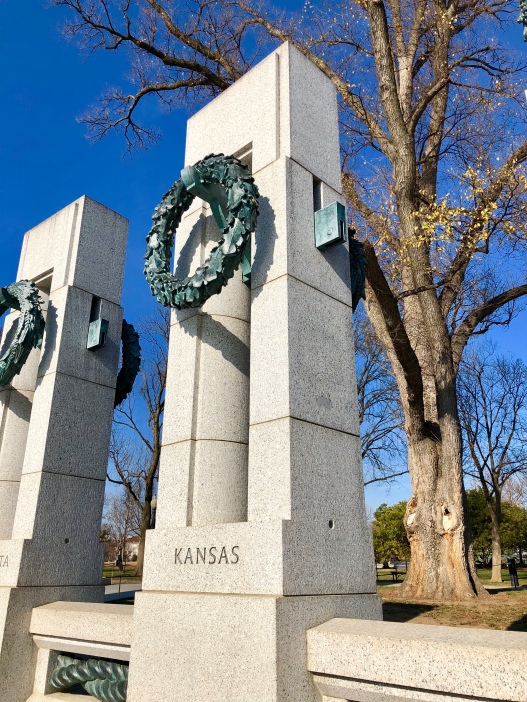 The girls were getting tired now and wanted to stop back at the mall before we went to bed, so instead of wandering over to the Capitol Building and seeing the Lincoln Memorial like I’d hoped, we went to do a little bit of a Christmas shopping and grab something to eat before we called it a day and went to bed before the flight back to Dubai. 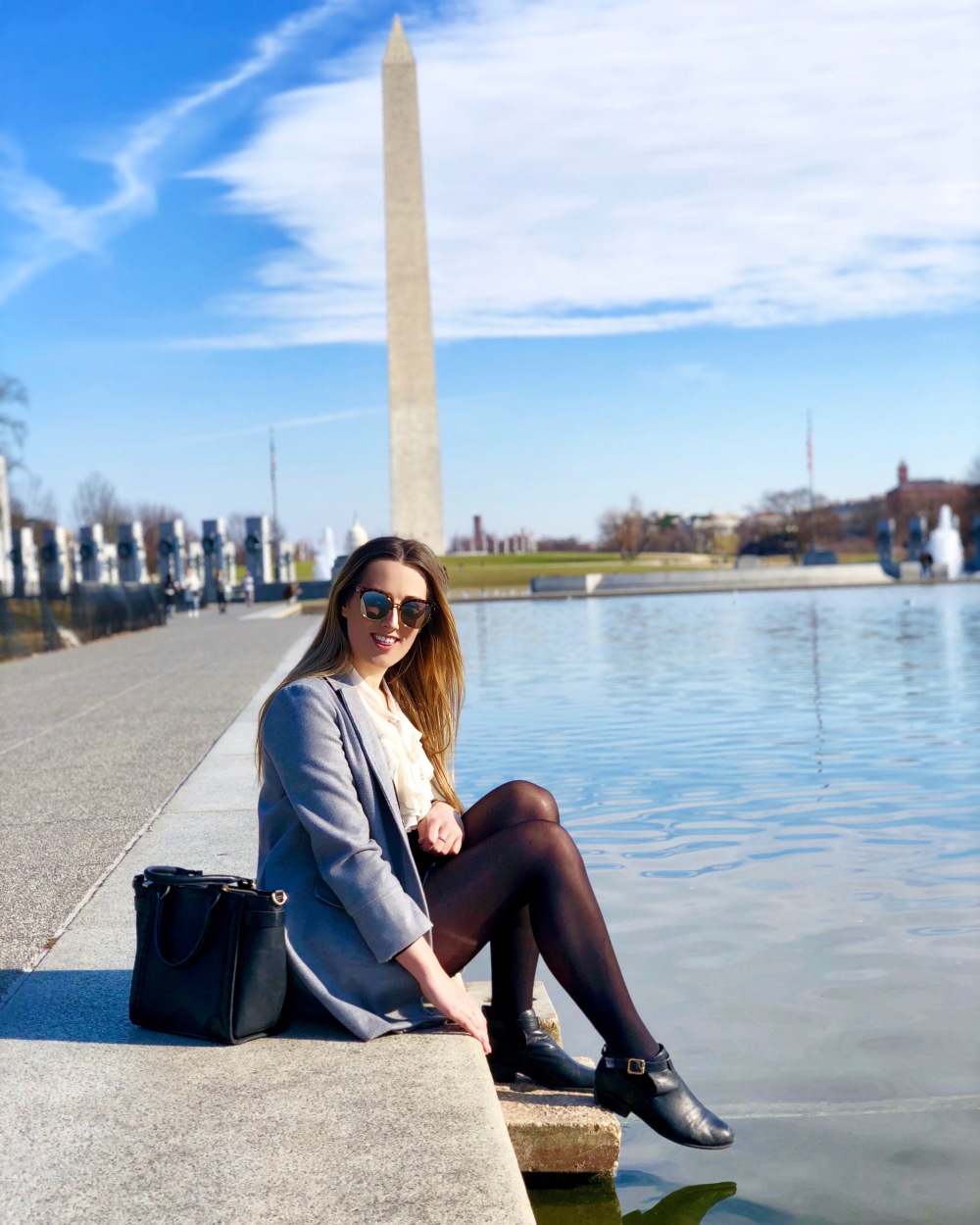 A wonderful trip, Washington DC is a great city that has a lot to offer and really good shopping too! I just wish our layover was longer as I’m so tired now. The US just always messes with my body clock! 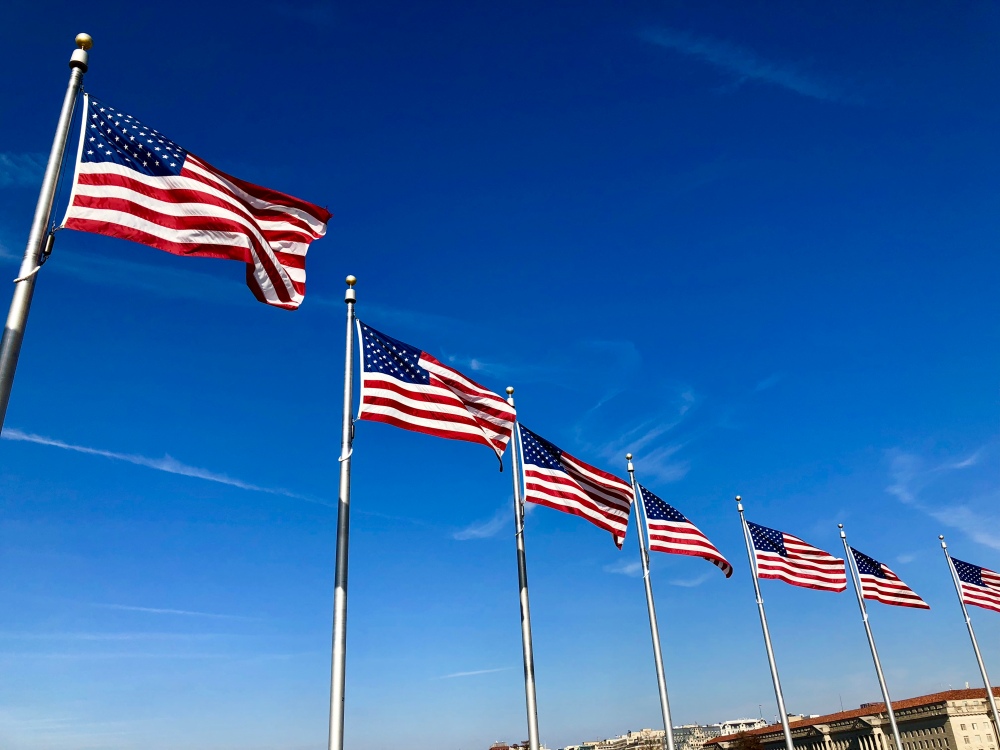