Finally I was heading back to Japan with a new destination for myself of Osaka! We departed Dubai at 3am and it was a nice 8 hours and 50 minutes over to Kansai International Airport. With 2 hours in the CRC rest and a nice and easy flight over, I was excited to explore a new place feeling rested after eating some chocolates that my passengers had given me for looking after them. How cute are these?!

However, a long journey over to the hotel left me feeling sleepy, and rather than joining a few of the crew in the hotel for dinner I collapsed into bed for a long sleep ahead of our early morning start. Not before I ordered a Japanese Katsu curry though!

That morning, we met downstairs at 7:30am to take the first shuttle of the day over to Osaka train station. We wanted to explore Kyoto and the train takes around 45 minutes to get there. So we jumped on what we thought was the direct train right on over to Kyoto… 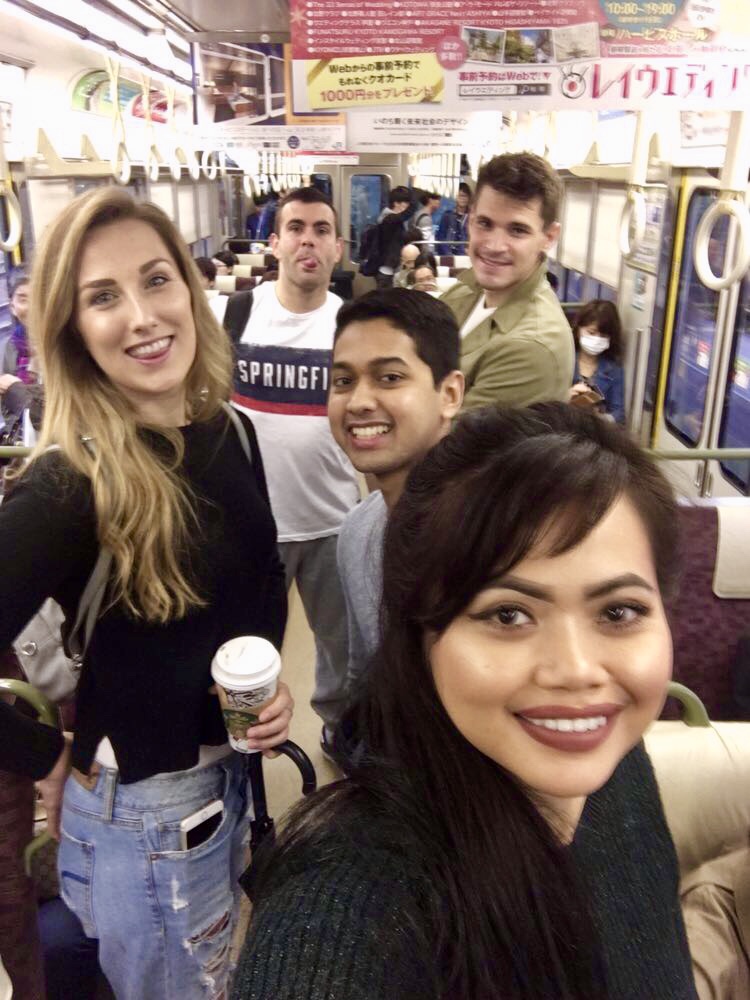 Although about 4 stops down the line it was “all change” and we ended up on a different platform waiting for another train before we would arrive in Kyoto. Upon arriving in the main station we were planning our first stop of the day and thought it would be best to make our way across to Arashiyama first, where we could visit the Bamboo Forest. So another 25 minute train ride later we stepped out into the misty rainy day ready to explore.

The Bamboo Forest was a lot closer to the train station than Google Maps had anticipated. Around a 20 minute walk closer in fact. Hidden behind the slightly built up town of Arashiyama was the most beautiful forest densely packed with the tallest bamboo you have ever seen. I’d never seen anything quite like it. 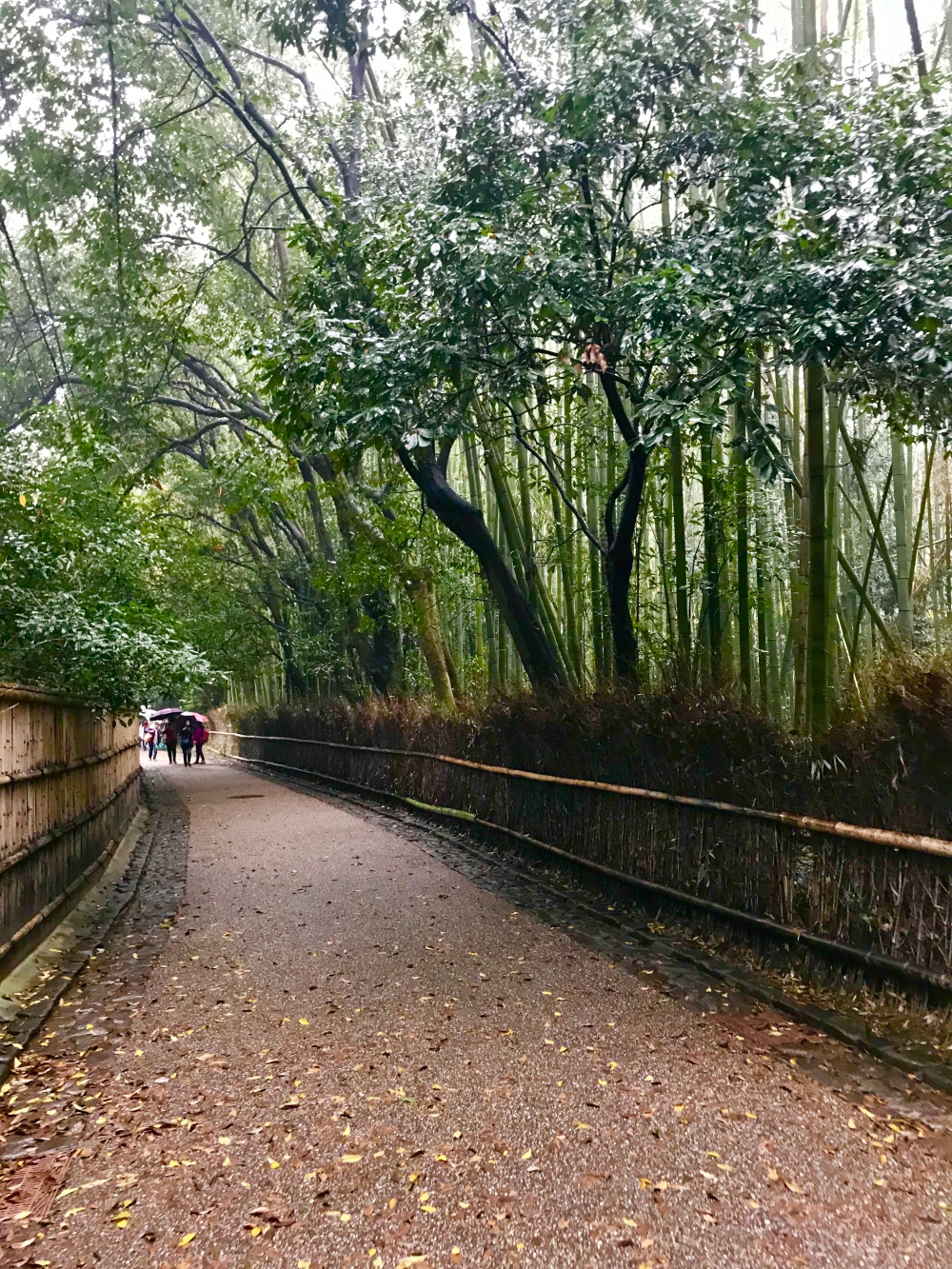 In the midst of the Bamboo Forest is the Tenryu-Ji Temple a UNESCO World Heritage Site. “Tenryū-ji more formally known as, Tenryū Shiseizen-ji, is the head temple of the Tenryū branch of Rinzai Zen Buddhism, located in Susukinobaba-chō, Ukyō Ward, Kyoto, Japan. The temple was founded by Ashikaga Takauji in 1339, primarily to venerate Gautama Buddha, and its first chief priest was Musō Soseki. Construction was completed in 1345. As a temple related to both the Ashikaga family and Emperor Go-Daigo, the temple is held in high esteem, and is ranked number one among Kyoto’s so-called Five Mountains”.

We wandered down through the beautifully coloured gardens and right to the lake side to the most incredible view.

One of the Japanese crew had said that “Kyoto is much prettier when it is raining and it gives a completely different feel for the place”. I thought she was trying to make me feel better about the dull weather whilst we were there but I completely understand why she said it now. Despite having wet feet the entire day, it gave a real eerie and mysterious vibe to the place. And with the reflective water, the vibrant colours of the shrubbery and trees against the backdrop of the mountains paired with the white and wispy mist. I couldn’t help but think this was one of the most beautiful and picturesque views I had ever seen. I can only imagine how it must be to come and pray down at the temple here with this unbelievable view. I completely get how it secured its UNESCO status in 1994 now.

We walked right round the other side of the lake and through the paths, in and out of all the different monuments and statues, admiring the scenery and just taking in that very moment. Sometimes its difficult to try and remember to take in the view when you’re wanting to get a great picture and you’re also pressured for time. But for a good 15/20 minutes we just sat in the present and admired how beautiful this world can be.

We made our way back over to Kyoto where it was finally time for lunch. With all of us wanting sushi, we stopped in the Kyoto Tower and grabbed five seats along the sushi conveyer belt. 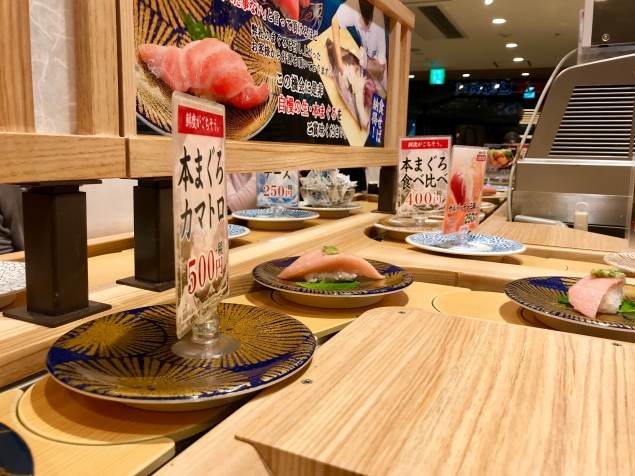 We ate until we could eat no more and after numerous beautifully fresh dishes of all different kinds of fish and seafood, we ordered the bill and thanked them for their wonderful service despite a language barrier between us all.

Our final stop of the day, we had decided to visit the Gion District. Around a 25 minute bus ride from Kyoto Main Station.

“Gion (祇園) is Kyoto’s most famous geisha district, located around Shijo Avenue between Yasaka Shrine in the east and the Kamo River in the west. It is filled with shops, restaurants and ochaya (teahouses), where geiko (Kyoto dialect for geisha) and maiko (geiko apprentices) entertain.

Gion attracts tourists with its high concentration of traditional wooden machiya merchant houses. Due to the fact that property taxes were formerly based upon street frontage, the houses were built with narrow facades only five to six meters wide, but extend up to twenty meters in from the street”. 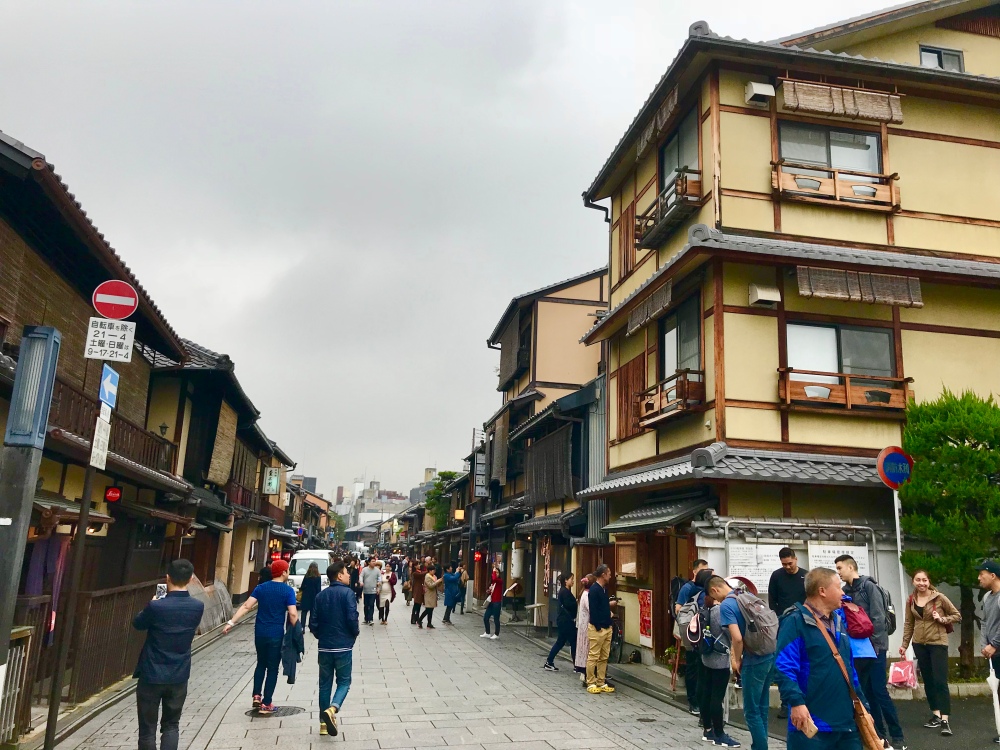 I didn’t really understand the appeal of the street here, it didn’t really boast much, and nothing seemed open until much later on. I’m assuming this is somewhere you should visit more on an evening when the hustle and bustle of the street gets going.

Finding a shop for some souvenirs and after a quick wander round we thought it would be best to go over to the hotel and try and get a few hours sleep before the 11 hour flight back to Dubai. It’s always much longer on the way back from Japan.

About 2 hours later we reached the hotel and I was absolutely exhausted. It had been a lot of walking and moving around today rather than actual sight seeing, but it was worth every moment. Kyoto is so so beautiful and has a lot to offer. And even though I thought the rain would taint the day slightly, it actually added to its character. All in all, a fabulous trip with a fabulous crew.