First of all, many apologies for the lack of posts recently. I tried my best to write this post before I left for my leave but I was just so busy with my little sister arriving in Dubai, and one of my uni friends dropping in and quick turn around to Iran and back, I didn’t get round to doing it. And then for the past 10 days I’ve been on holiday enjoying a lovely break from planes. But I’ll be posting on that a little later, so back to Chicago!!

We departed Dubai at 9:30am and it was 13 hours and 45 minutes over to Chicago O’Hare International Airport. An incredibly busy flight where I felt like I barely even sat down except for my rest where I slept for the entire 3 and a half hours, I was exhausted when we landed but beyond ready to see what Chicago was like!

Getting to the hotel around 5pm I text my best friend Katie to say I’d arrived and how long she would be, an hour later she was knocking on the door ready to spend the weekend in Chicago with me!

We got ready for dinner and a night out in Chicago – it was Friday night after all – and with some suggestions from one of the local crew, we jumped in an uber in the direction of a lively restaurant called Joy District. The restaurant was great and had a real laid back vibe as people began to mill in and enjoy the weekend. We ordered some cocktails and scoured the menu, Katie opted for the burger and I decided to go for the ostrich meatball ramen. Very random but thought I’d try something a little different. Major regrets, it didn’t taste as good as the ostrich I buy when I’m in South Africa (shock) and I made my best attempt at it before giving in.

Making our way to a bar called Three Dots And A Dash a tiki styled placed famous for their amazing cocktails, we had to wait in line before space became free. The cocktails were fab if a little pricey and we decided to stay for just one before we moved on. 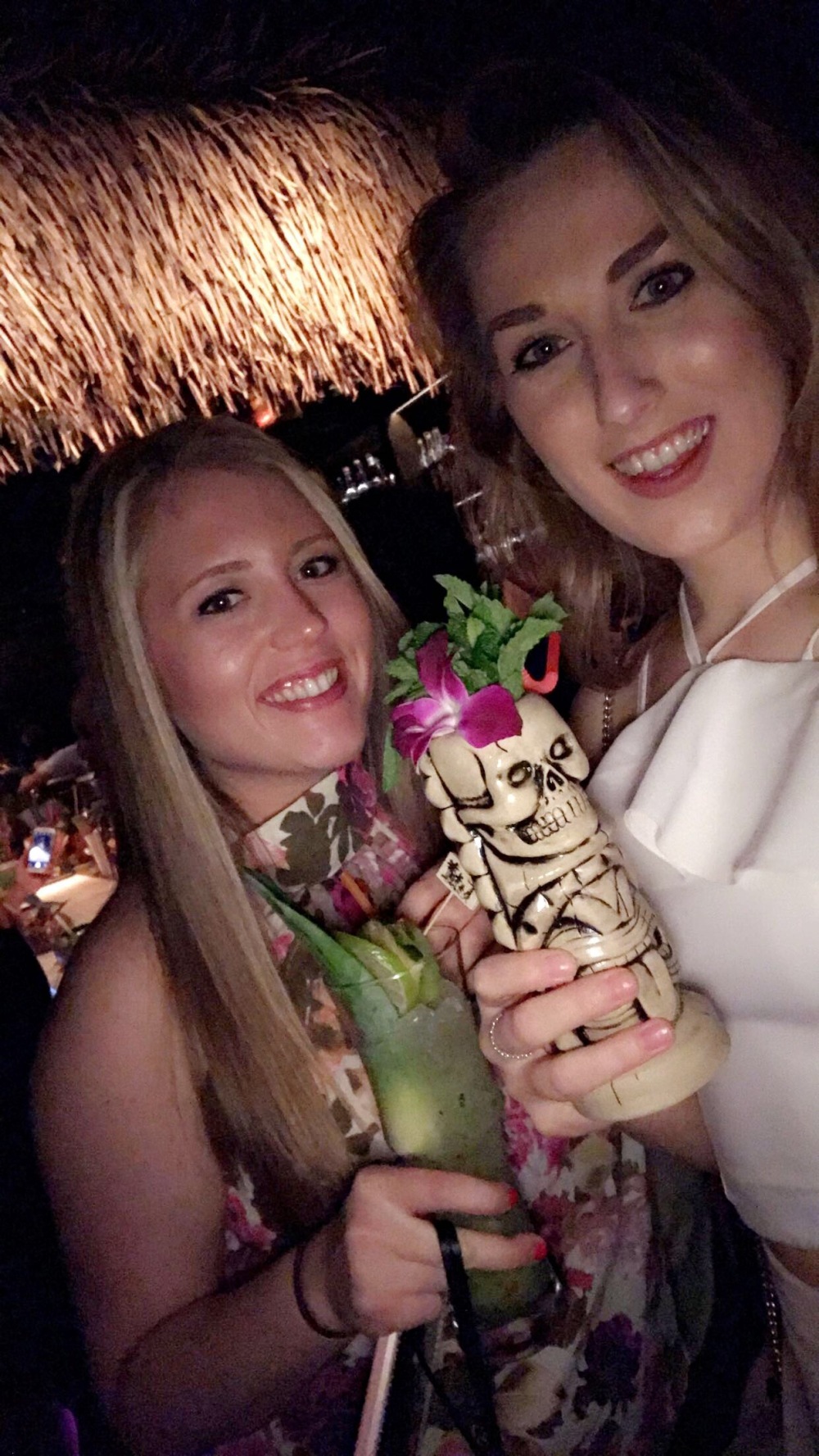 The night ended with big slices of pizza for a couple dollars before heading back to the hotel so I could sleep. That 10 hour time difference and a long and busy day at work was really catching up on me.

The next morning we woke up and grabbed a Starbucks to go and made our way to the metro station. However, 20 minutes later stood on the platform it seemed that there was a fault on the line and trains were not going to be running until it was fixed. Who knows how long that could be. So we ordered an uber and thought we would start at Millennium Gate Park. 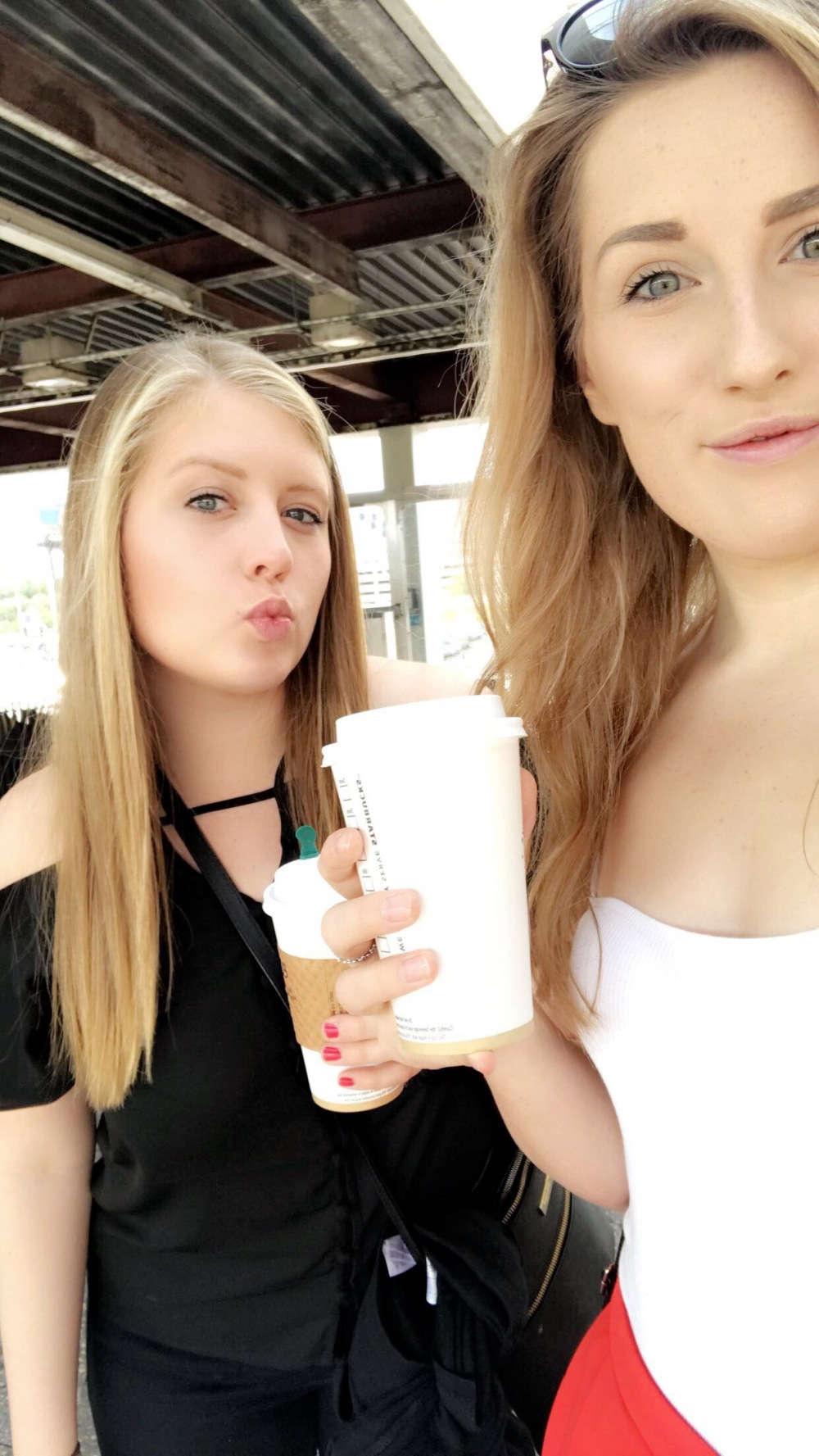 The park is pretty impressive, of what small area I saw of it. But the main focus of our visit was to go and see The Bean at Cloud Gate. 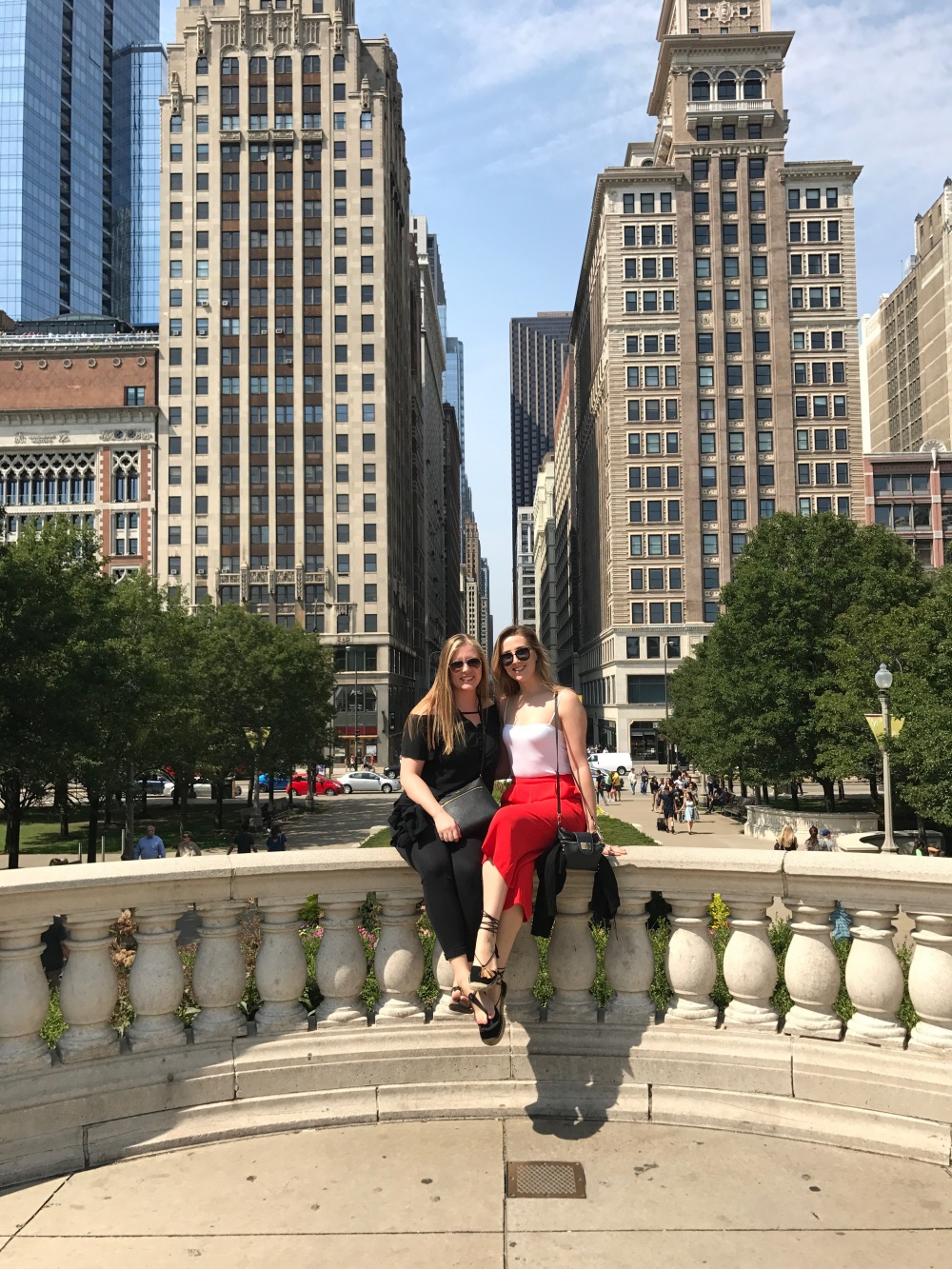 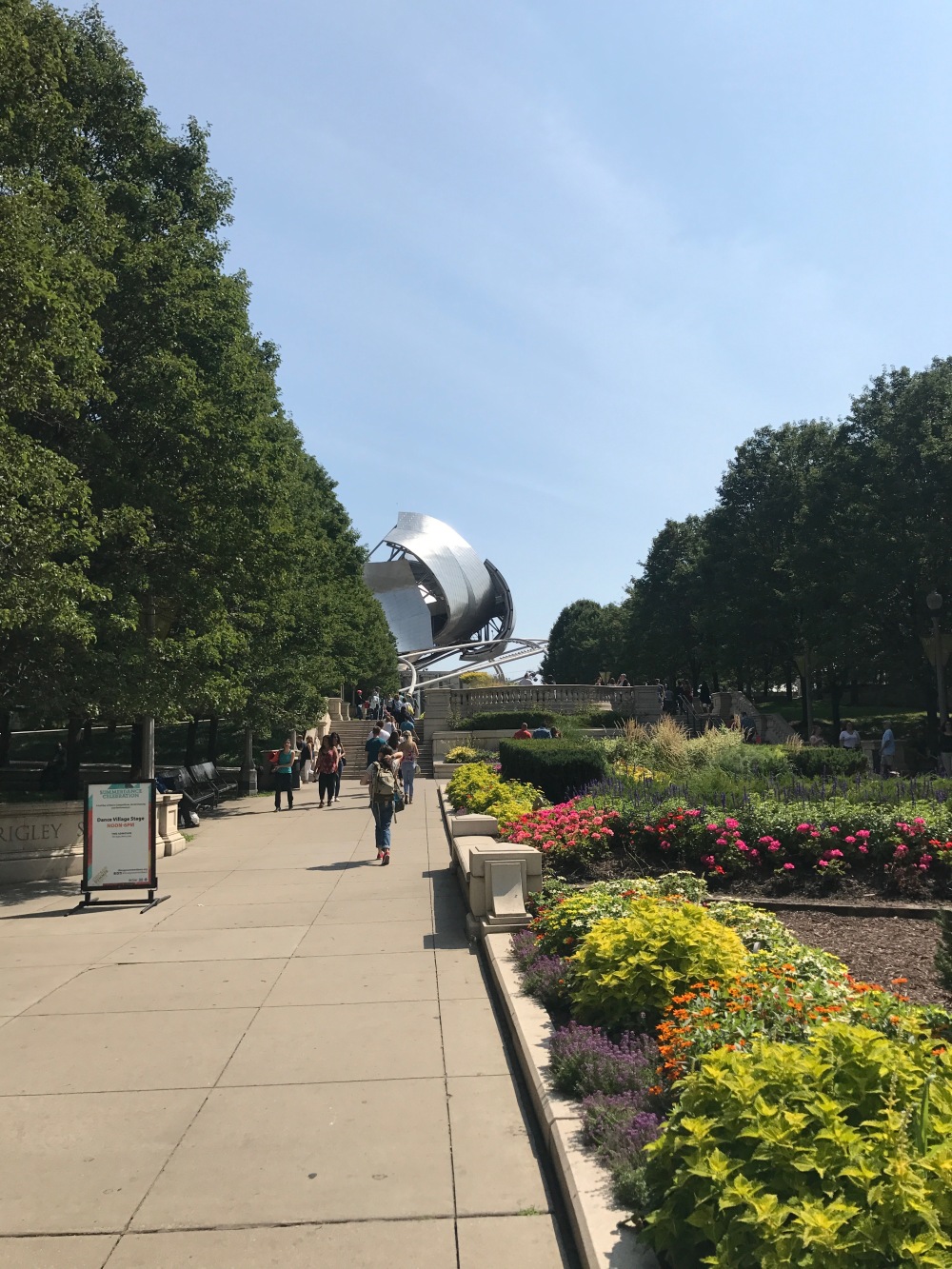 Cloud Gate is a public sculpture by Indian-born British artist Sir Anish Kapoor, that is the centerpiece of AT&T Plaza at Millennium Park. The Bean itself weighs in at over 110 tons, and is 66 feet long and 33 feet high. A pretty impressive yet random sculpture.

It is a lot bigger than you expect and on this beautifully sunny day reflected the cities skyline in its mirrored exterior. We walked around it, under it, in between it many times noticing how the reflection changed and skewed the image of us as it dipped in and out of the grooves and mounds of The Bean. 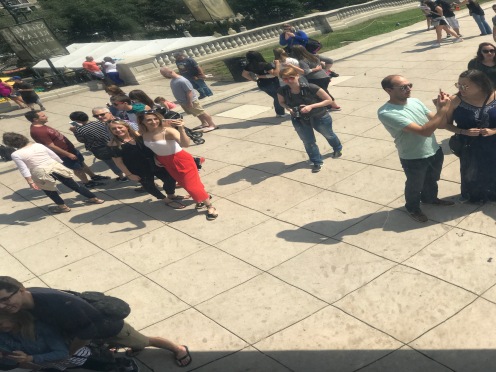 The place was bustling with people and a stage had been set up for a dance festival and music was pumping loudly into the air creating a real lively and fun atmosphere.

Ready for some brunch, we’d googled some good choices that offered our favourite Bloody Mary’s and decided on a place called The Gage. Sliding into cushioned seats in a place where limited tables were available – it seems we had stumbled across a popular spot – we were given menus as we waited for our cocktails to arrive. And they didn’t disappoint. At all.

I had decided on Eggs Benedict whilst Katie chose the Irish Fry. The food was beautiful and came in the biggest portions and I managed to just about finish it off as I drank my perfectly spiced Bloody Mary. I would seriously recommend this brunch venue for anyone visiting Chicago, I will most definitely be returning whenever that may be.

Our stomachs full and ready to see more, we just made it in time for the free city shuttle service (how great is that it’s free??) in the direction of Navy Pier. 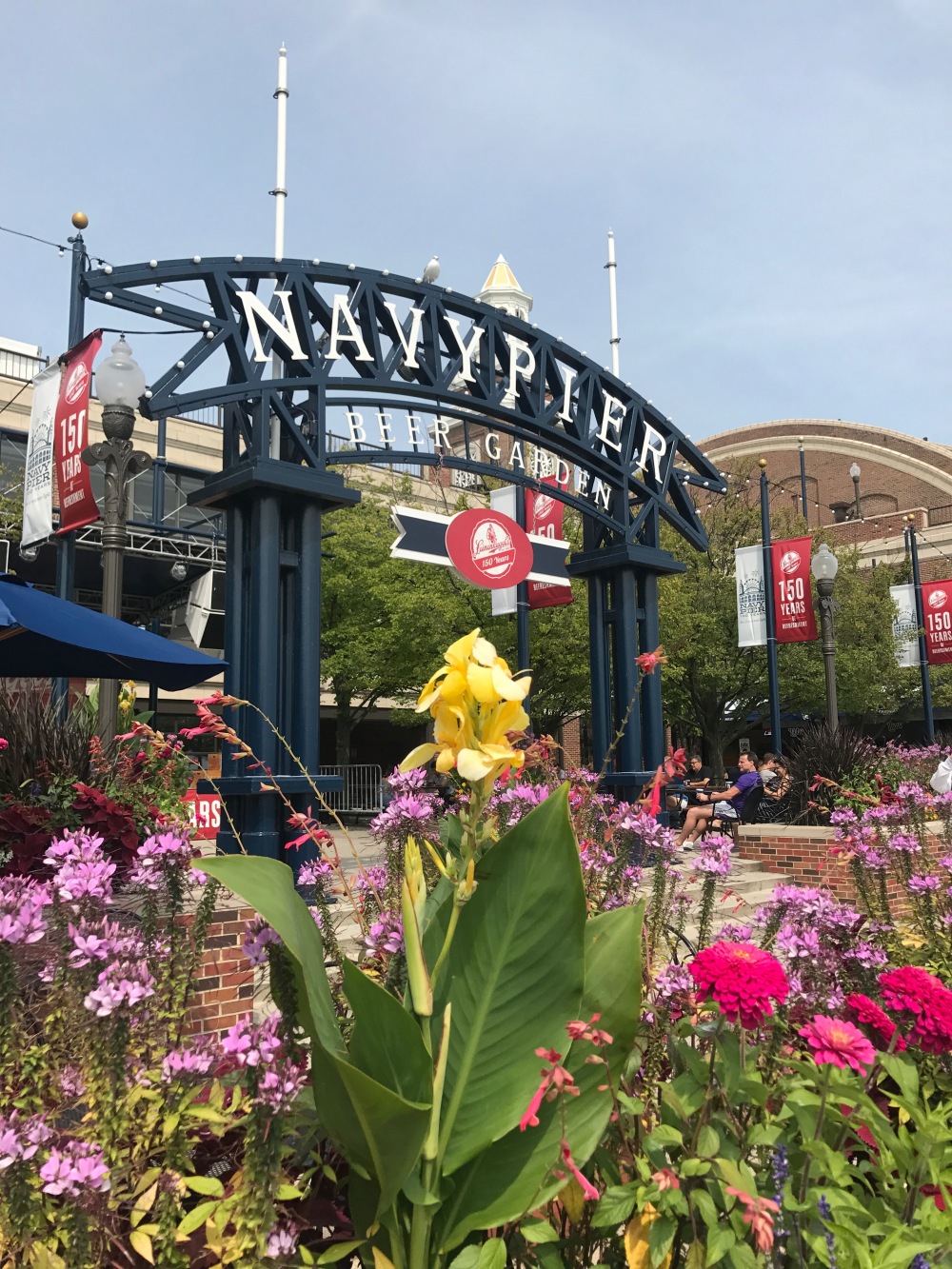 Navy Pier is a 3,300 foot long pier on the Chicago shoreline of Lake Michigan.  The Navy Pier currently encompasses more than fifty acres of parks, gardens, shops, restaurants, family attractions and exhibition facilities and is the top leisure destination in the Midwest, drawing nearly nine million visitors annually. It is one of the most visited attractions in the entire Midwestern United States and is Chicago’s number one tourist attraction.

The place was packed out with it being a weekend with gorgeous weather and there were so many boats heading up and down the Lake with people soaking up the last moments of summer. Stopping for a frozen margarita in the sunshine to cool down, we then walked over to the Magnificent Mile.

The Magnificent Mile is, you guessed it, a mile stretch of all different shops. And as a little bit of a shopping enthusiast (they usually call it a problem when you can’t admit you’re addicted right??) we thought it would be rude to not pop into a few shops as we walked the mile down.

I managed to get the deal of the century, with a pair of knee high black leather heeled boots that were in the sale reduced down from $220 to $35 and there were only one pair left in my size. I’m sorry but is that meant to be or is that meant to be???

All that tiring work worked up a thirst and we went up to the Signature Room, a high rise bar and restaurant with great views over the city of Chicago, on the 95th floor of the John Hancock Centre. 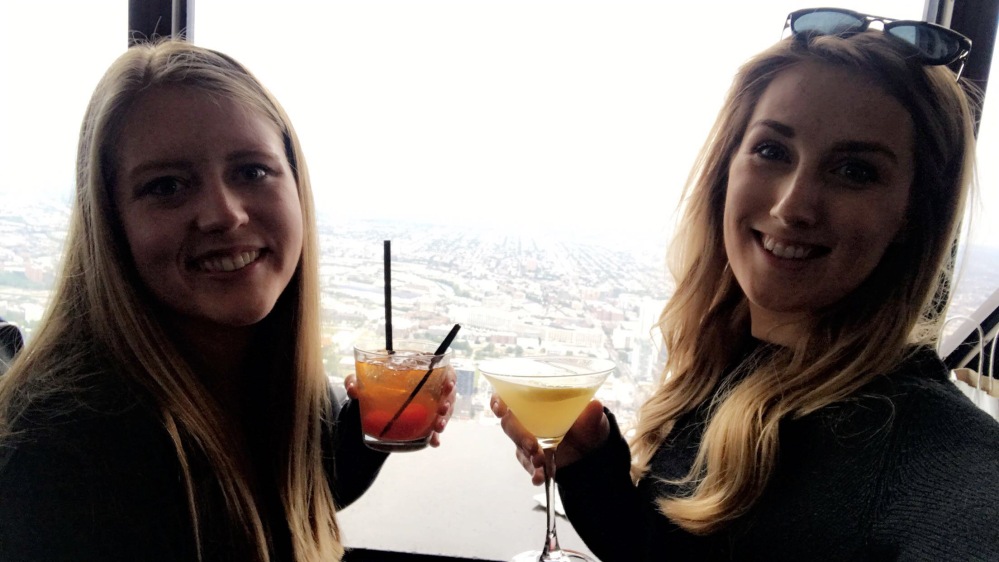 Surprisingly the best view of all was from the women’s bathroom! You thought they would have designed the place better unless they felt the females deserved a little treat!!

Ravenous, we moved on to get the only obvious meal when in Chicago, some deep dish pizza! We’d been recommended a place called Giordano’s and had a 45 minute wait until we could even get a table it was that popular. The only good thing about this was that you can pre order your pizza whilst waiting as they’re all hand made to order and take a while to cook. One of Katie’s friends has just recently relocated to Chicago who also went to the University of Kansas with us – I just hadn’t met her – and she also joined us for dinner. We opted for a BBQ chicken deep dish and a vegetarian supreme that was filled with broccoli and sat chatting away whilst waiting for the table. 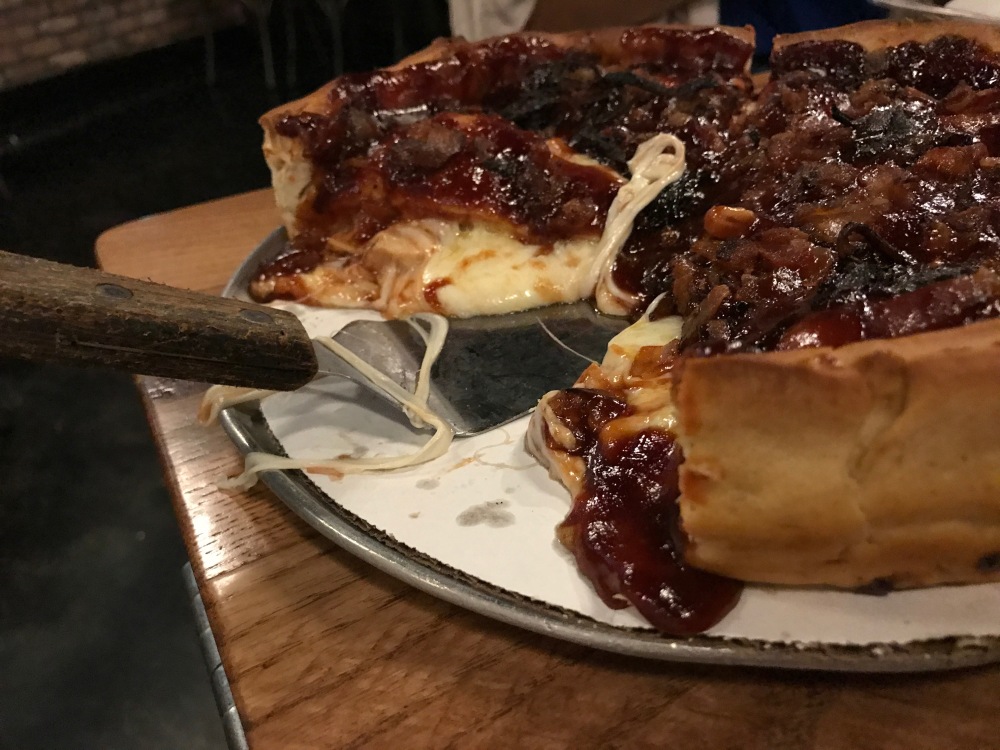 First impressions of the pizza: wow. I wouldn’t even call it a pizza, I’d call it a pie! The cheesy pull as you grabbed a slice was ridiculous and after just one slice you were feeling as though you were hitting the food wall. I powered through managing a mediocre two and a half slices before we gave in and asked for it to be boxed up to take back to the hotel.

Tired after a busy day of sight seeing we made our way back to the hotel and collapsed into bed. US jet lag has never been my friend.

The next morning I woke early and had breakfast in the hotel buffet and then said my goodbyes to Katie who was making her way back to Milwaukee and I headed over to the outlet malls. With nothing major there, I headed back after less than an hour and tried to nap a little before the 14 hour flight back but failed miserably.

I had a wonderful weekend in Chicago and it was so great to catch up with Katie. Thank you for making the effort to come down and visit me Katie, hopefully it’s not too long before we see each other again soon!!