A late night departure out of Dubai, but with a short 4 hours over to Aéroport de la Pointe Larue in the Seychelles, I could hardly complain at getting to spend the day here. The majority of our layovers are a minimum of 24 hours, but with it such a short flight this one was only 15 hours. I was still determined to make the most of my day though! Landing just after 6am, we made our way over to the hotel in the rain (what a shocker, its raining in paradise for me again) and arranged to meet a few of the crew downstairs for breakfast. 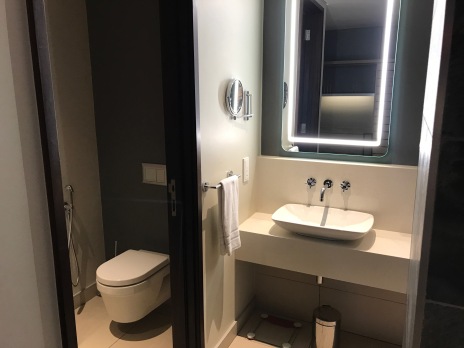 The hotel was beautiful, which slightly took the edge off the absolute downpour outside. Hoping that the clouds would clear, we tucked into delicious fresh fruits and plates of eggs on toast and thought of a plan for the day. Myself and one of the other economy girls Anna from Sweden, went outside to see how bad the rain actually was…

Not looking fabulous, but also not wanting to spend our precious time sat in a hotel room, we went over to the concierge to ask about snorkelling as we’d seen a few guests roaming about the hotel clutching onto snorkelling gear thinking that would be our best bet for the rain. However, the concierge informed us it was going to be around £100 for the trip! Not feeling like splashing that much cash, we asked for other options and he suggested a tour of the island taking us to different areas and our driver could best advise us dependent on the weather and we agreed to meet downstairs an hour later.

I couldn’t quite believe my eyes, I asked for a little bit of sunshine and it finally came out for our tour, it’s an absolute miracle!

Meeting our driver, we jumped in the car and he took us straight to a viewing point which overlooks the main island, Mahé, and some of the other surrounding islands by the airport. Leaving the island our hotel was in, we drive by the bluest of waters. Just when you think you’ve seen the bluest waters, along come some more. I was content enough just driving around taking in the fantastic scenery.

We drove right up the mountain through the tiny, bendy, windy roads which had the steepest drops either side. The thing I love about the Seychelles is the lush green back drop against the gorgeous blue sea. It just looks like a piece of paradise. Pulling up at the side of the road, we jumped out to the most spectacular view. Like something you would see in a holiday brochure.

I don’t even feel the picture does it justice, you could sit here for hours just taken in the view. Who wouldn’t want to go on holiday here?

After many pictures, and eager to head on before the heavens opened again, we jumped back in the car and up to a higher viewing platform. Sadly, luck wasn’t on our side and boy did the rain come down. These tropical showers don’t do anything in half measures, but I was determined to not let it ruin my day.

We pulled into the Ruins of Venn’s Town, which if you can’t read from the sign above it says:

“Venn’s Town, better known as “Mission” was a settlement whereby a boarding school was founded in 1875 by Reverend William Chancellor of the Church Missionary Society of London to care for and educate the children of slaves freed by the British Navy.

The mission officially closed in 1989 when the pupils deserted to attend the new Mission Schools in Victoria, but carried on officially to 1903″

There were a few remains left over from the school here which helped the slaves, but what was impressive from the school was the view of which the pupils got to look at whilst they attended their studies each day. 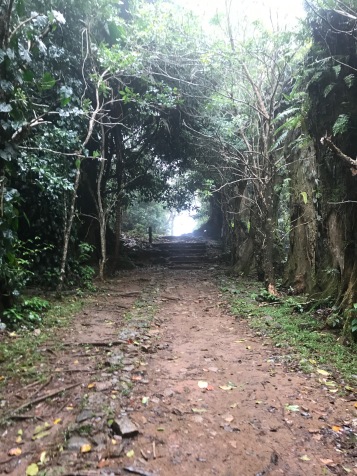 Despite the downpour outside, it still gave the most impressive views. The jungle backdrop paired with the thin layer of fog, it felt like a still from the movie Tarzan. With only myself and Anna stood atop this mountain side, it was incredibly peaceful and felt as though we were the only ones on the island. 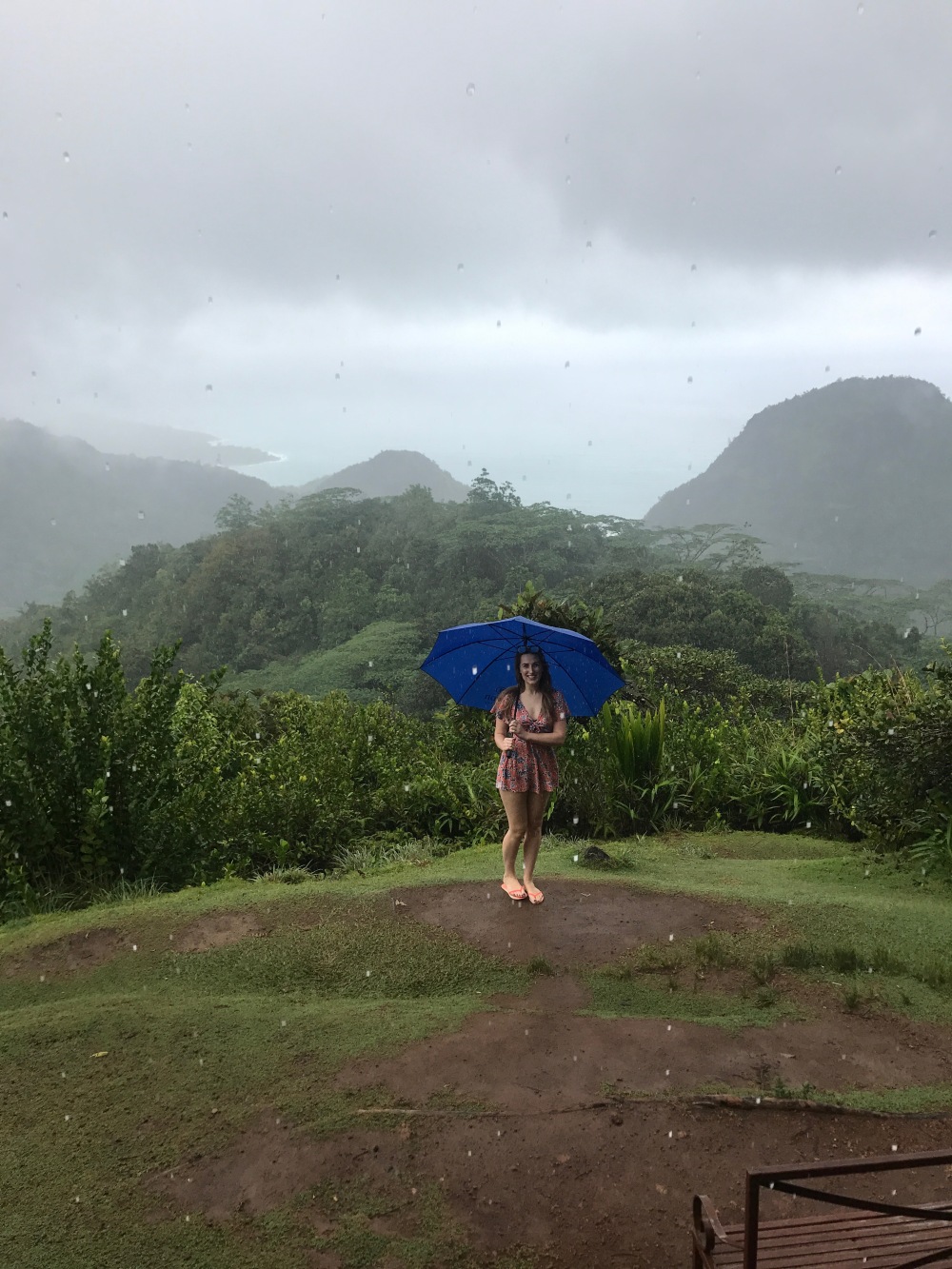 Regardless of the umbrella, we were still getting soaked and walking around we were struggling to keep our flip flops on our feet so we jumped back in the car in the direction of the tea plantation. Sadly it was shut, we were unsure if it was due to the weather, or if it was because it was a weekend, but we continued onto the next point of our excursion – the beach!!

The secluded haven of paradise was on the west of the island, and although it was trying its hardest not to rain, there was still a little bit creeping through. I’m running out of words to describe the beauty of this place, but if it was sunny I would have stayed on this beach the rest of the day. Sitting on the swing under the trees, we were more sheltered, but the driver said that we should try the north of the island for better weather. So after playing around for a while in the water, we dried our feet and drove in the direction of Beau Vallon.

The driver asked if we wanted to see the waterfall, a popular tourist attraction here, even though it was still raining. I was keen to see as much as possible, and we did a small trek through what felt like the jungle up to the waterfall.

Clambering over slippery rocks and in between trees and vines in our flip flops (will I ever wear the correct footwear??) we made our way up the river and into the clearing of the waterfall. Not the most impressive waterfall, but again it was incredibly calming and peaceful. You really felt at one with nature. If the sun had of been shining, I’d of probably gone for a swim in the waters. I dipped my toe in to test the temperatures and it was pretty warm too!

And finally we headed over to Beau Vallon, a place where we could also see the infamous  Aldabra Giant Tortoise. These tortoises are native to the Seychelles and one of the largest in the world. They tend to weigh over 85kg and are often over 100 years old each. I knew they were giant tortoises, but I definitely didn’t realise how big they were! As the pictures weren’t doing them justice, I got right up next to them to show you the comparison, and I’m tall! 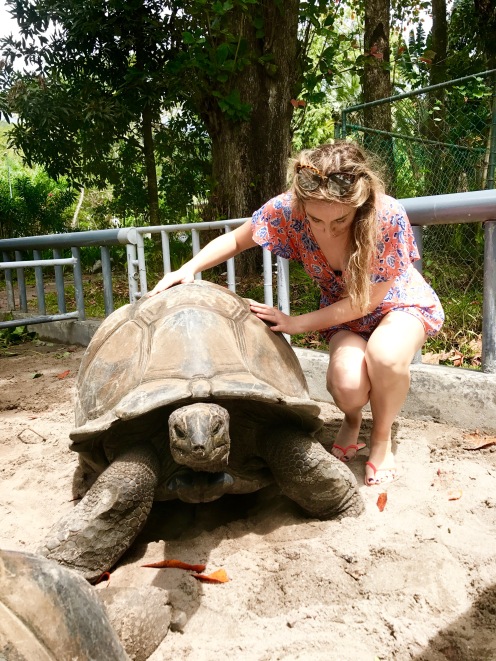 They were very lazy animals, dosing around in the sunshine, but would happily come right up to you if you could find them a big leaf to chomp on! They happily munched through plenty of leaves whilst we were there. Our driver also told us you can sit on them, they can withstand very heavy weights with their shells which he showed us. I however wasn’t that bothered for sitting on them, as I know I wouldn’t want it to be the other way round and have that sitting on me!

We eventually headed down to the beach after some precious time with these incredible creatures, and the sun was out so we go out our bikinis and sunbathed for an hour or so. How fabulous to fly to the Seychelles just to sunbathe for the day? 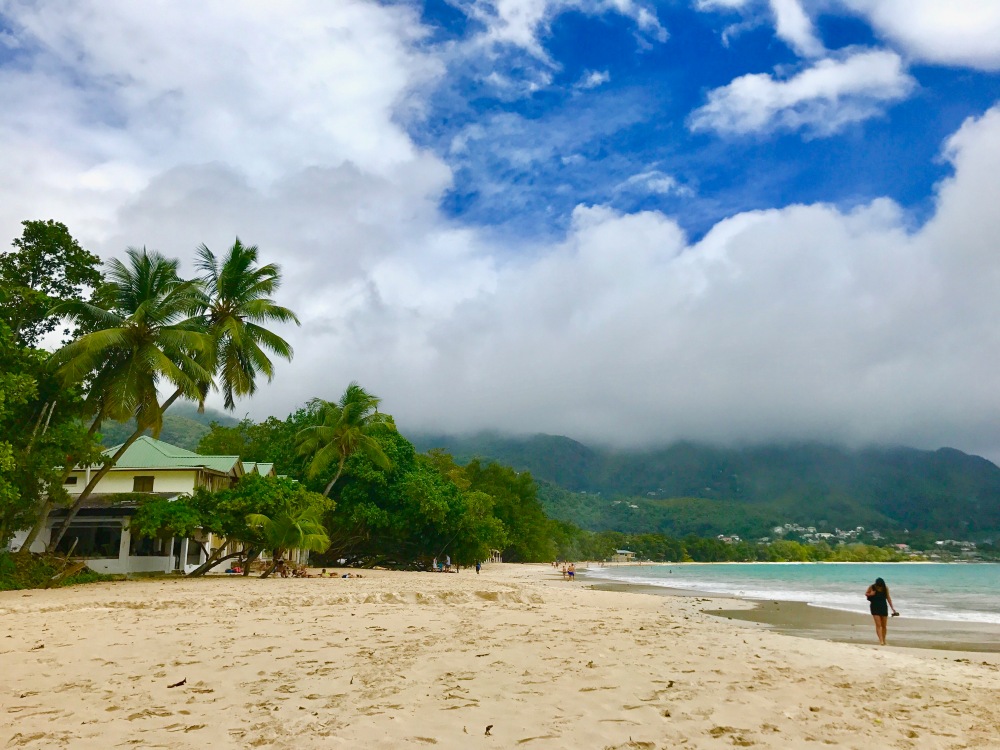 I also went for a dip in the water as I love the sea, but the “small” waves were deceivingly small and I ended up soaked. Good job the sun was out to dry off before the drive back to the hotel.

And it was then time to go back, so we could finally sleep before our wake up call back to Dubai. I had such an amazing layover, in comparison to when I was last there in December, and its seriously made me want to holiday here but when I know the weather is best. Which for anyone interested is March/April/May, so start saving guys to experience what I genuinely believe is paradise.