After a blissful two weeks off, it was time to head back to work. Zero complaints though, as it was back stateside to a new destination of Seattle! Departing Dubai at 9:30am, it was 14 hours and 10 minutes over to Seattle – Tacoma International Airport.

Landing around lunchtime, we headed through immigration and made our way over  to the hotel. The 11 hour time difference between Dubai and Seattle is quite tough and I forced myself to stay awake and not go to bed after check in despite not sleeping a wink in the crew rest on the flight. I had arranged to meet two of the other economy crew girls downstairs for a bit of a wander into the city and to find something to eat. 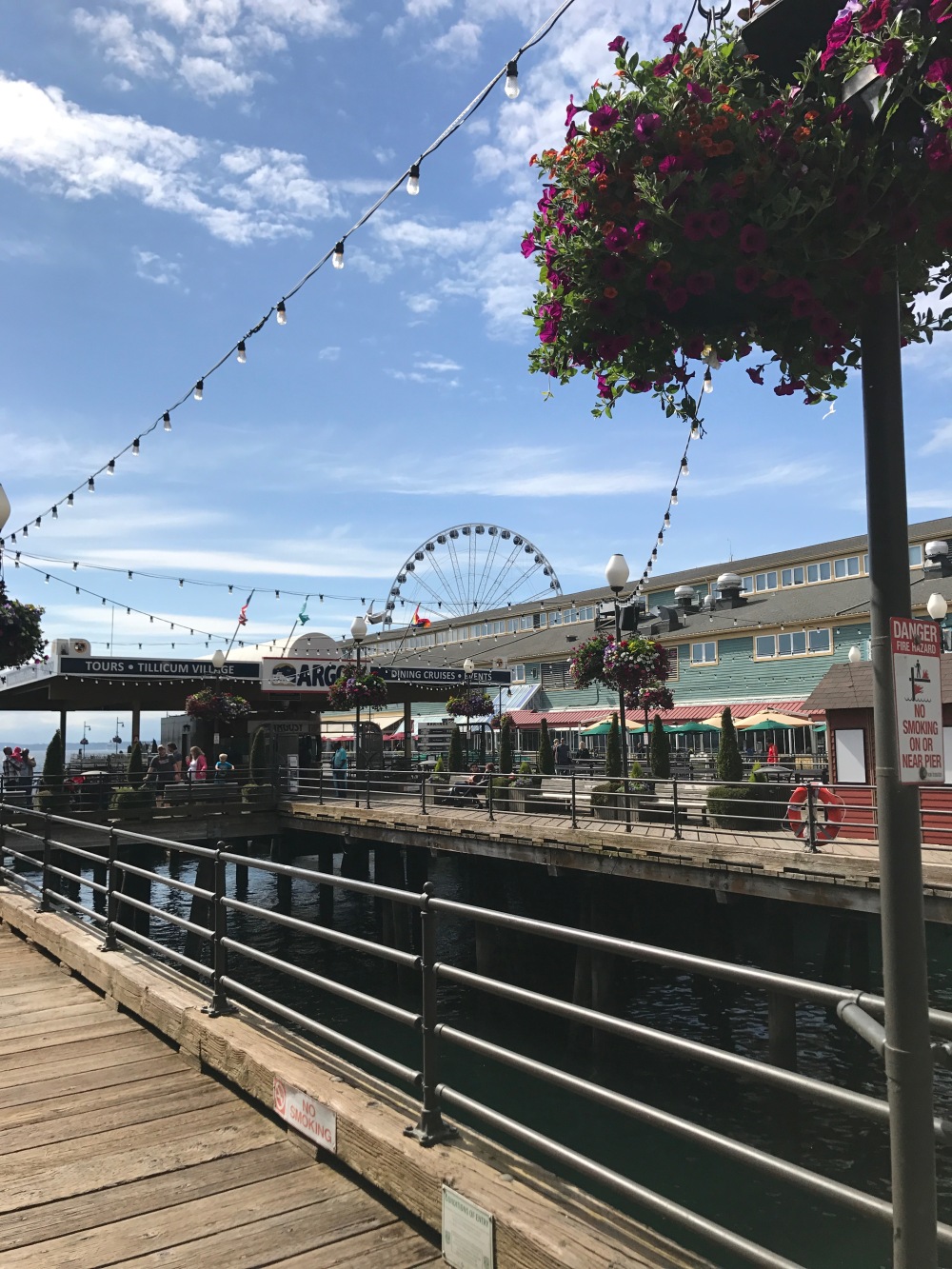 We made our way down the steep hills of the city, wondering how on earth we were going to manage our way all the way back up them after an afternoon of exploring. With it being a Saturday afternoon and a really sunny beautiful day, the area was packed with locals and tourists going about their weekend activities and taking in the beautiful views. The waterfront was similar to that of San Francisco with its many different numbered piers, however there seemed to be a much happier vibe around Seattle. I think the weather definitely helped though in comparison of my trip to San Fran! We actually stumbled across a parade, I’m not entirely sure what the parade was for but it was great fun watching all the performers in their interesting costumes singing and dancing along the way. They were making such a great noise that you actually heard them before you saw them.

Before my trip I’d been researching what there is to do in Seattle and one thing that intrigued me most was ‘The Bubble Gum Wall’. Now if you’re unfamiliar with what this is, it does exactly what it says on the tin. Its a wall made up of entirely bubble gum. So buying some bubble gum ourselves to add to the wall, we made our way over there.

The alley way was absolutely packed out with people taking pictures. I’d been warned that you would smell the wall before you would see it, but I actually couldn’t smell a thing? And this was a warm summers day! I’ve gotta say I was impressed with this, many people had messaged me to say how gross this was, but I just couldn’t believe not only had this thing been created, and continued to grow, that it was actually a tourist attraction that many people were flocking to!

The gum wall resides right by the famous Pike Place Market. The market opened in 1907 and is one of the oldest continuously run farmers markets in the whole of the United States. However, I wanted to spend my Sunday morning here getting groceries and getting a real feel for the place, so we walked past in search of the original Starbucks.

The girls weren’t avid Starbucks fans and when we got there, to no surprise there was a huge queue snaking out the door which looked like it would take some time to work through. With our stomachs rumbling, it seemed the best option was to search for food and I would come back tomorrow to Starbucks by myself.

Wanting dinner with a view and definitely some fresh seafood, we went back towards the waterfront. After much debate (crew life) on where to eat, we had chosen a place called Ivar’s Acres Of Clams which boasted a wide menu and also happy hour! I opted for the Pier 54 Cioppino which was a selection of clams, mussels, prawns, salmon, halibut and cod simmered in a tomato fennel broth served with grilled essential bakery bread and topped with a king crab leg. It was absolutely heavenly. If you’re a great lover of seafood, definitely check out their menu as it took me a while to actually choose what I wanted from all their choice!

Feeling very full and content and it now being the morning in Dubai and us awake over 24 hours, we walked back up the steep hills to the hotel and collapsed into bed.

I woke up around 5am probably due to jet lag and got changed and headed down to breakfast. I needed some energy for my big day of sightseeing ahead of me, however, when I got back up to my room to collect my belongings for the day ahead, I actually managed to sleep another 5 hours before I made my way into the city. Cabin crew life, ey?

First stop was Starbucks as I needed that coffee pick me up for the day and I wanted to see where it all began. During sixth form, I actually wrote a report on the rise of Starbucks from a small coffee shop in Seattle to a global brand which is recognised by many around the world. So I actually had a lot of background knowledge on the company and it was nice to once more take my studies from the page to the place.

It was time to head into the market, I had seen so many people wandering around clutching the most beautiful bunches of flowers and in particular peonies (my favourite flower) which had caught my eye. I wanted to take some back to Dubai with me, but I thought it would be best to buy them the next day so they’re a little fresher ahead of our long and dry flight.

Wandering around the completely packed out market everything to anything was being sold. It went over a multitude of floors, each level just as equally as busy as the last and there was always something to try or watch. The fish stands were really entertaining and were throwing huge fishes around between each other and making it looks as though the fish on the ice were actually real, all the while selling to customers and offering prawn cocktails and fresh mussels. It was nice to just wander around at my own pace and see everything that was going on. 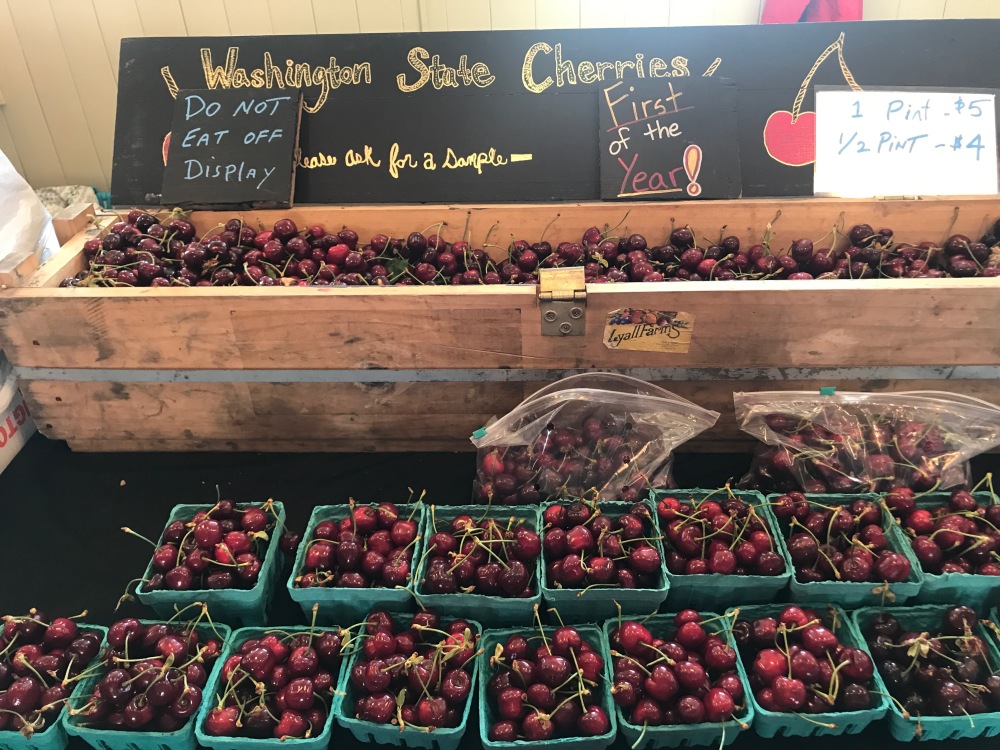 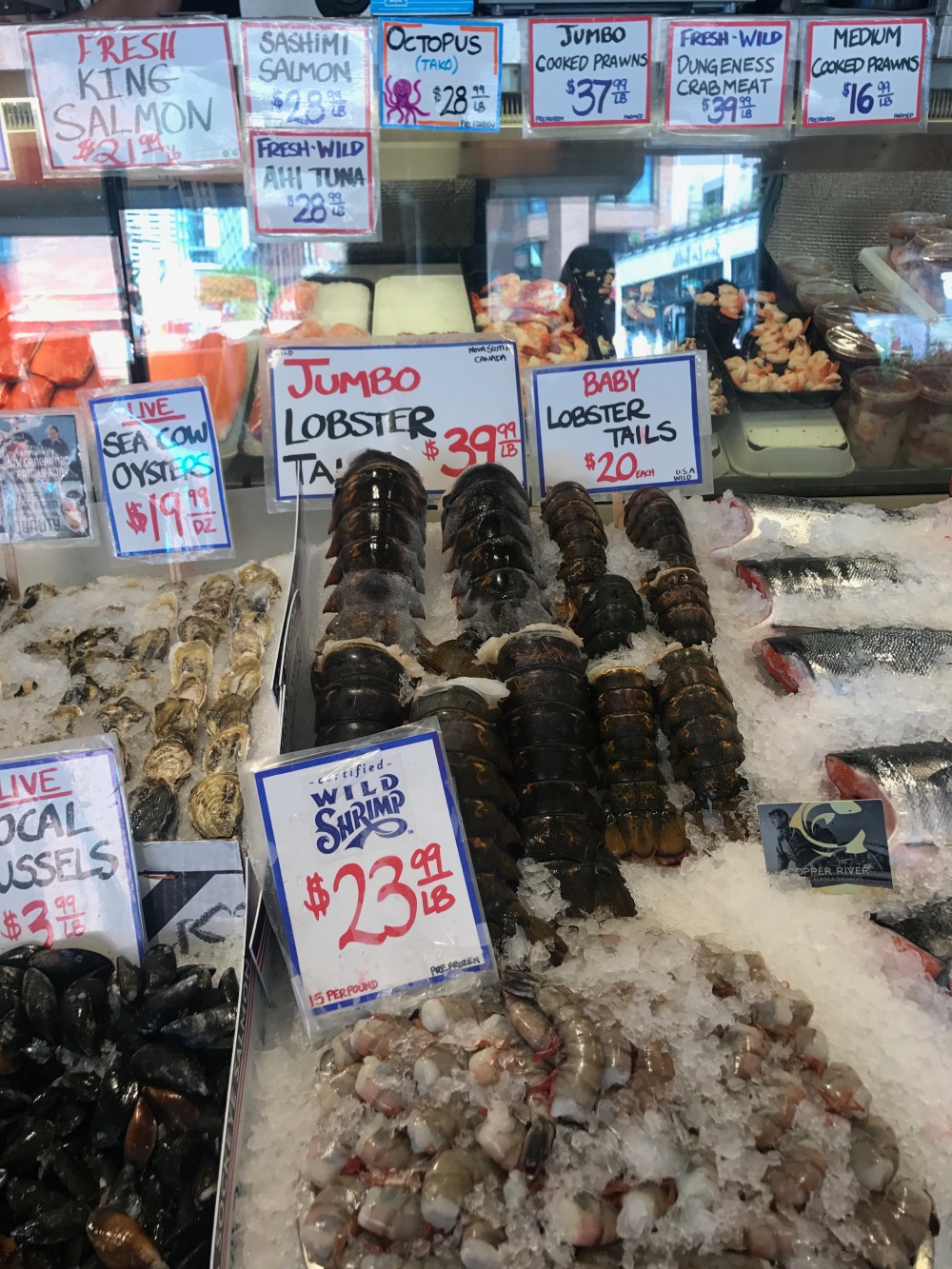 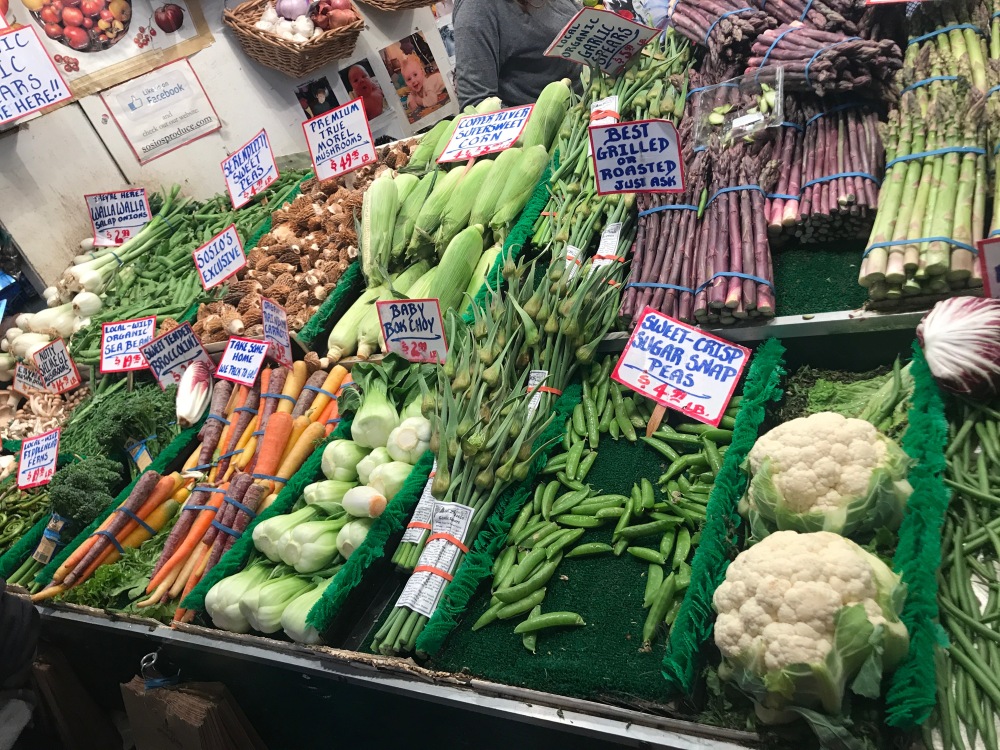 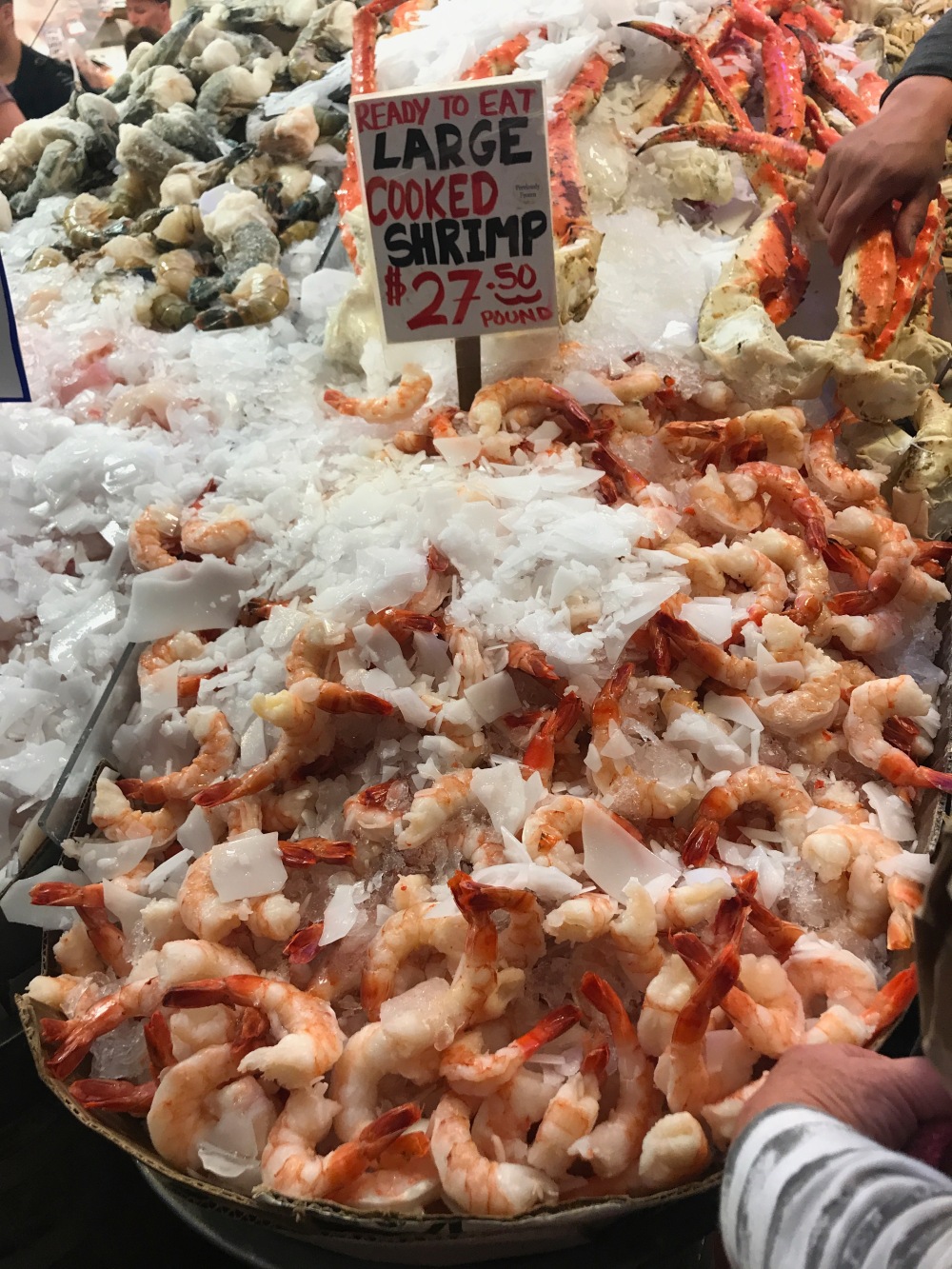 I would have loved nothing than more than for this to be my local market where I could buy my produce to make the most delicious meals. A real selling point of Seattle in my eyes. After this, I had decided to go over to the Space Needle which is a high rise viewing tower looking over the landscape of Seattle. The concierge told me I should take the train over (classic American) but it was a nice 20 minute walk through the city in the sunshine and it wasn’t exactly hard to work out the way!

Heading up it was $29 for a ticket to the top which included an awkward souvenir photo. The views from the top were incredible with it being such a clear blue skies day and I wandered around taking in the view, and also being asked to be everyone’s photographer. I honestly should of started charging haha! 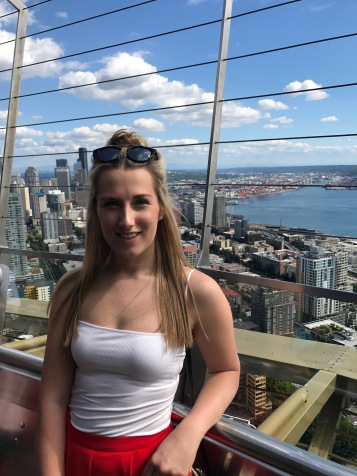 Inside were these huge screens with a world map and a list along the side of everyone who had visited! It also gave you the chance to add yourself to the list, so I added myself and Dubai onto the map. It seemed there weren’t many visitors from the UAE!

Venturing back down to the bottom, it was time for a bit of shopping. Its always great in America and they had some good sales on before I realised that it was 6pm and I hadn’t actually eaten since my breakfast at 6am that morning! A day in the life of a busy tourist!

Quickly googling some good places to eat in the city, I saw that they had a Din Tai Fung. If you read my post on my trip to Taiwan you’ll see I visited the birth place of Din Tai Fung here. We also have one in Dubai but their Xaoi Long Bao is my absolute favourite and I couldn’t resist tucking into some tasty dishes here before I made my way back to the hotel.

The next morning I had great plans of waking up to buy some flowers to take back to Dubai with me, but all hope was lost when jet lag and exhaustion took over and I actually woke up at 2pm for our wake up call back to Dubai. The flight back was great and we had the CUTEST little passenger, 14 month old Aziz, who kept me company for almost the entire 14 hour flight. He was such a little sweetie and enjoyed dressing up in our cabin crew waistcoat and tie!

I had a really great trip to Seattle, and it’s layovers like this one where I don’t feel like I’ve even gone back to work. I would be very happy to see Seattle on my roster again! As always, feel free to follow me on Twitter and Instagram for more daily updates:
http://www.twitter.com/Jessicaaahhh
http://www.instagram.com/Jessicaaahhh