So my leave plans came together quite nicely actually! I was meant to be going to Hawaii with my room mate Hannah but as she fell and broke her wrist, our plans also fell through and I was left wondering what to do for two weeks. My two friends who I studied abroad with Katie (from the United States) and Sophie (from Australia) were meeting up for the first time since we left Kansas and had planned a trip up to Cairns in Australia. With it being the perfect opportunity, and me being able to explore a new destination not within the Emirates network, I jumped at the chance especially with all three of us being together a real rare occurrence. Another thing that was great was that on the International Day of Happiness ( 20th March ) Emirates gave all its employee a free return ticket to ANYWHERE in the world. So I thought that a free 14 hour flight to Sydney sounded perfect. THANKS EMIRATES ❤️ 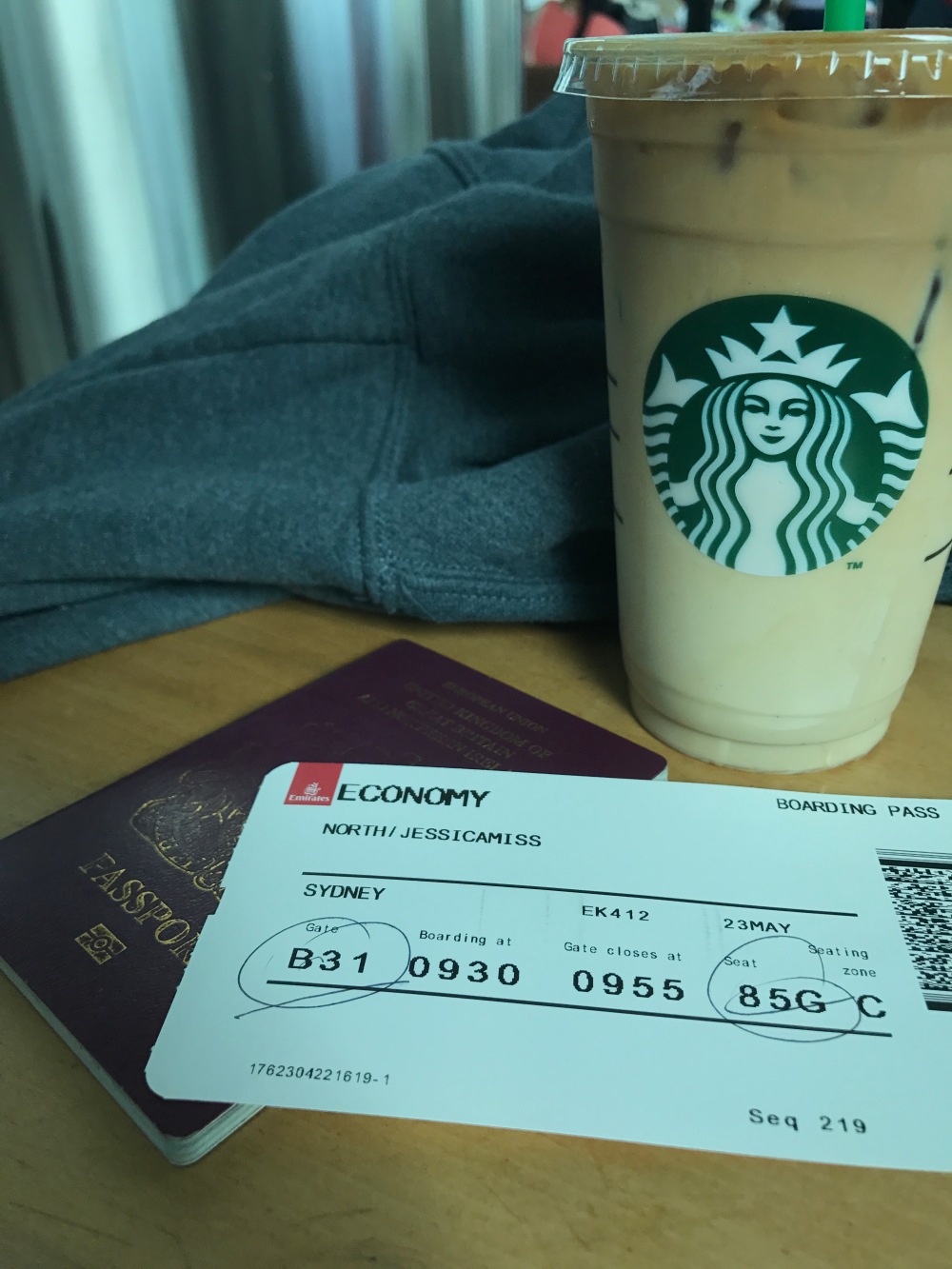 I’d never actually done such a long flight by myself and was worried I’d get very bored, but as I was a little jet lagged from LA (read up on my post here) I hadn’t actually sleep before my 10am departure out of Dubai over to Kingsford Smith. With a light load and ground staff giving me a whole row to myself (work perks) I actually managed to sleep for 10 hours of the flight, so the final four hours seemed like absolutely nothing! Landing at 6am, I had a 6 hour stop over before my next flight with Qantas up to Cairns.

Before I even go on to discuss my holiday, can I put into words how excited/interested I was to fly on a different airline other tha n Emirates? For the past 2 years almost I’ve flown exclusively Emirates on 246 flights both as crew and as a passenger (imagine if I got frequent flyer points) and for the life of me, I couldn’t remember what happens on other airlines. 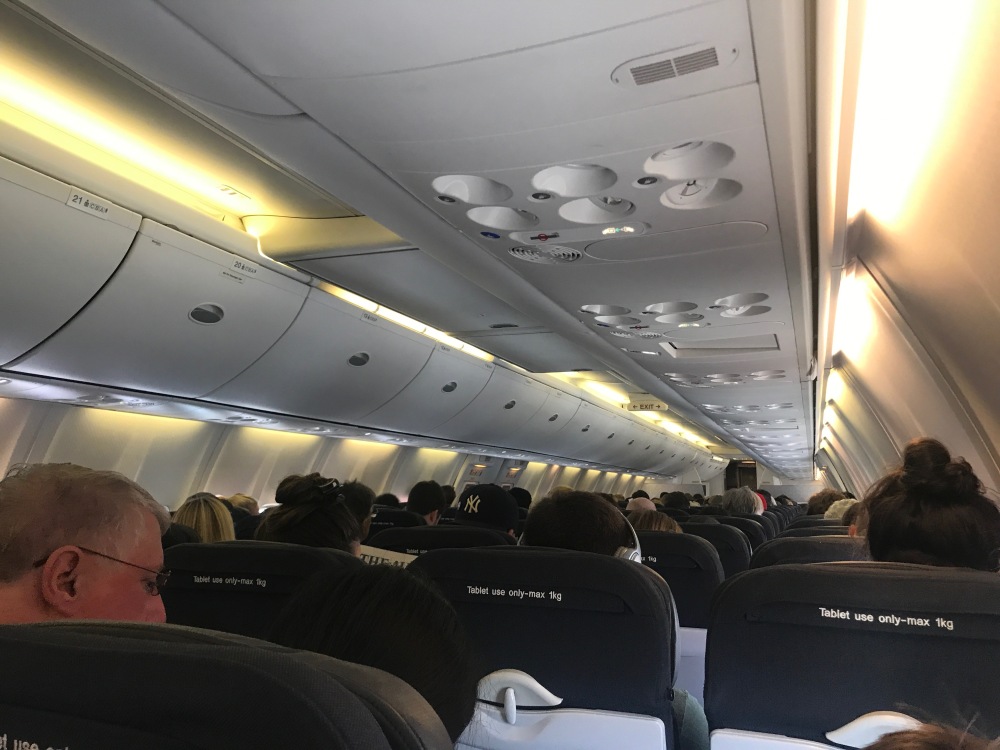 The flight up to Cairns was 3 and a half hours on a Boeing 737, and it felt like such a tiny little plane in comparison to the Emirates fleet, you can really feel each little bump a lot more as it was quite turbulent flying out of Sydney. 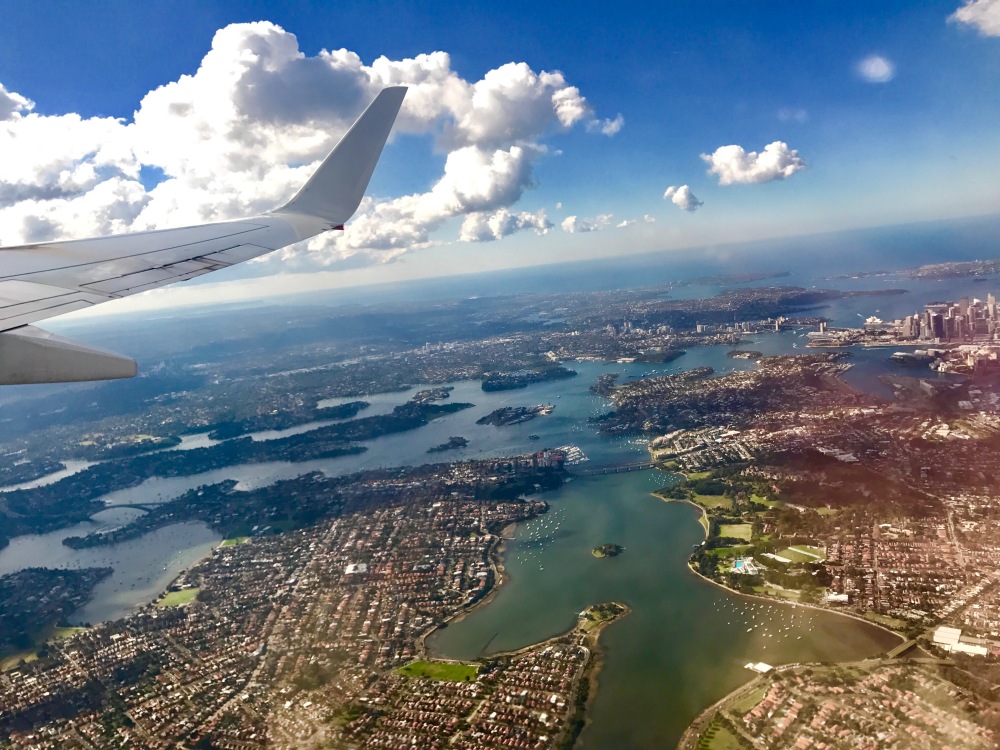 Landing into Cairns was beautiful. You could see the turquoise waters coming into land paired with the white sandy beaches, yet it had a lush green tropical looking backdrop. I hadn’t even thought that Queensland would be like this. 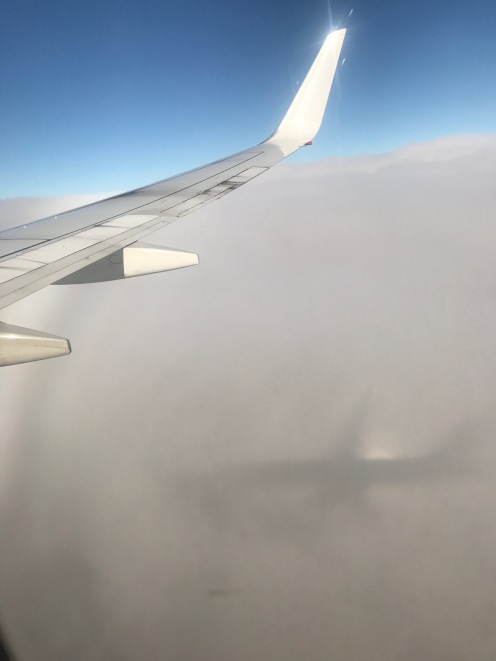 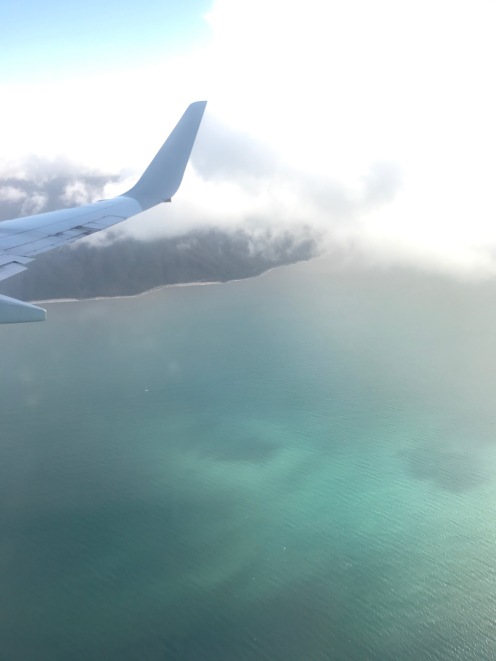 Touchdown in Cairns and my long 24 hours of travelling was finally over and I was beyond ready to jump in the car and arrive at our first stop of the holiday: Palm Cove. Just a short 30 minute drive and we had booked for 2 nights in an AirBnB which was really cute and great value! 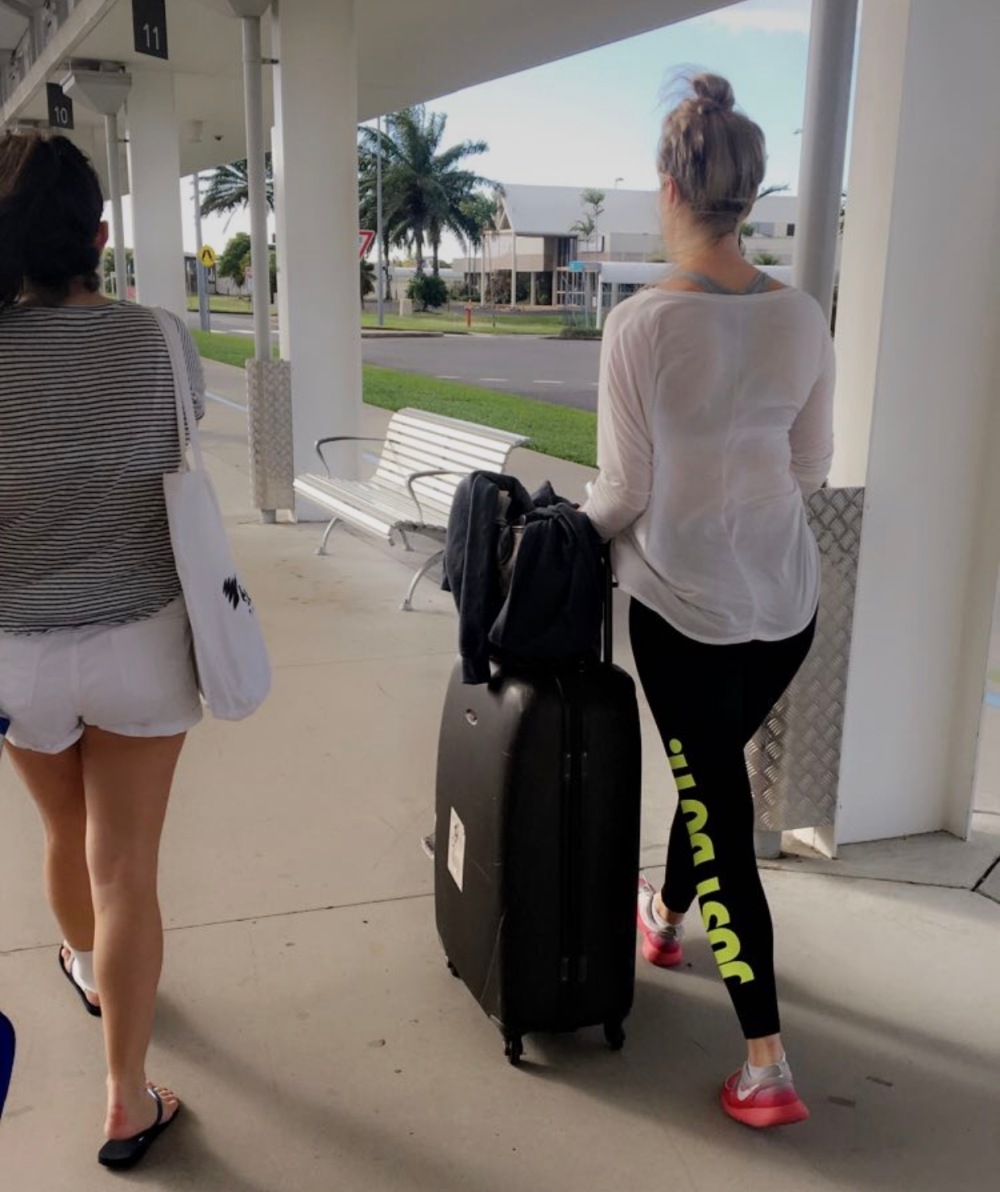 We unpacked and got ready for dinner that evening and after a walk along the beach front we decided on a place called Jack and Shannons for the most unbelievable meal. 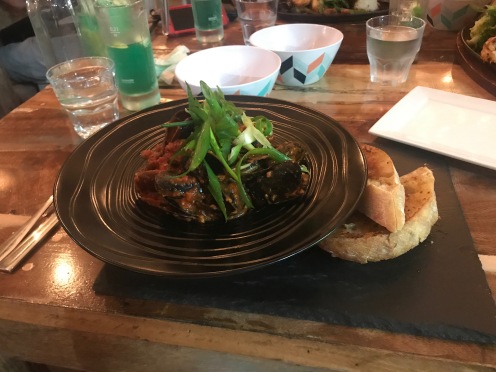 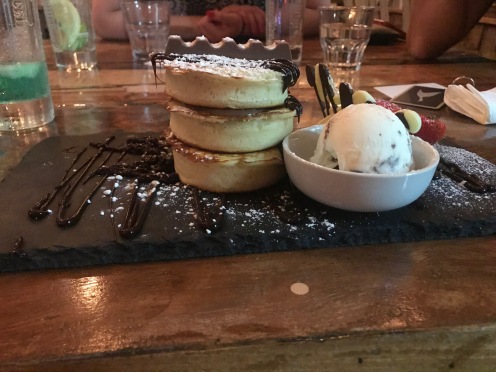 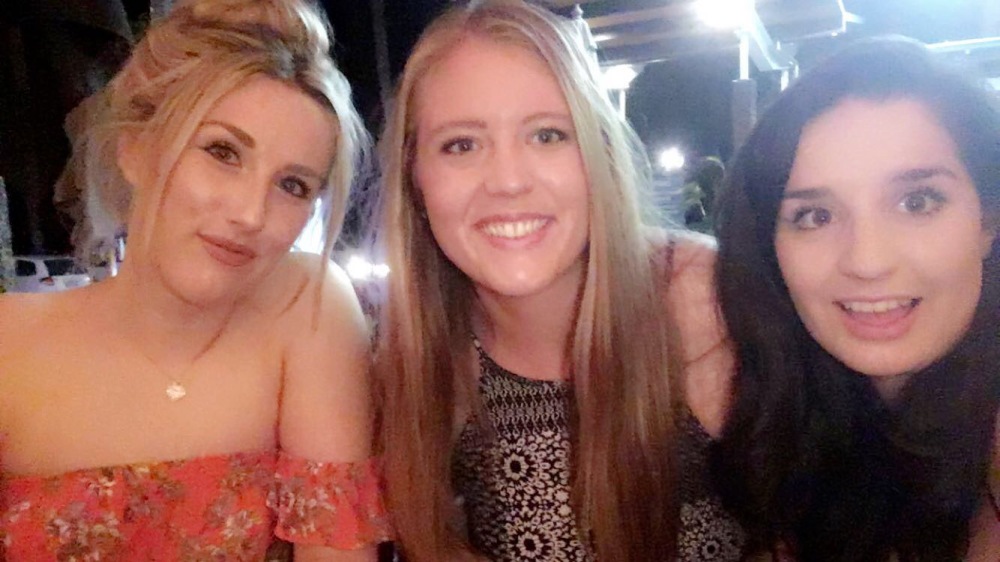 Feeling incredibly full after some amazing mussels and Kinder Bueno pancakes and also feeling the effects of lots of travel, I was beyond ready for bed and we had agreed on an early get up to watch the sun rise. 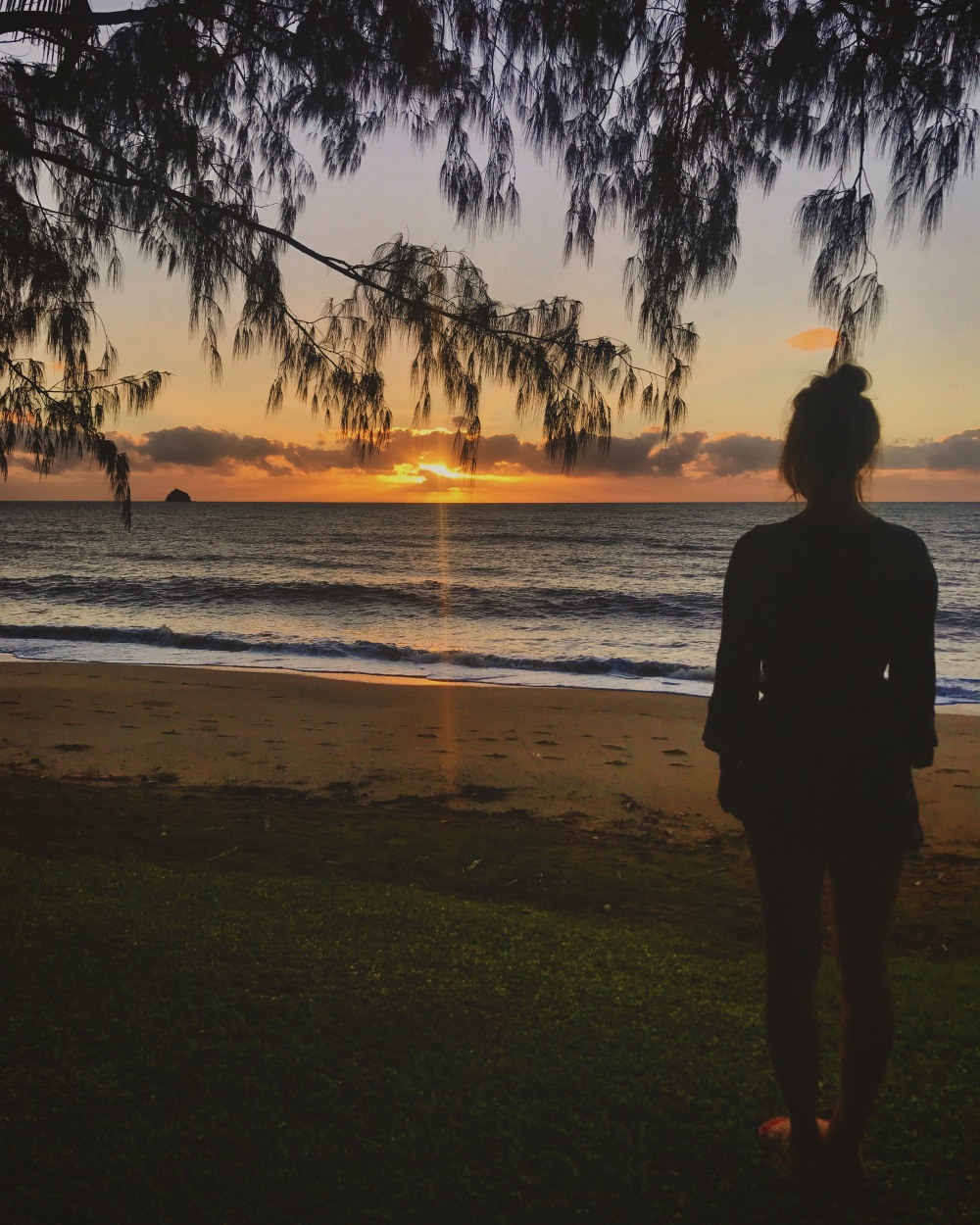 Our plans for the day were to drive up to the Daintree Rainforest which was around a one and a half hour drive from our accommodation. I’d never been to a rainforest before, and after some extensive googling before the trip there was plenty of things to see and do! On the drive up, we took a bit of a detour following signs for the Daintree River and we ended up at a croc creek cruise that was departing in 30 minutes. Paying $28 each for a 1 hour journey up the creek, I was excited to see some crocodiles in their natural environment. 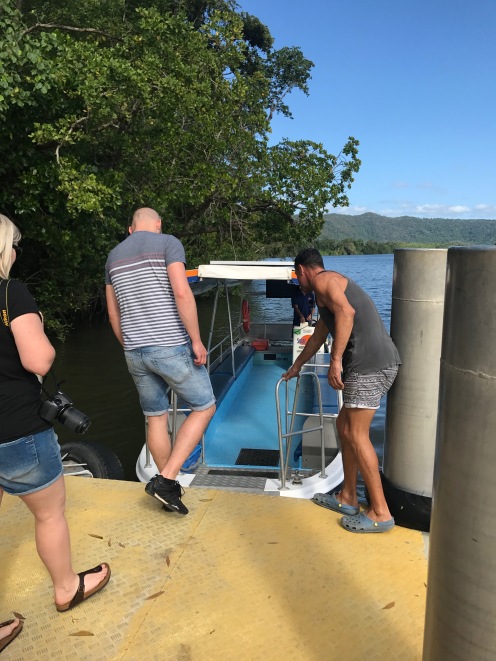 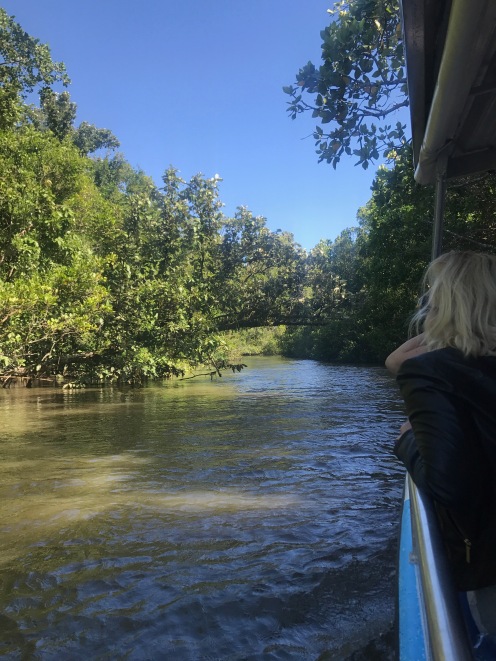 Riding up the creek, we saw the tiniest cutest little crocodile (around 2 months old) just resting on a branch. As crocodiles are reptiles, they require using the suns heat for energy. So many of them either lay out on the banks if they’re fully grown, or the tiny ones are able to climb up on the branches to fully bask in the sunshine. 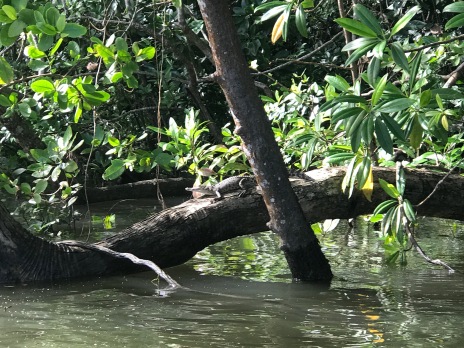 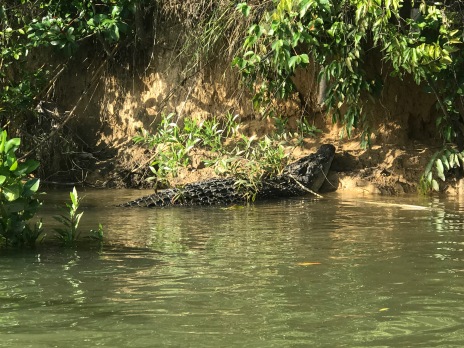 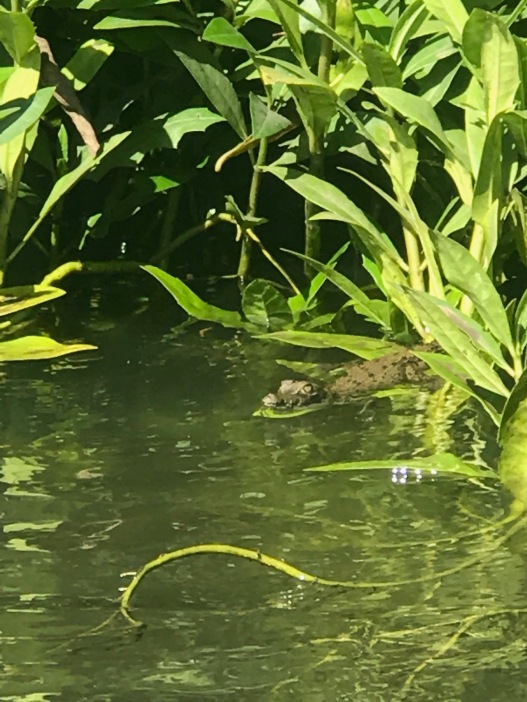 Jumping back in the car, we headed further into the rainforest to go to a look out point the owner of the croc cruise recommended to us. 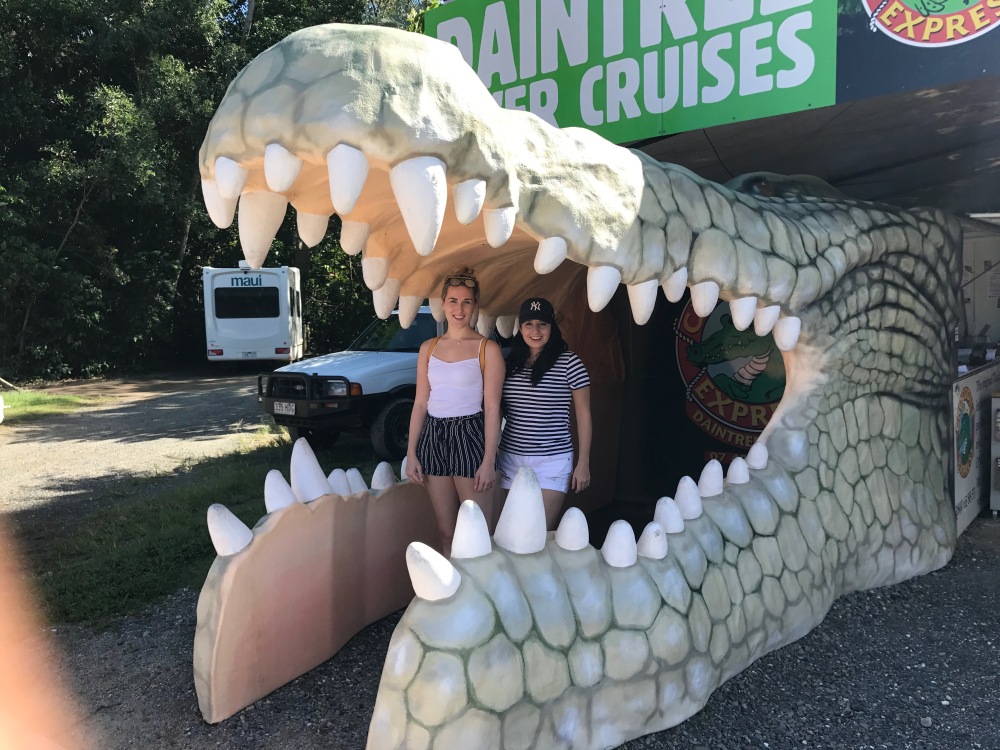 The drive was lovely, intricate windy roads through the rainforest and we even had to use a ferry to get across the river. After around 20 minutes of driving, we parked up and jumped out the car to the most spectacular view of the river winding into the ocean. 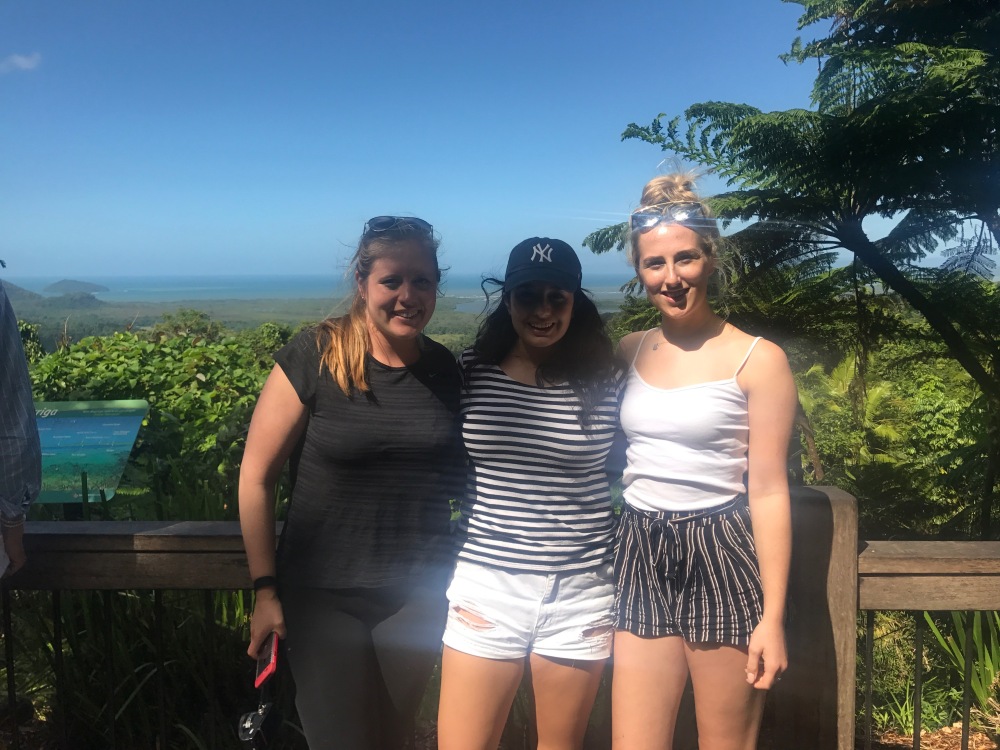 Moving even further into the rainforest we wanted to do a rainforest boardwalk, it said it would be a nice 45 minute walk except we managed to complete it in just 14 minutes… anyway! Walking around we saw a huge colony of bats above our head just hanging away upside down before they all fluttered away making such a racket! 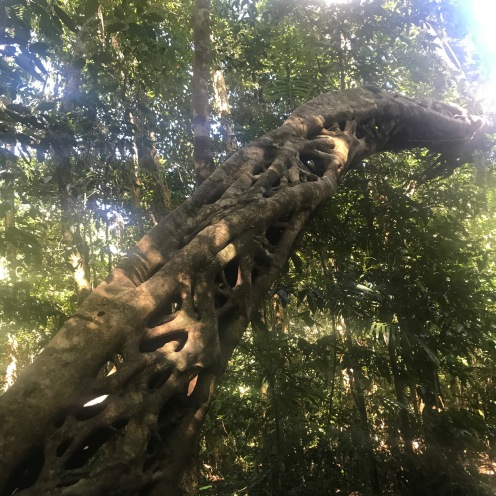 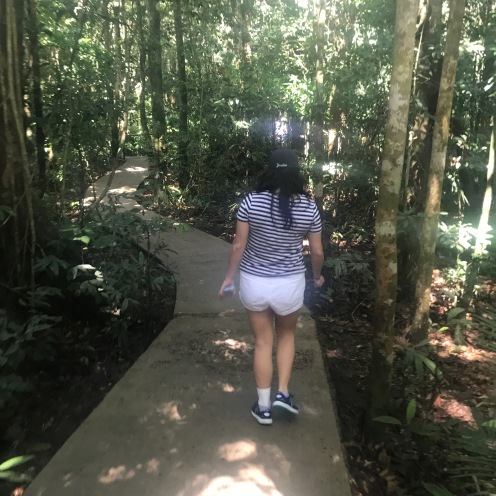 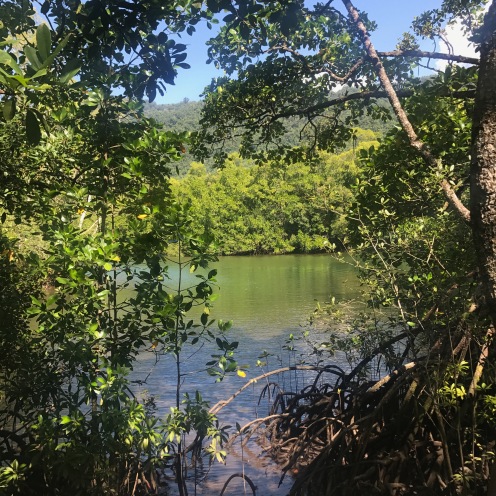 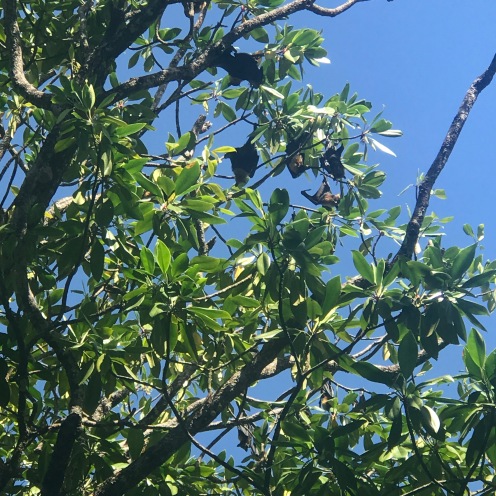 Finally it was time to stop for lunch, having being over 6 hours since breakfast we found a cute little place along the beach front with the most AMAZING beach! We ordered burgers and grabbed a table outside, before heading out onto the beach to take in the views. 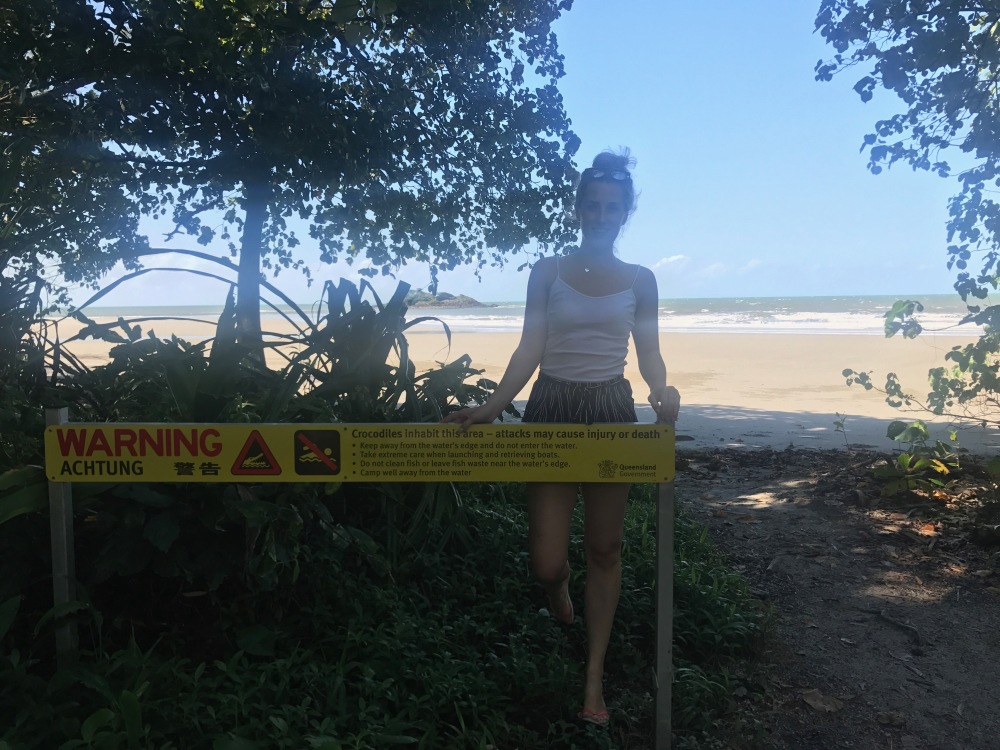 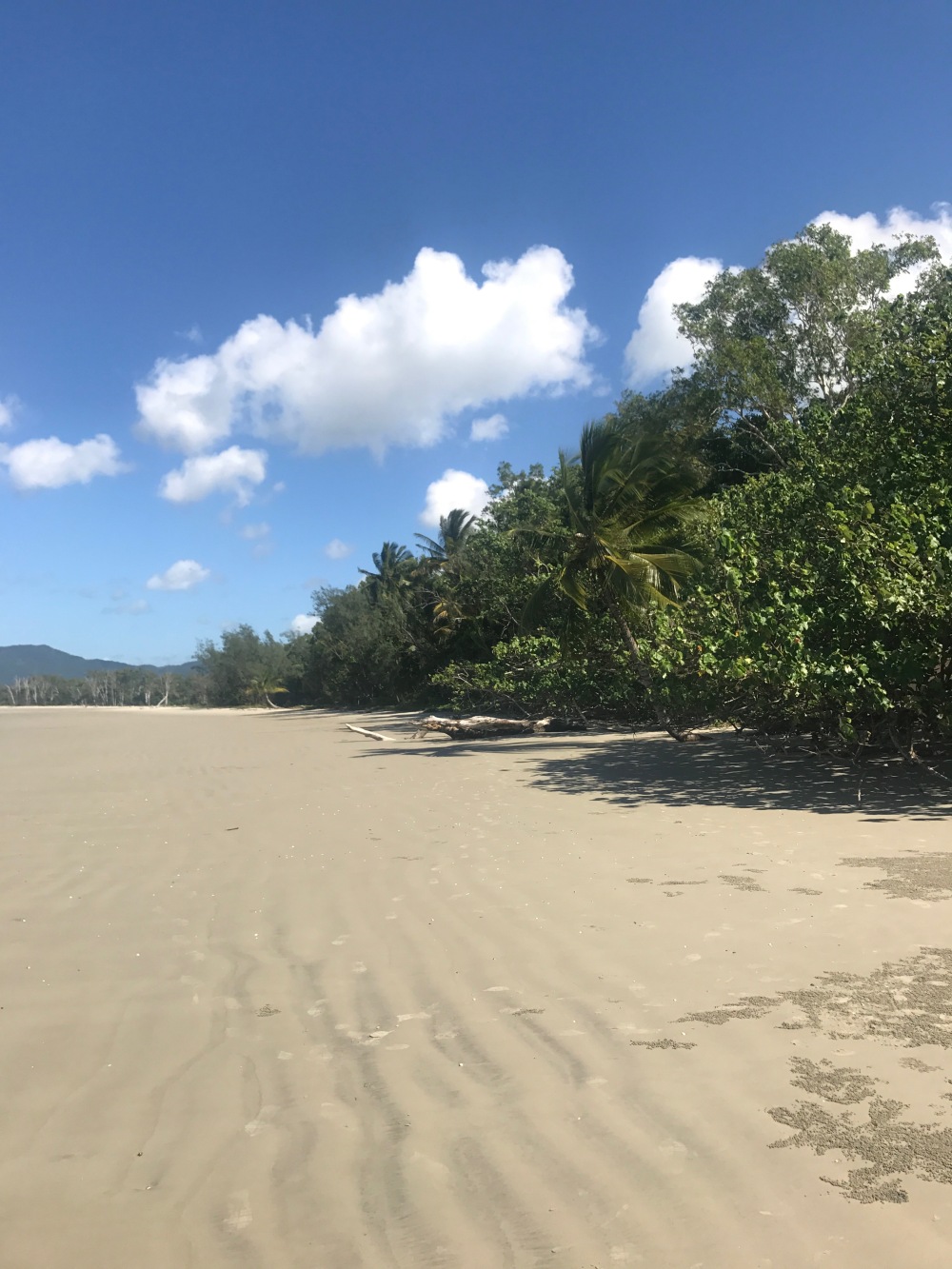 After a leisurely lunch we drove back out the rainforest and down to Port Douglas as Sophie had heard great things about here. Parking up at the beach, we were ready for some sunbathing. To me, it seemed like an incredibly mediocre beach and at only 20 degrees with what felt like gale force winds I was absolutely freezing. Wrapping my towel around me didn’t seem to help, so I left them two on the beach and headed to a nearby cafe for a coffee to warm up. The barista did laugh at me and said, with an accent like mine how can I call this cold? He soon stopped laughing though when I told him I lived in Dubai and its reaching 42 degrees through the day now haha! 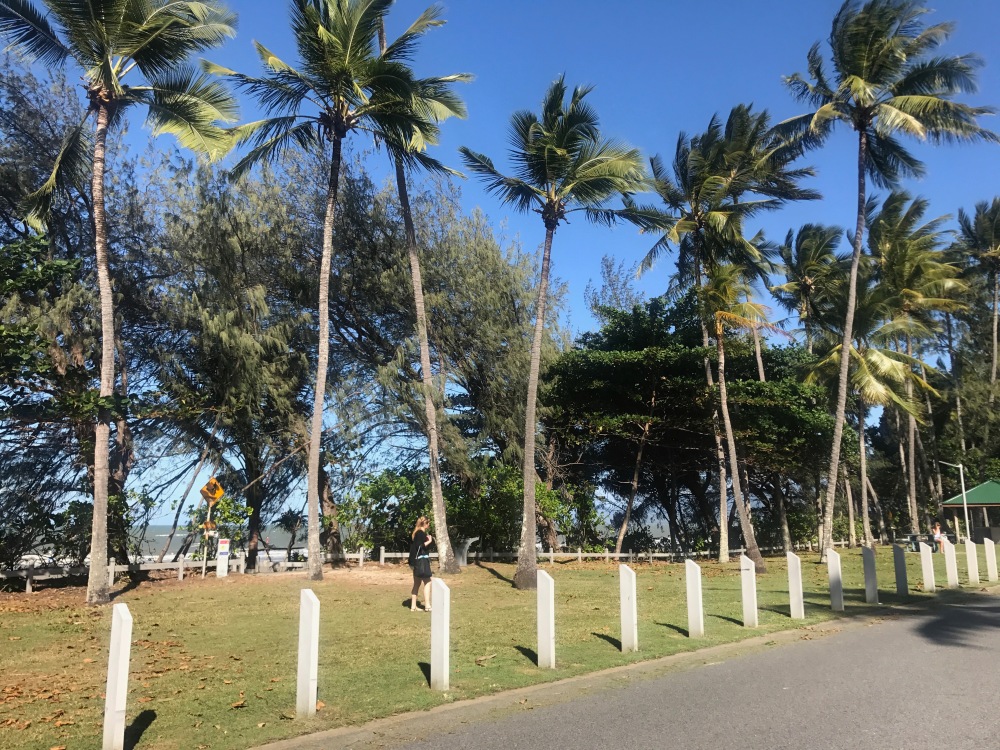 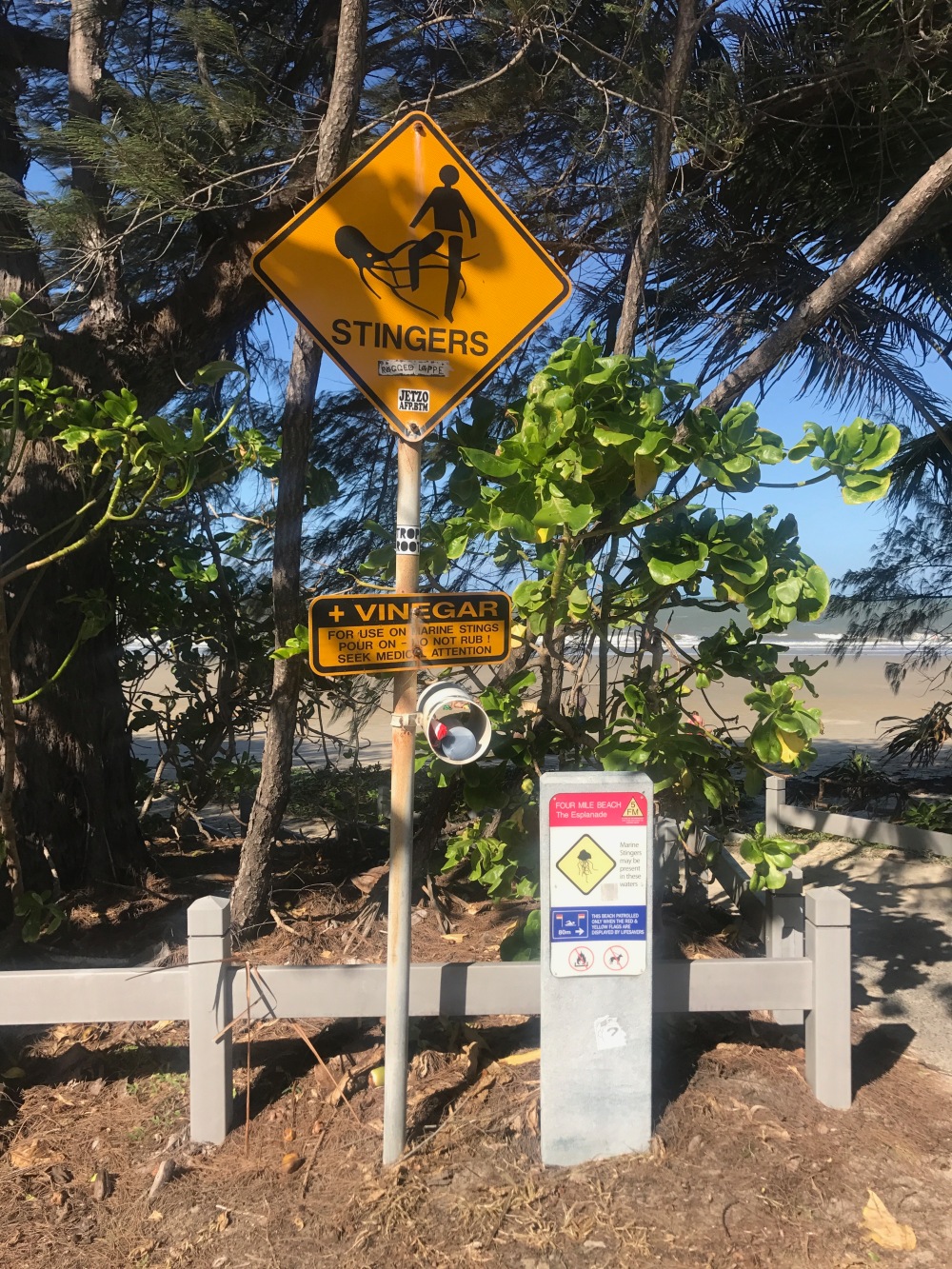 A much shorter than intended stop at the beach, we made our way back to Palm Cove to get ready for dinner that evening.

The next day was dedicated to laying out on the beach at Palm Cove before we drove back down to Cairns for our next stop of the trip. However, there were signs everywhere saying beware for crocodiles, so I was always keeping my eye out for a croc sneaking up on us! 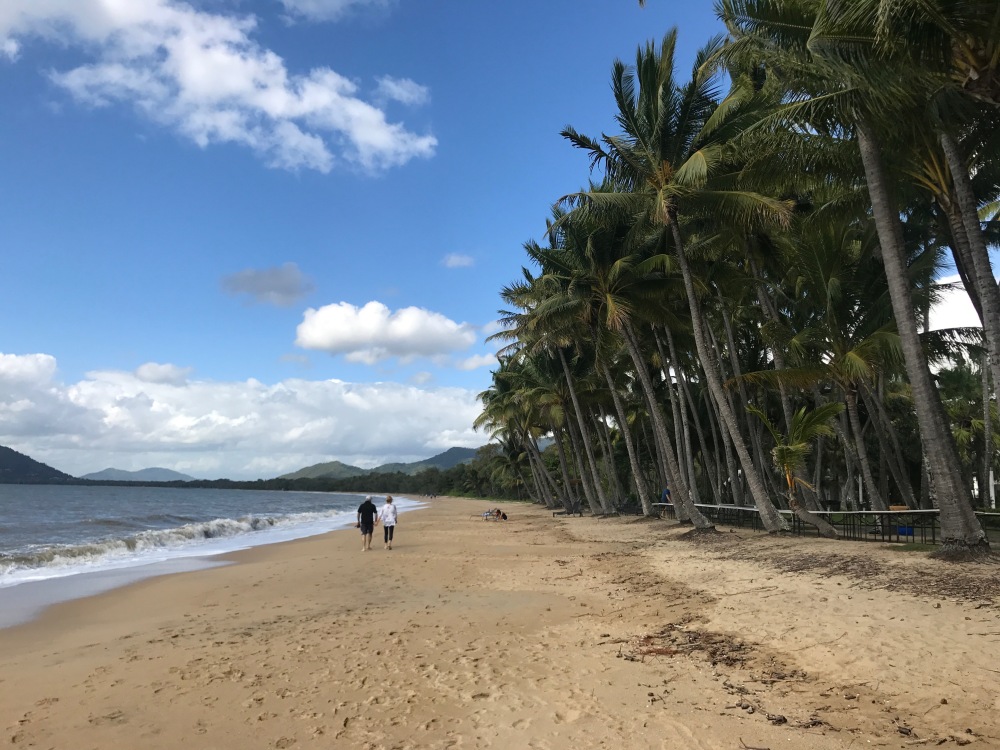 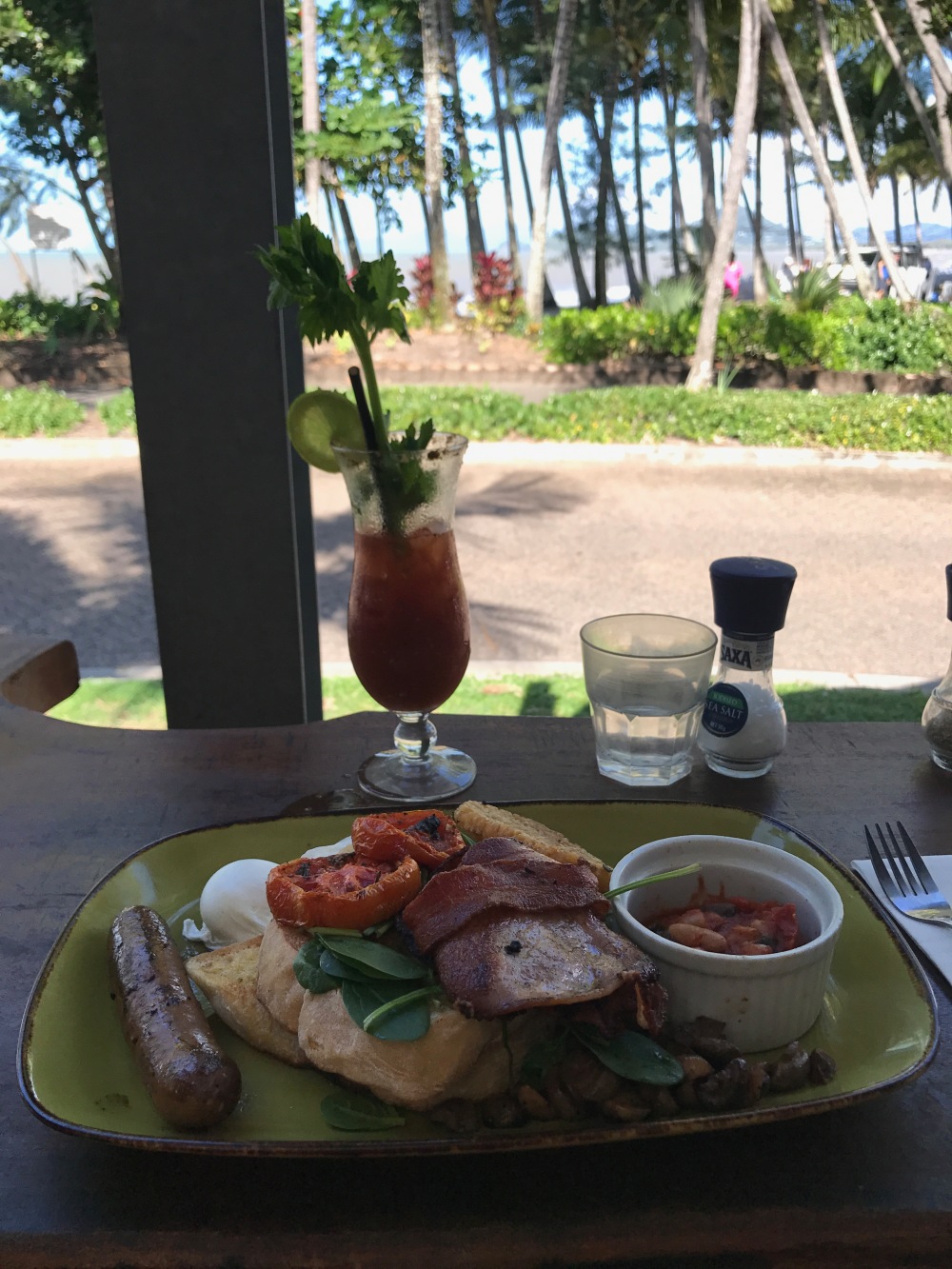 Enjoying breakfast with a Bloody Mary for brunch, when on holiday ey? We threw all our things into the car before driving down to Cairns. Now, here is where I’m going to be honest with you. I think I earned title of idiot of the year here. So, when booking the hotel for Cairns I’d been looking up deals online and found a great one for the Double Tree. I’ve stayed at the Double Tree a few times and thought it had a great location in the city. Except, when I went to check in the receptionist told me my booking was for June. Now you would think that I booked this for the same dates just a month later, except, I had managed to book the hotel for two completely random dates in the next month. What on earth was I thinking?! However, after making a call to Expedia and them liaising with the hotel, we were able to change our booking to the current day – hallelujah! We did laugh about this after I promise!!