Many apologies for my lack of posts recently, I feel like my rosters have been in shambles. There was no post on Dublin as I managed to swap to a Manilla so I could see Justin Bieber, however I was incredibly ill in Manilla. And due to delays in Manilla that resulted in me being pulled off my Nairobi layover which I had been so looking forward to as I wasn’t going to have minimum rest. However, we’re all back to normal now and my layover shall resume.

I was originally rostered a 30 hour layover in Boston, however, as my friend wasn’t going to be there I sent out a few swaps for other US destinations that I hadn’t yet visited and someone accepted my swap for LA! Departing out of Dubai at 8:50am it was a 15 hour and 20 minute flight over to LAX. The flight over was nice, we got a good 3 hours and 40 minutes rest in the CRC. I had one very special passenger, a three year old girl called Carlotta. She was from Venezuela and could speak THREE languages. She was so polite and liked asking lots of questions about being cabin crew, she made the flight seem much less than 15 hours!

Landing at 2pm we made our way through immigration and over to the hotel. By the time we made it to the hotel and I had changed, it was almost 5pm. Not one of the crew was keen to explore LA with me, and as you probably know by now I NEVER let that stop me. So when they met down for dinner and drinks that evening, I went to grab my essentials from CVS that I can only get in the states and took my favourite Buffalo Wild Wings back to eat in bed for an early night ahead of exploring. 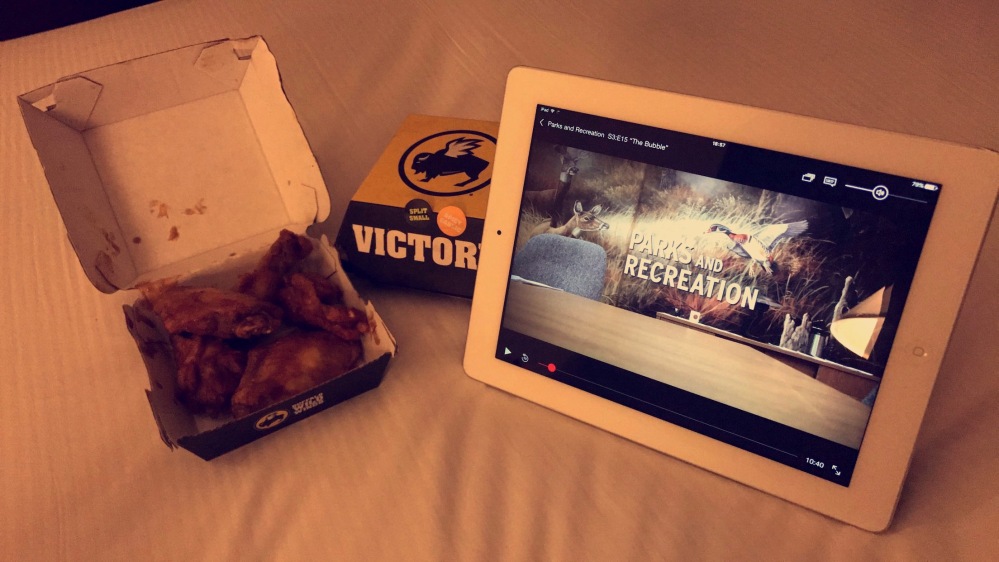 Waking up at 5:45am the next morning (jet lag problems with the 11 hour time difference) I skyped my parents before making my way into Los Angeles. I took an uber over to Venice Beach and I had booked for the Hop On Hop Off Bus Tour.

First thoughts on Venice were that I thought it was really run down and tacky, I was a bit disappointed as I’d heard and seen so much about it, when in reality it reminded me of Blackpool in the UK. Yeah it had the lined pam trees but that was about all it had going for it. Muscle Beach, where Arnold Schwarzenegger used to train in the 80s didn’t really have a great beach view but kind of rusty gym gear with the odd person training. I thought it would be rather busy and bustling but not quite so. 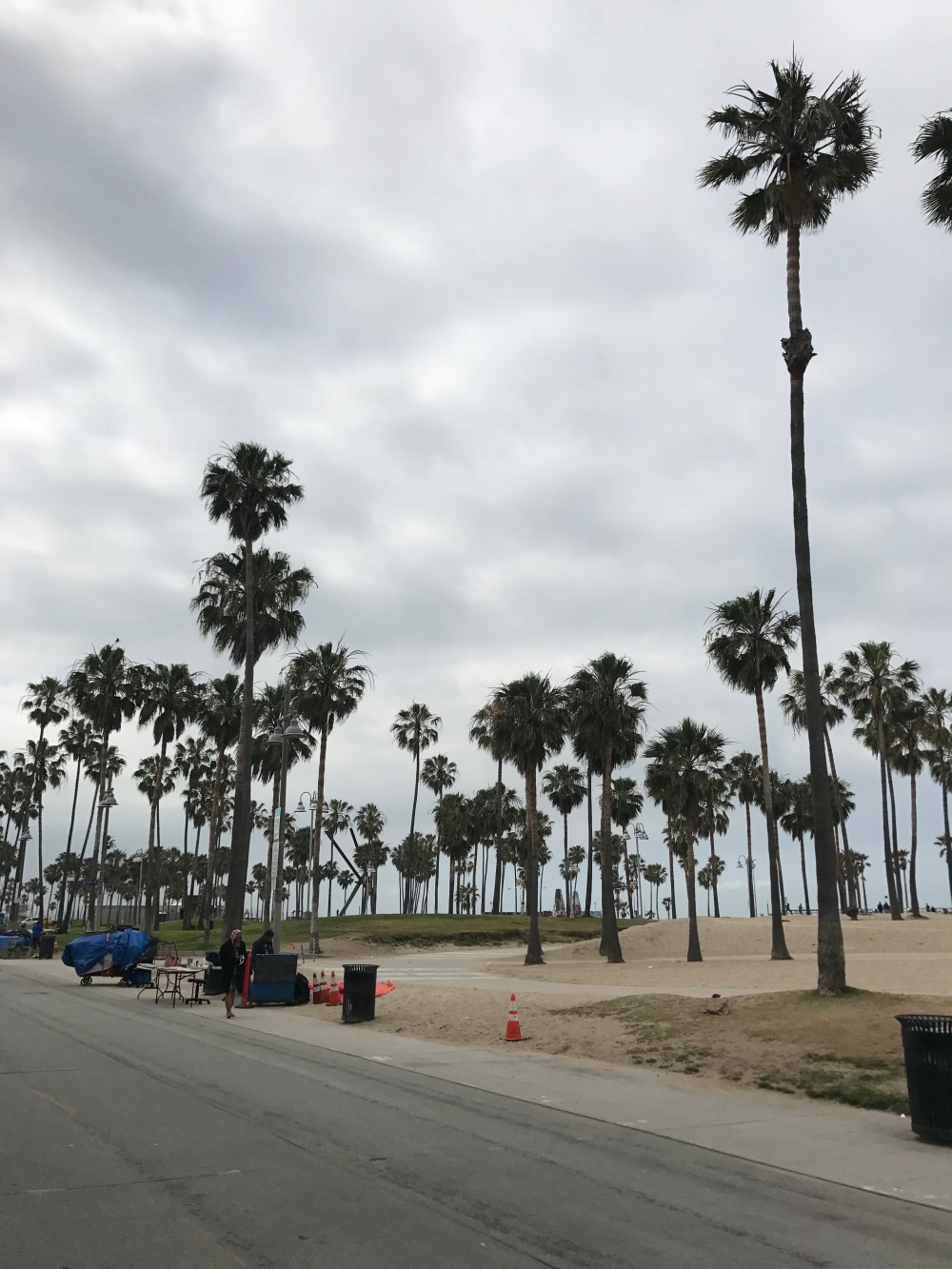 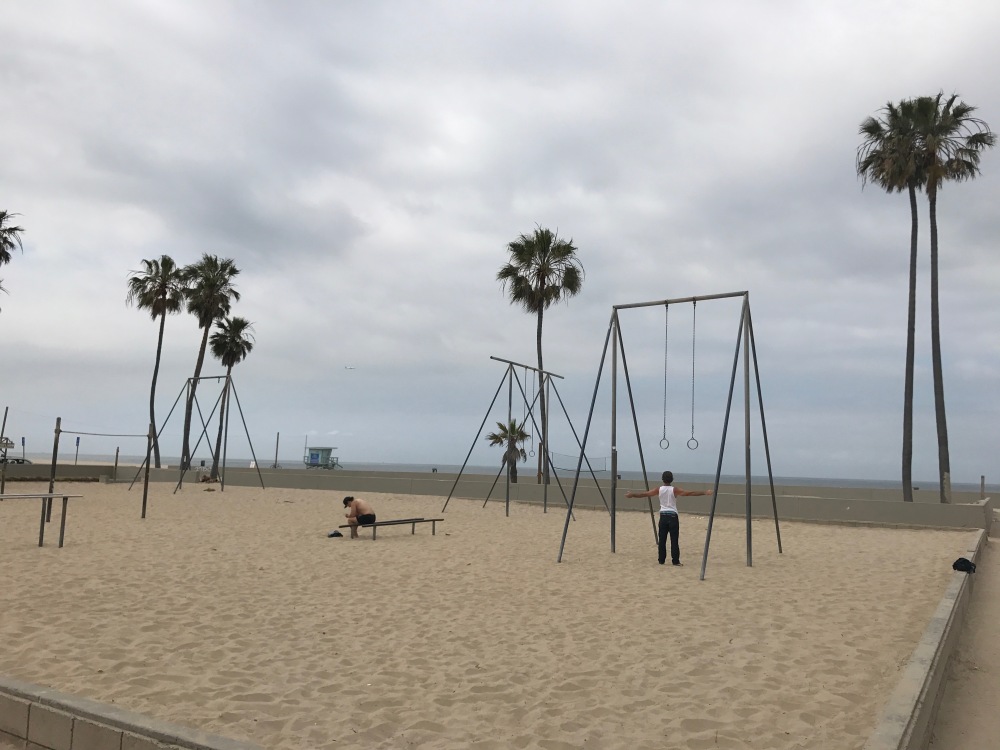 The weather was pretty cloudy that morning and the sun was struggling to peak through, so I was glad to have brought a jumper with me which I threw on over my sun dress. Talk about wrong clothes for the weather. Not spending much time down here and keen to move on and warm up, I headed to the nearest bus stop and jumped on in the direction of Santa Monica.

The tour was very informative, we were given headsets and told lots of different information and facts of places we were driving by. Heading to Santa Monica I was able to connect to the different coloured route. As the sun still wasn’t shining and there was only a couple of minutes to wait for the next bus, I decided I would come back down to the beach later that afternoon when the sun was shining instead.

The next stop was Beverly Hills, as a big fan of the show 90210 I was really looking forward to seeing the place and it honestly didn’t disappoint. My first place to visit was the Beverley Hills Garden with the famous sign. 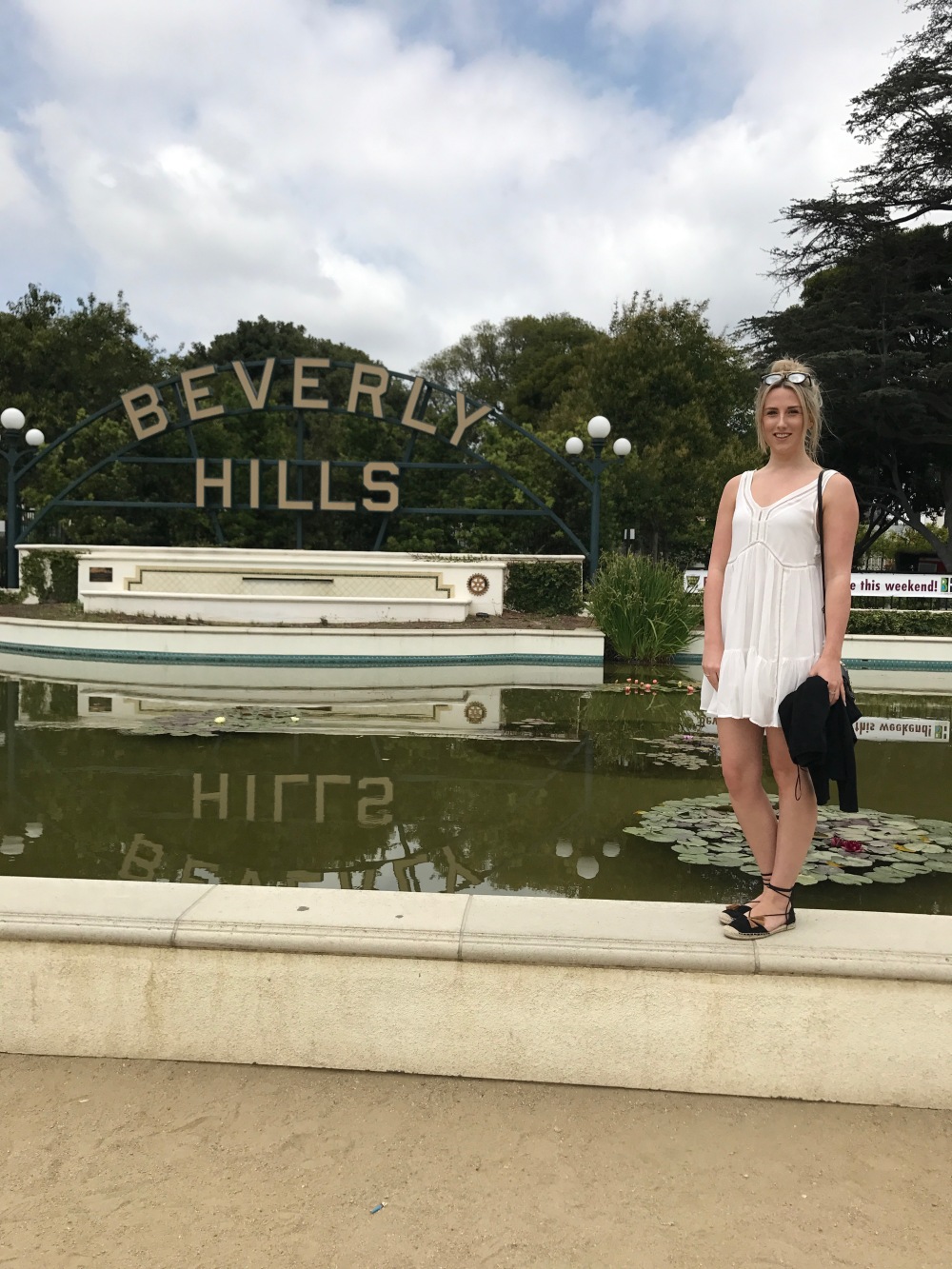 Behind the sign is the residential area of Beverley Hills, each different street is lined with a different row of trees to help differentiate to the residents. Another interesting fact we were told is that in between each row of houses is a secluded back alley where all the trash is kept as not to ruin the look and atmosphere of Beverley Hills when it’s trash collection day.

Walking away from the residential area and more into the city it was time to head to the incredibly famous Rodeo Drive. For anyone who doesn’t know, Rodeo Drive is a street of incredibly high end shops boasting names such as Gucci, Louis Vuitton and Harry Winston. If only I was a millionaire I could have shopped till I physically dropped, but instead I opted for a coffee and some breakfast whilst I people watched. A girl can dream though, hey? 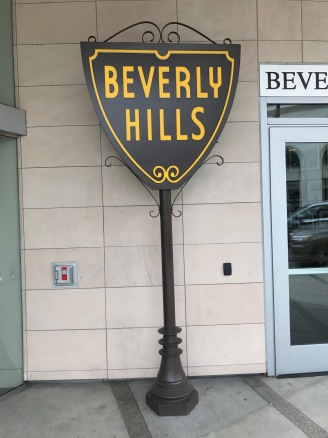 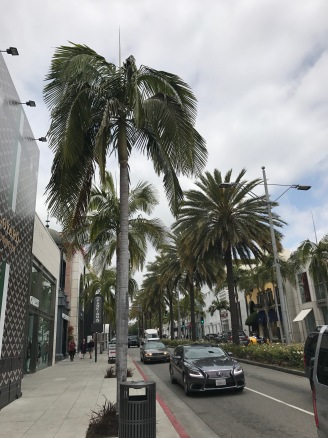 The area was beautiful and I could have spent all day just wandering around here and people watching, wondering what they do. Walking down I stumbled across the Beverley Wilshire Hotel where Pretty Woman was filmed. The hotel also offers a Pretty Woman package for just a small $100,000 to get the ultimate Beverley Hills Experience, pocket change right? That’s one great thing about LA, there’s so much stuff here recognisable from films/TV or just studios in general.

Heading back towards the bus stop it was time to move on to Hollywood! Driving past all the different film studios was cool as the audio told us which different shows were filmed at which different studios. Just before I went all the way to Hollywood though, I jumped off at The Farmers Market. The Farmers Market is an area of food stalls, sit down eateries, prepared food vendors, and produce markets in LA. It opened in July 1934 and is huge attraction for both locals and tourists. As I jumped off the bus, the clouds had finally moved away and the sun was shining and getting hot! 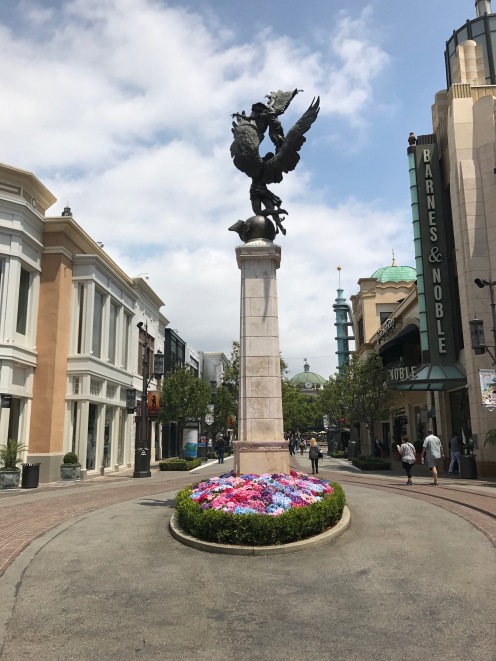 Wandering around the Farmers Market was such a quaint and beautiful little place, you really didn’t feel like you were in Los Angeles. I wanted to stop here for lunch at Ladurée for Avocado Toast but I wasn’t particularly hungry so after a wander around the shops, I jumped back on the bus to continue the journey up to Hollywood. 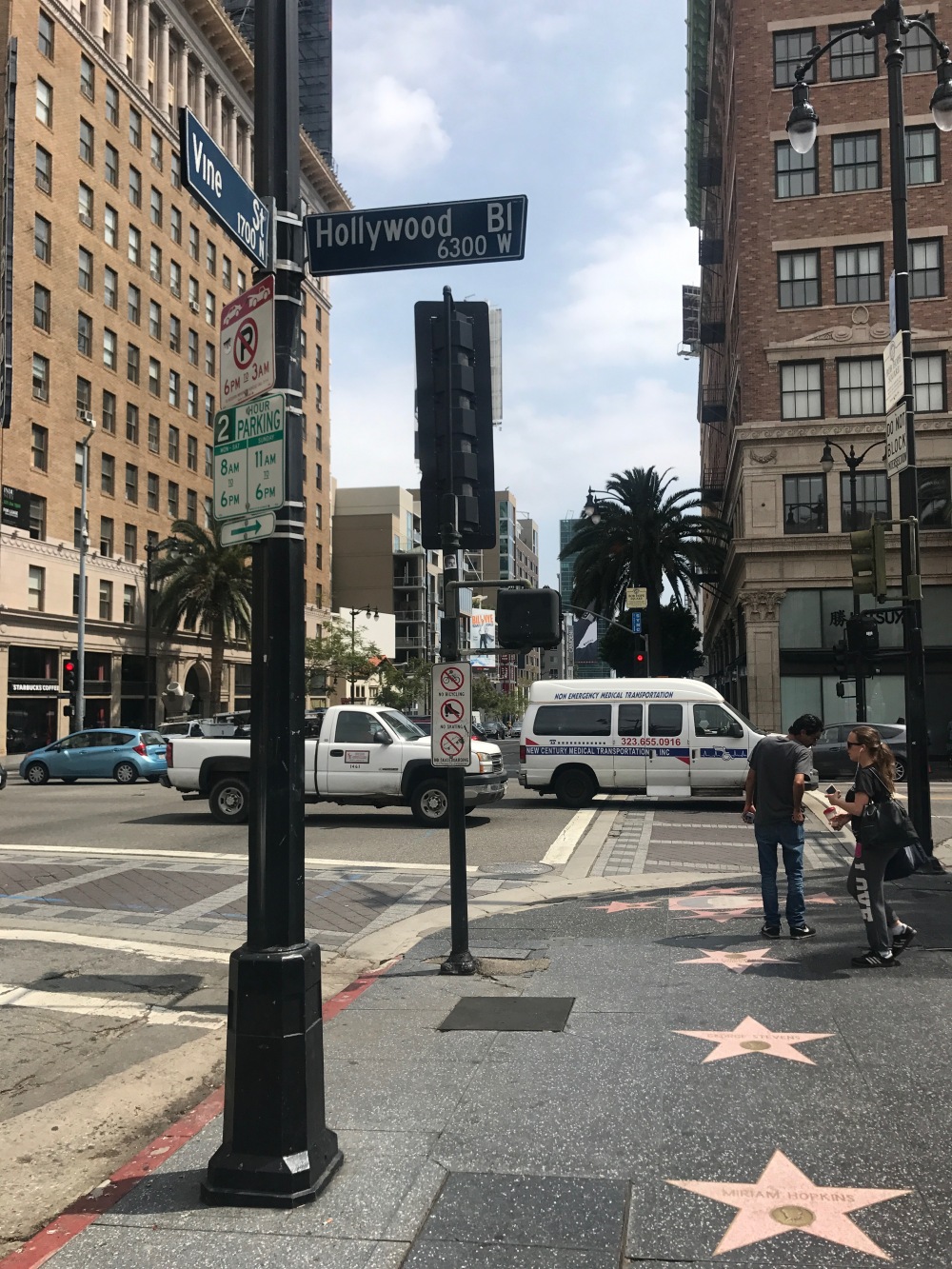 The Hollywood Walk Of Fame was a little underwhelming… it was honestly just the stars at the side of an incredibly average street. A recognised a few names, but a lot of them I had no clue walking down the sidewalk towards the Hollywood and Highland Mall for a better view of the Hollywood sign. I’ve travelled a lot of the world, but I have to say Hollywood was the one place I have never felt so uncomfortable to be a woman on my own. It kind of ruined the feel of Hollywood, somewhere I expected to be really glamorous and upmarket, when in reality was somewhere I couldn’t wait to get out of.

Inside the mall was the Dolby Theatre which is where the oscars are held! It was cool to be stood on the same steps that so many famous actors and actresses had also themselves stood on in their black tie attire!

What I thought was cool was along side the columns in the mall were all the years and the winners of Best Picture are placed, and they still have spaces for the up and coming years.

It was around 4pm now and I decided it was time to head back down to Santa Monica before heading over to Marina Del Ray on the last bus.

The sun was shining in Santa Monica now however I still didn’t head onto the pier as I wasn’t fancying riding on my own.

What I was though was hungry, and I decided on In-N-Out Burger as you can only get it in the west of the states. Googling the nearest one, I caught the last bus of the day over to Marina Del Ray and walked a mile up to the nearest one. At least I burnt my calories off, well maybe a 10th.

Now after 7pm, it was time to head back to my hotel and collapse into bed. An absolutely cracking day which I really enjoyed, LA is a great place but there is an incredible amount of homelessness and people sleeping rough on the streets and high rates of crime here which kind of tarnishes the glamorous persona surrounding Los Angeles. I wouldn’t be in a great rush to return here anytime soon, but would be happy to see it on my roster in the future and head down to San Diego instead!