Another new destination and country for me to visit, was Moscow in Russia! We left Dubai at 16:50 (nice to have a lie in before work) landing into Domodedovo Airport at 21:40. Making our way over to the hotel, we checked in and I grabbed some room service before heading to bed, except I think I’m experiencing a bit of jet lag as I was awake till around 5am, having to get up at 8:30am for the tour.

Meeting with our tour guide Masha (who is ex crew with Emirates) our first stop was to head over to the Red Square, the thing I’d been looking forward to most. It was a pretty chilly -3 so we warmed up in the car as best we could before heading out into the cold.

We wandered past the famous Russian Ballet Theatre and into the grounds of the Red Square. Before entering through the gates to the Red Square and in front of that was a large circle on the ground with a small dot in the centre, Masha explained that this was where the city of Moscow began and today is the largest city in Russia and also home to the most billionaires in the world. 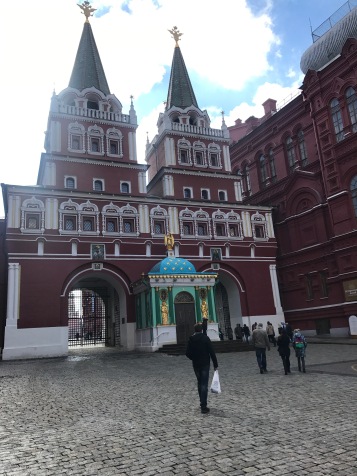 Wandering through the Red Square I finally caught a sight of the famous St Basil’s Cathedral, however to the side of the square was a very thick wall which was incredibly well guarded, and behind that stood a building. Masha informed us that that was where President Putin stayed and when the flag was flying, it meant he was inside (a bit like when the flag is flying at Buckingham Palace). 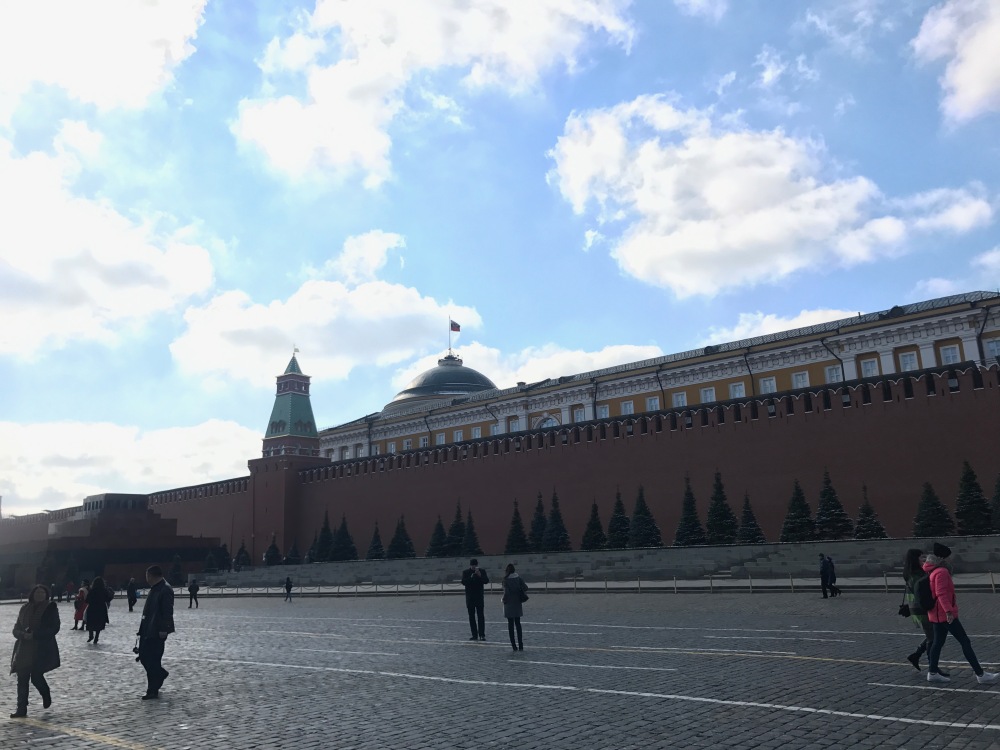 Even though we’d only been outside for around 20 minutes, we were really chilly so we headed into the nearby mall for a hot chocolate stop. It was an interesting hot chocolate though, it was more a chocolate soup it was so thick. I managed a few sips before it was far too sickly! 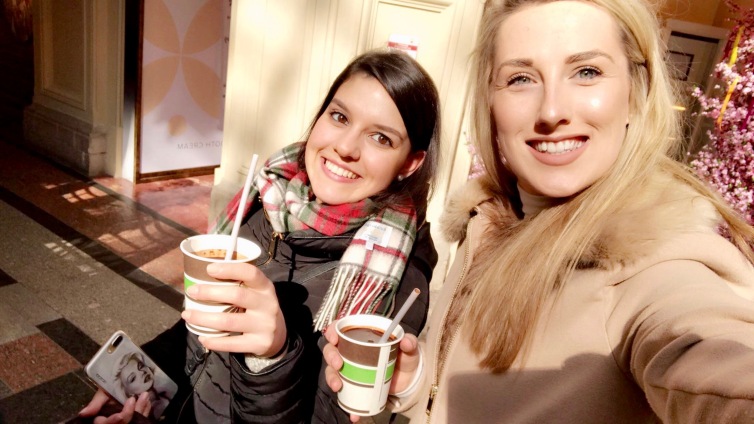 Moving on we took the metro over to a street (which I can’t actually remember the name of sorry) where there were different little souvenir shops and restaurants. The metro was insane, as in, if we didn’t have a tour guide we would not have had a clue. Nothing was in English, the underground was huge, and you could be walking 10-15 minutes to get to your platform. However, the metro was really pretty and very well decorated. There is a statue of a dog in the metro which is also meant to grant you a wish if you stroke its nose, which nearly every single person did as they got on and off the trains. So of course I made a quick wish!! 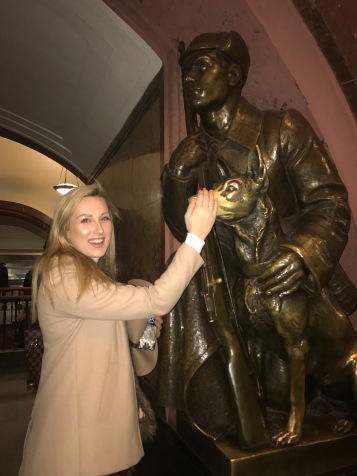 Masha had picked out a restaurant for lunch where they served local cuisine for us to try. The restaurant was kind of like fast food style, you chose what you wanted in front of you and paid before seating. It was great for being able to see the different local dishes, but it was quite busy and I felt pressured to chose quickly as Masha had to translate everything for us.

At the top of the tray I was given a small sweet which tasted AMAZING. They were fudge like type sweets made out of condensed milk and they were incredibly moreish, so of course I stocked up on some to take back to Dubai with me!

Next stop was the Cathedral Of Christ The Saviour by the Moskva River which was so so beautiful. There is so much colour in Moscow, many of the buildings are beautifully adorned with vibrant colours and golds, and this cathedral was no exception. 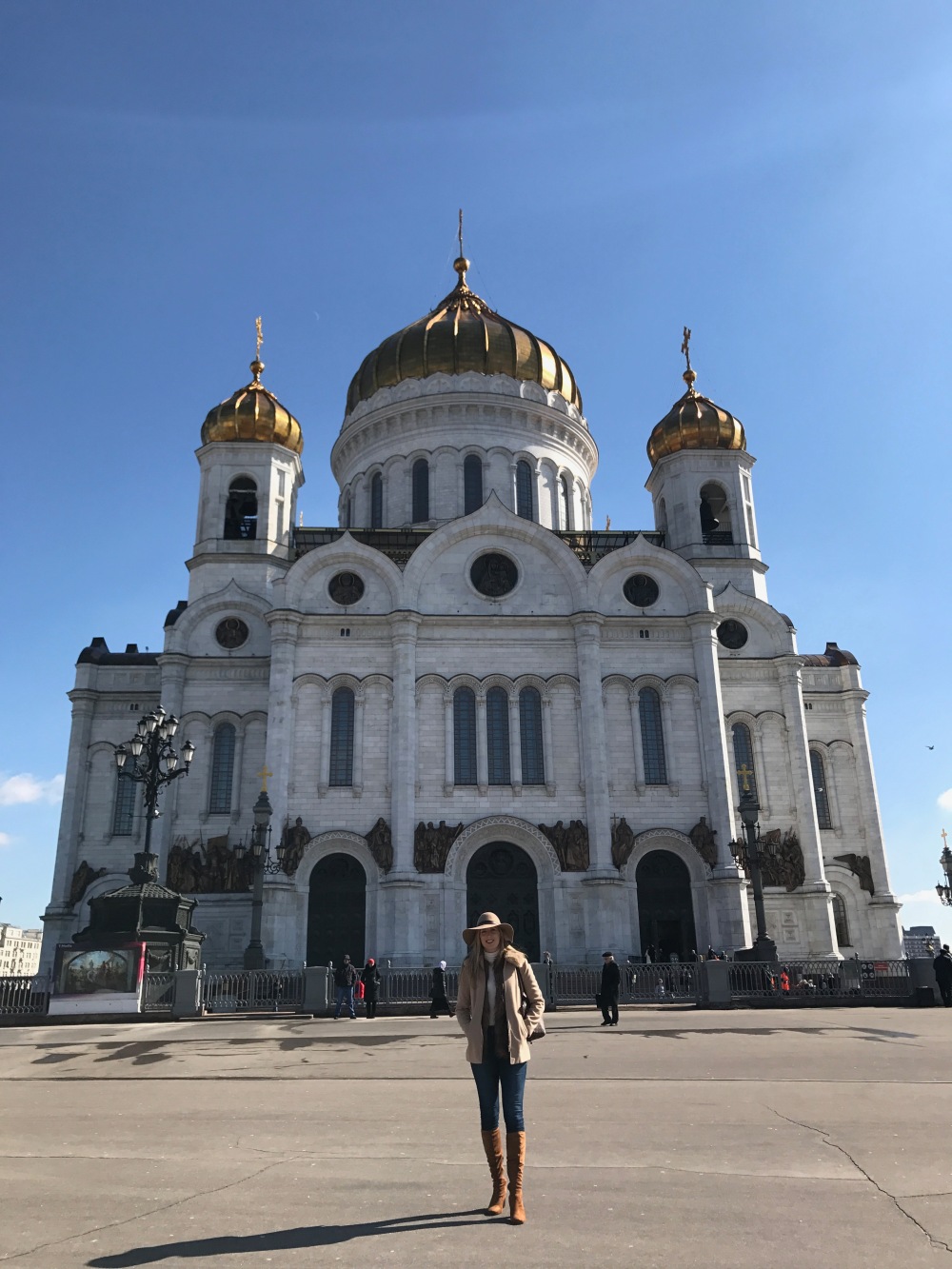 The inside of the cathedral was breath taking, beautifully hand painted everywhere. We all commented on how long this must have taken, and how on earth they painted the very high ceilings! Pictures weren’t allowed inside sadly, so you’re gonna have to visit Moscow if you want to see. 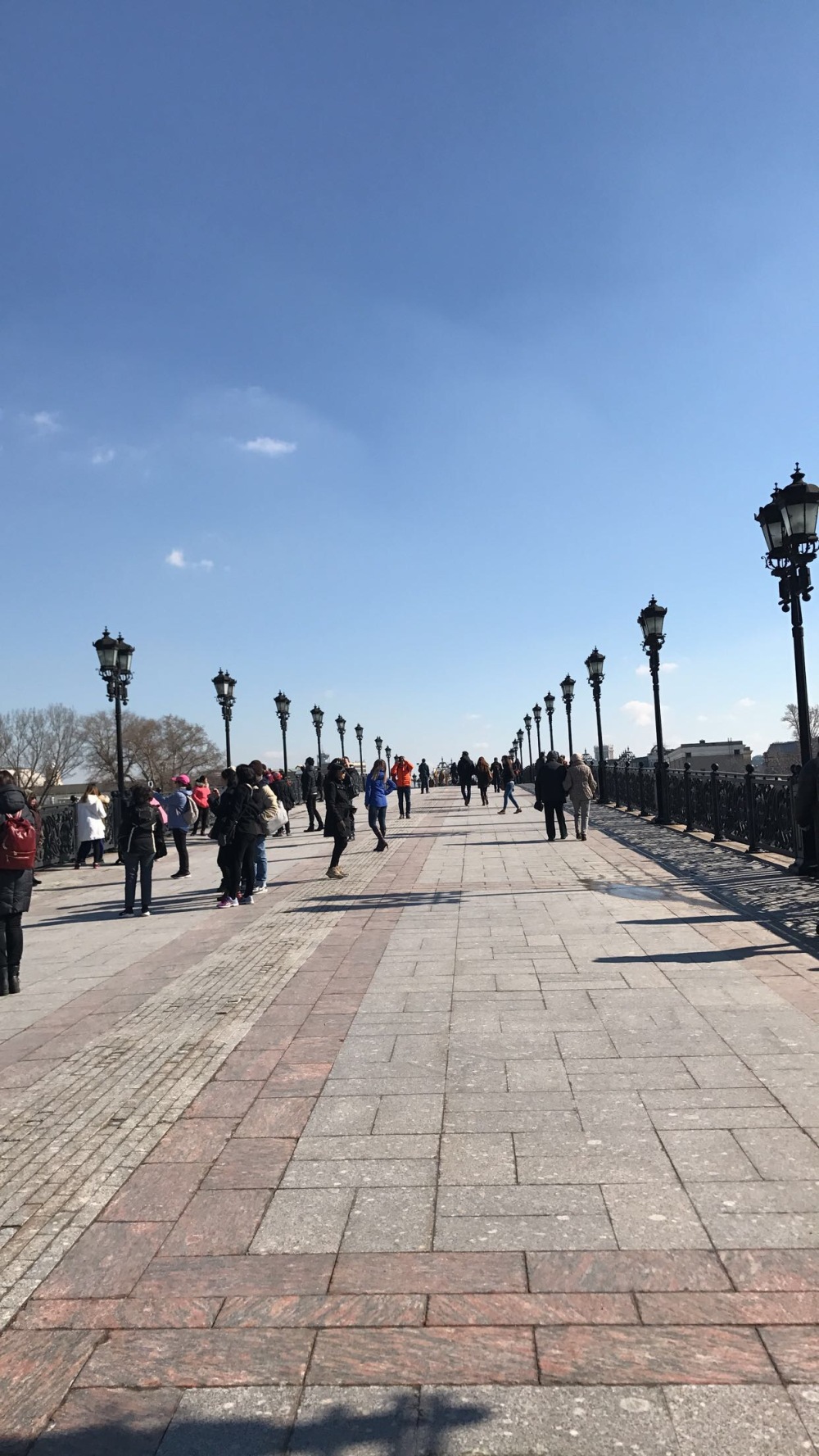 Walking away from the cathedral and over the river we were coming to the end of our day to get back to the hotel and sleep before the wake up call. I was struggling to keep my eyes open now after my minimal sleep the night before. We walked along side the river and up to a sweet shop to stock up on the condensed milk sweets and then drove back.

A lovely layover, and a great place to visit, but don’t think I would be in a rush back  anytime soon. I’m just super glad the sun was shining for us, makes a change for me doesn’t it?