I’ve been bidding for Phuket for a while, so was really happy when I finally saw this trip on my February Roster. The timings I thought were great, and I could see that the majority of the Economy Crew had not visited before. We departed Dubai at 11pm landing into Phuket International Airport 07:45am, and having slept for 14 hours the whole day before the flight, I was raring to explore Phuket when we got to the most beautiful hotel resort I have ever seen.

After checking in, we were taken on golf buggy’s to our rooms where I was greeted by a huge bedroom and bathroom and the most breath taking view over the beach. 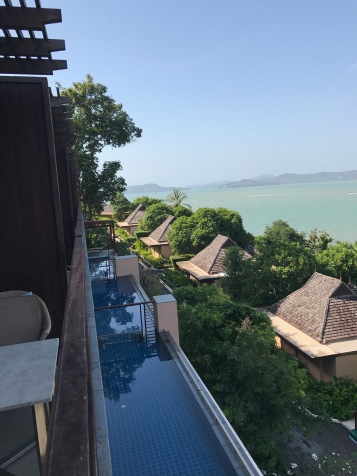 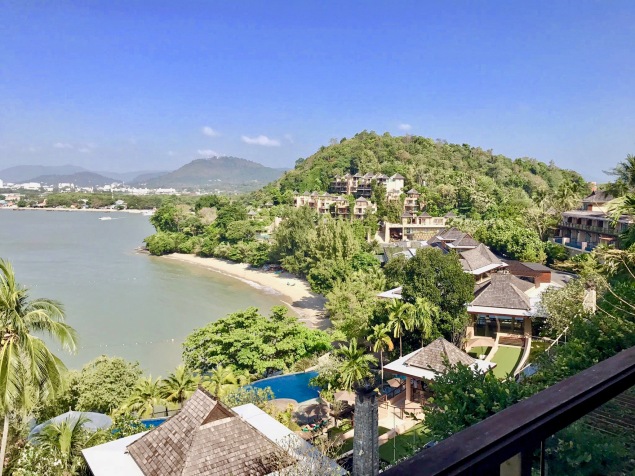 Myself and another girl Monique had arranged to do a half day island tour, so were meeting back in the lobby a couple of hours later. The tour we had planned would take us to a number of different islands, provide us with lunch and snacks and take us to the famous Maya Bay before getting back to the hotel for 7pm again. 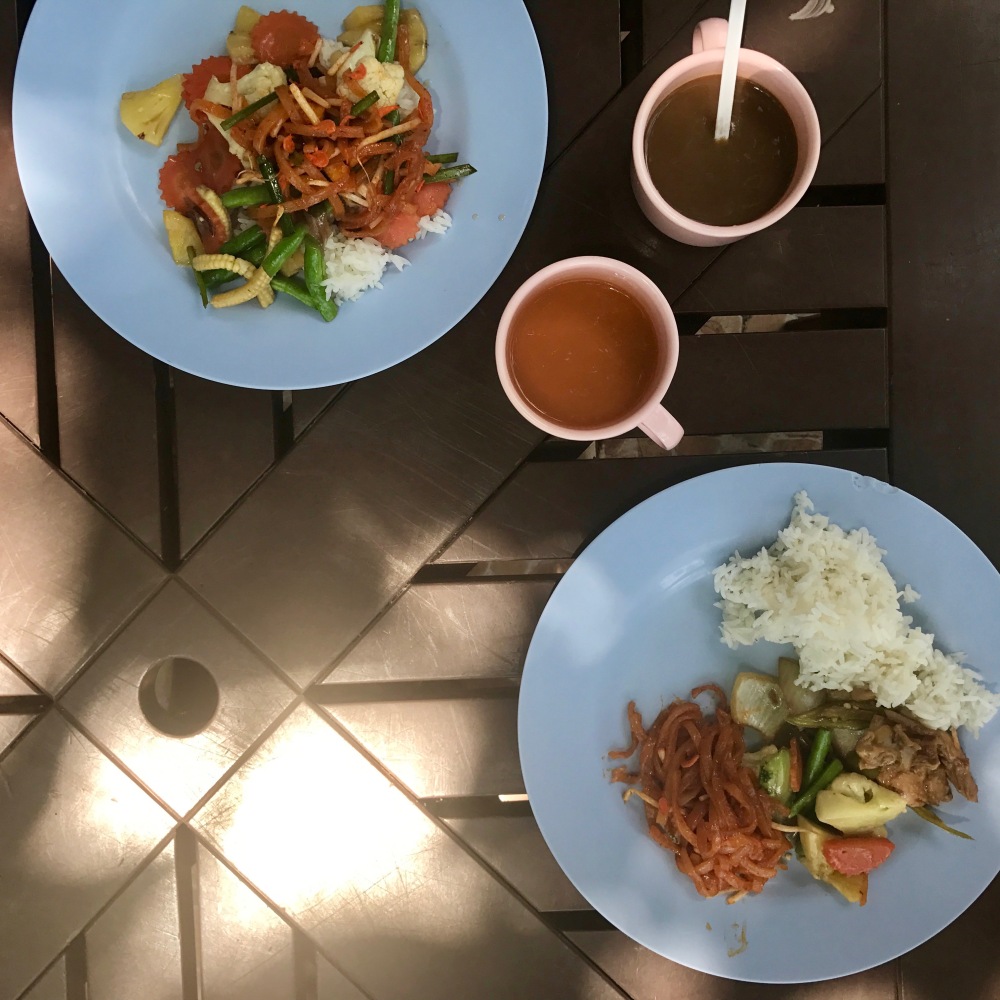 After an interesting lunch, we got onto the speed boat with the other guests. To get out into the waters we had to walk along a seriously long jetty which was made out of like small plastic blocks that were fixed together. But because of the waves, they jetty also rode up over the wave making quite an adventerous walk out to the boat. 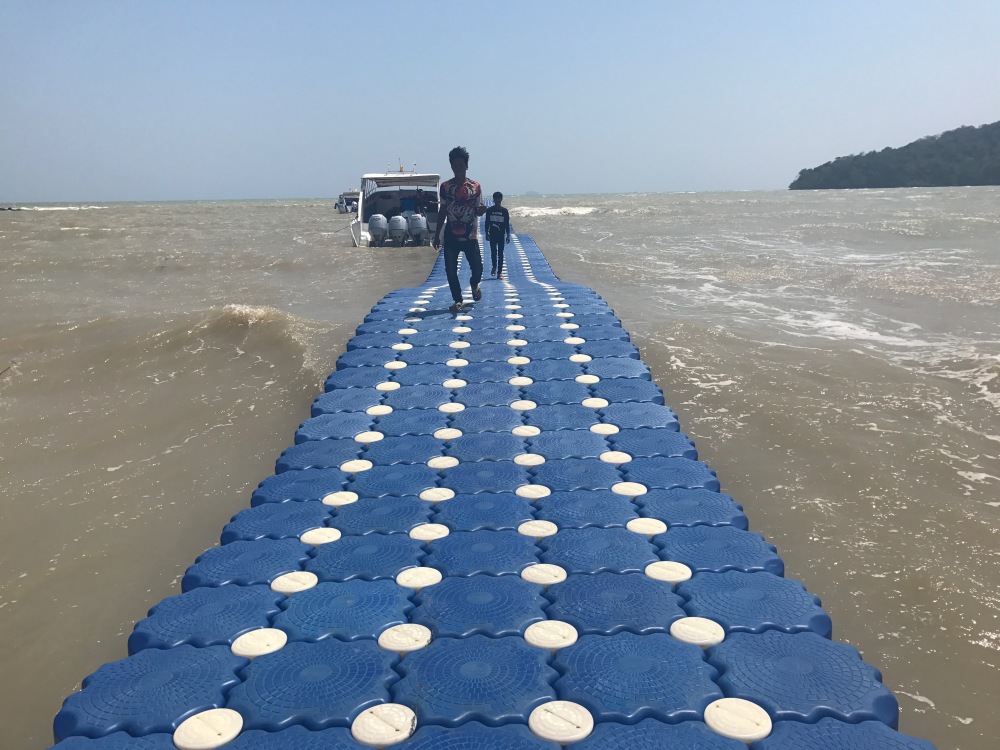 Our first stop was to Khai Nai Island where we were dropping some people off, pulling into the island I saw the most beautiful crystal clear waters ever. I have never seen it so blue in my life, I was totally mesmerised, the definition of paradise. Blue waters next to white sands, with a lush tropical green hilly backdrop all encompassed in a tiny island. People were jet skiing and kayaking, boats moored up the sandy shores and little wooden huts where people were eating lunch and drinking from fresh coconuts. I wanted nothing more than to get off and spend the entire day doing nothing here. But sadly, we pulled away before picking up others from another island just close by.

After our second stop off, it was then a 45 minute boat ride over to Maya Bay on Phi Phi Lei island. I can only describe this next 45 minute journey as absolute hell. The waves were so big, I experienced the worst motion sickness, and all I could think is when would this hell end? People all around me were throwing up, but I managed to hold it in by staring at the back of the drivers head the entire time. But, we finally arrived in Maya Bay and soon all thoughts of the horrific journey were in the back of my mind.

We spent just short of an hour on the beach before it was onto our next stop of the journey, snorkelling on the other side of the island. The tour guide was taking pictures, but was charging an extra 1200 baht the equivalent of £27, so I passed up on that, but we could see the most beautifully coloured fish I have ever seen swimming in and amongst the coral. I seriously need to invest in a GoPro so I could have shared this experience on here.

Due to the choppy waves, we were unable to visit Bamboo Island and on Monkey Island because of the waves, the monkeys were not low enough down the beach to be visible, so we made our way over to Phi Phi Don. If I’m honest, the only thing I was bothered about was getting back onto stable land… I’ve realised that journeys on water were not meant for me, especially after my trip to Durban too. 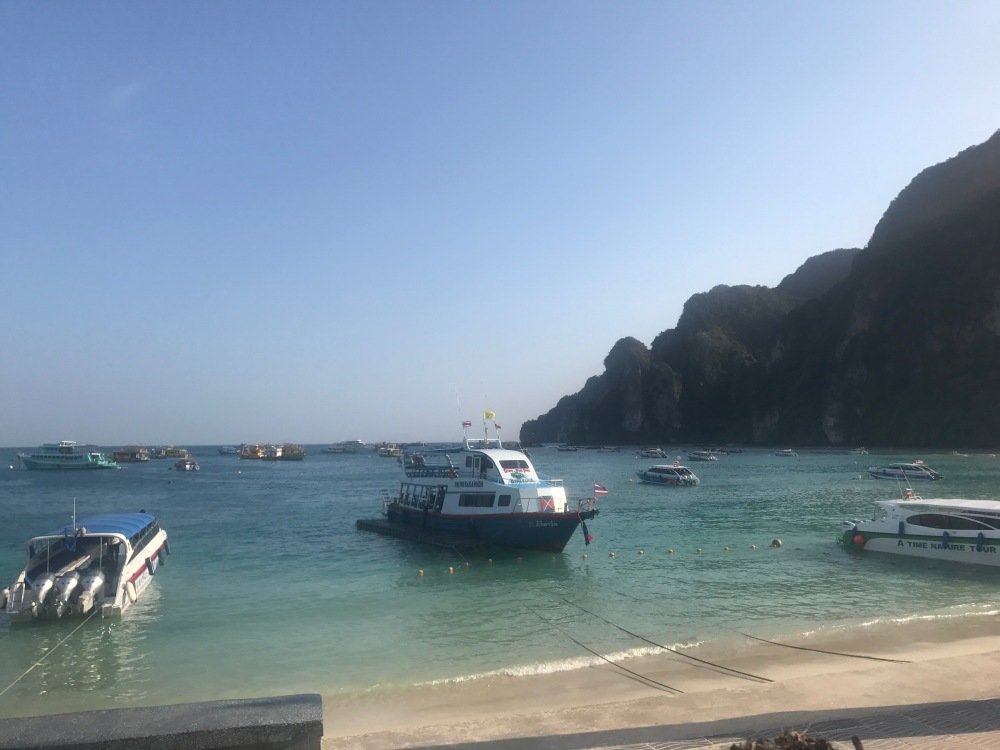 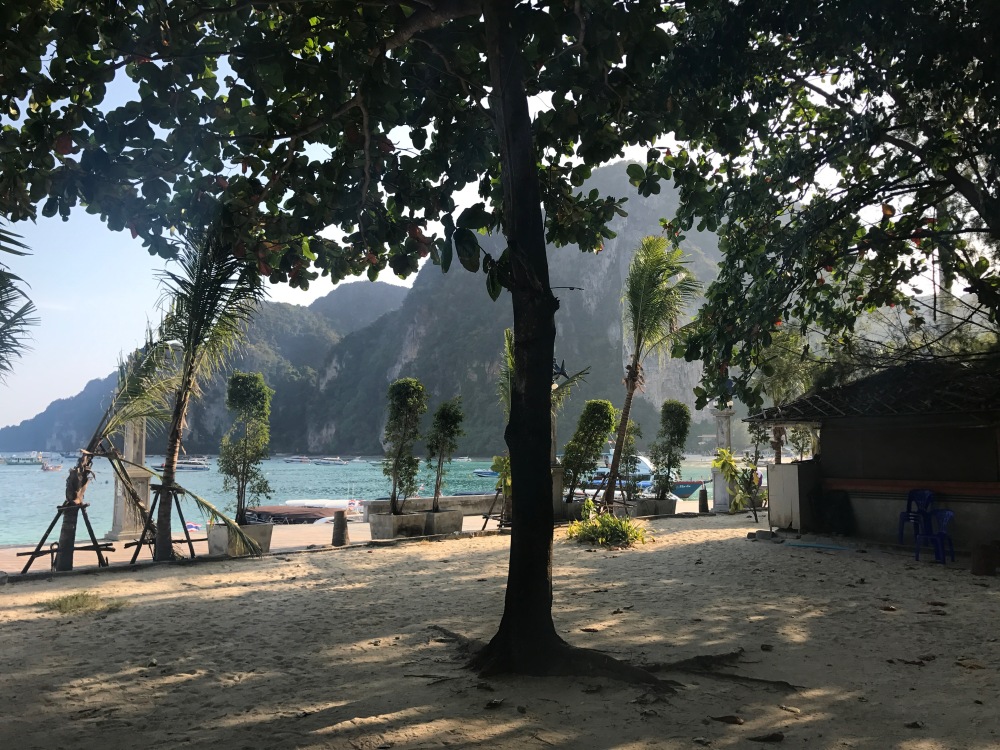 There were a number of shops and food places here which we were able to visit where I bought a few souvenirs and gifts, my Mum has been asking me for some more “funky pants” so I was able to pick some of those up for her too. And of course, I wouldn’t be in a tropical destination if I didn’t pick up a fresh coconut to drink out of!

Sadly, our day tour had come to an end and it was time to make the hellish journey back to safe still land. Both fortunately and unfortunately the heavens opened. A good timing because it didn’t taint our day in any way, but in addition to the waves which kept being thrown over the side of the boat, the rain was also lashing down making an already sickly journey, that little bit more cold and miserable. I wasn’t going to let that ruin my incredibly fabulous day though!

Getting back to the hotel, I was exhausted after our long day and being awake almost 24 hours, so I ordered some room service and dived into bed. I couldn’t come to Thailand and not order my absolute favourite mango sticky rice!!

The next morning it was up at 5:45 for the flight back to Dubai. I had such an amazing layover, it has most definitely snook up into my Top 10 Destinations, just check on the right of the page to see where I place it!