I managed to get 5 days off in a row to go and join my mum and dad on their ski trip, they have a place in Austria so I was hoping to fly into Munich and get the train over to Salzburg and meet them at the airport. However, with it being back to school for the majority of Europe, the loads were incredibly full and I only just managed to squeeze on a flight to Vienna in the evening rather than the morning by grabbing the last free seat – hallelujah!

Landing into Vienna International Airport at 8pm, I quickly went through immigration, grabbed my case and went to find the next quickest train to Salzburg. I managed to get a direct train however it took 3 and a half hours to get there! But it was an incredibly modern and clean train, and had free wifi so I was entertained the whole way over at least.

Arriving into Salzburg Hauptbahnhof I had to wait about 20 minutes for my Mum and Dad to arrive as they were seriously delayed due to the amount of snow that was coming down! After spending the past week in Dubai, Seychelles and Morocco in the sunshine, the -14 temperatures of Salzburg were seriously making me shiver. But finally they arrived and my Mum had me sat straight in the front with the heaters on, wrapped in a blanket ready to head back. What are mums for, eh?

Driving back, the snow was seriously beginning to fall, and the drive into the village where our place is requires driving right up one side of a steep hill and down the other.  Without snow tyres or a four wheel drive, we were starting to think we weren’t going to make it up… and thats when the car started moving from side to side before coming to a complete stop. The car had given up on us. So that was it, me and mum jumped out the car and began to push for a few minutes and the car began moving slowly but surely before it set off for good with shouts from me and my mum for my dad to keep going and we would catch him up at the top of the hill. Although, we had over estimated how close the top of the hill was and with not very practical snow shoes, an unlit windy mountain road and not very reflective clothing, we had to keep jumping into the mounds of snow at the side of the road every time a car drove past. After about 10 minutes of walking up this hill, a taxi finally stopped and gave us a lift to the top and we were finally able to be on our way once more and get to bed.

The next morning we woke up relatively early, had some breakfast and had decided to stay in the village of Rauris for a day of skiing. As all my ski stuff was down in the basement, I had to walk through the complex like this… maybe a new look for 2017 we reckon? 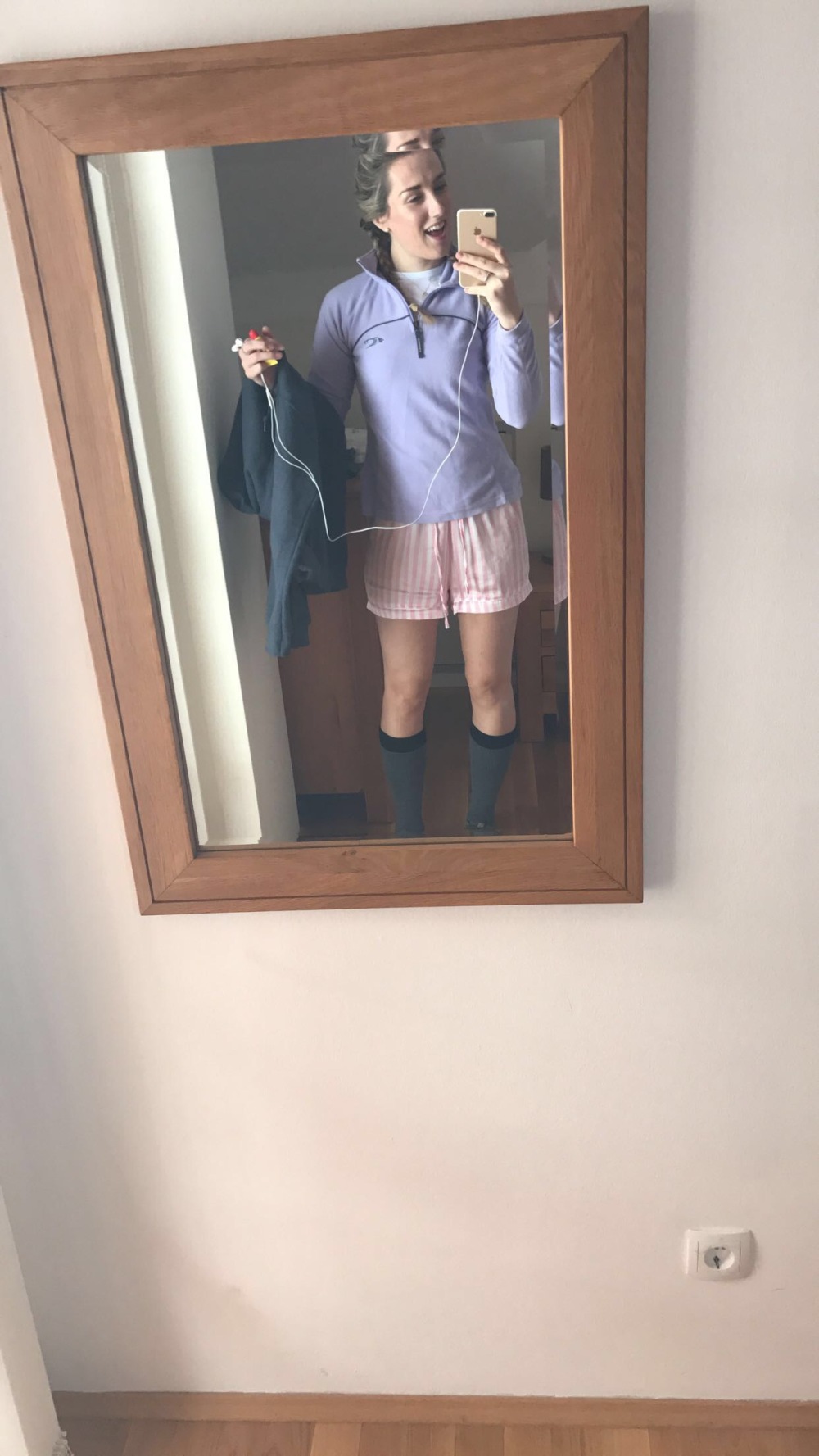 Since I had last been, they had extended the resort with a new lift and a long new run so we were looking forward to getting up there to try it out.

With our boots and skiis on, we made our way over to the chairlift at the bottom of the resort to get to the top! For the past 10/11 years I’ve actually snow bladed. Snow blades are smaller versions of skiis which are more rounded at either end, much better for going off piste and doing tricks as you also don’t have poles. A down side is that as they are shorter, they go slower, so if you hit a long flat bit theres a lot of pushing with your legs which can get very tiring. But as my sister wasn’t joining us I decided to try out her skiis once more to get myself back into the swing of it, so I was hoping that I wasn’t going to be like a new born giraffe on the snow! 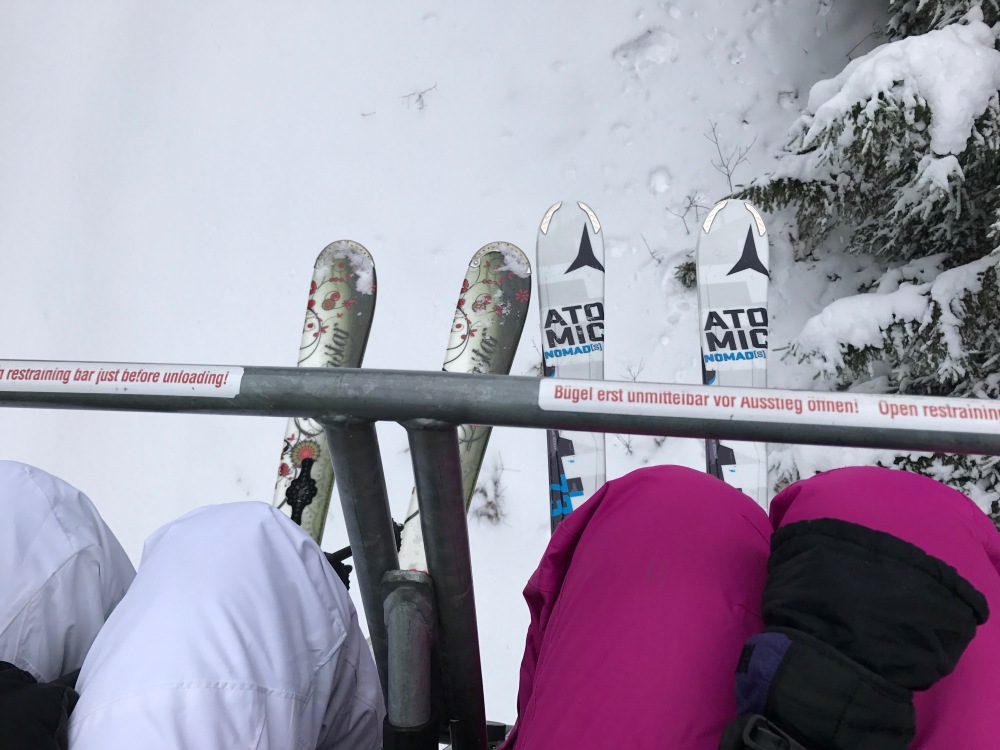 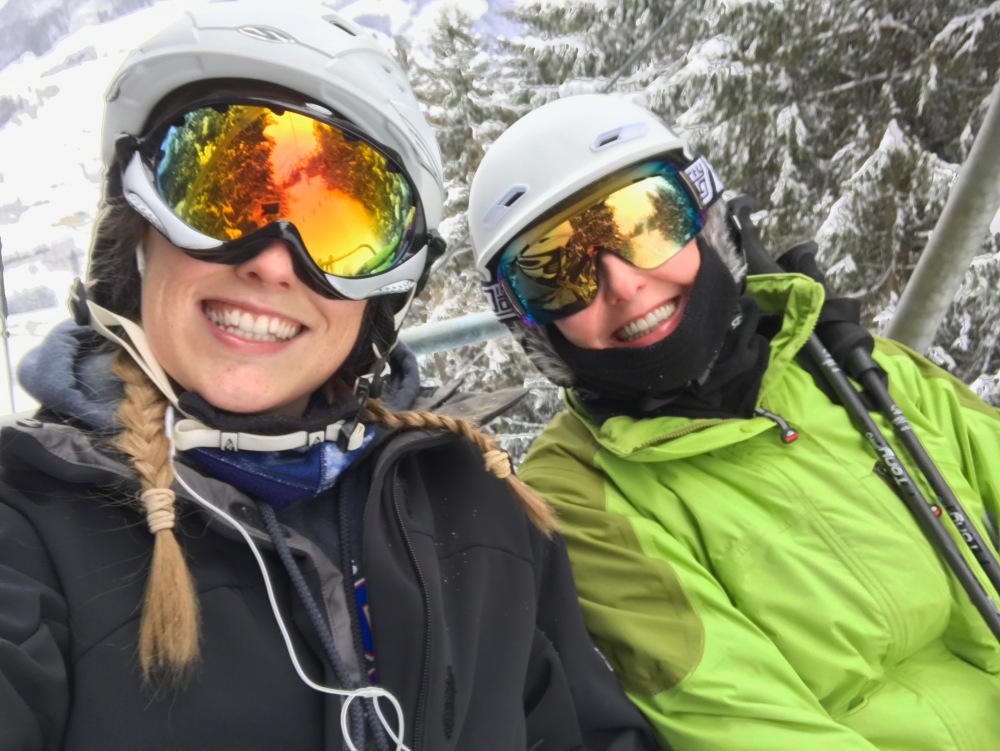 Making our way up to the top, for the first 30 seconds I seemed a bit on edge on my skis, but after that it was like I’d never been away and I was flying down the slopes as usual. We also managed to see the cable car that all the owners of the complex had sponsored, I managed to take a little snap as number 10 went past!

After a fair few laps it was time to stop for lunch and I had worked up an appetite for my favourite goulash soup – which you may have seen in some of my previous blog posts – washed down with my other Austrian favourite glühwein. And of course we had space for a dumpling, it was our first of the holiday and all!!

It was back to the slopes for an hour or so longer before we commenced onto the best part of skiing – aprés ski! 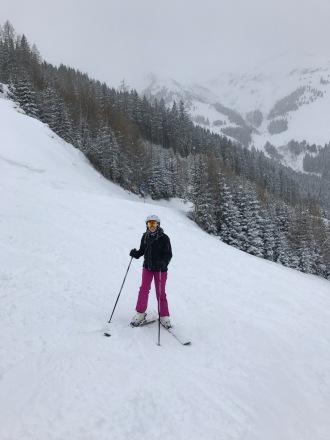 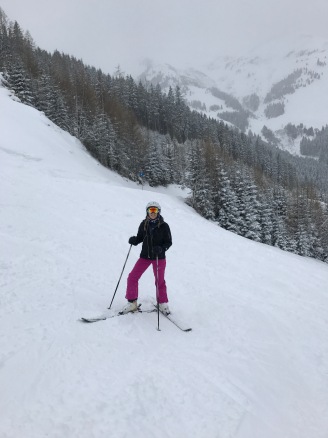 That evening we were meant to go out to dinner but me and my dad were so tired from our long first day of skiing that we fell asleep on the sofa for three hours and missed our chance at going out for something to eat! Ah well, theres always the next day.

The next morning we had agreed on going to Dienten a favourite resort of ours just short 30 minute drive away from our place. The drive over was so beautiful, what is it about snow that makes trees just look so pretty?

Right at the top of the mountain was two large seats with a great view of the mountains behind, it was too good a photo opportunity to pass up on to ski right past! 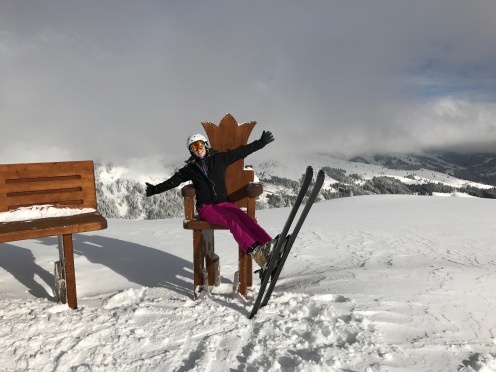 After another long morning on the slopes, it was time for a well deserved lunch. That’s the thing I love about skiing, you really feel you deserve your food after working up an appetite, so there’s no worries about the serious amount of calories consumed that day, as you need them for energy anyway! 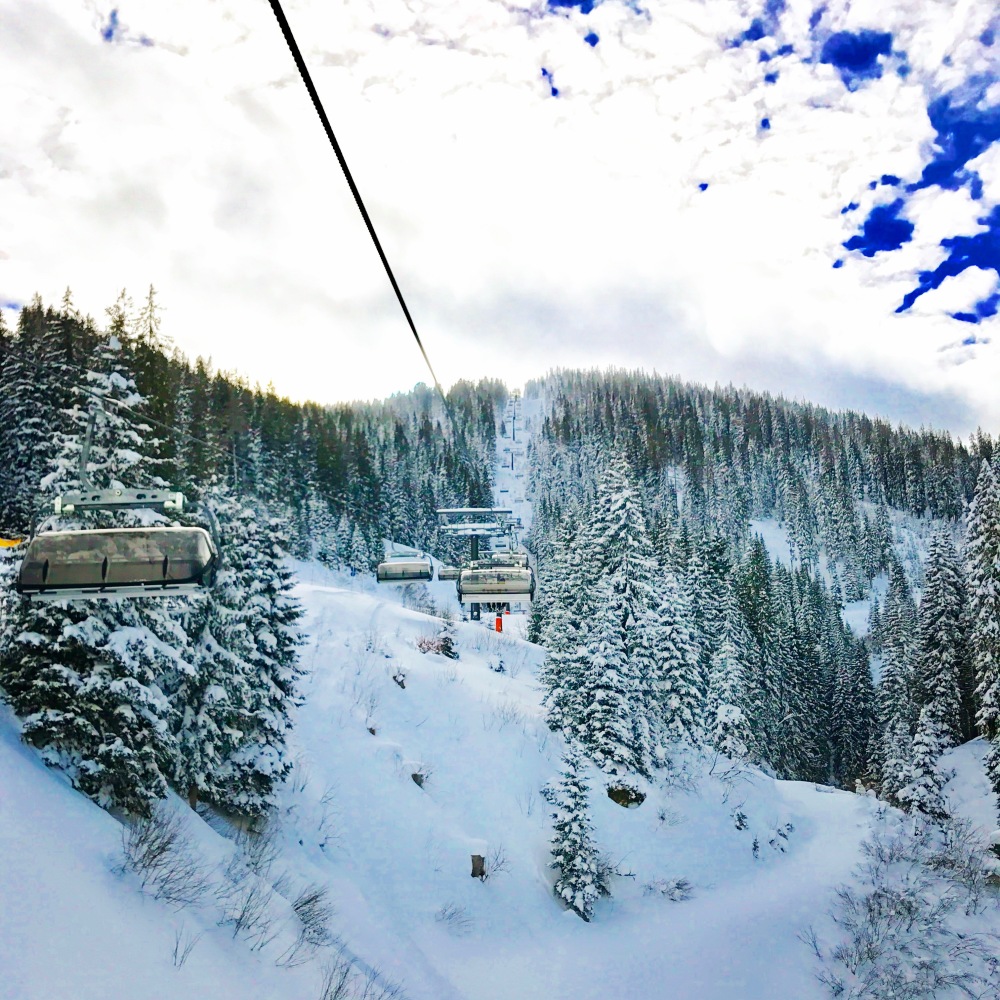 After a long day up the mountain it was time to drive back – and actually go out for dinner that evening – I’d decided to do a time lapse of the drive back, but I didn’t realise how fast it would actually go. I’ve tried to slow it down as best I could here so you could see but it still doesn’t look brilliant. If anyone on here knows how to work wonders with it, please do let me know!

I hope that gives you an idea of how gorgeous the scenery  is as we drive between different ski resorts! That evening, I managed a cheeky hour power nap in front of the UK TV (thats the best thing about having your own place, you can totally chill out) before I got up and got ready to go out for dinner with my Mum and Dad. 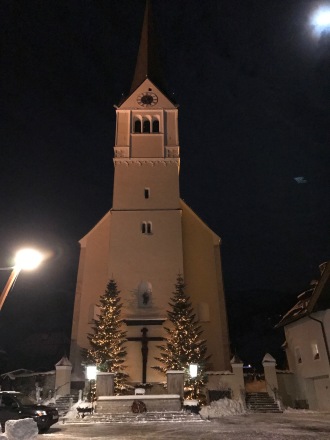 There was a new argentinian steak restaurant just opened in the village, so after calling at a bar for a drink (baileys hot chocolate for me please!) we ended up there. I was seriously feeling the cold after our brisk walk and I couldn’t manage to take my coat off, after ordering a mulled wine to begin with, the waiter asked if I was cold, he shortly followed with a schnapps which he said would warm me up, and boy it did, I was heated from the core!

After a lovely meal feeling incredibly full after that feast, we walked back with a group decision to head to Dorfgastein the next morning.

A much colder morning as you can tell as I’m completely wrapped up, stopping for a quick picture but keen to keep moving. We had a lovely clear morning of skiing before we stopped for a leaisurely lunch.

On our final chairlift before our lunch stop, I noticed the tiniest little chapel just off the side of the piste which I wanted to ski up to before we stopped for our lunch! How cute? And it was right at the top of the mountain. 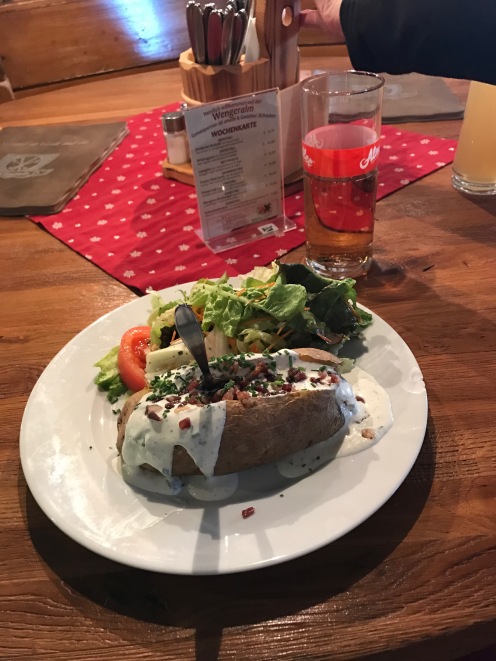 As it was my last full day of skiing, we thought we would try and pack in a few more good runs in before we made our way back, although, my skis had decided against that though as I had the most spectacular show stopping head first fall down the mountain as my skis just clipped a block of ice. So with that, we were ready to go back down and call it day.

That evening, we had arranged with some friends who also had a place in the complex to meet up for a few drinks that evening for a bit of aprés ski and a catch up, before having a few light nibbles in the apartment. We didn’t want a late night as we wanted to be up early to catch a half day of skiing before I had to make my way back to Munich Airport to fly back to Dubai.

All plans were soon halted however, when we all came down with food poisoning in the early hours of Thursday morning. Bed bound, I wasn’t able to fly back to Dubai and had to call in sick, which has resulted in me missing my next duty to London Gatwick. Which I had SO been looking forward to catching up with all my friends! So with all of us bed bound for the next day, that put an abrupt and a bit of a disappointing end to the holiday sadly… But I still had a fabulous trip! And thanks so much for having me Mum and Dad, hope you enjoyed the last few days of your holiday too! 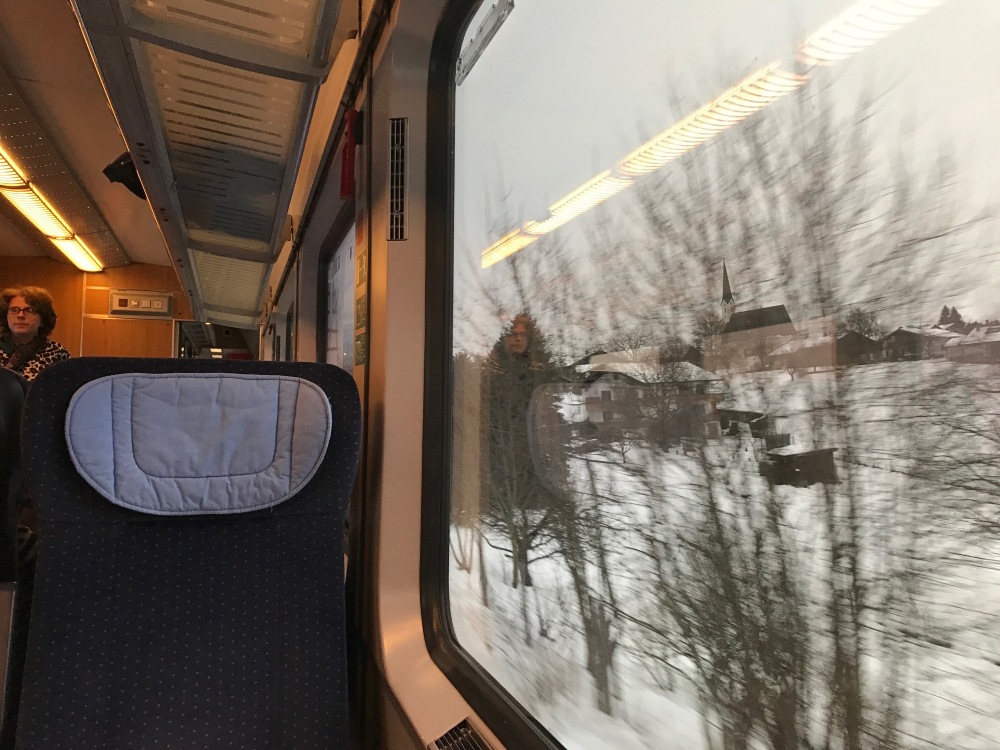 So my next layover isn’t for a few more days! I have a turn around to India before I’m off next, so stay tuned for my next post.