HAPPY NEW YEAR! How on earth is it 2017 already?? My final flight of 2016 was to Mahé in the Seychelles! A flight I had bid for and was very happy when I saw that’s where I would be bringing in the New Year. I woke up New Years Eve at 5:45am to start getting ready for work, I showered, did my hair and make up and put on my uniform for the last time of 2016. Just before I left, I saw out of our balcony the craziest, thickest fog! So I double checked my departure time to see if there was a delay, but there was no update so I went to take the bus. Just as I got on the bus, another girl asked me if my departure time had changed because of the weather, so I double checked again to see that it had been pushed back 2 hours! As I was on my way to headquarters, there wasn’t much I could do so I grabbed some breakfast and then went to the crew lounge to try and get some sleep before my eGate again. After a 90 minute nap, I went through my eGate, we did our pre flight briefing and made our way over to the flight, however we were delayed further due to low visibility again, so our already short 16 hour layover, was now down to 13 hours, and I was beginning to panic that I wouldn’t get a chance to see the Seychelles in the sunlight at all!

The flight over was really nice, super easy going passengers and a lighter load so the 4 hours over to Seychelles went really quickly. It was also my first time flying on the B777-200 which made a nice change! A smaller plane, with less crew, doors and passengers, so it was great to actually experience a plane I’ve learnt all about before they are discontinued with Emirates. Landing at 5pm, rather than 2pm we disembarked our passengers, did our post landing duties as quickly as possible as to not eat into our layover time anymore and made our way through the small airport and out of arrivals. However, when getting to our pick up point, we had to wait a further 30 minutes for a bus to arrive and all dreams of drinking a coconut in my new bikini on the beach whilst soaking up the Seychellois sunshine were diminishing, especially as when we got on the bus, the heavens opened and down the came the rain. Bucket load, by bucket load. What is it with me and exotic destinations, and lots of rain?

The drive over to the hotel took 45 minutes, and we entered the most beautiful resort. We had arranged to meet an hour later for a New Years Eve dinner at the hotel buffet, but I was determined (as the rain had now stopped) to get onto the beach in my bikini as I had been waiting all month for this. After being taken to my room, I changed as fast as I could and ran down to the beach to take in the view and hopefully take a little dip in the warm waters. 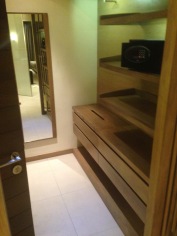 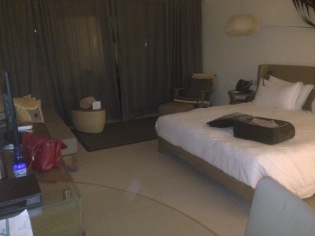 But obviously this was not Mother Natures plan for me as it began to rain again, so much so that it looked like I had been swimming in the ocean. So I made my way back to my room to change before going to dinner, not before getting lost around three times as I wasn’t paying attention as I sprinted towards the beach.

After I changed, it was complete darkness now so I couldn’t actually see much of the resort. Many of the crew had explained how good the buffet at the hotel was and that it did great seafood, so I was excited to see everything that they had on offer, and boy they didn’t disappoint! 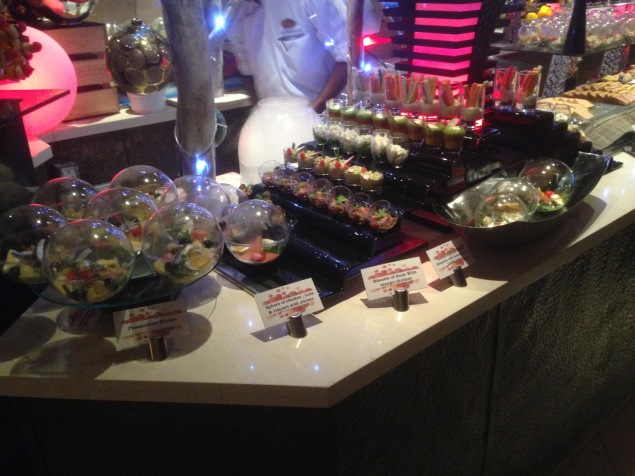 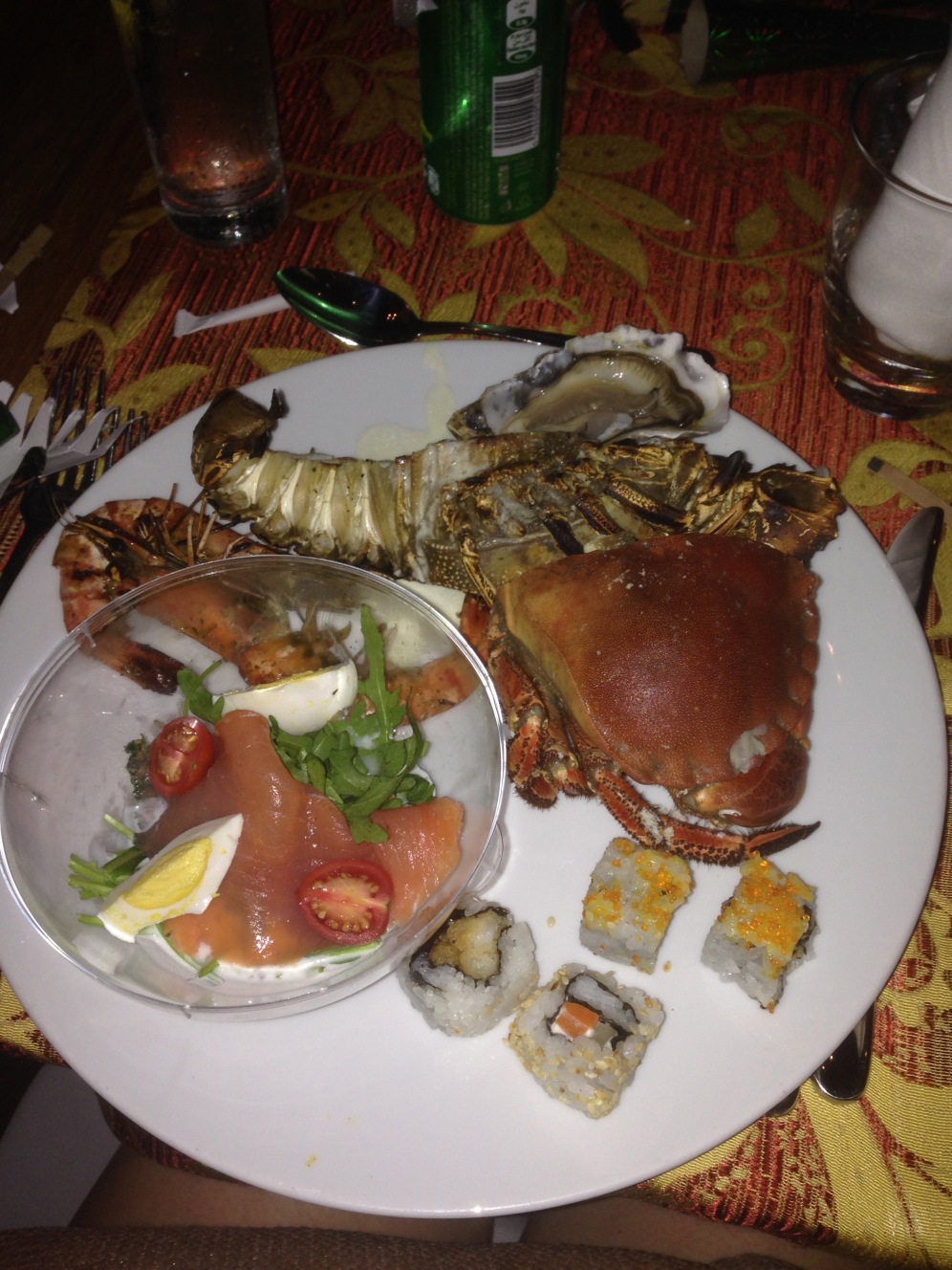 Around 10pm, we were all becoming rather tired and the party didn’t seem to be getting going. As no body was keen to stay up and celebrate the new year, I headed back to my room and before we knew it I was fast asleep and woke up at 5am for the wake up call… what an exciting new years eve. 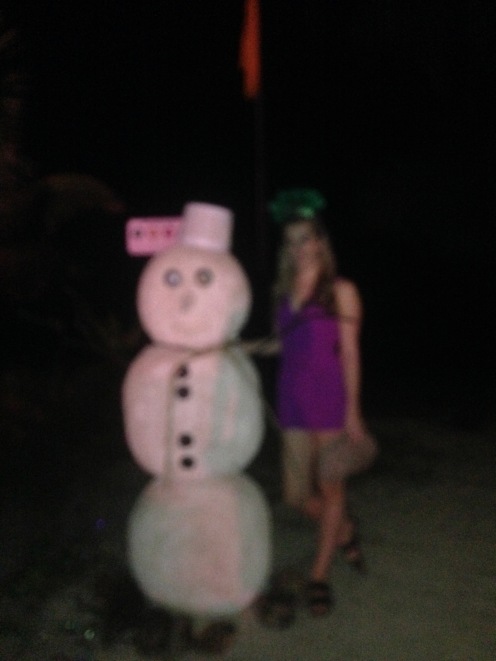 I was hoping the sun would be up for one more photo opportunity, but no such luck, so I got changed and took the buggy back to the lobby to check out and make my way back to Dubai. A bit of a disappointing layover, but this is crew life and its completely unexpected and things like delays do happen! The Seychelles was absolutely stunning, much prettier than Bali and I will definitely be bidding for this in February so I can check out more of the island. The lush green back drop with brown stony rock against the unbelievably turquoise sea was breath taking! I honestly have never seen a sea that blue, it was unreal. I wish I was able to take more pictures, however my phone was stolen over Christmas (on my birthday of all days) so I had a poor quality phone which ran out of battery very quickly, so I apologise on that front as well! A new phone has been purchased now though.

My next flight is to Casablanca in Morocco, so stay tuned for what I get up to there! As always, feel free to follow me on Twitter and Instagram for more daily updates:
http://www.twitter.com/Jessicaaahhh
http://www.instagram.com/Jessicaaahhh