So, if you hadn’t guessed, I was pulled out from my 9pm – 5am home standby for 24 hours in New York! Not the 50 hour layover, but I can cope with such a fabulous destination for my reserve month. Crew control actually rang me late and said can you be at work in 90 minutes when I was currently laid on the sofa in my pyjamas and watching a Christmas film and not at all packed. I still achieved it though! 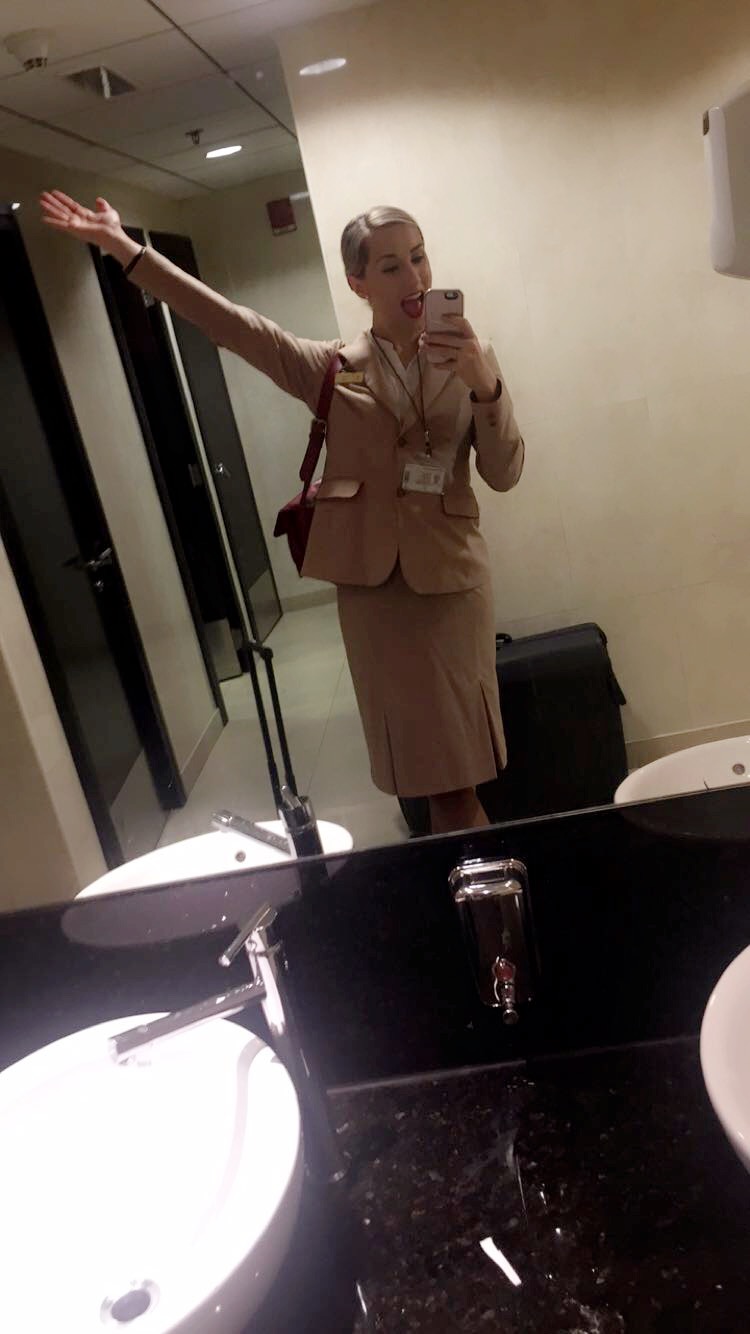 We departed Dubai at 3am and the 13 hour and 10 minute flight had us landing into JFK at 9am. By the time we had gotten through immigration and driven through the morning traffic into New York it was 11:50am. No time for a nap even though I’d only slept for 90 minutes in crew rest in the space of 32 hours, I powered on through as I had to go out and explore New York. I’ve been to New York before on holiday with my family so I had done the majority of touristy things in the city. However, there is so much to do in NYC and I knew if I had a nap now I would NEVER get up. So I showered, changed after realising I had forgotten to pack half of my things in such a rush and went to grab a coffee and explore.

I didn’t get chance to visit Brooklyn Bridge when I was last here due to bad weather, so I had decided to head down in that direction. Packing quickly I had just assumed it would be cold weather like two years ago (I also forgot my hair straighteners hence why my hair is in french plaits) except it was the most gorgeous day so there was no need for a jacket and I probably could have gone without tights too!

I managed to get on the subway in the completely wrong direction, the New York subway system is so complex and baffling. The tube is much simpler – way to go UK – so I had a lovely lady help me in the direction that I needed to be going. Headed towards City Hall, I exited the subway and made my way in the glorious sunshine to Brooklyn Bridge and my what an amazing bridge! There was so many people wandering over it and it looks spectacular as you walk over it, to turn around and look at the skyline of the big apple. Absolutely amazing, how can anyone not love New York? 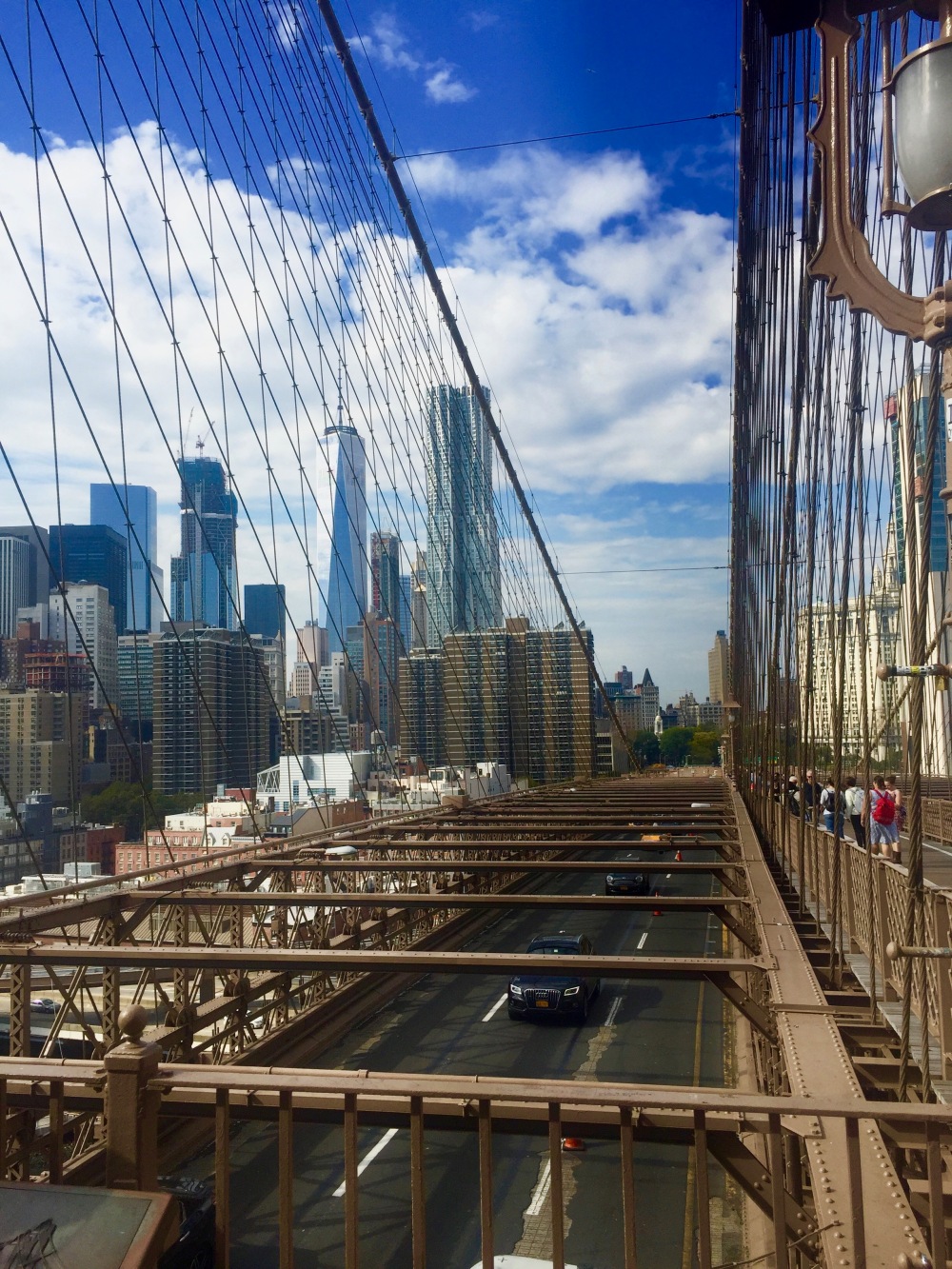 I walked right the way over to the other side and decided to try and find a subway over in Brooklyn Heights. I ended up walking right down to the river front where there was the most beautiful cafe which I’d love to try, but as I wasn’t hungry and was on my own I passed up on stopping.

After a lot of wandering around trying to find a subway station (why are subways so much harder to find than tubes?) an elderly man could see I was looking lost and pointed me in the right direction. I wanted to go over to the apartment block that they used for the show Friends but was unsure the best way of getting there. I asked the ticketing officer of directions and she was without a doubt the rudest woman I have ever come across in my life and actually shouted at me for not knowing where I was going. Great customer service inside the subway! Having a vague memory of my sister saying its in the Greenwich Village I hopped on in that direction. Looking at the map I’d grabbed from the hotel I saw that was where NYU was as well which I thought would be cool to see and pretend that I’m Blair Waldorf from Gossip Girl.

But with no internet and limited directions it took me so long to find the apartment block that I gave up on NYU and being Blair and took the subway back up to Times Square. I’ve visited Times Square before but thought I could do a bit of shopping, grab some food and maybe look at prices for a last minute ticket to a show that evening. I’d seen billboards around for School of Rock the musical which was really catching my eye, I didn’t even realise they’d made it into a musical! 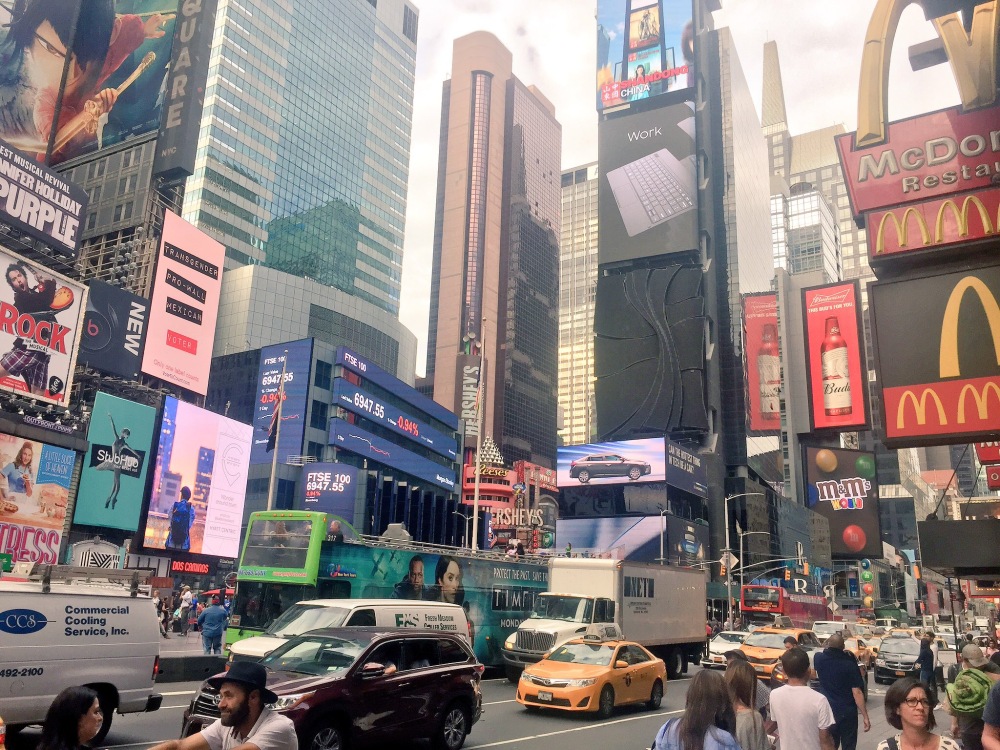 The ticket line for the discounted seats was so long that I couldn’t be bothered to stand in it, so I looked for somewhere that I could eat and also charge my phone as it was running out of battery and my portable charger was also dead. I couldn’t seem to find anywhere when a doorman informed me that there was random charging points around the city where you can plug in your phone for fast charging and also connect to wifi for free – such a brilliant idea I thought, especially for a city like New York! 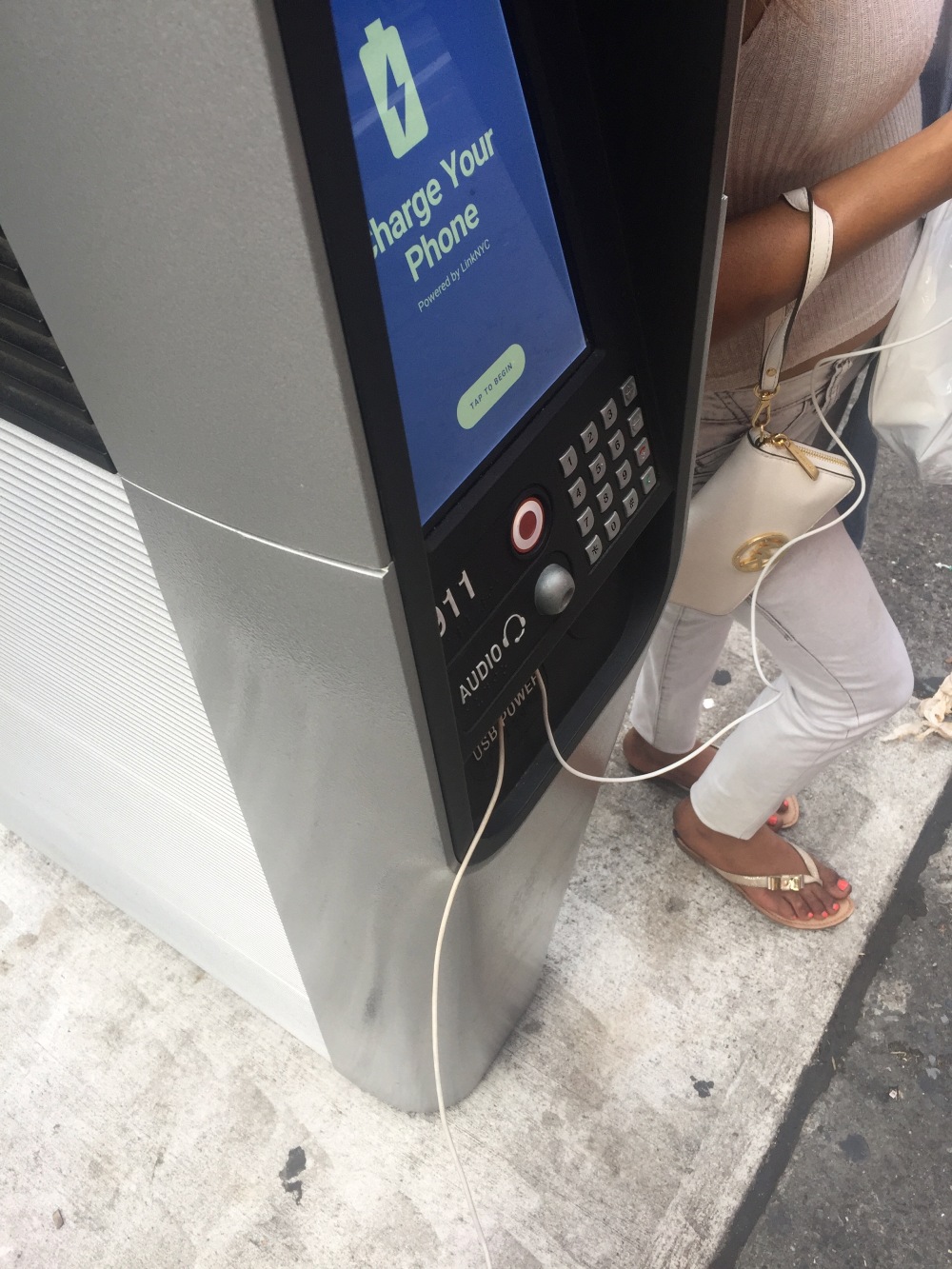 I was beginning to feel extremely tired now after being awake for such a long time and also due to the time difference from Dubai (New York is 8 hours behind Dubai currently) so I grabbed a few of my favourite American drug store products, a soup and a sandwich from Pret A Manger and took it back to the hotel to eat in bed whilst I skyped my Dad. 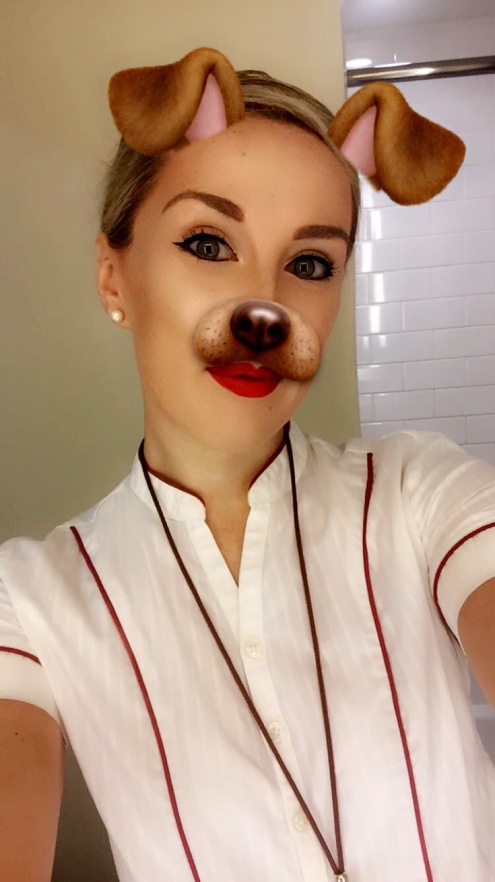 I woke up after a lovely 13 hour sleep (definitely needed especially for the long flight back) and didn’t think about the after math of not only wearing my hair in french plaits but also sleeping in them… I forgot to get a pic without the snapchat filter though so sorry about the dog ears and nose haha!

All in all, a wonderful trip and it was so nice to be back in the USA again as it’s been almost two years since I was last there when I was studying abroad at the University of Kansas. I’m hoping that this will kick start the ball rolling for me visiting the rest of the Emirates American destinations now! Also exciting news, Emirates have just announced that they will be flying to Miami as of December! Fingers crossed to see that on my roster some time soon!

I’ve had a few days off after my New York flight, and on Monday I am on 3am – 9am home standby. I feel like I’ll be pulled for a turn around cause I can’t believe I’ve not had one yet, but if there are crew control reading my blog, I’d really really really really like a Manchester flight. Please?