Since my recent trip to Hong Kong I have also done a layover trip to Manchester where I visited home but as I didn’t really do too much and my family weren’t even there as they were on holiday in Mykonos (thanks for the invite guys!) there didn’t seem much point doing a post on it. I was originally rostered a turn around flight to Medina in Saudi Arabia, I’m not a massive fan of turn around flights as we just land into the destination and come straight back. So as I had a couple of days off before hand I put this up on the swaps page to try my luck for a layover and someone sent me a swap for Düsseldorf to extend their leave and it also meant that I could also go home earlier as after that flight I have 5 days off to also go home myself!

The flight departed Dubai International Airport at 8:30am and it was an incredibly light load which made such a nice change. With two services to do they were done pretty quickly which gave a good chance to interact with customers and visit the flight deck. Pretty soon we were landing into Düsseldorf International Airport just in time for lunch time, ready to go and explore a new city. I hadn’t had much sleep before the flight, in fact I’d only had a 90 minute sleep and not much sleep the night before that too, so I wanted nothing more than to crawl into bed. But I powered through, got changed and headed straight into the city.

I was told I had to take the train and then the metro to the Old Town to best see Düsseldorf. Without any internet to Google Map the way and having incredibly limited German vocab it was a bit of a task getting there however I arrived into the city centre for the heavens to open and the downpour to begin… This is my 5th destination in a row now where it has rained!! Has someone given me a bad weather omen? I didn’t let the rain bother me anyhow and I began to wander round, not exactly knowing what to do or where to go.
The city is very similar to other German destinations I’ve been to but with the Euros (football) being on that evening a lot of the streets were filled with bars and pubs opening up into the street to watch the game. I would have maybe stayed for a Stein and to watch a bit of the match but as it was raining and I was on my own and I was actually really struggling to keep my eyes open I decided to keep on wandering and see what the rest of the city was about. 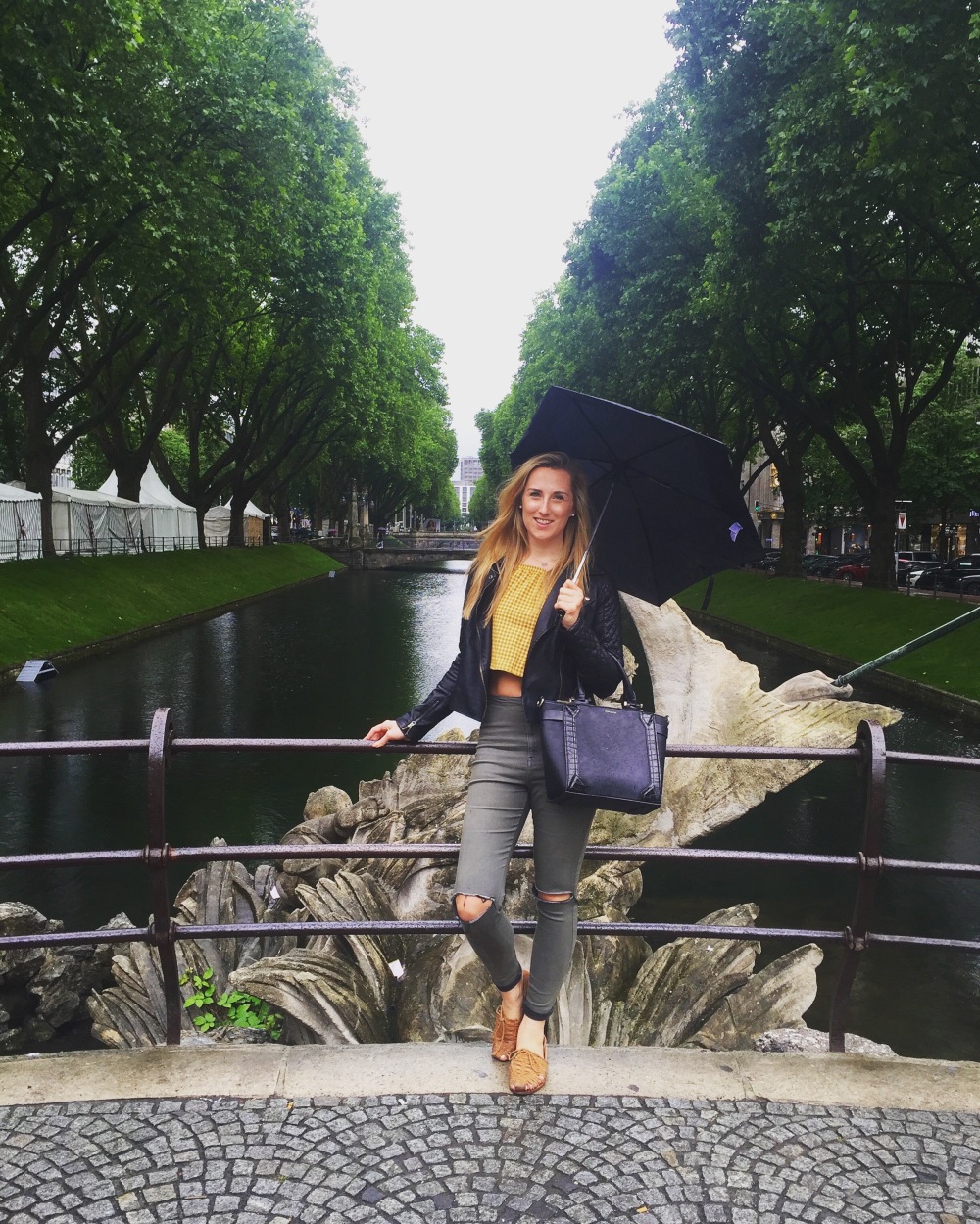 However there wasn’t very much to do other than eat and shop. I can imagine the city to be lovely on a nice summer’s day however it was a bit miserable and the one attraction I wanted to see the Rheinturium (A revolving restaurant with good views of the city) I couldn’t actually find haha.

After a short while and a look in a few of the shops for a new outfit for the weekend I headed back in the direction of the hotel as best I could. The term “Entschuldigen, sprechen sie Englisch?” (Excuse me, do you speak English?) came in very useful as all public transport seemed to be in German and I didn’t have a clue how to find my platform or the direction of travel on the many platforms at Düsseldorf HBF Station.
I eventually made it back to the hotel where I ordered some room service, skyped my Mum and finally passed out in bed where I slept for a much needed 15 hours, although it still didn’t feel long enough and I still grabbed a latte with my breakfast to wake myself up that bit more! The flight back was an even lighter load than on the way back which again made a nice change and when we landed into Dubai, I had 3 hours before i had to be back on my next flight as a passenger to Manchester. I have 6 days at home now before I head back to Dubai to go to Kuala Lumpur!!! I FINALLY managed to swap a Hong Kong flight and for a new destination that I am really excited for.
A pretty simple blog post for me. A new destination to tick off the list but not somewhere that I would be returning to in a rush.
As always, feel free to follow me on Twitter and instagram for more daily updates:
http://www.twitter.com/Jessicaaahhh
http://www.instagram.com/Jessicaaahhh