I am in love with South Africa. It has gone to my favourite destination visited so far. We departed Dubai around 5:30am and landed into Johannesburg just after lunch time. We checked into the hotel and 20 minutes later I was meeting two of the other crew to head to the Lion Park – something I had been wanting to do for so long! We were picked up and taken over to the other Emirates Crew hotel where we collected three other crew members who were on the earlier flight and headed over to the Lion Park. 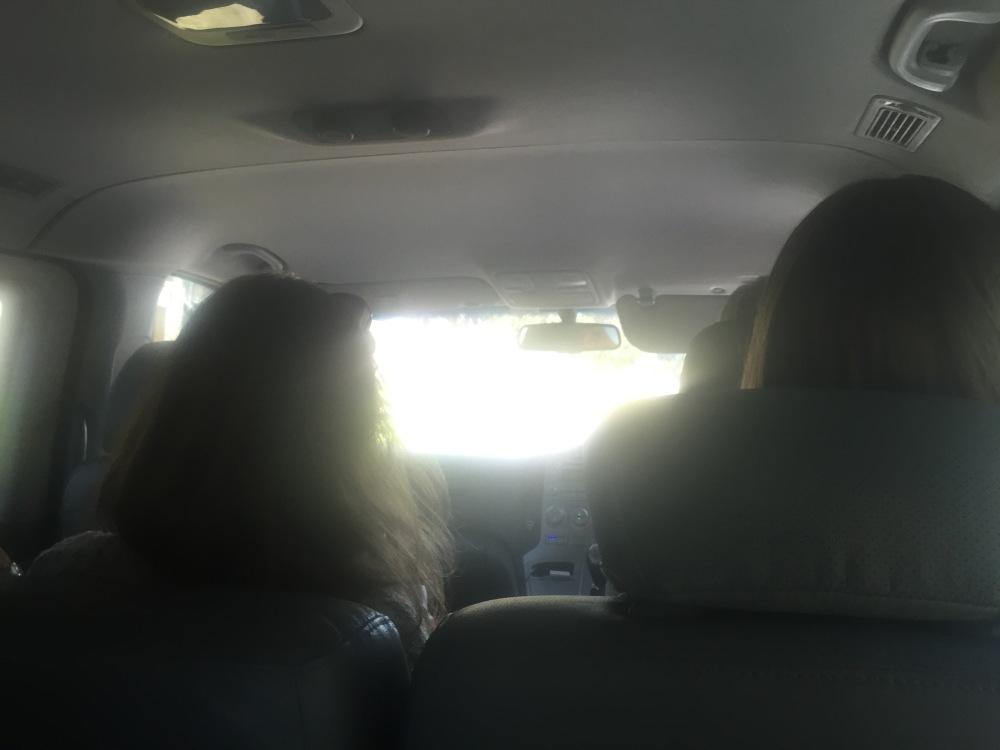 Upon arriving at the Lion Park we went straight on the safari around the grounds of the reserve. We were in a caged truck with a few others and the game keeper drove us round to see all the animals. First up was the zebra! 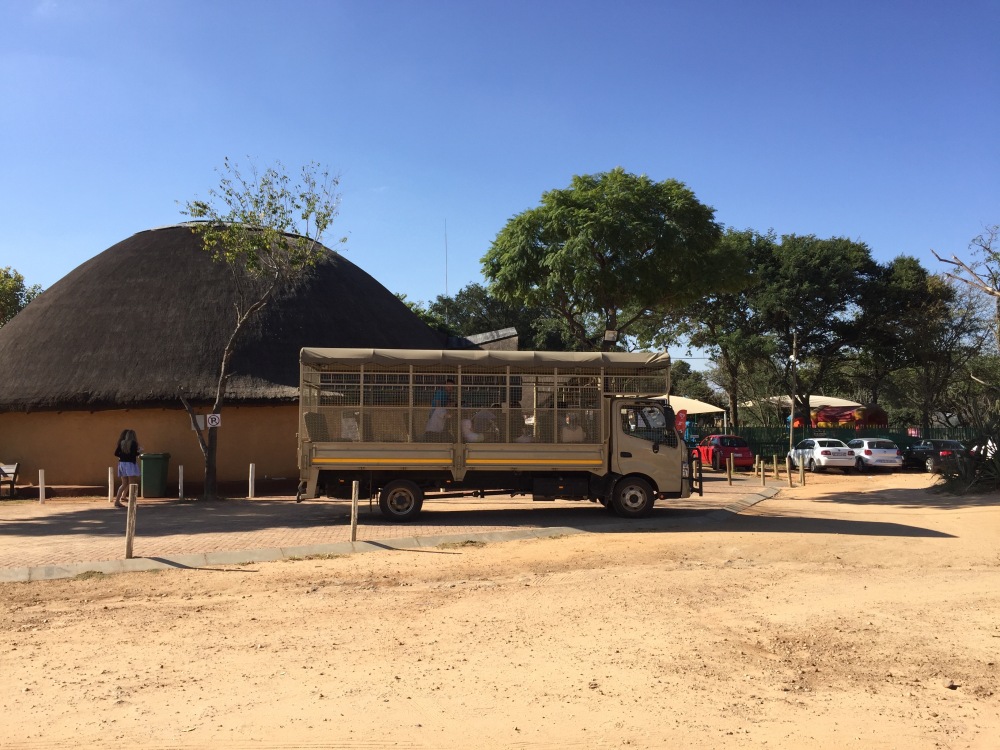 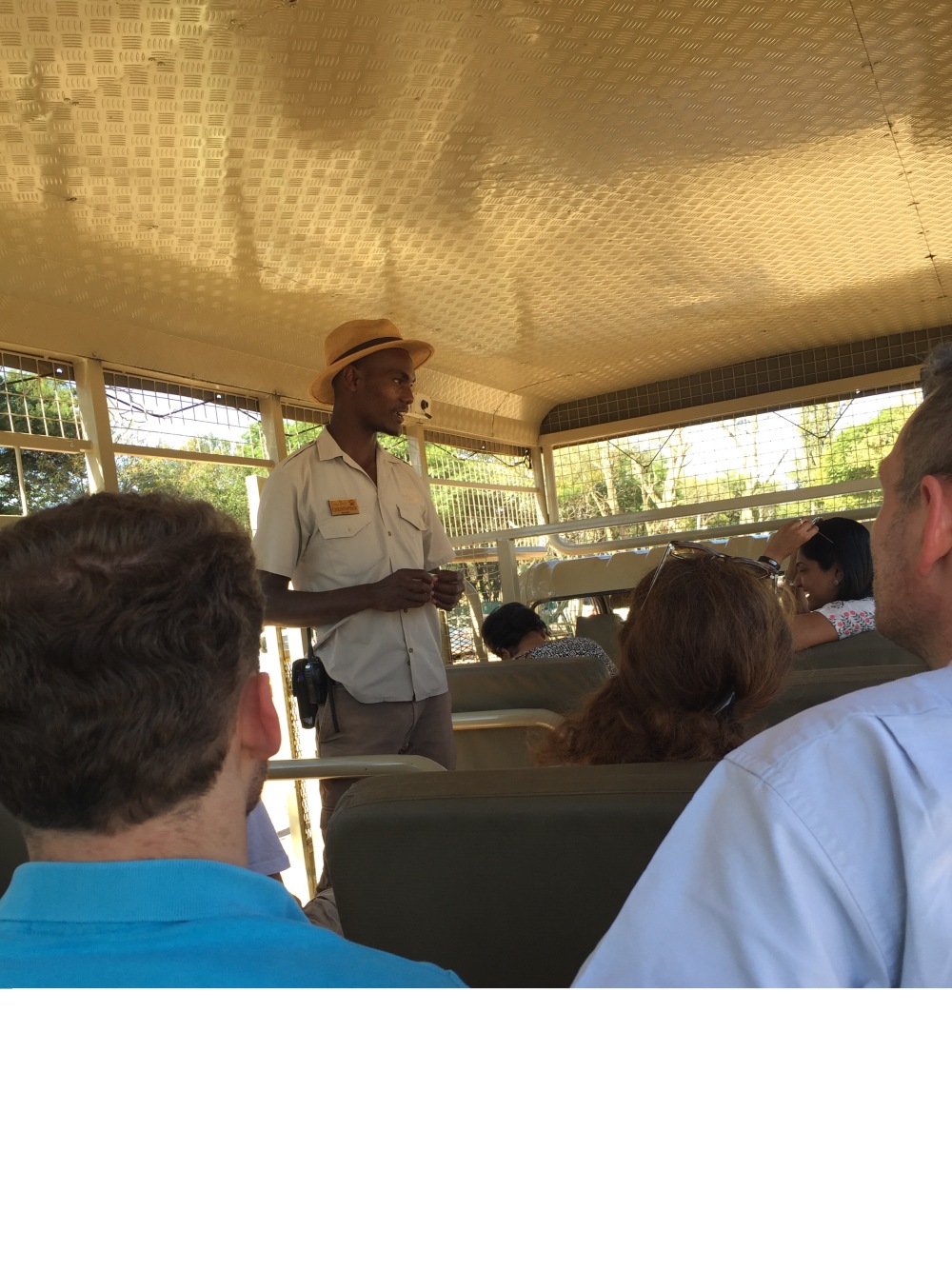 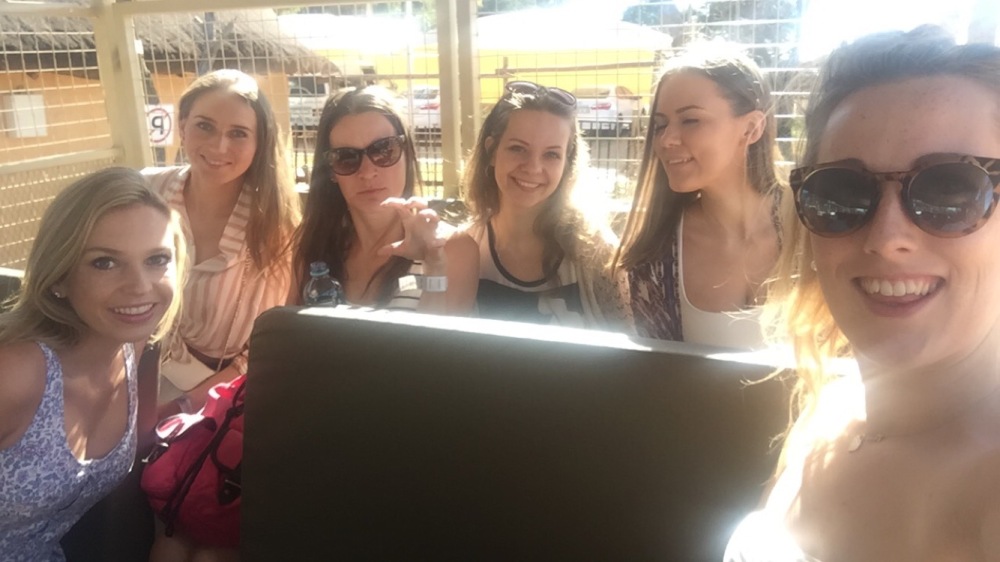 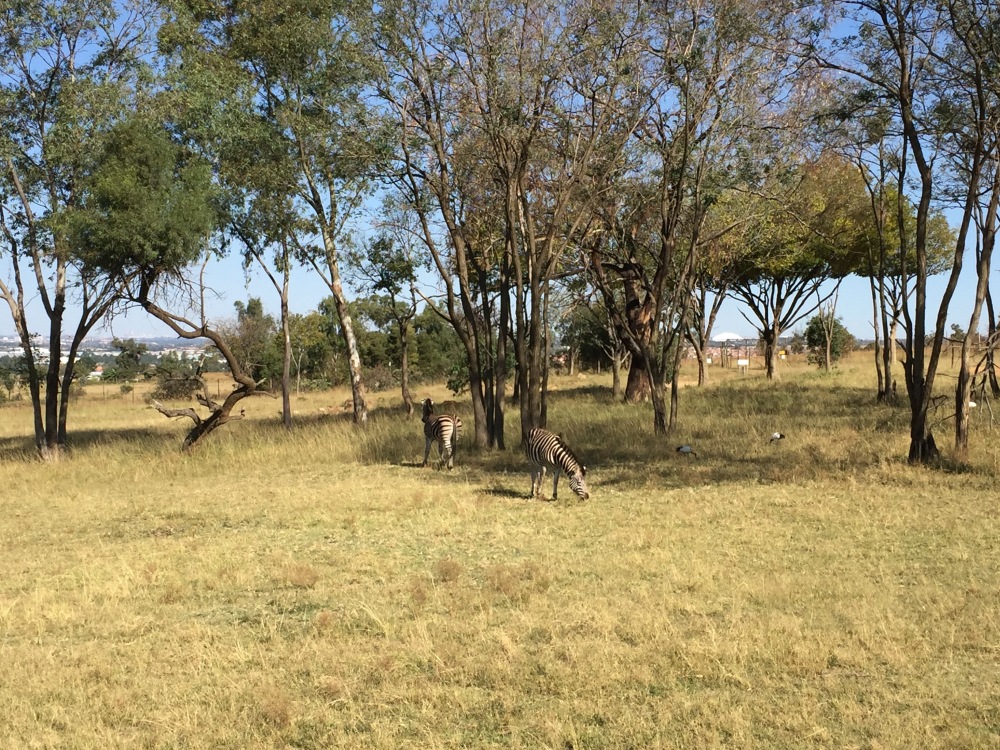 Then the Springboc, who can jump between 1-3 meters high! 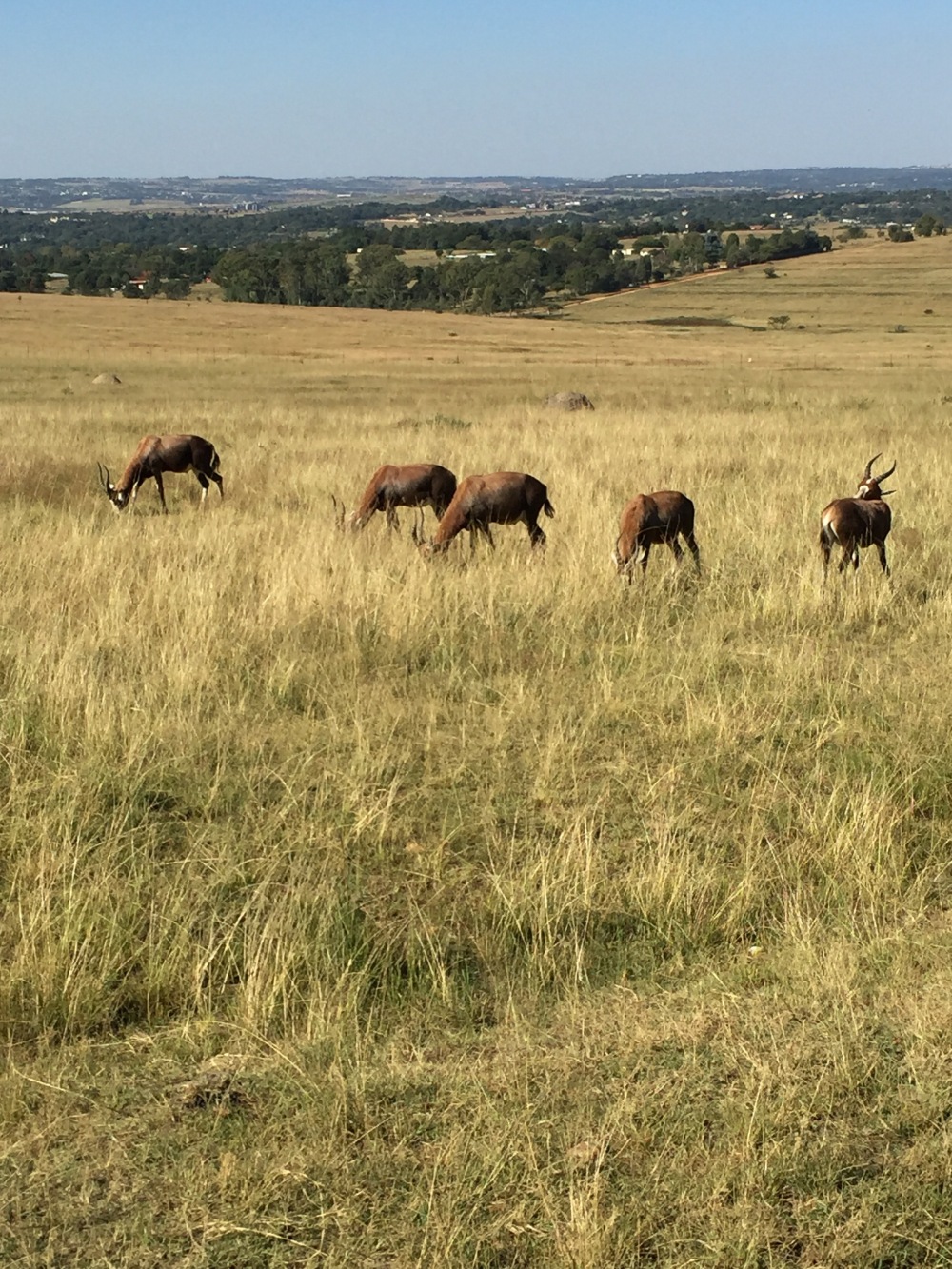 Next was onto the lions and the white lions! The game keeper had some pieces of meat and was chucking it to the lions so they would come closer to the cage, they even threw themselves up against the sides of the truck – which made me jump every single time to see a lion so close up. An interesting fact, if a lion was to lick your skin in the same place for two minutes, as its tongue is so rough, you would have no skin left. 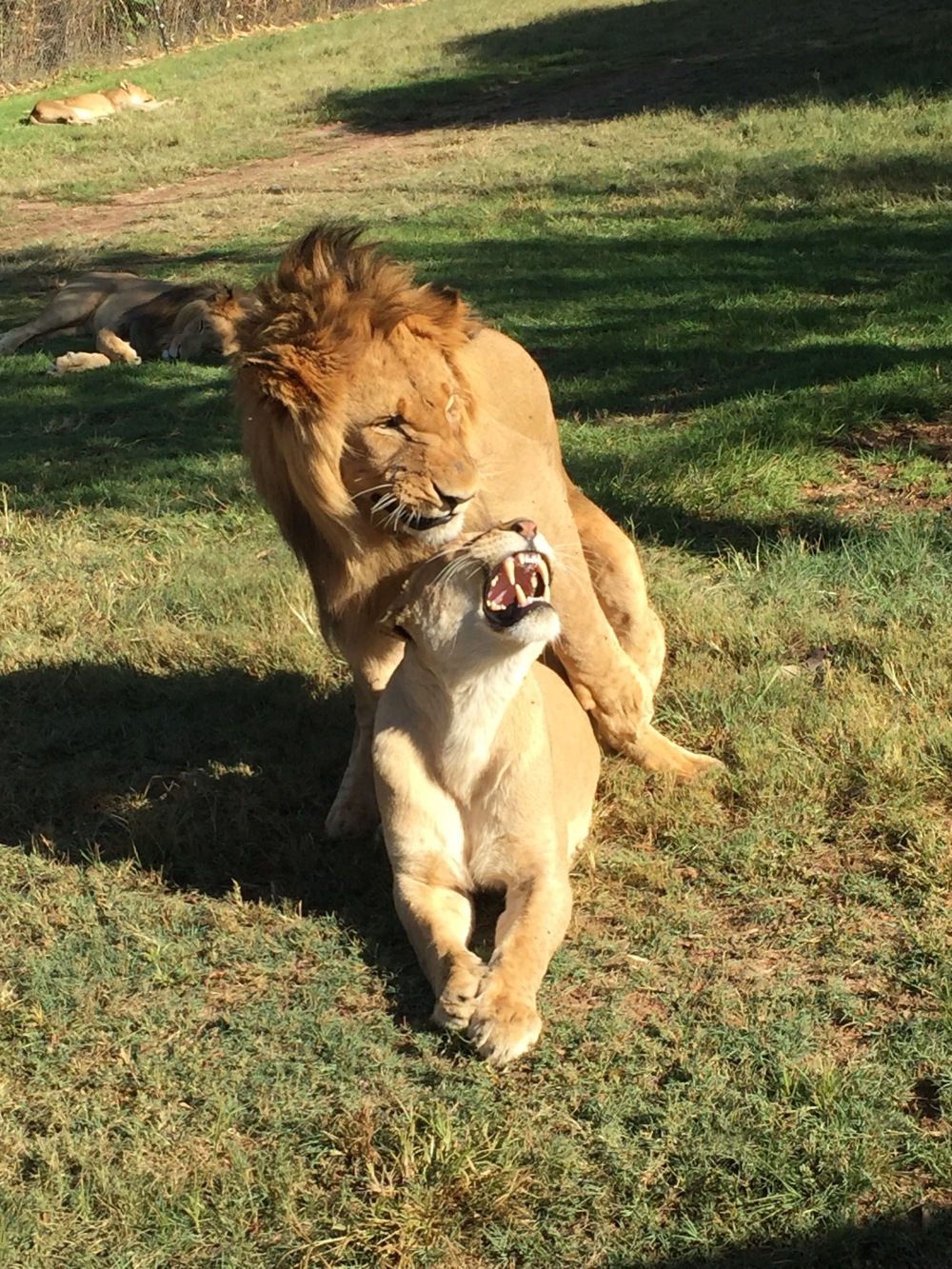 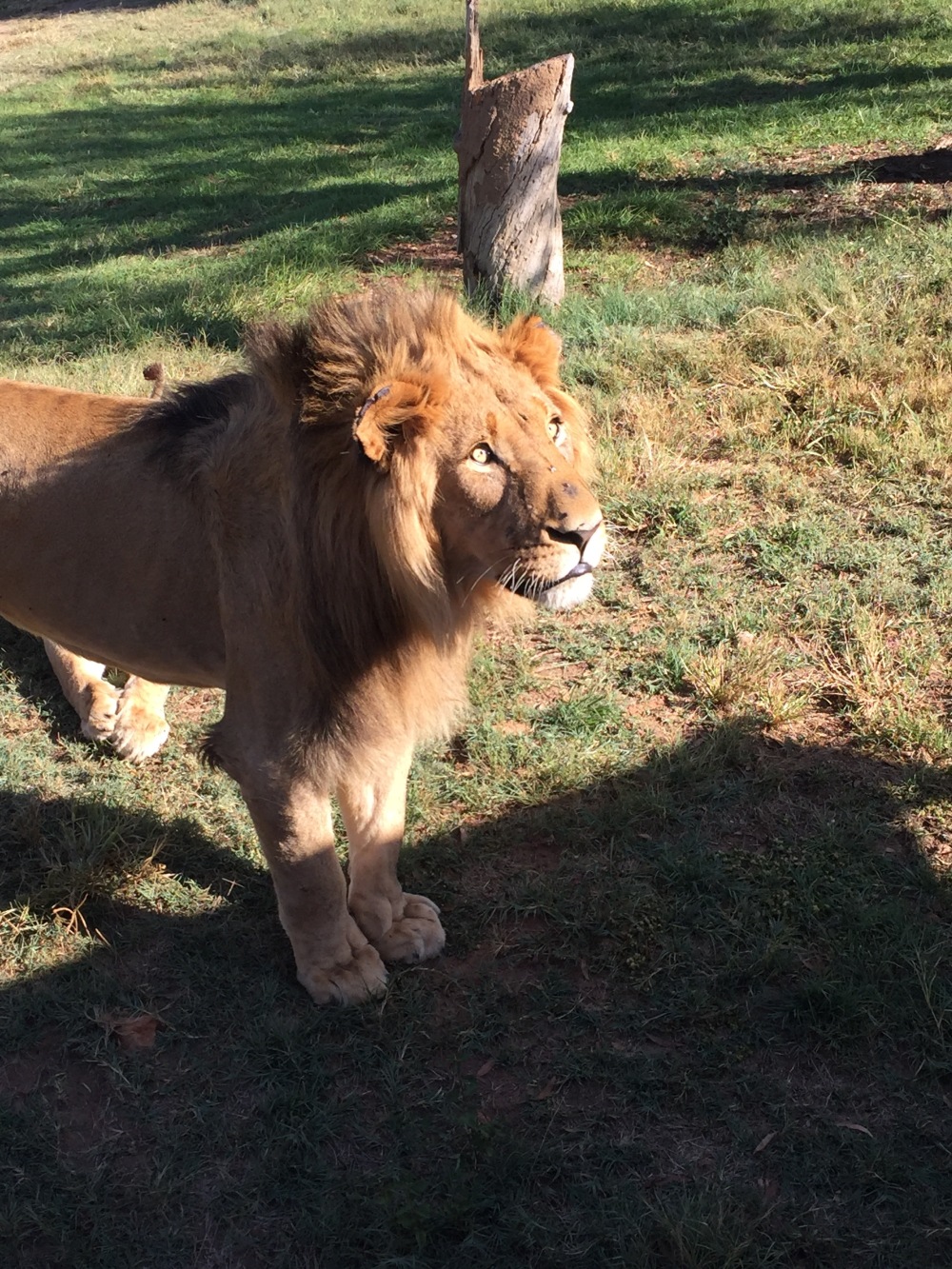 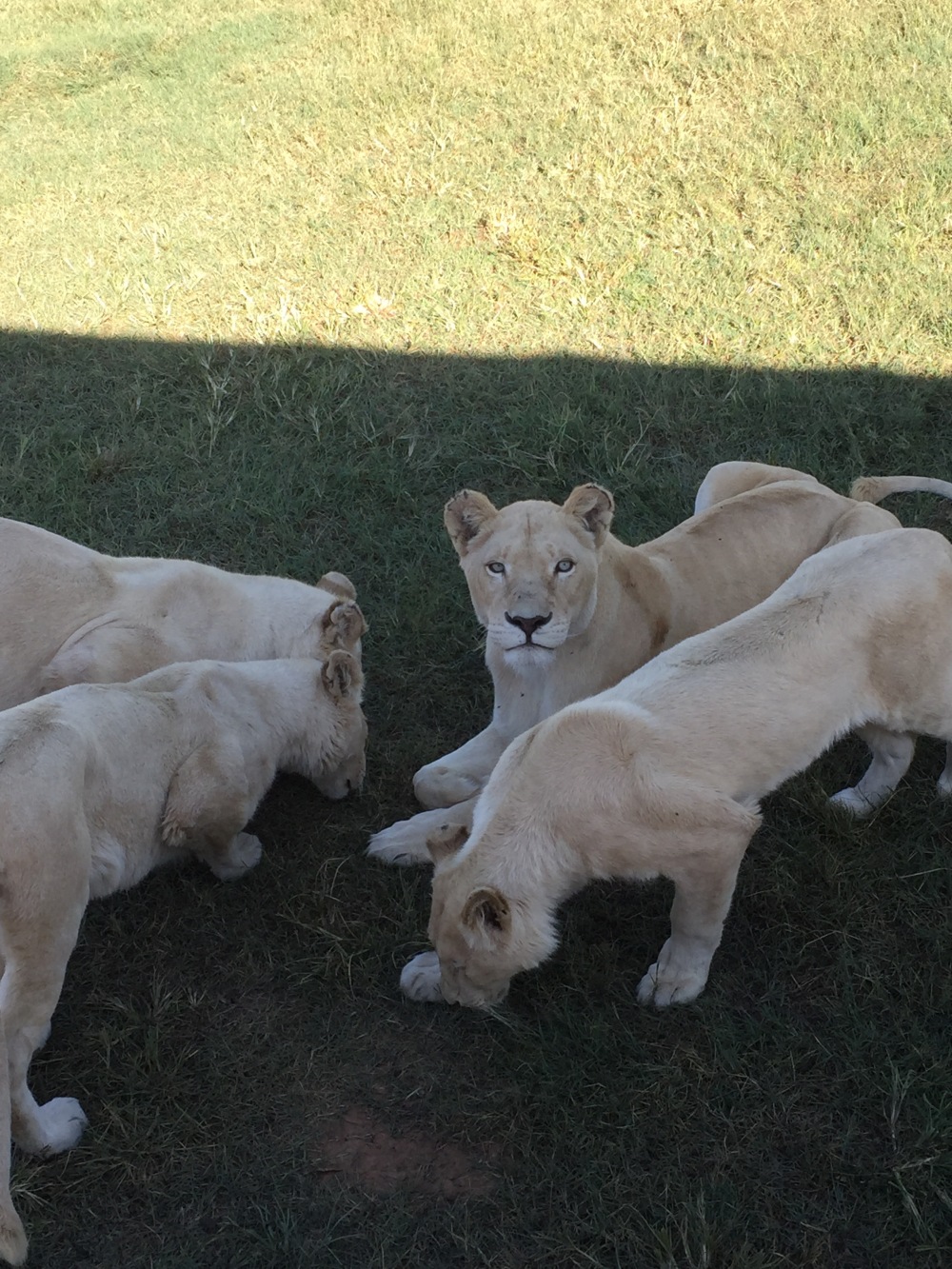 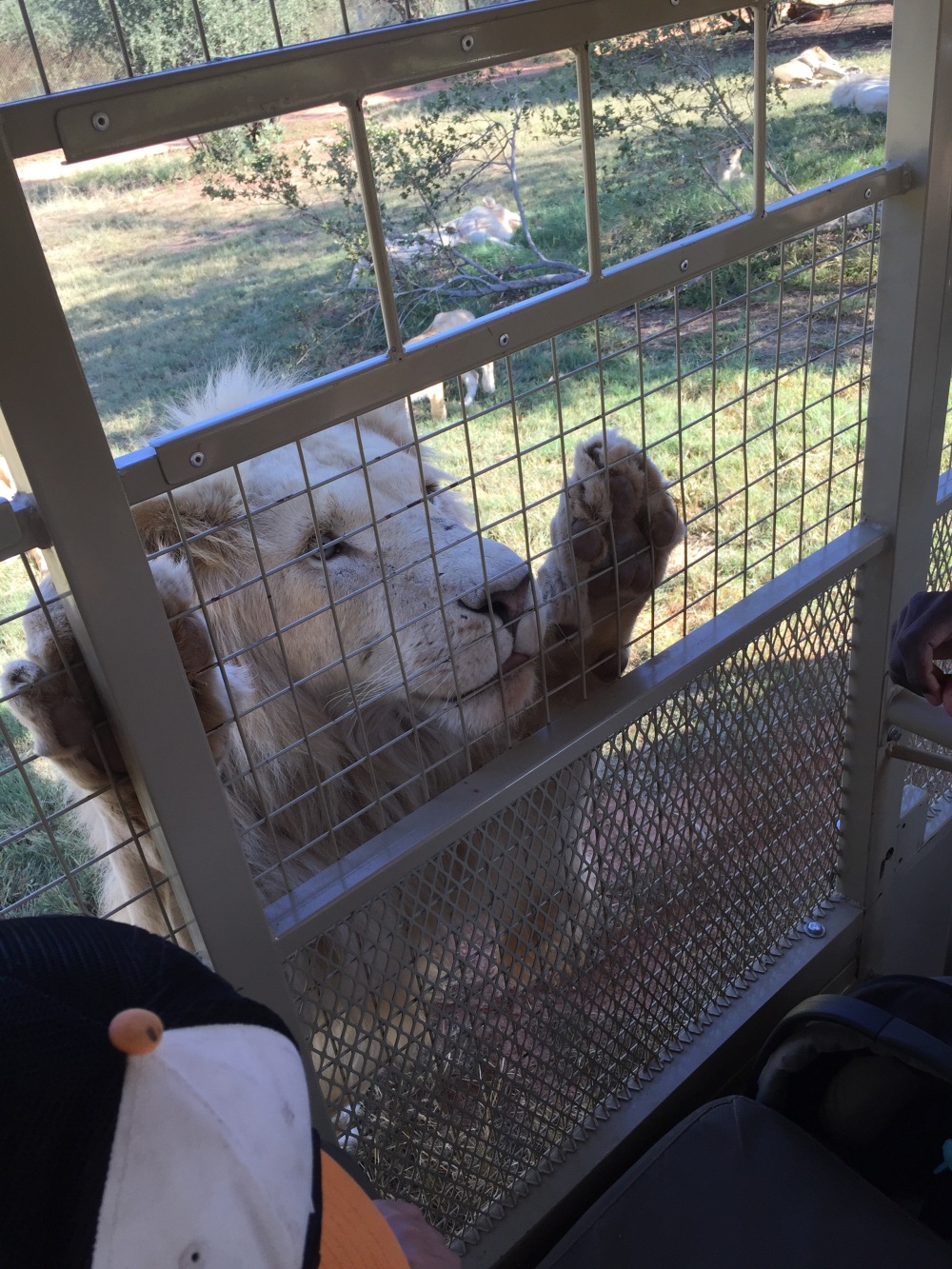 I can’t get over how gorgeous and piercing lions eyes are, they are so blue! The next area we went through to was the wild dogs, and they have such large round ears! Many people also confuse this animal with the hyena, but we saw those later on. 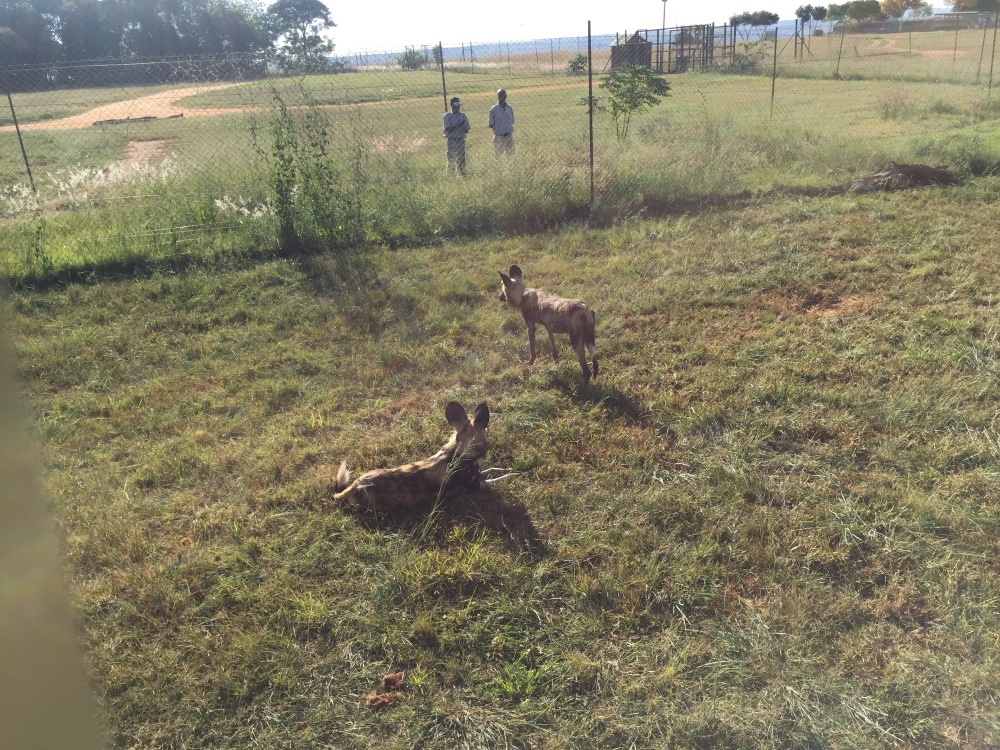 And then after this it was onto the cheetahs, who were actually used in the film Blended (with Drew Barrymore and Adam Sandler) if anyone has seen it? The Cheetahs can also be hired for weddings to carry rings etc and are very popular! 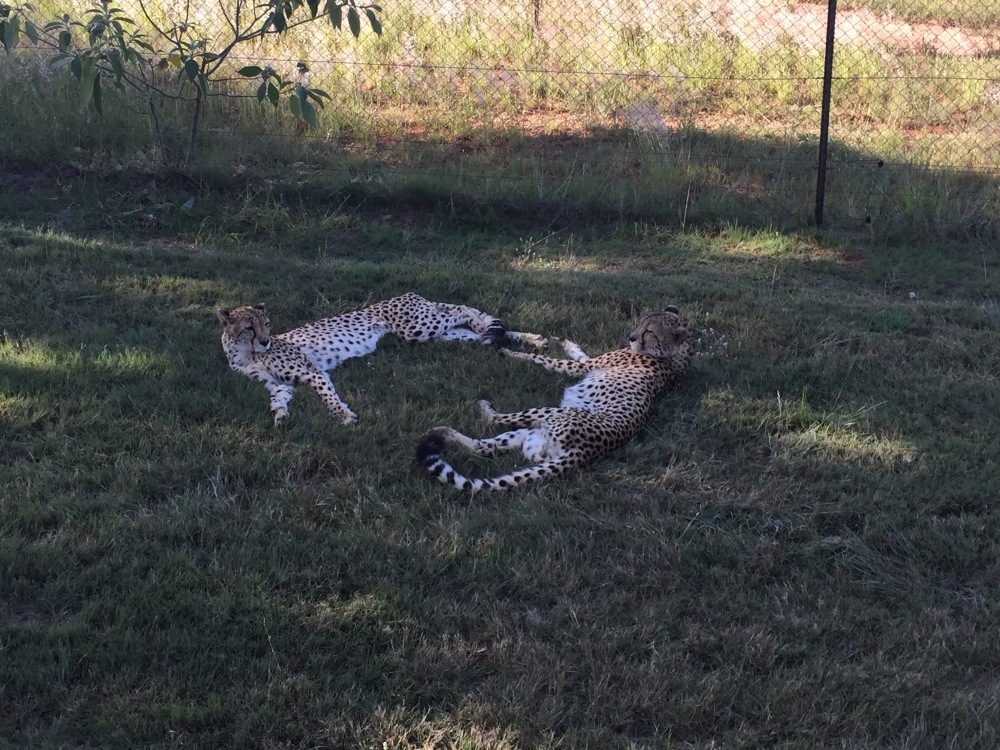 The safari ended after this and we were then allowed to roam around the rest of the park to see the other animals and to have a more interactive experience. We first went to feed the giraffes. The park has two giraffes however only one – Zoey – was at the feeding stand, and they have the longest blackest tongues, it’s so strange! 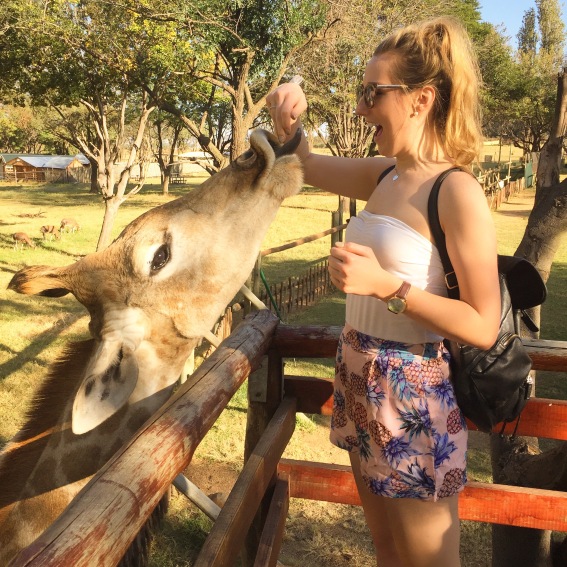 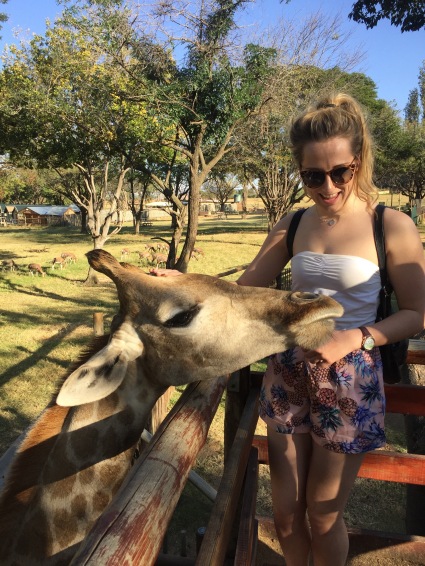 After this we went to see the meerkats, which seemed so much smaller than the ones I have seen in England. Their enclosure also reminded me of whack-a-mole as they kept bobbing up and down and in and out of the little holes. 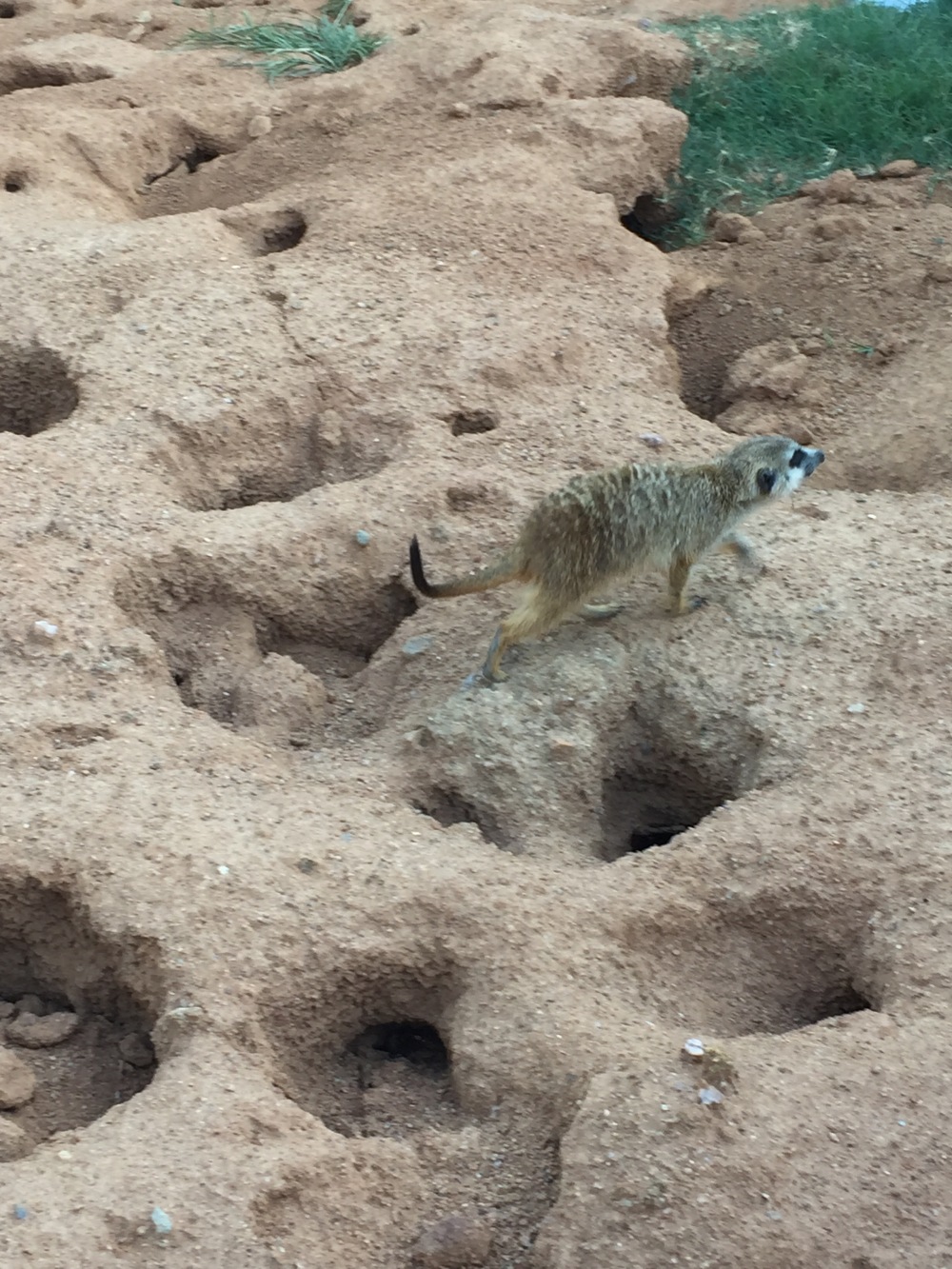 Next it was onto going to see the little lion cubs which was the main thing I was looking forward to when visiting Johannesburg! Most people think that the animals are sedated so that it is safe to be around them but thats not the case here. Lion Cubs actually sleep for around 18 hours a day, so they’re actually just very lazy- I think I may have been a lion cub in my past life. They enjoyed trying to grab my ponytail with their paws though!! 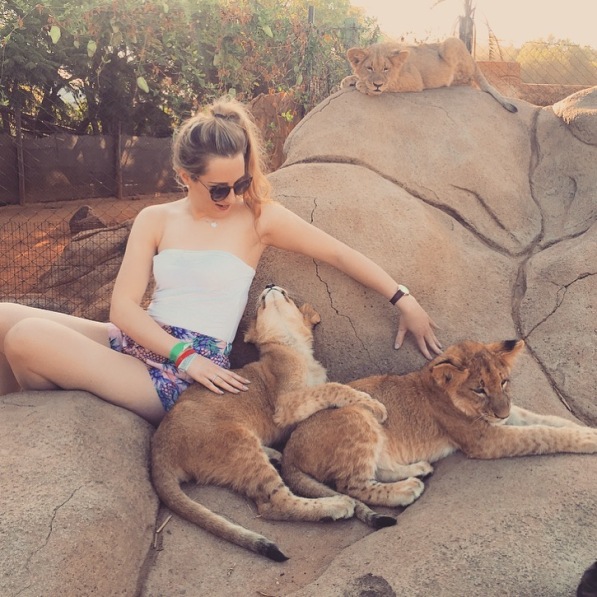 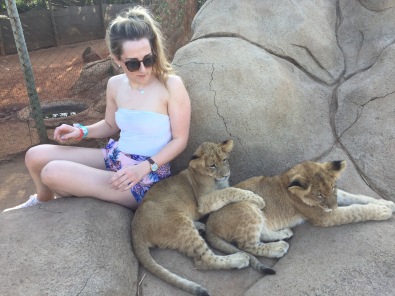 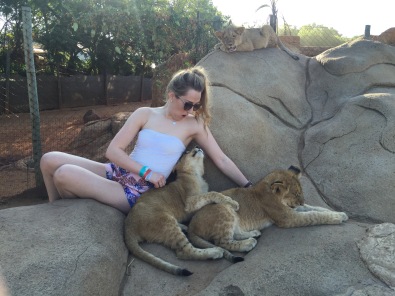 After this we went into the cheetah enclosure to pet the cheetah and take some pictures. For people who don’t know me, I’m scared of dogs (I know I’m weird but as a kid I’ve always been frightened) so it was quite a big thing for me to go in there. We went in and the gate was quickly shut and the cheetah was pacing around the enclosure which had me on edge as it was. As the lion cub enclosure was next door the cheetah caught sight of the cub and started growling which really started to panic me and it got me so scared that I started to cry and left the enclosure so the only picture I got of the cheetah in the enclosure was this one… I’m a disappointment I know, sorry guys. 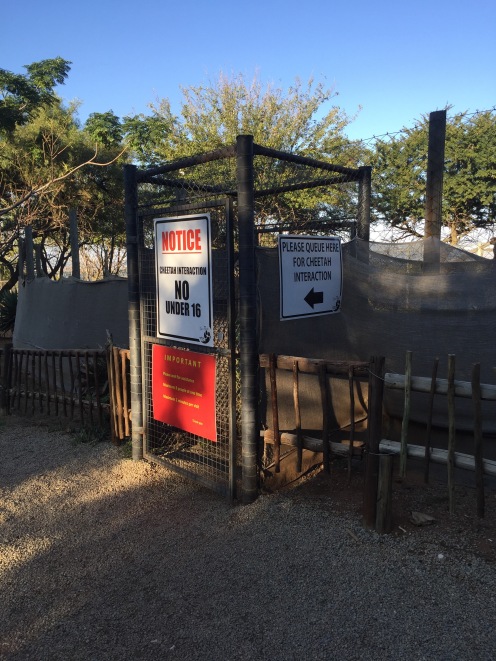 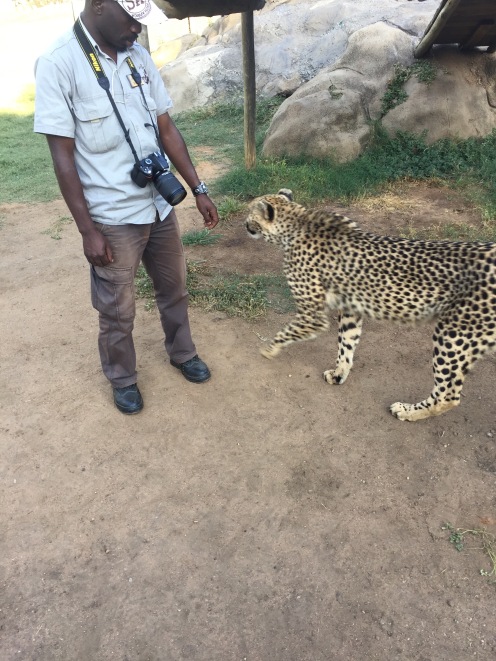 After this we went to the gift shop and bought some souvenirs and we were so ready to get back to the hotel and finally go to bed as it was getting towards being awake for over 31 hours now. I was sat outside the photo shop whilst some of the other girls waited for their pictures to be printed when a giraffe just strolled right past us, you don’t realise how tall they are until you’re sat underneath one!! 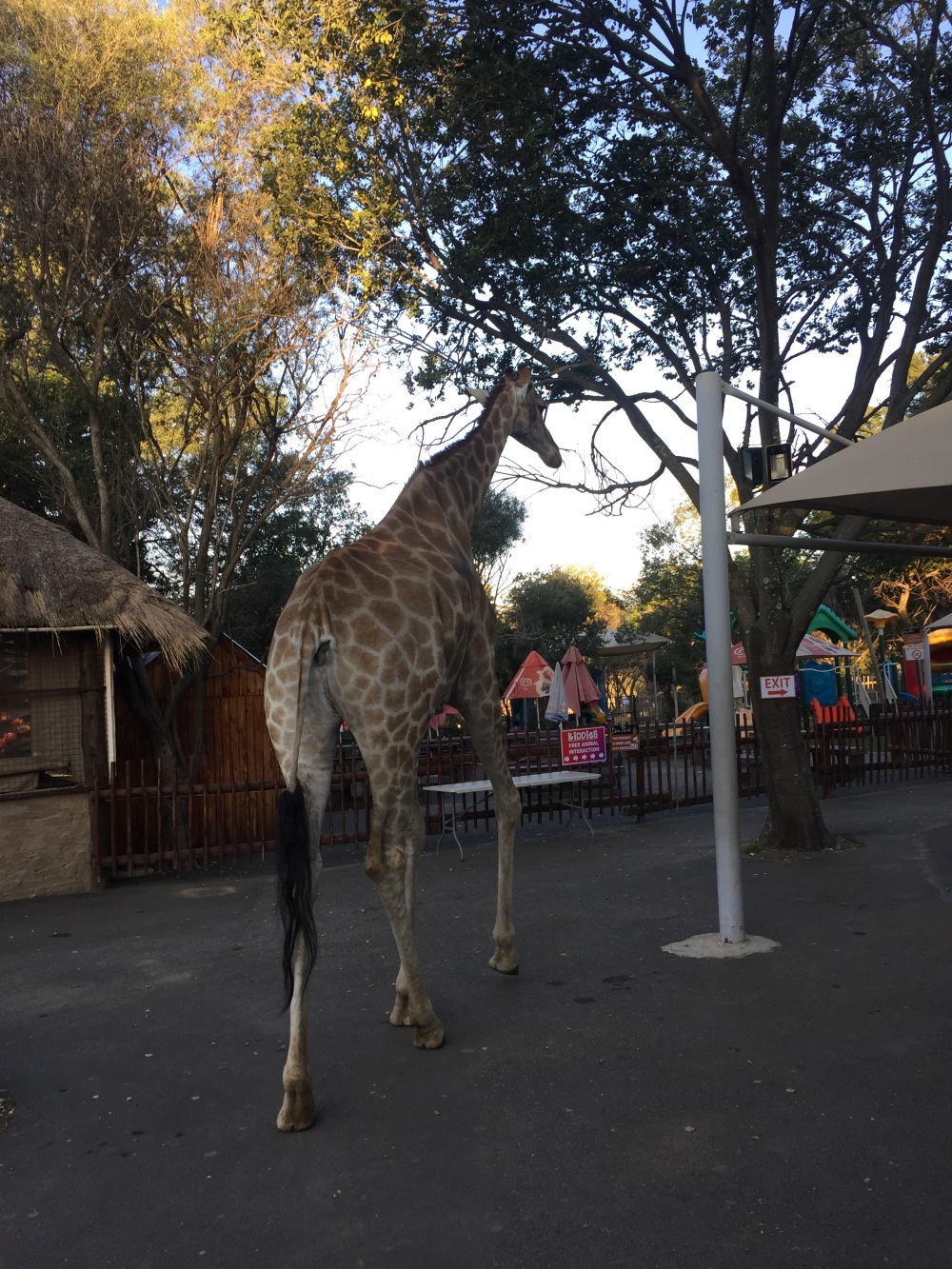 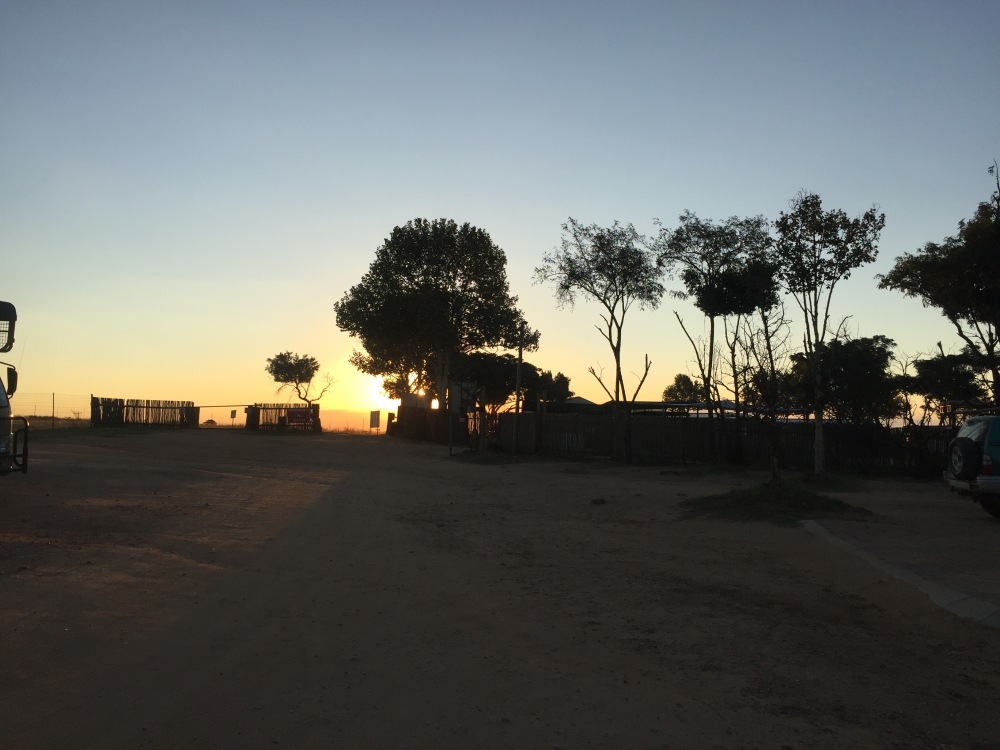 We drove back to the hotel and I got back into my room and ordered a steak (a must when in South Africa) and a milkshake. The hotel we stay at is amazing and my room was Audrey Hepburn themed which was so fabulous. The hotel is also known for their amazing milkshakes. We were given little ones on arrival when we checked in, but I ordered a large salted caramel popcorn milkshake which was the biggest thing I have ever seen but was so yummy!! 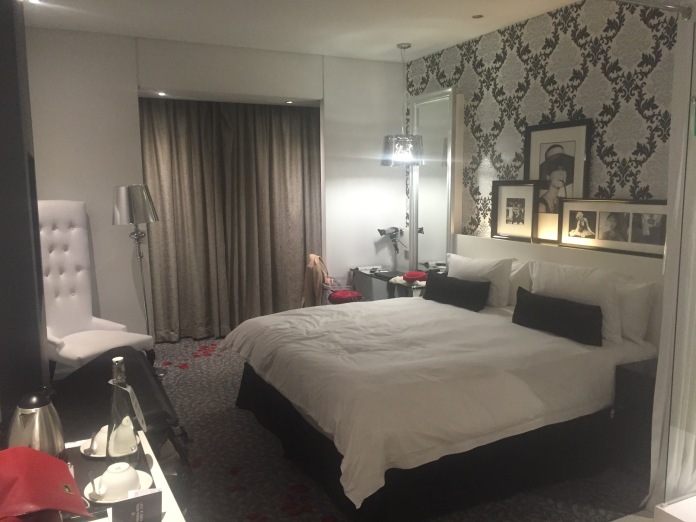 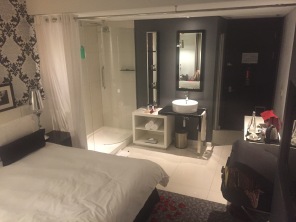 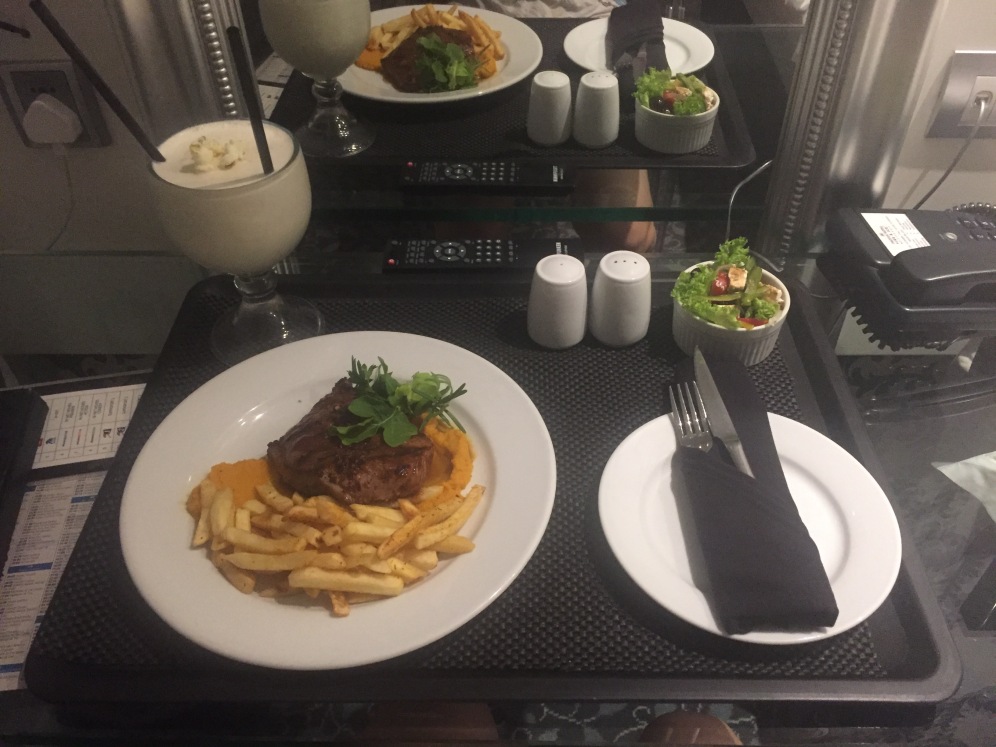 After this I crashed out in bed and slept right through until the wake up call the next morning. I had wanted to go out and buy some steak and wine to take back to Dubai with me – when in Africa, ey? Except I was so exhausted from the lack of sleep, the flight over and the visiting of the Lion Park that I just couldn’t drag myself out of that big comfortable bed, so there’s always next time! 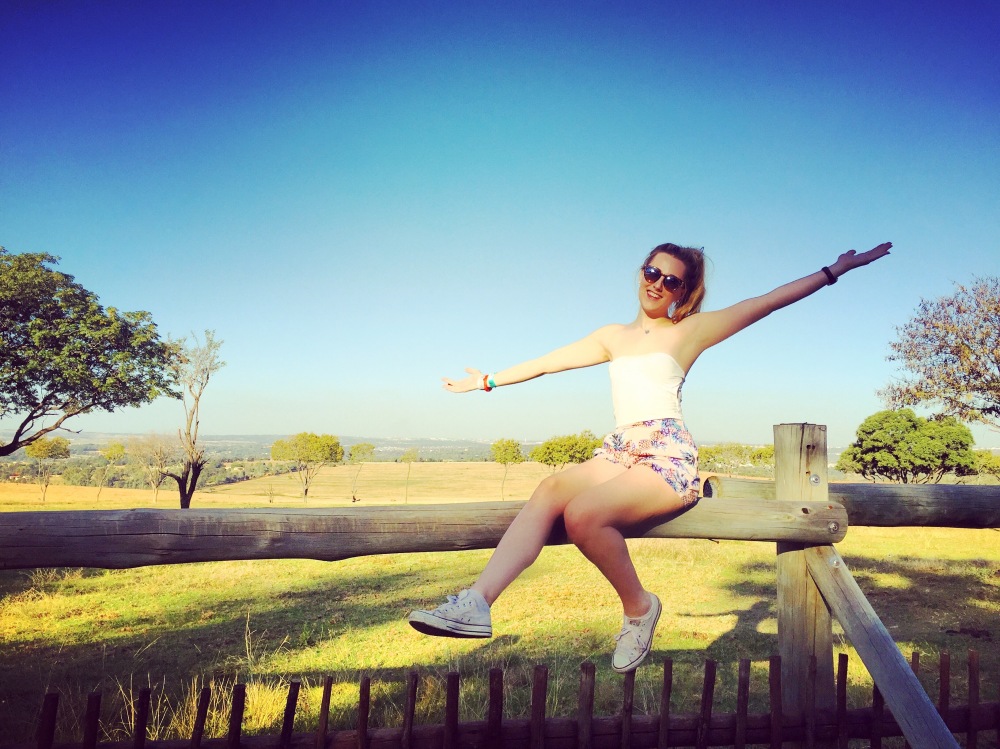 Johannesburg you were amazing, and I cannot wait to explore more of South Africa, I will definitely be bidding for Cape Town in June as I’ve heard that it is absolutely breath taking!