So I was originally rostered to be going to Lagos in Nigeria however I am VERY prone to being bitten so I wasn’t looking forward to that and there’s actually not very much to do there. So I tried my luck on the swap page and sent out lots of swaps for different UK flights and was given a Glasgow in return! My friend goes to the University there so I knew I would be able to see her and potentially head over to Edinburgh as I’ve always wanted to visit.

We flew out of Dubai in the afternoon and it was a full flight non stop on the way over, I also did Duty Free for the first time which I found a bit stressful but I’ll soon get the hang of it I’m sure. We landed into Glasgow around 8pm and we completed our landing duties, collected our luggage and made our way to the hotel. I checked in and got changed as quickly as I could and took a taxi over to my friends uni house so she could show me the nightlife and student life of Glasgow!

We went to a club called Garage which was so much fun and I made sure I called for some cheesy chips and gravy on the way home – the best thing to get from the take away! I then went back to my hotel and went to sleep ready to get up and explore the next day.

I had discussed meeting with my friend in Edinburgh however due to a bit of a break down in communication it became a bit late for me to head over there, see her and the city and also get back to the hotel and have a sleep before the wake up call. So I decided to wander into Glasgow City Centre and do some much needed shopping in all my favourite UK stores! The weather was gorgeous too, such a perfect spring day and the sun was really shining.

As I was wandering around I came across The Royal Exchange Square where there is a statue of the Duke of Wellington, it made me laugh as it had a cone on its head and I thought how on earth has someone got that up there? Anyway, I took a picture as it made me laugh and then continued on towards the high street. But then I saw a man dressed as the statue also with a cone on his head? So I was thinking to myself, is this cone actually meant to be there?! And my friend explained that someone had managed to get it up there on a night out and it had just been left there ever since and according to Wikipedia “is one of the city’s most iconic images”. How bizarre, ey? 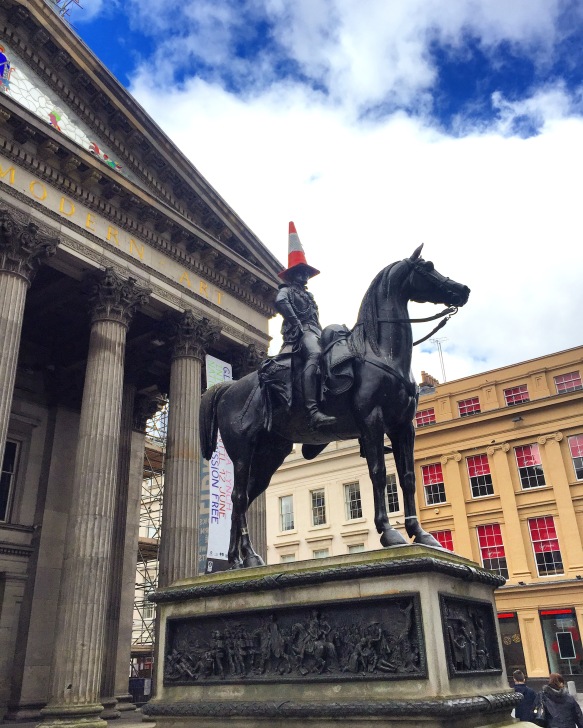 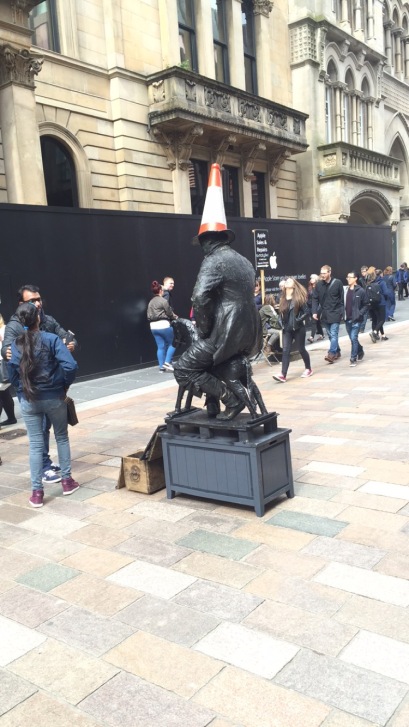 I shopped till I could shop no more and then headed back to the hotel for a snooze before the flight. A perfectly chilled out layover with all the home comforts I needed. I really love the city of Glasgow, it’s a city I could see myself living in. A very unexciting post, but I thought I would keep you updated on my whereabouts. My next layover is in Birmingham also in the UK, but after that I’m back to exploring the world!