So my latest trip was my BKK/HKG/BKK multi sector and the first stop was Bangkok! I was so happy when I saw Bangkok on my February roster as I was looking forward to a massage and visiting a country I hadn’t been to before. We flew at 3am out of Dubai and landed into Bangkok around 12:30pm. 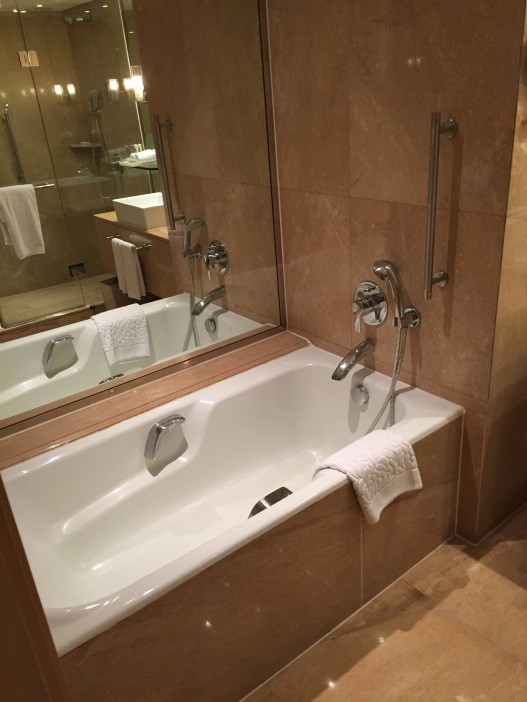 After checking in at the hotel (how gorgeous is my hotel by the way?!), I quickly got changed and went out to explore. None of the other crew fancied doing anything as they had visited before and just wanted to sleep, sunbathe and massage before our next flight. I however had a very different idea, I wanted to go and see what Bangkok was all about. I grabbed a map from the concierge and headed in what I thought was the direction of the boat I needed to go on towards the Wat Arun temple. However I ended up wandering around for around 30 minutes before I admitted I was lost and then luckily stumbled upon the boat stop (if that’s what you call it?). 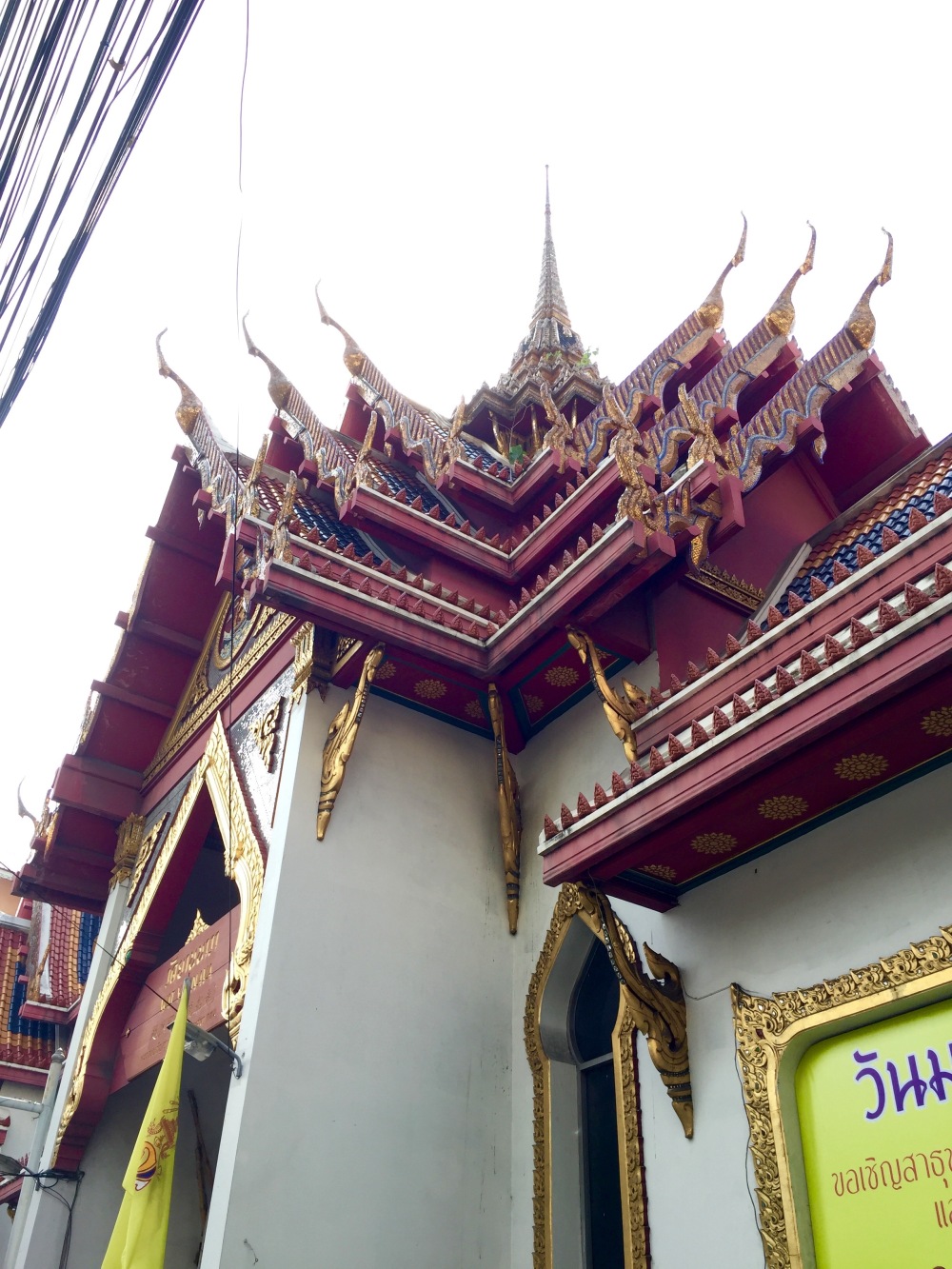 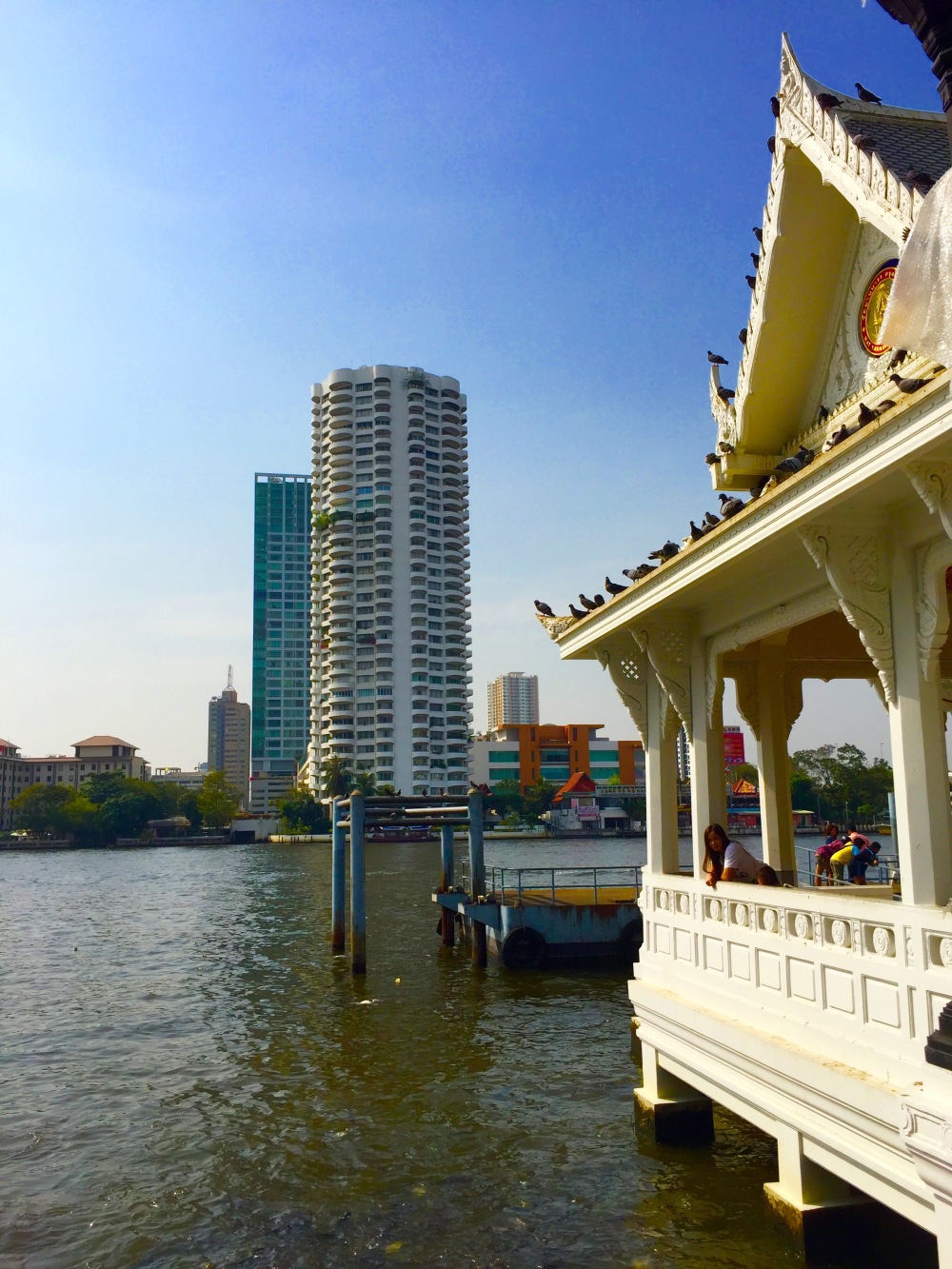 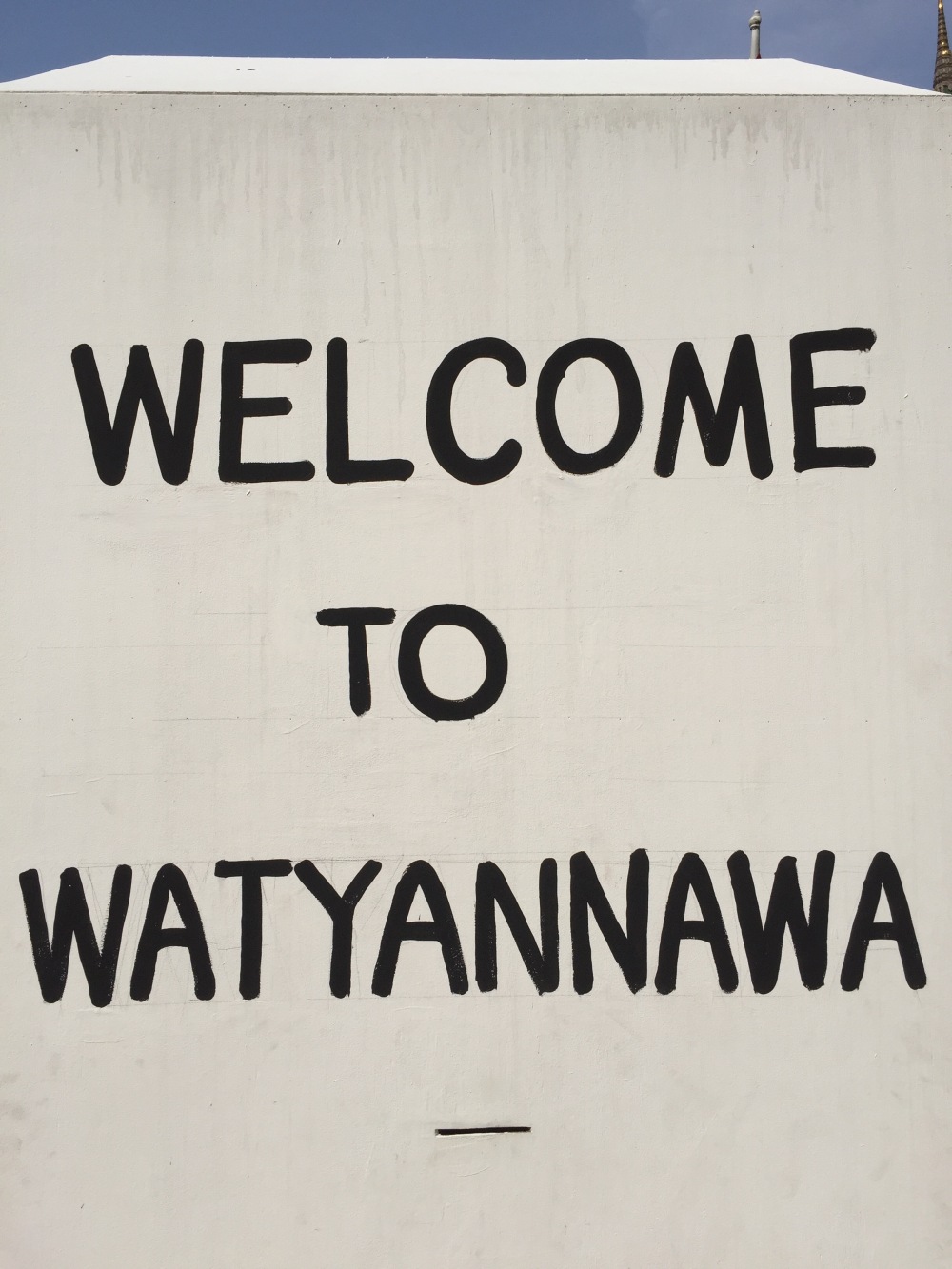 I hopped on and just a short journey later I was outside the Wat Arun temple. However I was incredibly disappointed to see it covered in Scaffolding!? I had a quick wander round but it was a bit of a let down and knowing the reclining Buddha was on the other side of the river, I hopped back on a boat over to see that. 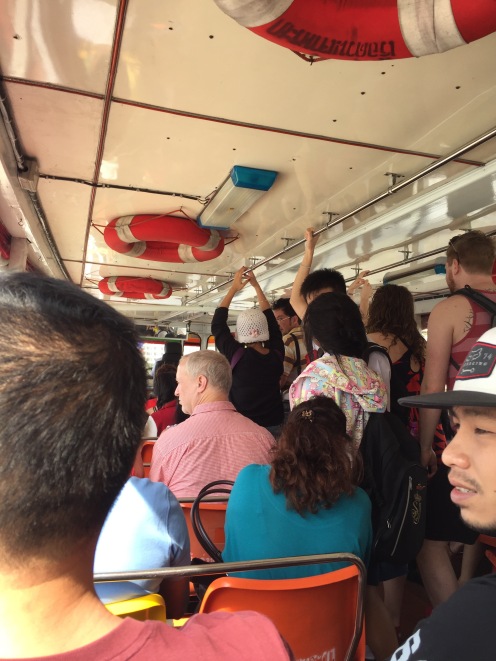 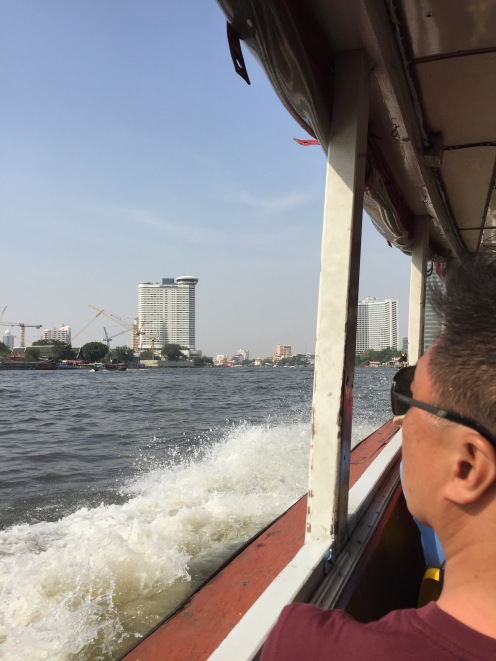 I walked into the area around the temple and realised I wasn’t covered enough to enter, so I had to buy some funky traveller pants to cover myself up before I went in. The ticket to enter cost 100bht and I don’t think I ever contemplated the Buddha being SO big and made entirely of gold. 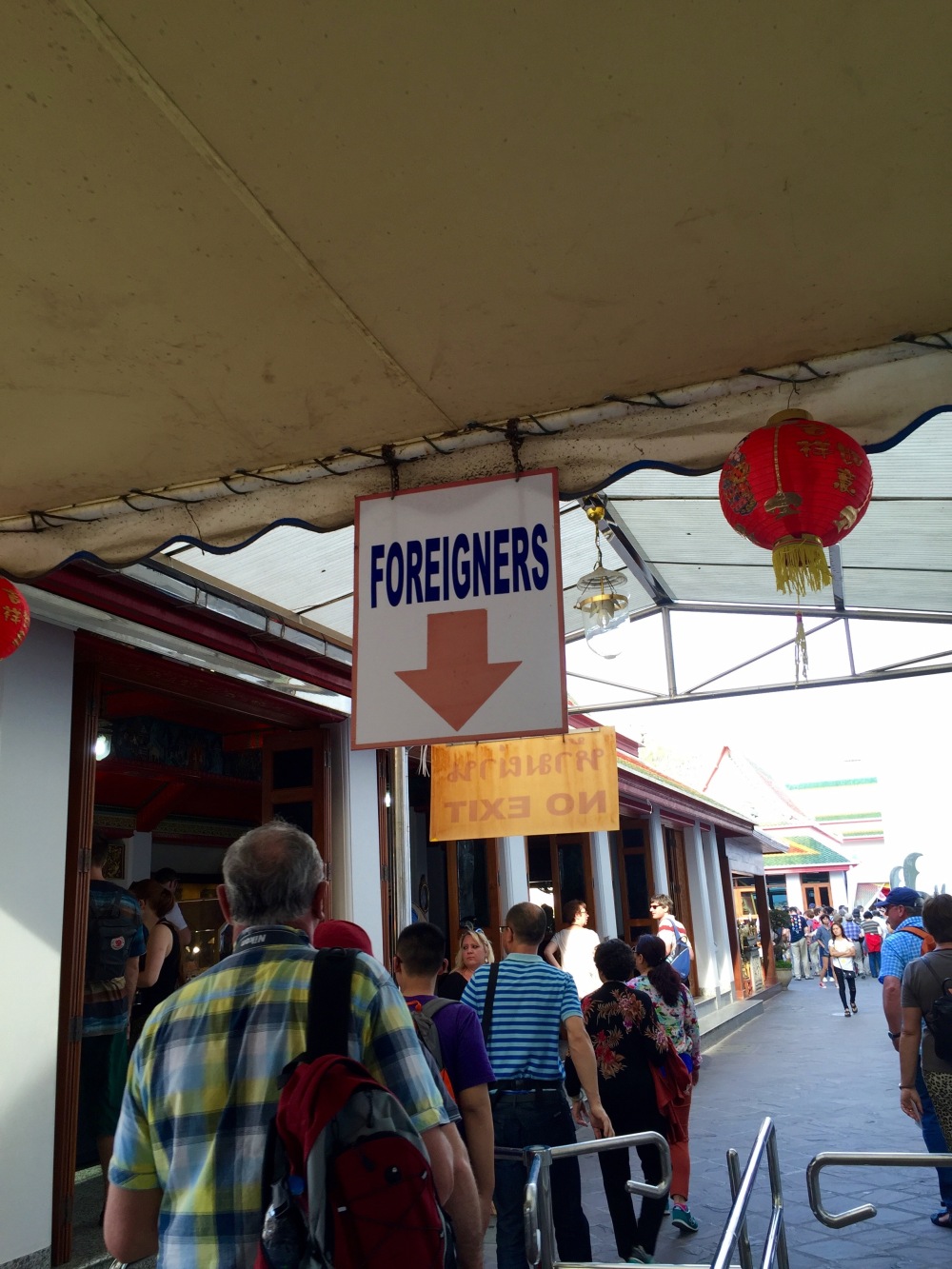 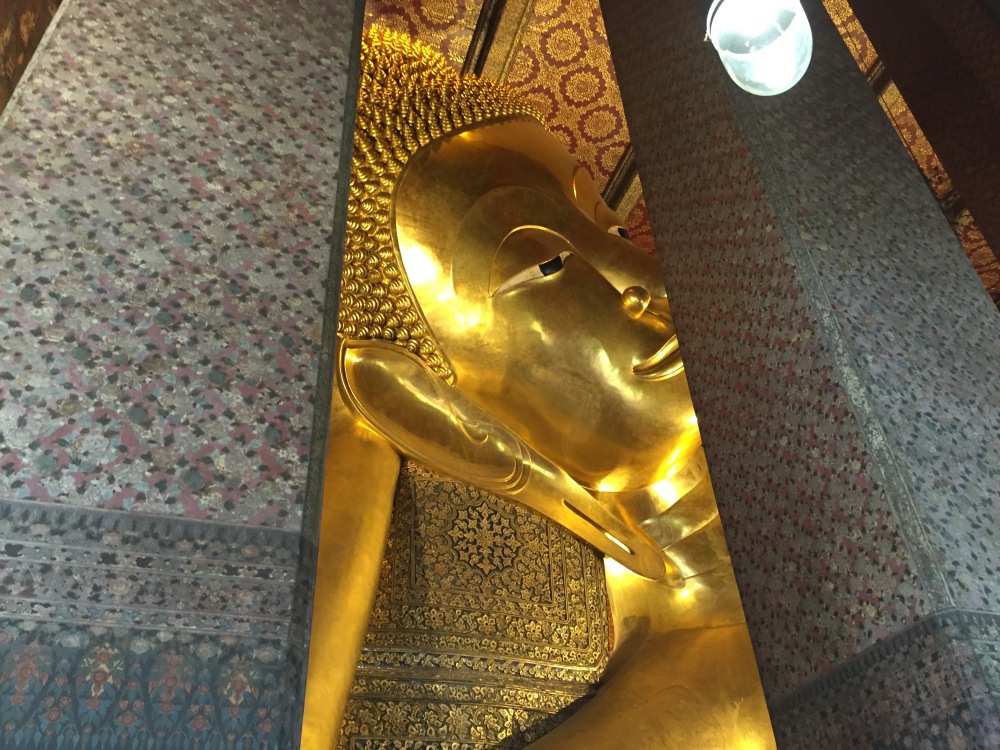 You walked along one side of the temple which had you facing the Buddha, and then you walked back along other side of the Buddha to exit. On the other side were twenty pots for you to place small change into, I believe it’s for good fortune, however I only noticed these half way up so just dropped one coin in one of the pots.

After a wander around the outside of the temple I realised I had been up almost 24 hours now and was feeling tired. So I jumped in a Tuk Tuk and headed back towards the hotel. My first ride on a Tuk Tuk was both hilarious and scary and they are SO unsafe, I was bumping around in the back clinging on for dear life as the driver whizzed in and out of the traffic and down lots of little back streets.

Just before I went back to my room to sleep, I decided to head over to one of the massage parlours I’d been recommended by the crew and went for back and shoulder massage. What I didn’t realise is that I’d chosen a Thai massage so it was nowhere near as relaxing as I wanted to be and I left feeling like I’d been beaten haha. I then headed back to my room for bed for a good nights sleep before the next day’s flight to Hong Kong.

The next morning I woke early, ordered some porridge from room service and got ready for our turn around to Hong Kong. The flights were very hectic as we have a full service to do in a short time and so many passengers wanted to stop and take pictures with us in our uniform. We also had a three hour stop in Hong Kong where we are taken to the premium lounge for something to eat before our next flight.

We landed back into Bangkok around 11:30pm and went back to the hotel for another 24 hours in Bangkok. A few of the crew and I had decided to go out for Thai Street Food. I had been a bit worried about trying street food as I’d heard many horror stories of food poisoning, but a lot of the crew had eaten here before and raved about it so I wasn’t as worried. 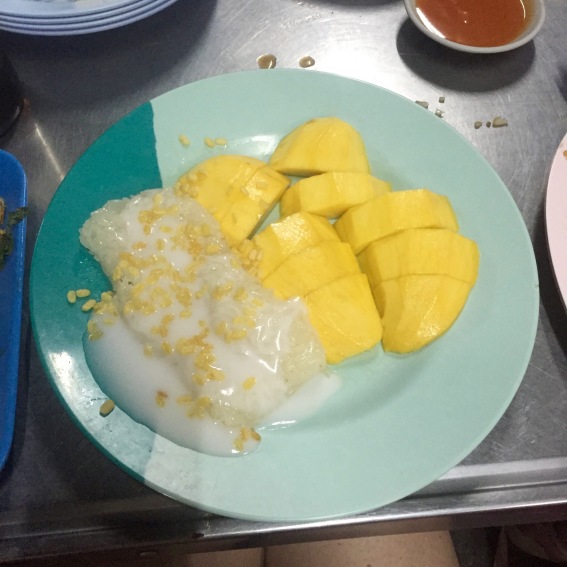 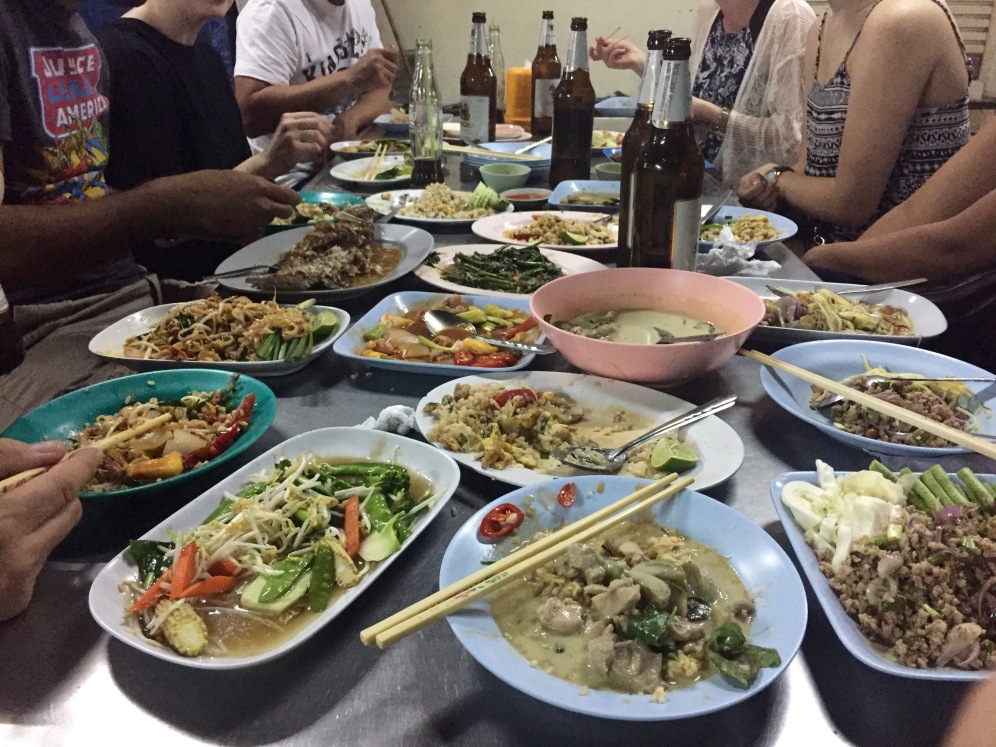 The food was AMAZING and we had so so much of it for such a small price! I chose the garlic pork ribs and shrimp fried rice washed down with a lovely Thai beer! But everyone was sharing everything so I got to try some lovely local Thai cuisine. I also tried mango sticky rice for the first time ever and I can see why people are obsessed with it, it was soooo good – I definitely want to learn how to make this myself.

The next morning I woke a lot later than expected and had missed out on going to the floating market which some of the crew had planned on doing. I was annoyed with myself as it was one thing I wanted to do in Bangkok but I really did need the sleep. Instead I went down to sunbathe by the pool and have some lunch before going to get another massage, why not when you’re in Bangkok? I also had a little wander to the local market as it was now a working day and everything was opened up! One thing I did notice was that all the school children were heading home from there day at school and they were all dressed so smartly with brief cases and hair in french braids. It makes such a difference from the school children in England.

After my Indian Head and Face massage which this time was super relaxing I decided to get one last portion of mango sticky rice as I loved it so much before heading back to nap before the flight back to Dubai.

I had such a wonderful trip in Bangkok and a new destination to put a pin on my world map on!